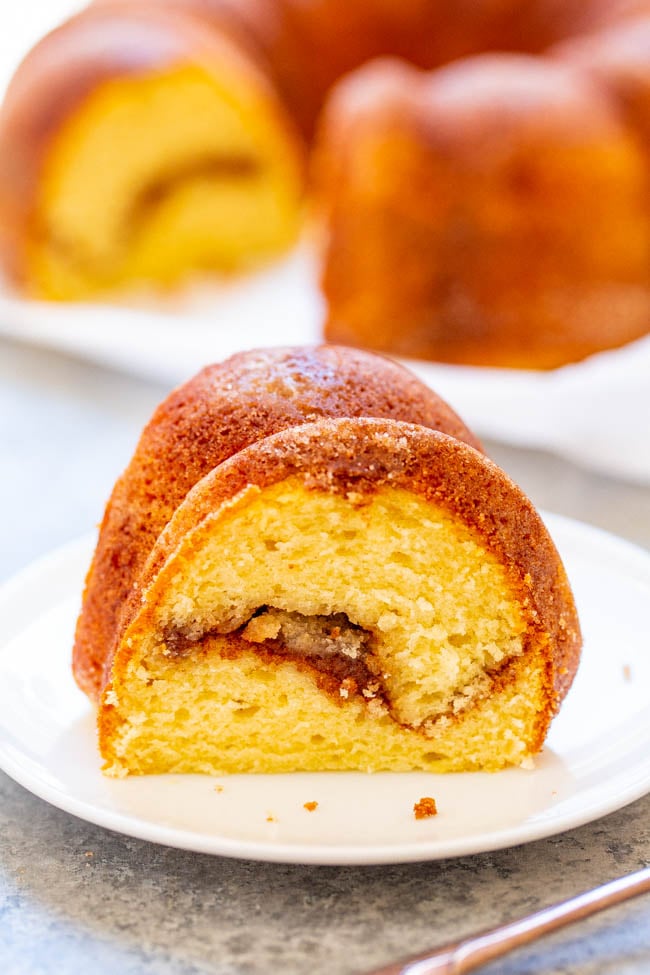 There are so many reasons to love and make this cinnamon swirl cake.

Second, there’s a ribbon of cinnamon-sugar swirled through the center of the cake. Not only is it eye-catching and pretty, it tastes damn good too.

Third, the outside of the cake has a cinnamon-sugar crust, which is accomplished simply by adding cinnamon-sugar to a cooking-sprayed Bundt pan and rolling it around. Why grease and flour a pan when you can cinnamon-sugar it instead?

There’s plenty of cinnamon-sugar in this cake and I’m not complaining, nor did anyone in my family when they tried it.

It’s also a fast, easy, and an unfussy kind of cake that comes together in minutes, the only kind I make. The bundt coffee cake is soft, fluffy, and isn’t heavy or overly dense.

There’s one cup of sour cream in the batter, which helps keep the cake light, it adds a very slight tanginess, and it prevents the cake from being overly sweet. 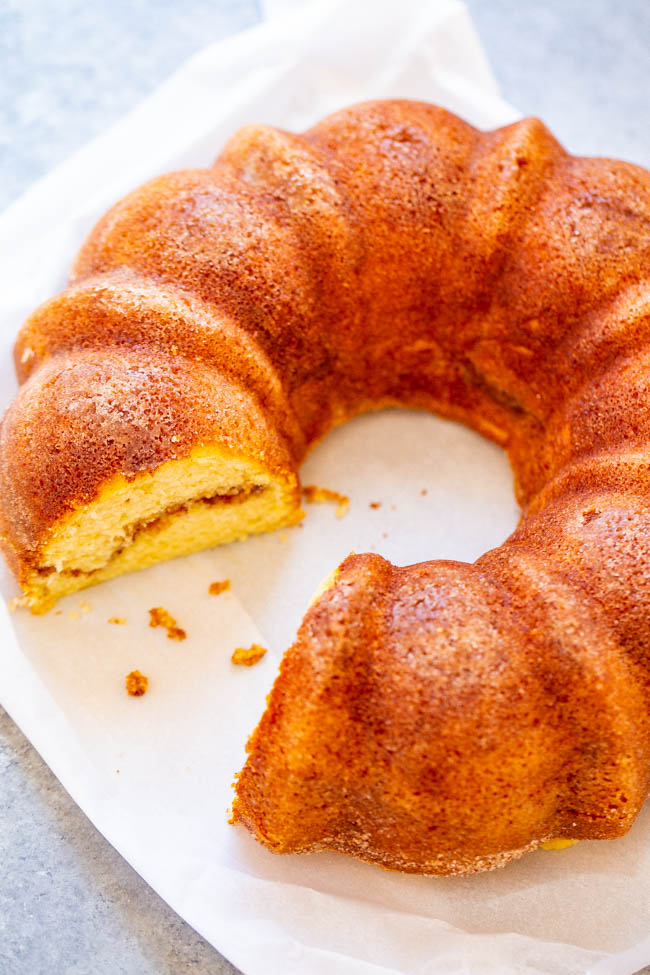 All things considered though, in a cake of this size, there’s only one and a half cups of sugar in the batter, which isn’t enough to create an overly sweet cake anyway — with or without the sour cream variable.

My daughter said the cinnamon-sugar crust reminded her of the taste of Cinnamon Toast Crunch cereal. I love that stuff so it’s no surprise I loved the cake, loved the crust, loved everything about it, including the ribbon of cinnamon-sugar swirled through the center. So good.

Between the cinnamon-sugar crust and the swirl of cinnamon-sugar in the cake, it reminds me of this Cinnamon-Sugar Crust Cinnamon Ribbon Bread from 2014 which has been a reader favorite since then. In fact, many of the coffee cakes in the Related Recipes below are circa 2013-14. Apparently I was into making lots of coffee cakes then.

It’s a coffee cake for a reason. It’s an absolutely perfect cake to be paired with your morning cup of coffee or tea.

And being that it’s not too sweet, rich, or dense, it would be a great cake for a brunch you’re hosting.

Or just have it for breakfast. Yes, cake for breakfast is always a win for me. Or have some in the afternoon with your afternoon pick-me-up cup of coffee. 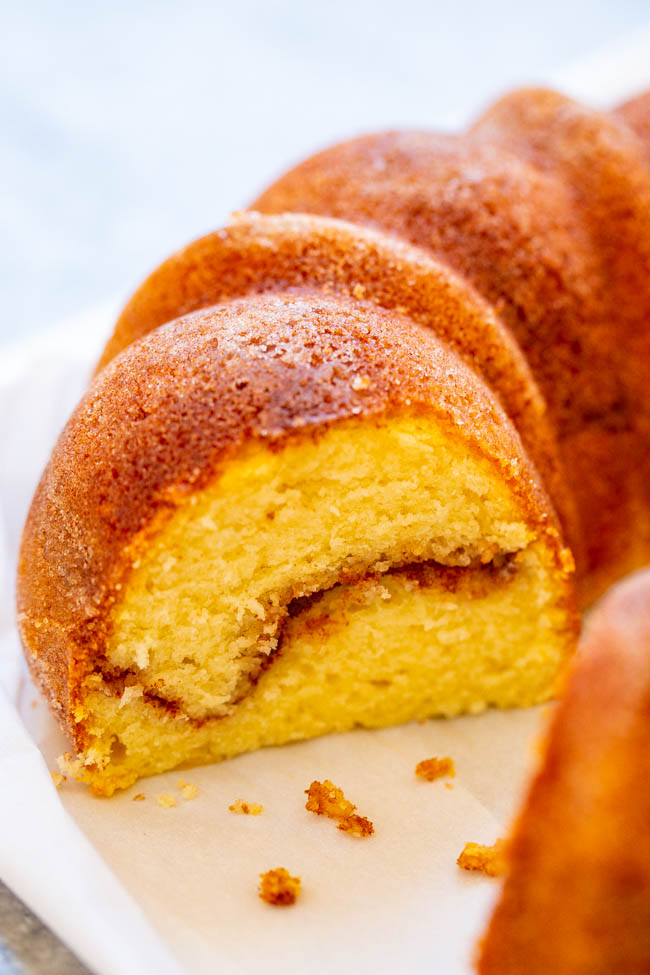 How to Make Cinnamon Coffee Cake

Turn half the batter into the prepared Bundt pan, then sprinkle the remaining cinnamon sugar over top. Pour the remaining batter over that.

Bake the bundt coffee cake until a toothpick inserted in the center comes out clean or with a few moist crumbs but no batter.

Can I Use a Sour Cream Substitute?

You may be able to use plain Greek yogurt in place of the sour cream. However, I have not tried substituting Greek yogurt so I cannot speak from experience how it will taste or what the results will be.

Can I Make This Recipe in a Regular Cake Pan?

You could possibly divide this cake batter between two 9-inch cake pans, but I haven’t tried this myself so I can’t say for sure.

When pouring the batter into the bundt pan, you first only add half of the mixture to the pan. Make sure you don’t add more than half; novice bakers tend to underestimate how much batter they’re adding, and the problem is that you then don’t have sufficient batter to properly complete the cake.

Since all ovens, pans, climates, etc. are different, I recommend starting to check on the cake at the 30- to 35-minute mark, and keep a close eye on it from there until it’s done; don’t overbake or your homemade coffee cake will be dry.

Watch your cinnamon swirl cake and not the clock and if it takes a bit less or longer for your cake to be sufficiently baked than my baking time estimates, do what is needed for your cake.

Cake will keep airtight at room temp for up to 5 days. 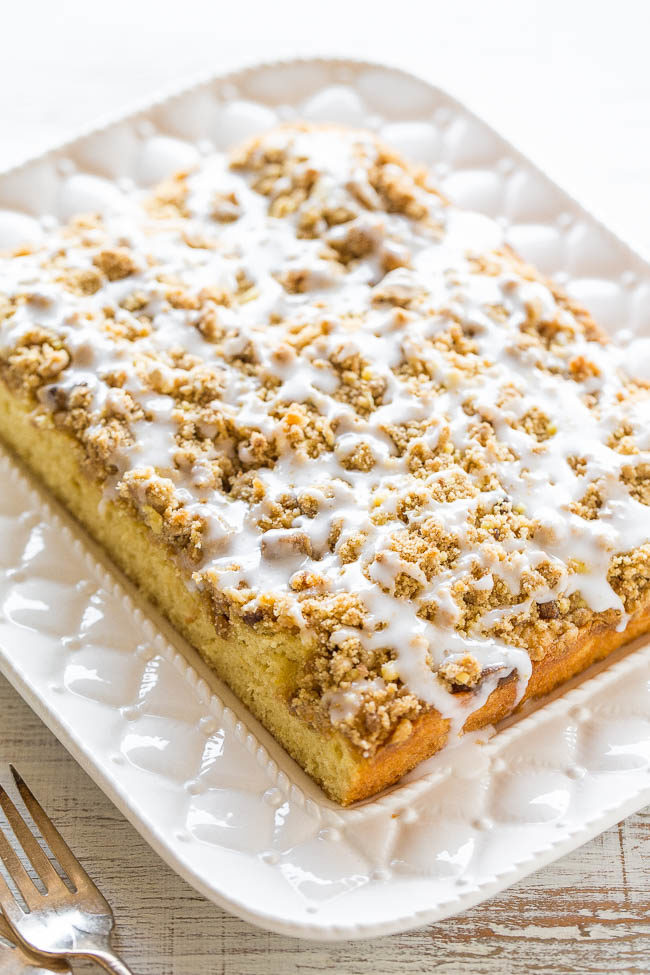 Blueberry Streusel Coffee Cake — An EASY, no-mixer cake studded with juicy blueberries and topped with big buttery streusel nuggets that are just SO GOOD!! Not overly sweet and PERFECT with a cup of coffee for breakfast, brunch, or a snack! 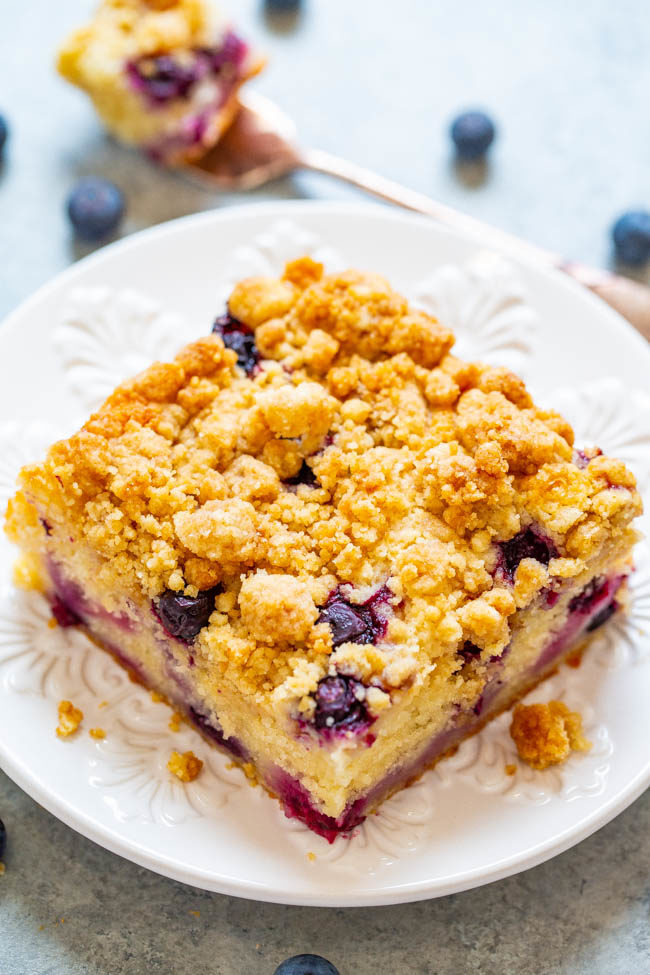 Cinnamon-Sugar Crust Cinnamon-Ribbon Bread — Even picky eaters who want the crust cut off will go nuts for this sweet, slightly crunchy crust. The interior is so soft and fluffy! 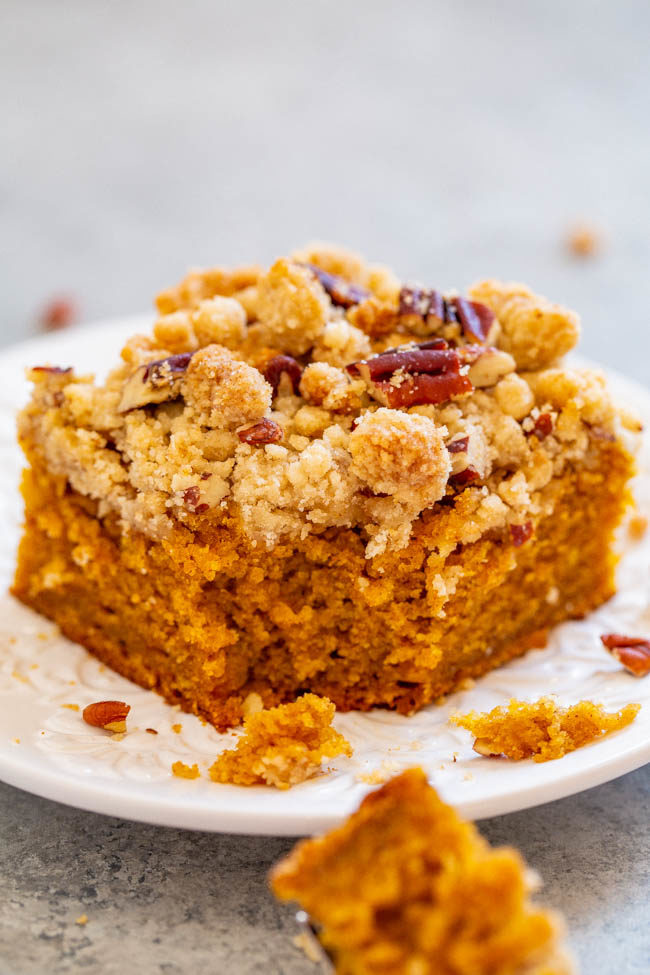 Cinnamon Roll Coffee Cake with Cream Cheese Glaze — Tastes like a big warm buttery cinnamon roll, without any of the time or effort that goes into making them!

Brown Sugar-Topped Cinnamon-Sugar Coffee Cake with Vanilla Cream Cheese Glaze — Fast, easy, no mixer, and the cake is soft and fluffy, with a slightly crunchy topping, and the drippy glaze seals the deal! 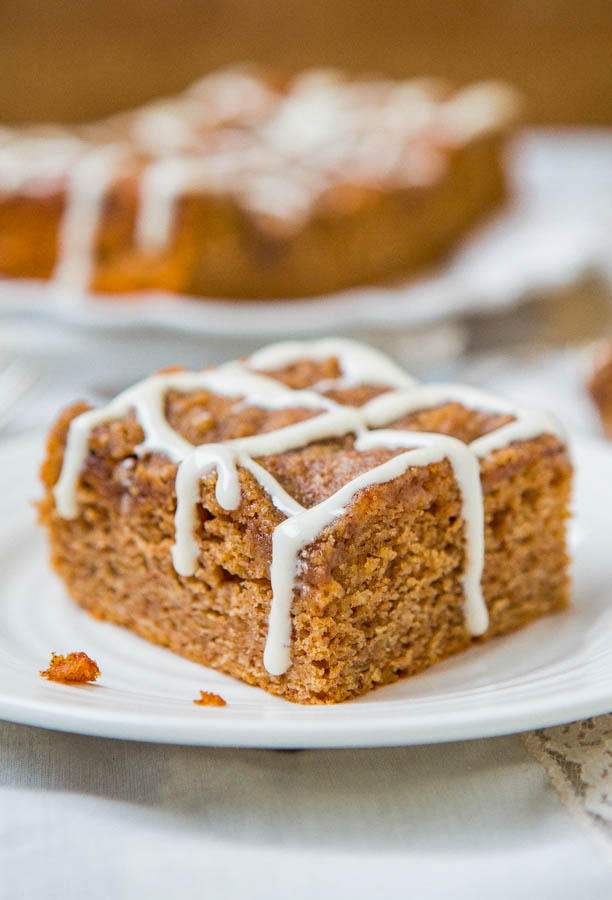 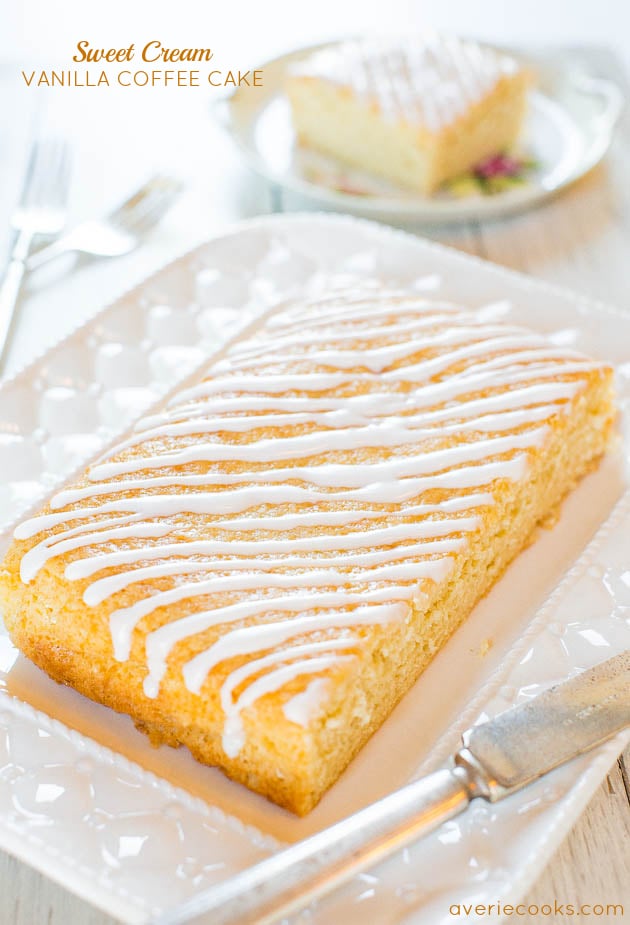 Glazed Cinnamon Roll Cake — The flavor of cinnamon rolls in a soft, tender, EASY cake!! One bowl, no mixer, and you’re going to love the tangy-sweet GLAZE!! 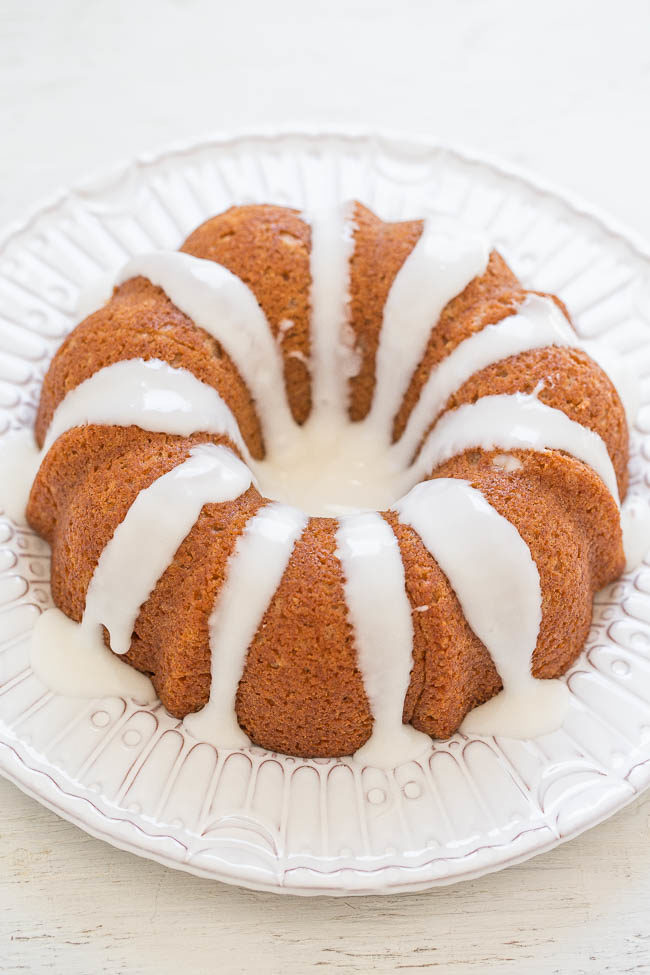