I mentioned on Monday that I had a really hard time getting out of bed, that it was raining, and that it was just one of those mornings.

But the show went on and I dropped Skylar off at school, went for a run, did errands, handled life, blogging, cooking, photography, phone calls, and before I knew it, it was 2pm and I hadn’t had coffee. 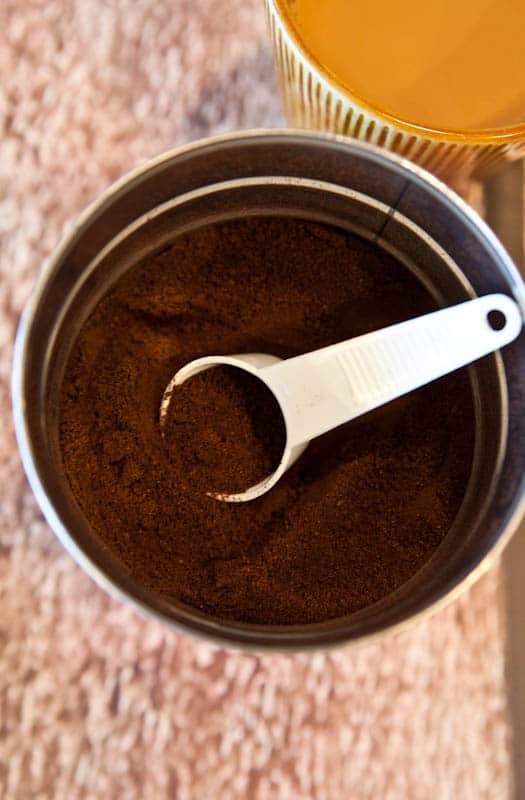 And I was in caffeine withdrawal.

I turned on my coffee maker and it wouldn’t make coffee.

Surely this was a very cruel joke played by the Coffee Gods on a rainy Monday to someone who’d only gotten through her day on mental promises that a cuppa ‘joe was just around the corner.  And yes, I play mental mind games with myself such as, Respond to these 20 emails, then you can have a second cup.

After begging with my old coffee maker, asking it nicely, and pleading gently with it to just make me one more pot, I realized it was dead.  Recently, I sensed it was on its last leg because it was loud, clicking, and seemed a little temperamental.

It was an older version of this model and I made thousands of pots in it in the four years I had it. 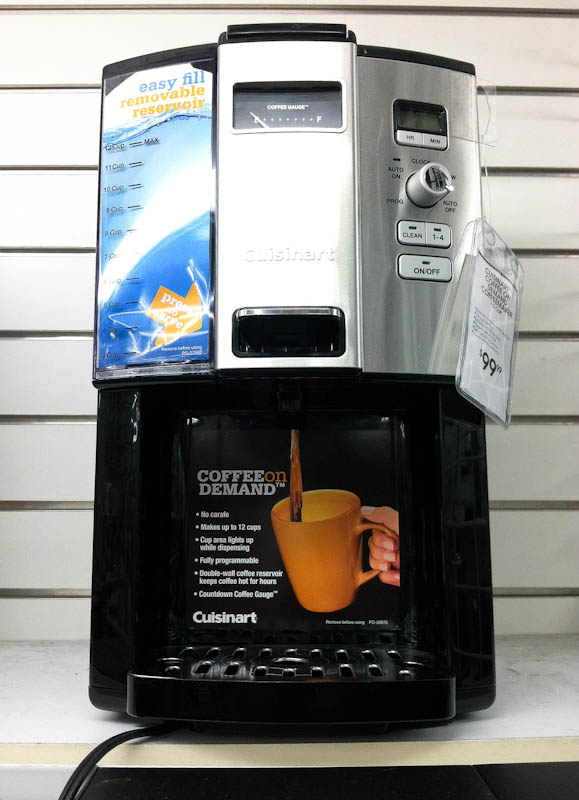 I liked the carafe-less feature (no glass to break or stainless pots to get spots on i) but just pushing a lever and having coffee dispensed didn’t work out as easily because I usually put my coffee in a tall to-go-cup, and the go cup didn’t fit under the lever dispenser so I’d have to pour coffee into a cup into a short cup and then dump two short cups into my one tall go cup.

After it was evident that my machine was a goner and wasn’t going to brew just one more pot for me, I drove to Coffer Maker Heaven, aka Bed Bath & Beyond. 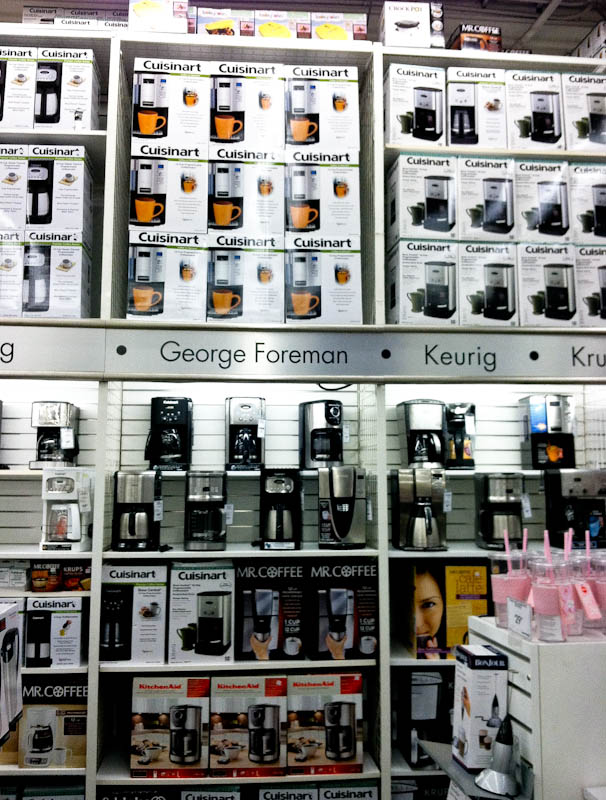 Good thing I hoard a stash of BB & B coupons and they never expire.  (Most stores will allow you to cash them in but it is up to the store’s discretion.  At probably over 20 BB & B stores in about 10 states, I’ve never been denied.  I have been told by a few readers their store is a stickler for rules and won’t redeem expired ones, but that neighboring stores allow it.) 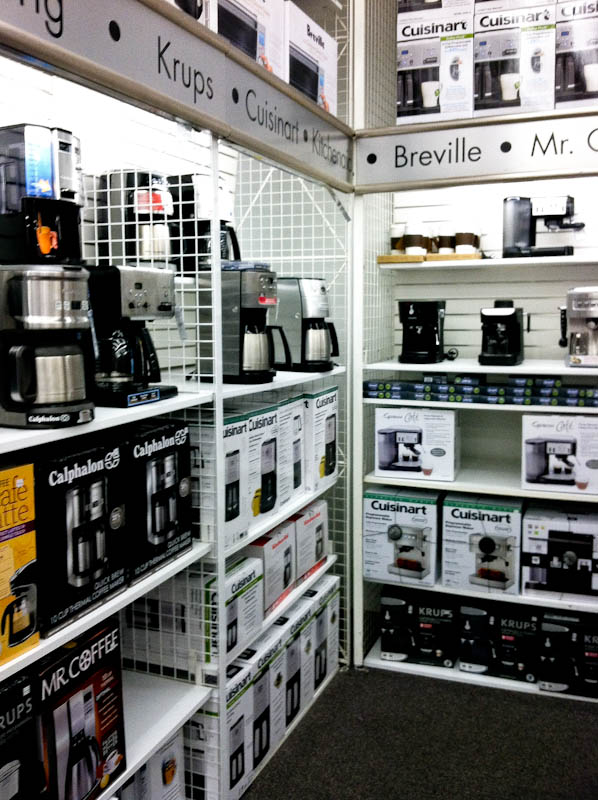 Just what I didn’t need was shopping for an appliance when all I did need was coffee. 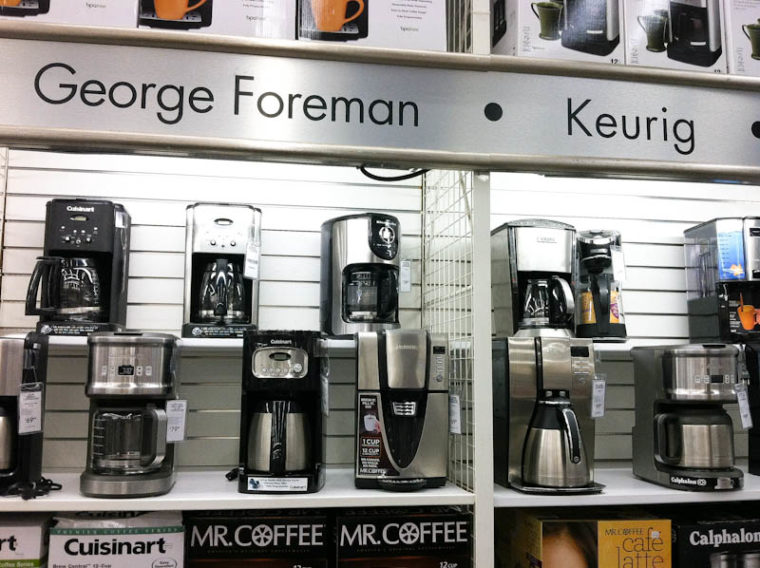 It was an ironic twist seeing all the coffee makers but not a drop of coffee. 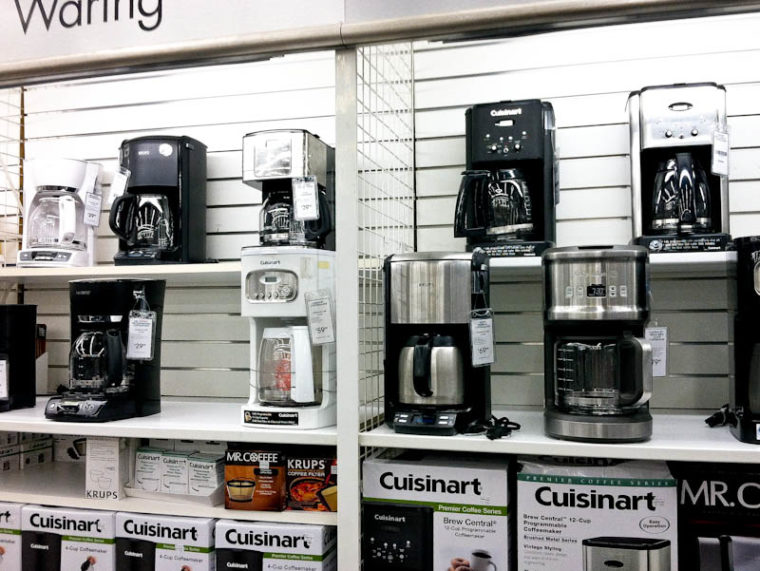 There were more expensive ones that ground beans and gave you a foot massage while you waited for your coffee.  Or something like that. 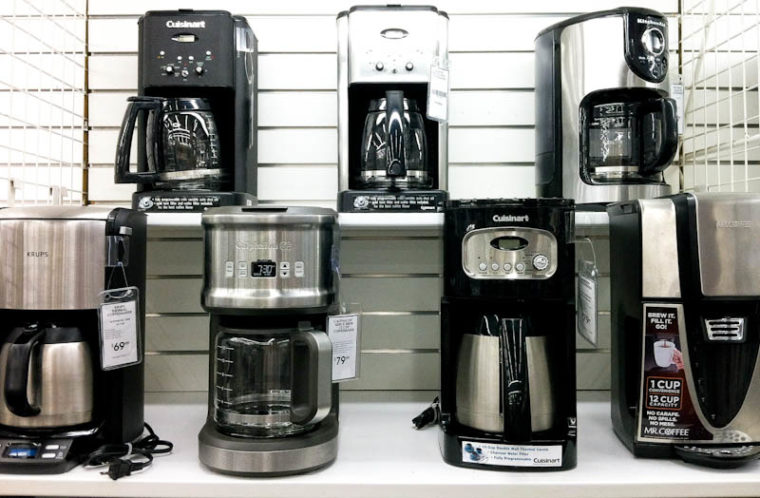 But I really didn’t want anything too fancy.

The shorter the height of the machine, the better given my limited kitchen storage space.

I wanted a 12-cup maker, but didn’t care if it had a glass or stainless carafe, nor if it was program-able, or had autoshutoff.

So I debated between these three 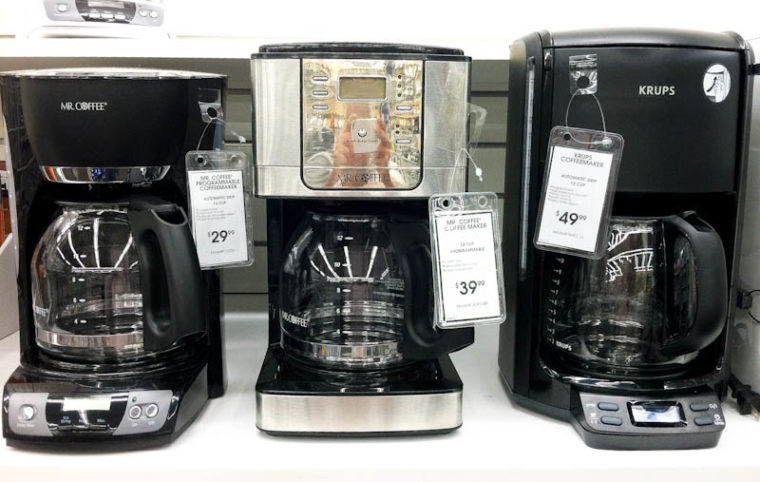 And I got this one. 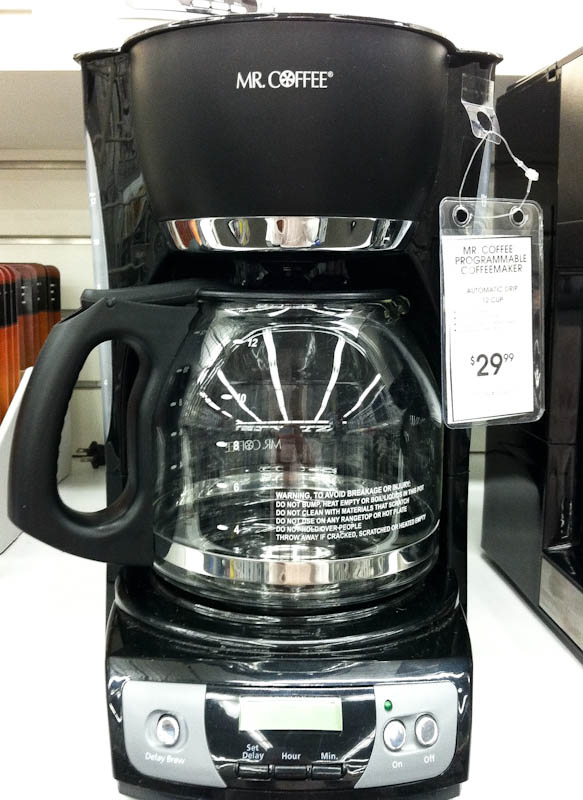 It makes 12 cups, is shorter in stature than most and fits underneath my cupboards on my countertop much better than my old one did. 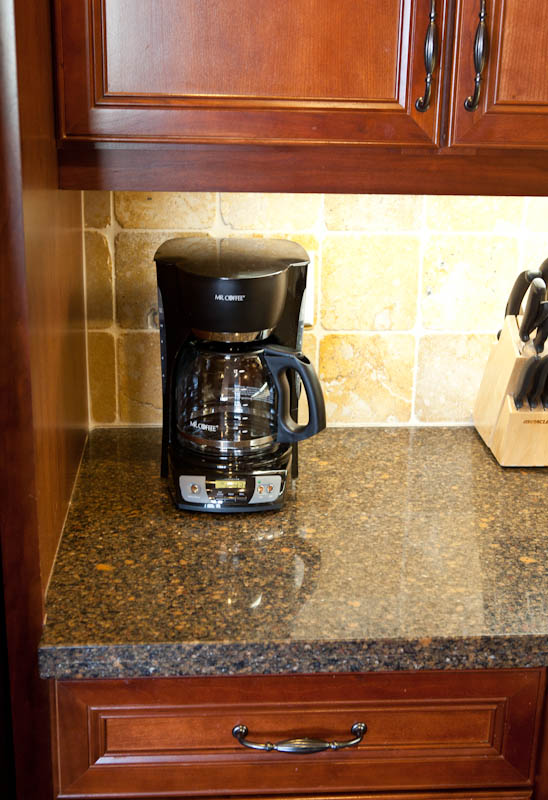 Plus, I like that it’s not too fancy.  I don’t need a high tech coffee pot because when I need coffee, I don’t want too much tech.

I’ve only made one pot from it, but the coffee was just fine. 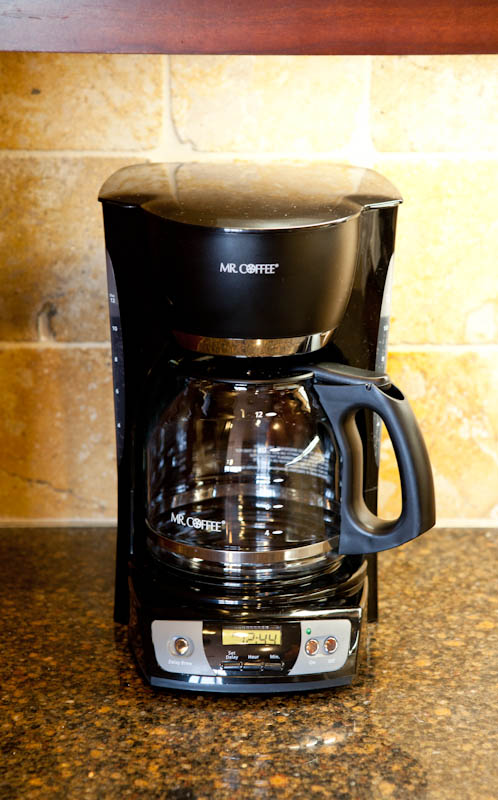 This is what I brewed.

And I slurped it down.

Ironically, I just did a post about coffee last week

Excuse me while I have a Chocolate Peanut Butter Oat Square (No-Bake, Vegan, GF) and enjoy some more coffee. 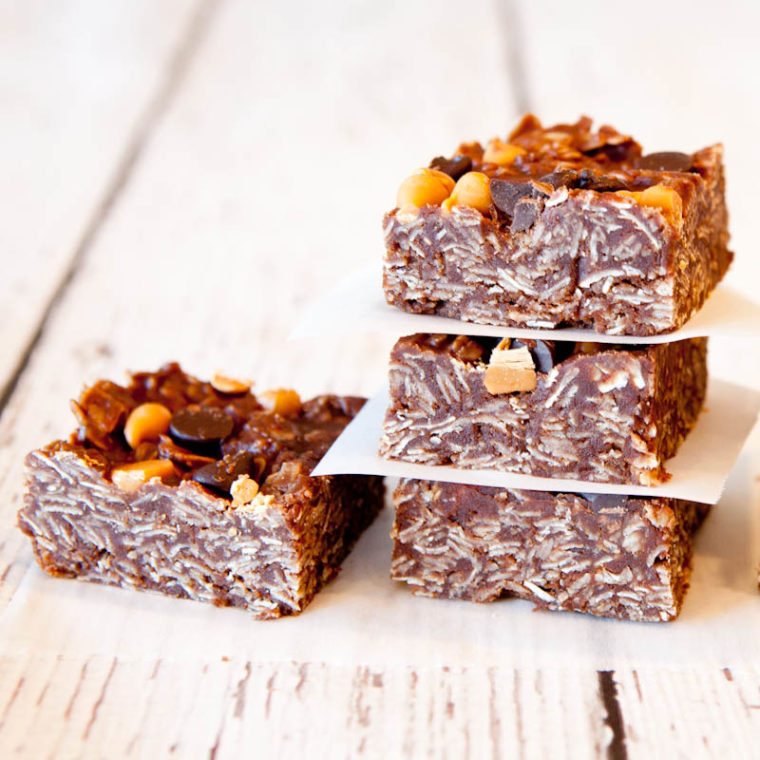 Do you have a coffee pot that you love?  Do you think brand, price paid, or other factors impact the taste of the coffee?

I bought an espresso maker (which also makes coffee but it’s not as convenient as just making a pot of coffee and I rarely use it; along with the juicer and dehydrator I rarely use.

For me, it’s the type of coffee more so than the brand of coffee maker that seems to make the most difference.

What’s the last appliance you bought?

This Lovely Lady was my last prior to the coffee maker. 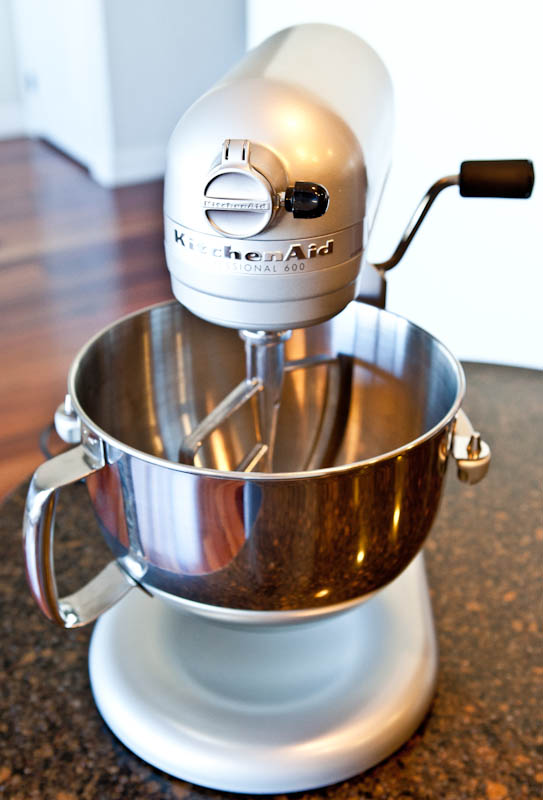 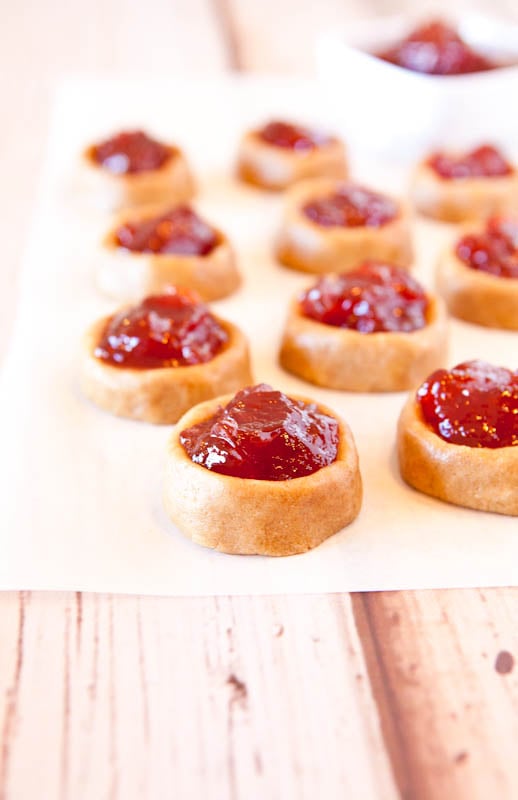 Thanks for the Chobani Yogurt Giveaway entries