I used to think people who did juice cleanses were a little crazy.

Well, last week I entered the world of crazies and did a three-day juice cleanse along with my husband. At least we’re crazy together. 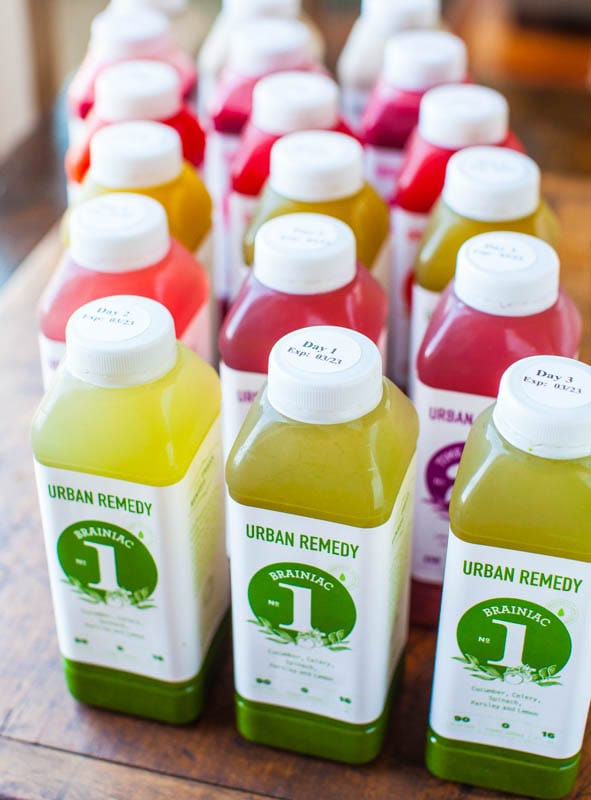 I briefly mentioned that I was doing a cleanse and the biggest reason why is because I wanted to hit the reset button. I’m largely a desserts blogger and I make and eat sweets, desserts, treats, and sugar 365 days a year and I sample it all. Some recipes I sample more than others.

For 3 days, I wanted to give my body, mind, and spirit a break and chance to allow it to re-center, realign, and restore. Like pressing the reset button.

My husband, Scott, had been talking about wanting to do a juice cleanse for ages and we decided to try Urban Remedy’s Three Day Signature Cleanse together. 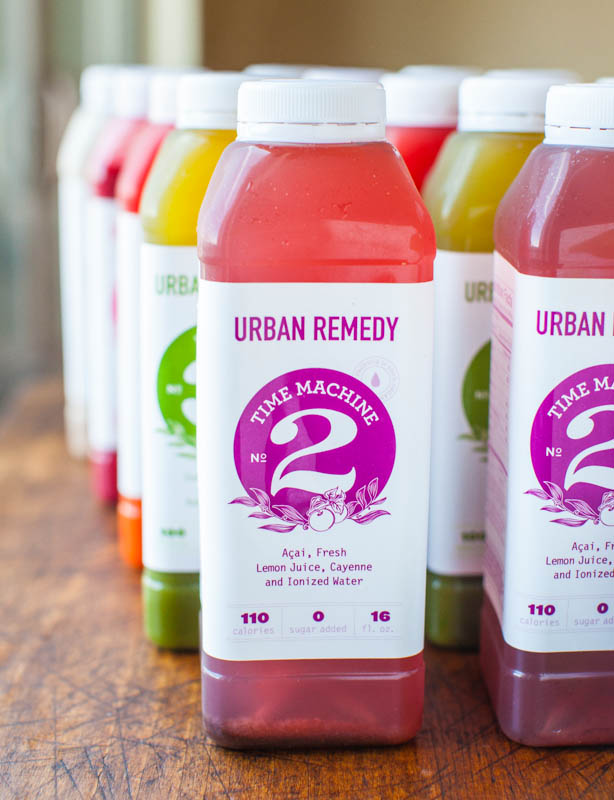 For a few days leading up to the cleanse, you’re supposed to eat as high raw and vegan as possible. No caffeine, alcohol, watch your sugar, processed foods, gluten intake, and common sense things that will make the transition to juice-only for three days as graceful as possible.

I estimate that 80% or better of my diet is very clean and is vegan, lots of raw foods, gluten-free, and so forth. The other 20% is worlds apart. I don’t deny myself sugar, chocolate, coffee, treats or what I’m craving. But going into the cleanse, both of us really cleaned up our acts, including that pesky 20% stuff. The one thing I couldn’t eliminate was my coffee intake. I’m hopelessly addicted to caffeine.

The juices arrived at 10am on our start day and every three hours or so, you’re supposed to drink one bottle. The bottles are 16-ounces each and there are 6 bottles per day. They’re labeled one through six, drink them in order.

The total daily caloric intake per day is about 1250 calories. However, as the Urban Remedy site indicates as well as other authorities and experts on juicing, 500 calories of juice is almost all usable calories; whereas 500 calories of a bagel and cream cheese is not. It’s like mainlining pure nutrients so you require less, in theory. 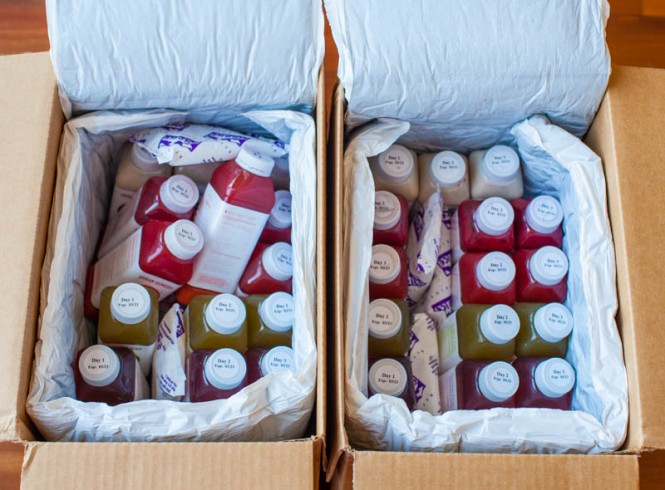 If you’re wondering, neither my husband or I lost any weight. We both thought we would, but mathematically after I stopped to think about it, it’s not likely to pencil out. For example, if on an average day I consume about 2000 calories (I don’t count but am just guessing here), and on the juice cleanse I consumed 1250, that’s a 750 calorie per day deficit. Over 3 days, that’s a 2250 calorie deficit. One pound of fat = 3500 calories. So, mathematically you’d have to juice for awhile to lose true fat.

And with all that liquid we were drinking, we didn’t find we were losing water weight either. Everyone’s experiences vary, and we didn’t go into this to lose weight, but neither of us did.

On Day 1, we both did well during the day. By dinnertime, I was going through gnarly caffeine withdrawals. I had a pounding headache and was also cold from drinking cold juice all day. Although you’re not ‘supposed to’, Scott told me he drank a small coffee when he was out and that it helped him tremendously. I had a cup of warm herbal tea, which is reluctantly ‘allowed’. It wasn’t coffee, but it was warm and it got me over the hump.

Drinking the last juice of the day, which is more like dessert-in-a-bottle, was enough fat and substance for me to hop into bed and sleep like a baby. 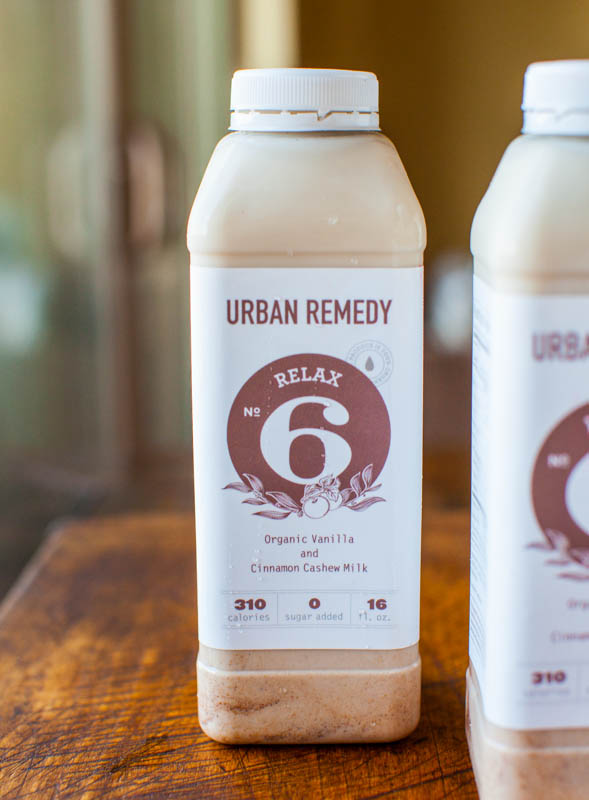 On Day 2 both Scott and I were up and down, hour by hour, as to how we felt. Some hours were good, full of energy, not hungry, really thriving. Other hours were hard and we’d text each other ‘So hungry I want to eat my arm off’. By evening, after going 48 hours without any solid food and my caffeine withdrawals as bad as ever, I had a small cup of coffee and a rice cake. It was the best tasting cup of coffee and the best tasting rice cake of my entire life. Those two very small things were enough to propel me into Day 3 with zest.

I woke up on Day 3 ready to tackle the world and did great the entire day. I had been going for runs each day because I am a lifelong runner and it centers me and helps me quiet my mind. When I don’t run, I am a mess. The last thing I wanted to do was give up my runs while trying to get through the cleanse. I didn’t have as much energy as usual and ran much slower and gentler than normal on the first two days, but on Day 3 I powered out a great run. By the time nightfall came, I was ready to go to bed, knowing that when I woke up on Day 4, I was going to eat!

Overall, I feel the cleanse gave my body a chance to reset and in the week since the cleanse I’ve been eating less sugar, less processed snacks, and more fruits and vegetables. I’ve drank far less coffee, probably 50% less than I had been drinking, and I am more mindful of what I’m putting in my body. The cleanse provided an opportunity to re-examine food choices and habits and make tweaks and adjustments accordingly.

My husband particularly loved it. He felt like it gave him mental clarity that he otherwise wouldn’t have gotten. In removing solid food, your senses really heighten and hone; smells, sights, experiences, and everything is intensified. He said it helped him realize that he doesn’t need to have a bagel with cream cheese, an apple, a banana, a glass of juice, and a cup of coffee all before 10am. He rationally knew this, but said actually doing the cleanse proved that he would be fine without it. Ironically, this week he went out of town for the week to a Transcendental Meditation retreat. This is not the man I married 13 years ago and watching his evolution into a juicing, meditation man has been a gift for me. And it all helps makes him the most patient Daddy ever.

If you’re interested at all in doing a juice cleanse, just do it. You have nothing to lose. If you get wickedly hungry after the first day and want to eat, do so. There are no absolutes. This is your body and you shouldn’t feel shame, guilt, or negative if you have to tweak the cleanse in order to get through it.

That said, three days was definitely my maximum. I wanted to chew, I missed solid food, and something about just juice and all the liquid left me feeling full, yet vacant and unsatisfied. However, it’s suggested that the more cleanses you do, the easier they get and that the first couple days are always the hardest.

We went with Urban Remedy rather than making our own juices and I cannot say enough good things about them. The juices are just so very good, and the more you drink them, the more you want to drink them. The juices are made without adding sugar, compared to many other companies who do, and they also don’t use much agave. Everything is organic, made fresh before shipping, and they make the whole process as easy and effortless as cracking open your next bottle. They have different levels of cleanses and we went with the signature and they have deeper and harder core cleanses and you can cleanse for as many days as you choose.

My favorites were Number 6 (cinnamon cashew milk with vanilla) – What’s not to love. It’s like dessert, complete with 310 calories and about 35 grams of fat in the bottle. Nuts are not low-fat. This is the juice I had have in order to make it through the day as it’s the only significant fat or protein source. 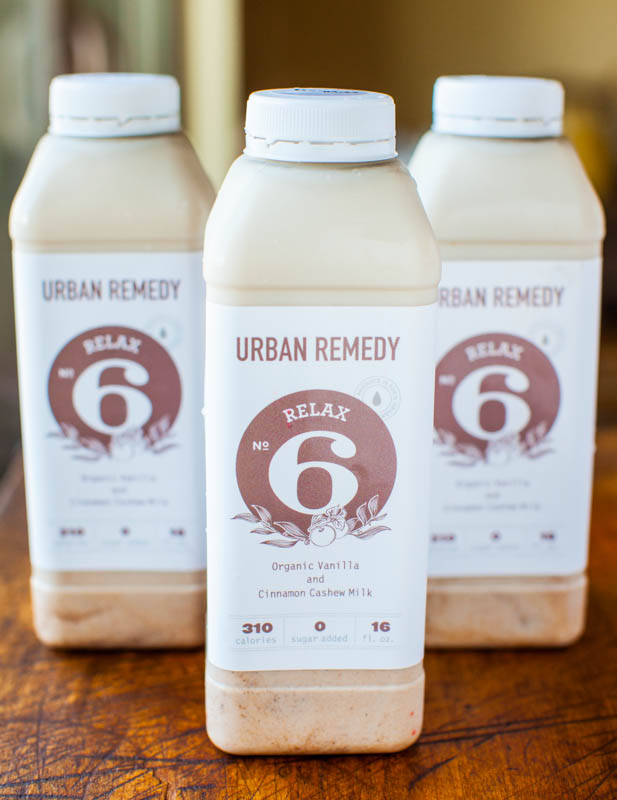 And Number 4, After Party (beet root, carrot, ginger, apple and lemon) was my other favorite. I chugged this juice every day in like 15 seconds. Loved it. 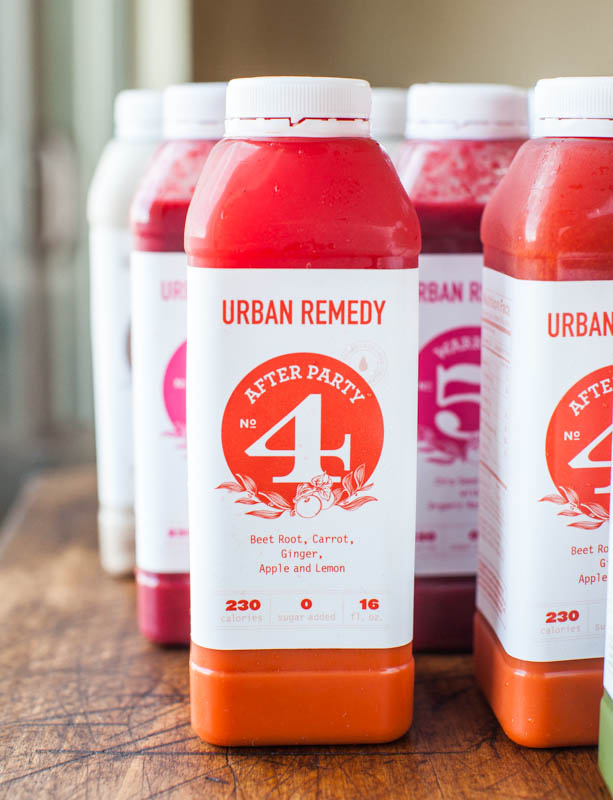 I also really liked Number 3, Flush (cucumber, mint, ginger, apple, and lemon). At first Scott said he hated this one but by Day 3, he liked it. I liked it on Day 1 and on Day 3, I loved it. 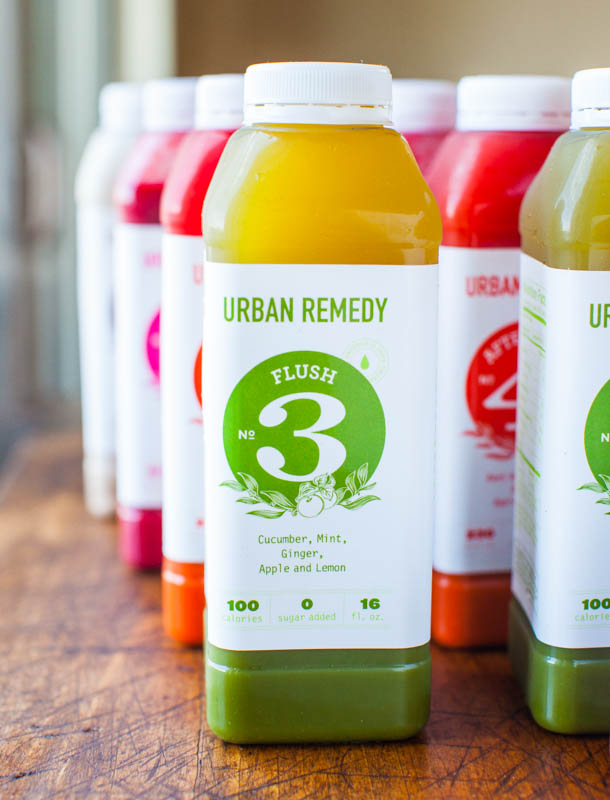 The only downside to Urban Remedy or other companies who provide juices to your doorstep is that it’s not cheap. It’s about $60 per day, per person. Each bottle of juice is $10.

Not to mention, I am woefully under-researched in the how-to-put-a-successful-cleanse-together department and having the guesswork taken out was beautiful. I stocked the fridge and we drank them in order. 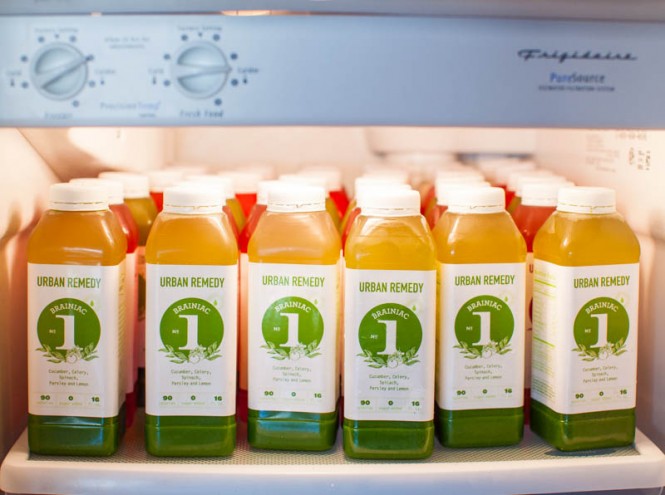 If you want to start juicing, I recommend checking Craigslist or Ebay for used juicers until you know it’s something you can see yourself sticking with. Cleanup is time-consuming and it’s not cheap to juice because you need so much produce in order to produce a significant volume of juice, very different than smoothie-making in a Vita-Mix or blender where you use everything, pulp and all in say a Tropical Green Smoothie 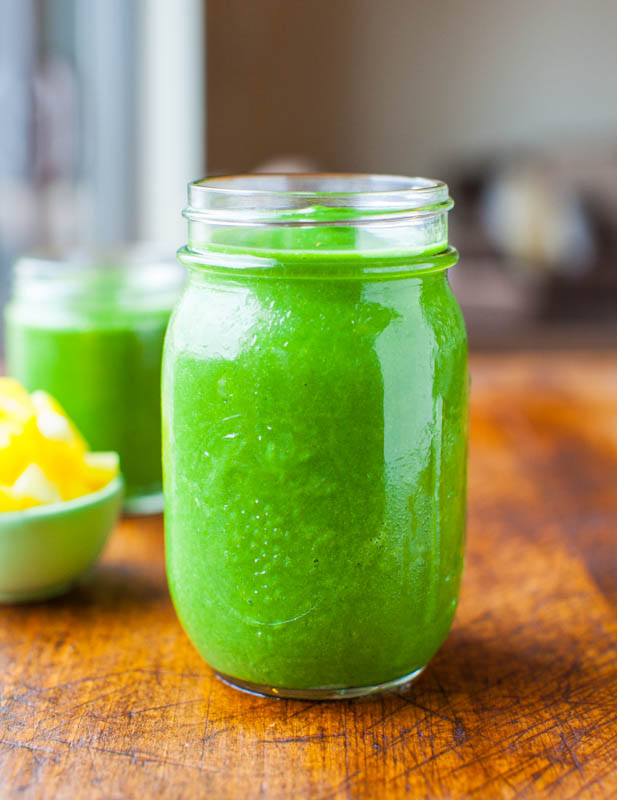 and although it’s fine as juicers go, cleanup is still tedious.

Will I do another cleanse? Yes, one day. And now that I know what it’s like, I can better prepare for it, including trying to eliminate coffee beforehand, which was the hardest thing about the cleanse for me. Not the lack of food, but the lack of caffeine.

Scott told me that he wants to try a Five-Day next time. 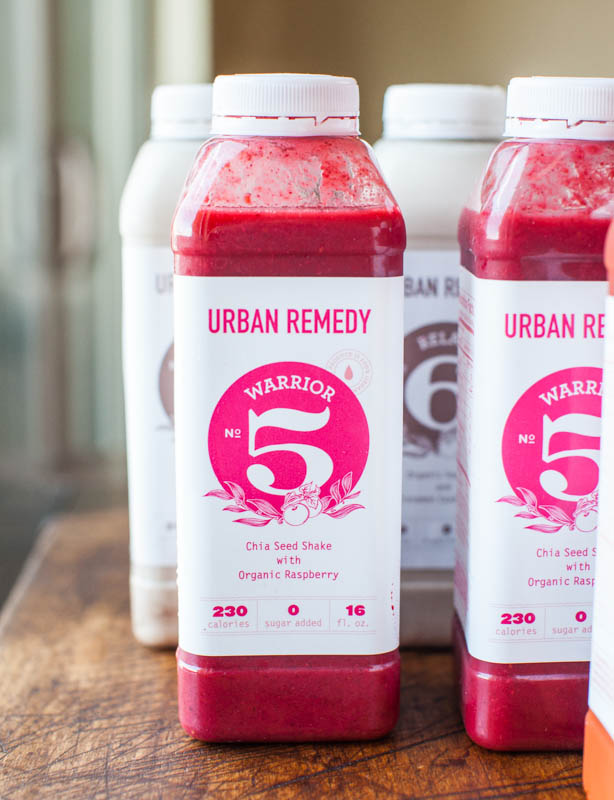 Have you ever done a juice cleanse or juice fast? Any interest?

What do you do when you feel like you need to press the reset button? What helps you get back or stay on track?

This post was written to share our experiences on the cleanse. In no way am I am expert on juicing, and this is not intended as medical advice. I am not telling you to juice or not to juice and am unable to answer detailed medical questions about if I think juicing would be a good idea for you. Do your own homework and research.

Posted in: All Recipes, Beverages, Juice