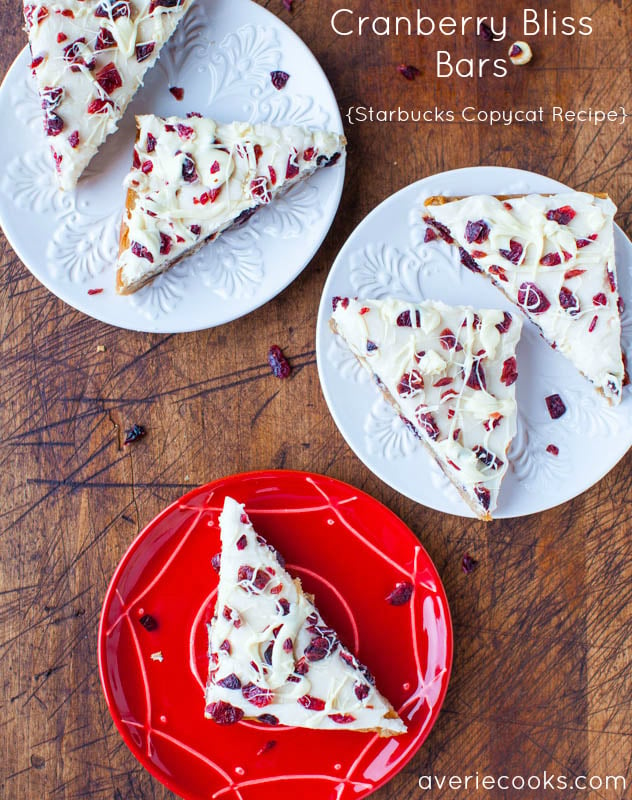 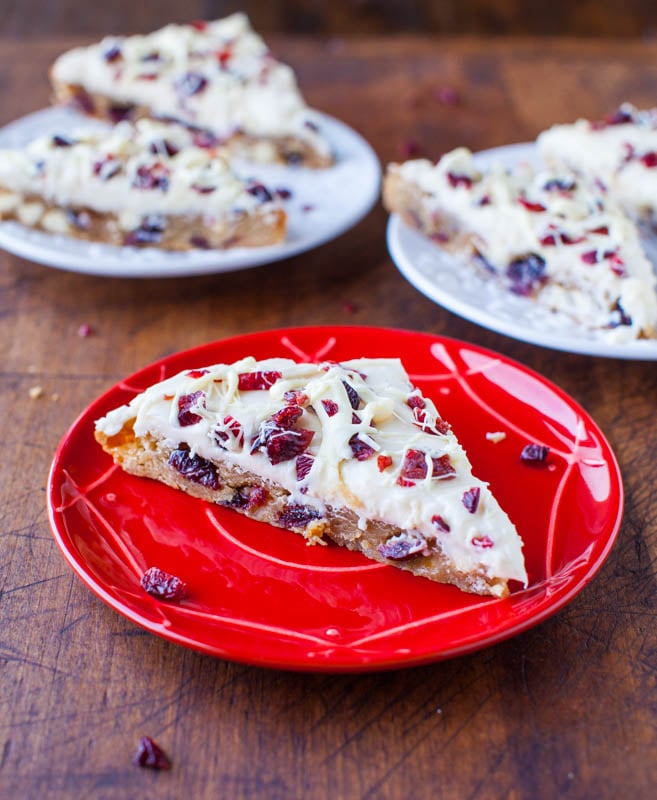 I have two white chocolate blondie recipes, this one, which uses a bit of baking powder in the base, creating a fluffier and more cake-like blondie. And then my preferred blondie recipe, which doesn’t use any leavening.

As with brownies, I like my blondies denser and less cakey. So I tweaked my preferred recipe by adding cranberries and kept the white chocolate chips to create the Bliss Bar base.

Hands down, I prefer these to Starbucks. My family also loves Starbucks Cranberry Bliss Bars but they preferred the homemade version. When we tried to analyze why we liked these better, all we could come up with is that they have a homemade taste, rather than a commercialized, mass-produced taste. Sometimes the exact nuances why one item is preferred over another isn’t always perfectly well-defined and you just like what you like. 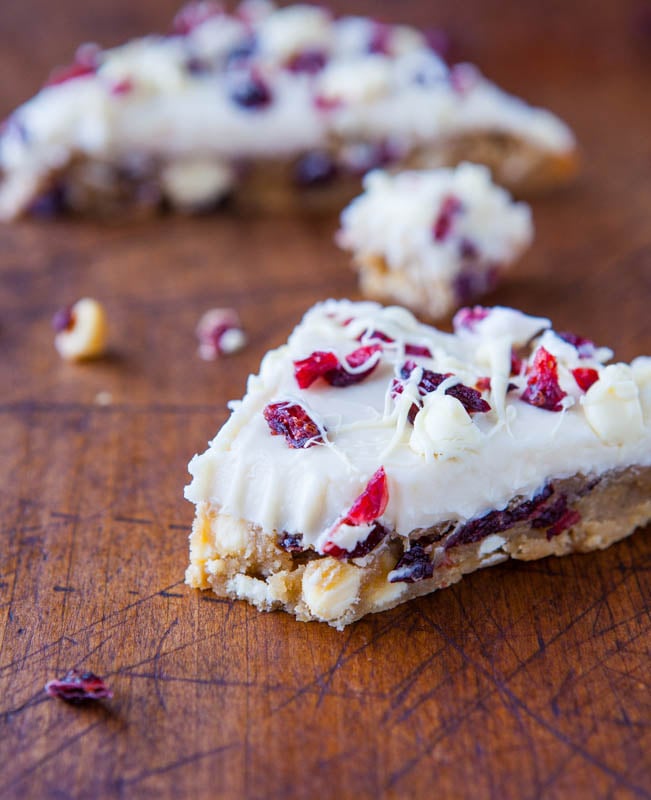 Homemade frosting always reigns supreme to store-bought and with the Bliss Bars in particular, the frosting really makes them. I adore cream cheese frosting, especially when it’s been beat to submission with the inclusion of melted white chocolate.

Layering this heavenly goodness on just a bit thicker than Starbucks does is the beauty of making these, or anything, at home. You can customize it to your liking, and for me, that will always mean extra frosting. I’m one of those people who likes a little cake with my frosting or a few crackers with my bowl of dip. 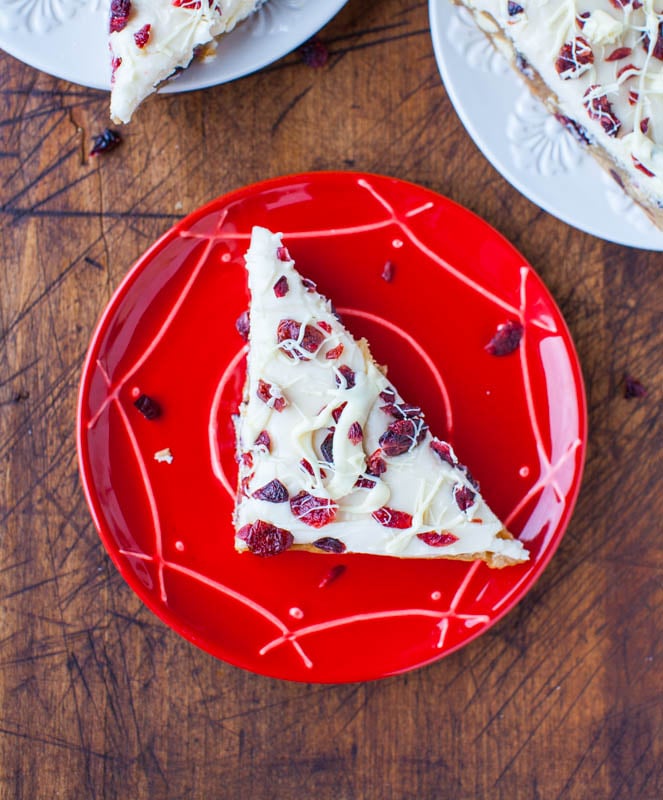 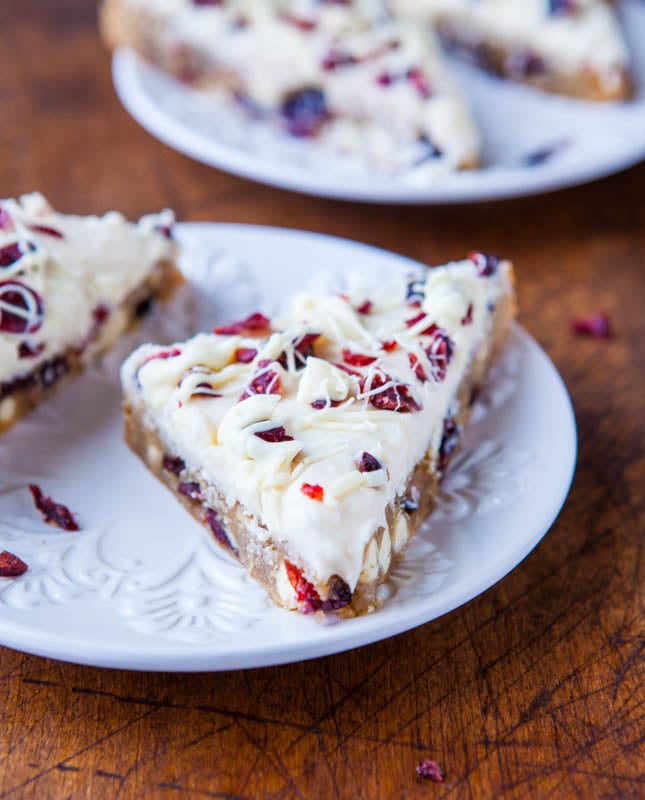 How to Make Cranberry Bliss Bars

It’s a very simple batter that comes together in less that 5 minutes by hand based on ‘ones’. Melt one stick of butter, add one cup brown sugar, one cup flour, one (and a half) teaspoons vanilla, and stir. Stir in the dried cranberries and white chocolate chips and it’s ready to be baked.

While the bars bake and are cooling, make the white chocolate-spiked cream cheese frosting. The frosting is where the magic happens and catapults this recipe from white chocolate and cranberry blondies to copycat Cranberry Bliss Bars and it lends so much authenticity to the bars.

To make it, melt one cup white chocolate chips. Place the white chocolate in a microwave-safe bowl, heat on high power for about 30 seconds, stop and stir. Then heat in 10-second bursts, stopping to stir after each, until the chocolate can be stirred smooth, being patient with it and not allowing the mixture to get too hot or it will seize up and you’ll need to start over.

You can also melt white chocolate over a double boiler, however I find this to be more work and have no issue using the microwave, but to each her own and melt it in whatever way you’ll have success. 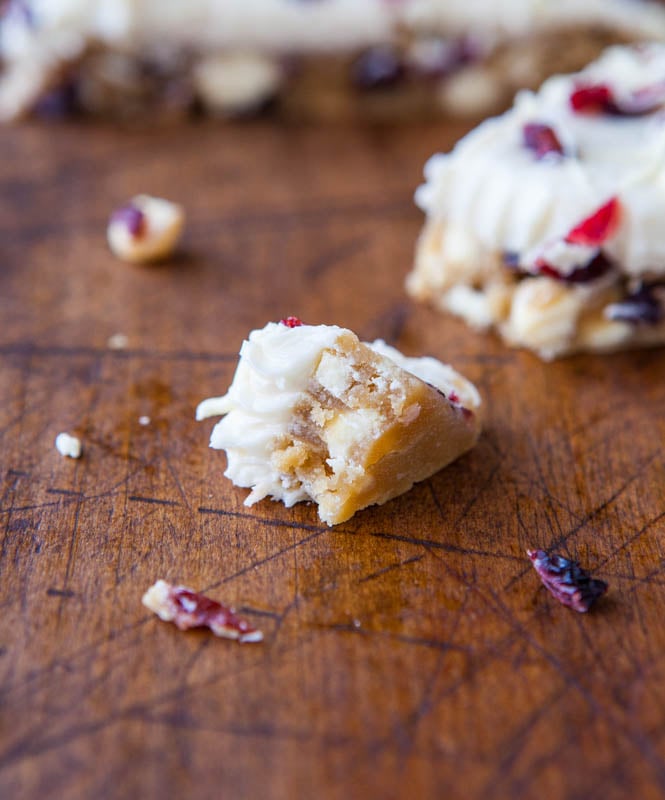 Add about three-quarters of the melted white chocolate to a fluffy pile of confectioners’ sugar, vanilla extract, and four ounces of cream cheese that’s waiting in a mixing bowl. You may use whipped or light cream cheese, you know, to save calories so you can eat more.

Beat this mixture together until it’s very fluffy, playing with the confectioners’ sugar ratio as necessary, adding an additional dollop of cream cheese or splash of milk if it becomes too thick. The mixture will start out thick but keep beating, for at least three minutes, and it will magically fluff up. Spread the fluffy, creamy goodness over the cooled blondies. 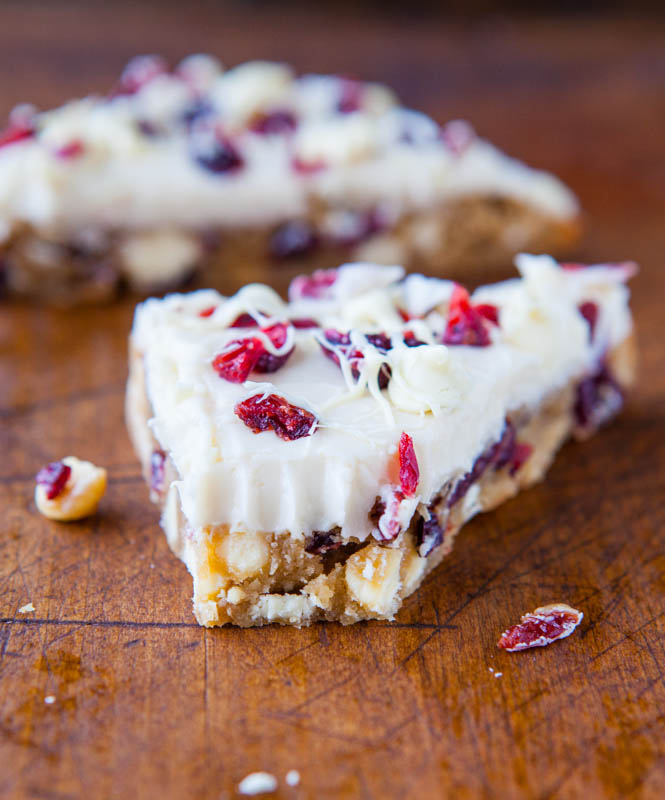 How to Slice the Bars

It’s best to allow the bars to set up for about 30 minutes before slicing into them, because it will make the job easier, neater, and they’ll look prettier and more authentic.

To slice the bars, lift them out using the aluminum foil overhang, because yes, you were smart enough to line your pan with foil before beginning, making this stage of the game a cinch and it makes cleanup effortless, too.

Slice the bars by making a cross, creating four small squares or quadrants. To each of the four quadrants, slice on the diagonal to create two triangles, for a yield of eight triangular-shaped bars. They’re generously-sized, very similar in size and shape to the Starbucks version, but the beauty here is that this recipe makes just eight bars, since it’s baked in an 8-by-8-inch pan.

I have not tried doubling the recipe, and in theory, doubling and using a 9-by-13-inch pan would probably work, but I haven’t tried. Eight of these puppies in one batch was plenty, eating 16 of them before the frosting gets a little too crunchy or dried out would have been overkill for our family of three.

The batter is fairly shallow in the baking pan and it bakes up quicker than you may think, about 18 to 20 minutes. Even a few extra minutes of baking time will create a much more dried out bar, ruining the bliss.

I find the secret to commercialized chain-store successes like Mrs. Field’s cookies, Cinnabon cinnamon rolls, orStarbucks Cranberry Bliss Bars is that none are overbaked; all are ooey, gooey, and chewy. Keep that in mind and pull the bars from the oven as soon as the top is set. It will be a pale golden hue.

When melting white chocolate — I cannot stress this enough — it scorches easily and melts twice as fast, if not faster, than milk or semi-sweet chocolate chips so go slowly and in little bursts.

For the Frosting and Topping

For the Frosting and Topping:

Storage: Bars may be stored in an airtight container in the refrigerator for up to 1 week.

To keep gluten-free: use your favorite gluten-free flour blend, taking care that all other ingredients used are acceptable for your dietary needs.

Cranberry White Chocolate Chip Bliss Cake — This fast, easy, no-mixer cake is light, soft, fluffy, and moist. It’s springy and bouncey, with just enough density to give it some heft and dimension. 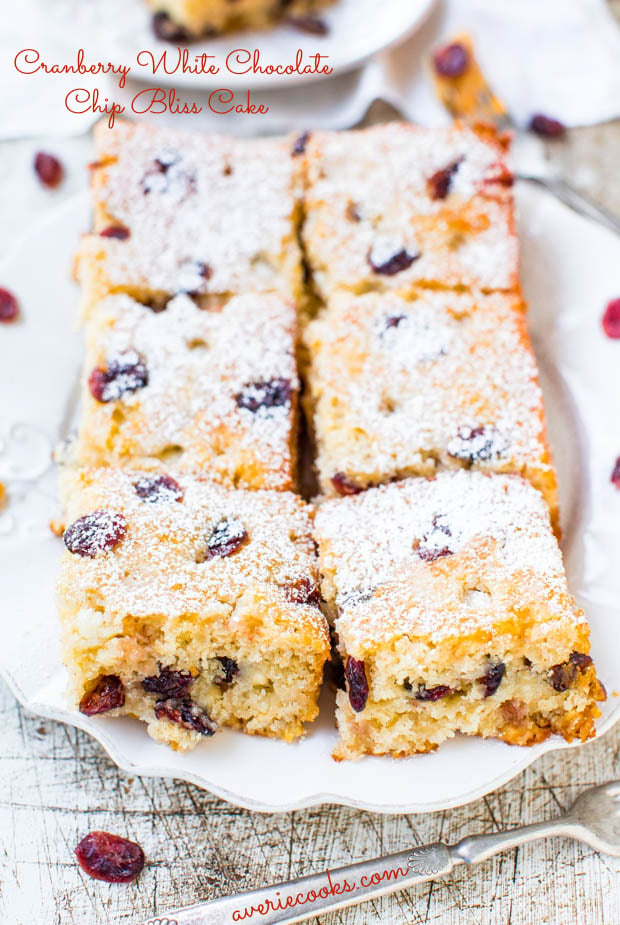 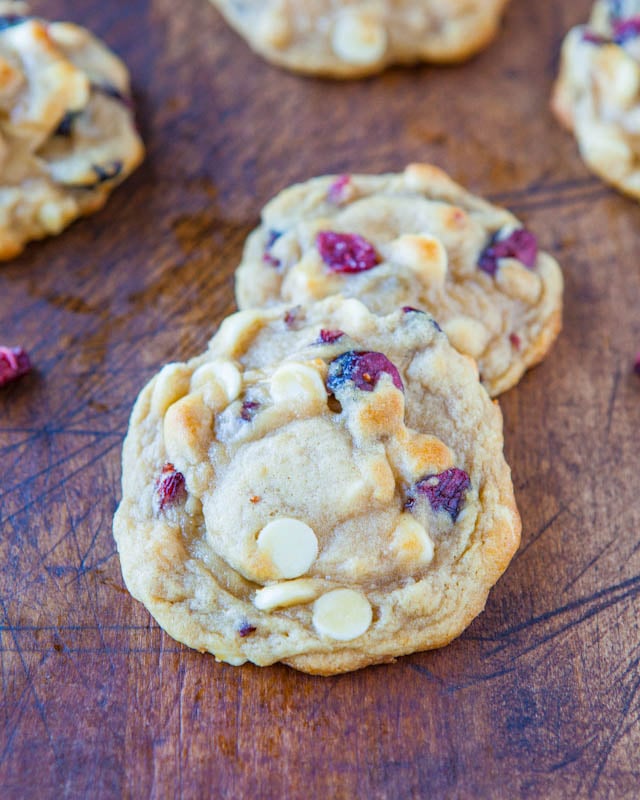 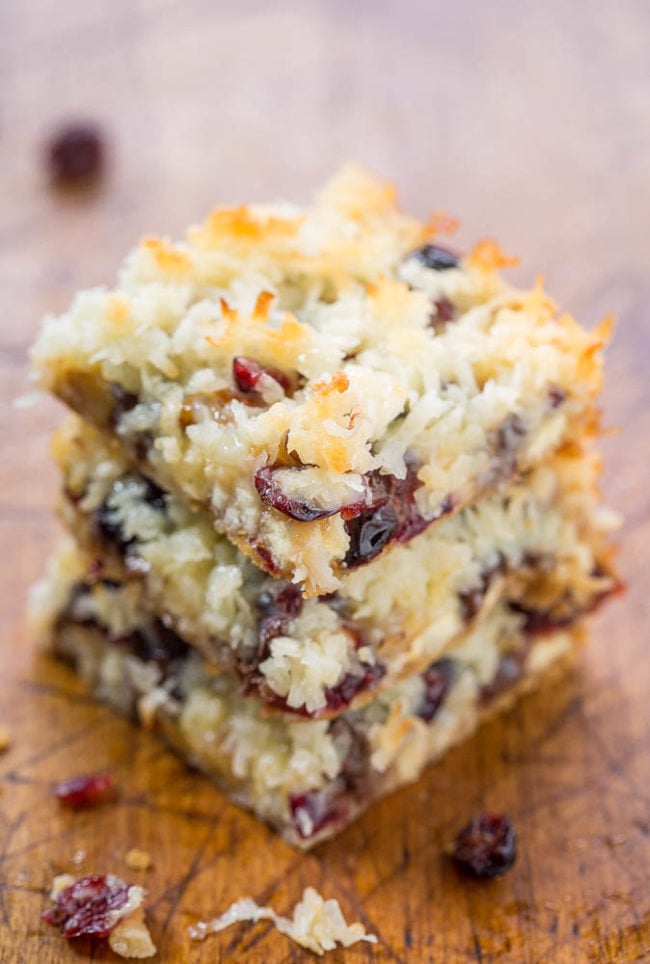 Crustless Cranberry Pie —A FAST, super EASY, no-mixer dessert that’s perfect for holiday entertaining!! Somewhere in between pie, cake, and blondies is what you get with this FESTIVE recipe! Take advantage of those fresh cranberries!! 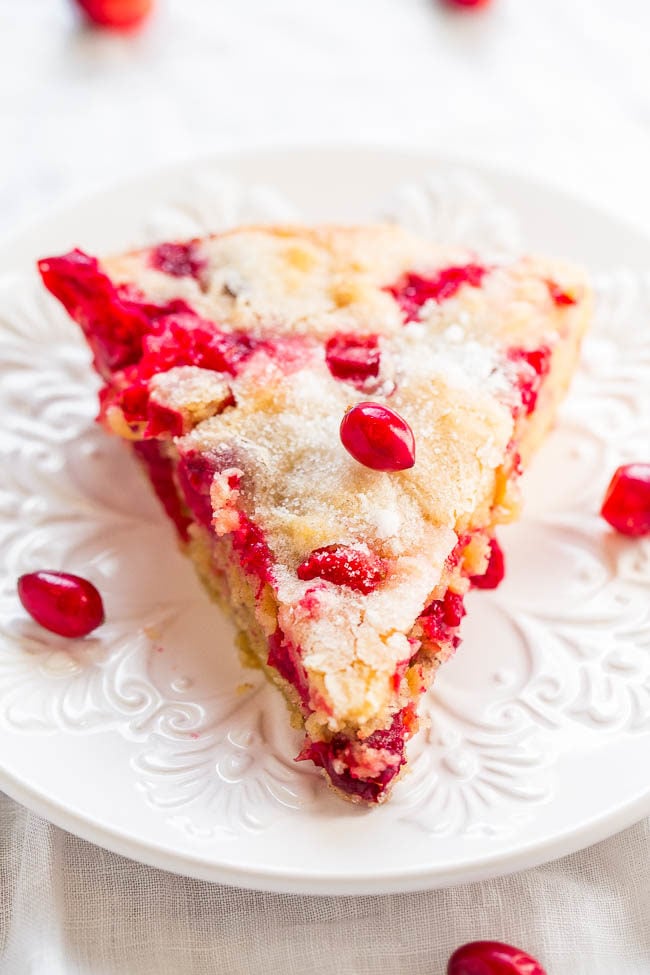 Cranberry Oatmeal Crumble Bars — The bars are soft, slightly chewy, and the hearty oats with big crumbles are a perfect contrast to the juicy cranberry filling. 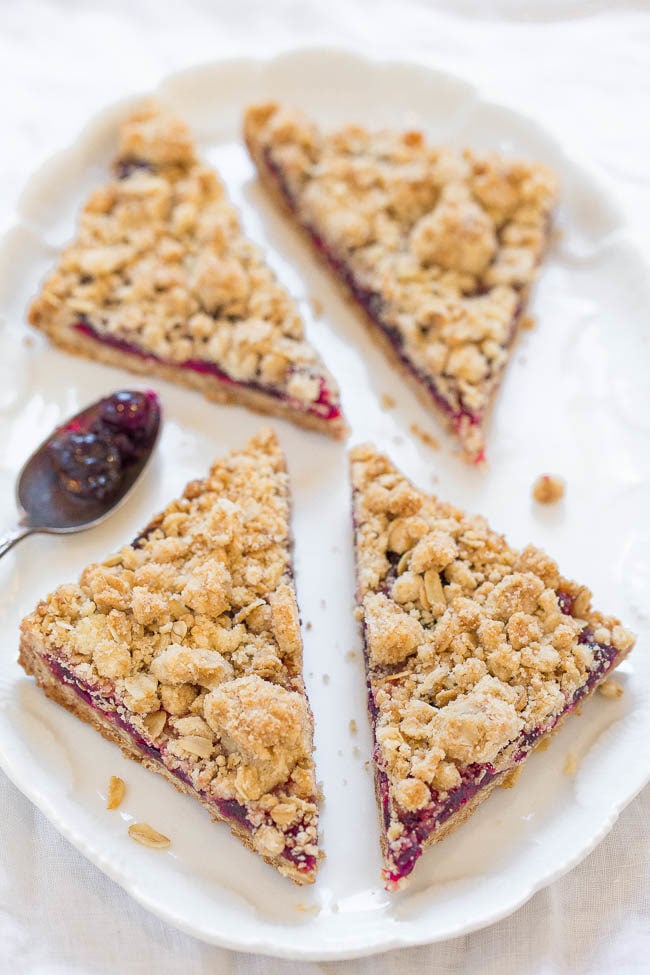 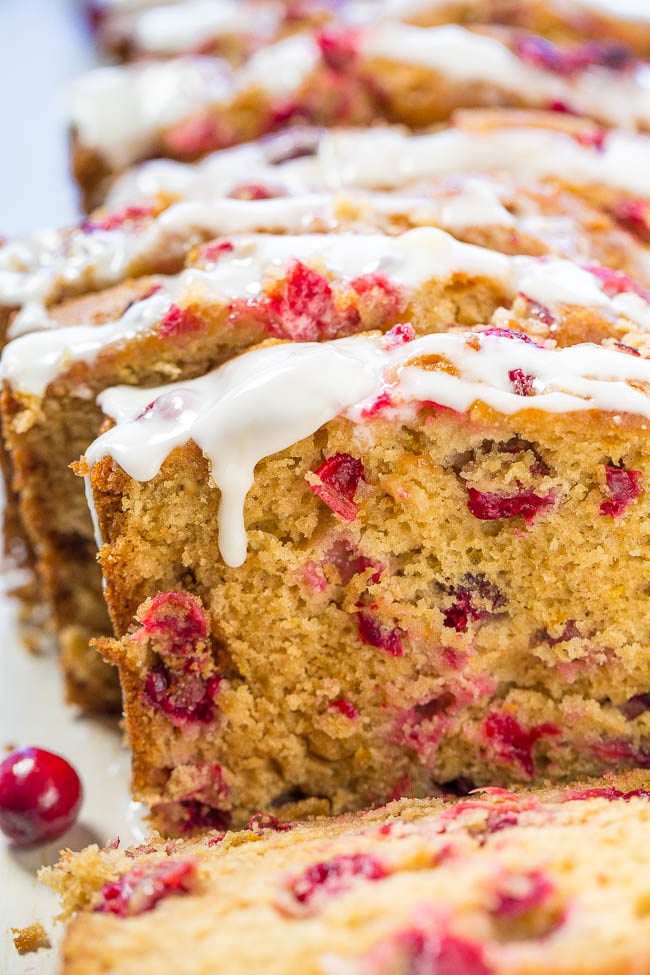 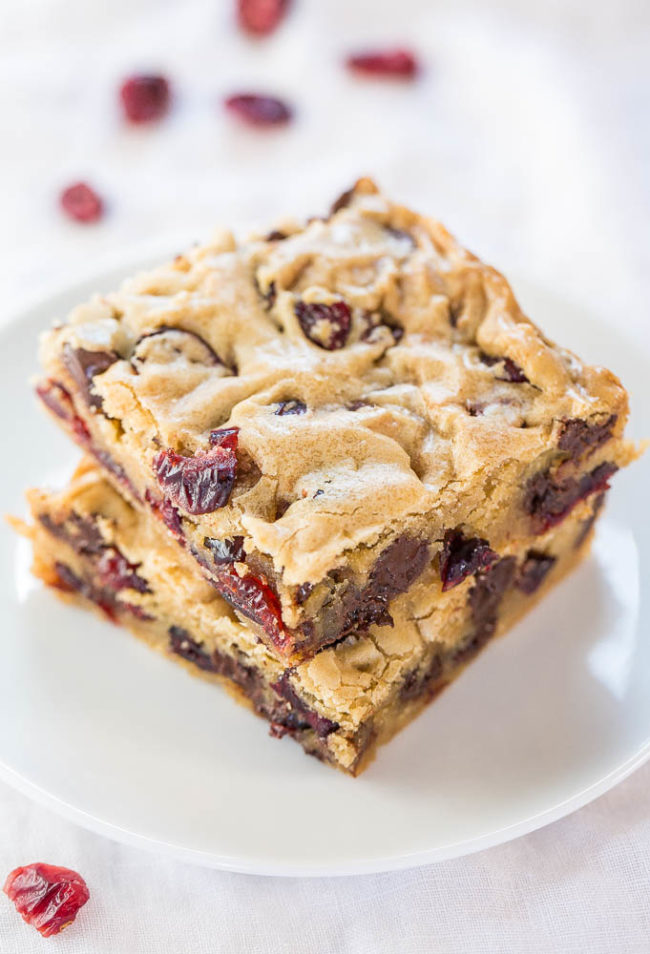