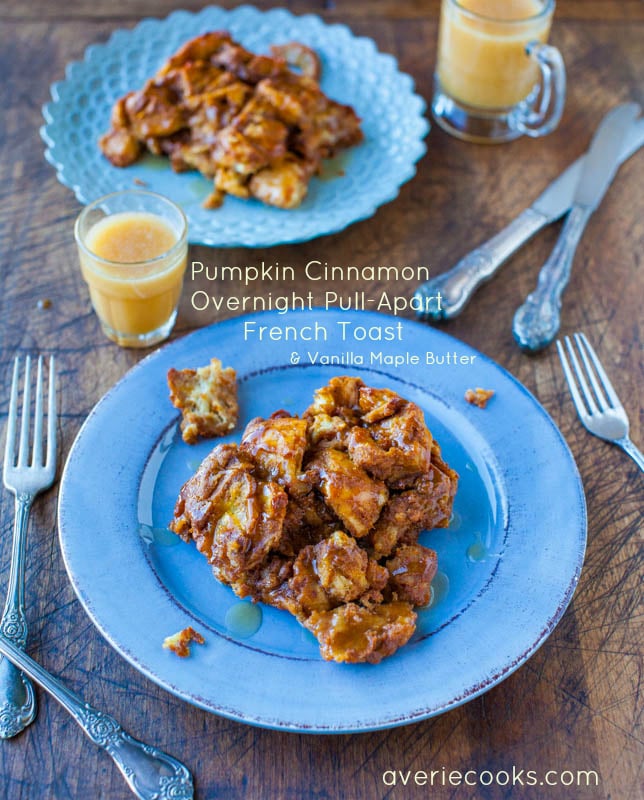 If a Crockpot is the equivalent of a set-it-and-forget-it dinner solution, this is the parallel equivalent for breakfast.

I’m an advocate of as little as humanly possible to do in the morning and this recipe for french toast pumpkin casserole is one that even I can pull off when I’m bleary-eyed because the work is done the night before.

And ‘work’ is a very loose term because there’s hardly any involved.

Coffee is my usual breakfast of champions and the last thing on my mind on a busy weekday morning when I’m making sure shoelaces are double-knotted and hair is un-knotted is making French toast or pancakes. Cereal, without spilling the milk, is all we can muster here and still get out of the house on time.

If you’re one of those people who makes French toast on weekday mornings, please come to my house because I need your help.

This pumpkin french toast bake was a game changer, though! 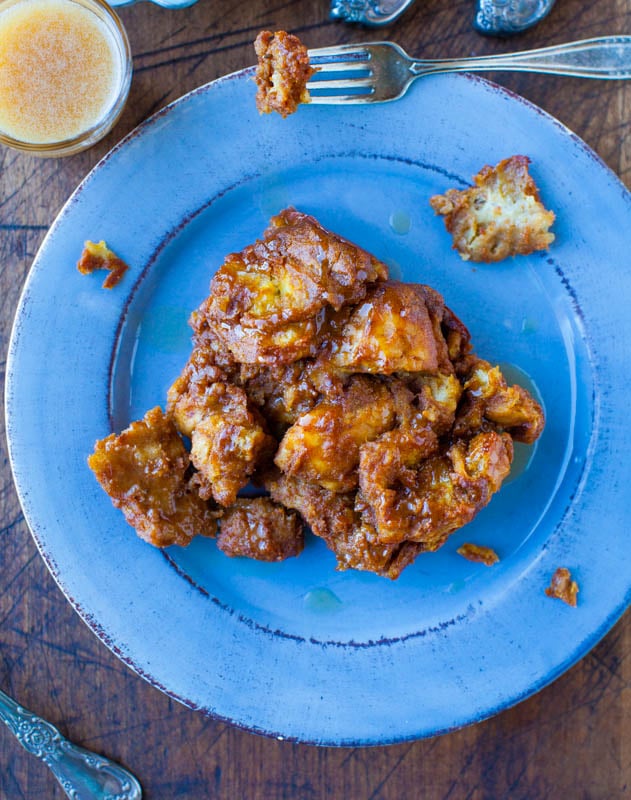 This French toast is everything I could want in French toast. The batter took about 90 seconds to whisk together and there was no active work at the stovetop flipping French toast over and risking grease burns on my wrists.

What I loved most about this French toast was how moist it was after it had all night to soak up and bathe in the marinade.

Between the maple syrup in the marinade that’s baked into the bread and then the vanilla maple butter that engulfs it after baking, I was in sticky, sweet, maple syrupy heaven.

The warming spices of cinnamon, pumpkin pie spice, and cloves complemented the pumpkin and maple and each bite had a distinctive cinnamon-sugar quality, which I loved.

The chunky pieces of bread that I could pull apart, one by one, made me reach for one more piece, and one more piece. It’s the French toast equivalent of monkey bread. Keep the napkins handy and embrace the sticky chunks.

Between the maple syrup, vanilla, cinnamon-sugar, and the sweet perfume of baking pumpkin, my house smelled so fabulous that the family set up camp in the kitchen waiting for this to emerge hot from the oven. 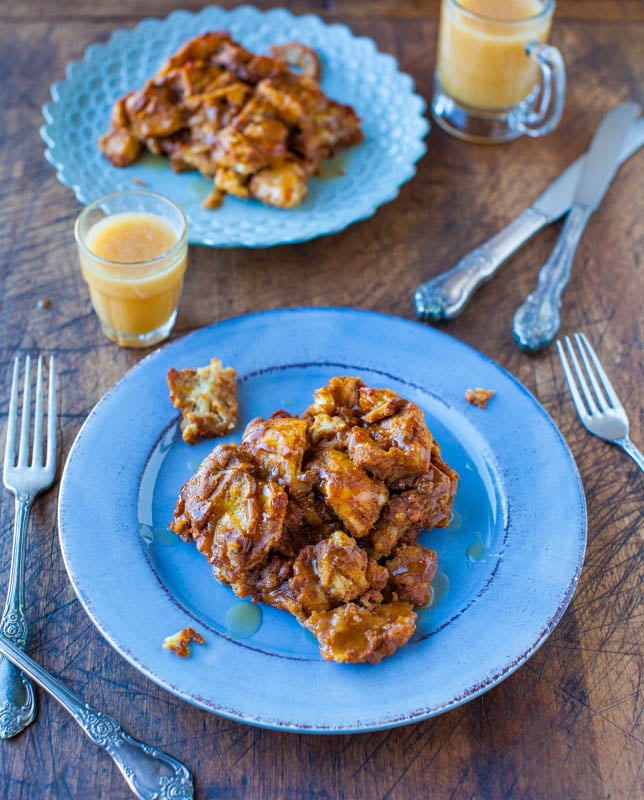 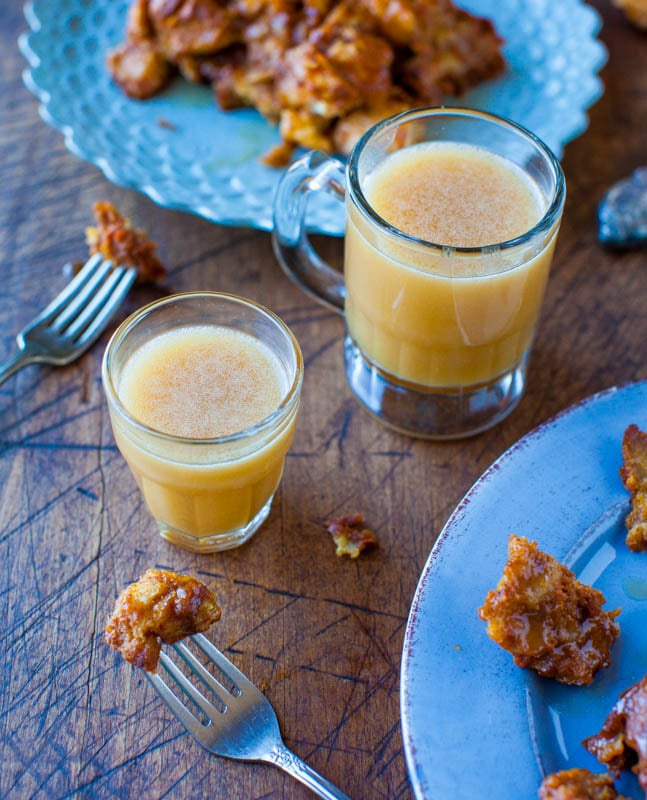 This fall French toast recipe couldn’t be simpler to prepare! Here’s an overview of how the recipe comes together:

The afternoon or evening before you plan to serve the french toast pumpkin casserole: 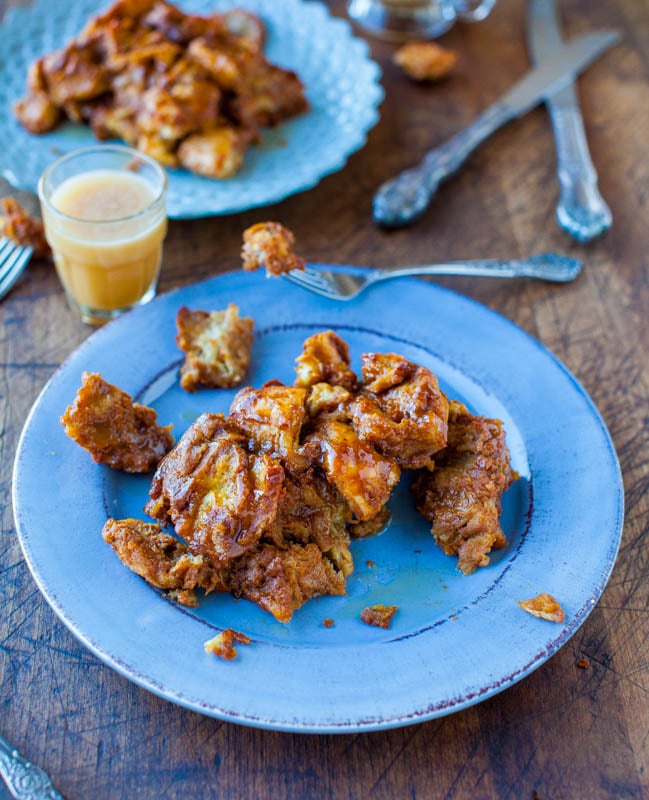 While the French toast is baking, make the vanilla maple butter: 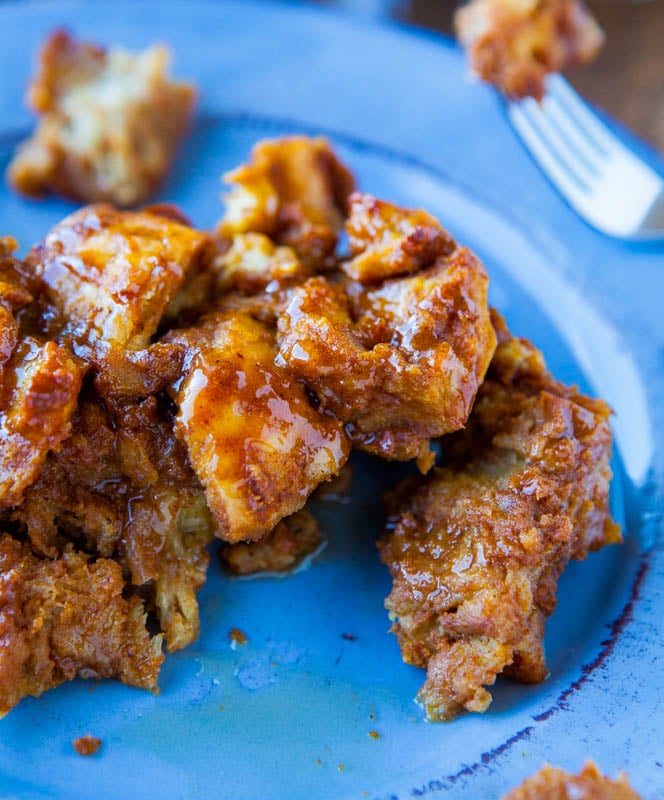 Now’s the time to use the ends of your bread-baking fails! You know, those hard, dense, hockey puck-like loaves of bread that you’ve been making in your bread-baking experiments that for some reason didn’t quite rise as nicely as planned or were as dense as 200-year-old tree trunks. Feel free to use those.

Or, simply buy a one-pound loaf of French bread, a crusty baguette, or a hearty bread from your grocer’s deli and slice about 12 ounces of it, about three-quarters of the loaf, into chunky cubes about two-inches in size.

Don’t slice the cubes too small because they need to be large enough and have enough surface area that the marinade doesn’t transform them into a mushy mess overnight.

Can I Use Regular Sandwich Bread in This Recipe?

No! Do not try this pumpkin monkey bread french toast with the equivalent of white Wonder bread, or even regular sandwich bread that comes in plastic.

Spices: I went heavy-handed on the cinnamon so that it wouldn’t get lost in a sea of other competing flavors, but scale it or the pumpkin pie spice back a bit if you’re not as much of a cinnamon fiend as I am.

Bread: The bread needs to be a hearty, dense, substantially-textured loaf. Stale bread is perfectly acceptable and almost preferred because that renders the bread capable of absorbing all the glorious drippy, saucy, sweet pumpkin and cinnamon-spiced marinade without disintegrating.

To keep vegan: use vegan butter in place of all butter and use two flax eggs in place of the eggs.

To keep gluten-free: use a hearty gluten-free bread. Take care all ingredients used are suitable for your dietary needs.

Vanilla Maple Butter (double the batch if you love syrup)

For the French toast:

For the Vanilla Maple Butter

To keep vegan, use vegan butter in place of all butter and use two flax eggs in place of the eggs. To keep gluten-free, use a hearty gluten-free bread. Take care all ingredients used are suitable for your dietary needs.

Cinnamon French Toast Bake — Cinnamon sugar french toast is baked rather than being griddled, which frees you up from having to stand at the stove flipping it. It takes minutes to assemble, and there’s an overnight option! 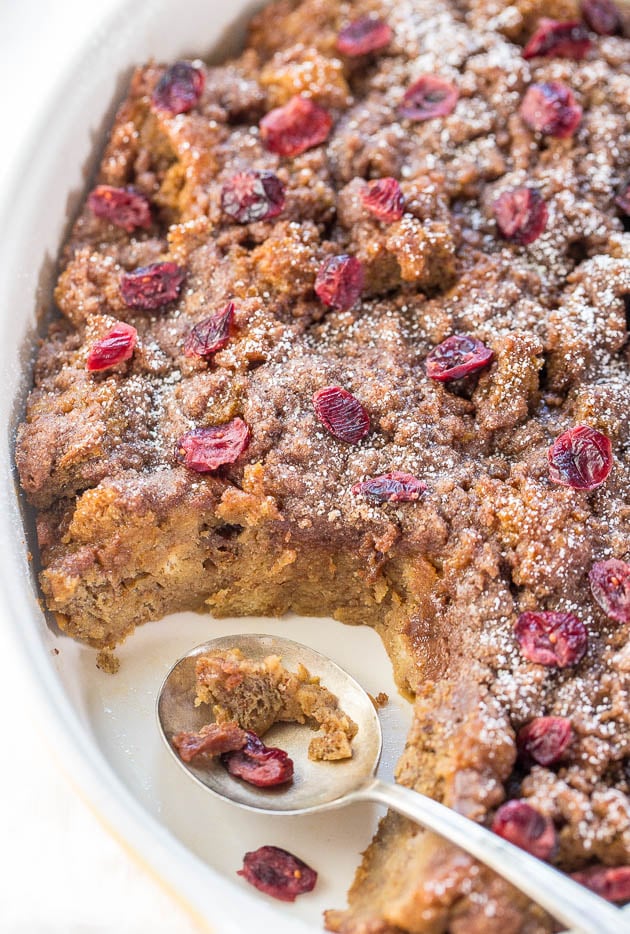 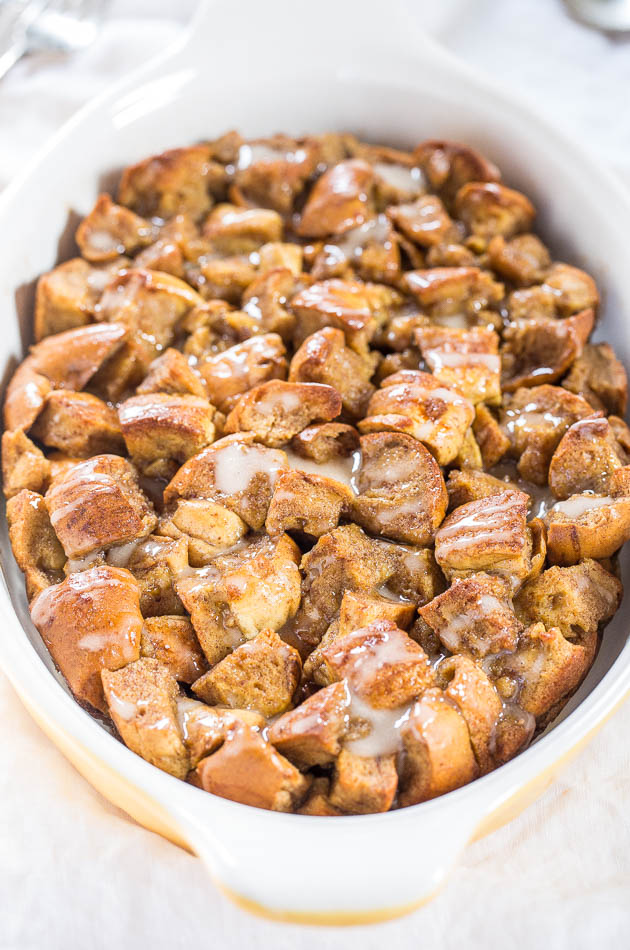 Caramel Overnight French Toast Casserole — EASY, soft, tender, and decadent French toast that’s coated in caramel sauce!! Assemble it the night before and wake up to an amazing breakfast or brunch that everyone will ADORE! 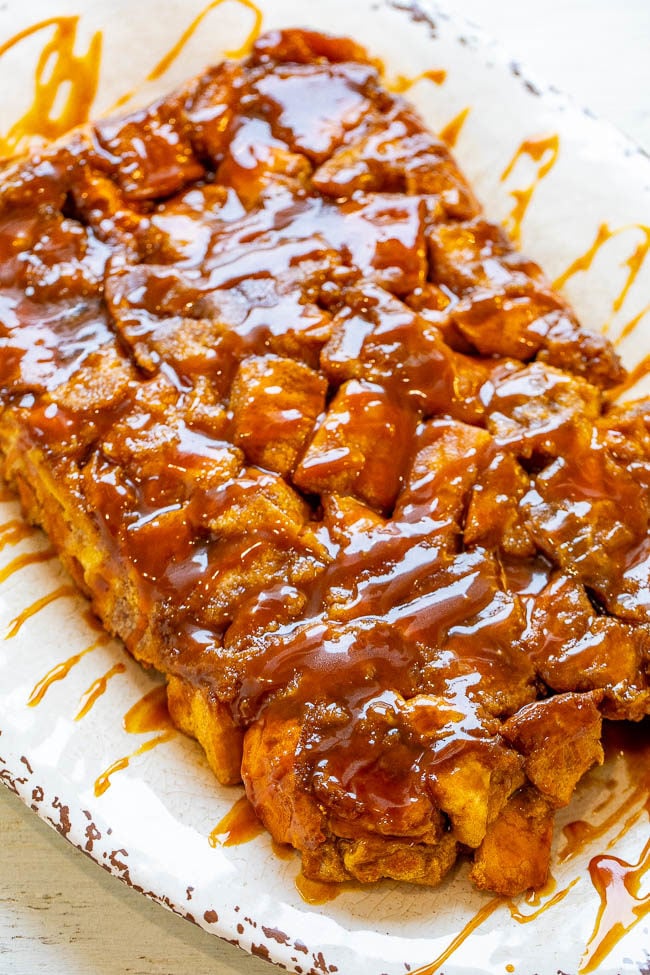 Overnight Syrup-On-The-Bottom French Toast – Assemble it the night before and wake up to AMAZING French toast the next morning!! An EASY homemade syrup layer on the bottom with super SOFT challah bread on top! 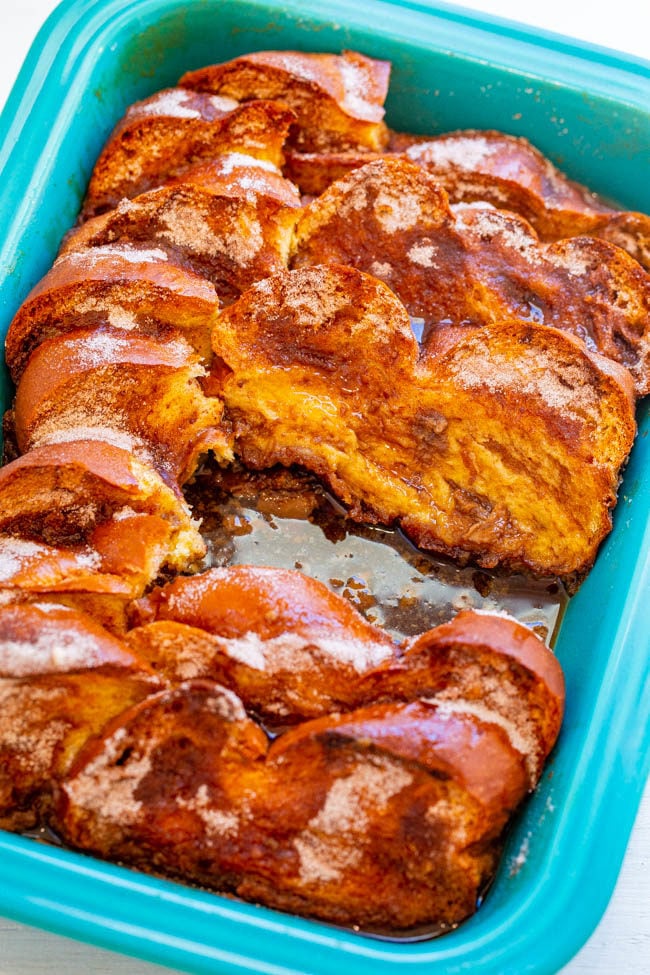 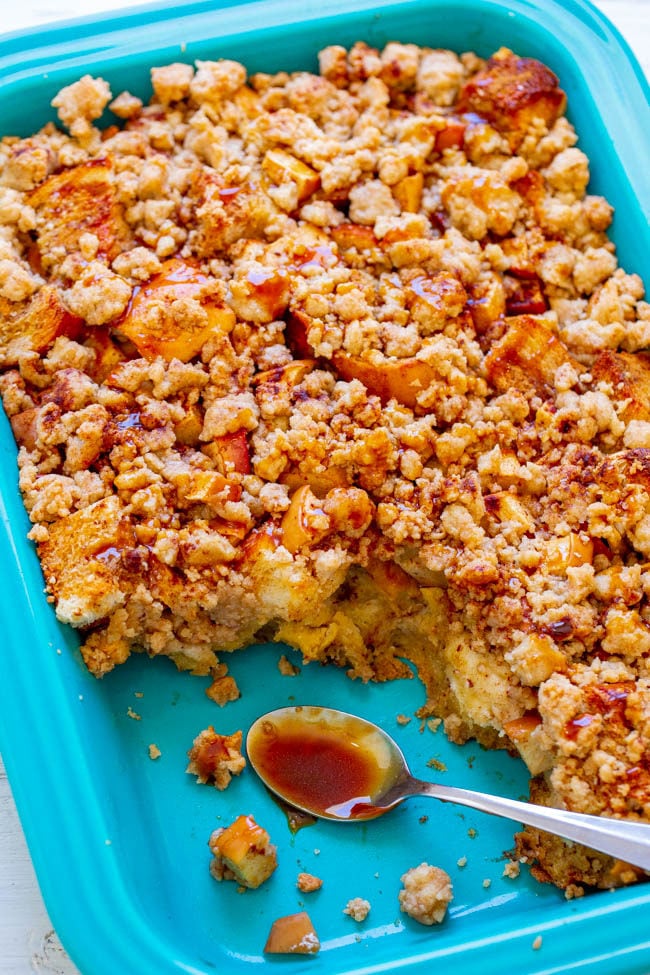 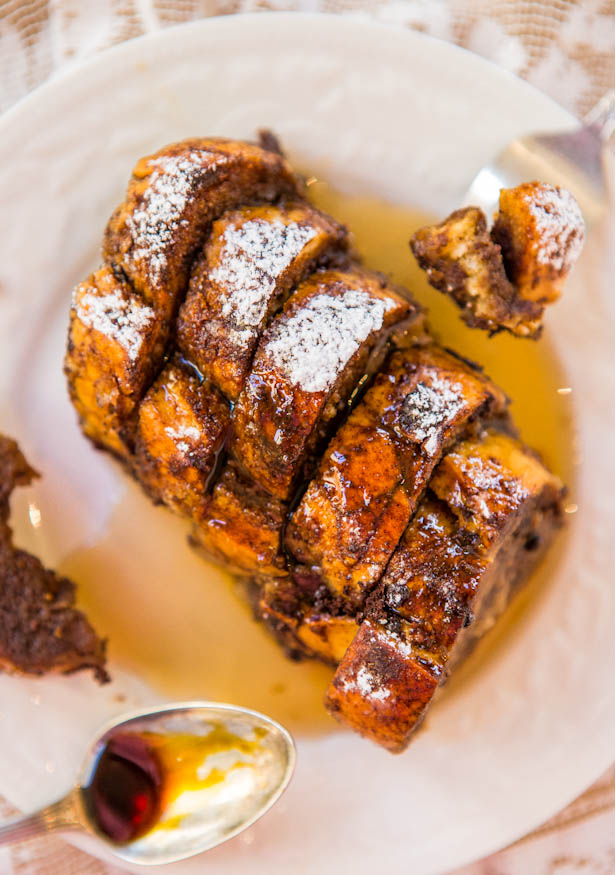