I’ve really been enjoying my new cookbook and am getting all sorts of inspiration from it.

Like buttering and toasting one of my favorite childhood cereals. 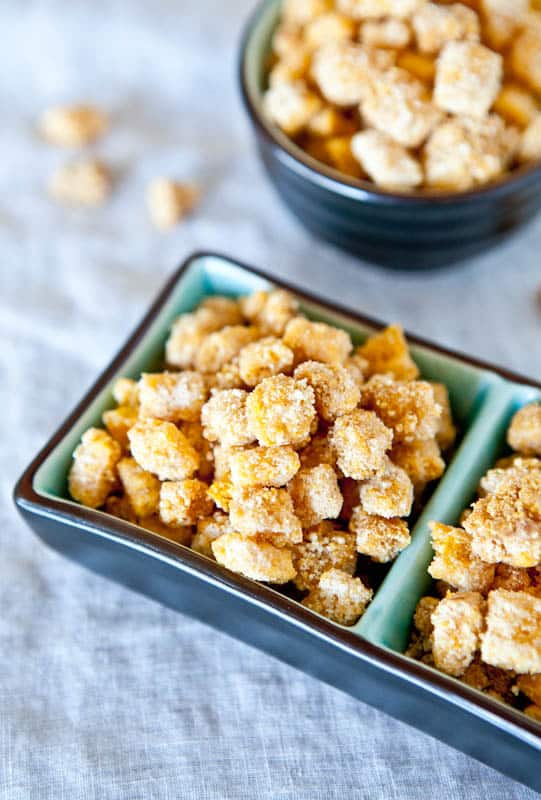 What I love about Christina and her book, is that she’s not afraid of unusual food and ingredient pairings.

Although some of the ingredients she uses are quite unusual (glucose and acetate strips), breakfast cereal is about as ordinary as it gets. 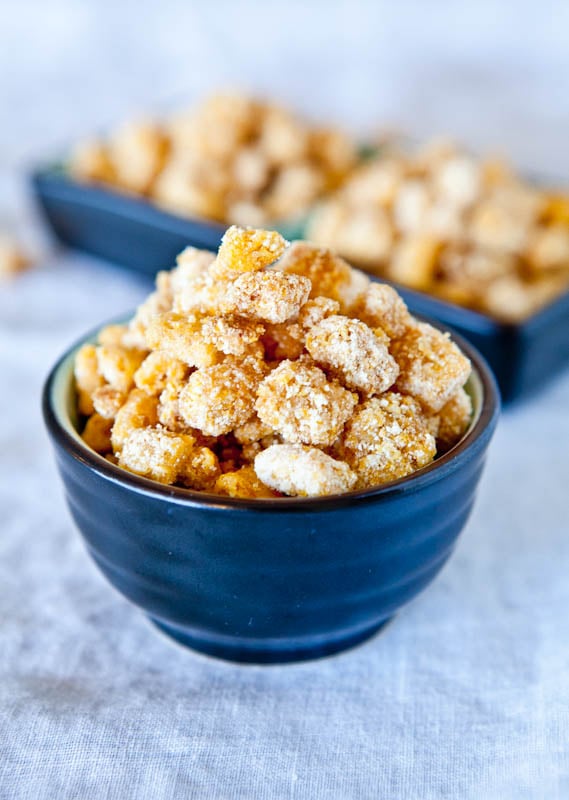 Cap’n Crunch could never be ordinary to me, but it did just get even better. 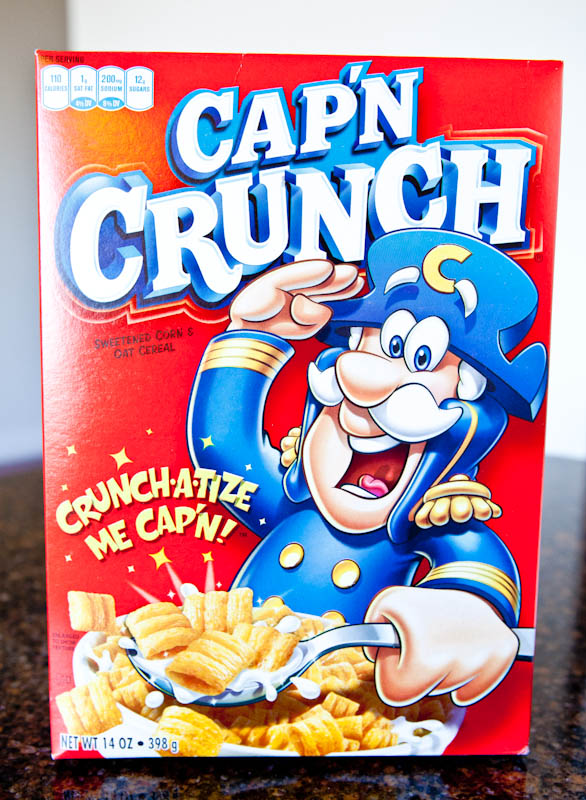 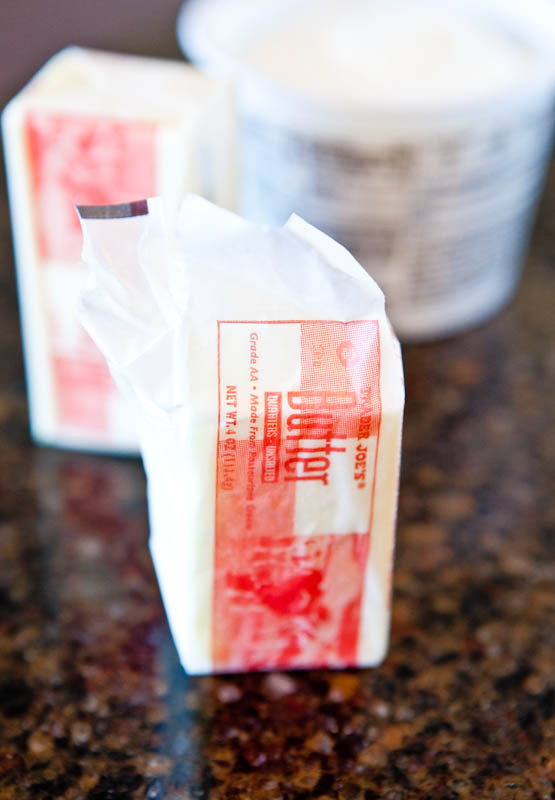 A stick of melted butter makes anything better, even cereal.

These taste like very crunchy buttered toast with just a hint of sweetness, not Cap’n Crunch. 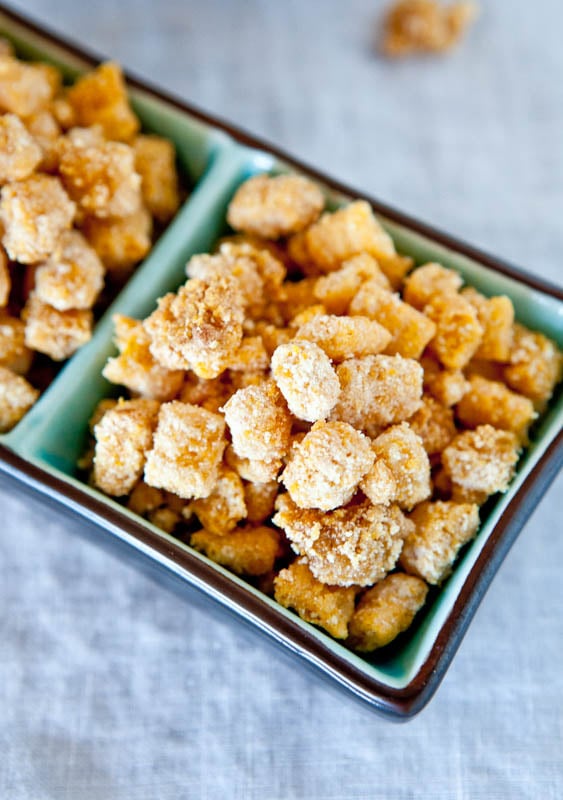 The secret ingredient that makes these little nuggets so special is a milk powder coating. Christina recommends never to actually try to make milk from milk powder because it just wouldn’t taste good (this is a woman who loves heavy cream) but it lends a special flavor depth to recipes.

I realized that she’s right and that milk powder is magical for deepening flavors when baking with it. Up until this recipe, I had never bought milk powder, used it, and didn’t even know what it looks like and was surprised at how granular and course it is, almost like Kosher salt. 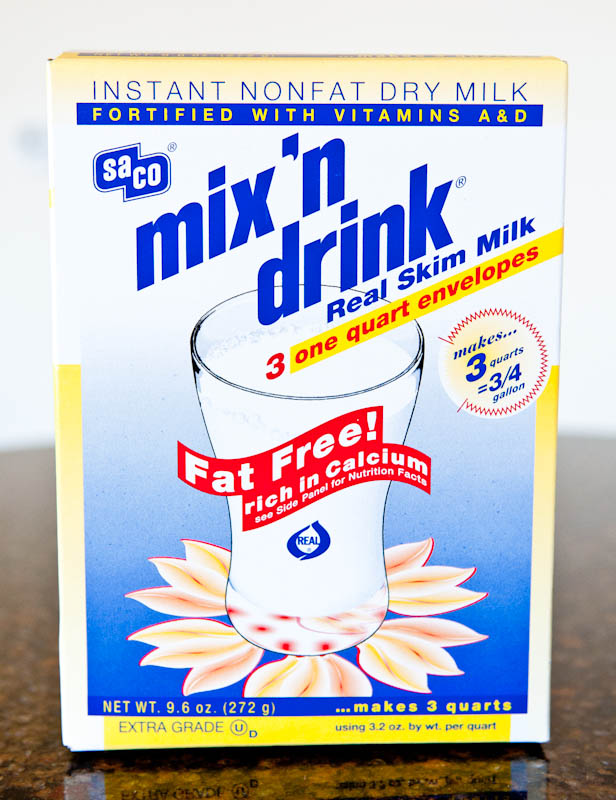 These crunchies don’t have a milky taste. What they do have is a buttery toast taste.

It’s like eating a whole bowl of buttery toast crumbs, that are slightly sweet, and more than slightly addictive. 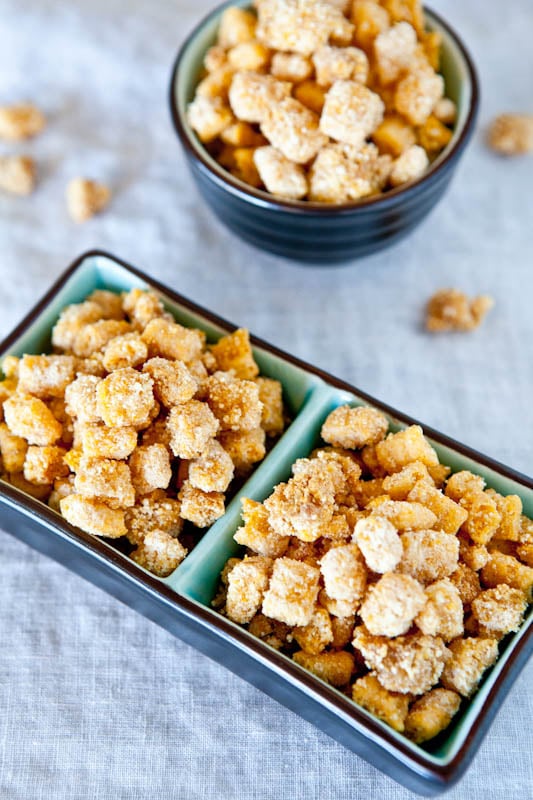 Preheat oven to 275F and prepare a baking sheet with a Silpat liner, foil, or parchment paper. In a large bowl, add the cereal and crush it with your hands by either taking fistfuls of it and squeezing or pressing the cereal firmly against the mixing bowl. *Note: Crushing is not necessary and if you’re going to eat it as a snack later you may not want to crush it. The reason to crush it is because the butter and milk powder will coat and absorb into the cereal somewhat better if it’s slightly crushed but the downside is you have crumbs. Your choice and I would crush no more than about one-third of the total amount cereal.

To the crushed cereal, add the remaining dry ingredients and pour the melted butter over the top, stirring and tossing to coat uniformly. Transfer the coated cereal onto the baking sheet, spreading it in a uniform layer. Bake for 20 to 25 minutes, or until it has barely begun to brown. Remove from the oven and allow cereal to cool on the baking sheet before transferring to an airtight container or baggie. Cereal will keep for at least two weeks.

Ideas: To the finished and cooled crunchies, add chocolate chips, pretzels, M&M’s, raisins, dried fruit, seeds, nuts, add them into homemade Chex mix or your favorite (storebought) party mix, sprinkle them over oatmeal, over other kinds of cold cereal, use them in cookie or muffin recipes, crush them and use their crumbs as “flour” or the dry ingredient to bind the wet in no-bake energy balls.

To keep vegan, use margarine and in place of the milk powder, use coarsely ground cashews, or simply omit. Use a crunchy vegan cereal of your choice. To keep gluten free, use a crunchy gluten free cereal. Take care that all ingredients used are suitable for your dietary needs.

Slightly crush the cereal in the bowl, first, before adding the remaining ingredients. The advantage to crushing the cereal a bit is that the coating will adhere better and the smaller pieces were ever more delectable than the bigger pieces.

The con is that crushed cereal equates to cereal crumbs and I don’t like crumbs. But the crumbs could be used in oatmeal, in granola, used as flour for cookies, or just eat the crumbs regardless. 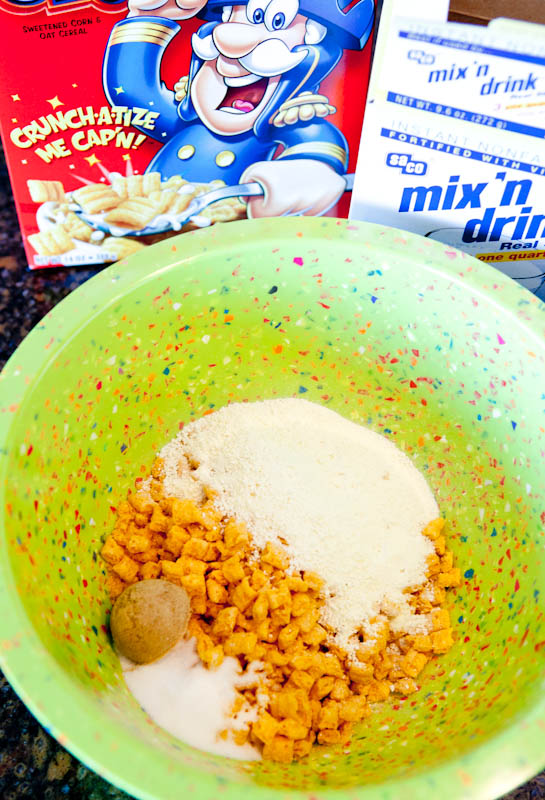 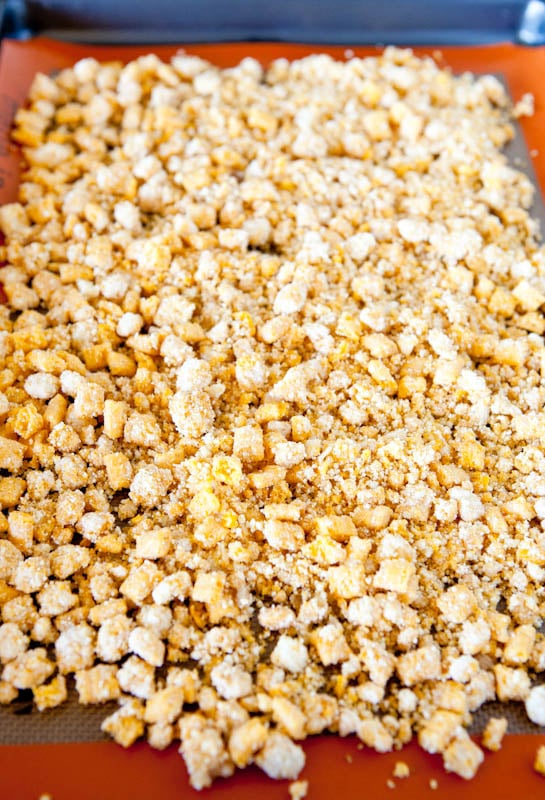 You’ll know these are done when your entire house smells like the combination of bread baking and like a giant piece of buttered toast is directly under your nose, which was about 22 minutes for me.

I did not flip them or toss them during the baking process because in Christina’s baked cereal recipes, she doesn’t toss or mess with them. There were a few pieces that browned more so than others on the bottoms, really resembling toasted bread crust. 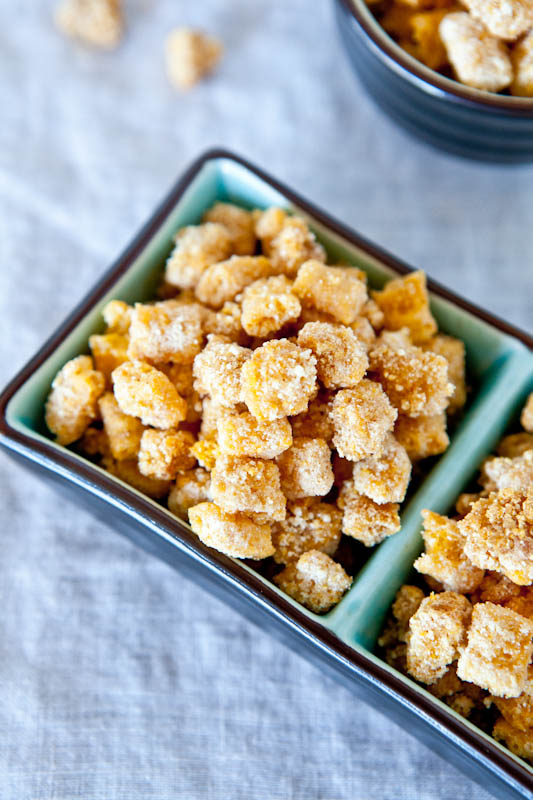 I put a little baggie of these in Scott’s lunch and he called me to ask what they were. He had no idea they were made from Cap’n Crunch and I said take a guess what they are and he said, well, I have no idea but I’d guess there’s butter in them? Smart man, yes, there is.

These buggers are addictive and after they’ve cooled you could add chocolate chips, pretzels, M&M’s, raisins, dried fruit, seeds, nuts, Fritos, potato chips, mini-Ritz sandwich crackers (cheese or peanut butter), or just about anything that’s taking up space in your cupboard.

You can also incorporate them into your favorite homemade or storebought Chex-type party mix.

Or just eat them by the handful. 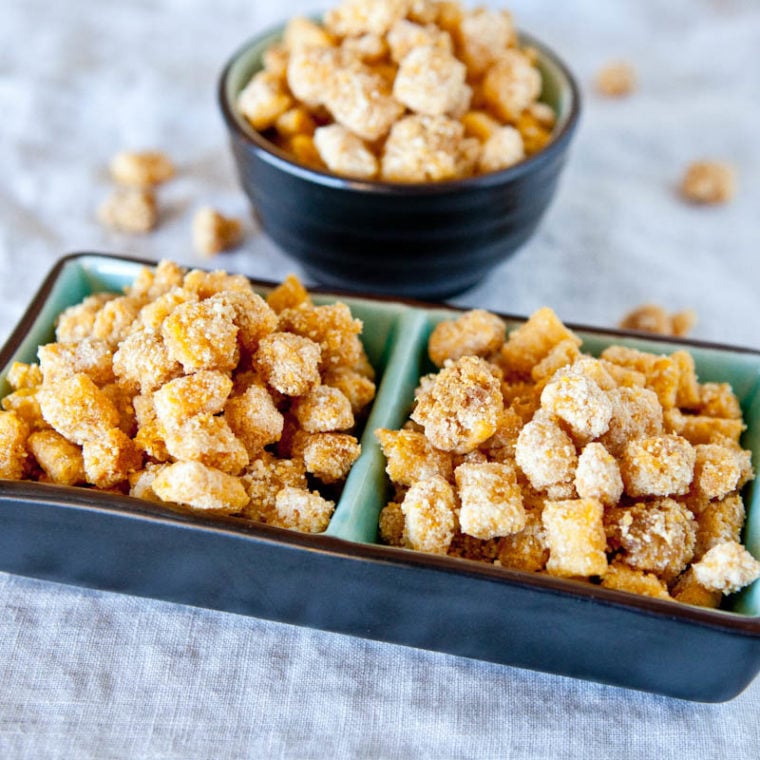 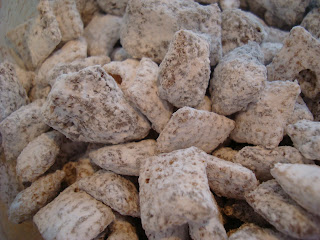 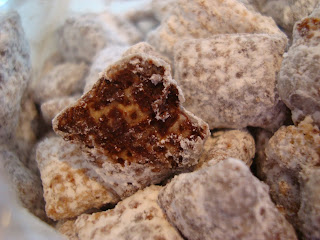 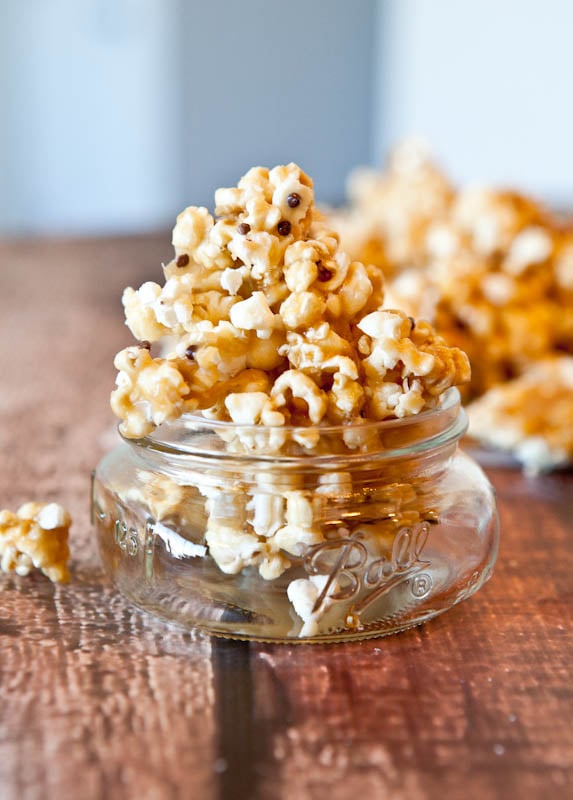 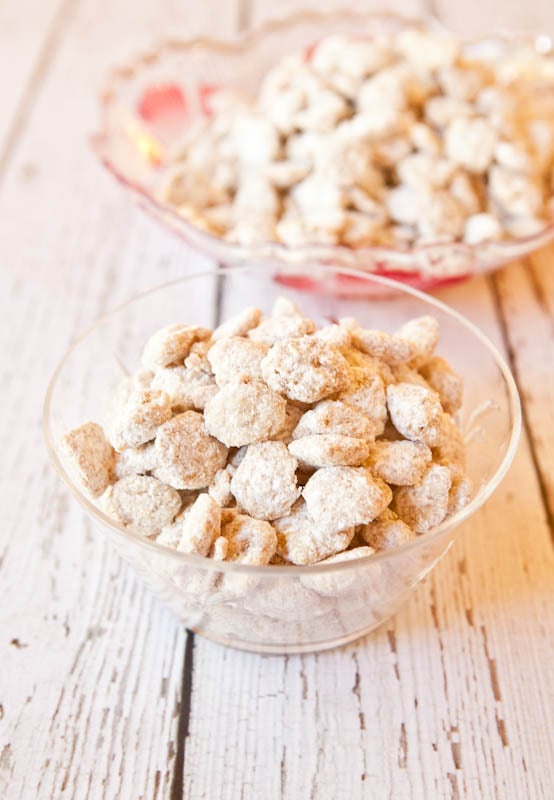 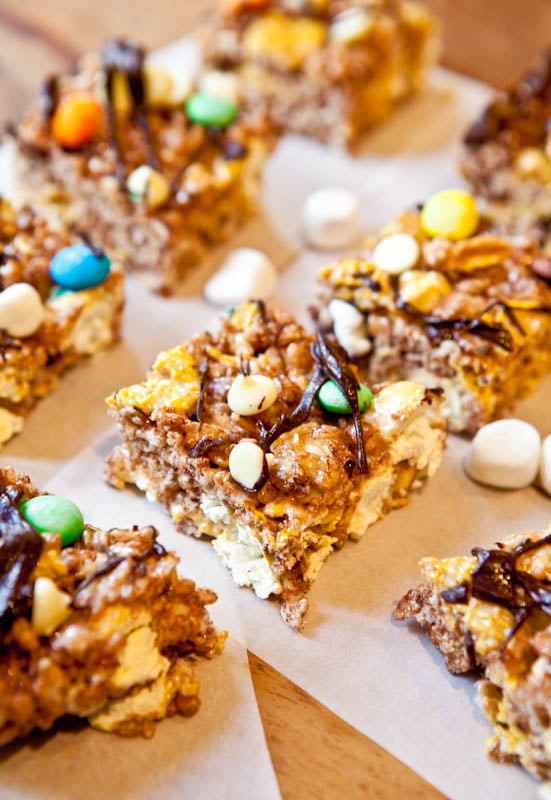 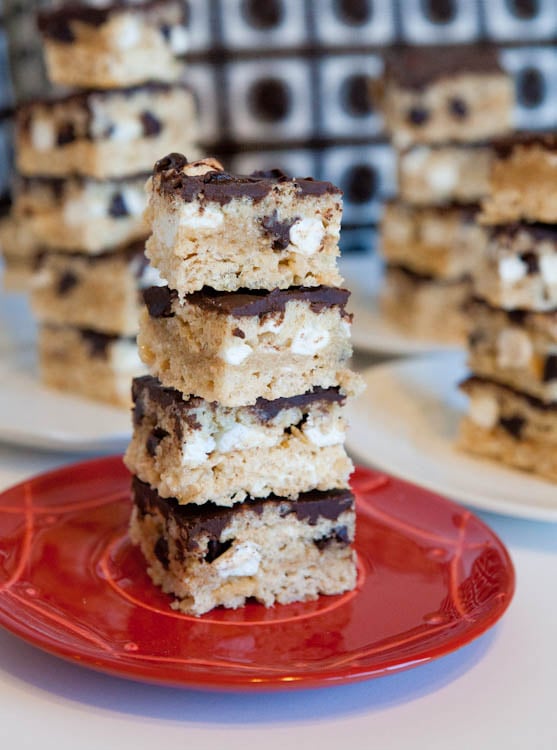 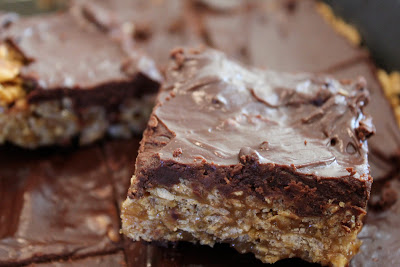 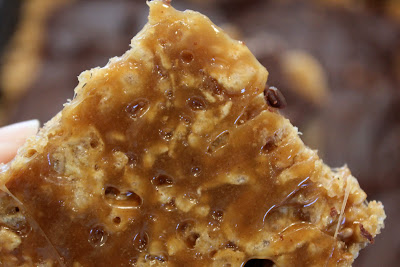 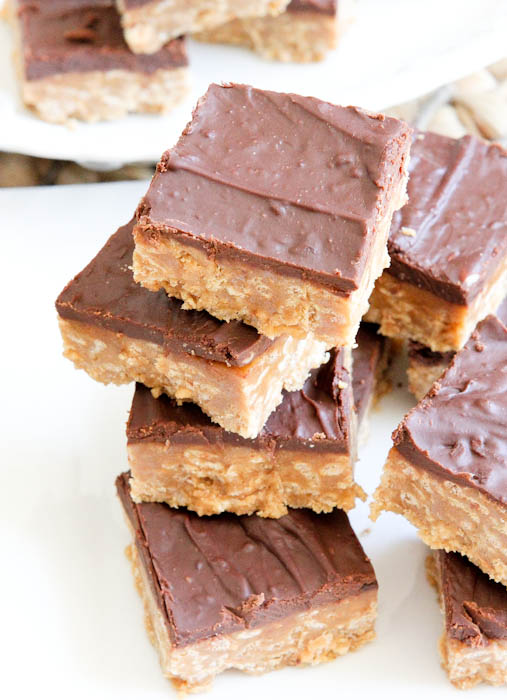 As I noted in the recipe, you could make this with any number of cereals from Corn Flakes to Puffins to your favorite vegan, gluten-free, or specialty cereal.

I, however, have a soft spot for Cap’n Crunch with it’s uber-crunchiness, the extreme texture of it (I love highly textured foods; mushy doesn’t work for me), and the slight almost peanut-buttery undertone in flavor of Cap’n Crunch makes it a favorite and truth be told, on a per serving basis, probably has less sugar than a Starbucks latte.

I grew up on breakfast cereal for breakfast, as a snack in lunches, and ate breakfast-for-dinner many nights as a kid.

In college and my early 20s, I think I lived on it. That, and Triscuits. I got my crunchy carbs in, indeed.

Have you made anything great using cereal? (links welcome)