I have a new recipe that is going to save me so much money. 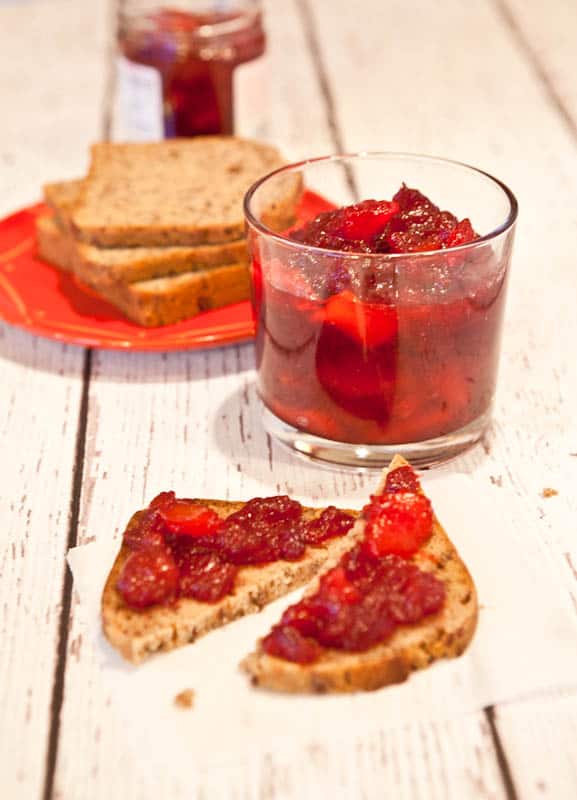 See, I am addicted to Trader Joe’s Mango Ginger Chutney but I can inhale one of these tiny jars in a day.  I like a little food with my condiments, sauces, and dips. 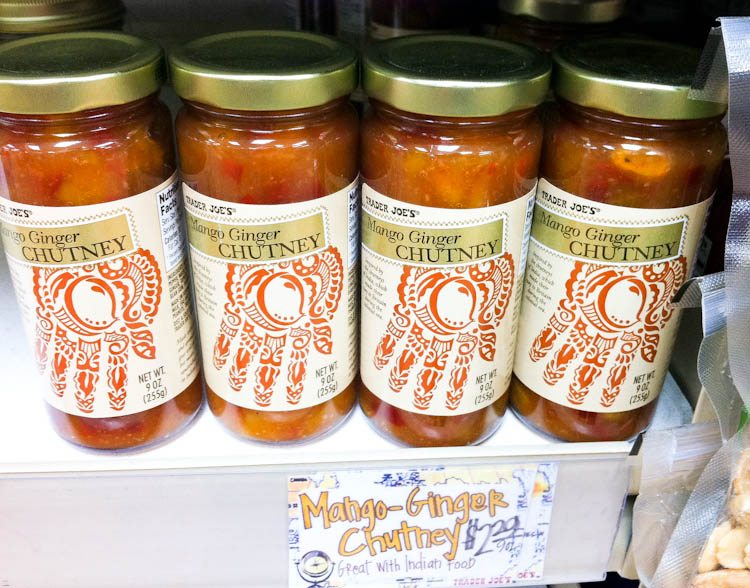 I put the TJ’s mango ginger chutney on everything from crackers to salads to using it as a veggie dip to just eating it straight up.

It’s so good but it follows the Starbucks latte principle: If you can make a homemade pumpkin spice latte for pennies on the dollar, then do so.

If you can make homemade chutney for for pennies on the dollar, then do so. 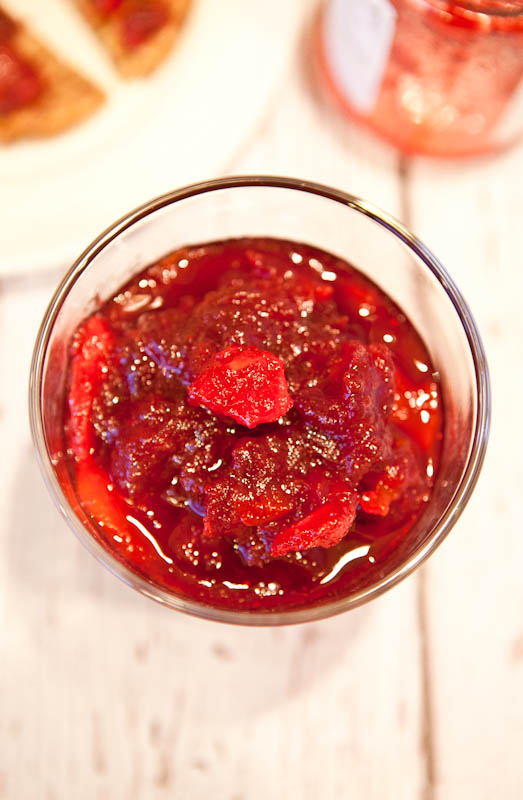 Plus, after seeing my friend Katie share her latest cranberry creation, that was all the nudging I needed and jumped on the cranberry chutney making train. 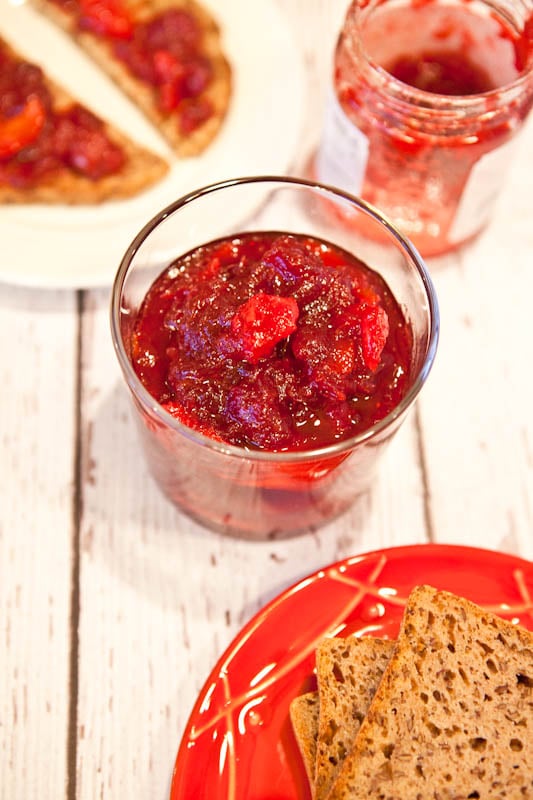 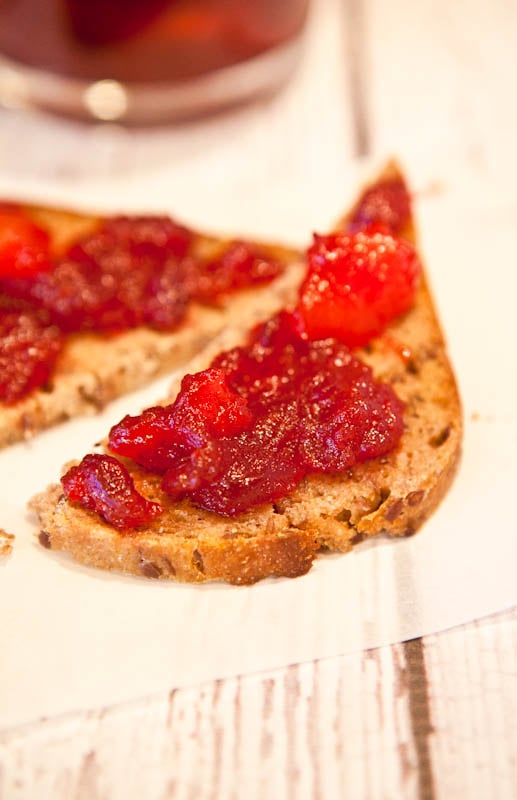 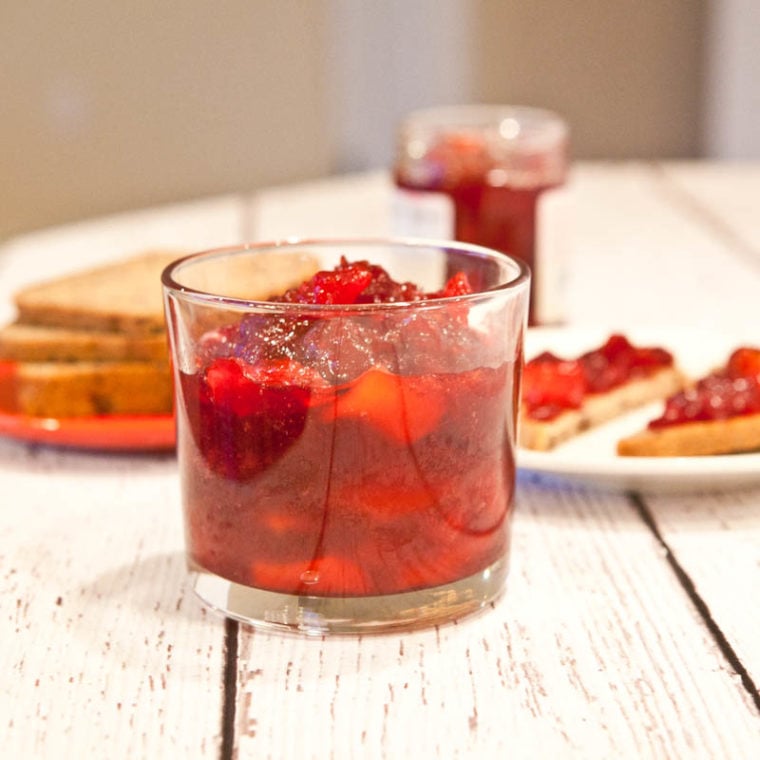 3/4 c mango, diced (I used TJ’s frozen mango chunks.  You could use another fruit, i.e peaches, nectarines, apricots, plums, etc. in place of the mango)

1 tsp ground ginger, or more/less to taste (I used 2 tsp but I like lots of ginger and that provided a very nice kick)

1/2 tsp cinnamon, or more/less to taste (I used 1 tsp but I like cinnamon)

Directions: Combine all items in a sautee pan on the stovetop and bring to a rapid boil and then turn down the heat and let it simmer until desired thickness is reached.  For me this was about 20 minutes but will vary on how thick you want the chutney and the rate/heat of your simmering on your stovetop.  I could see this being “done” for some people at about 10-12 minutes and for others, 30 minutes.

Yields: approximately 24 ounces of chutney (3 small glass jars).  Will keep in jars in the refrigerator for week(s) so you can make a large batch at once.  Use common sense but it will keep for quite a long time.

If you want heat and a kick, you could add a pinch of cayenne, red pepper flakes, or chili powder.  The TJ’s ginger mango chutney has a bit of heat from the red peppers and the heat plays off the sweet from the fruit and it’s a wonderful combination.

Other warm spices include nutmeg, cardamom, garam masala, or even curry if you like it.

If you want to turn this into more of a sweet jam/preserves, add vanilla extract.  If you have lemon, orange, or other specialty extracts, they could work well, too.

You could use alternate sweetening methods such as using stevia, maple syrup, agave, or alter the sugar proportions to taste.  Note the Ocean Spray Cranberry Sauce recipe starts with 1 c water to 1 c sugar.

If you are tweaking the spices and flavors, my suggestion would be to take half the batch and pour it into a jar(s).  For the other half, make the tweaks and optional add-in’s so that you have some diversity (and also if you didn’t like the tweak you chose, half the batch is ‘safe’)

Everything goes in one sauce pan… 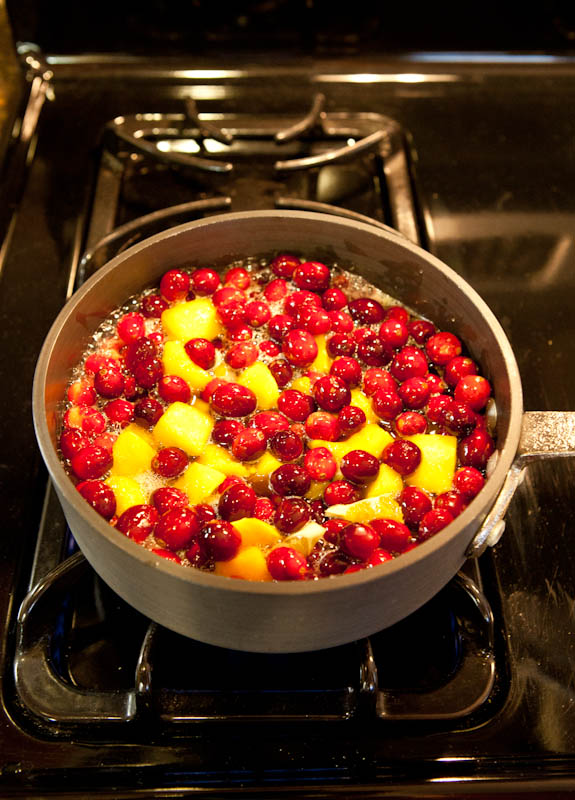 Bring it to a boil and then simmer it. 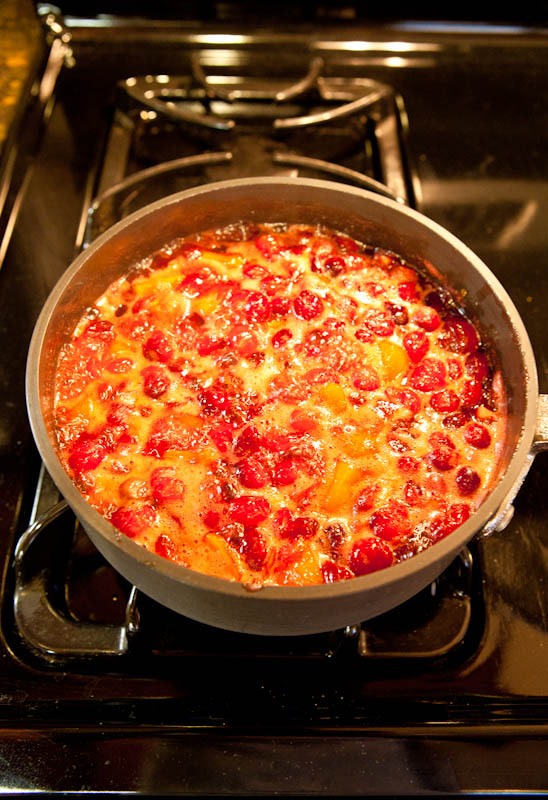 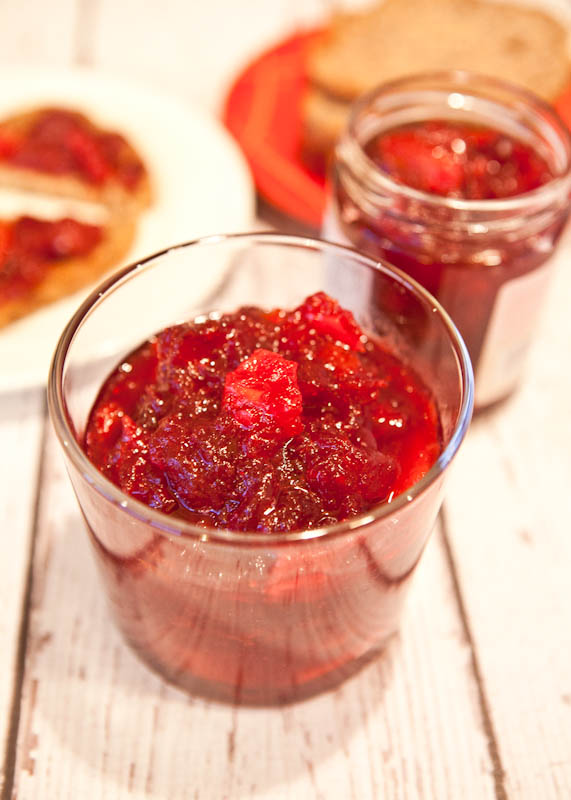 You could puree this or use an immersion blender if you desire, but I didn’t because I like the chunky texture of the cranberries, mangoes, and oranges.

They become soft but there’s still plenty of chew and texture. 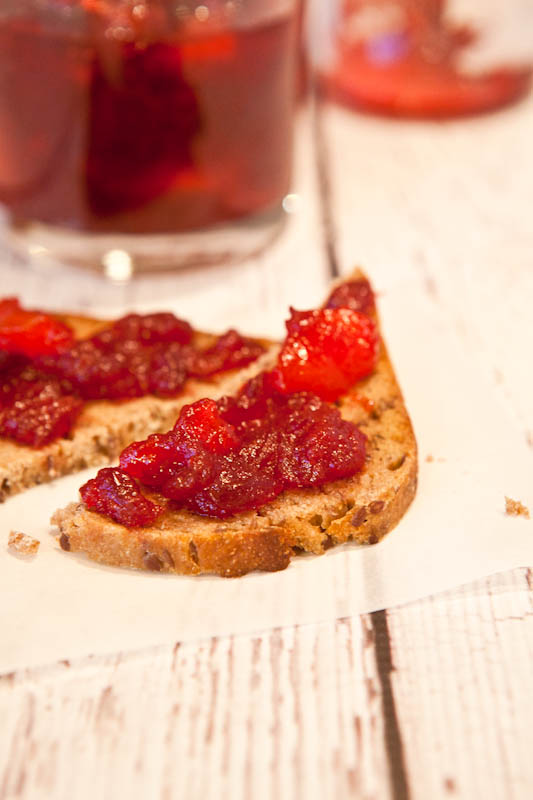 I could have called this ‘cranberry sauce’ but got a little fancier and called it chutney.  Here’s a handy site about the differences between chutneys, jelly, jam, preserves, spreads, sauces and so forth if you want to know what’s what.

It’s fancier tasting than standard cranberry sauce because of the heat from the ginger, combined with the subtle heat from the cinnamon, along with the added mangoes and oranges. 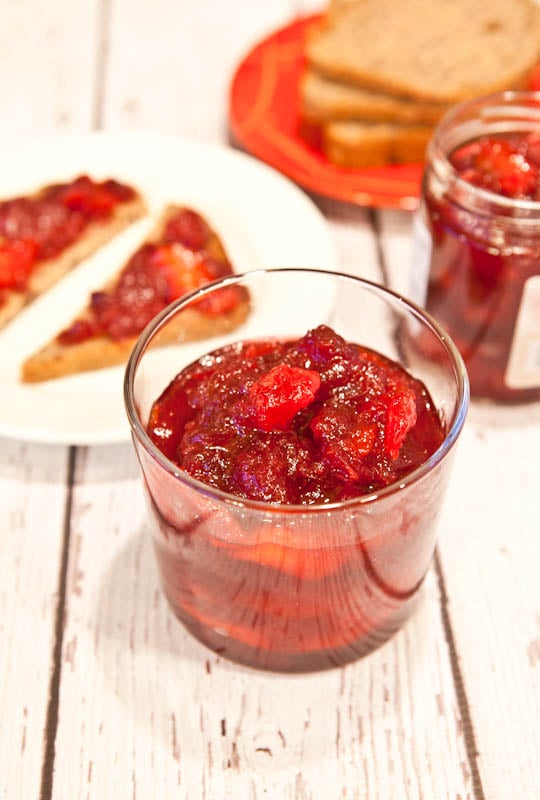 The heat was balanced with the sweetness from the mango and orange and there was definitely that telltale cranberry tartness present.

I inhaled one jar in a day.  Between the BLTs (bites, licks, tastes) while making it and taking the photos, it was a really fiber-rific and Vitamin C filled day.  If it’s true what they say about cranberries helping UTIs, I should be in the clear from succumbing to any of those til about 2019 with the rate I can see myself enjoying this chutney. 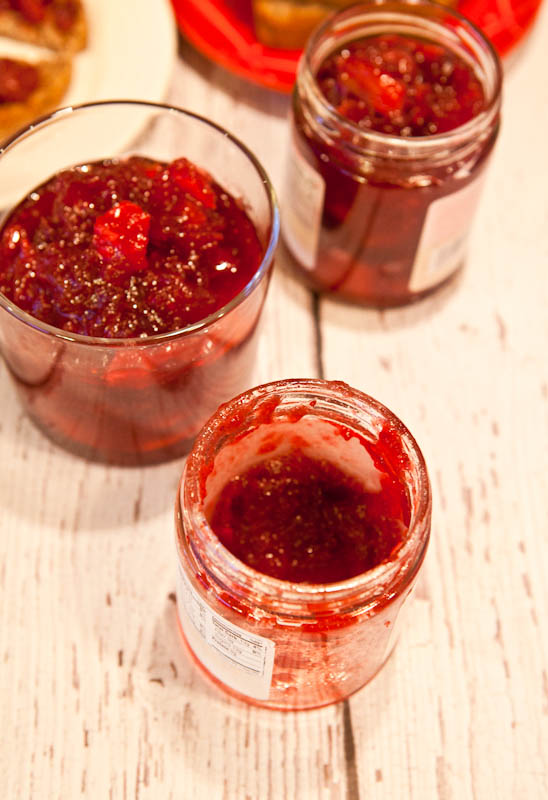 I plan to serve this for Thanksgiving rather than plain ‘ole cranberry sauce.

You could spread it on toast, use it as a dip for apples, use it as a side dish and served in conjunction with an entree or main course. 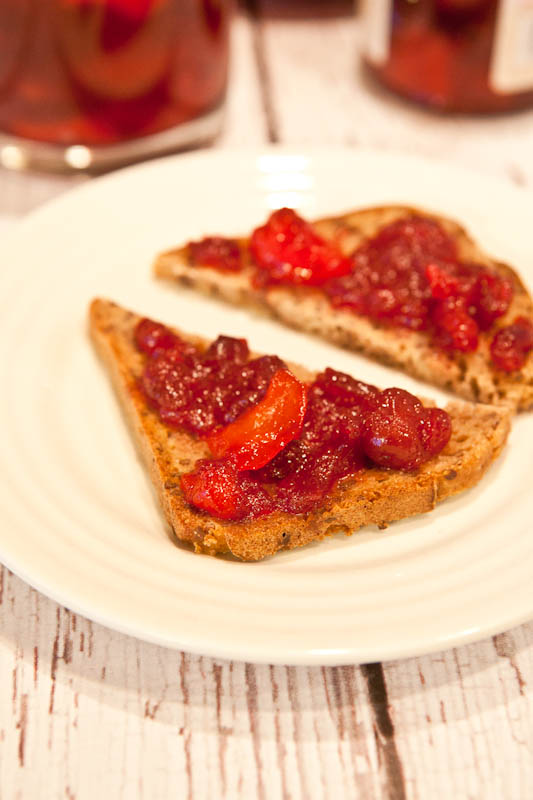 Or just eat it with a spoon while you’re waiting for the sun to come out so you can finally take pictures of it before you eat it all.

Or give a jar of it as a little holiday gift. 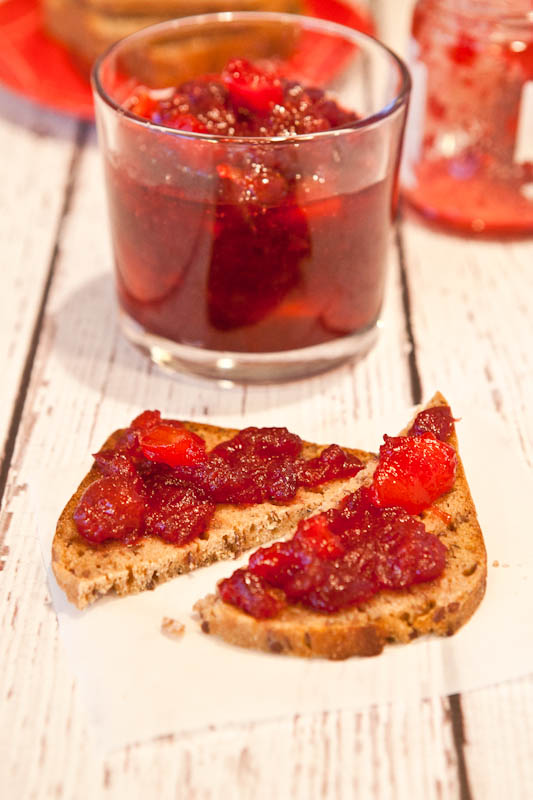 I’m just happy I will be reducing my TJ’s chutney-buying habit.

I do but they are the type of food that I usually eat about twice per year.  Thanksgiving Day, and the next day’s leftovers, and then 363 days later, I’ll have cranberries again.

However, I foresee this chutney going into rotation so I am thinking I will be eating a whole lot more cranberries and much more frequently.

2. Have you given any thought to Thanksgiving menu planning?

Are you cooking?  Bring a side dish to someone’s house?  Going to a restaurant?  Or just showing up at a relative’s house with a big appetite and enjoying the fruits of their cooking labors?  <– that’s the best way to do it if you can swing it

I can’t believe that Thanksgiving is just over a week away.  Wow.  This year flew by.

I did buy some food for Thanksgiving for Scott.

It’s not my kind of holiday; I hate stuffing, I don’t like mashed potatoes, gravy is too salty, and I don’t eat animal flesh.  So Thanksgiving is not an event I get too excited about, but it’s Scott’s favorite (food) holiday.

So if a box of Stove Top can put a smile on his face, then I’m all about it.  And yes, boxed stuffing is like boxed brownies:  There’s a reason they’ve existed for decades.  They’re easy, foolproof, and by and large, pretty tasty.

The one traditional Thanksgiving item I’ve always liked is cranberry sauce.  I’ve got that covered now.

Ok, and pumpkin things.  I’ve got those covered, too.

What are you making?  Or hoping to enjoy that someone else is making?

Edited to Add:  Something weird happened with Google Reader and the permalink on this post so if you somehow arrived at this post from this link  https://www.averiecooks.com/2011/11/gingered-cranberry-orange-mango-chutney.html

The two posts are being merged.  Weird.