Slow Cooker Baked Potatoes — Learn how to make soft, fluffy, tender baked potatoes with super delicious skin in your slow cooker! Use this method when you want to free up oven space for a holiday meal or when you don’t want to turn your oven on and heat up your house. Foolproof, perfect potatoes every time! 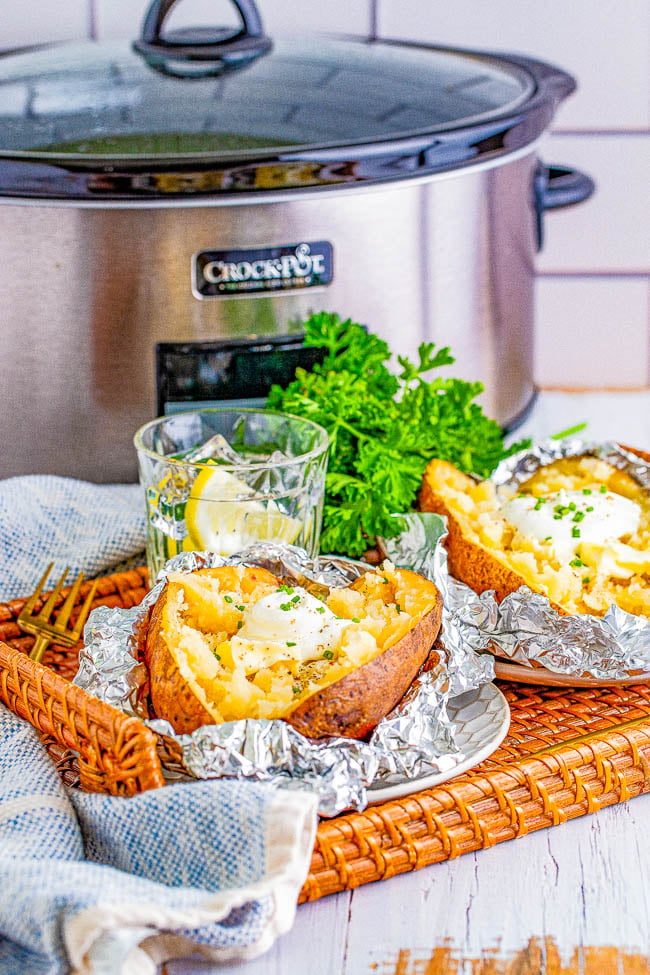 Growing up I ate so, so, so many oven-baked baked potatoes. They were my dad’s favorite food, and along with being inexpensive and easy, my mom made sure they were served extremely frequently. Although she never made baked potatoes in a slow cooker.

However there are times when slow cooking baked potatoes is advantageous. Specifically for a holiday meals when you don’t have room in the oven for potatoes.

Or when you have the luxury to plan ahead for hours and your baked potato side will be ready when the main course is ready and they can just hang out and wait in a warm slow cooker until you’re ready to serve the main. 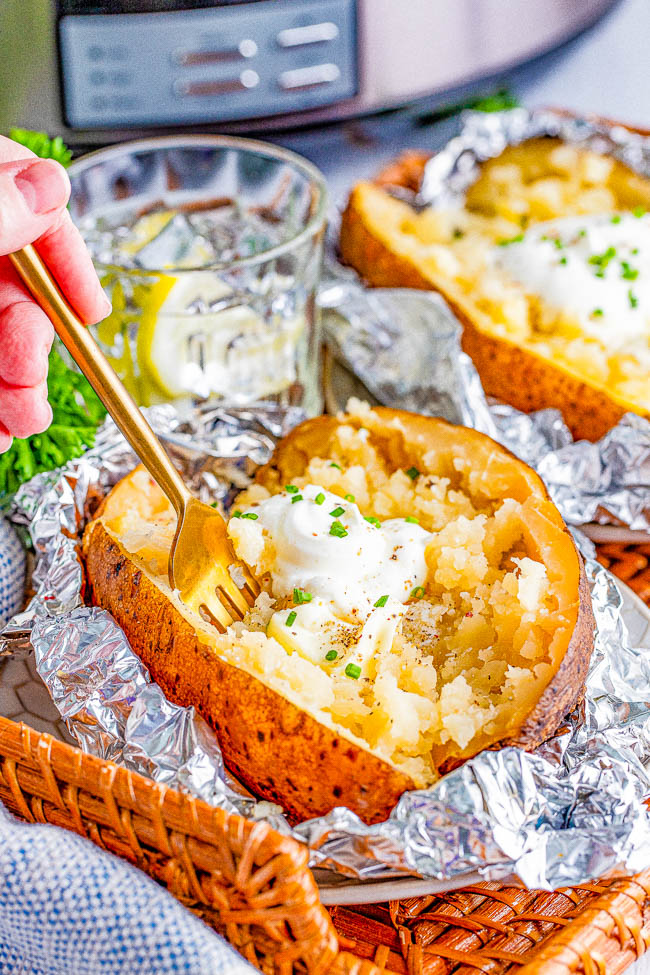 I should note we are not actually “baking” the potatoes and instead they are being slow cooked, which essentially results in them being steamed.

The result is a soft, tender, and fluffy potato no different than you’d get with oven baking. The skin is seasoned, super flavorful, and even non-skin eaters will enjoy it!

Admittedly so, this is one of the easiest and simplest “recipes” out there! It’s not so much a recipe as it is a methodology.

For baked potatoes in a slow cooker, you only need the most essential of ingredients including: 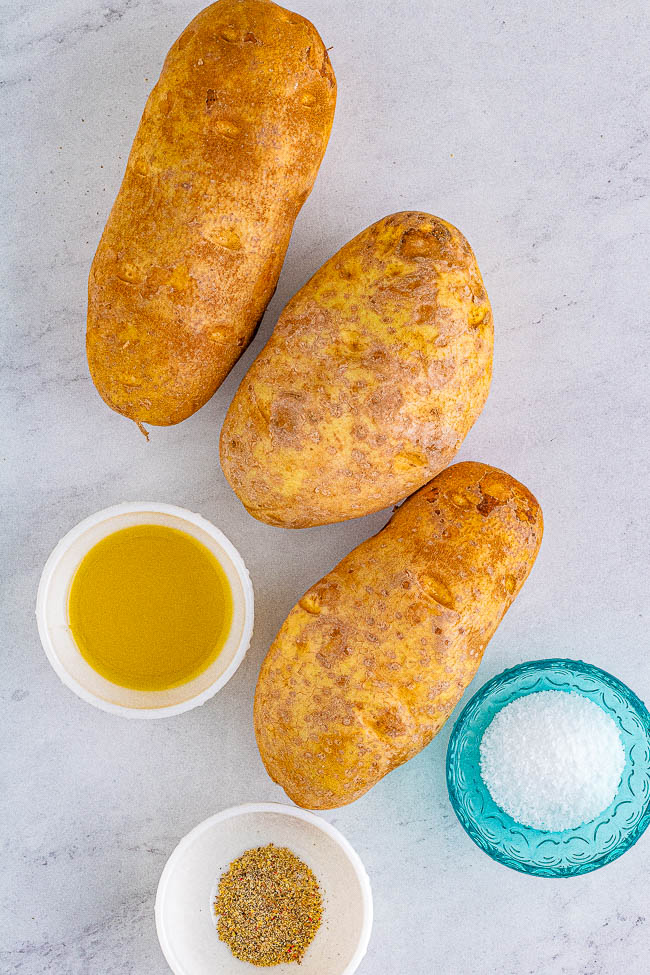 How to Make Baked Potatoes in a Slow Cooker

Baking potatoes in a slow cooker is seriously so easy! Actually, it doesn’t get any easier or more basic!

Step 1: Scrub the potatoes and pat them dry. 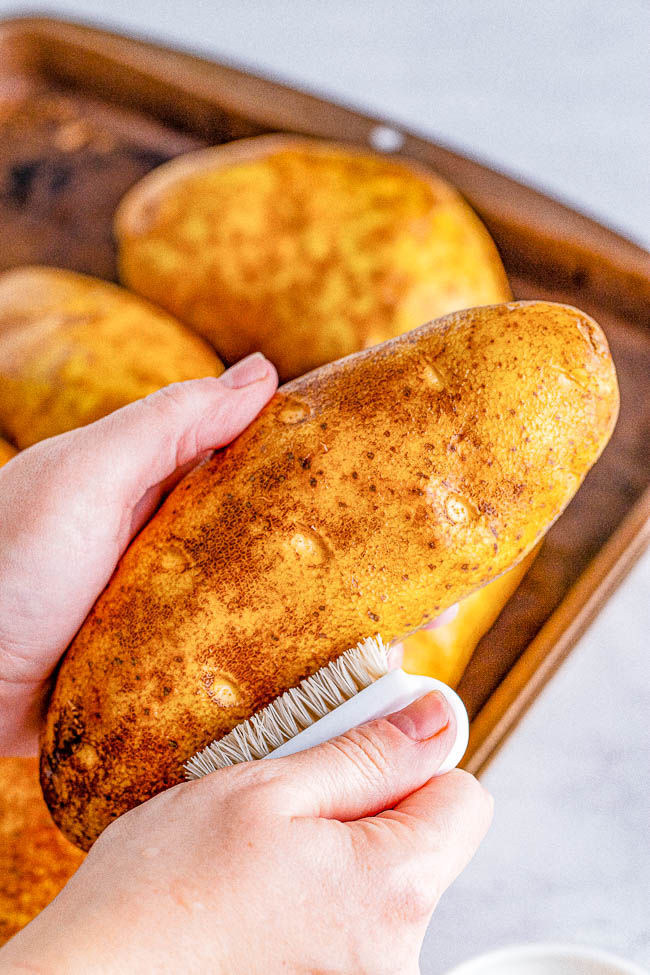 Step 2: Pierce the potatoes with a fork.

Step 3: Drizzle or brush them with olive oil. 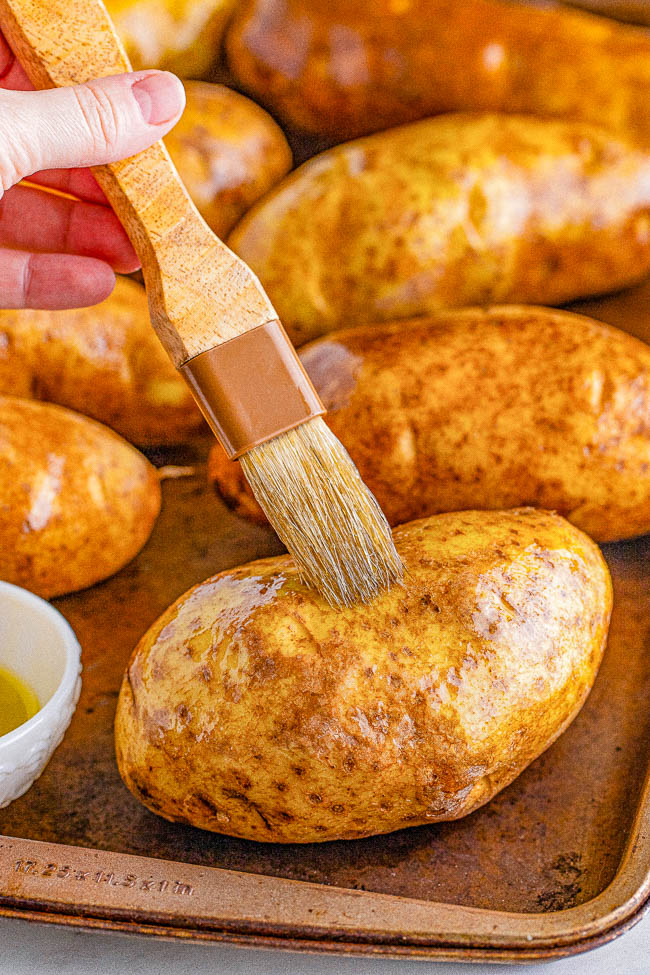 And season with salt and pepper. 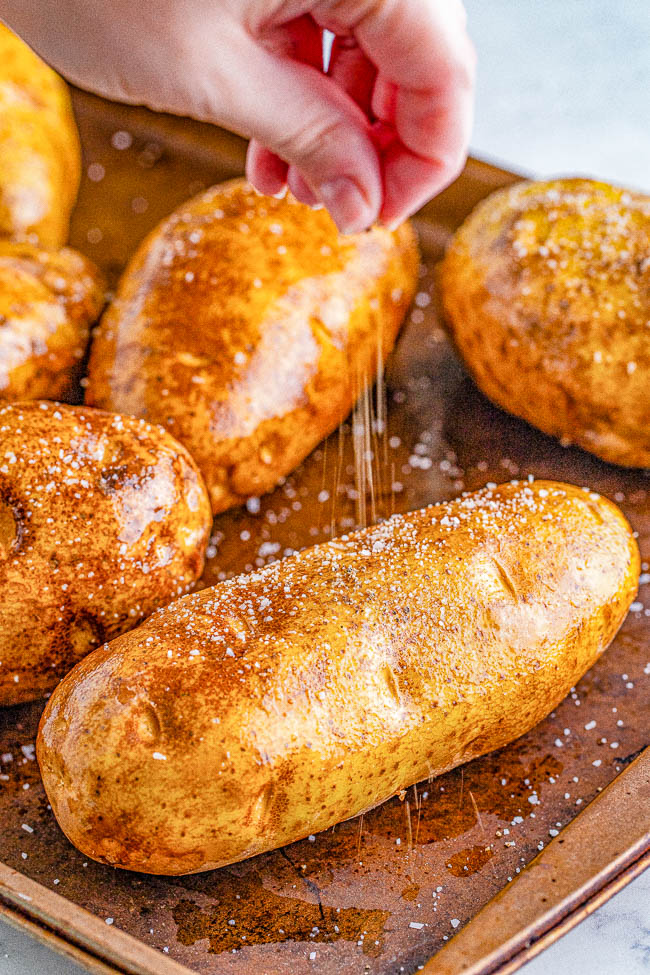 Step 5: Place them in your slow cooker and slow cook them until they’re tender before serving. 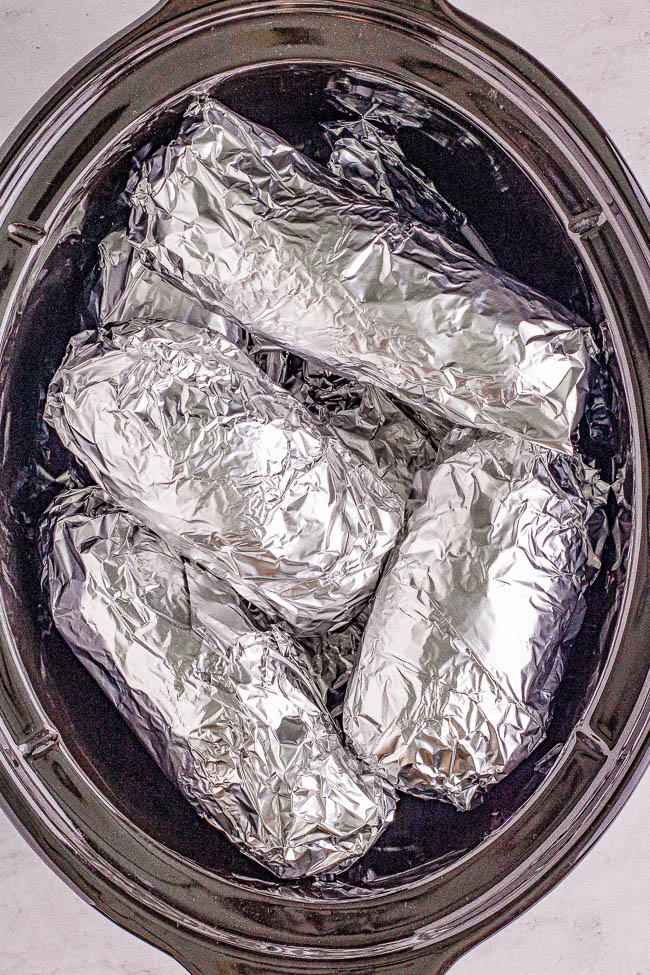 What Size Slow Cooker Should I Slow Cook Potatoes In?

For slow cooker baked potatoes, because I slow cook 8 at a time, you need to have a decent-sized slow cooker.

I recommend a 7 to 8-quart Crock-Pot, which is nearly the most common size that people own.

If you have a smaller slow cooker, then I recommend reducing the number of potatoes you make. 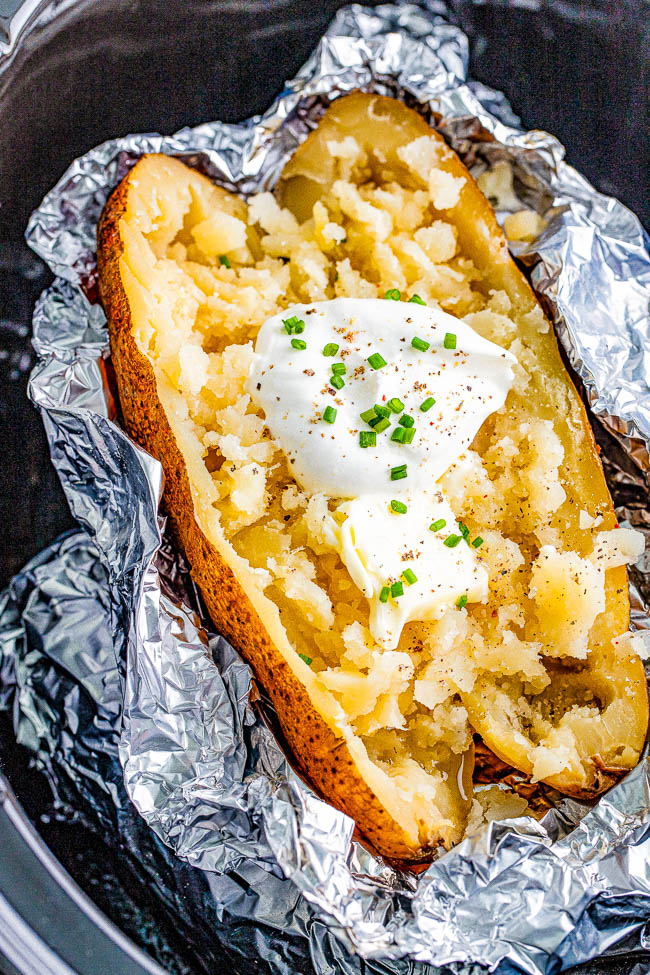 How Long to Cook Potatoes in a Slow Cooker?

You can slow cook your baked potatoes on either the high or low heat setting.

Cooking times will vary depending on the size of the potatoes. I used a medium-large size potato for this recipe. Potatoes are done when they are fork (or steak knife) tender and exhibit no signs of firmness.

Tip: To check for doneness, insert a steak knife right through the foil and into center of one of the largest potatoes. If there is no resistance, they are ready! 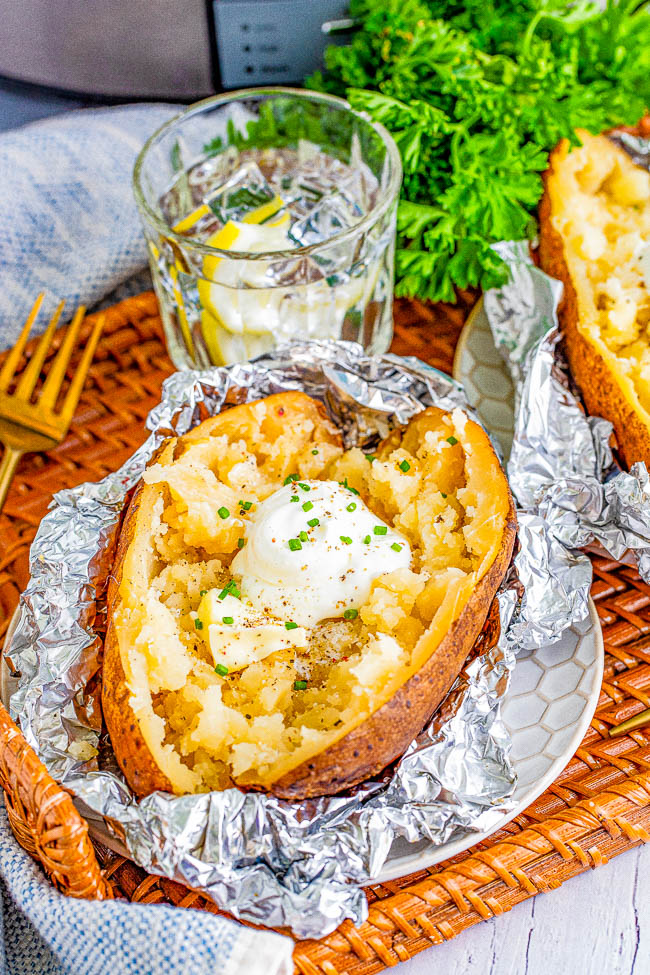 What Kind of Potatoes are Best for Crock-Pot Baked Potatoes?

When it comes to traditional baked potatoes, there’s nothing quite like a Russet potato because they are a starchy potato and bake up soft, fluffy, and just perfect.

Similarly, when talking about making white potatoes in your slow cooker, I only use Russet potatoes.

You could experiment with other types of potatoes such as waxier varieties but I don’t know the cooking time nor how the results will be. 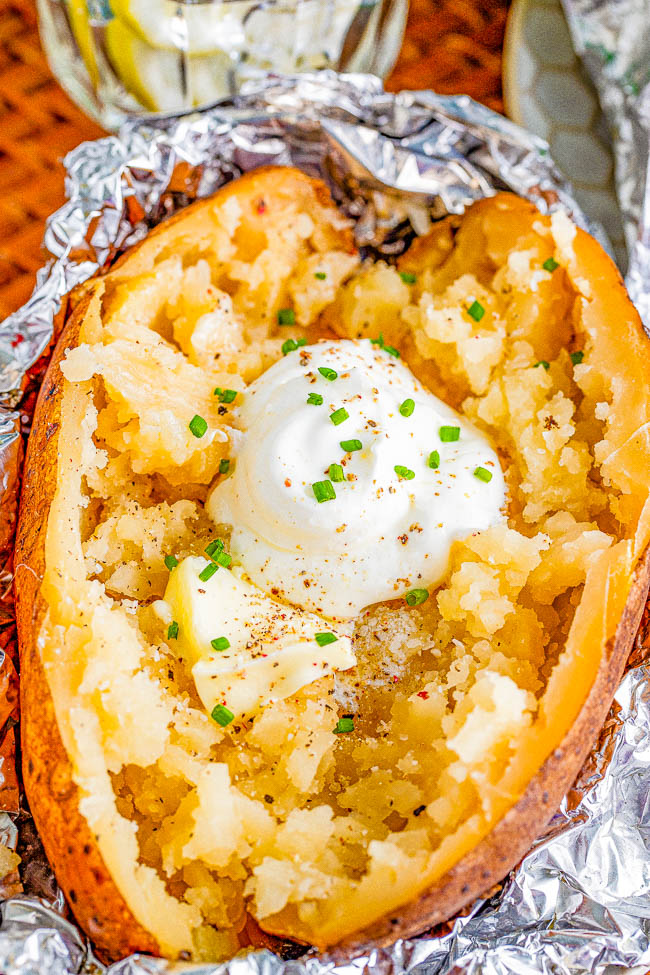 Can I Make Sweet Potatoes in a Slow Cooker?

All that being said, I do know it’s easy and very possible to make sweet potatoes in a slow cooker.

Follow the exact same steps and process as you would with Russet potatoes. 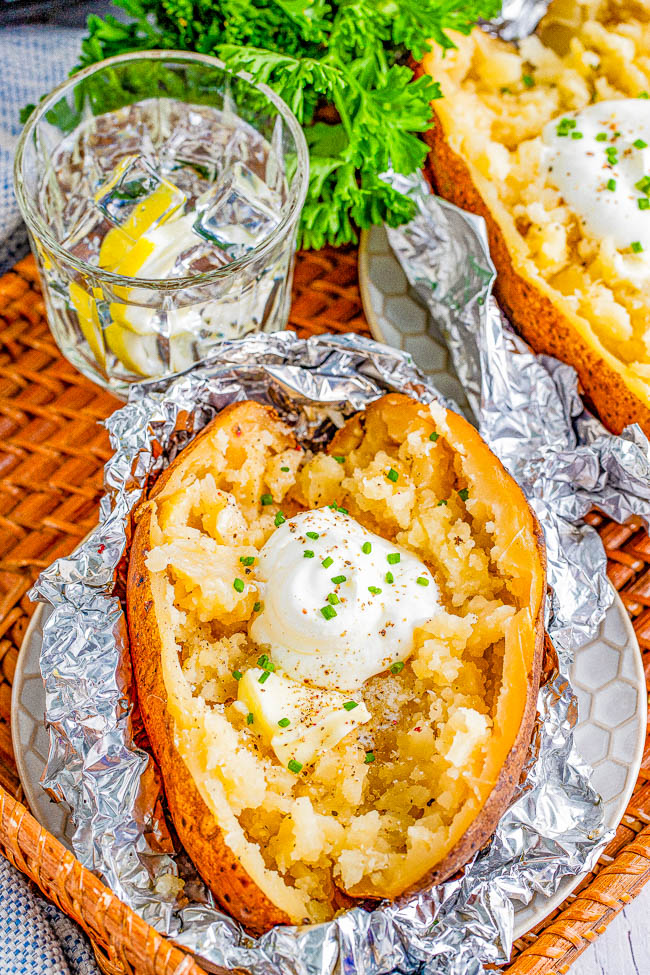 Can I Make Slow Cooker Baked Potatoes Without Foil?

I come from a long line of die-hard baked potato fans. When baking potatoes the traditional way in the oven, no one ever wraps them in foil in my family. Namely because foil prevents the skin from crisping up.

However, in a slow cooker whether you wrap them in foil or not, the skin won’t crisp up because you are essentially steaming the potatoes in your Crock-Pot.

Because of the lengthy cooking time of at least 5 hours, or more, I like to wrap my slow cooker baked potatoes in foil because it keeps the interior of the potato juicier.

My favorite aluminum foil of all time for any baking or cooking need is Reynold’s Nonstick Heavy Duty Aluminum Foil.

No other foil compares because nothing sticks to this stuff, from Grilled Pork Belly Burnt Ends to the stickiest Dulce de Leche Bars nor does it rip, tear, or shred. Worth the slightly higher price!

If you are dead set against wrapping them with foil for whatever reason, just don’t then — knowing your potatoes won’t be as moist and may seem a bit dried out. 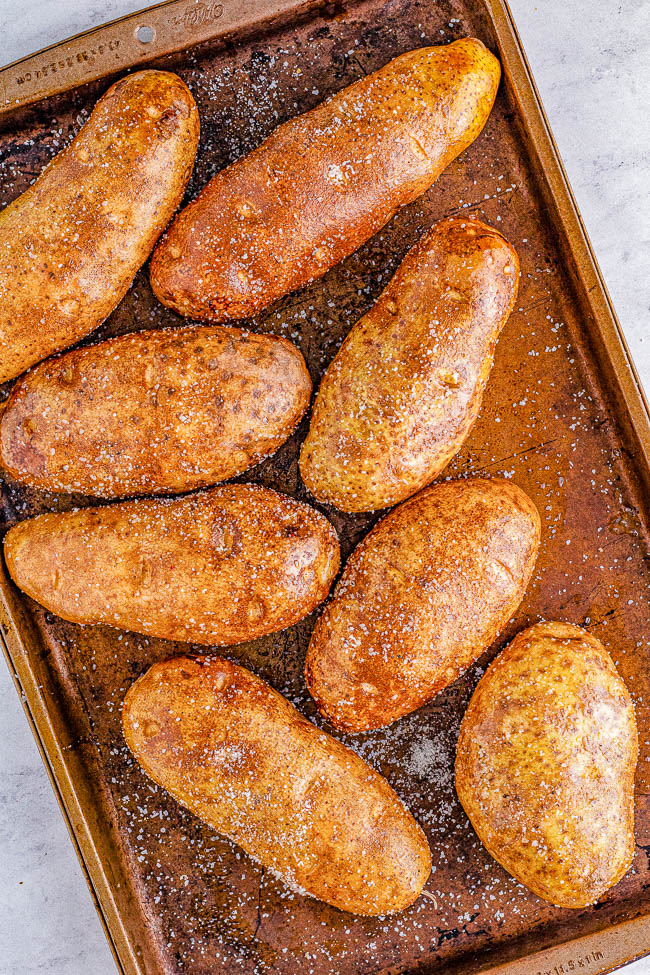 Can This Recipe Be Prepped in Advance?

Yes! After you’ve finished slow cooking your baked potatoes, you can keep them in the slow cooker on the warm setting for up to 3 hours after cooking.

This is perfect for parties or events like Thanksgiving, Christmas, Easter, or any type of holiday meal where you are trying to time your sides with the main course and if it’s a big main, such as a whole turkey, the cooking time can vary. At least you know your slow cooker baked potato side dish will be ready and can wait.

This is also nice way to enjoy the taste of oven-baked potatoes but in warmer months when you don’t want to turn on your oven and heat up your house.

I like to serve slow cooker potatoes with plenty of butter, more salt and pepper, and if you’re into it add some shredded cheese, bacon bits, sour cream, chives or whatever you like on your baked potatoes.

While you’re at it, you can make a baked potato bar with these eight perfectly slow cooked potatoes!

How to Store Leftover Baked Potatoes

Extra potatoes will keep whole, sliced, or diced airtight in the fridge for up to 5 days or in the freezer for up to 3 months.

These slow cooker baked potatoes have amazing tasting skin! I strongly encourage you to eat the skin because it’s lightly oiled and perfectly seasoned with salt and pepper, thin, and tender.

I know there are people who never eat potato skins but this is one time where you need to give it a try.

There is nothing grosser to me than undercooked, hard potatoes. If you feel any resistance at all when you pierce the potatoes with a knife, keep on cooking them.

There’s little harm that can be done such as “over-cooking” them when they’re being cooked in your Crock-Pot since it cooks at about half the temperature that you’d use if oven baking the potatoes.

Make sure to test the biggest or nearly the biggest potato for doneness and not the smaller ones.

Also, I advise medium-large potatoes of approximately all the same size so they will all cook in a similar timeframe.

This isn’t a time personally when I would select a jumbo sized potato since they will take forever to cook through!

For anyone who just can’t get enough slow cooker potato recipes, try this Slow Cooker Browned Butter Mashed Potatoes next!

*To check for doneness, insert a steak knife right through the foil and into center of one of the largest potatoes. If there is no resistance, they are ready! If there is any resistance, keep on slow cooking them. There is very little danger in "overcooking" them since a slow cooker cooks at such a low temperature in comparison to an oven. 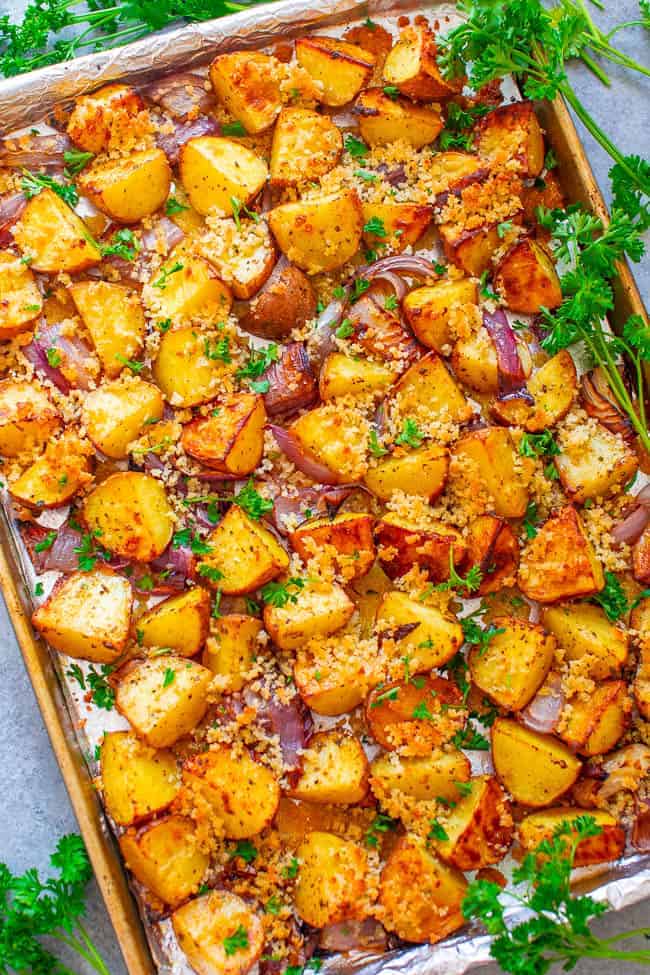 Parmesan and Herb Roasted Potatoes — These herb roasted potatoes are sprinkled with Parmesan cheese and are made with seasonings you already have on hand. So easy to prep, and crazy delicious! 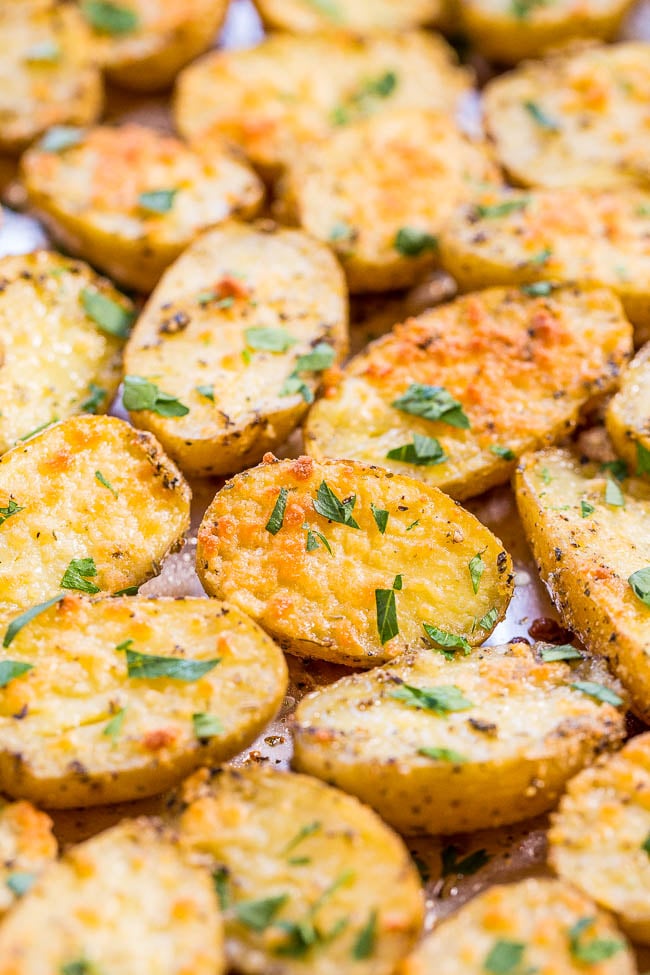 Slow Cooker Browned Butter Mashed Potatoes – Creamy and decadent from the herbed browned butter, these EASY mashed potatoes are a family favorite side dish! Made in the slow cooker to free up stove and oven space. No one will be able to resist these comforting buttery mashed potatoes at Thanksgiving, Christmas, or your next family gathering! 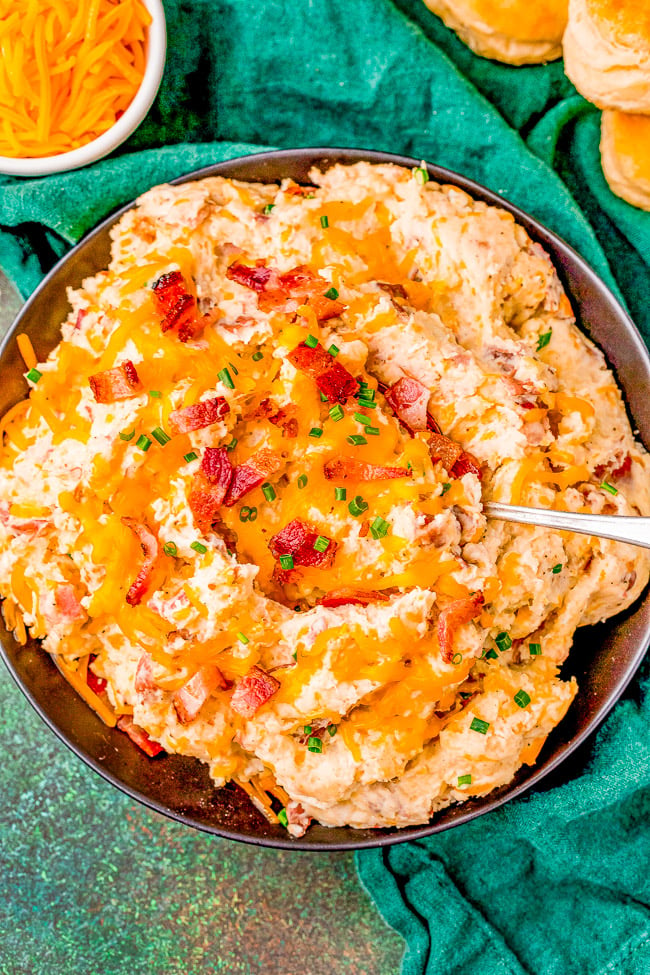 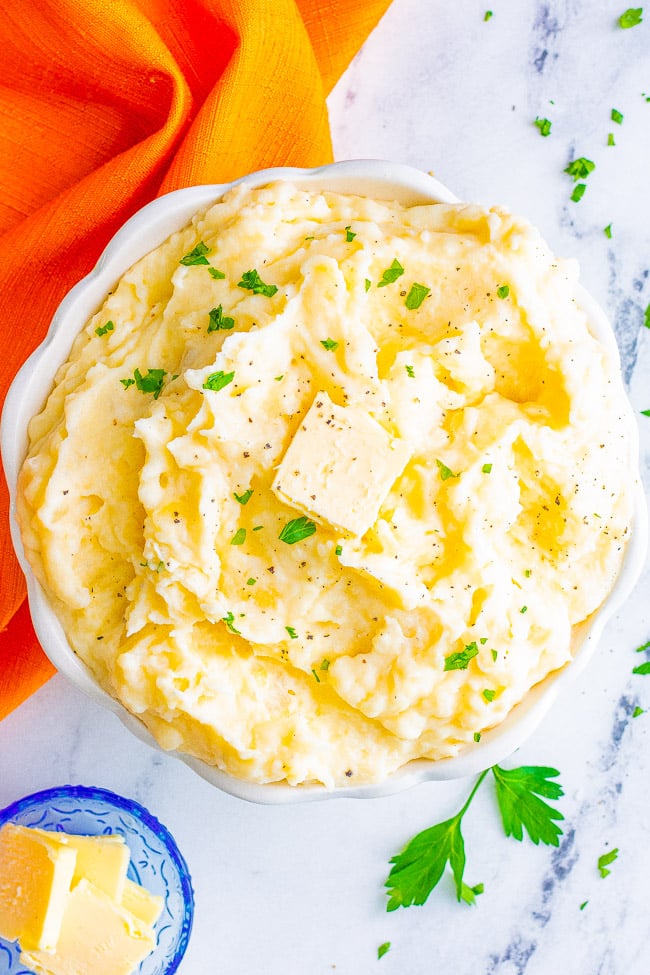 Baked Thick-Cut Seasoned Oven Fries – Learn the secrets to creating restaurant-style oven fries! They’re baked rather than fried so you can have extra! 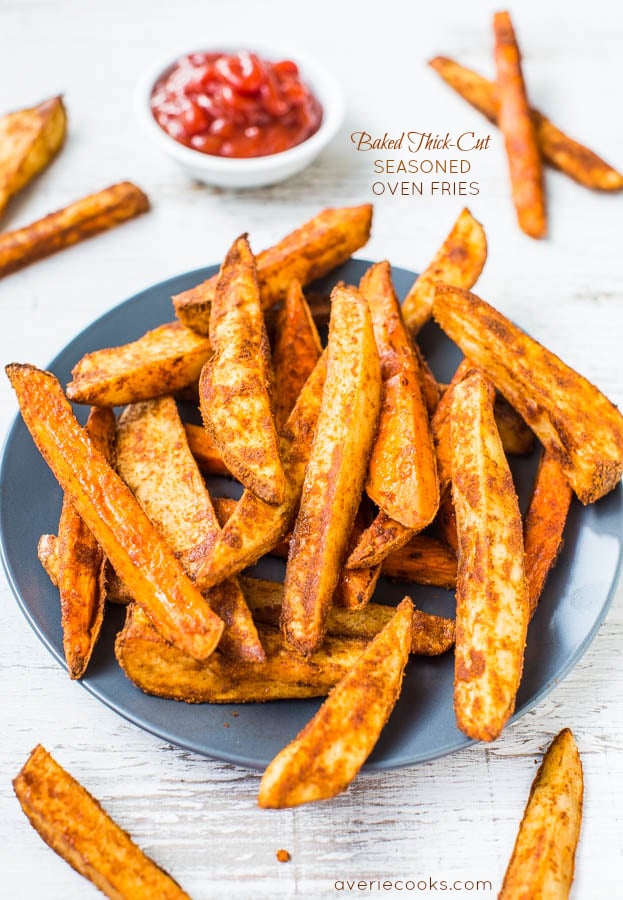 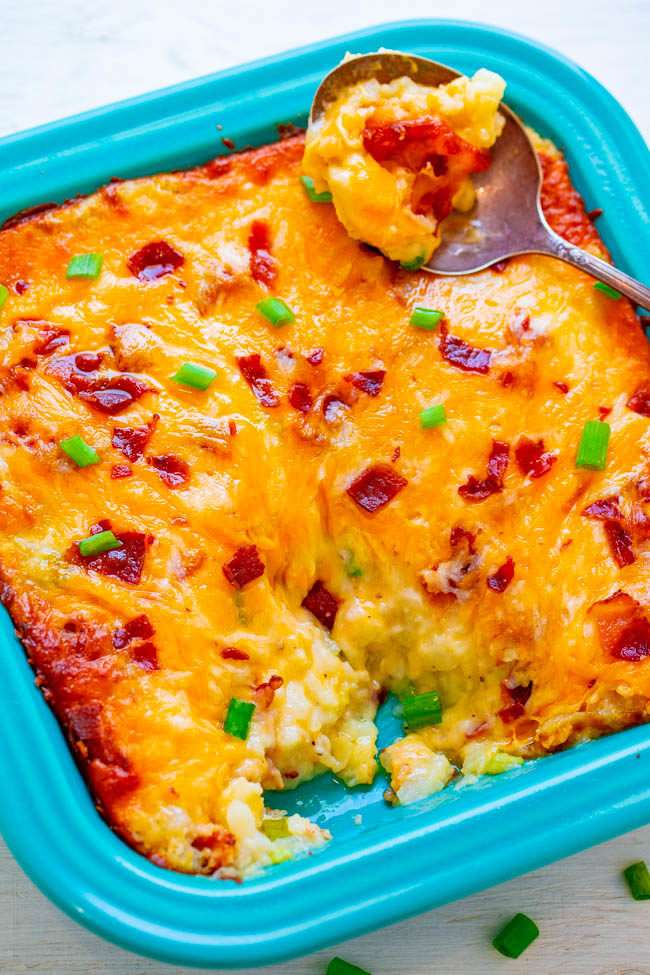 Three Cheese Scalloped Potatoes – These scalloped potatoes are EXTRA cheesy thanks to three cheeses used as well as super rich and CREAMY!! 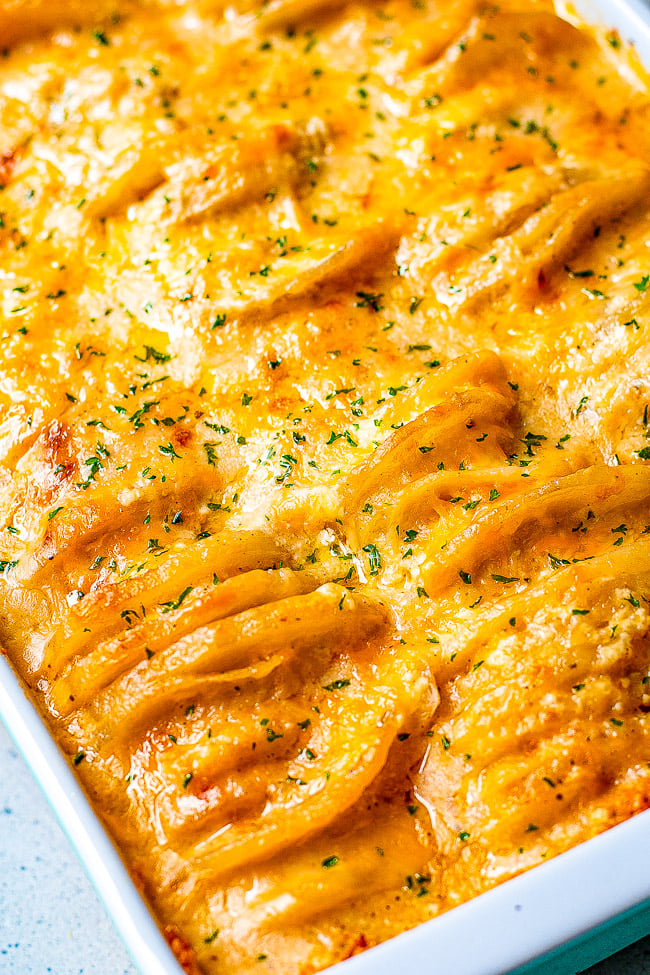