I only wish I had checked them off my list sooner because I loved every fudgy center and chewy-edged bite.

They’re one hundred percent from scratch, no cake mix, no brownie mix, no shortcuts. The recipe is adapted from Donna Hay, who’s been called the Australian Martha Stewart. After converting grams of butter to tablespoons, and using regular granulated sugar in place of superfine caster sugar, I thought I was in for smooth sailing. Wrong.

I’ve seen versions of this recipe using melted chocolate chips for the 12 ounces of dark chocolate that Donna calls for. I wanted that to work because a standard bag of chocolate chips is 12 ounces and that would have been convenient. But when I melted the chocolate chips with butter as directed, the mixture seized horribly. 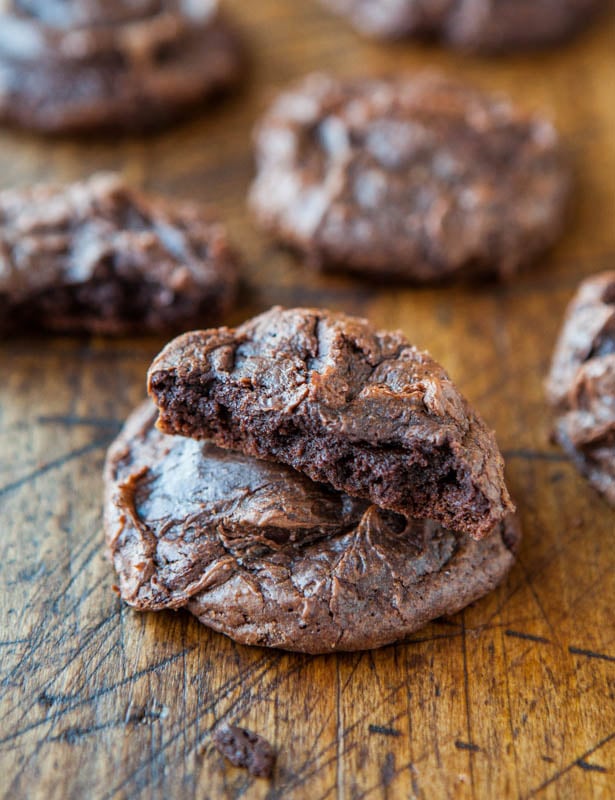 I should have known better because chocolate chips have stabilizers in them that prevent them from melting easily. This is great when used in chocolate chips cookies so they retain their chip-like shape in a 350F oven. Not great when you want them to melt into sauce with butter. The water that’s released from the melting butter turned the mixture turn into seized-up sludge. So I started over. I hate wasting butter and chocolate, but salvaged the clumpy mess and was used it as Smores chocolate.

I tried again with a 54% Dark Chocolate Pound Plus bar from Trader Joe’s, not to be confused with their 72% bar. Because there’s only 2/3 cup of sugar in the entire batch of cookies, I didn’t want to use chocolate that was too dark for fear the cookies would be bitter. I like my brownies and chocolate cookies on the less sweet side, but had read reports of others trying 72% chocolate and the cookies were bitter. 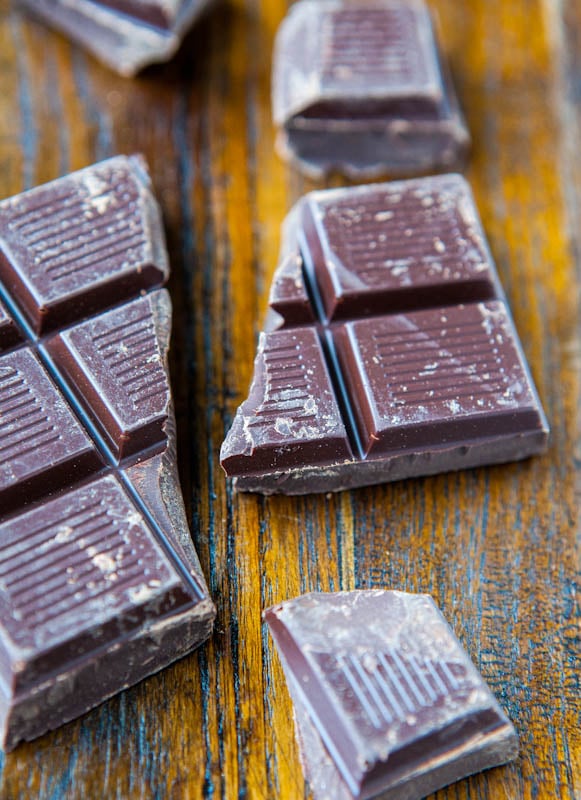 To make the cookies, combine 7 ounces of chopped chocolate from a bar (not chocolate chips as I learned) with 3 tablespoons of butter and heat to melt, about 45 seconds in the micro, and set it aside to cool.

In a mixing bowl, beat together 2 eggs, sugar, and vanilla. Donna suggests beating for 15 minutes, or until pale and creamy. That seemed ridiculously long, but I kept my stand mixer running for over 13 minutes. The mixture didn’t change in appearance after the first five minutes of beating, and I believe 5 to 8 minutes of beating is adequate. The mixture thickens up and become slightly frothy, but earth-shattering changes didn’t happen after the 5-minute mark. 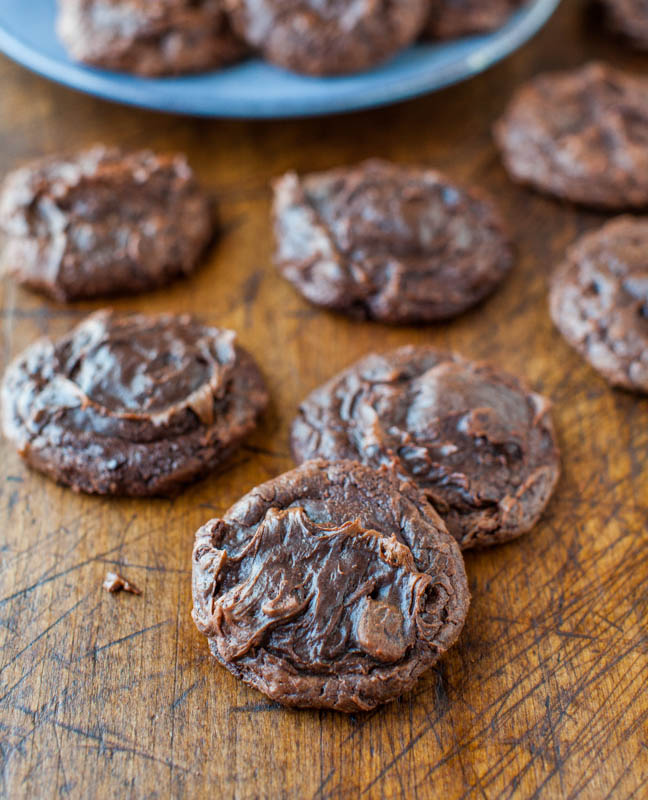 All at once, add the melted chocolate-butter mixture, the remaining 5 ounces of chopped chocolate, 1/4 cup flour, baking powder, and beat it together, about 1 minute on medium low speed.

If you’re visualizing two eggs, 10 ounces of a melted chocolate-butter mixture, and only 1/4-cup flour and the contents of the mixing bowl looking like liquid chocolate sauce, you’re visualizing correctly. I was freaking out thinking, no, please not another chocolate fail in a recipe that hasn’t even been baked! The mixture was so sloppy, soupy, and wasn’t anywhere near cookie ‘dough’. Chocolate smoothie was more like it. 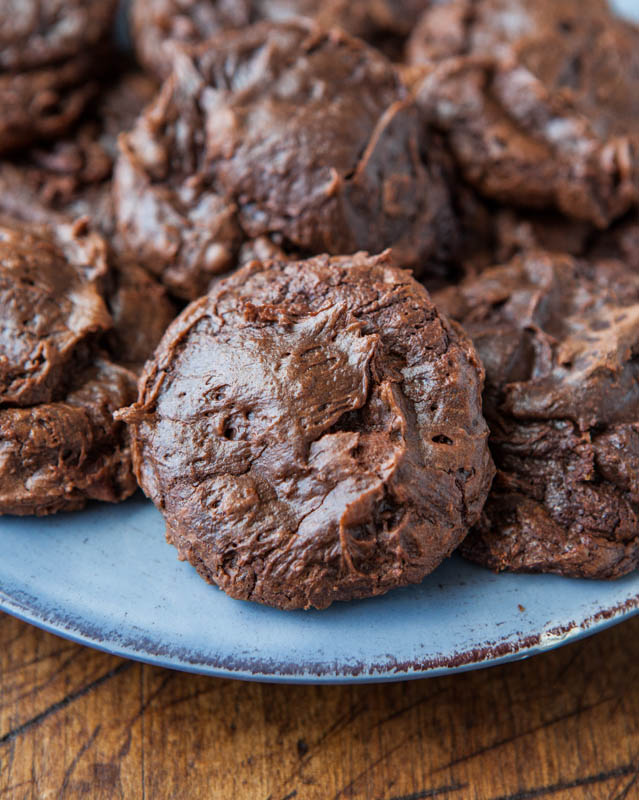 Donna’s recipe instructs to set the bowl aside for 10 minutes so the mixture can firm up before baking. After 10 minutes, there was no way it was firm enough to do anything with other than maybe insert a straw and drink the chocolate. So I covered the mixing bowl with plasticwrap, said a prayer, and left it on the counter for 1 hour.

In that hour, it had firmed up enough that I was able to use my medium 2-inch cookie scoop and scooped out 17 mounds onto Silpat-lined baking trays. In reality, it felt like I was scooping out severely melted ice cream that had been sitting out of the freezer for a few hours.

There was no way I was going to bake that ‘dough’ and allowed it to remain uncovered on baking sheets at room temperature for another hour to continue to solidify before I was brave enough to bake them. 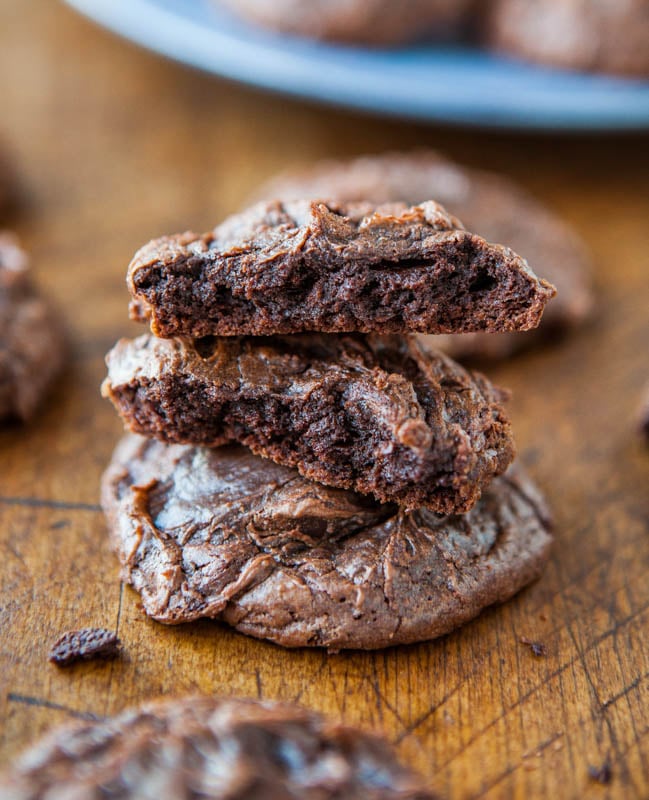 So that’s setting the bowl aside for 1 hour, then scooping out into mounds, and letting the mounds sit on cookie sheets for another hour before baking. Two hours of solidification. The 10 minutes suggested by the author would have never worked for me.

I was bracing for chocolate puddles to emerge from the oven, but much to my shock and amazement, the cookies pread much less than I expected.

I ran out of cool baking trays and clean Silpats and baked the last two cookies on unlined baking trays and they spread so much more and baked so thin and turned crispy and crumbly. The difference between baking with and without Silpat Non-Stick Baking Mats was night and day. Silpats are tacky and give cookies traction and something to grab onto so they don’t slip and slide around on a hot baking sheet, spreading and turning into cookie puddles. 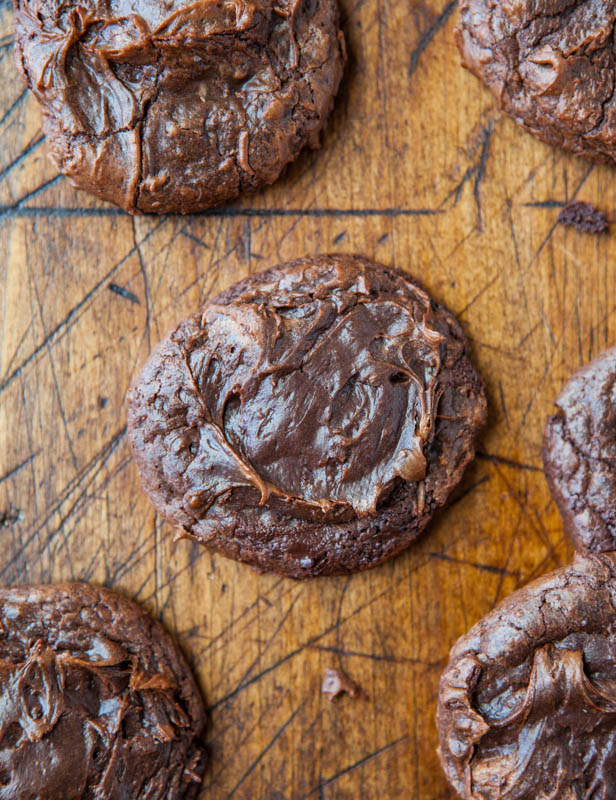 These cookies are worth everything they put me through and are the lightest, fudgiest, moistest, best brownie cookies I’ve ever tried. You’d think they’d be thick and as heavy as bricks, but they’re not since they’re nearly flourless. And they’re not cakey in the least. I don’t want cake in my brownies, cookies, or brownie-cookies.

The chocolate intensity and sweetness level of the cookies from the Trader Joe’s Dark Chocolate bar (54% chocolate) turned out to be spot-on perfect. Sweet enough, but not too sweet; nor bitter.

The 5 ounces of chopped chocolate that’s added to the batter are unexpected nuggets of bliss. It adds so much intensity and also texture. The cookies are so dark and you can’t see the chocolate, so the chunks really are heavenly surprise bites. The chocolate chunks make the cookies so rich. Like having a mini chocolate candy bar baked into every cookie. 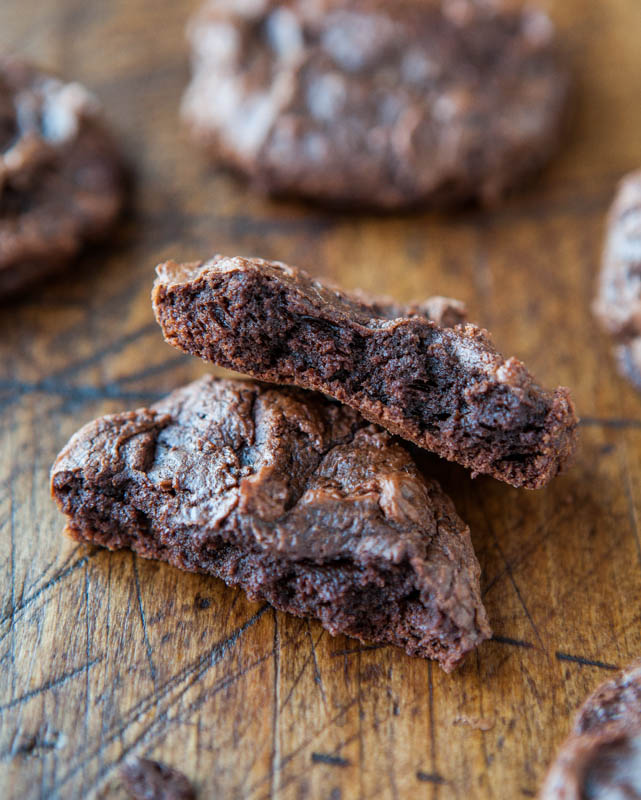 It’s worth mentioning that this recipe may not be for everyone. If you are typically prone to cookies that spread and have never mastered the art of anything close to a puffy cookie, this probably isn’t the recipe for you. And now is a great time to spend that $20 bucks on a Silpat because without one, I didn’t have success. Finally, you’ll need a cookie scoop or small ice cream scoop because there’s no way to get the ‘dough’ out of the mixing bowl and onto baking trays in a shape that’s domed enough to hold up to baking.

But they’re so worth it. They really do taste like a brownie, in cookie form. So fudgy, rich, intense, and decadent.

Now I can have my brownies and cookies in one. 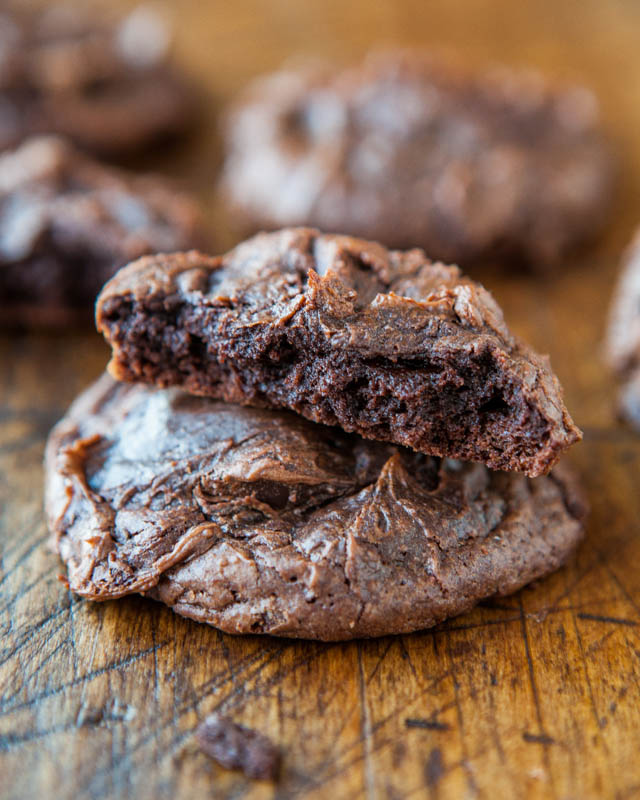 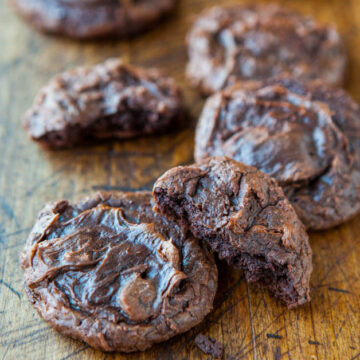 These cookies have the taste and texture of perfect brownies. They’re rich, dark, and smooth. They’re soft and tender in the interior with chewy edges. They’re fudgy, dense, and not at all cakey. Chunks of chocolate are present in every bite and make these cookies an indulgent, rich treat. They’re lighter in weight and heft, thanks to being almost flourless. It’s important to bake these cookies on Silpats or silicone mats and to use a cookie scoop to dollop out the dough, and to give the dough ample time to firm up at room temperature before baking so they cookies don’t spread. These are the best brownie cookies I’ve ever tried and would also make great sandwich cookies with frosting or ice cream filling.

Print Recipe
5
5 / 5 (1 Reviews)
Did you make this recipe? END_OF_DOCUMENT_TOKEN_TO_BE_REPLACED 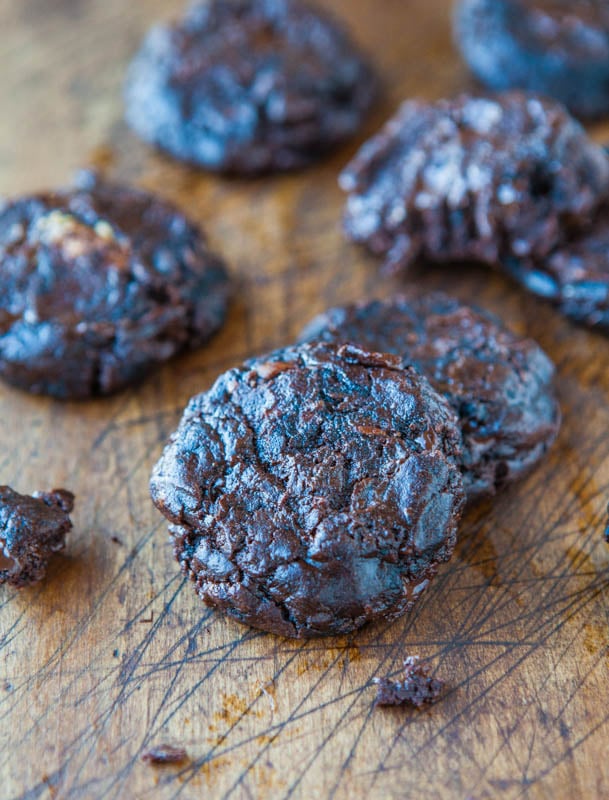 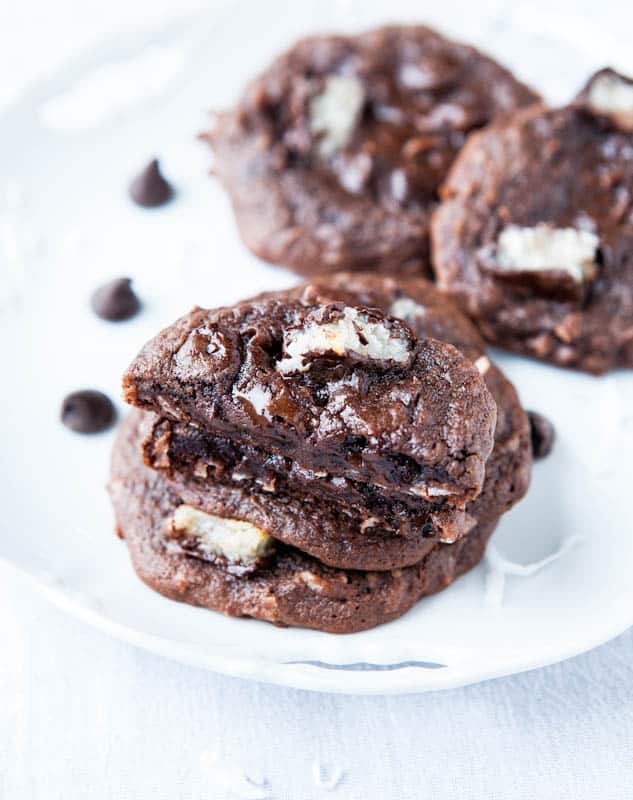 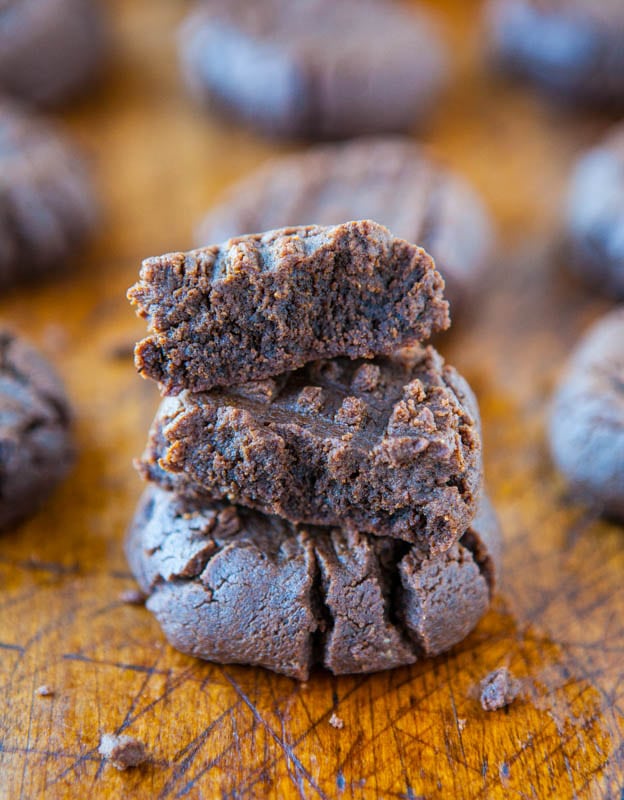 The Ultimate Fudgy Caramel Brownies – My new favorite brownie recipe. Made in one bowl with a whisk and ready in 30 minutes. The brownies are dense, fudgy, rich, supremely moist, and not at all cakey 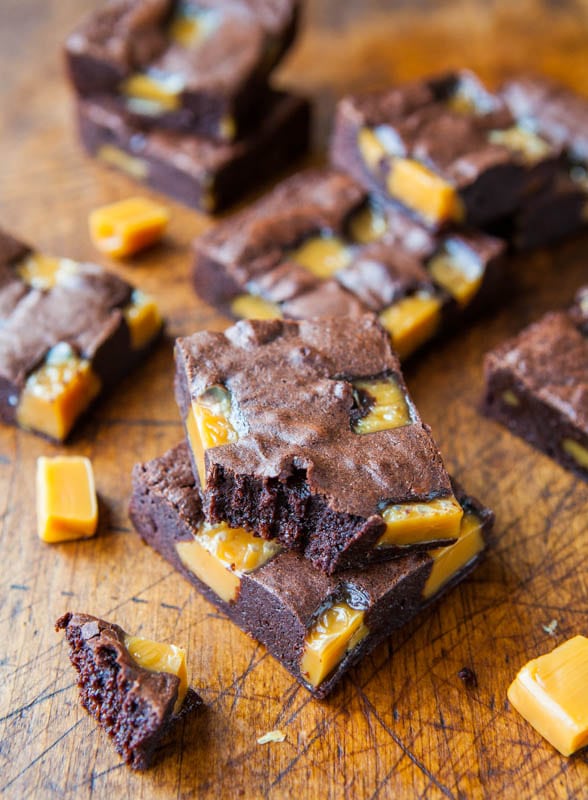 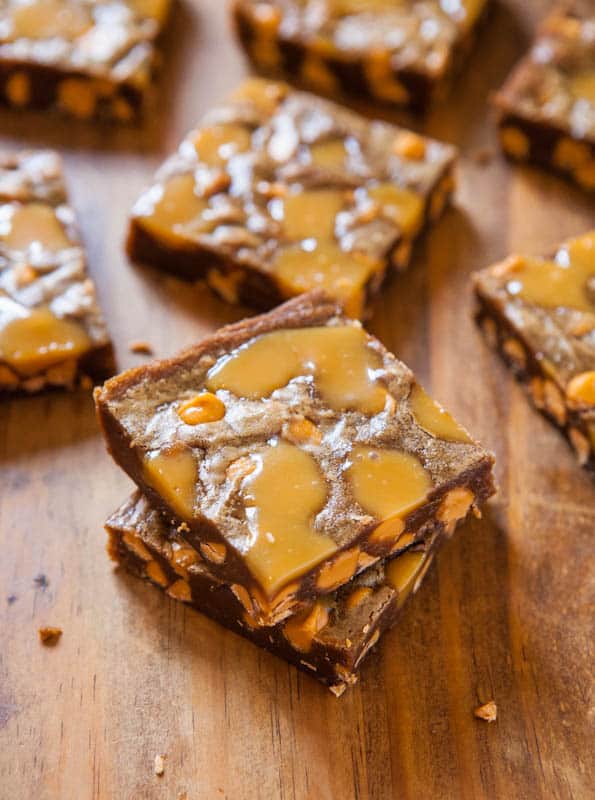 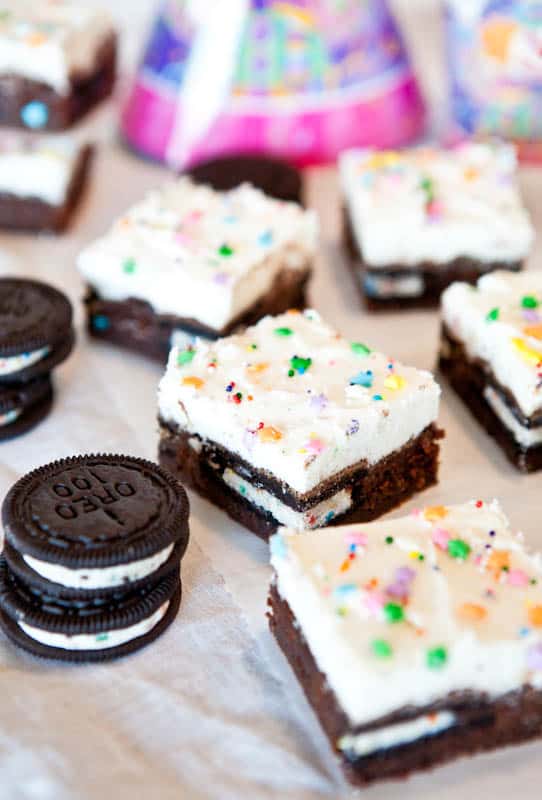 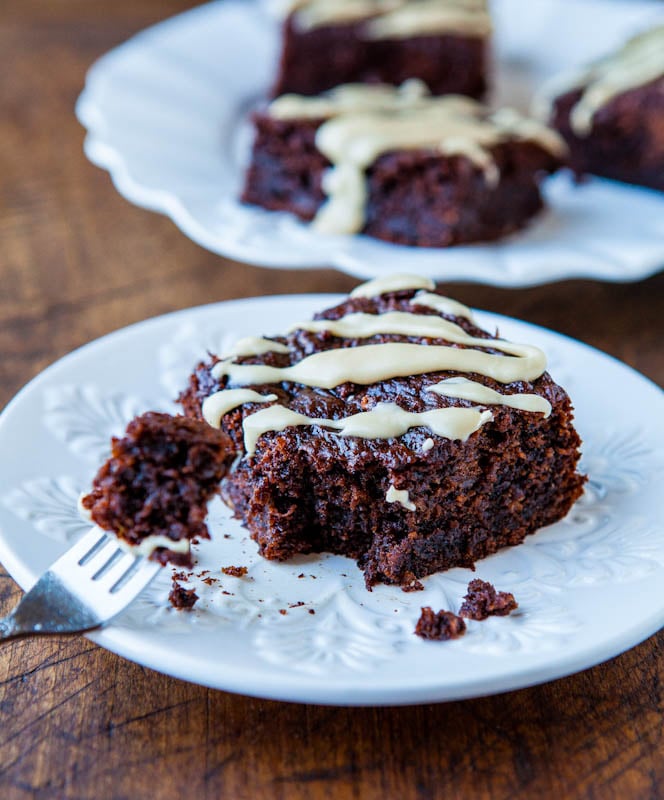 
Any recent recipe fails or almost fails? Did you save it?