Dinner last night was, surprise, surprise, a big bowl of raw veggies. Affectionately referred to as a Hugh Jass Salad by Sarah. Mine had:
*Mixed Organic Greens
*Red Pepper
*Orange Pepper
*Raw corn
*Cucumber
*Tomato
*Broccoli
It was great. I love the tried-and-trued-ness of a nice Hugh Jass. It may be Something Old, but definitely not played out. 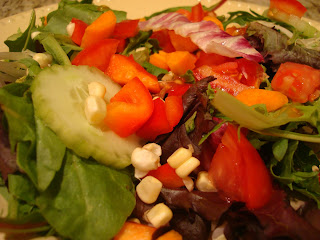 Recently, I also got a couple eggplants in my CSA box. For the life of me, I’ve been trying for years to figure out a way to prepare eggplant so that it’s either not overcooked mush (the oven method for me…hmmm, all things point to a Raw Diet for me!) OR raw and rubbery. I think I nearly hit a winner on this one.

What I did was dice up the eggplant, season with ginger, cumin, black pepper, and OJ. No oil whatsoever. Then, I pan sauteed it for literally 1 minute, added this handy dandy sauce that I mentioned the recipe for in this post, and after the sauce was on, I gave the E Plant another 30 seconds in the pan and put it in a container. Refrigerated it all day so by the time dinner rolled around, it was a cool eggplant salad. Well, it was at least chunks of E Plant on top my Hugh Jass. 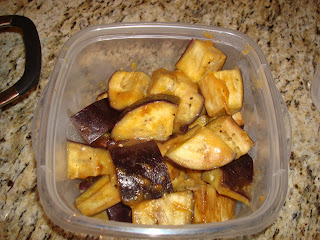 My assessment was that it was seasoned wonderfully, no soaking up a liter of cooking oil and greasy the way most E Plant seems to get, but I probably could have sauteed it another 30-60 seconds. I was so afraid of overcooking it, that I think I slightly undercooked it, but it was fine. Skylar and Scott even ate it. I was impressed that they partook in the Something New.

The Cinnamon Cumin Ginger Dipping Sauce that I slathered on the E Plant. 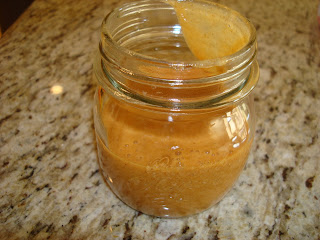 And with that, I must get back to exciting things like folding laundry and gearing up for our 5 mile Power Walk through Balboa Park. Friday nights are so interesting in the park; lots of people all gussied up attending swanky functions within the Park. And then there’s us, and the other people getting their workout in, who are sweaty and in workout attire. A dichotomous mix.

Tip of the Day: Chop your veggies ahead of time. I always have many containers of pre-chopped veggies and fruits in the fridge. This may sound like common sense, but it bears repeating. For the things that won’t go all wilty and weird on you, chop it up ahead of time. That way when you’re famished or just in a need of a quick snack to munch on, you’ve got everything in containers, ready to eat, and that bag of chips or whatever doesn’t seem any “easier” than opening your container of pre-chopped fruits or veggies. 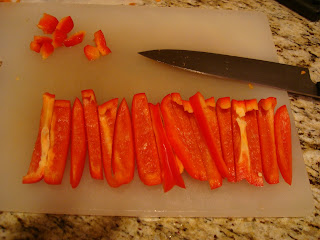