All I can say, TGIF! This is a monster post, I sure hope you enjoy it! But I also wanted to thank everyone for chiming in on the things you used to not really groove on but that now you’re into from yesterday’s post. And of course, for all the great chia chatter comments. Go say that three times fast.

Since I was on a roll with the chia seeds, I decided to try a really pared down version of yesterday’s pudding recipe. Scott was not that into the cinnamon I sprinkled in yesterday’s chia pudding version, so here was my next attempt.

Take Two with the Chia Seeds was pretty much a straight-up copycat of Angela’s recipe, and guess what, it’s really easy:
*2 Tbsp Chia Seeds *1/2 c Almond Milk *1/4 c Water *I added 1/2 Tbsp Agave & a dash of Stevia *Stirred
Here’s what it looked like at that point. I thought the green bowl nicely conjured up the mental image of a green & sprouting Chia Pet. What do you think? 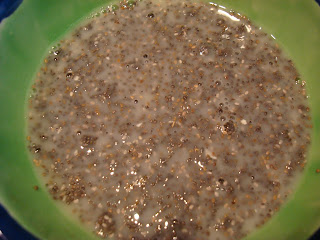 And here’s what the Chia Pet looked like coming outta da fridge about 8 hours later. 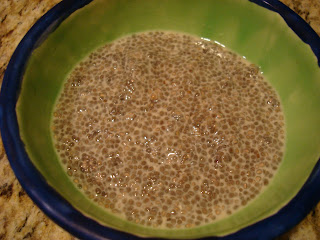 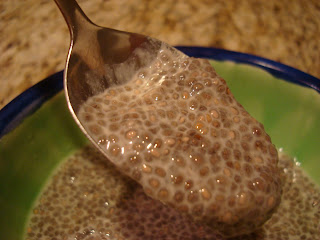 And here’s what Chia Pet looked like after I bastardized him with some frozen Cool Whip and TJ’s Dark Chocolate Chips. I mean, it’s for Scott after all. And he ain’t vegan. His verdict: Two thumbs up! Waaaay better without the cinnamon, he said. Cool, we have a winner, folks!

I know I could have made Gena’s cashew cream and there are vegan whipped toppings, but we didn’t have any of those. And this seemed to work quite nicely for hubs. 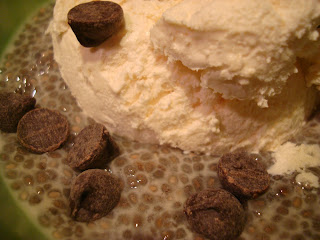 And as promised at the end of my last post, here comes the chocolate!

Now, do you think I am going to make something new for a change, or make another batch of Raw Vegan Freezer Brownies? If you guessed the former, you’re dreamin’. I love these things too damn much for a change-up. Call me HEABs and oat bran.

Here was today’s version after the Vita-Mix had been worked over harder than The Real Housewives of Atlanta work over their man for a new Gucci bag.

And here’s what the mixture looked like inside the V. For all your ladies that have written in telling me you made these in a food processor, I give you props because the Vita-Mix was shimmey’ing and shakin’ all over the counter today like I’ve never seen it do. Probably because I really loaded up the dryer ingredients today and didn’t increase the agave/liquid. Doin’ the brownie shuffle, I tell you. 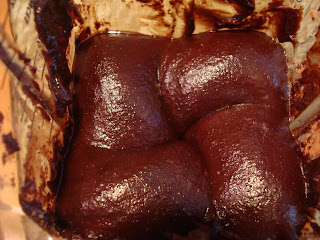 And after I scraped the chocolate thickness into the container, it went into the freezer. Why do I freeze it? Because I like too. Remember I like my watermelon frozen, too. Totally not a necessary step and room temp or fridge temp is fine for the brownies, but hey, I’m an extremeist, what can I say. 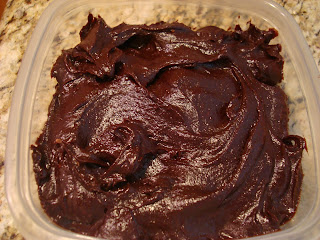 Close up of the Chocolate Love 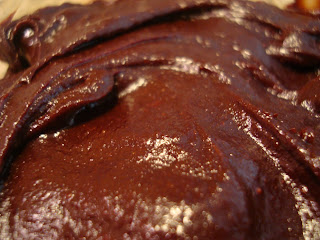 A few of my other eats from the day…and you all know I don’t post everything I eat, just the highlights, right? I mean if you think I subsist on solely raw brussels’s sprouts and chocolate brownies, you’re wrong. Well, maybe not. (kidding!)

Justine just brought this up and I thought she said it very well…just the highlights, gang. I mean are carrot sticks really post-worthy? Maybe if you eat them with my handy dandy zangy dipping sauce. Ok so there, ya go, I ate lots of carrots sticks and cinnamon ginger dippin’ sauce from this post. Take that Scott, I happen to groove on cinnamon. 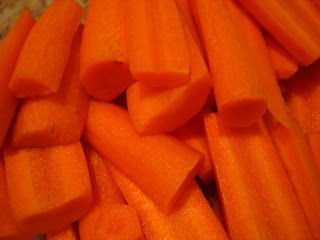 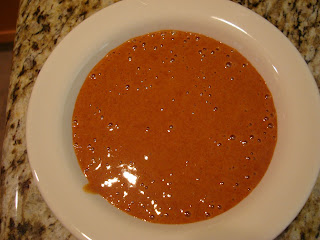 And of course, I ate a whole bunch of rabbit food. Lots of crunchy raw veggies. Here was a sqaush-a-licious platter. I am still on the squash kick and rockin’ it. 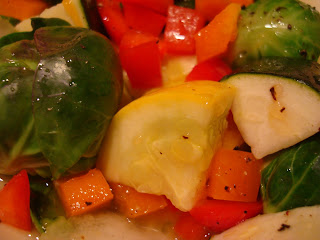 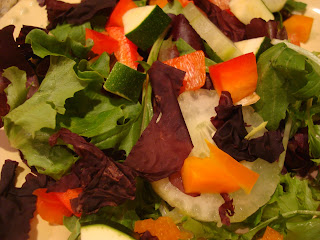 As for the rest of my day, well, my morning head clearing run and my yoga was invaluable to center me throughout the day. It was either yoga or the bottle. Mothers of small children, you know the days I am speaking of. And you’re grateful you weren’t living it.

Considering that it feels like it’s about November in my little corner of San Diego, I actually couldn’t go out for my run in a sports bra and shorts. Recently the folks at Be Present were kind enough to send me this awesome Be Present Renew Tee. 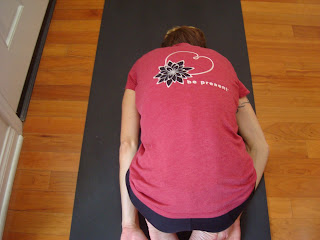 From their site: The tee is made by “melting down recycled plastic bottles and spinning the melted plastic with organic cotton. Each be present Renew Tee produced diverts three to five plastic bottles from a landfill. The process also requires little energy and water during production.”

I think it’s super cool that rather than 3 to 5 plastic bottles ending up in the landfill, they end up in my tee shirt. Which yes, is very soft. A perfect shirt now that fall is rollin’ around. It fit me really well, I am wearing a size Large, but I also don’t like my clothes skin tight. After motherhood, sportin’ skin tight tees make me self-conscious so I opt for a little more looseness and this one delivered.

Oh and as a footnote, I have a few pairs of these Be Present pants that I bought myself a few years ago, which have been washed no less that 427 times each and have literally been worn on me around the world. I kid you not. And they are still going strong. This is me in one of them. You can disregard Skylar’s face stuffing. 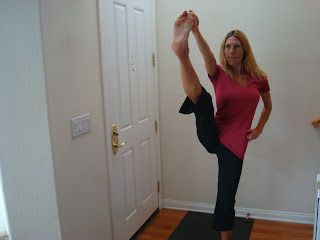 And out to the side. 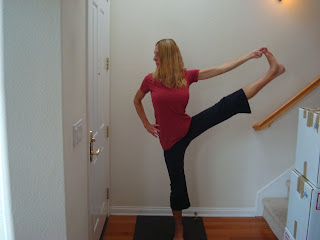 Try to make sure when you’re doing any kind of standing pose that you don’t let your pelvis become misaligned. It should be level. The temptation is to let the side of your pelvis with the raised leg, rise up. Try to ground that puppy and square it off.

Also try to keep your shoulders back and dropped. Don’t scrunch ’em up by your ears. I know it’s alot to think about, after you’re able to balance which is step one, but just some other little tweaks to remember if you can, of course based on where you’re at with your pratice. And if Tree is what works for ya, start with there!

Moving right along to headstand (sirsana) 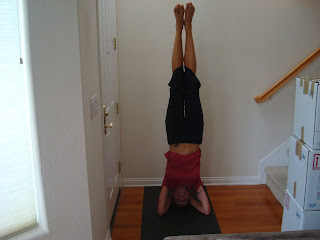 And then drop it down peeps. How low can ya go? Here’s half (arda) sirsasana (headstand). For all you in search of defined abs, oh the vanity my peeps, well, this will do the trick. Practice makes perfect if it’s a washboard you covet. 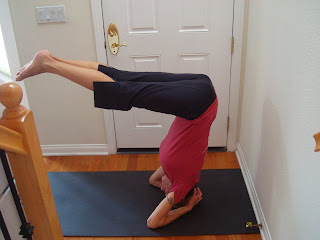 And with that sweet smile, it was time to wrap the yoga and get crackin’ on toy cleanup duty. 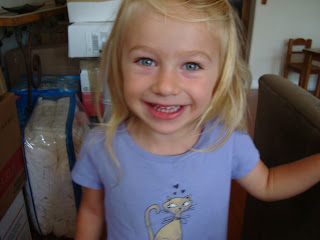 Tip of the Day: Go check out my friend RawJuiceGirl’s DVD Giveaway! Woo-hoo!