Yesterday I mentioned that I was flying to Phoenix for a day trip. Well despite packing my handy dandy snack pack for the plane, I had the Breakfast of Champions: A Starbucks Venti Drip & water. I never skip hydrating, especially after that altitude moisture sucking ability that plane rides have. 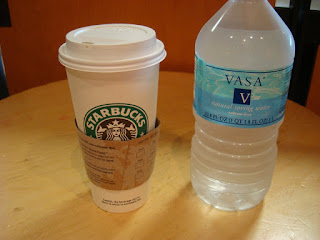 Since I was up at 4am, I can cut myself some slack on the ‘Bucks. Not to mention, I have not had Starbucks in over 2 years! Don’t think it’s because I was trying to give up coffee or was trying to make a lofty global statement and not purchase from Starbucks. Real reasons are that I brew my own coffee at home because it’s cheaper and it’s available anytime, and generally the Coffee Experience of going to get a nice, relaxing, heart-warming cup of coffee doesn’t happen with a small child. Well, it hasn’t happened for me in 2 years. For all you moms out there, what are some things that you used to do that were soooo easy, and now they are either sooo hard, or simply non-existent?

Oh one other random thing I tried to throw back for breakfast was a scoopful of Jay’s BRPP that I had in a plastic baggie. I put it in a styrofoam cup with water but that powder would not dissolve very easily…at all. I think something about the styrofoam messed up the mixability factor. Anyone else experience any mixing issues with the protein powders? What do you do about it?

After flying home from Phoenix, still going for 5 miles of cardio with Scott and Skylar and talking about the day and decompressing, I whipped up this bowl of raw yum:

*Juice of 1/2 orange & Agave for dressing 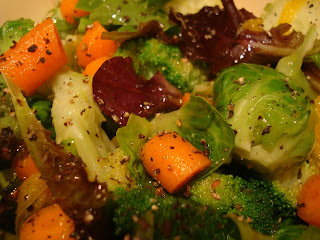 After I got Skylar to bed at a mere 11pm (she’s 2.5), oh well :) I dug into some of the raw vegan chocolate decadence I whipped up a couple days ago that was waiting for me in the freezer. 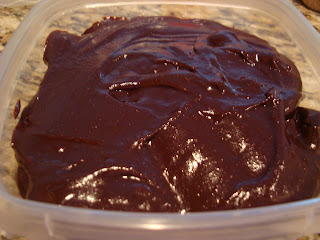 I got up this morning and centered myself by running a few miles then a nice hot & strong ashtanga practice. Very humid this morning here so I worked up a nice sweat and got rid of all my planeride toxins and germs!

Then I whipped up a Vita-Mix creation, aka Nummies, which included: 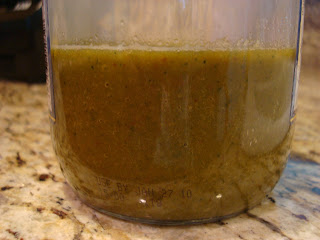 And that folks is a recap of the chaos of the past few days. Now I am on my way to get a new BlackBerry. Mine fried yesterday and is now out of operation. Just what I needed, a relaxing trip to the cell phone store. Fun times, I’ll report back about what I get.

Tip of the Day: Don’t skip your workout. Even though you may be beatass tired and the last thing in the world you think you have the energy for or desire for is your workout, in the end, 95% of the time you’ll feel better when it’s over both emotionally that you did it and physically your body will thank you. And the rest of the time, if you’re just not into it, give yourself permission to respect what your body is telling you and bow out.