So how’s Monday treatin’ ya?  Hopefully you had a nice weekend and got to get some R & R time in and pamper yourself a little bit by chillin’ out and havin’ fun!

Things ’round have been awesome in the kitch.  Lemme recap some of what went down.  Our hatchets, that is.  Aside from the Raw Vegan Chocolate Chocolate-Chip Cookies I made yesterday, here’s some of the other eats I whipped up.

Quick sidebar on those too for all you who wrote me privately wanting to make the choco cookies in a regular oven…Because the batter was very dry before I even put ’em in the dehydrator, I think if you did a very low oven like 300F (or less) for 5 mins and then let ’em sit in the oven with it off for another 5 mins or so, but please play around with this, that’s a strategy that I could totally seeing working if you don’t have your hands on a Magic Box….yet.

First up for the eats we have oatmeal, but this is not just any ordinary oatmeal.  These oats are stacked to the max.

Let’s review that mountain ‘o joy from the bottom up:
1/2 c dry oatmeal cooked with a half a nanner in lowfat vanilla almond milk.  Stirred in cinn & brown shug after the oats were cooked.  That’s the base layer. 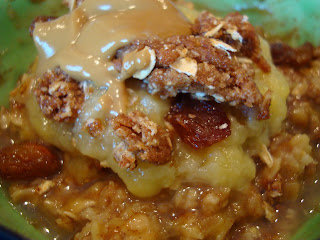 On toppa the oats is the other 1/2 of banana in the form of Banana Brulee.  Thanks to Miss Chocolate Sweetie Pie Katie for her hot tip.  Essentially a nuked nanna but I also added a tablespoon of almond milk to my Nanna Brulee.
Speaking of Katie, she has an “Amazing” GiveAway goin’ on so go check her free shizzle out!

For the brulee, it’s super easy.  Just cut up the nanna a bit and nuke. 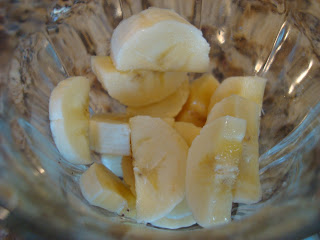 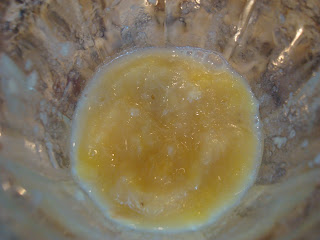 Back to the oatmeal layers….
The, brulee.
Then, there’s some raisins.
Then, some leftover Raw Apple Crumble Topping crumble mixture.
Then, a schmear of Sun Buttah…
Lookie at that Mound of Oatmeal Decadence 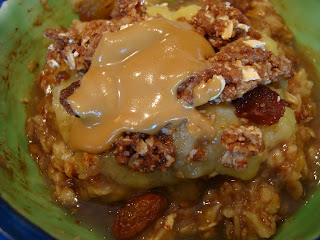 And wait, where did that Cool Whip come from?  Scott’s not vegan so he likes to roll with some ‘Whippy. 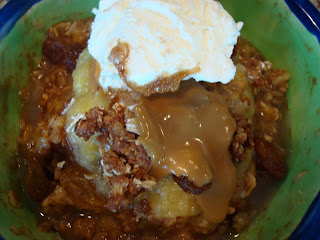 Moving right along to some dinners.  This one was a bed of spiralized zuke noods, greens, and on toppa that was aspar grass, B.S., tomato, red & yellow pepps, dressed with the juice of 1/2 orange, agave, and black pepp. 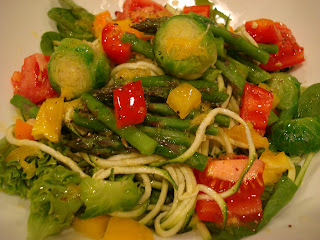 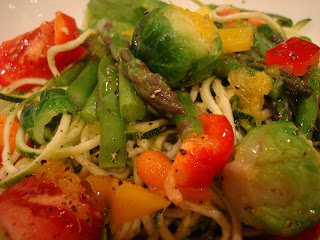 Also still were groovin’ on the Raw Cuke Wraps stuffed with red & yellow pepps, carrots, on a bed of greens and other chunks ‘o zukes, cukes, and more pepps. 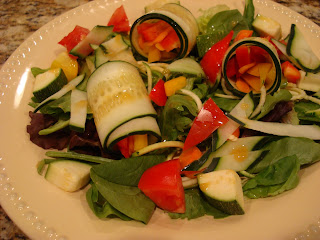 ….And more of the sweet & fun stuff again.  Here, I popped a tray of sliced nannas into the Magic Box 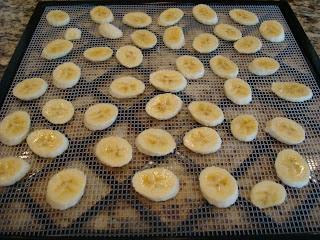 And then, after 6 hours they looked like this.  I have to say, just dehydrating the nannas somehow makes them taste and remind me of my grandma’s banana bread.  And since she’s been gone for 10 years, the taste memory is awesomely powerful, in the best way.  They get all warm and gooey and even sweeter. Luv It! 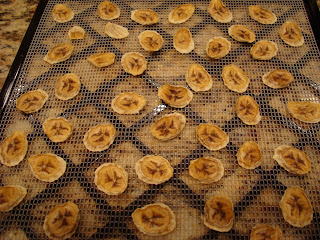 But here’s where the real fun recipe comes in….

Averie’s Raw Vegan Apple Carrot (Pan)Cakes
I write it as (pan)cakes because you can either fix these as pancakes, or as little round breads or sweet cakes, maybe with a little dab ‘o nut buttah or jelly on toppa one, or eat like a cookie, or like a sweet bread.  Lotsa options, peeps.

I came up with this recipe from the wonders of my own brain cells during a 5 mile run in the 104F heat.  My brain cells weren’t fried, because this one worked beautifully.  My goal was to create a sweet cake, that had a minor carrot cake vibe goin’ on, and I succeeded!  I’m 2 for 2 with the dehydrator (see yesterday’s raw vegan double choco cookies if you missed ’em) but who’s keepin’ score…

Averie’s Raw Vegan Apple Carrot (Pan)Cakes
First, 2 c of oats and ground ’em up in VitaCrusher + 2 c almond meal that I combined in a bowl 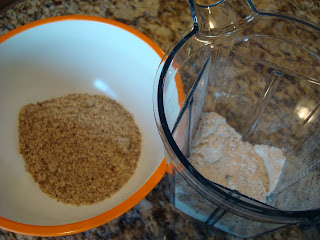 Then, I threw a dozen baby carrots, 1 cored apple, 1/2 banana, 1/4 c maple syrup, 1/4 c agave, dash of cinnamon & vanilla extract, and 2 tbsp vanilla almond milk in the VitaWhiz( If re-making this, I would not add the nut milk til I was certain I needed the extra liquid…which I really didn’t but no biggie, I worked it out) 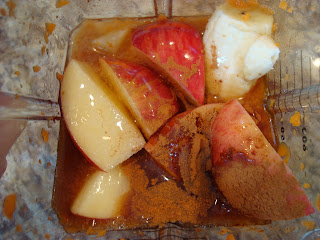 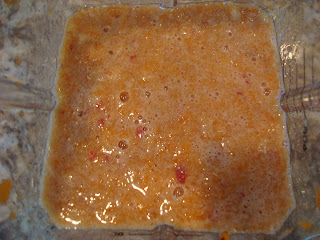 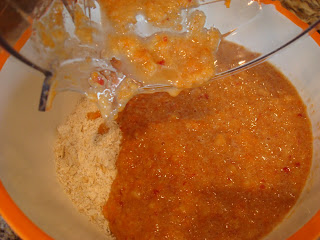 Couple quick stirs with a spoon to incorporate 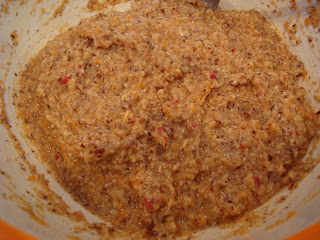 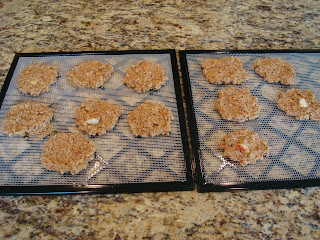 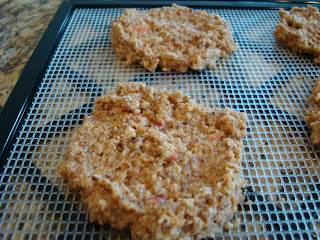 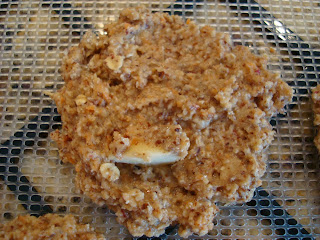 And then I slide the 11 little pancakies I got outta this recipe into the Magic Box at 118F for about 7 hours.

Before everyone writes me and tells me they’d love to make this recipe but can’t because they don’t have a dehydrator, you can still make it!  Seriously, the batter would be perfect, lightly fried up in maybe some coconut oil or other oil, just like you’d fry up regular pancakes.  Or, you can could pour these into muffin tins and bake in the oven for a pancakey-cookie-muffin creation, and I bet a little PB & J on the little muffies would be fab.  So, there’s options for you, my loves.  Dehydrator or not.

Here’s the dirty dozen minus one comin’ out the Excal 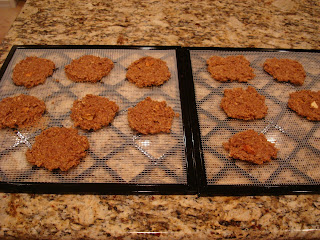 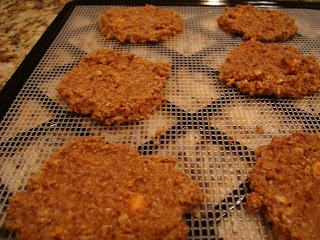 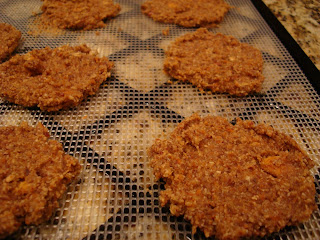 Then I made a coupla stacks and tupperware-ized ’em 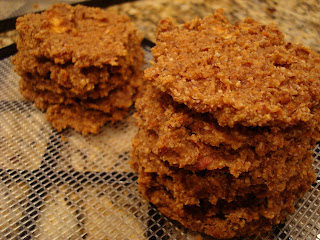 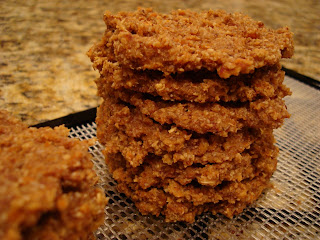 And here was brekkie Sunday morning, all loaded up in real maple syrup, with a half ‘o sliced nanner on top, dash of cinnamon, and a few raisins sprinkled on for good luck.  Freakin’ ahhh-mayyyy-zingggg!  Note the syrup pool at the bottom.  Slurp. 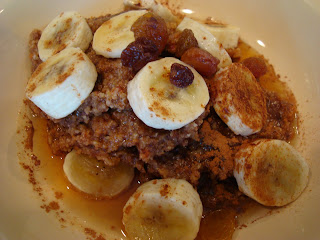 And wait, for the non-vegan, some ‘Whippy dolloped on top. 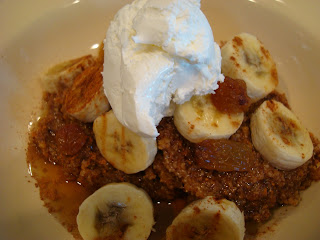 The verdict:  The best breakfast in years! 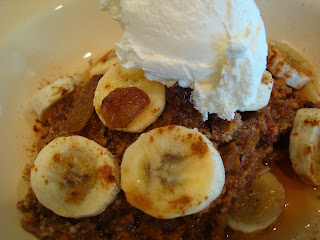 I can’t wait to hear who makes this recipe…please do, and tell me all about it!  Remember, you can make the batter and then bake in the oven or griddle things up on the stovetop.
:)
Averie

Tip of the Day:  Nominations for the 2009 Food Buzz Food Blog Awards are open!  If you haven’t voted already, go do so!  Click on through and under step 6. there’s a very tiny little clickable link, that’s where you enter your nominations.  You don’t have to vote in every single category, and I just cut and pasted the URL’s of the bloggers I was voting for in each category.  I didn’t bother filling in their full name, just their URL (hope that’s ok!) so it only took me 5-10 minutes.  I really encourage everyone to vote!  Successful bloggers put alot of time, energy, heart & soul into their posts and their blogs, so go pay ’em back with your votes!  Please Go & Rock the Vote, Peeps!

Posted in: All Recipes, Pancakes