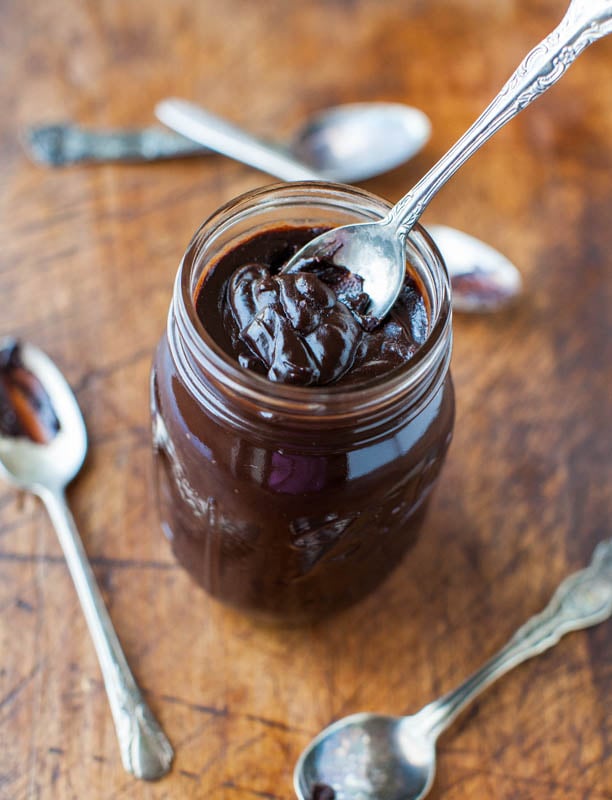 To be totally honest, I don’t love ice cream — it’s hot fudge that I really want. I work around the ice cream just to get to the hot fudge. I’m good with a spoon like that.

So I went into the kitchen, and 10 minutes later was shoveling spoonfuls of warm, rich, deeply chocolaty hot fudge sauce into my mouth.

After making your own homemade hot fudge, a brown squirt bottle of store-bought chocolate syrup will never do. Even some of the gourmet varieties of store-bought hot fudge sauce pale in comparison. They’re either too sweet, too lackluster, or don’t have enough chocolate intensity. And taste notwithstanding, it’s more economical to make your own. And more satisfying and gratifying!

It’s the Homemade Peanut Butter principle. Once your try homemade, a whole new world opens and you’ll wonder why you haven’t always been doing this. For most things, homemade trumps store-bought, and for peanut butter and hot fudge specifically, it’s truly a night and day comparison.

Some people will really love this over ice cream. I happen to really love this with a spoon at midnight. It’s so fudgy, rich, decadent, and stops my chocolate cravings dead in their tracks.

The batch makes just one 16-ounce jar, which is probably good. Because there’s only ten minutes standing between you and this. 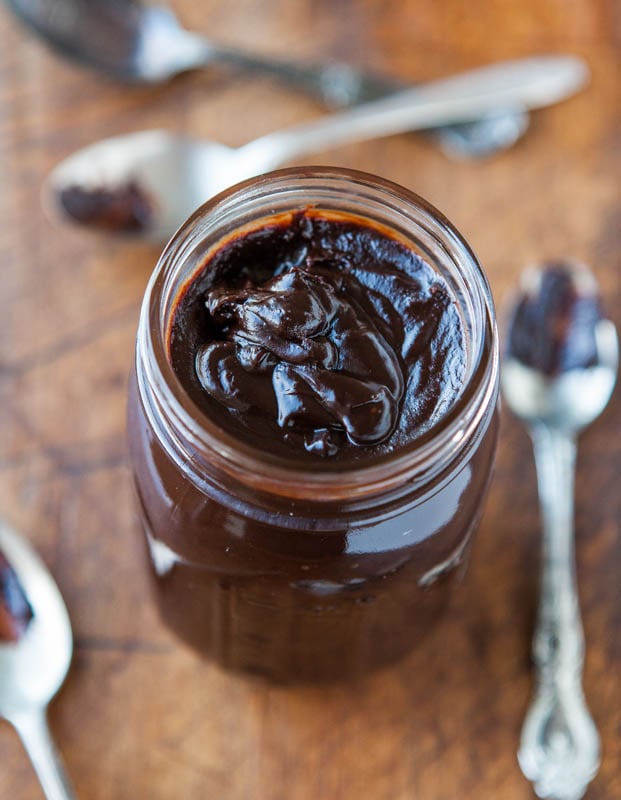 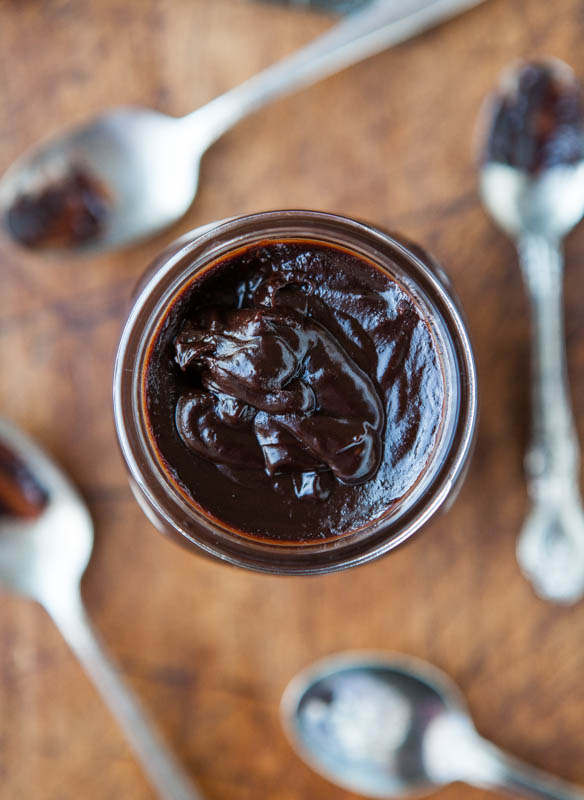 How to Make Hot Fudge Sauce

First bring the cream, corn syrup, brown sugar, cocoa powder, optional salt, and half the chopped chocolate to a boil in a heavy saucepan over moderate heat. Stir frequently until the chocolate is melted, then reduce the heat and cook at a low boil for 5 minutes.

Turn off the heat and add the butter, vanilla, and remaining chocolate. Stir until smooth, and then let cool for a few minutes before serving. This hot fudge keeps for a while, and I’ve listed my exact instructions for storing it down below. 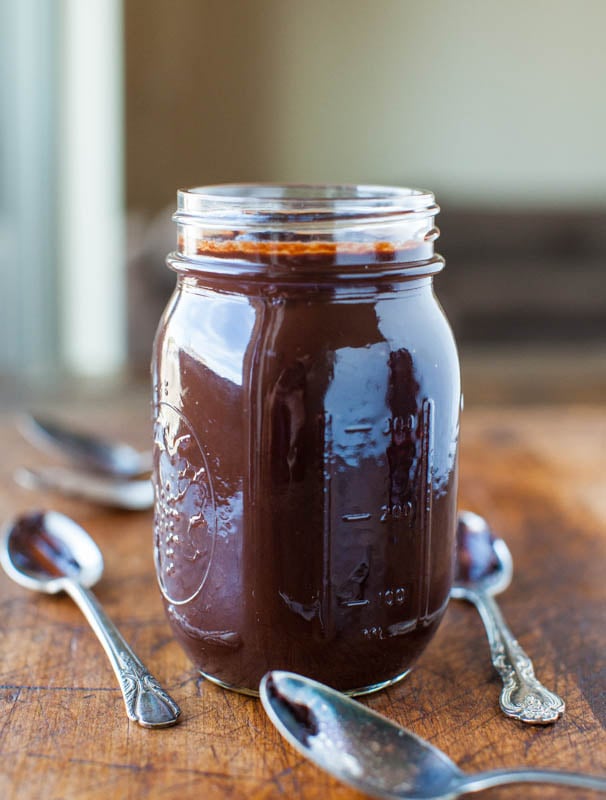 How to Store Hot Fudge Sauce

This homemade hot fudge will keep for a month in the fridge unless you eat it all in the first two days, which is a very real possibility. I have been storing mine on the counter at room temperature for two weeks and it’s fine.

I’m sure someone will ask me about refrigeration for gift-giving. I don’t know, so do what feels right to you. To me, the extensive boiling process renders this okay to store at room temp, but store it how you’re comfortable!

If you do store it in the refrigerator, it’ll firm up and can be reheated before serving. I recommend scooping some into a small cup and nuking that portion for 15 seconds rather than reheating the whole jar over and over. This will keep the rest of the hot fudge sauce fresh and will prevent it from clumping up from being reheated time and again. 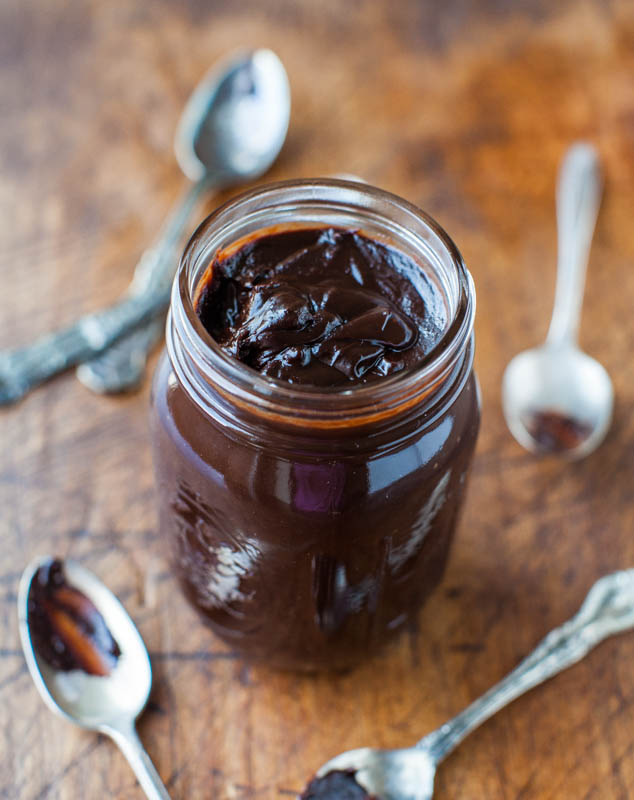 Tips for the Best Hot Fudge

I used unsweeetened natural cocoa powder, but Dutch-process may be used. I’d also like to try it with Hershey’s Special Dark, but I can’t find it locally in San Diego anymore.

I didn’t sift the cocoa powder, but probably should have because it was pretty lumpy and it took quite a bit of stirring to smooth it. If your cocoa is particularly lumpy, sift. If not, don’t worry about it.

The resulting fudge is just sweet enough while being robustly and intensely chocolaty. It’s full-tilt on the chocolate oomph meter and it’s so very satisfying.

It’s thick, dense, and not runny or thin. If it sets up too thick for your liking after it’s cooled, add a drizzle more corn syrup and stir to thin it out. I’d rather have my hot fudge thick enough that when I turn it upside down on a spoon, it hangs on. Also keep in mind that when you reheat it for future uses, it naturally thins from the heat. 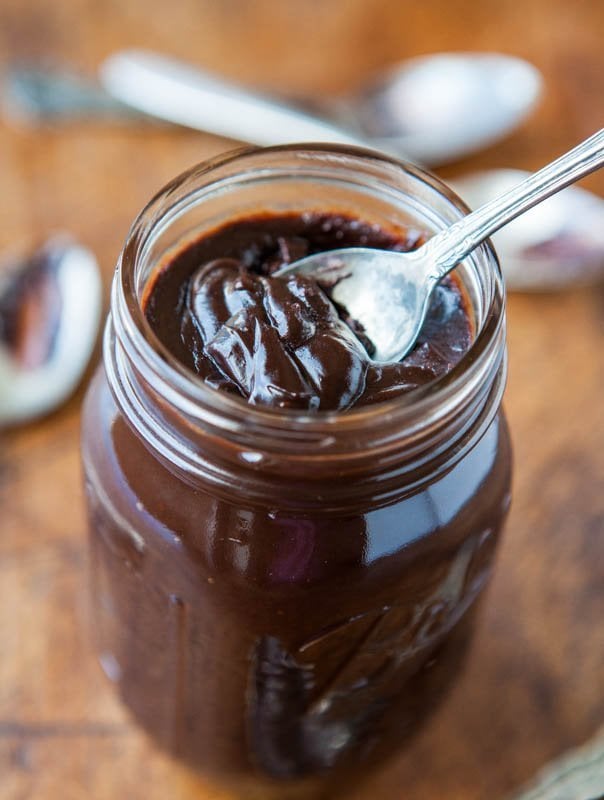 Do I Need To Use Corn Syrup?

Yes, you need to use corn syrup for this recipe and this ingredient cannot be omitted or altered. **

I have never experimented using another liquid sweeter such as honey, maple syrup, or agave nectar, nor tested the recipe in any other way other than in which the recipe is written, so I advise following the recipe exactly for best results.

*Since the time I originally posted this recipe in 2013, I have had a reader use honey rather than corn syrup because of a corn allergy, and she said the honey worked fine and the hot fudge set up perfectly. I haven’t tested honey personally in this recipe, but if you’re feeling experimentational you can give it a try.

**I also had a reader in 2022 mention she used sweetened condensed milk rather than corn syrup with great results. I haven’t tried this but am sharing the information. 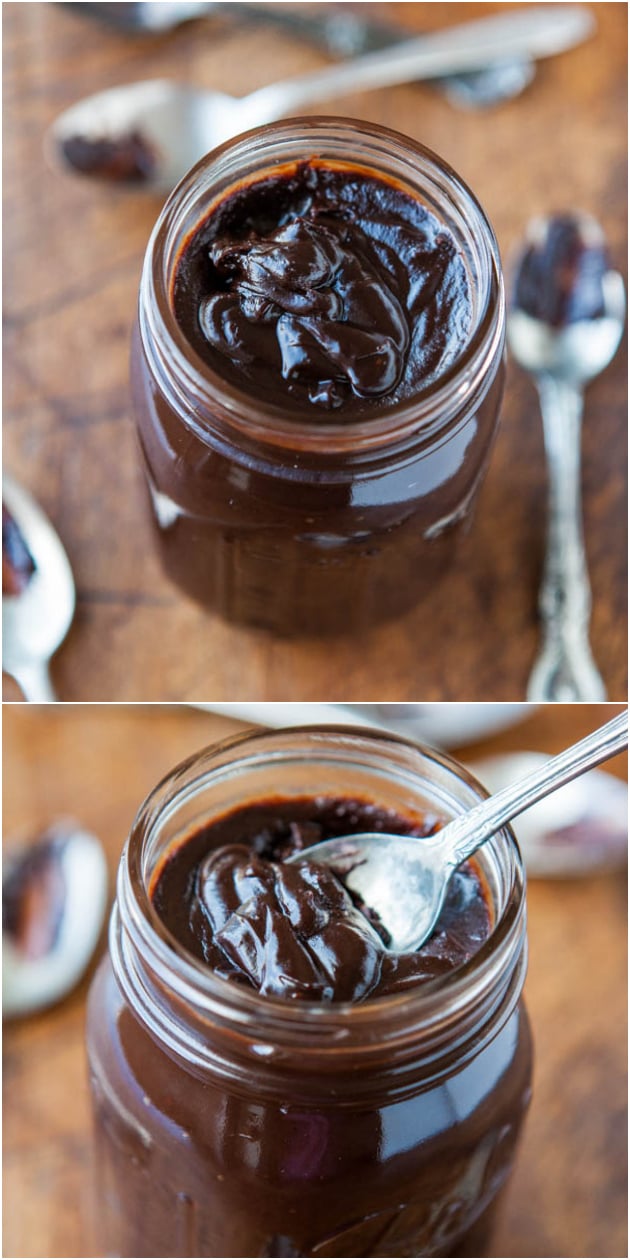 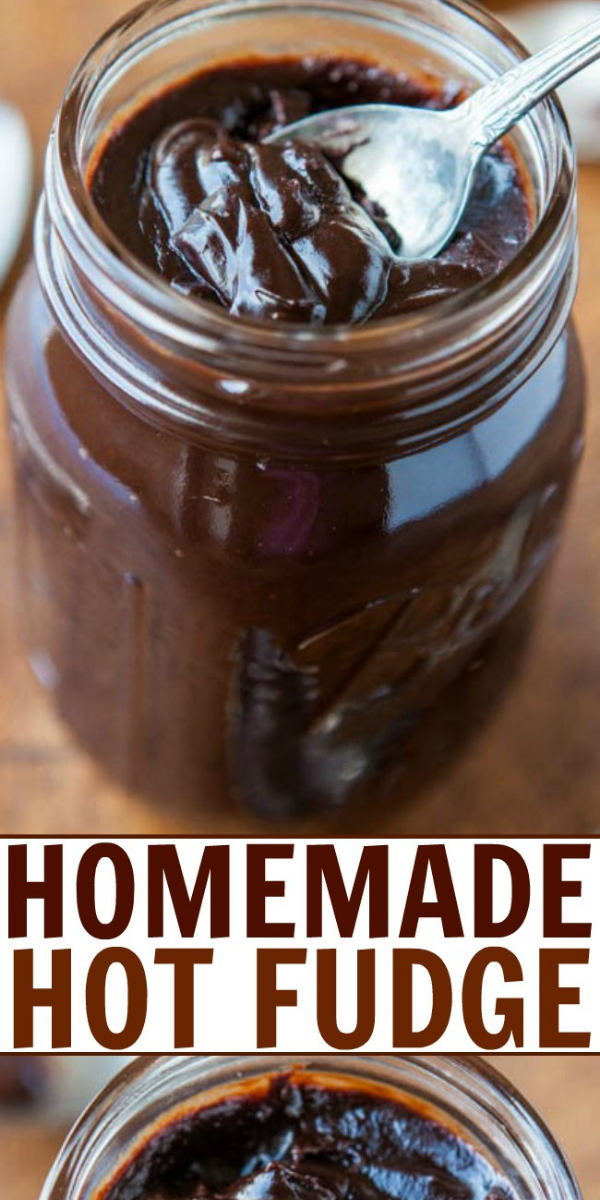 *Since the time I originally posted this recipe in 2013, I had a reader use honey rather than corn syrup because of a corn allergy, and she said the honey worked fine and the hot fudge set up perfectly. I haven't tested honey personally in this recipe, but if you're feeling experimentational you can give it a try.

Homemade Chocolate Peanut Butter – Even though peanut butter doesn’t need doctoring up, adding a bag of chocolate chips doesn’t hurt. Ready in 5 minutes and so easy! 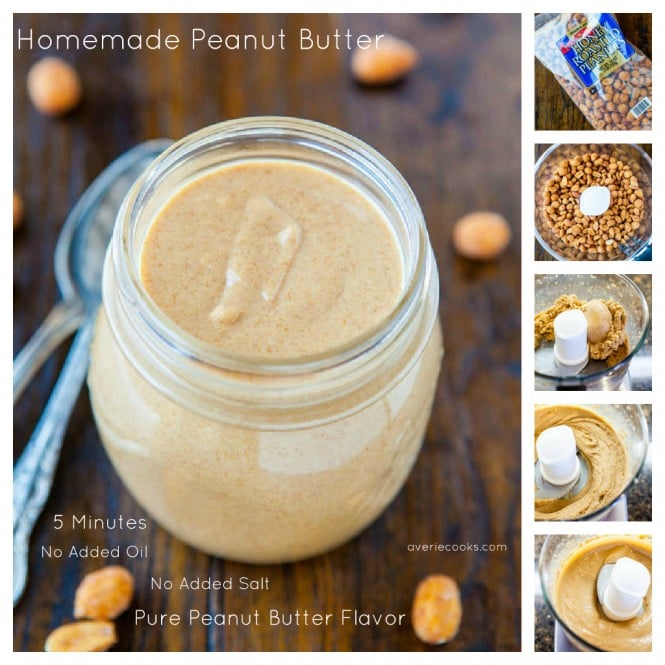 Homemade Cookie Butter — Fans of Biscoff or Trader Joe’s Speculoos Spread, now you can make this knockoff spread at home in minutes! 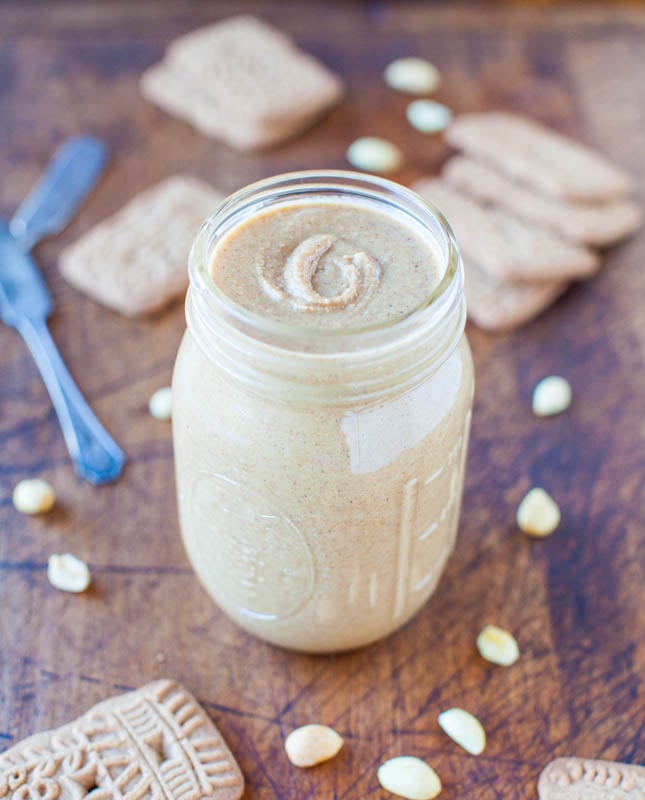 Dark Rum Caramel Sauce – An easy sauce to make with step-by-step photos, rum optional but it sure makes things more fun. Caramel sauce keeps for months in the refrigerator and makes nice gifts