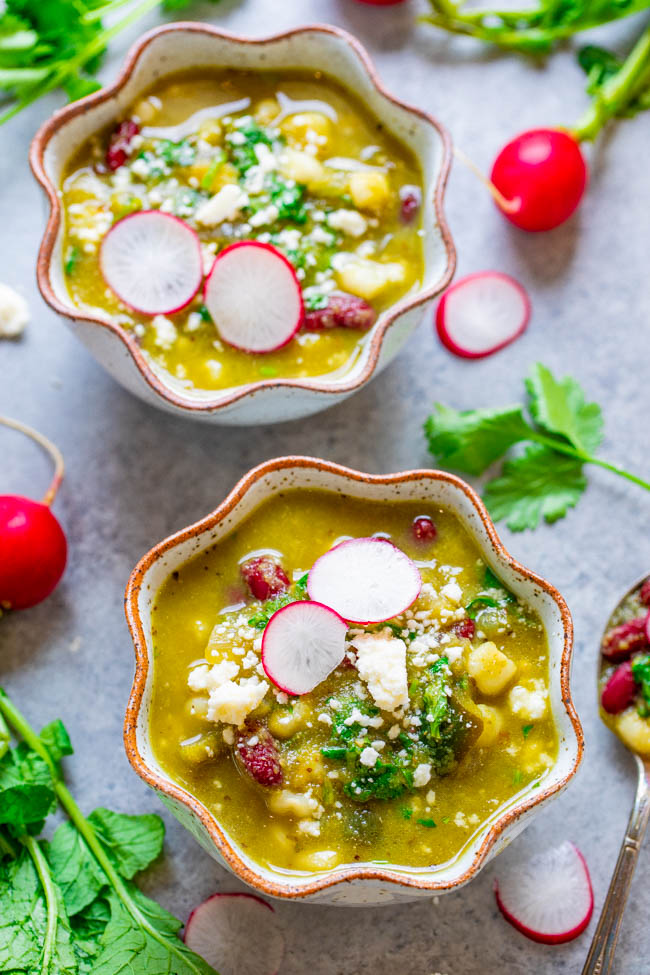 What’s In The Pozole Verde?

Let me start by saying I know it’s not typical to have a vegetarian or vegan pozole in Mexico but the great thing about the world we live in these days is that you can customize recipes so they suit your needs, thanks in large part to pulling elements of various recipes from the internet, and combining them to suit your tastes.

So although this pozole may not be traditional sans pork or beef, it’s full of lots of authentic pozole flavors, it’s super filling, satisfying, and hearty. 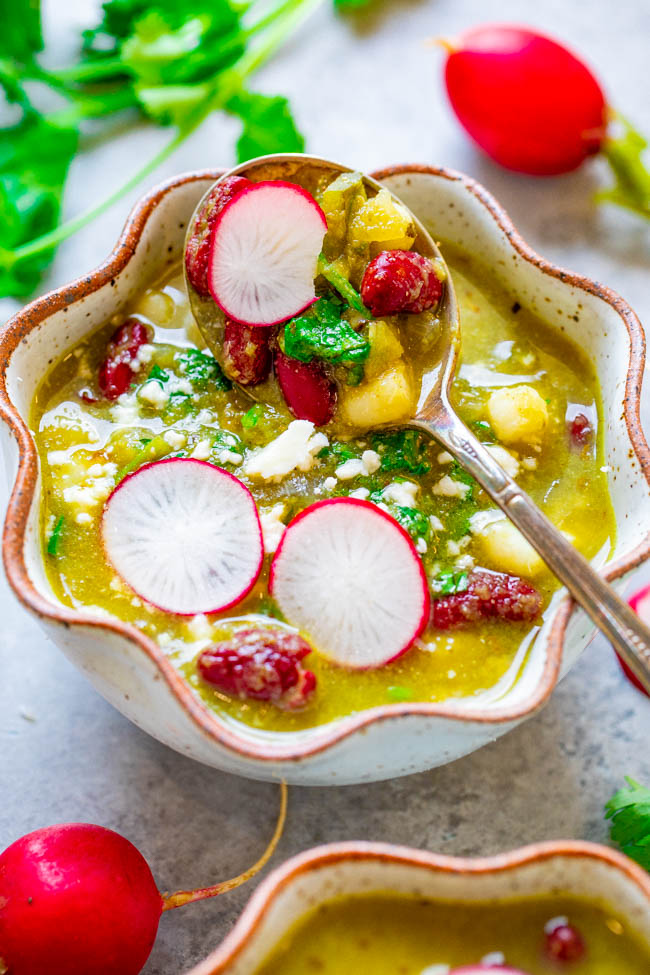 How To Make Pozole

Add the blended mixture to the sauteed mixture and then add kidney beans, hominy, and finish with cilantro, lime juice, salt and pepper to taste, and your favorite garnishes.

It’s really such a simple recipe that is bursting with so many vibrant green vegetables and herbs. 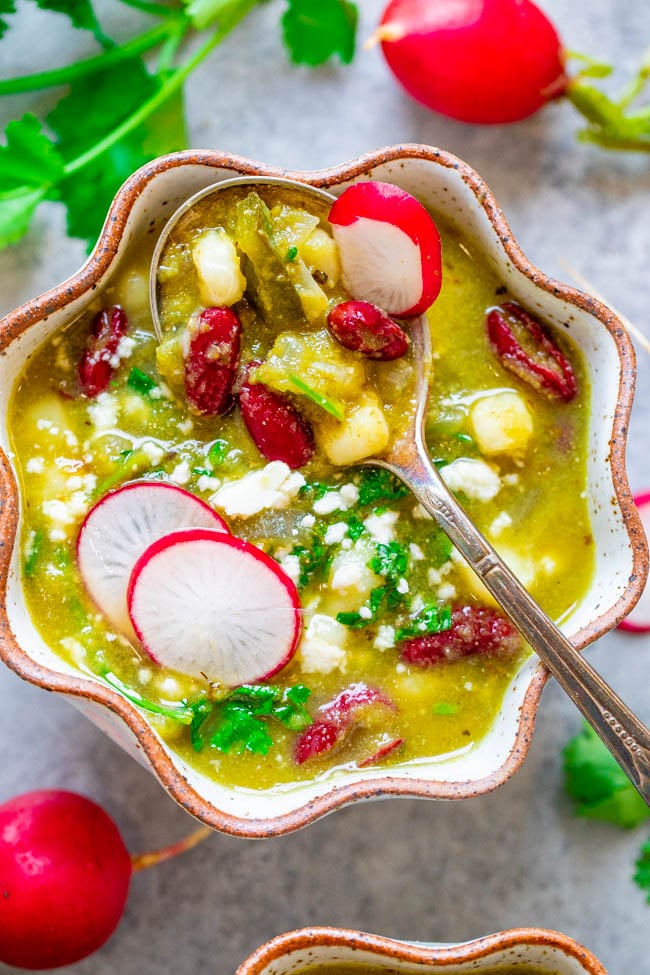 How Does The Pozole Taste?

When my daughter saw a blender canister full of raw tomatillos, poblanos, jalapeno, onion, and broth she was highly concerned about what I was making, but after she tasted the pozole she was pleasantly surprised by just how good it tasted.

It’s herbaceous, and even though it’s a cooked soup, it’s still tastes fresh and clean.

Despite a variety of peppers, it’s not spicy in the least because I removed the seeds from all the peppers. If you want it to read spicier, include the seeds, or just sprinkle in a few pinches of cayenne pepper.

The hominy adds wonderful chewiness. Hominy is corn but if you’ve never had hominy I would almost say that it tastes like corn meets gnocchi meets a potato. It’s really chewy thanks to a process called nixtamalization which you can read all about on Google. Suffice to say, it’s a must-have for pozole.

The kidney beans are perfect but other types of beans would work including pinto beans or even black beans. Again, we’re back to embracing non-traditionalism here.

I went heavy handed on the cumin as well as the coriander and Mexican oregano. You can always start with less and add more if you’re concerned about adding too much at once. However, you need to flavor lots of green plants here and the best way to do that is with plenty of spices. And salt.

It’s important to salt soup adequately so it doesn’t taste bland. If it tastes bland in the least, add a pinch more salt and keep adding until it has the right flavor balance.

I used 16 ounces of vegetable broth but if you want more broth or like brothier soups, add additional broth to taste.

I used radishes and cotija cheese which isn’t vegan, but I am pointing it out again so that the vegan police don’t come commenting harshly. Use vegan cheese or omit it if the vegan aspect is important to you.

If you’re ever in need a quick and easy homemade salsa verde, the blender portion of the tomatillos, poblanos, jalapenos, onion, and vegetable broth is exactly what I’d recommend and it’s perfect.

Just mentioning this as a tip because in the future I may likely reference back to this post about how to make salsa verde and now it’s here.

20-Minute Cilantro Chicken with Rice and Beans – EASY, healthy, and the fresh cilantro sauce is SO good!! The chicken is juicy, loaded with flavor, and along with the rice and beans and you’ll be SATISFIED for hours!! 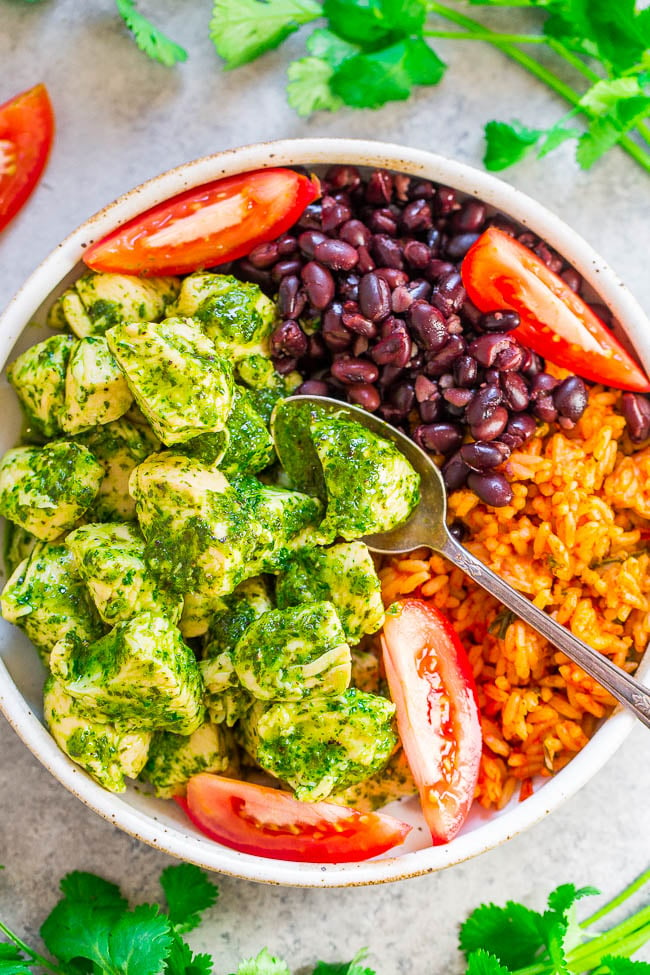 Avocado, Black Bean and Corn Salad with Lime-Cumin Vinaigrette – Everything tastes better with avocado! Easy, healthy and tons of flavor! 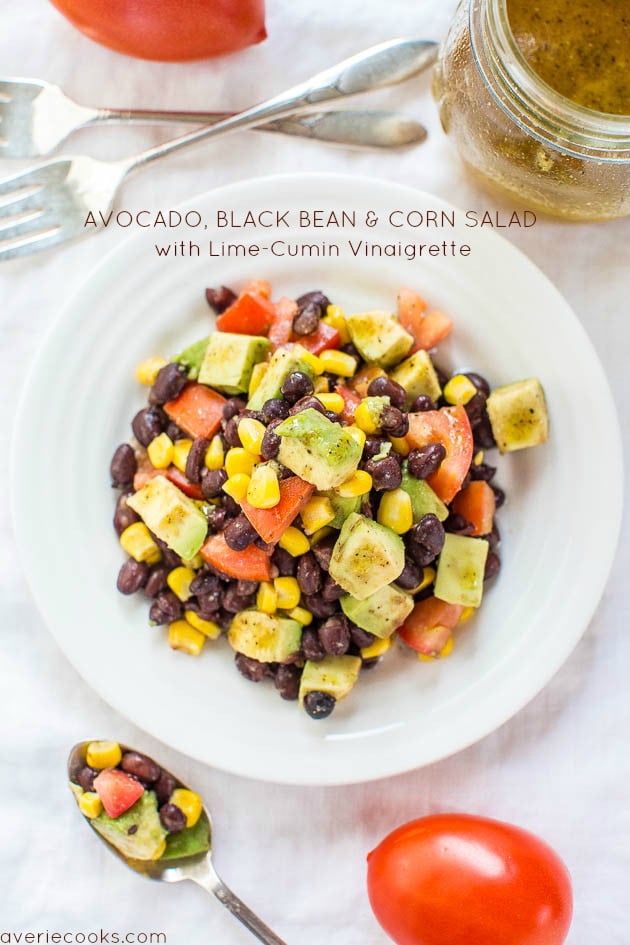 Loaded Chicken Enchilada Zucchini Boats – Skip enchilada wraps and use zucchini instead! Easy, healthier and there’s so much flavor between juicy chicken drenched in enchilada sauce, corn, peppers, and cheese! 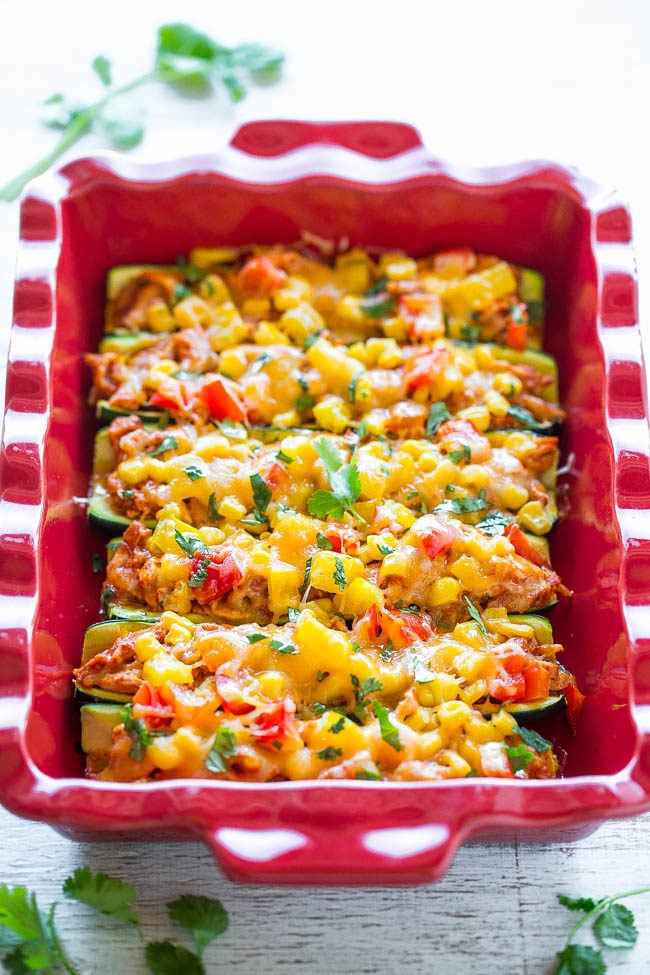