Banana Bread Pudding — Bread pudding meets banana bread in this EASY breakfast or brunch recipe that everyone will LOVE!! Firmer exterior with a custardy interior and an amazing vanilla sauce that is to-die-for!! 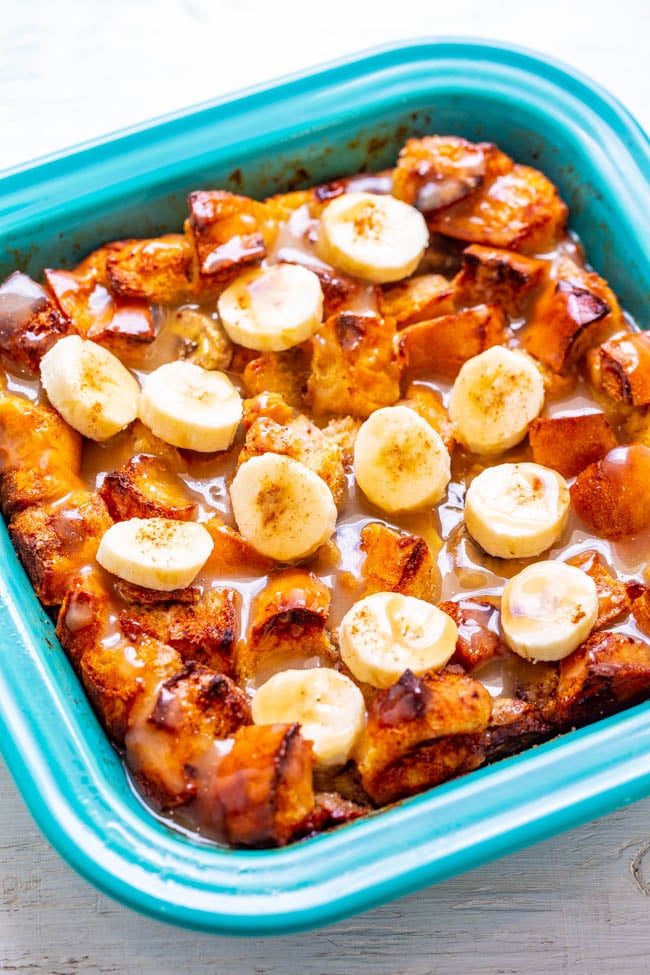 I cannot think of a more heavenly combination. Bread pudding meets banana bread. I am not the biggest fan of just plain bananas, but turn them into banana bread anything, and I am so down.

For anyone that reads my site regularly, you’ll remember that I have 40+ banana bread recipes. And I am happily adding this gem to the growing list of recipes.

The top of this homemade bread pudding is lightly crusty and golden while the interior is custard-like with plenty of bananas in every bite. I also added raisins, but if you’re not a raisin fan (people seem to have a love-hate relationship with raisins – of all things), simply omit them. I love biting into those chewy little nuggets for extra texture and flavor.

I used 2 full teaspoons of cinnamon to add some pep and lots of flavor to the bread pudding. I opted against nutmeg, but go for it if you’re feeling it.

There’s an amazing vanilla sauce that’s poured over the bread pudding after baking and before serving it. Do not skip the extra five minutes it takes to make the sauce. It takes the banana bread pudding from good to ohmygod I cannot stop eating this stuff. 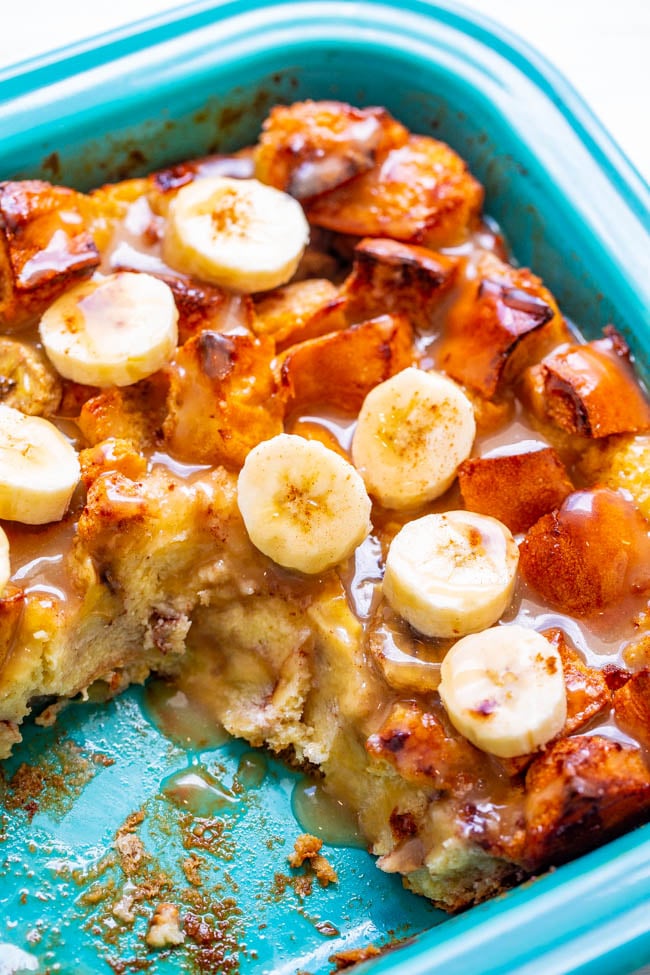 How to Make Banana Bread Pudding

Add the bread cubes to a casserole dish, then toss with melted butter. In a separate bowl, whisk together the egg, milk, sugar, vanilla, cinnamon, and salt. Gently stir in the bananas and raisins.

Pour the egg mixture over the bread cubes and toss to coat. Bake until the top is lightly golden brown and there’s no liquid pooling in the center.

During the last 10 minutes of baking, make the vanilla sauce. Pour the sauce over the warm bread pudding and serve immediately. 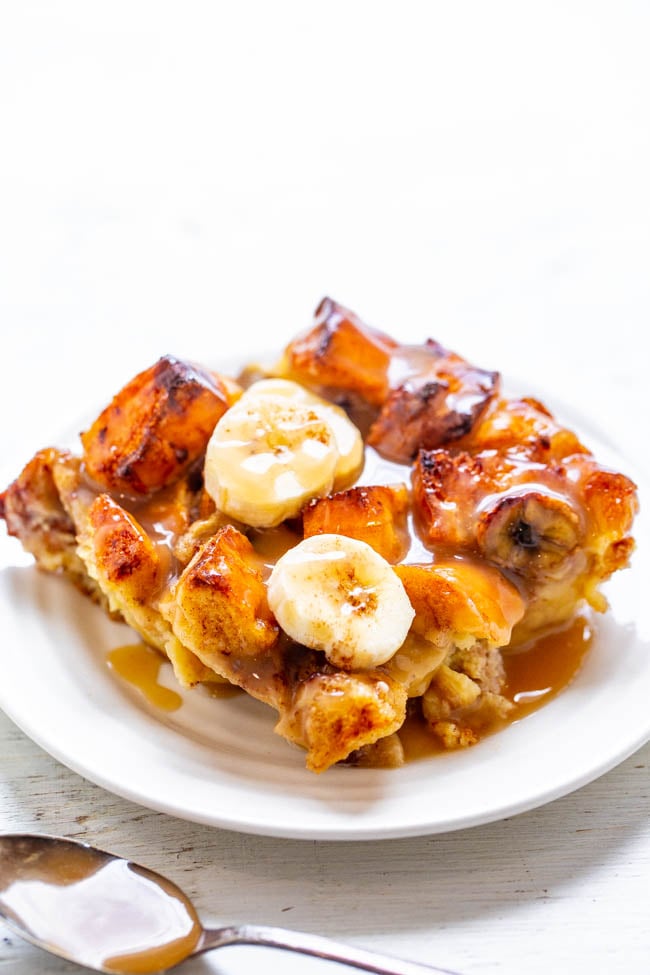 Use day-old or two-day-old French bread. Perfectly fresh bread will turn too mushy after it’s coated in eggs and milk. This is one of those rare times where you want dry bread. Another time is making Thanksgiving stuffing.

A tip to encourage the bread to dry out faster is to slice it into 1-inch cubes and place them on a baking sheet overnight, exposed to air, for 12 hours or so.

If you’re more of a pro in the kitchen and are comfortable drying it out in a low, 200F oven, flipping and turning the cubes every 15 minutes or so until it’s dry, but not toasted, go for it. My worry is that people will actually toast the bread rather than just drying it out so use this method with caution. Leaving it out, exposed to air for 12 hours is much simpler and much more foolproof.

This is not the time to use your super beat up, spotty bananas. Save them for banana bread because they will fall apart during baking. If that’s what you want to occur, fine. But if you want intact slices of bananas like I was going for, make sure your bananas are on the firmer side. Not green or anything but not too tired and brown.

I have not assembled this the night before and then baked it off the next morning as a make-ahead (brunch) recipe. I don’t know if the bread would become too soggy or not. If you try it, let me know.

Be careful not to over bake the banana bread pudding if you want that slighty gooey, custardy interior because the contrast of the firmer exterior with the soft and tender interior is wonderful.

ALL OF MY BANANA BREAD RECIPES! 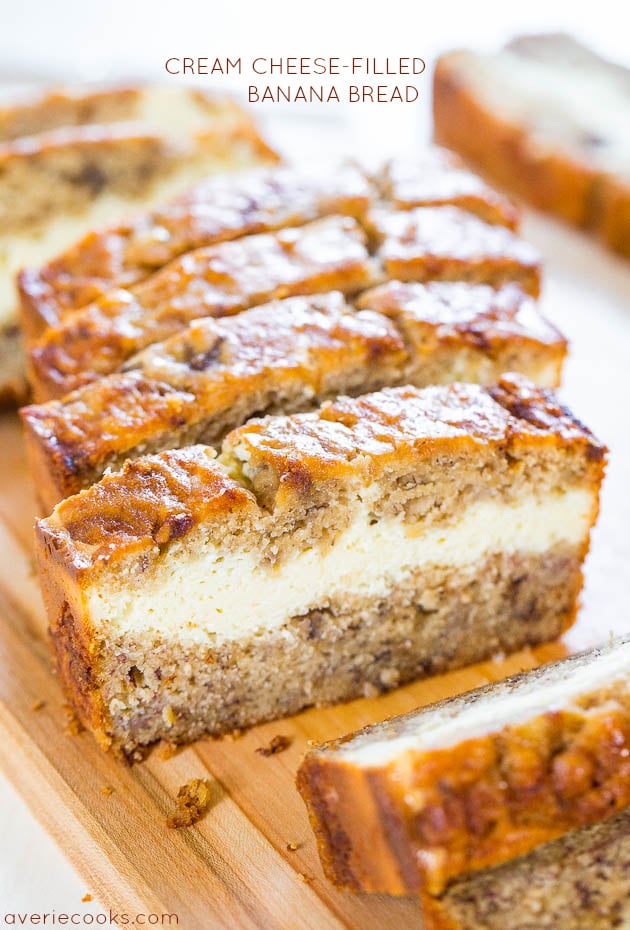 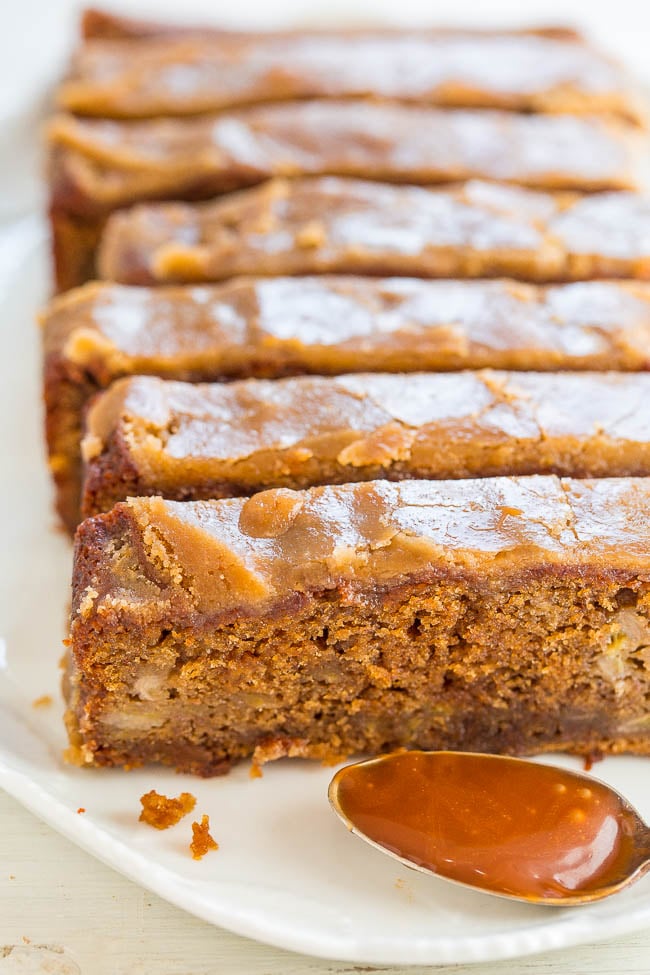 Six-Banana Banana Bread – Yes, 6 bananas in 1 loaf means it’s super soft, moist, and robust banana flavor! Now you know what to do with all your ripe bananas! 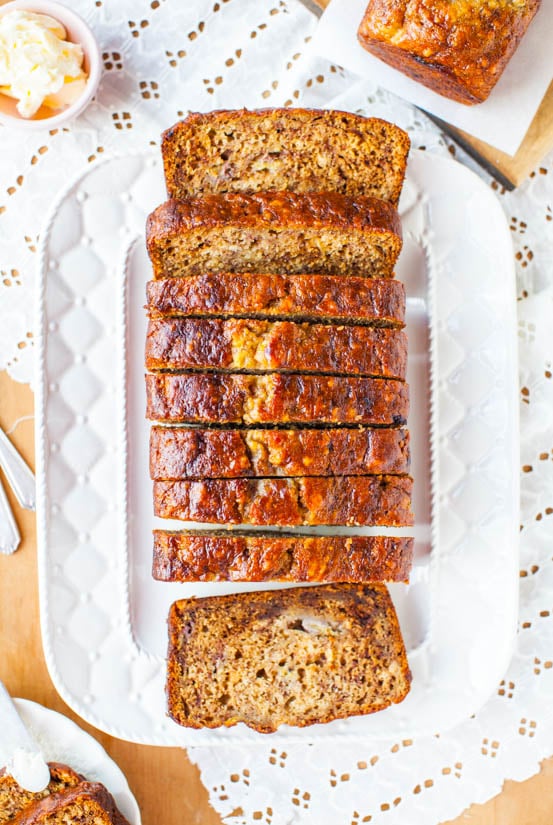 Flour’s Famous Banana Bread – Made with Flour Bakery’s famous recipe to see if it lives up to the hype. Verdict? Totally fabulous! Make it! 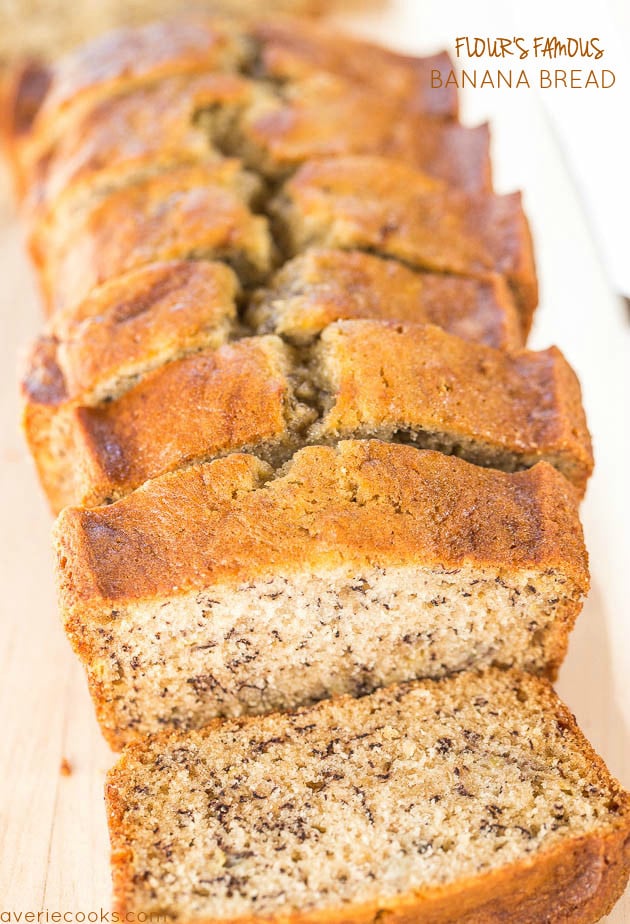 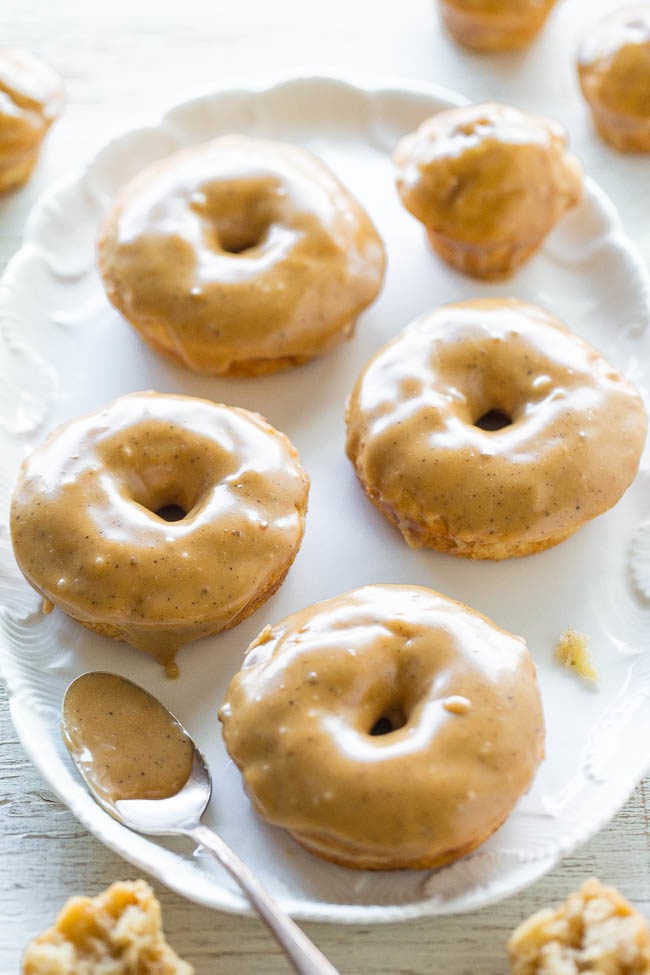 Slow Cooker Banana Bread Cake with Brown Sugar Sauce – Soft, tender banana bread with a caramely, brown sugar sauce that develops while the bread cooks! If you’ve never made dessert in your slow cooker, start with this easy recipe! 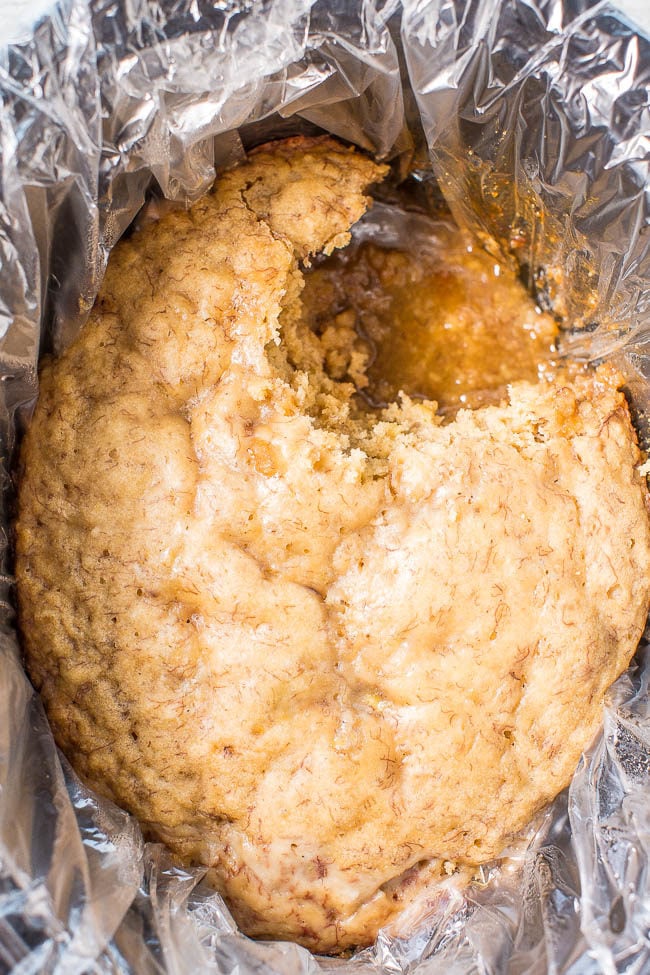 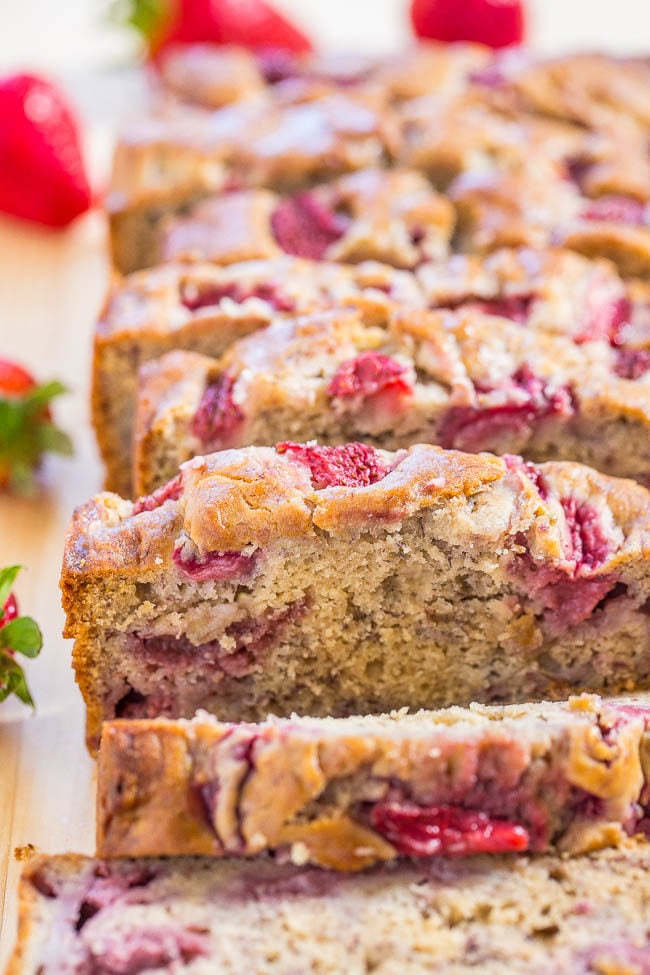