Chicken Chorizo Pasta — Tender pasta shells are mixed with chorizo and seasoned shredded chicken in a cream cheese and tomato based sauce for a truly FLAVORFUL comfort food dinner recipe! Ready in 45 minutes, EASY, and with just the right amount of heat to have everyone asking for seconds! 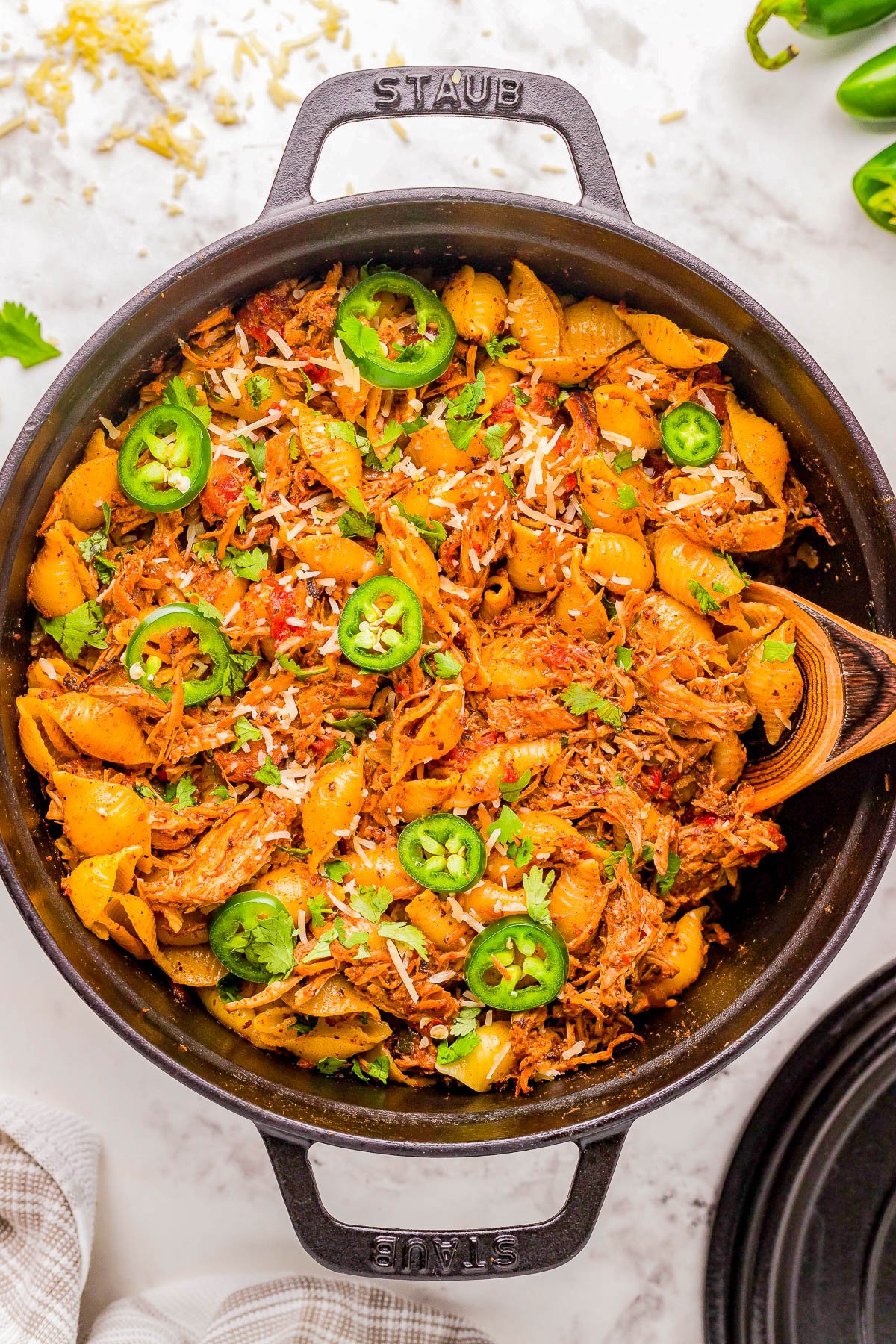 Craving a pasta dinner that is equal parts filling and flavorful? You’ve found it!

This chicken chorizo pasta recipe has cumin and smoked paprika-seasoned shredded chicken and pork chorizo so right off the bat you’re in double protein territory.

Then, there’s tender pasta shells with a sauce made from heavy cream, cream cheese, and diced tomatoes. 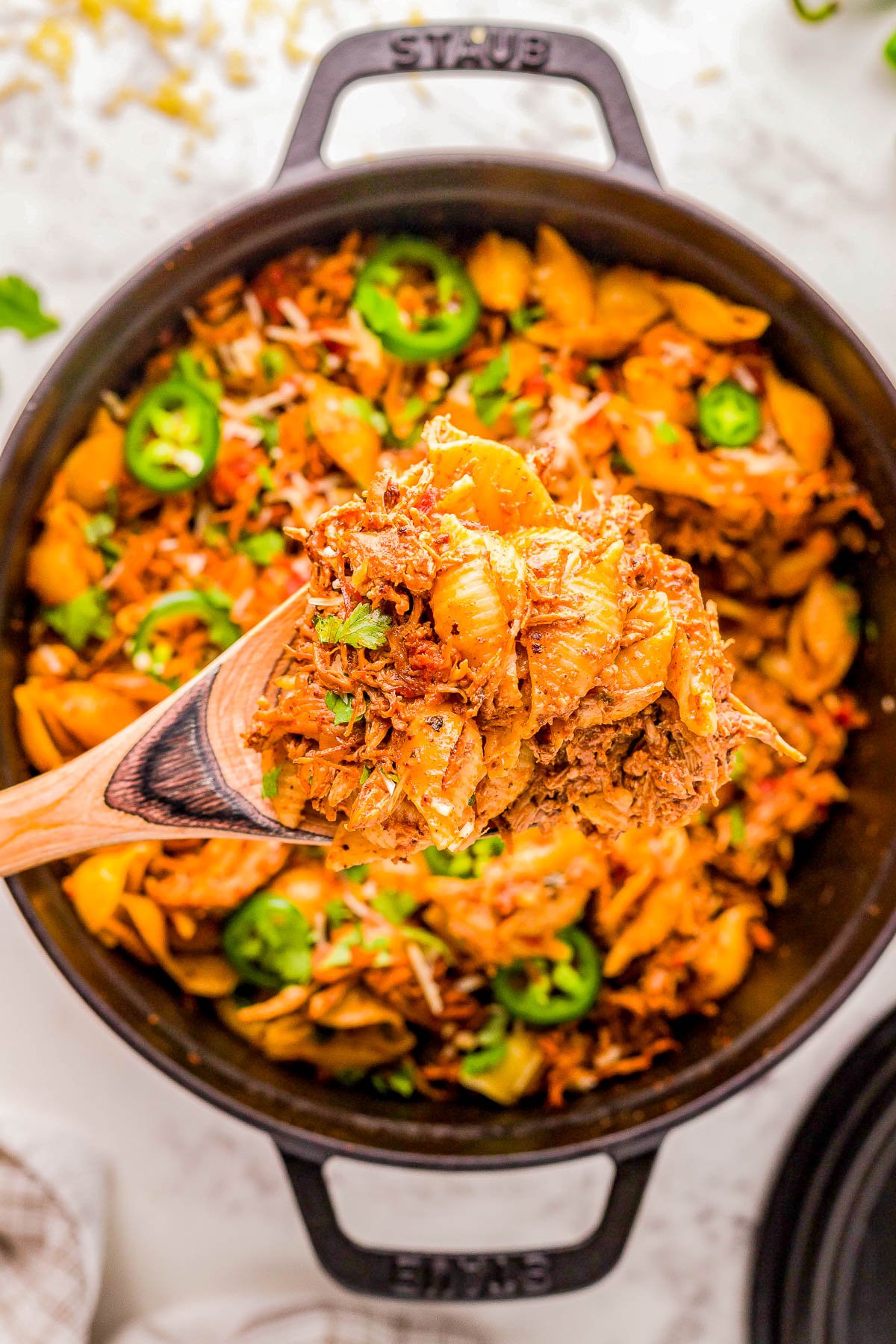 I told you this is a very flavorful dish – but it’s not too spicy so don’t worry! There’s just the right amount of heat and the creamy sauce plus fresh cilantro tones the heat down.

Aside from boiling the noodles, the rest of the recipe is all made in one pot, in 45 minutes, and it’s easy!

It’s perfect wintertime comfort food in our house when I want to jazz up our usual weeknight chicken dinners.

I am all about an easy weeknight dinner recipe that makes a hefty amount so that I have planned leftovers for the next day or two. 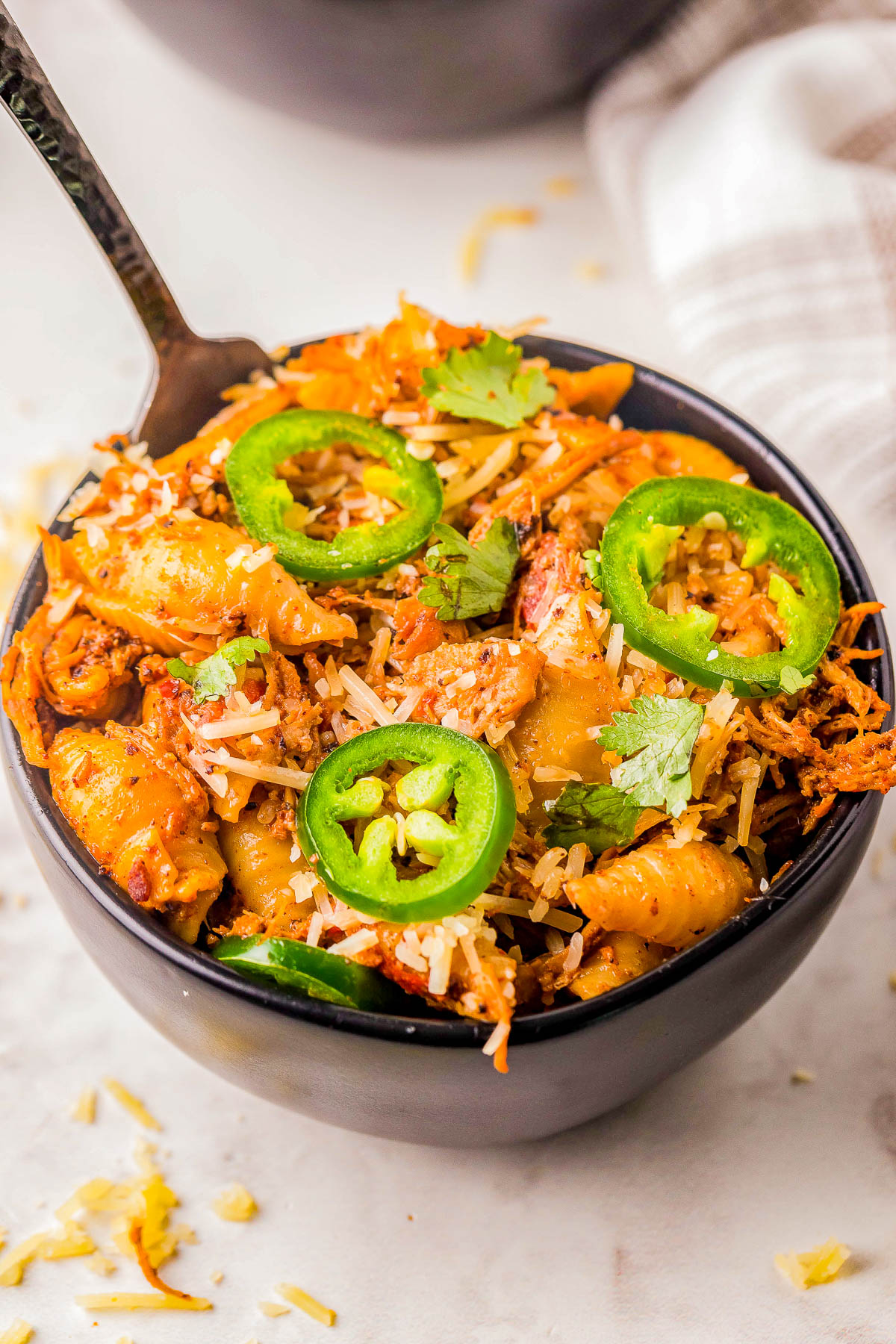 Note: Scroll down to the recipe card section of the post for the ingredients with amounts included and for more complete directions. 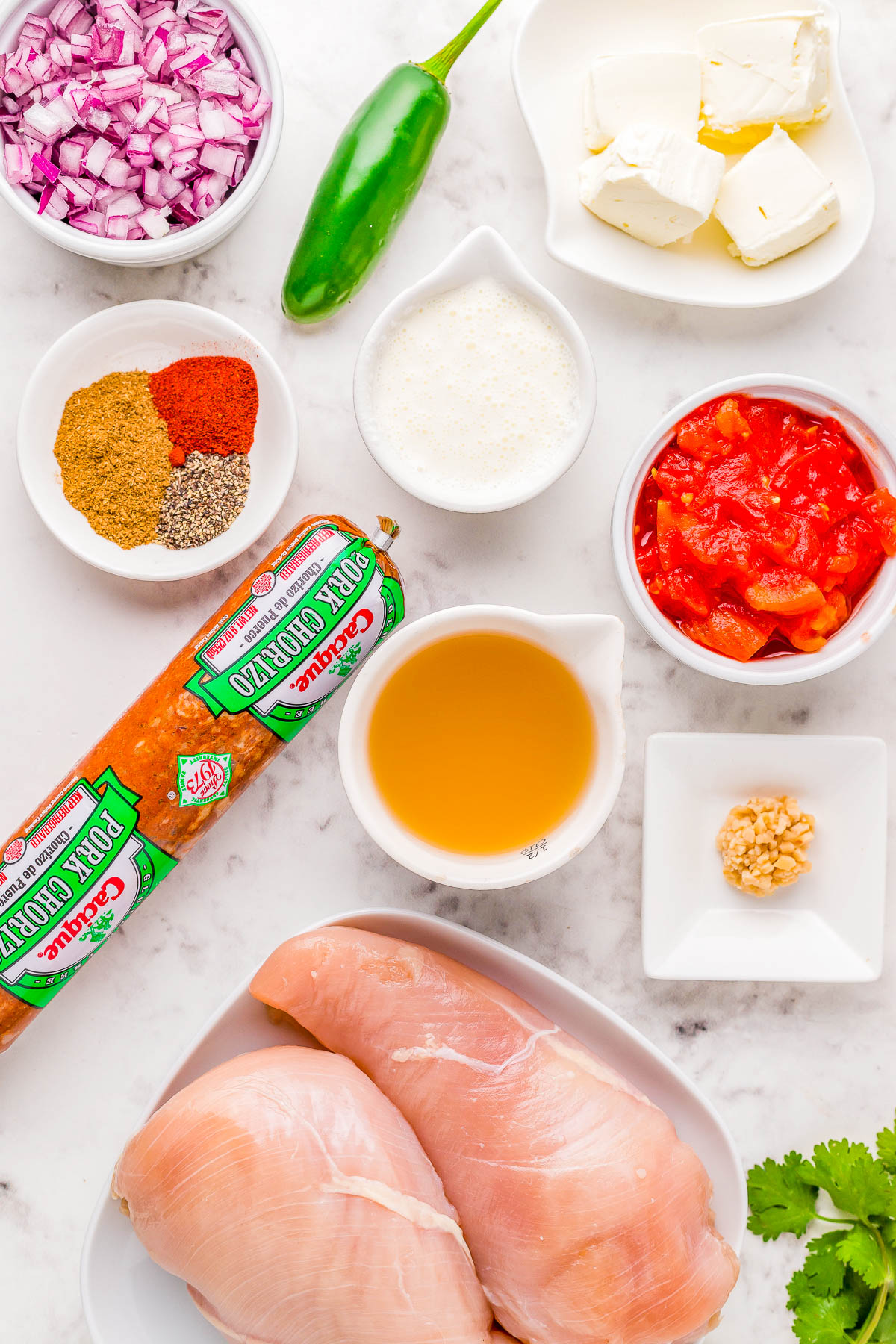 How to Make Chicken and Chorizo Pasta

Step 1: Cook the pasta according to package instructions. Drain and set aside. While pasta boils, keep moving along in the recipe.

Step 2: Combine the cumin, paprika, pepper and use that mixture to season the chicken breasts on both sides. 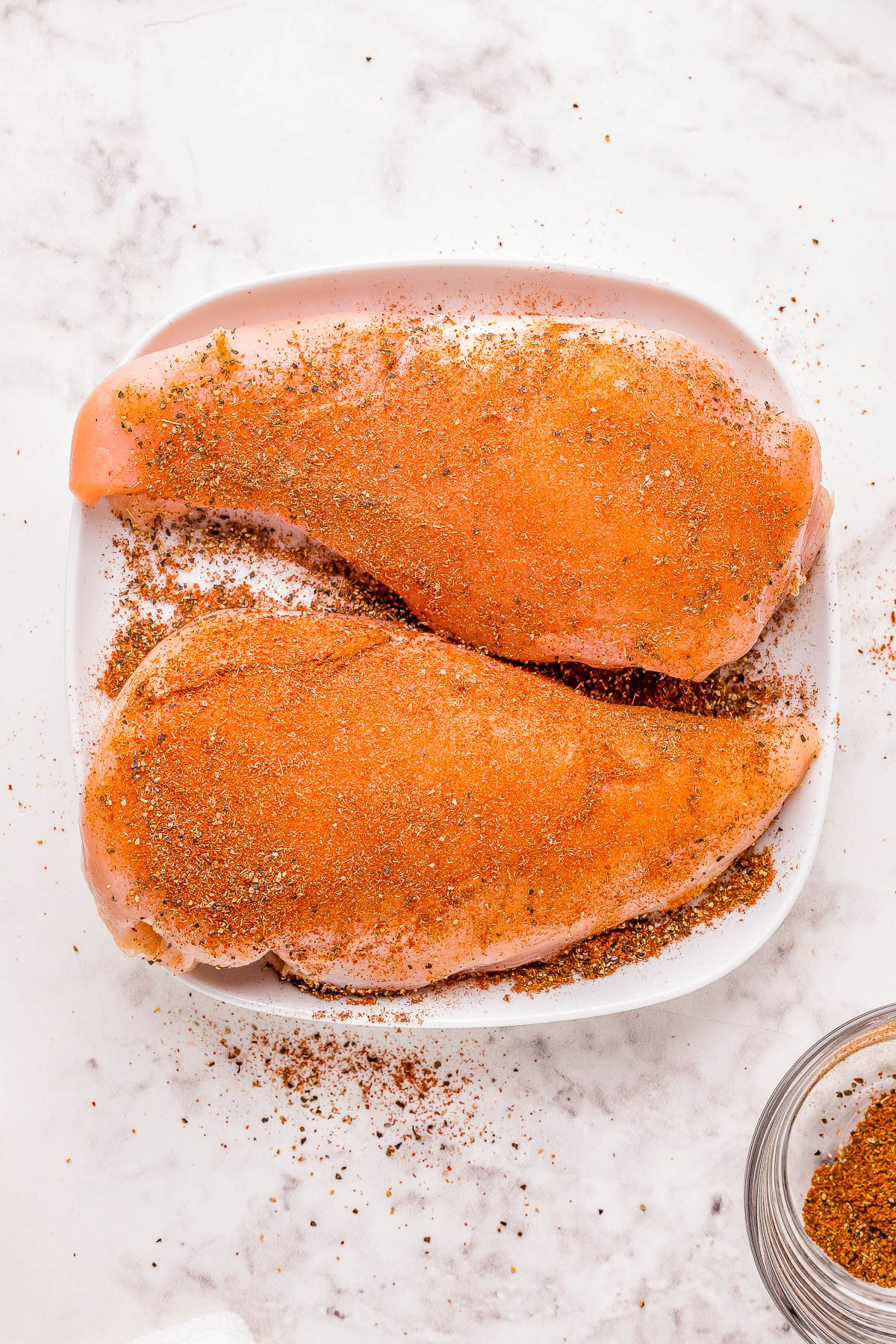 Step 3: Heat the olive oil in your Dutch oven and cook the chorizo. Break it apart with a wooden spoon as you go.

Step 4: Push the chorizo to the sides of the pot, making a well in the center, add the chicken breasts, and sear on each side for about 3 minutes per side. 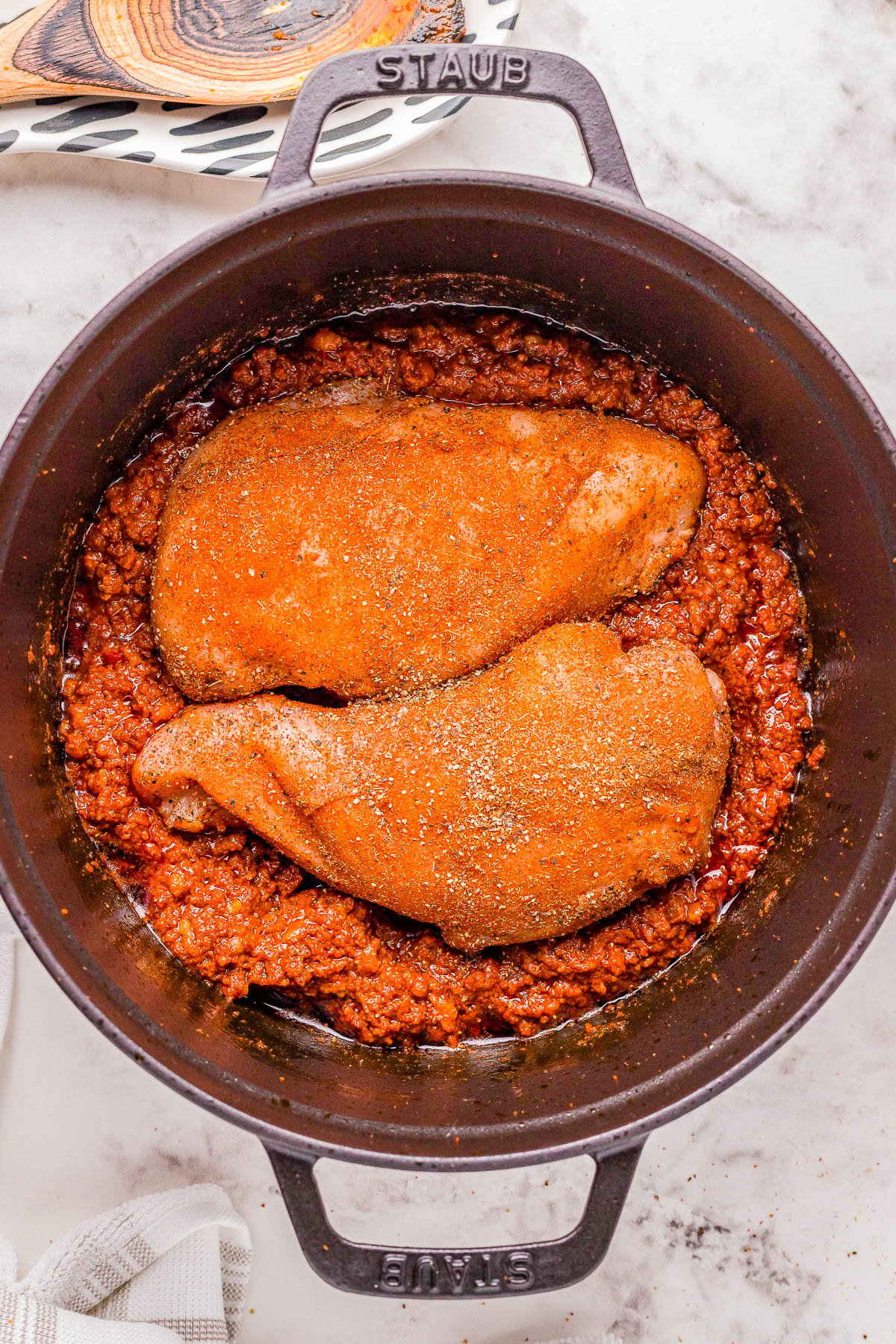 Step 5: Add the chicken broth, onions, jalapeños, and garlic to the Dutch oven. 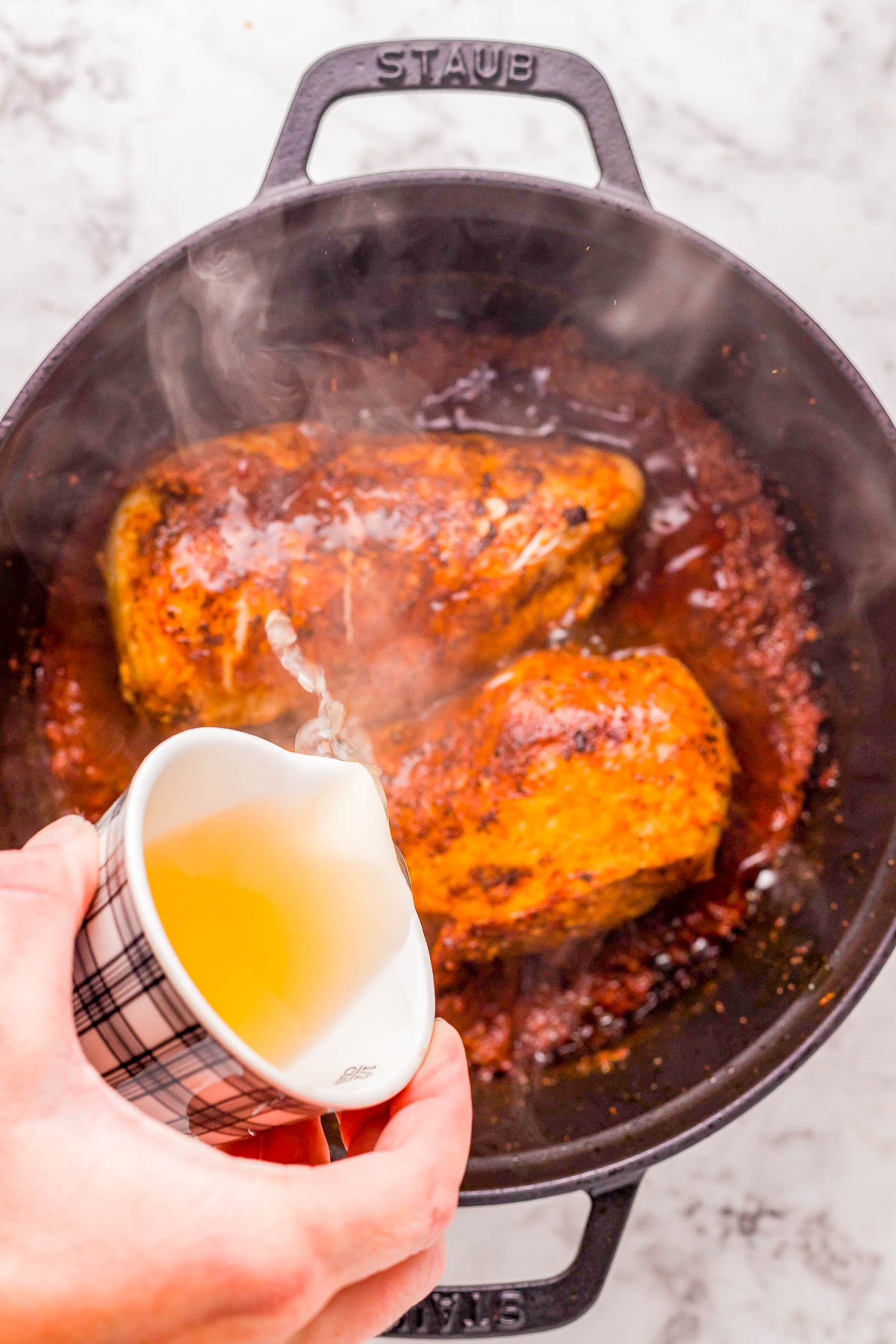 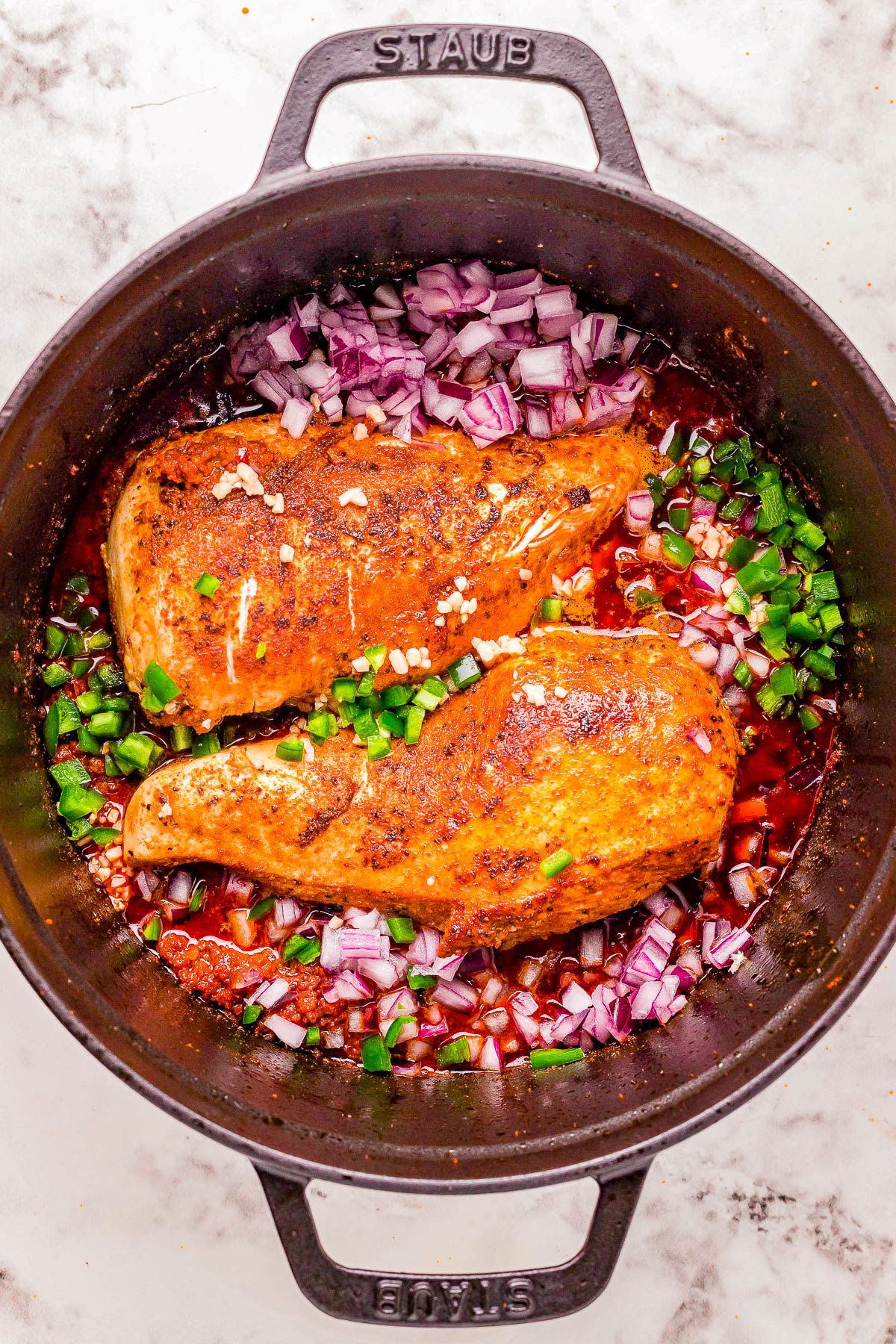 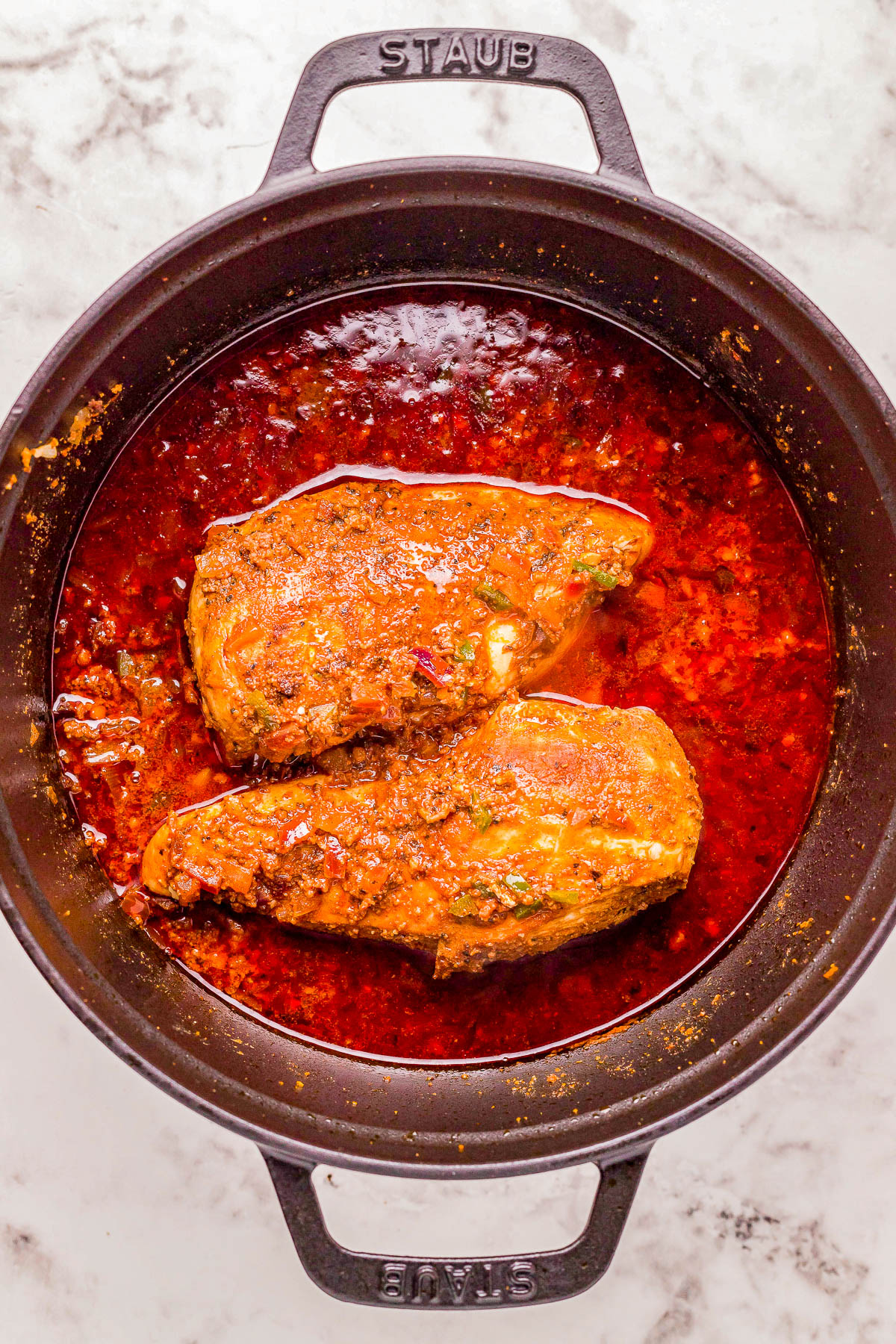 Step 7: Remove the chicken from the pot and place it in a separate bowl and shred it. 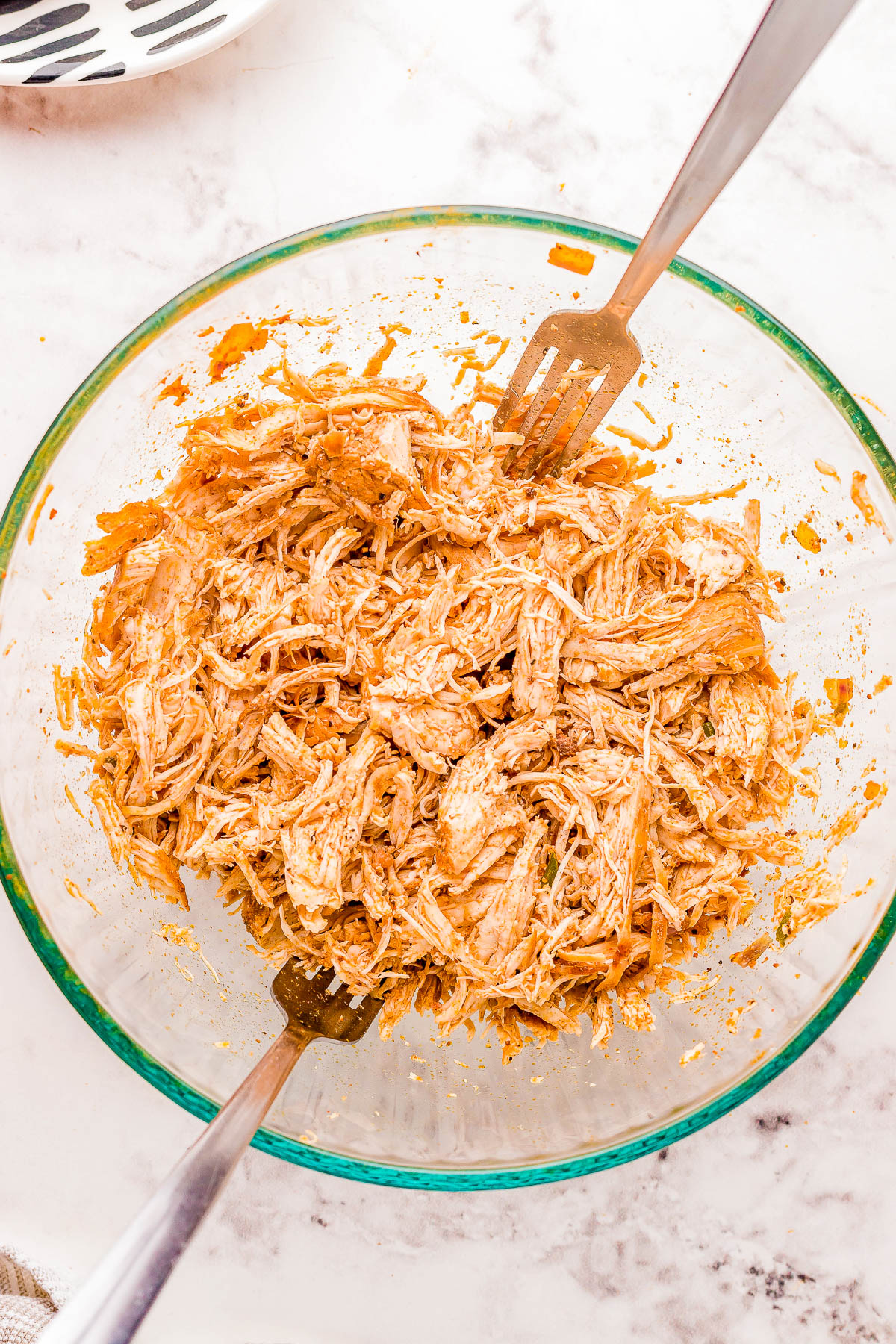 Tip: Allow it to rest for about 5 minutes before shredding it so the natural juices don’t run out.

Step 8: To the Dutch oven, add cubed cream cheese and heavy cream and stir until smooth and combined. 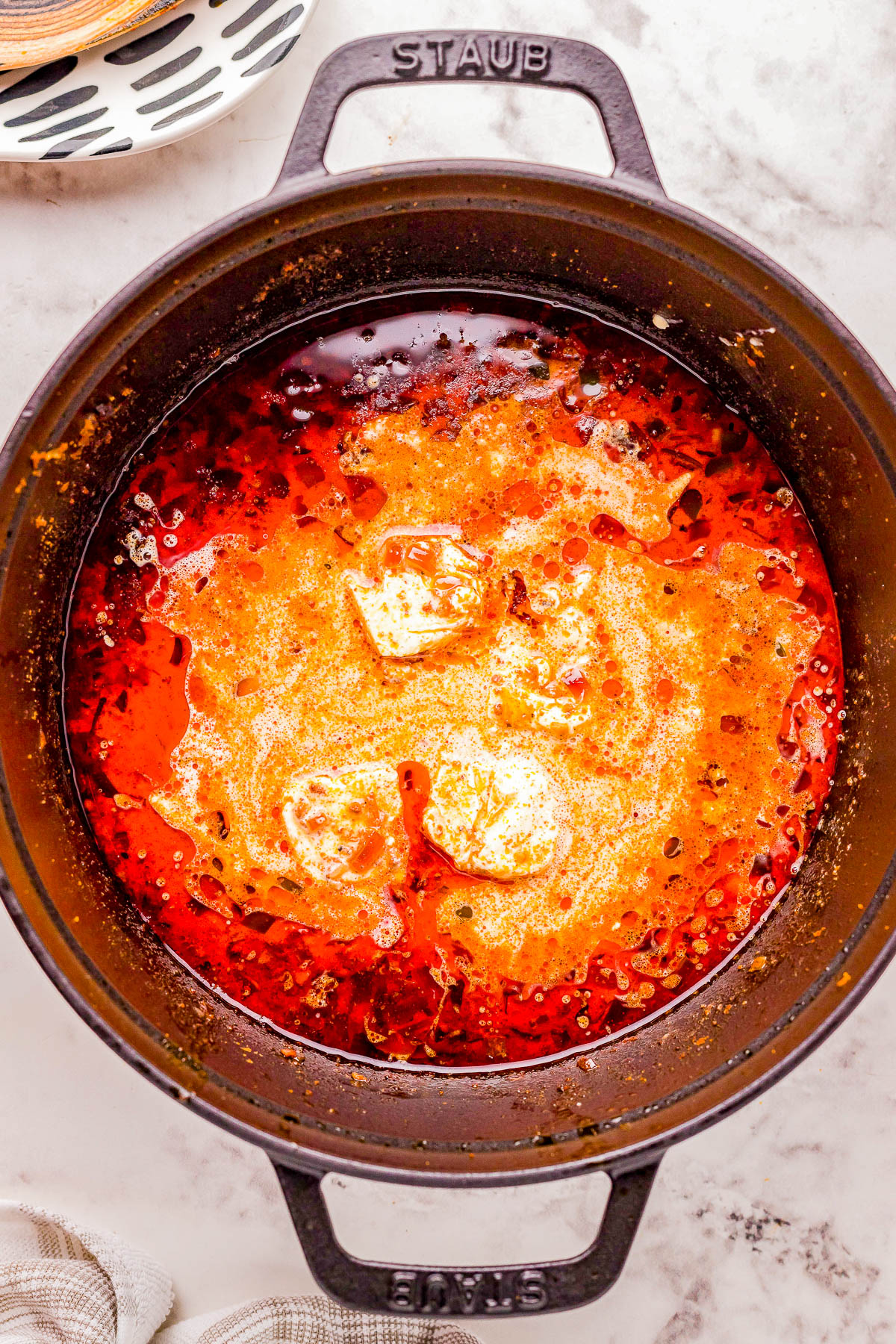 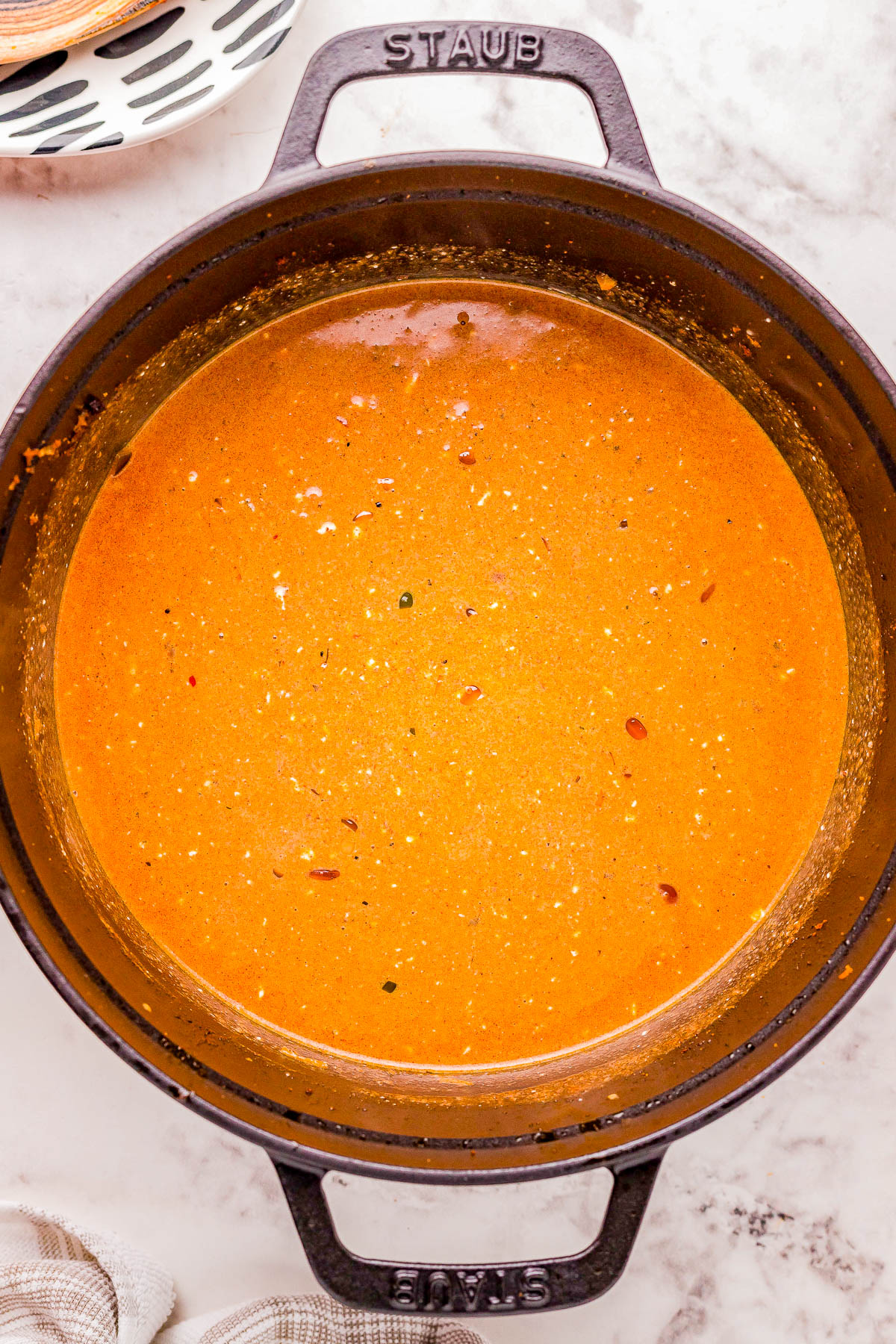 Step 9: Return the shredded chicken back to the Dutch oven with the creamy sauce. 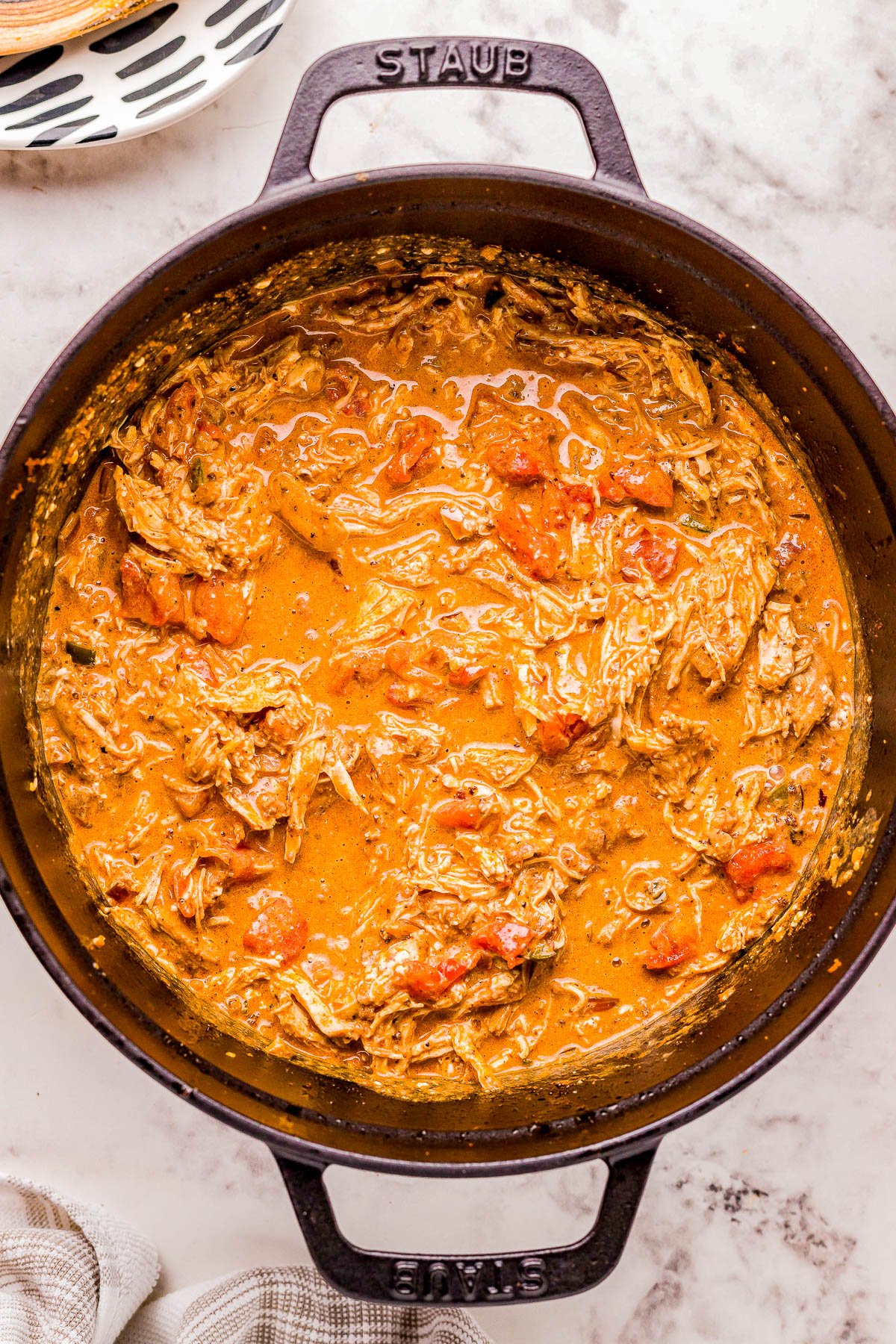 Step 10: Stir in the diced tomatoes, add the pasta, and heat until warmed through.

Step 11: Garnish with fresh cilantro and jalapeño slices to taste before serving! 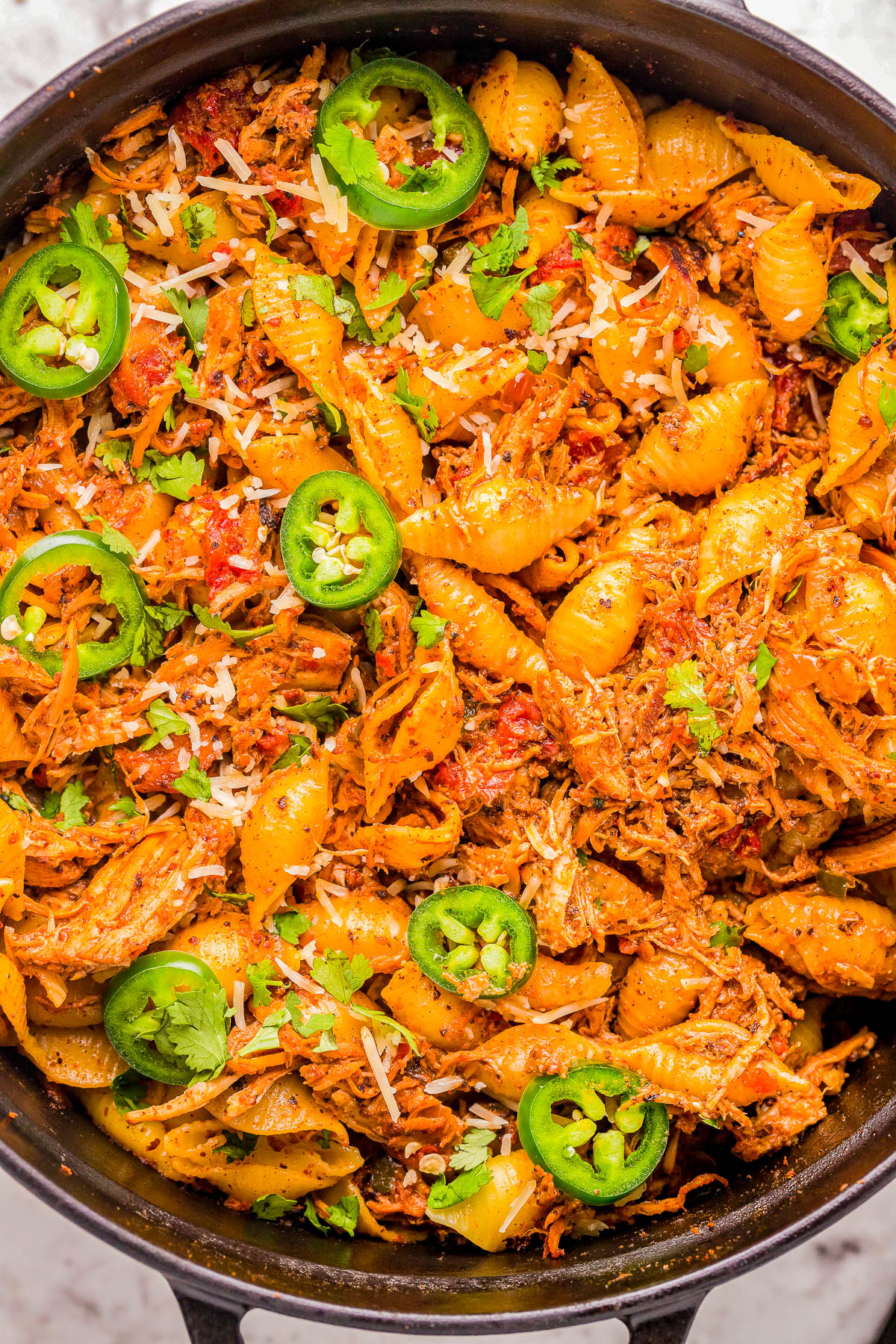 What Kind of Chicken and Chorizo Should I Use?

For this easy chicken chorizo pasta recipe, I recommend the following: 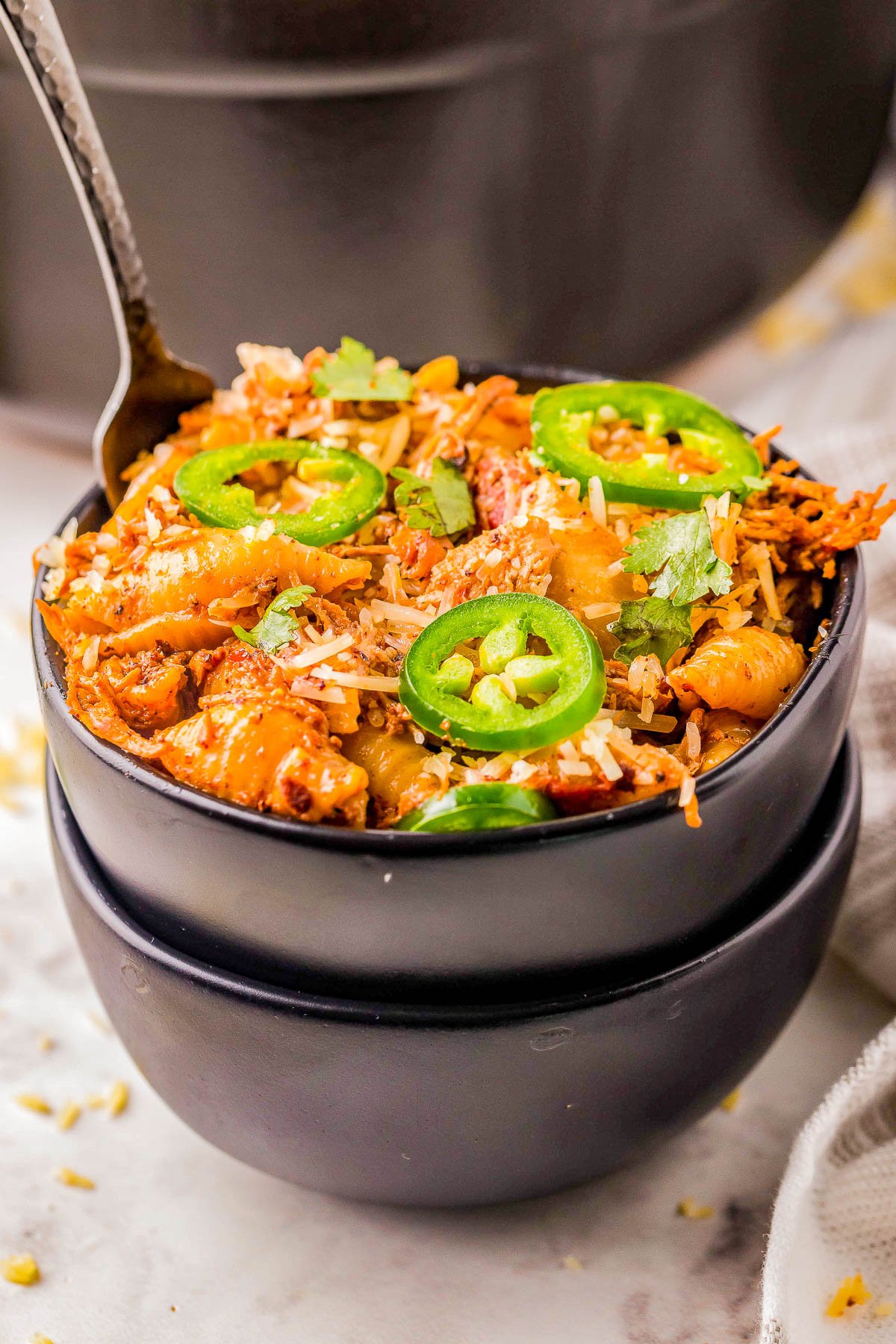 Is Chicken and Chorizo Pasta Spicy?

Inherent in most chorizo, there’s some heat. However, it’s manageable and welcomed in my family.

The cream cheese and heavy cream not only add creaminess and flavor, but they also tame the heat in this chorizo chicken pasta dish.

You can play around with adding less jalapeno pepper to the sauce, or none at all, if you are trying to make the dish less spicy.

Contrary to popular belief, there’s not a ton of heat in jalapeños, especially if you remove the seeds and white membranes.

On the other hand, serrano chiles, which are also green but thinner or skinnier than the average jalapeno which tend to be shorter and plumper, they do pack some heat.

Tip: Don’t confuse jalapenos peppers with serranos. Both are green. The former is not very spicy whereas the later definitely is! Jalapenos are “plumper” looking whereas serranos are more thinner. To avoid your chicken chorizo pasta dish from getting overly spicy, make sure you select jalapenos unless you want it hot – then go with a serrano chile! 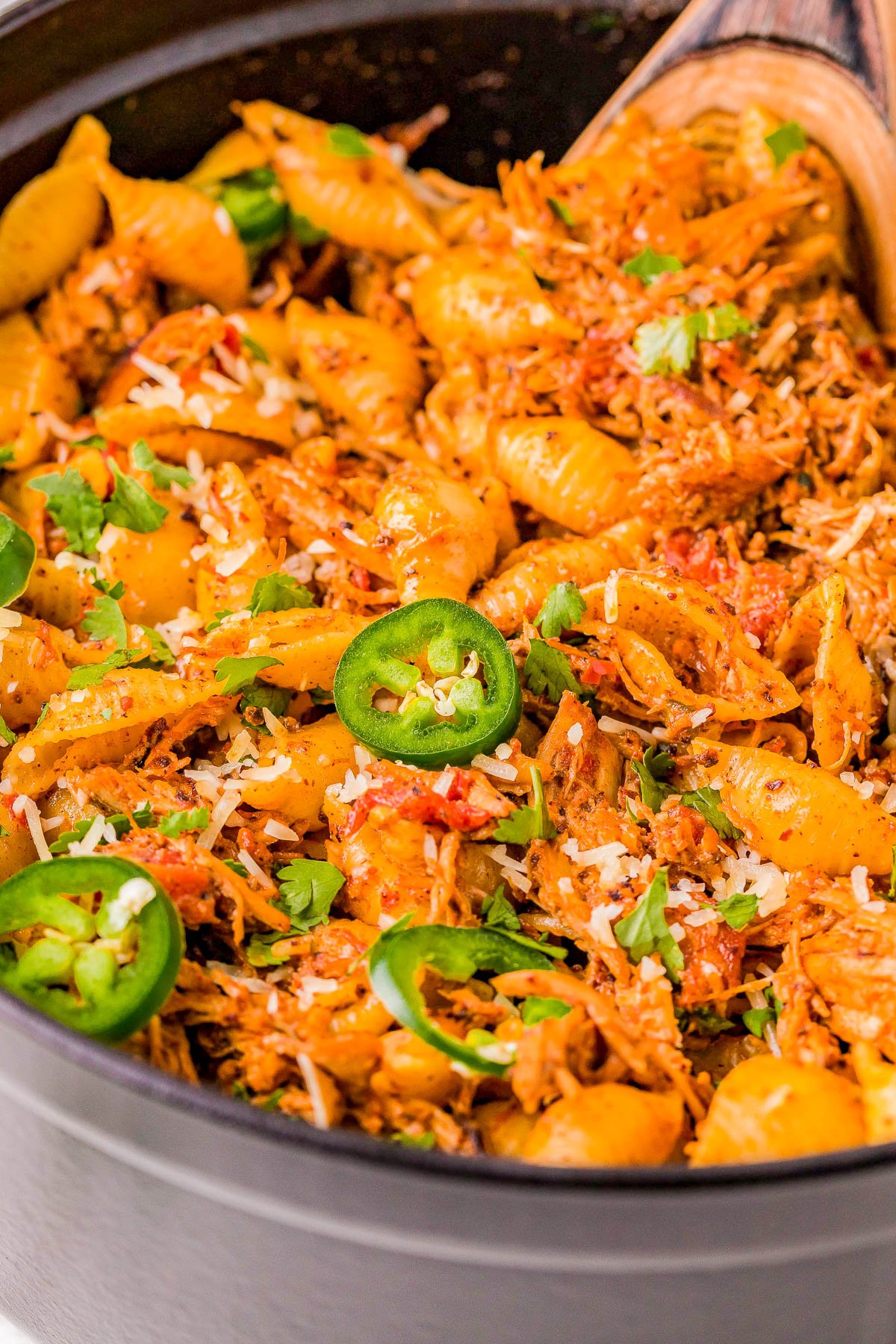 This creamy pasta with chorizo is hearty, filling, and you really don’t need anything else with it! No one is going to be walking away hungry after a big bowl or plate of this.

However, you can always serve it with Roasted Broccoli, Roasted Brussels Sprouts, or a BLT Salad.

The chicken chorizo pasta will keep airtight in the fridge for up to 5 days or in the freezer for up to 4 months. 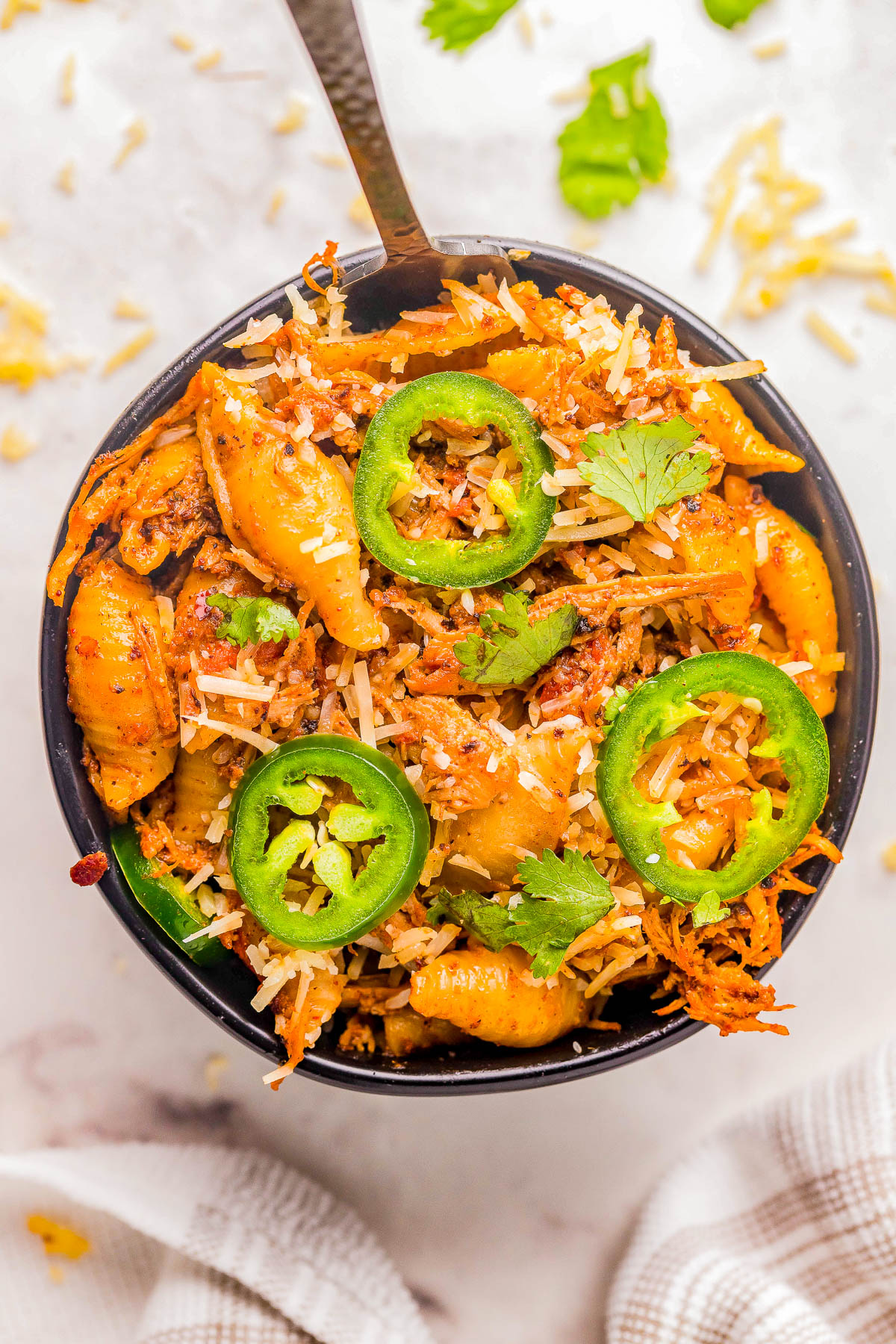 Pasta – I used medium shells for my chorizo chicken and pasta. However you can use another small-shaped pasta such as: 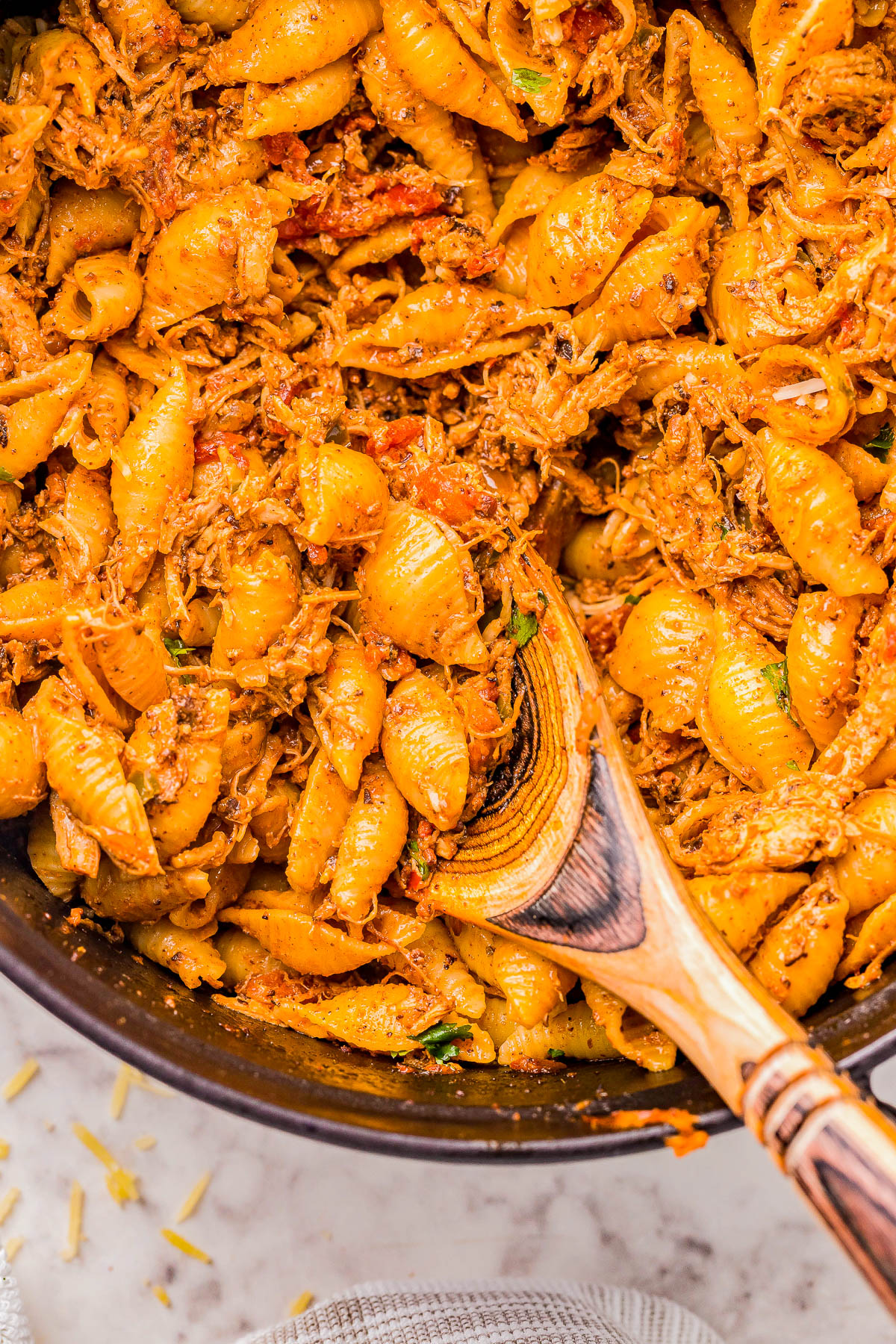 Seasoning  the Chicken – When you are seasoning the chicken, I like to really get in there and push the cumin and smoked paprika spice rub onto the chicken with clean fingers.

Cooking the Chicken – When I’m going to cook it, I push the chorizo to the sides of the Dutch oven to make room for the chicken in the center.

This infuses the chicken with the rich sweet and spicy flavors of the chorizo since it will be searing atop a bit of the grease.

Searing the chicken will also help create a flavorful crust that provides an appetizing color and more importantly seals in moisture. 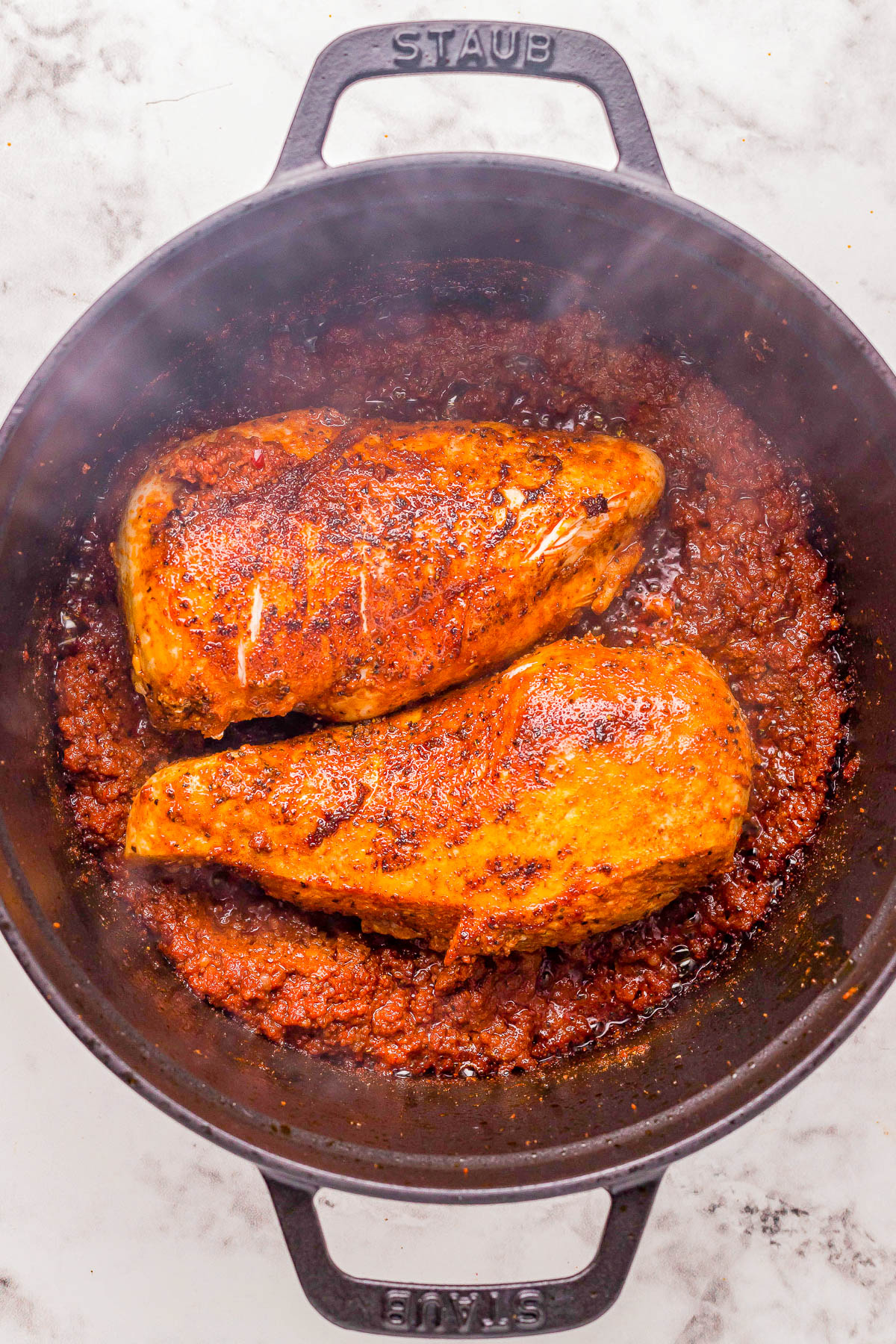 Pork Chorizo – Remember to select a Mexican or uncooked style pork chorizo rather than a cured or semi-cured Spanish style chorizo.

Cream Cheese – In any kind of sauces, cooking, or baking, I only recommend full-fat, brick style cream cheese.

Do not use anything labeled lite, fat free, or “whipped”. Those are cream cheese “products”, largely comprised of water, which isn’t going to give you a creamy sauce and will instead boil off and evaporate.

I like to cube it to encourage it to melt quicker and easier rather than adding it in one large chunk.

No heavy cream on hand? You can get away with half-and-half although the sauce won’t have quite as much richness.

Creamier Sauce – If you want to make a creamier sauce or just have more sauce in general, you can add 1/2 cup heavy cream and 6 tablespoons of cream cheese rather than the 1/3 cup and 4 tablespoons called for, respectively.

Drain the Tomatoes – You need a small can of diced tomatoes for the recipe and I recommend draining them.

Jalapeños and Spiciness – Want to make this chicken chorizo pasta recipe spicier? Keep the jalapeño seeds in the mix instead of tossing them out. To make it much more spicy, use a serrano chile pepper rather than jalapeno pepper.

To make the dish less spicy, rely on the natural spiciness from the pork chorizo and omit the jalapeno peppers.

Don’t Skip the Cilantro – This pasta has a rich, earthy, mild smokey flavor which pairs perfectly with the sweet aromatic citrus flavor from the cilantro. It’s the best garnish for creating a bright and fresh finish! I love to add tons but add it as desired.

*Make sure to select a Mexican-style pork chorizo that's similar to raw ground sausage and NOT a Spanish-style chorizo which is cured or aged and resembles something more like a pepperoni or hard salami.

One-Skillet Tex Mex Mac and Cheese — An EASY recipe that’s made in ONE skillet so you don’t have to cook the pasta separately!! Loaded with ground beef, peppers, tomatoes, cheese, and cilantro! A family FAVORITE that feeds a crowd!! 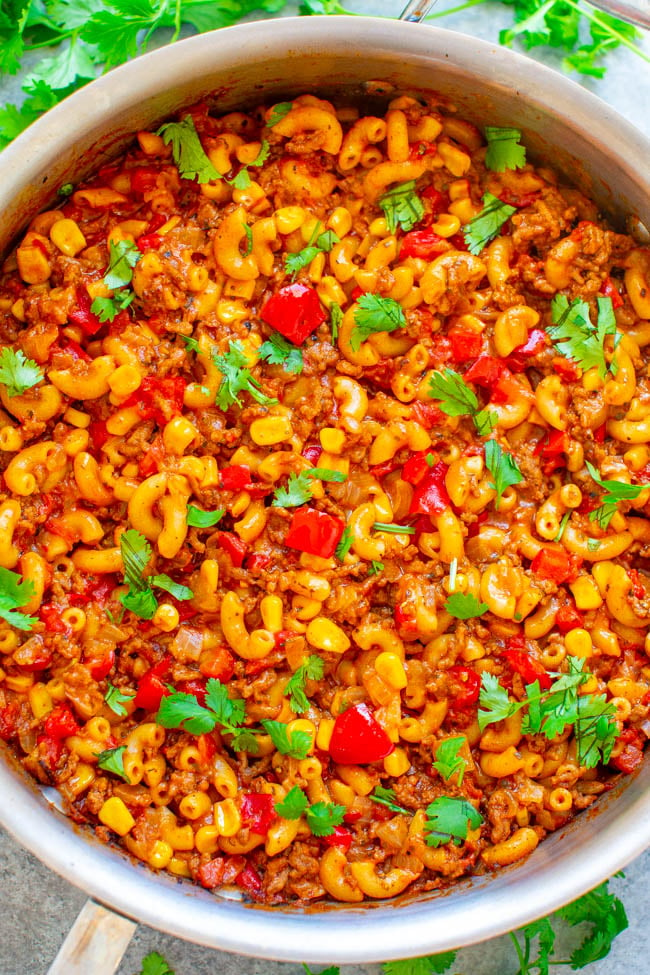 One-Pot Taco Pasta – An EASY recipe that’s ready in 20 minutes, made in ONE skillet, and loaded with Mexican-inspired flavors!! A family favorite that’s great for busy weeknights!! 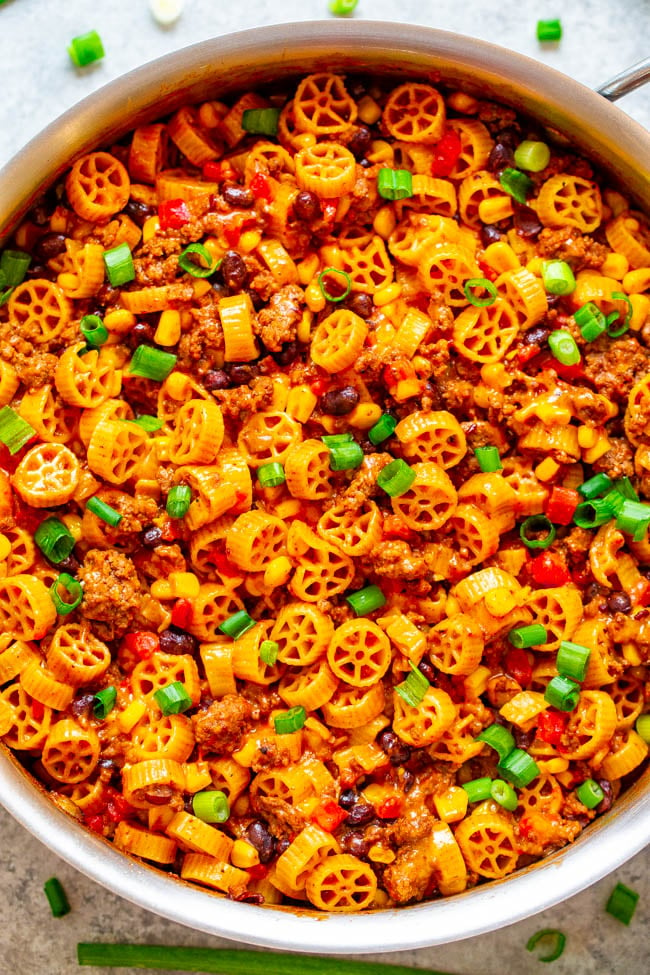 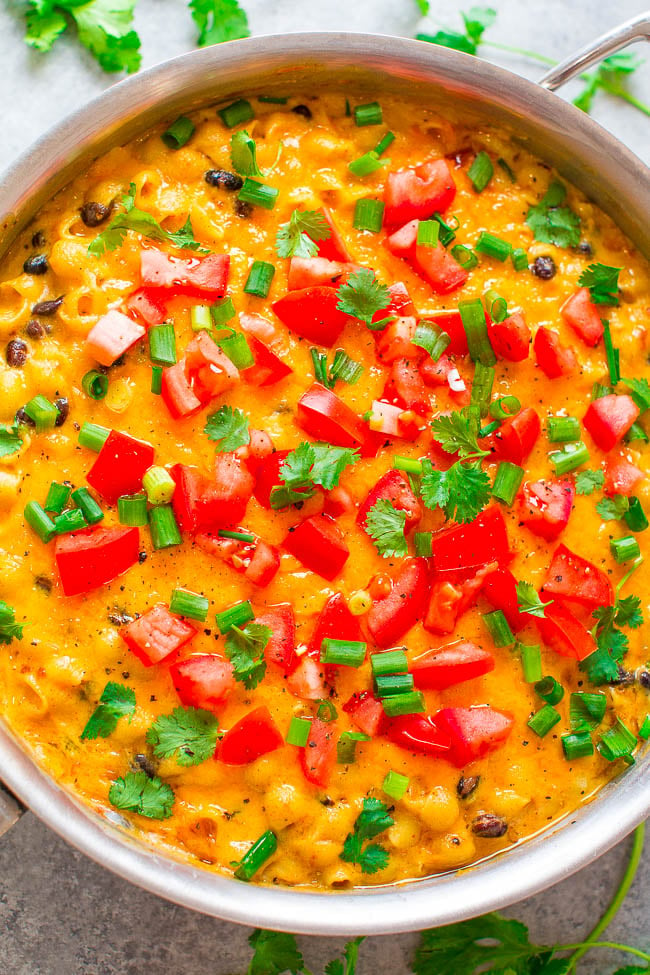 One Skillet Beef Taco Pasta – An easy recipe that’s ready in 20 minutes, made in one skillet, and loaded with Mexican-inspired flavors! A family favorite that’s great for busy weeknights! 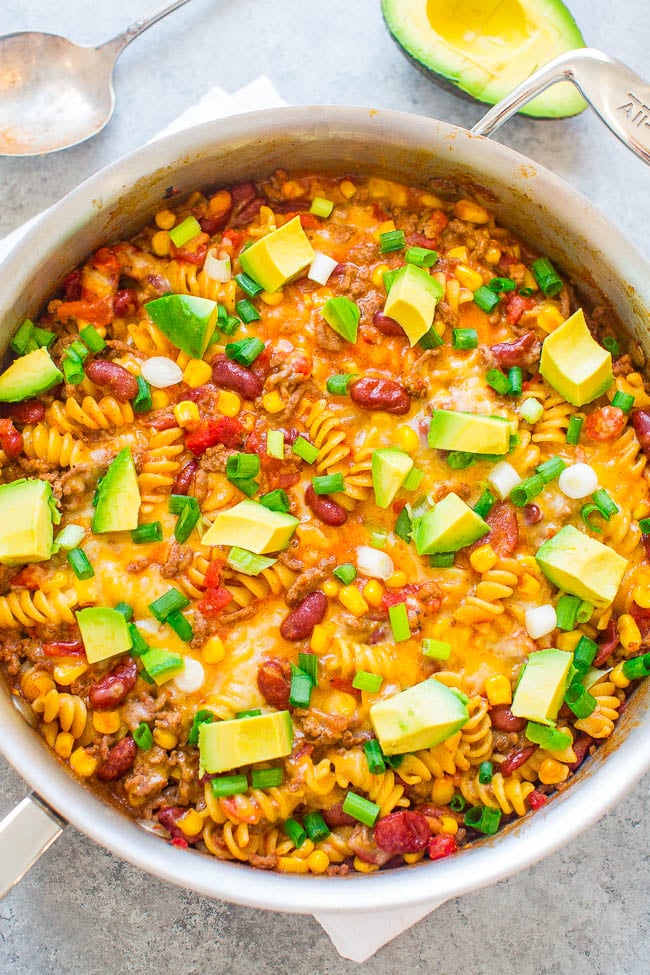 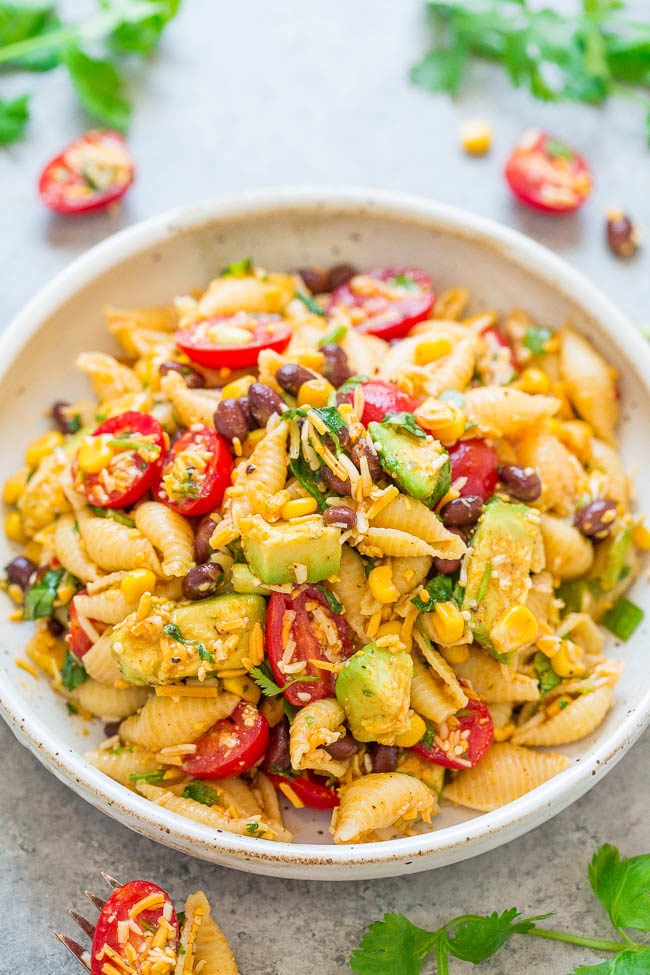 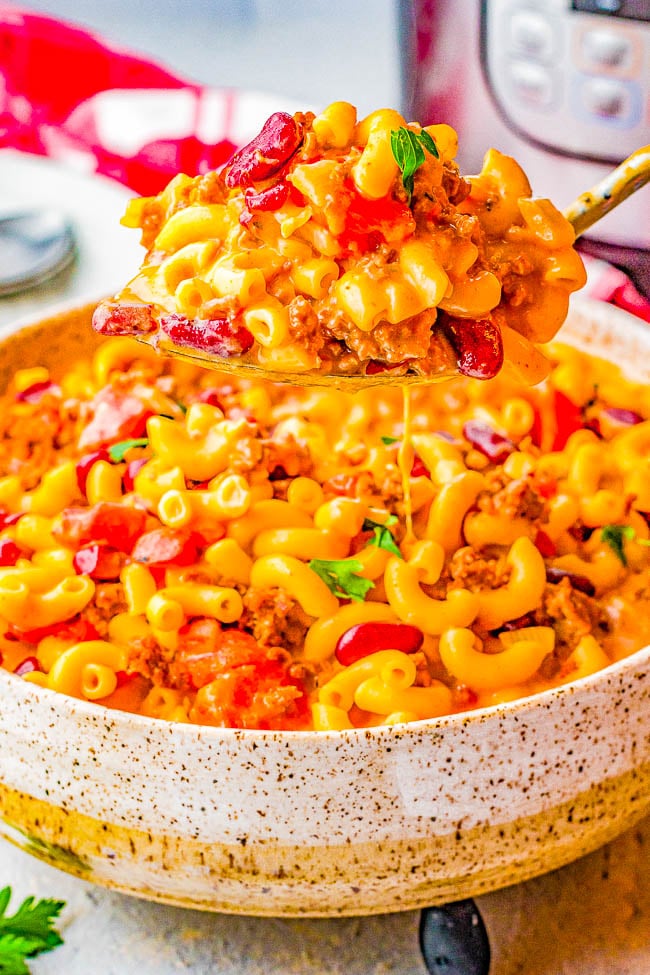 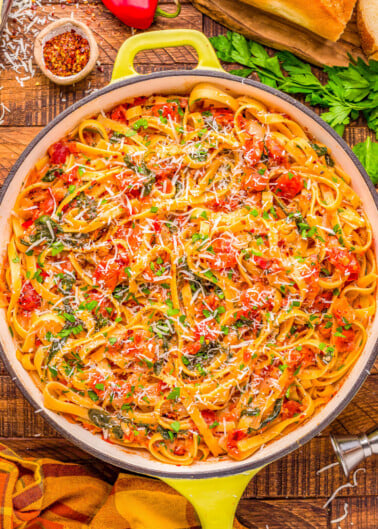 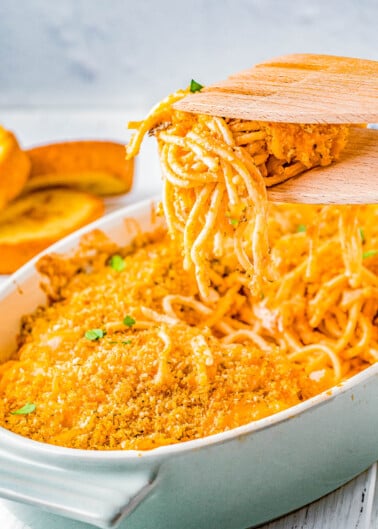 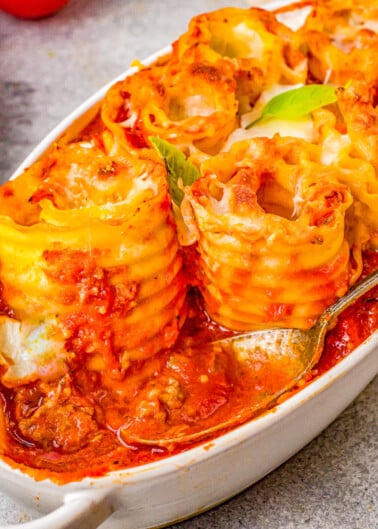 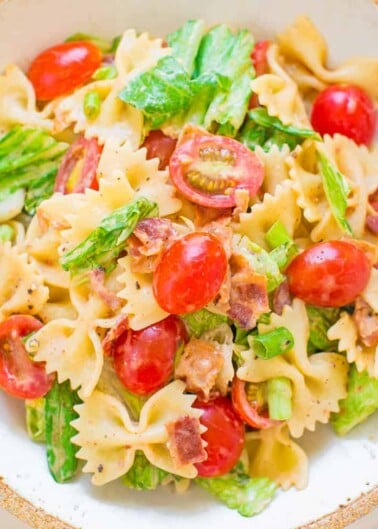