Chocolate Cinnamon Rolls — This ultra chocolaty twist on classic cinnamon rolls is made with doctored up chocolate cake mix and oodles of chocolate frosting!! Soft, tender, fluffy, and EASY!! Calling all chocaholics, these are for YOU!! 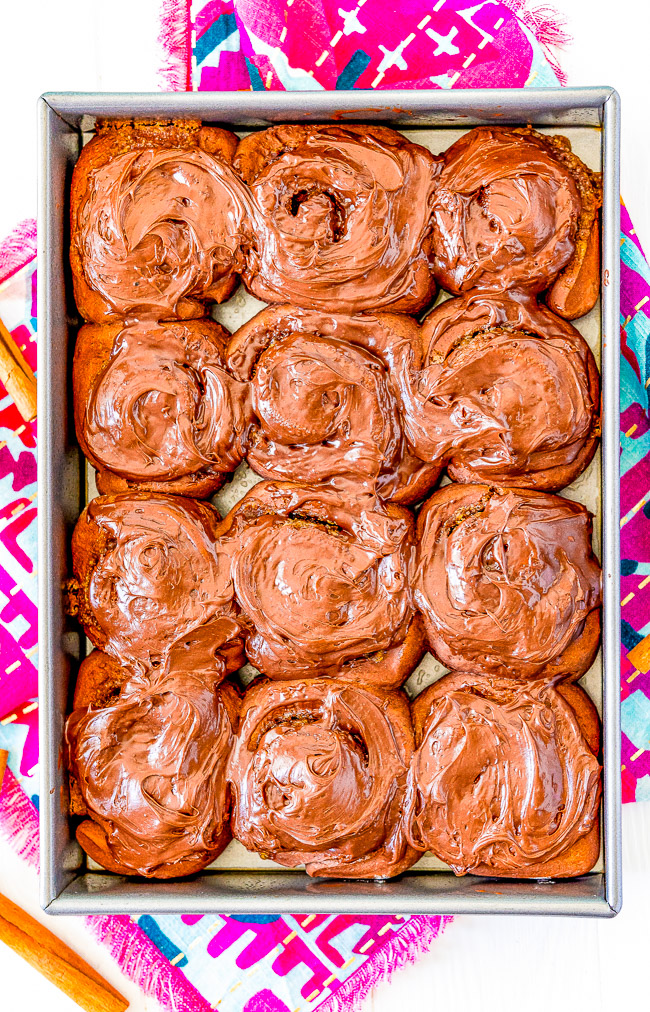 Cinnamon Rolls … Made with Cake Mix!

These cinnamon rolls are soft, tender, and are for true chocolate lovers! I used a box of devil’s food cake chocolate cake mix as a shortcut. It really adds the perfect amount of chocolate flavor.

Combined with creamy chocolate frosting on top, you’re in for a real treat with these ultra chocolaty cinnamon rolls!

Chocolate cake mix cinnamon rolls are a wonderful treat for holiday mornings, special brunches, or make them for a decadent weekend breakfast. 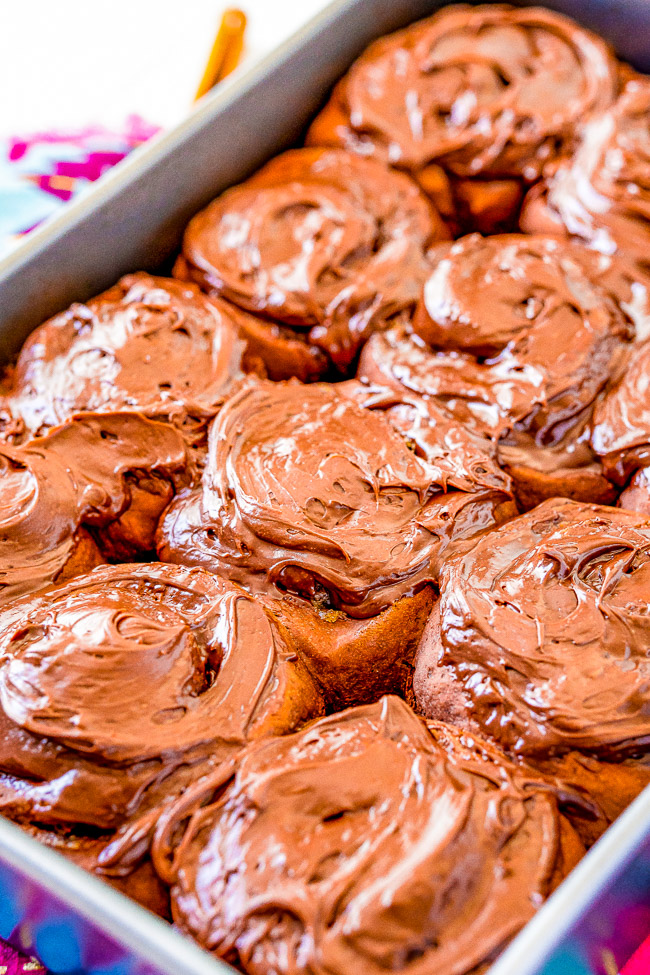 For these easy peasy cinnamon rolls, you’ll need to have: 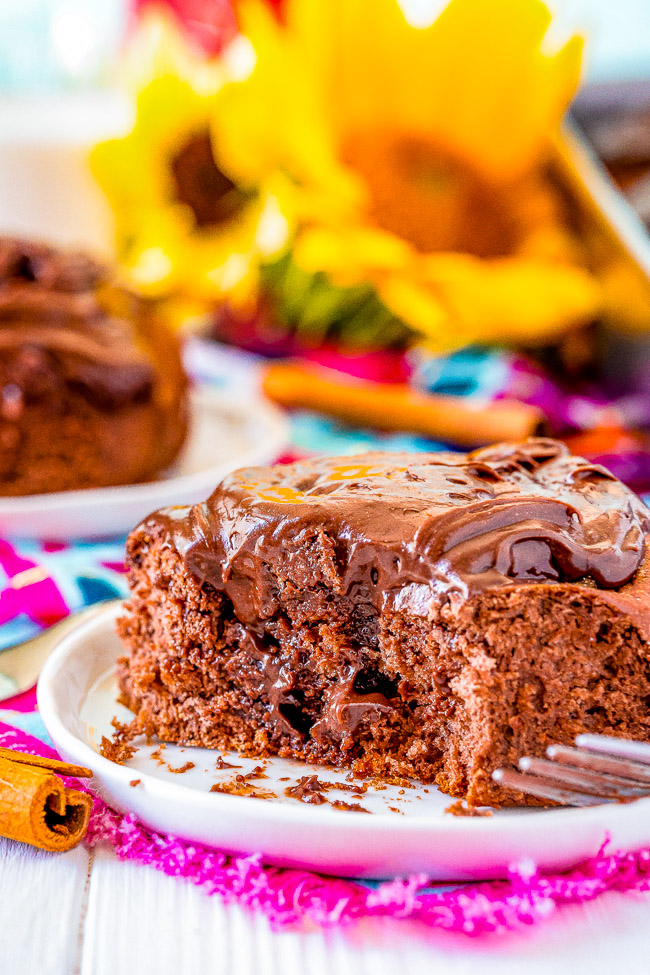 How to Make Chocolate Cinnamon Rolls

Begin by combining the water, dry active yeast, and granulated sugar and waiting for about 5 minutes while the yeast blooms. If nothing happens, and you don’t see any bubbles, frothing, or basically there’s no action, your yeast is dead. Start over with fresh yeast.

Add the bloomed yeast mixture to a stand mixer along with the cake mix, oil, flour, and beat with the dough hook for about two minutes. If the dough is very sticky and tacky and just isn’t coming together, add a bit of additional flour as I outlined in the recipe section below.

After the dough has come together, shape it into a ball, place it back into the mixing bowl, and allow it to rise (proof) for 1 hour. 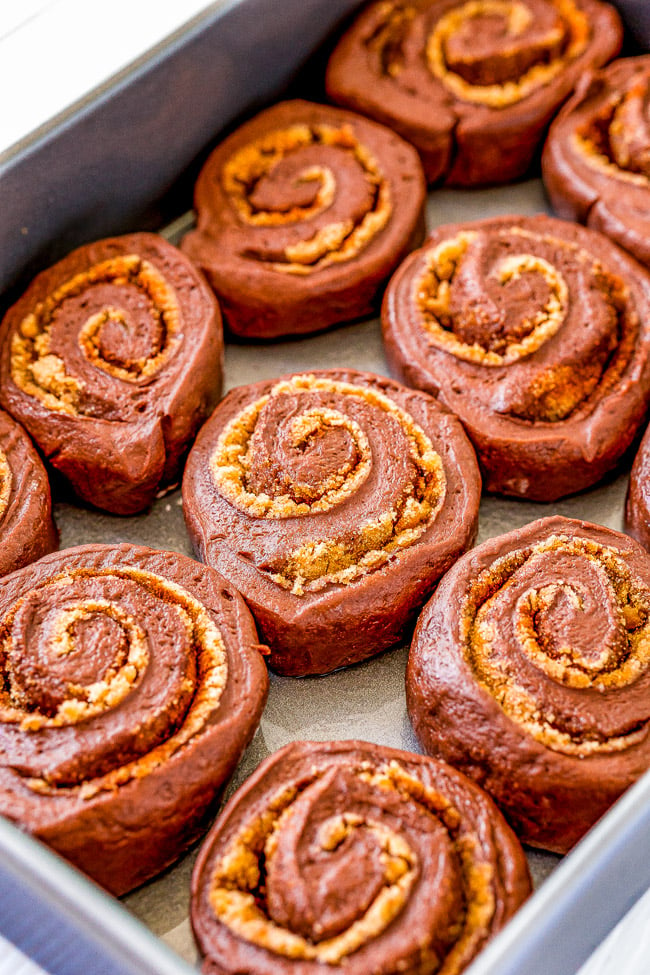 Punch it down, and transfer it to a lightly floured counter top before rolling it out flat with a rolling pin.

Brush it with a melted butter and vanilla extract mixture, sprinkle with brown sugar and nutmeg, before rolling it into a tight cylinder shape, or log as I like to call it.

Slice the log into 12 even pieces, place them in a greased 9×13-inch pan, cover with plastic wrap, and allow them to rise for 30 minutes before baking them off. 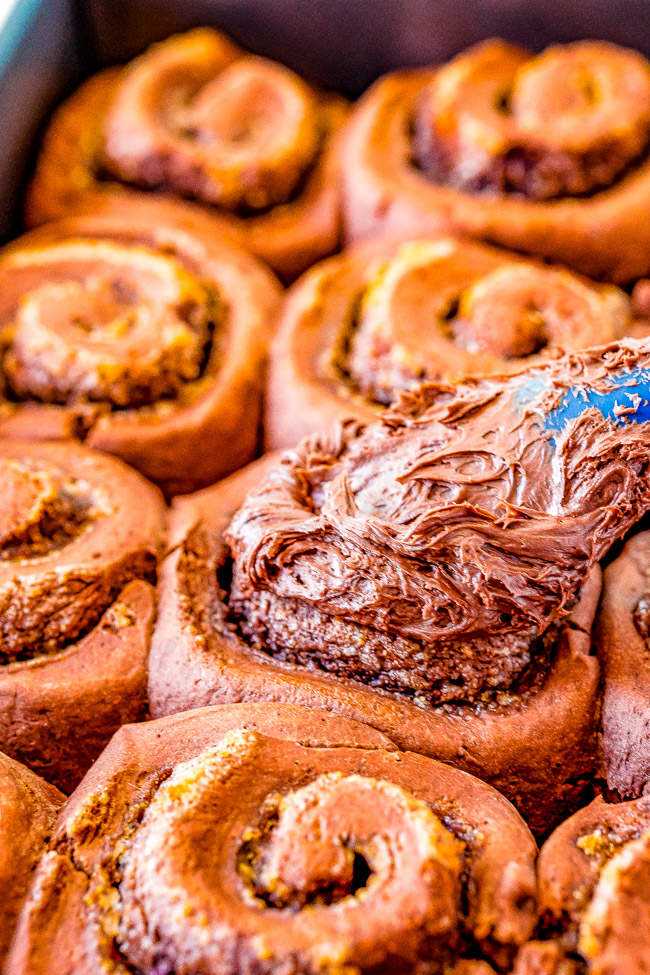 After baking, frost the soft cake mix cinnamon rolls with chocolate frosting and then get ready to dig in! For these rolls, I used a 16-ounce tub of store bought chocolate frosting in a shelf-stable tub. No one will ever know, I promise!

I also have this scratch chocolate buttercream frosting recipe that is excellent.

Feel free to research Google and make another scratch chocolate frosting if you’re so inclined. However, for these chocolate cinnamon rolls, since I was already using a box of cake mix as a shortcut, I followed suit and used store-bought frosting to save time. Life is about shortcuts, especially if you’re making these for a holiday breakfast or special brunch.

You can add a pinch of cinnamon to whatever chocolate frosting for even more flavor! 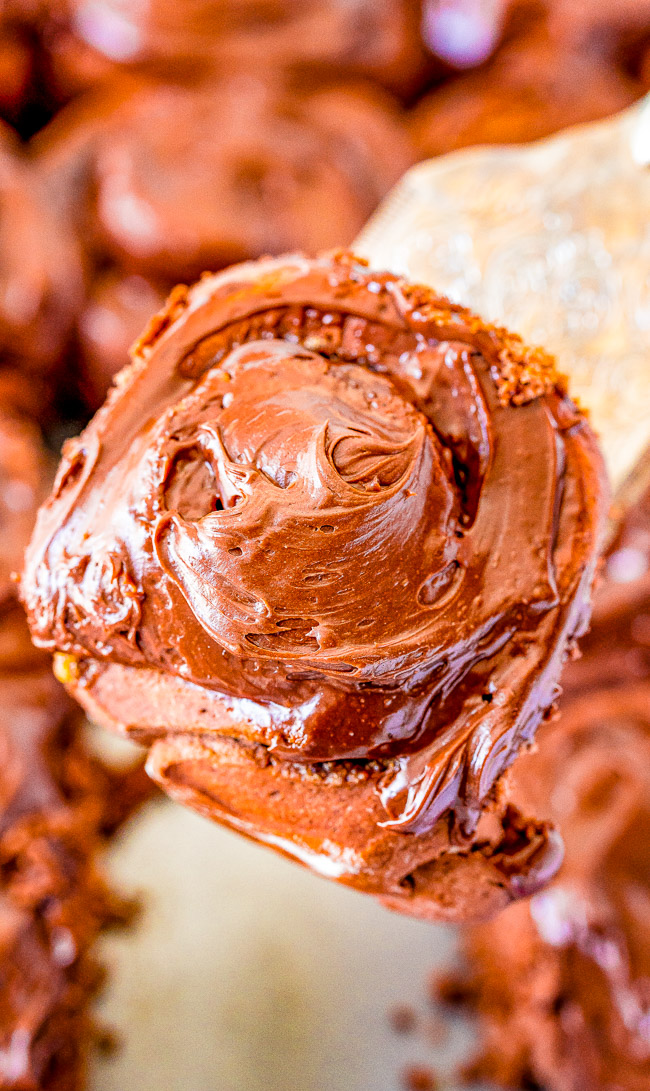 What Type of Yeast Should I Use?

Do not use instant yeast with this recipe and instead use active dry yeast, no exceptions. 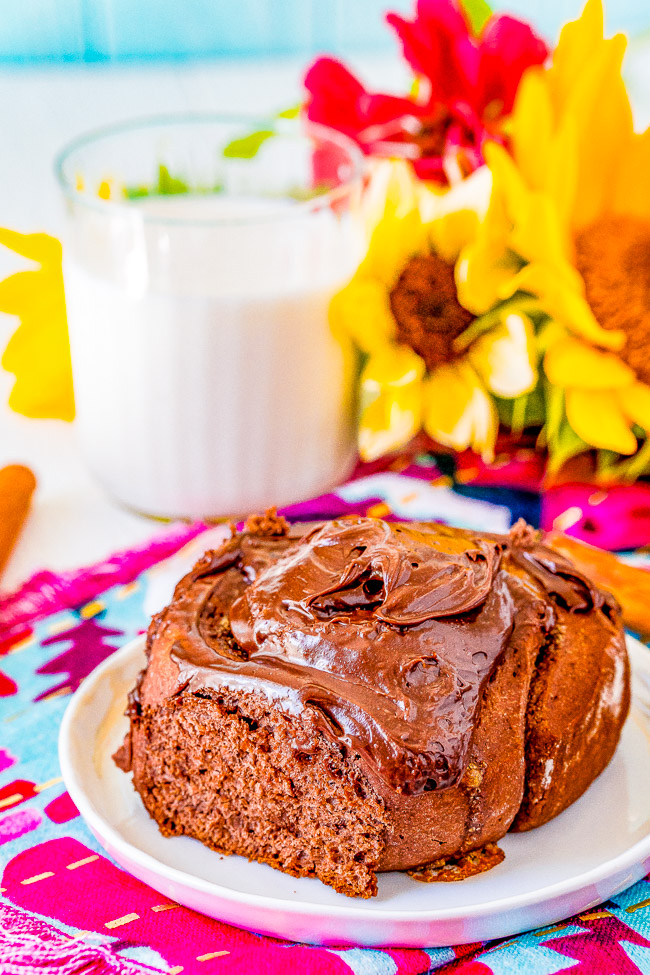 Can I Make Cake Mix Cinnamon Rolls in Advance?

I haven’t tried preparing these cinnamon rolls made with cake mix in advance, such as the night before. If you do try it, I would refrigerate them at the point where they are in the pan and are going to have their 30 minute rise, in step 12 in the recipe. Cover with plastic wrap, and refrigerate overnight, before baking them off the next morning.

Again, I haven’t personally tried to see how that will work, but that is my best educated guess as to where you’re stopping-to-refrigerate-overnight point would be. 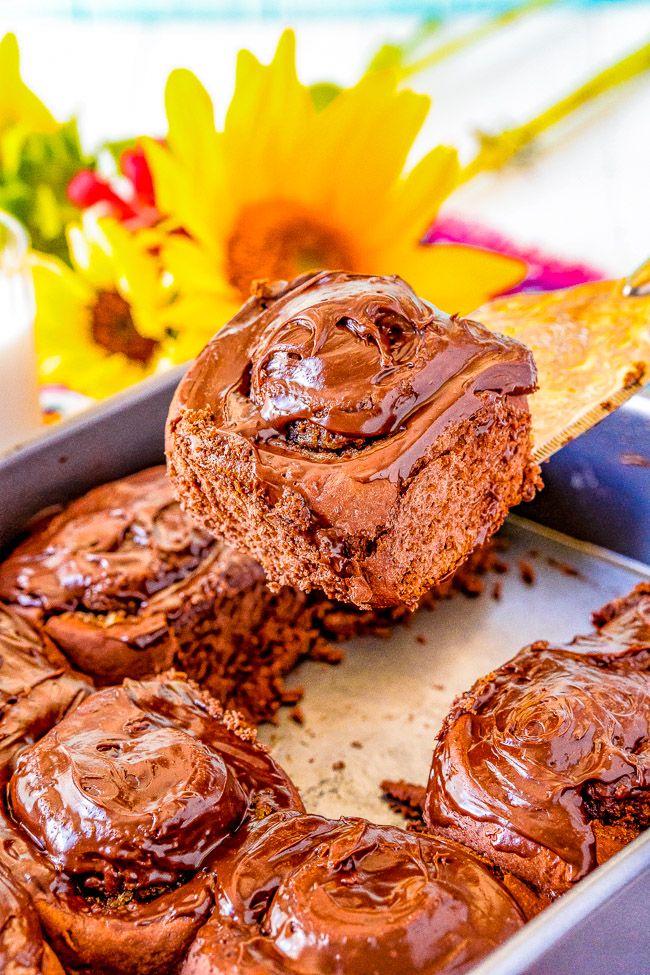 It can be a little tricky to tell when baking anything that’s chocolate if it’s done or not due to the inherent dark color, but look closely and make sure the chocolate cinnamon rolls appear set.

If you’d like to make Mexican Hot Chocolate rolls, you can add in dehydrated marshmallow bits to the filling and on top of the frosting.

For those of you who are heat seekers and a little adventurous, you can add ¼ teaspoon of cayenne pepper powder to the filling mixture if you want things spicy. This is a spin on what is known as ‘Mexican chocolate’, which traditionally is just a blend of chocolate, vanilla, cinnamon, and nutmeg. Although in recent years it is more commonly associated with heat, hence the pinch of cayenne. 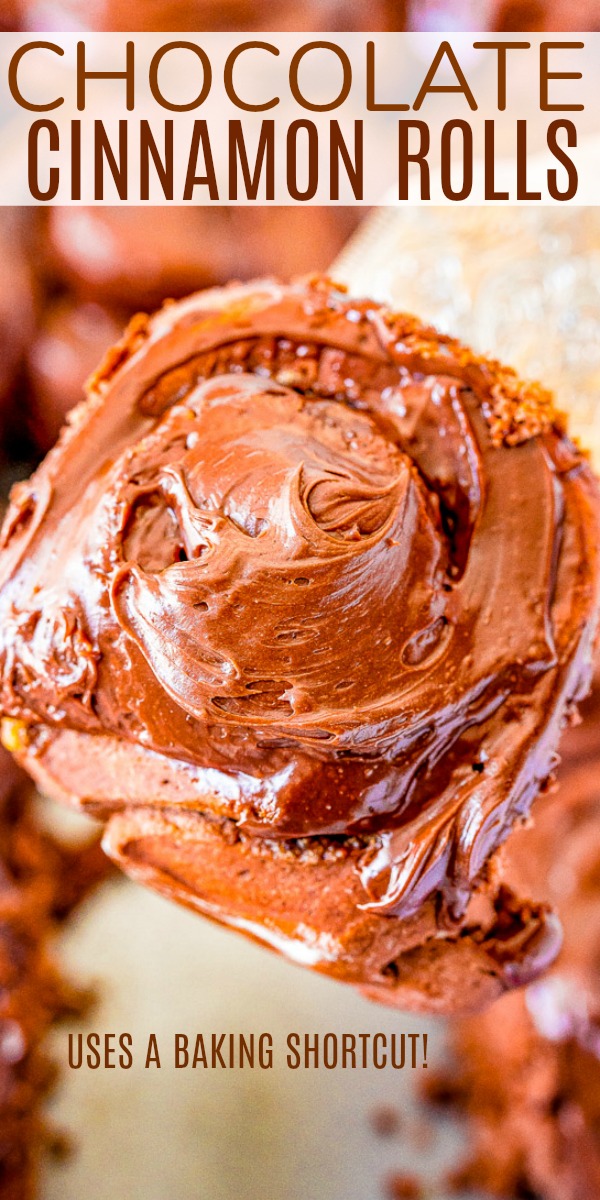 What Type of Cake Mix Should I Use?

Any chocolate cake mix can be used for this recipe, it doesn’t have to be devil’s food cake, that’s just what I used.

There are so many varieties of chocolate cake mix including devil’s food cake, milk chocolate, dark chocolate, triple chocolate, and more. I am partial to Duncan Hines boxed cake mixes overall because that’s why my mom always used but use what you know you like. 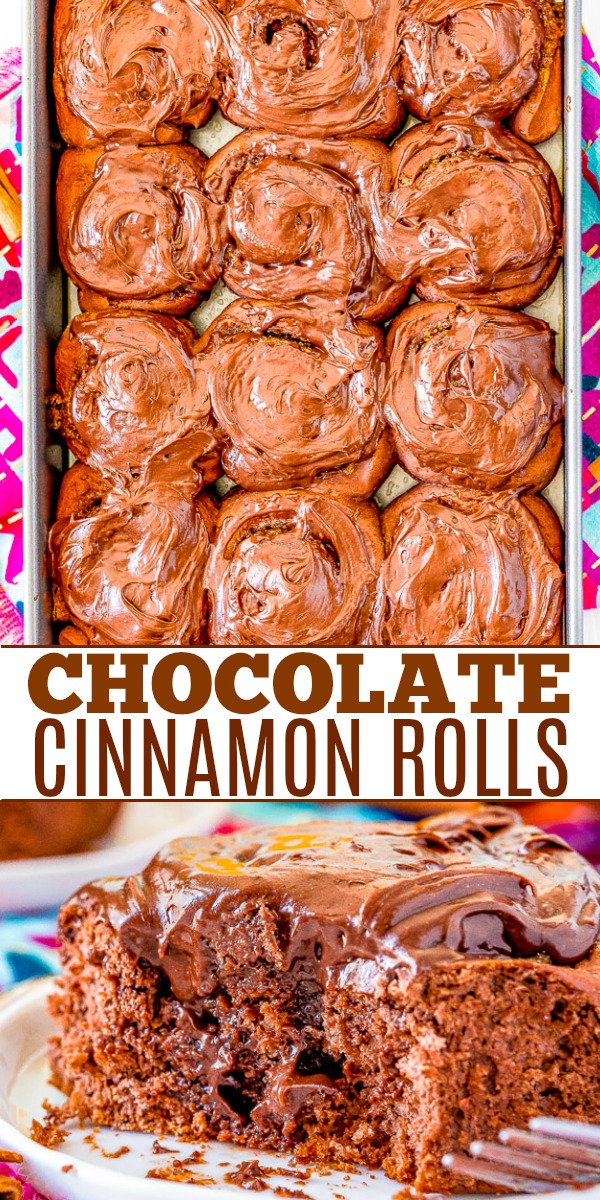 Can I Omit the Cake Mix?

If you live in an area where cake mix isn’t common, I am sorry that I don’t know what to suggest in place of it. My recommendation is to search online for the best looking 100% scratch chocolate cinnamon roll recipe and go with that.

Additionally, check below for my favorite cinnamon roll recipes, most of which are from scratch. These Overnight Cinnamon Rolls are some of my favorites because they taste better than a Cinnabon!

*If you have a stand mixer, this is the time to use it. If you don't and all you have is a handheld electric mixer, I do not recommend using a handheld mixer. It will likely not be powerful enough to effectively mix up the dough. Instead, I recommend using a wooden spoon and good old-fashioned elbow grease.

Overnight Cinnamon Rolls — These overnight cinnamon rolls are ultra soft and fluffy thanks to the buttermilk in the dough. They remind me of Cinnabon! Top them with homemade cream cheese frosting and enjoy! 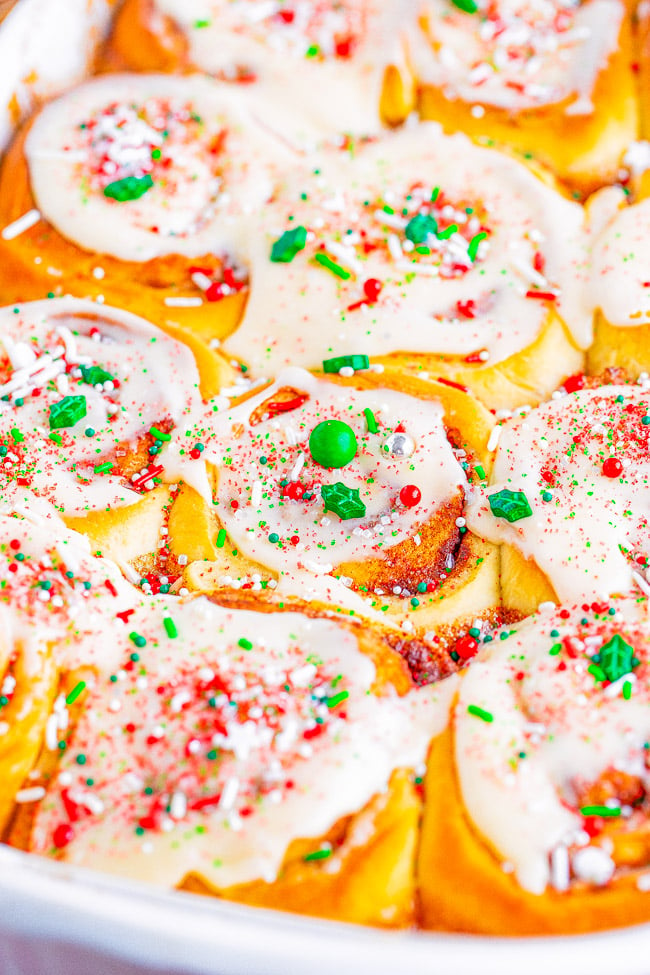 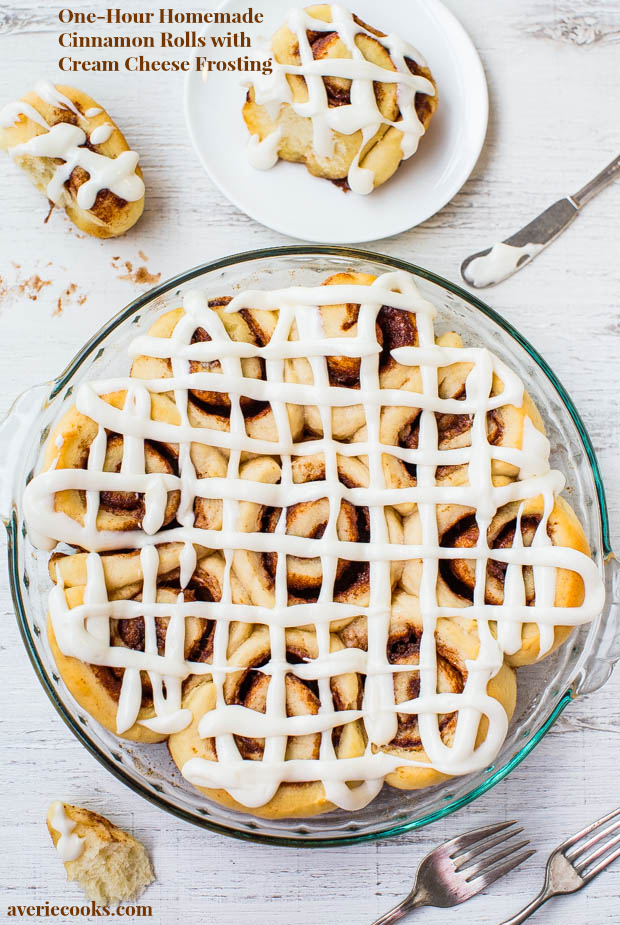 The Best Glazed Orange Sweet Rolls — These homemade orange rolls are filled with a buttery orange filling and are topped with a simple orange glaze. They can be prepped the night before, if needed. 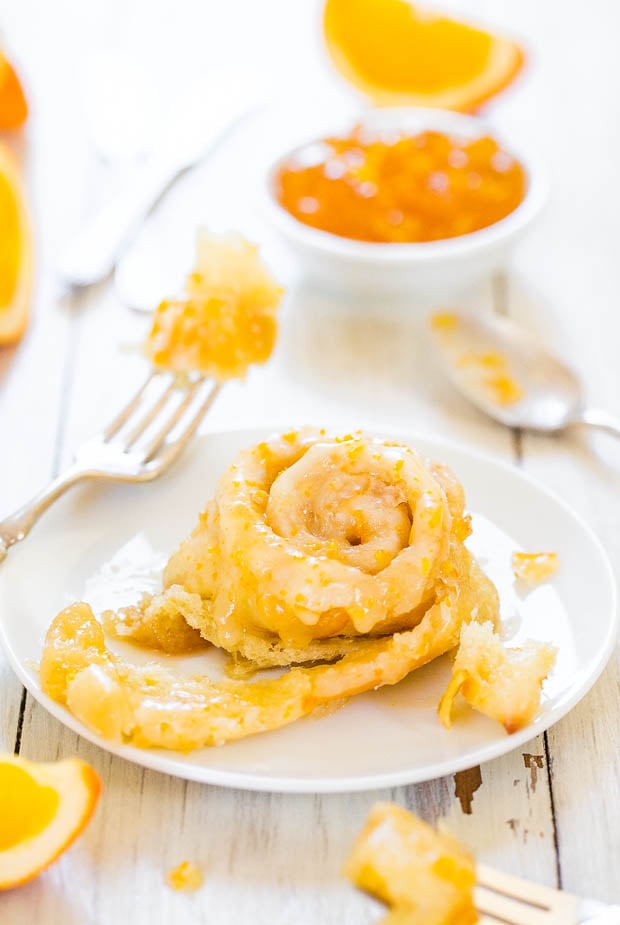 Pumpkin Cinnamon Roll Bake — The recipe is easy, ready in 40 minutes, and you don’t even have to make scratch cinnamon roll dough. 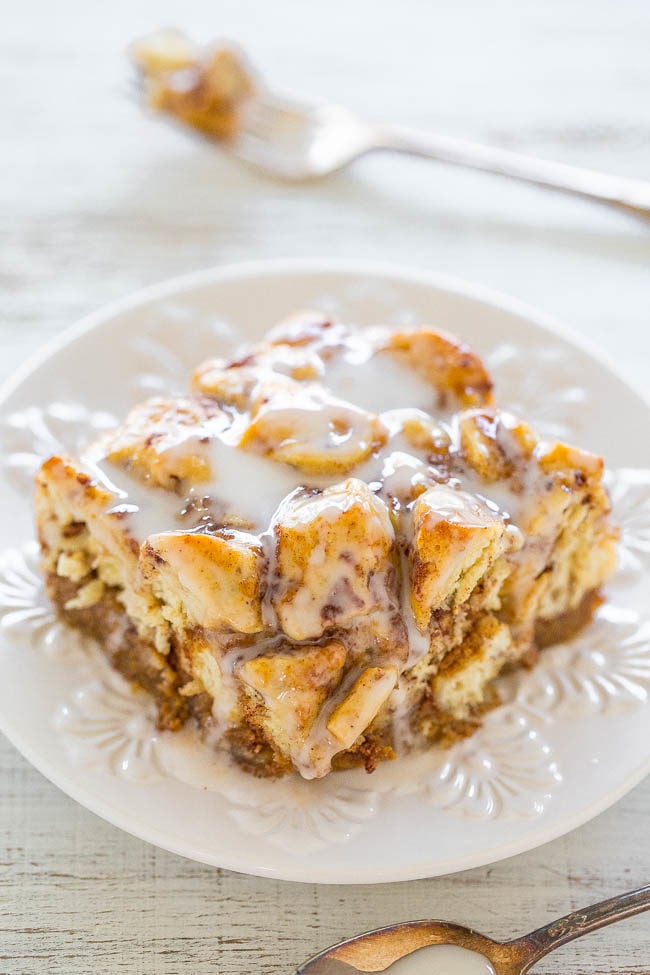 The BEST Pumpkin Cinnamon Rolls — The glaze soaks into the nooks and crannies and adds even more moisture and softness. Total gooey, cinnamon-and-sugary, juicy perfection.

Caramel Apple Cinnamon Roll Bake — This cinnamon roll recipe with apples and caramel sauce is easy, ready in 30 minutes, and you don’t even have to make scratch cinnamon roll dough.

Nutella Cinnamon Rolls with Vanilla Glaze — A can of crescent rolls never tasted so good as when they’re stuffed with Nutella and rolled up. Ready from start to finish in 15 minutes, no joke