Creamy and Crispy Hash Browns Frittata – The eggs are creamy and the potatoes crisp up, creating both softness and a bit of crispy texture and crunch. A perfect breakfast or breakfast for dinner meal! 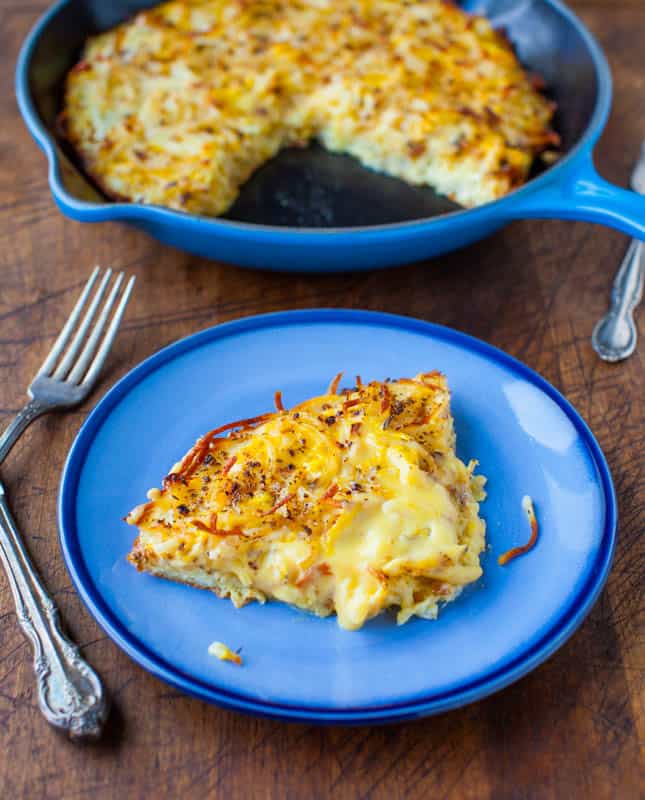 This is not my kind of food, but it’s one hundred percent my husband’s kind.

Since I was leaving him home alone with our five year old for four days while I went to Barbardos, I figured the least I could do was make him some comfort food before I left.

I had the ingredients on hand and started tossing things into my cast iron skillet and hoped for the best. I placed three cups of refrigerated hash brown potatoes in the base of the skillet. Although I’m sure you could grate your own, I used the bagged variety for convenience and simplicity.

Then I saw a long-lost can of cream of potato soup lurking in the back of my cupboard that I’ve had since the dark ages and spread it over the potatoes. I do mean spread the soup, rather than pour it. I was reminded just how thick cream-style soups are but the benefit is that it created an almost cheesy texture, without actually using any cheese. However, if you have some shredded cheese, feel free to sprinkle a handful or two over the soup. 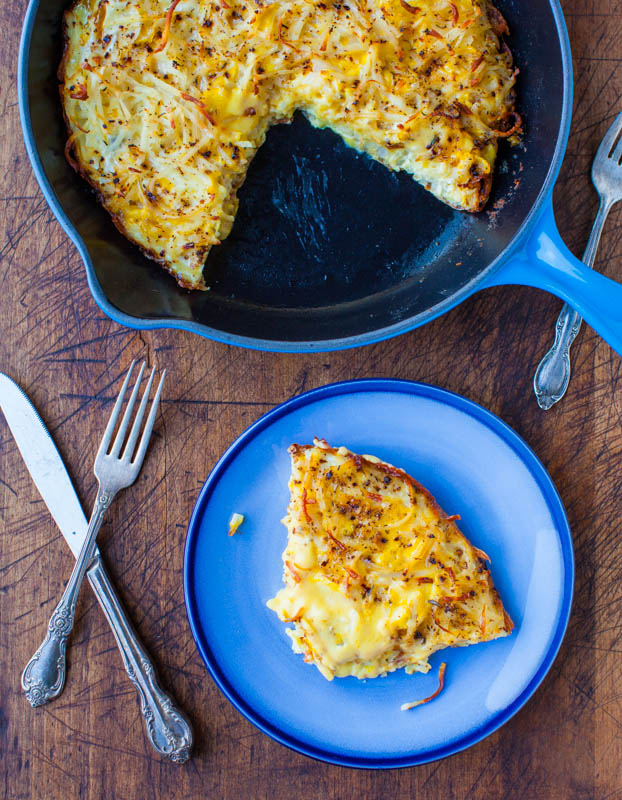 Next, I beat three eggs and poured them over the soup and then topped with one additional cup hash browns. My strategy was to place some potatoes on the top surface so that they’d crisp up while baking, Scott loves the well-done parts of food, especially well-done potatoes and since this was for him, I wanted to ensure some crispy topping bits and pieces.

I also drizzled a couple tablespoons of olive oil over the top, added to both encourage the hash browns to brown as well as to add additional richness and flavor. 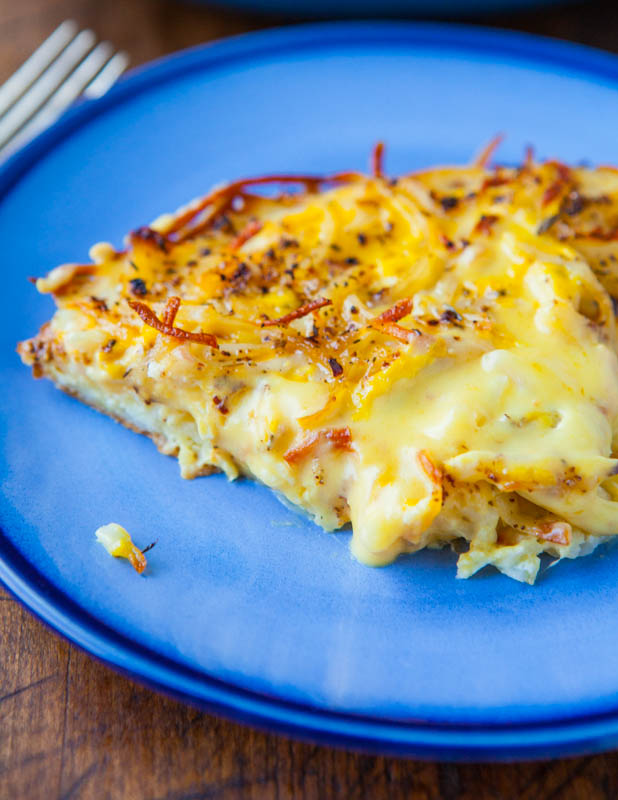 I seasoned the frittata using a favorite Mrs. Dash Chipotle seasoning blend and anything from curry powder to cayenne pepper could be used based on what you have and enjoy. Prepared soup is quite salty so I omitted adding any salt, but sprinkled a bit of pepper.

Between the weight of the cast iron skillet, the four cups of potatoes, can of soup, and three eggs I got my bicep workout in for the day just hoisting the skillet into the oven. The beauty of cast iron is that because of it’s mass and conductivity, foods cooked in it cook so evenly and beautifully, but I do need to put on my weightlifting gloves on before gripping it because it weighs a ton. 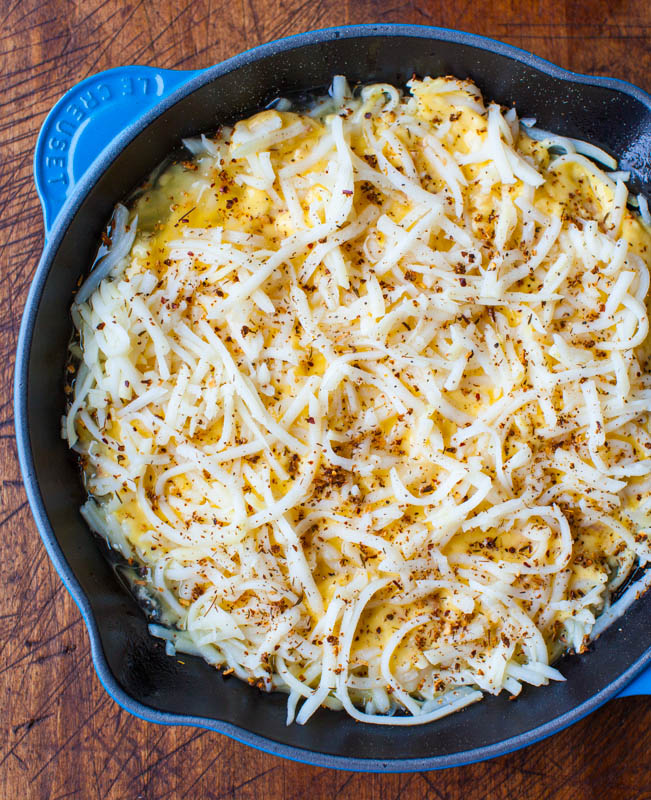 After about fifty minutes, I pulled the skillet from the oven, even though the center had just barely set and wasn’t overly brown. I knew that the carryover heat from the hot skillet would continue to cook the food, which is something to be mindful of when cooking with cast iron. I’ve read that even when food is out of the oven, it will continue to cook by another twenty percent or so, as long as it remains in the cast iron.

If you wait to pull food from the oven until it looks fully done, it will likely end up too well done after it cools in the skillet. And the frittata did need to cool and set up in the skillet so that it wasn’t a creamy, hot, soupy mess.

After it cooled, I used a rubber spatula to sliced it and put the wedges into a Tupperware for Scott to reheat in less than a minute for dinners for him and Skylar while I was gone. 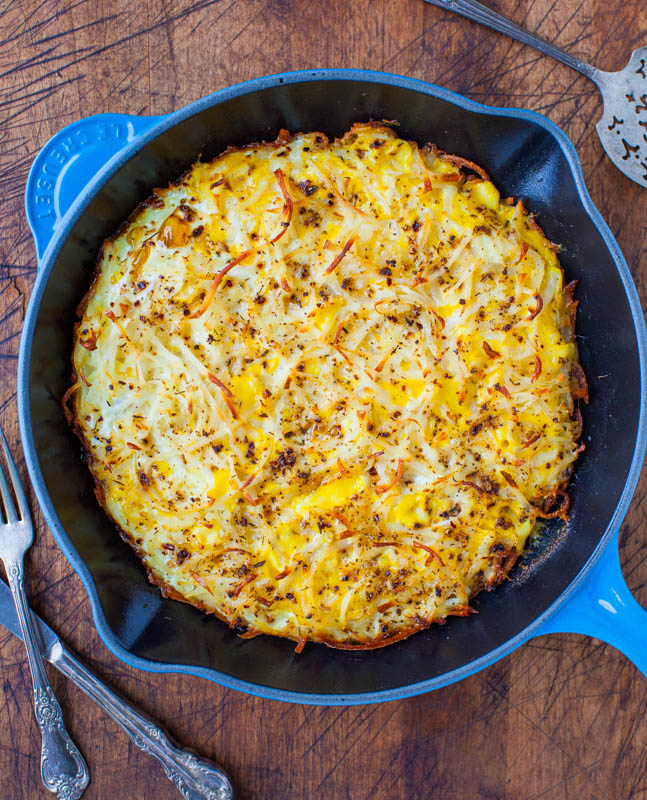 I got an email saying they loved it. Soft and creamy in the middle yet crispy and crunchy on the edges and top. It was packed with flavor from the soup and seasonings, and Scott was convinced that I used cheese in this comfort-food special. However, he’s frequently confused about what is actually in a recipe.

I told him that although I didn’t use any cheese, I did use potatoes, cream of potato soup, eggs, and more potatoes, which is his idea of a dream meal.

Spicy Baked Eggs and Hash Brown Frittata (vegetarian, GF)- Similar to the frittata made today, minus the cream of potato soup, and instead frozen spinach is incorporated 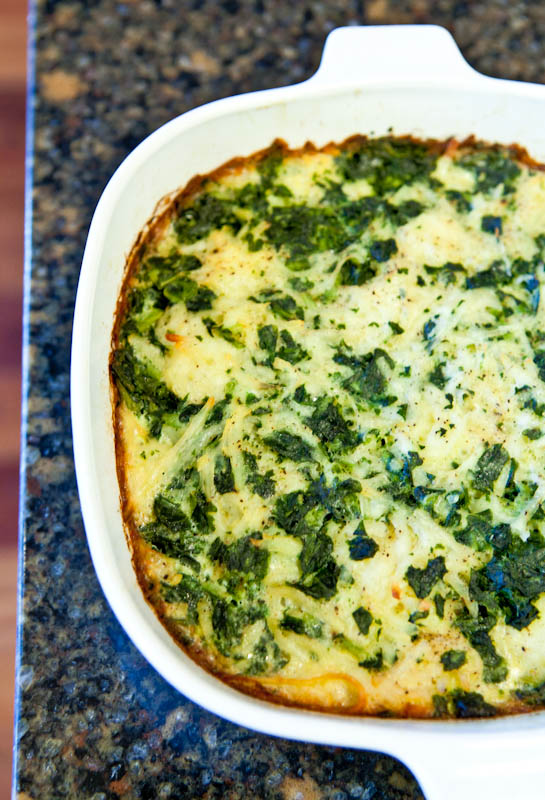 Pumpkin and Cheesy Baked Potato Casserole (vegan, GF) – Pumpkin used in a savory application, in conjunction with thinly sliced and layered potatoes, gives this dish great richness and Scott thought I used cheese in it, and instead it’s the pumpkin that gets credit for the cheesey qualities 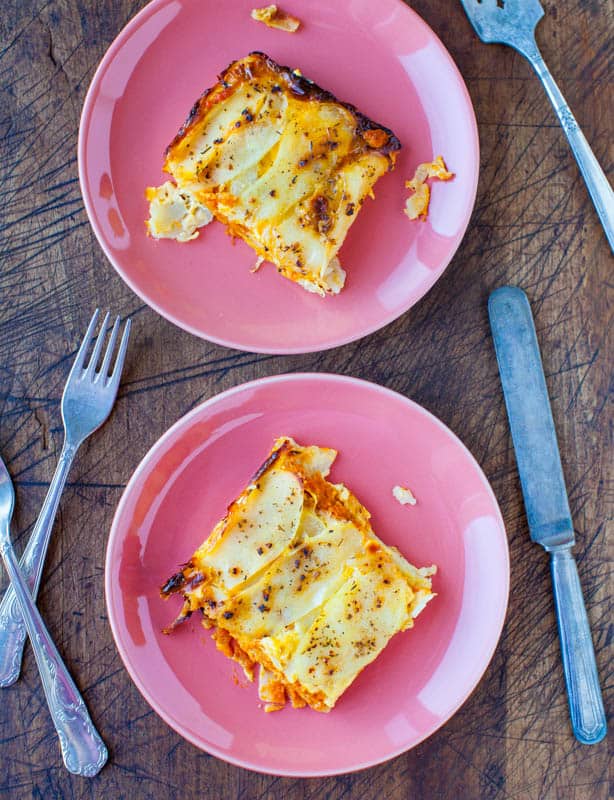 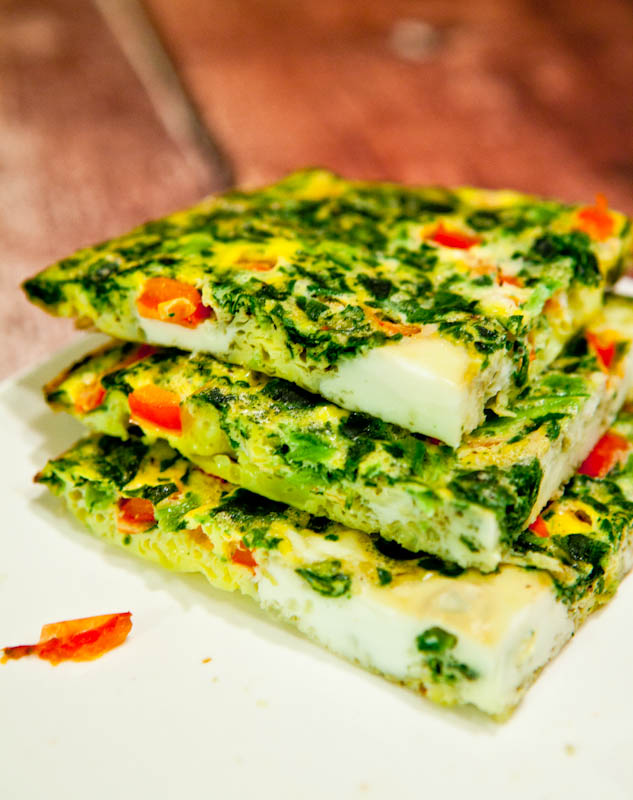 Cheezy Vegetable Bake (vegan, GF) – A can of soup is also used in this easy, one-pan vegetable bake. Nutritional yeast provides a cheezy quality which allows the dish to remain vegan if other ingredients used are vegan. I go through so much nutritional yeast and buy it from iHerb. Enter code AVE630 to save you an additional $5 on your order

Do you have a favorite frittata recipe or comfort-food recipe? Breakfast-for-dinner recipe?

What do you bake in cast iron or in an oven-safe skillet?

Lately I’ve been making fast, easy, toss-together dinners, using whatever I have on hand and baking it all in my cast iron skillet. I’m convinced that almost any combination of eggs, potatoes, fresh or frozen vegetables, beans, corn, cheese, sour cream, you name it, will all work out.

Some of my brainchild ideas have worked out better than others and we’ve had some creative ones, but there have been no flops and I’ve made some meals that are new-to-us and have spruced up our dinners. We usually eat half of the batch one night, and then the next night I reheat the leftovers in under one minute, a nice bonus.

However, I’d still rather use my cast iron for a Chocolate Chip Peanut Butter Oatmeal Skillet Cookie than a frittata.

Have a safe, wonderful, and very Happy Thanksgiving!