Vegan Banana Muffins — These easy banana muffins are extra fluffy and moist thanks to the combination of coconut oil and ripe bananas in the batter. This is a quick and easy muffin recipe you’re bound to love! 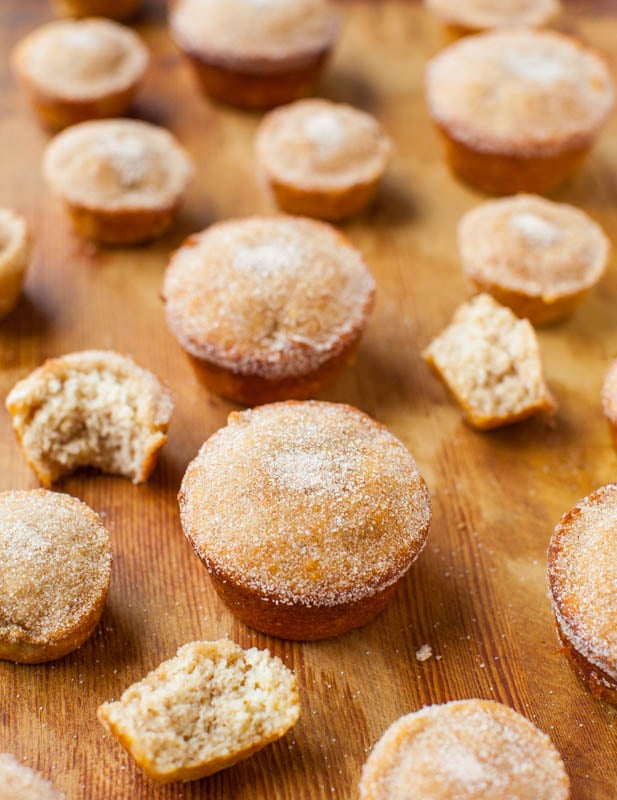 These moist banana muffins embody everything I was trying to achieve. No butter, no eggs, and no mixer needed. These vegan muffins are fluffy, soft, light, and moist. And they remind me of mini donuts, a huge bonus.

I have many vegan banana muffin recipes on my blog from circa 2009, but they’re anything but light and fluffy. They’re made with almond meal to keep them gluten-free and are much heavier.

I have more recent banana recipes, to the tune of, oh about 35+ banana bread recipes. You can never have too many, right? But they’re not vegan. Although some use oil rather than butter, they all use eggs.

Because I loved the Pineapple Coconut Oil Banana Bread I made a while ago, I figured muffins and mini muffins would be fun, and I kept them vegan. I’m not vegan, but many of my readers are, and some readers watch their egg consumption for health reasons. Plus, sometimes it’s nice to be able to bake vegan if you run out of eggs. Whoops.

These easy banana muffins are surprisingly light and fluffy for an egg-free muffin, which are often more like dense, lead balloons. They’re not too light, though. Banana bread is and should be somewhat dense, and these have just the right amount of substance.

They’re so soft and moist, thanks to the coconut oil and bananas. The smell in your house while they bake is heaven-sent. Bread baking with bananas, vanilla, and coconut oil is beyond scrumptious.

I popped them in one after the next. Just one more. And one more. The ones we didn’t immediately scarf actually got softer on the second and third days, and the flavors intensified. 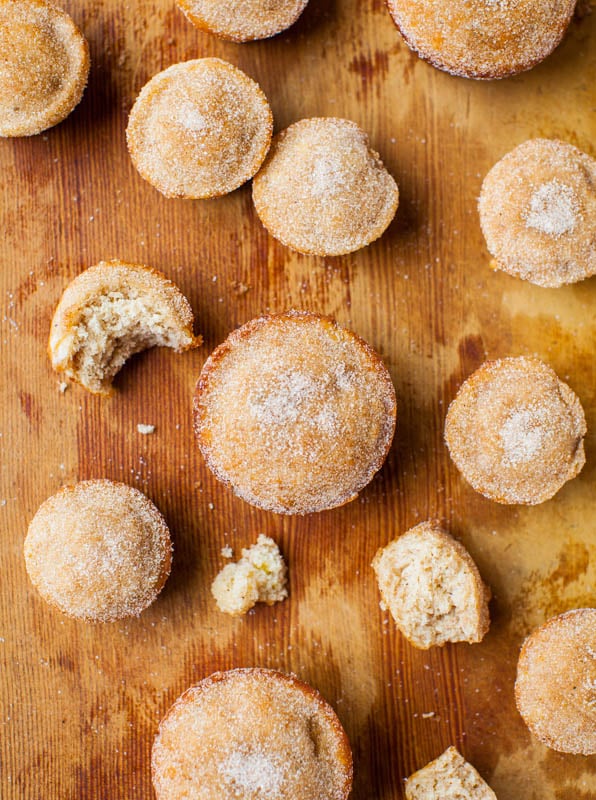 I used Kelapo Coconut Oil Pre-Measured Baking Sticks. They’re pre-measured into half-cup portions and scored the way butter is, which is so handy for baking. Of course, using coconut oil from a jar is just fine too. 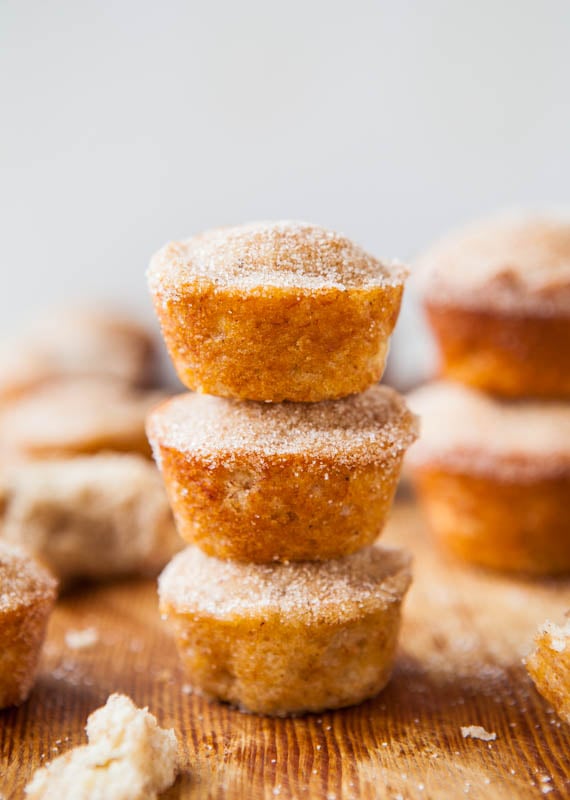 How to Make Vegan Banana Muffins

It’s incredibly easy to make banana muffins with no eggs or dairy products in it. Simply whisk together the dry ingredients in one bowl and the wet in another. Stir the wet ingredients into the dry and mix until just combined.

Divide the batter between regular-sized muffin cups or mini muffin cups — either works! Then, bake until done. A toothpick inserted in the center should come out clean or with a few moist crumbs, but no batter. Tops will be domed, springy to the touch, and will be on the paler side rather than golden.

I dipped the tops in cinnamon-sugar. Everything is better coated in cinnamon-sugar. I didn’t even need to brush on melted coconut oil (or vegan butter) for the coating to adhere. The sugar granules add lovely texture and remind me of eating mini donuts. Except baked and vegan, nice. 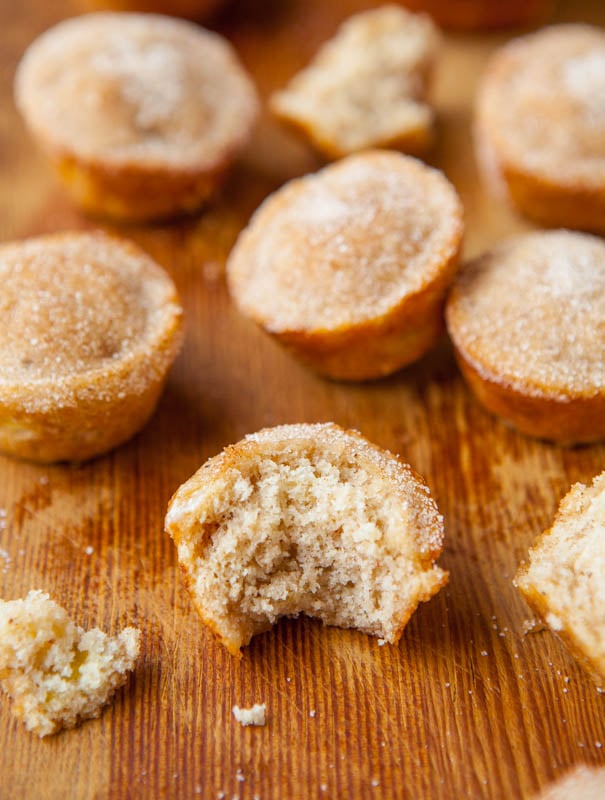 Do I Have to Use Coconut Oil?

As I’ve discussed before when baking with coconut oil, it doesn’t impart much flavor. There’s barely a hint of detectable coconut flavor in these muffins, perfect for those who aren’t as fond of coconut. Normally when people object to coconut, it’s usually shredded or flaked coconut, which are very distinct and powerful, far stronger than coconut oil.

If you’re out of coconut oil or still hung up about trying it, I’m sure you could substitute canola oil, although I haven’t tried it with this recipe and highly recommend coconut oil.

The flavor the coconut oil lends to the muffins is of the can’t-put-your-finger-on-it type. Combined with the sweet bananas, vanilla almond milk, and heavy dose of vanilla in the batter, I was in fluffy, fragrant muffin heaven.

How to Store Eggless Banana Muffins

These vegan banana muffins will keep airtight at room temperature for up to 5 days or can be frozen for up to 3 months. They get softer and the flavor intensifies on the second and third day.

I baked 24 mini banana muffins using a rounded tablespoon of batter. Spray your tablespoon with cooking spray, repeating as necessary, so the batter glides right off into the pan because filling up mini muffin pans can be messy.

After two pans of minis, I made 7 regular-sized muffins in a standard muffin pan

and used a one-quarter cup measure.

A few words of advice: fill both the mini and regular pans to between two-thirds and three-quarters full. You’ll be surprised how much this batter rises, and the ones that were filled more than 3/4-full ended up turning into overgrown mushrooms. I have a knack for that. I want muffin top, not mushroom top.

Note that these vegan banana muffins bake in quite a hot oven to ensure the high heat gives these egg-less wonders as much rise and doming as possible. Watch them closely in the last few minutes of baking so they don’t burn.

Baking times will vary based on what size pans you’re using. I baked the mini banana muffins for about 9 minutes and the full size for 15 minutes. Bake until they’re done. Watch your muffins, not the clock. They’re done when a toothpick inserted in the center comes out clean or with a few moist crumbs and they’re domed and springy to the touch (they’ll be more pale than golden).

Vegan Chocolate Chip Mini Muffins — The muffins are soft, springy, bouncy like little trampolines, and they’re vegan. They’re ridiculously moist, tender, delicate and light, without being airy, and as good as any traditional muffin with eggs and butter. 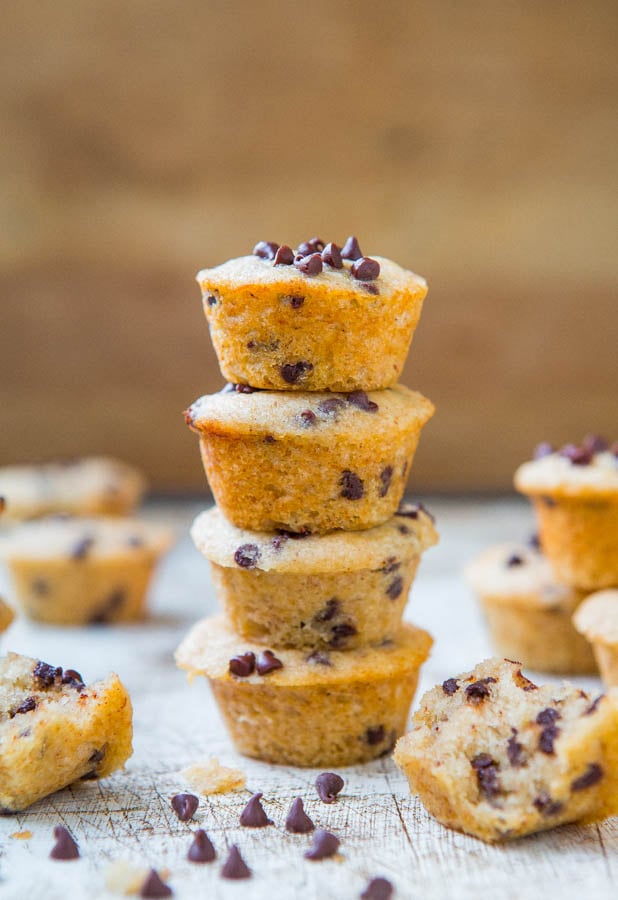 Vegan Oatmeal Chocolate Chip Trail Mix Muffins — They’re hearty, sweet enough without being too sweet, and full of tons of chewy texture in every bite from the raisins and oats. 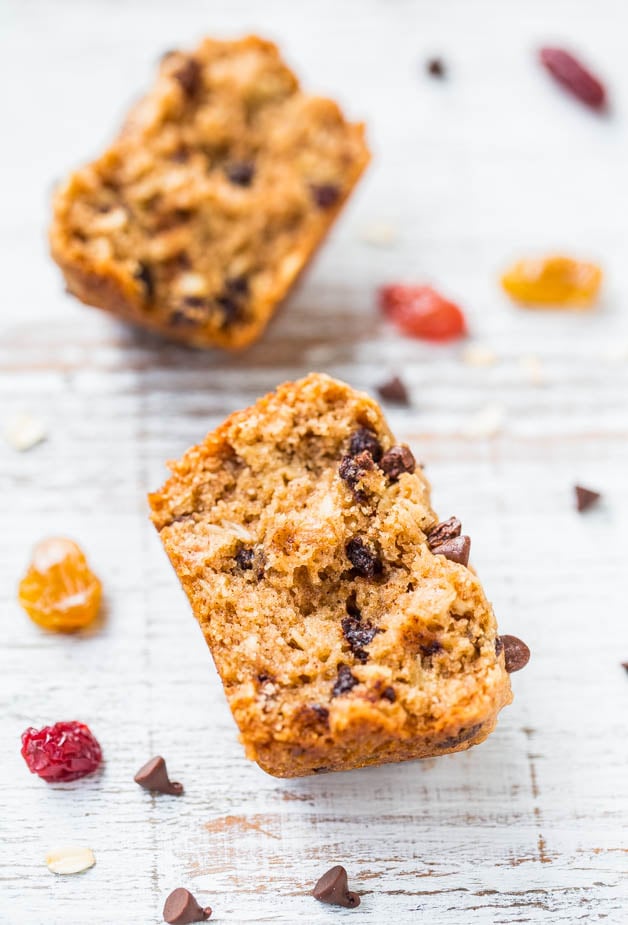 Skinny Vegan Chocolate Chip Muffins — Fast, EASY, one bowl, no mixer muffins that are on the SKINNIER side!! Loaded with CHOCOLATE in every bite! Soft, fluffy, and deliciously decadent tasting!! 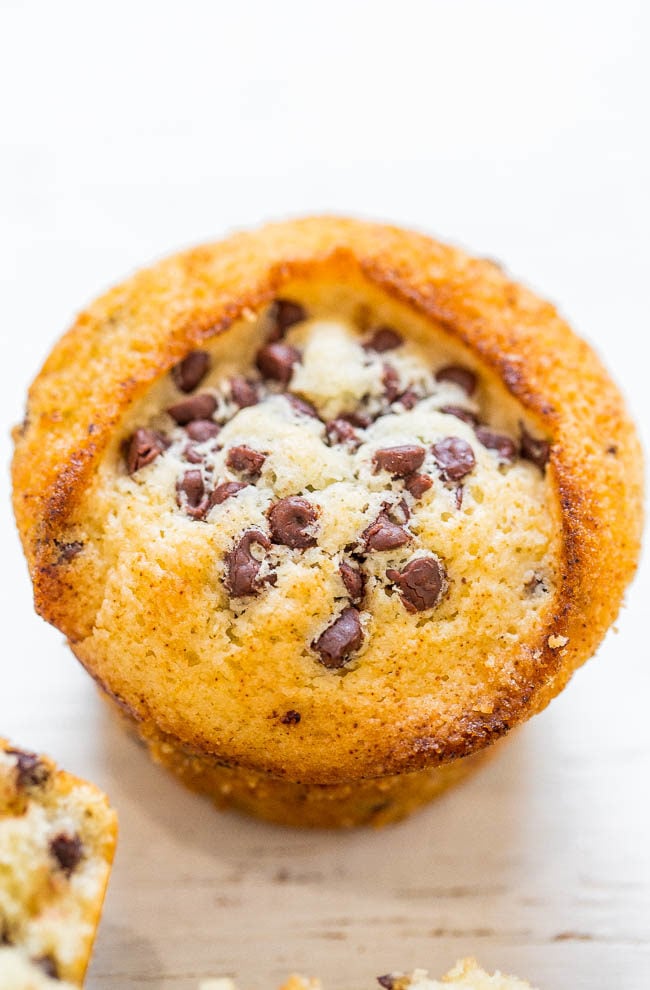 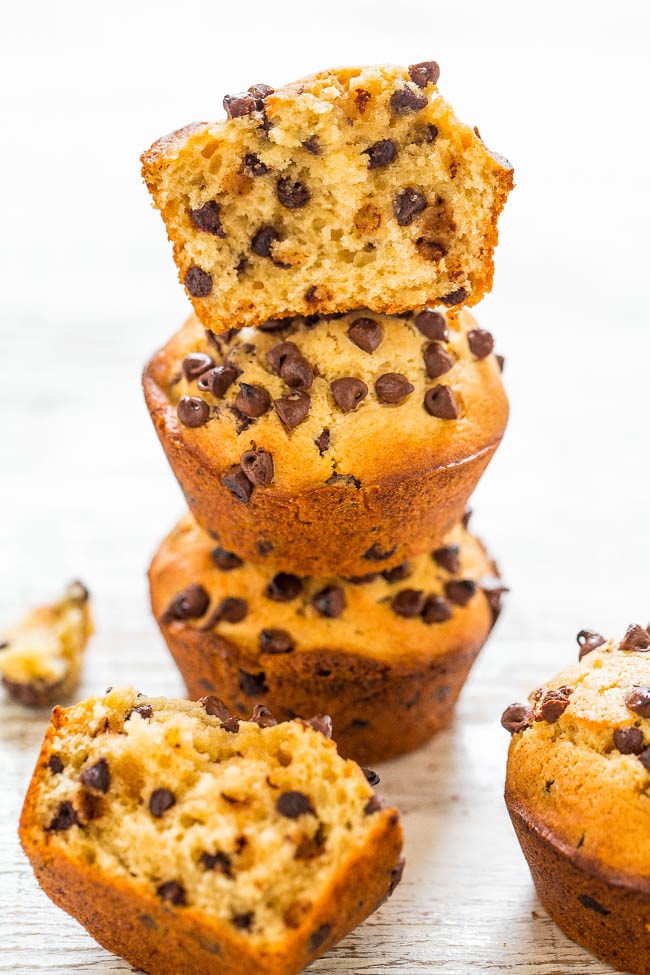 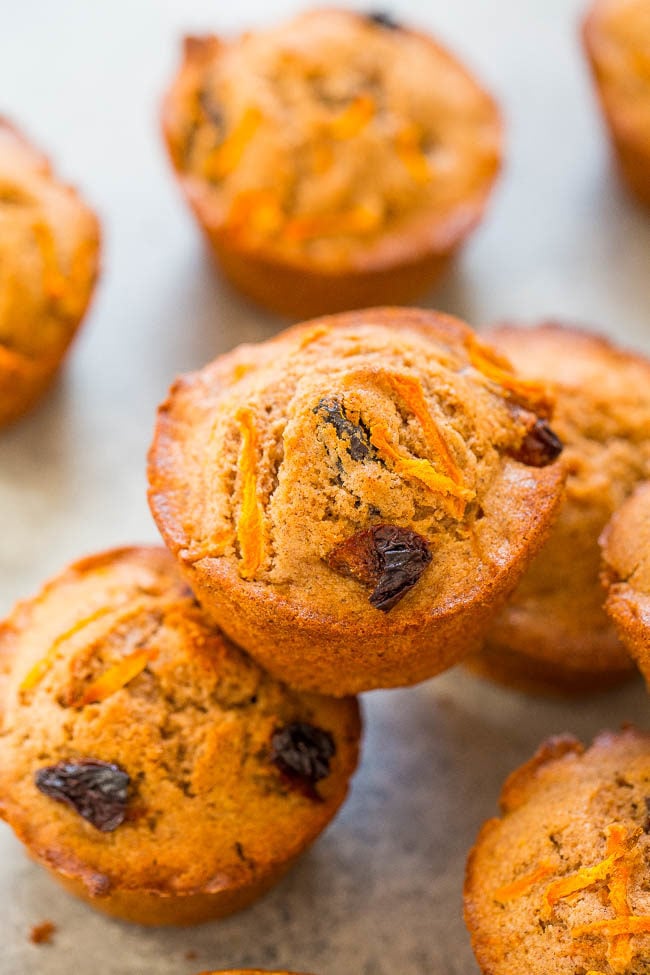 Vegan Blueberry Muffins — These are the BEST blueberry muffins I’ve ever had, vegan or otherwise. An avocado replaces the butter (and much of the oil) you’d typically add to muffin batter. These are fluffy, moist, and so easy to make! 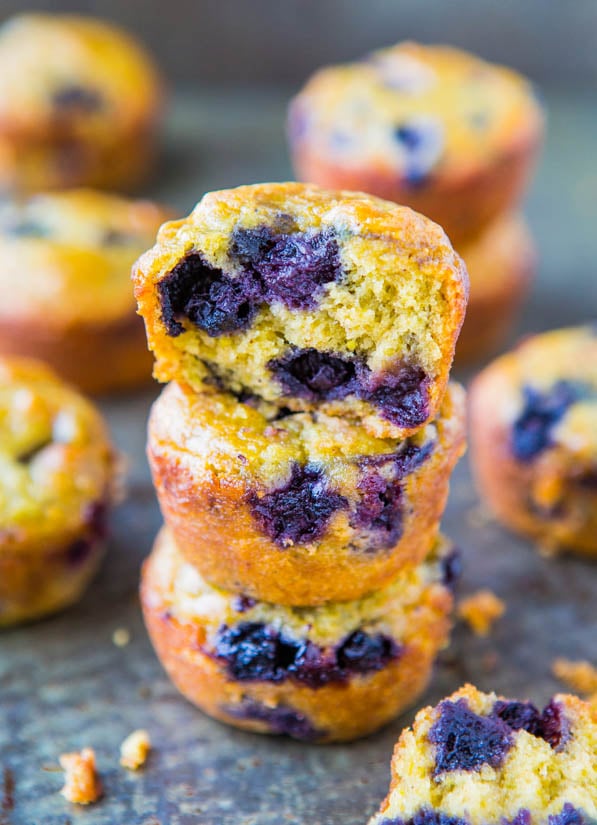 Vegan Apple Cinnamon Muffins— These apple cinnamon muffins are studded with BIG chunks of apple! They’re so easy to make and are perfect for a quick snack or breakfast to-go. 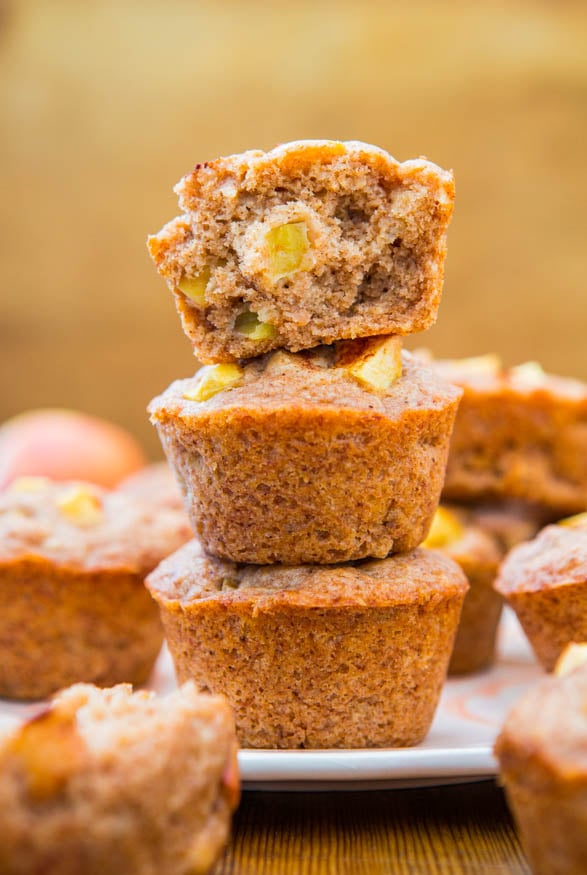