Have you ever had fudge ripple ice cream? Creamy vanilla ice cream with ripples of fudge running through it.

These easy and decadent brownies take fudge ripple to a whole new level.

An ultra fudgy decadent brownie layer is topped with a cream cheese, white chocolate pudding, and a whipped topping mixture. It’s the ultimate white frosting for brownies, trust me!

To finish things off, there’s chocolate sauce swirled on top. Or should I say rippled throughout.

The brownies are decadently chocolaty and the cream cheese frosting is the perfect creamy balance. When you initially pour it over the brownie layer it will seem on the runny side but after a few hours in the fridge, it sets up — not super firm but firm enough that the brownies slice nicely. 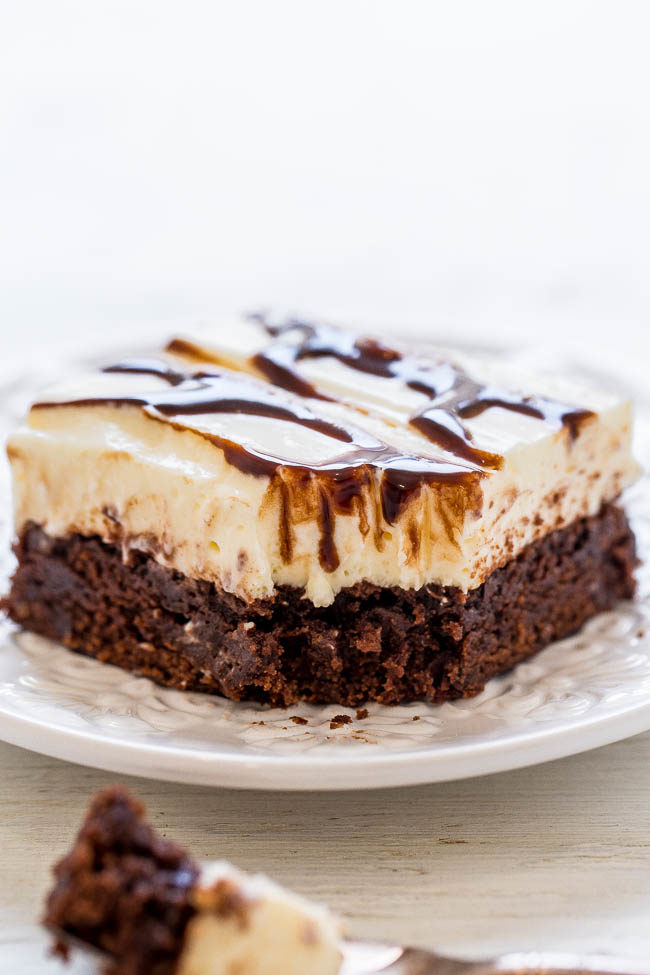 What’s in the Brownies with Cream Cheese Frosting?

To make the brownies and the white brownie frosting, you’ll need:

How to Make Brownies with Cream Cheese Frosting

If you’ve been on the hunt for more box brownie hacks, pay attention! This recipe uses a box brownie mix as its base, but it gets doctored up so much that by the end the brownies taste homemade! 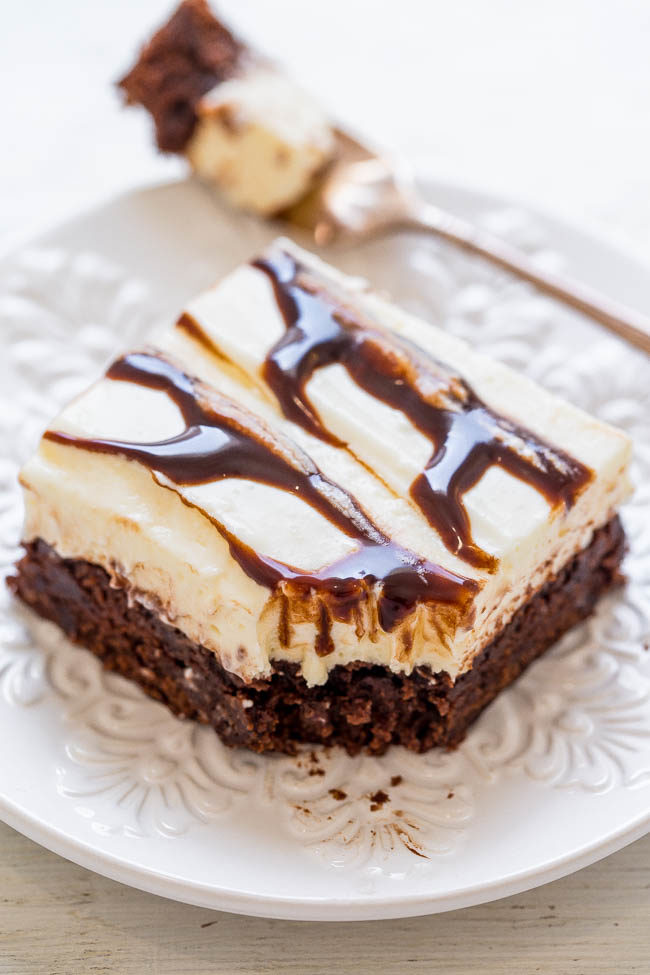 Do I Have to Use Box Brownies?

No! For the brownies, feel free to use a boxed mix or double the brownie portion of this recipe if you’re feeling the scratch brownie love.

Can the Pudding Mix Be Omitted?

If you don’t have pudding mix in your area, sorry that I’m not sure what to tell you to use as a substitute.

Can I Use Another Flavor of Pudding Mix?

If you can’t find white chocolate instant pudding mix, substitute with vanilla or even cheesecake flavor.

Can I Use Sugar-Free Pudding Mix?

I have not made this recipe using sugar-free pudding mix. Sometimes that doesn’t set as well and my instinct tells me to avoid sugar-free, but I haven’t tested it.

When baking the brownies, I prefer to err on the side of underdone. The brownies will set up as they cool, and I like my brownies ultra fudgy.

Let the brownies cool completely before topping with the cream cheese frosting. They’ll then need to chill in the fridge for about 4 hours before they can be sliced.

Don’t worry about your pattern-making skills with the chocolate sauce. Just drizzle a little chocolate sauce over the top surface and then run a butter knife though it and make your ripples.

Brownies will keep airtight in the fridge for up to 5 days.

The 15 Best Brownie Recipes — The BEST 15 scratch brownie recipes that are FAST, EASY, and decadent!! If you LOVE super fudgy, rich brownies and are a chocaholic, SAVE these recipes!