I thought I’d give you a little afternoon delight.  A Blondie Macaroon Delight that is.  Glad you were enjoyin’ the Thai-Inspired Homemade Peanut Sauce from earlier today. But these mack-a-rooney’s are where it’s at right now.

I was feelin’ like whippin’ up something yesterday while Skylar was napping and since I can’t run the VitaNoiseBox while she naps, it had to be something I could stir quickly-n-quietly.  Think mouse-like.  So after a quick peruse of RFRW, I decided to tweak up Sarma-n-Matthew’s recipe a little for my own Blondies.

Into a bowl went coconut, maple syrup, vanilla, and 2 other secret ingredients.  Any guesses as to what they are?  I may or may not tell you, because I’m evil that way. 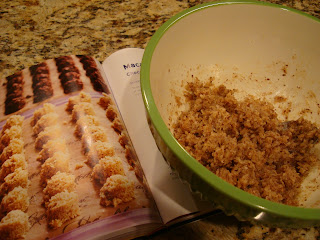 Then, I put 16 pretty little balls of coconut fat onto my Magic Box screens and popped ’em in at 6:30pm. 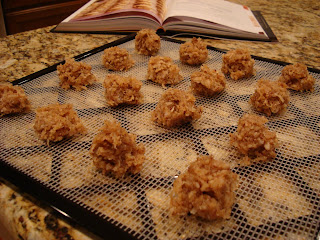 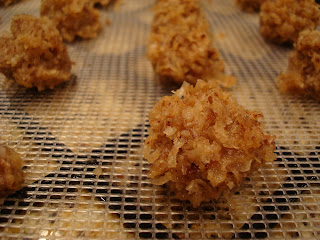 And 6 hours later I fethched them.   For those that are doin’ the math, it’s about 12:30am at this point.  I cooked the Macks about 15 degrees hotter in the Excal than Sarma & Mathew recommended but things totally worked beautifully up in here. 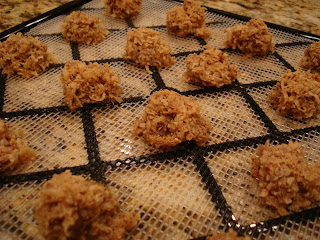 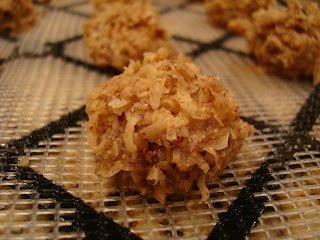 As a sidebar I think that you could totally do this recipe in a low oven for an hour, give or take, watch ’em like a hawk so they don’t burn.  But there ya have, a recipe where no VitaGod and no Magic Box would be needed.

Two other Huge Notes-To-Self…or to You.  Boy, I have just saved your bootay with these tips.  Pay attention.
1. It is cruel and unusual punishment to have the scent of vanilla & coconut wafting through your house for hours.  Over the pre-dinner, dinner, dessert, and midnight snack hours just makes it even more like ridic.  Bake these when you’re not already hungry or if you are dehydrating them, try either when you’re leavin’ the crib or sleepin’.  The smell is like living in CandyLand for hours.  Insane!

2. After staying up waiting for these badboys to be done, I went to the magic box just before 1am only to find that the Blondies had dripped a mixture of coconut jizz-n-grease congealed with maple syrup all over every single dehydrator rack and screen.   Lucky for me, I had cooked them on the 2nd to the highest shelf.  So I only had a mere 8 screens and 8 racks to wash.  At 1am.  So ’bout 1:45am I that was done and I got into beddie.  Use parchment paper to line your trays and cook them on the lowest rack so in case their is drippage, you ain’t cleanin’ 7 freakin racks!!!!!!! 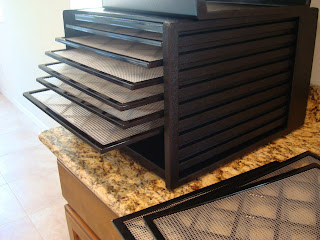 However, the net result is soooo worth it.  Ever so slightly crunchy on the outside, totally gooey and decadent on the inside.  And the smell.  Heaven on earth, or in my case, in my kitch. 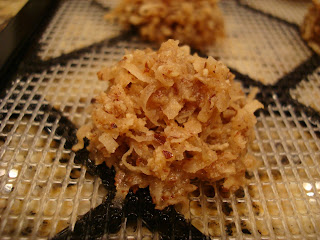 See you in the a.m. kiddies with a weekend recap….

But before I go, tell me what you did this weekend that was super fun-n-cool and made you happpppy!

Oh and would there possibly be any interest in a contest to win some of these Blondies?  Let me know and I just may be able to hook that up…