Happy Monday Morning!  Blech….who likes Mondays?  Generally they’re not my fave day but Scott comes home late tonight after a work trip, but unfortunately he has to leave again Wednesday.  So we only have a few short hours together.  Sigh….But hey it’s quality, not quantity, right?

Sounds like my Vegan Chocolate-Coconut-Chia Treats from yesterday hit the spot.  Yay for that!  I hope all you recipe tweakers whip em up, with your own flava and style!

Here’s a recap of some of the weekend eats...meals and days are blending together in my less than stellar memory banks…

I made this banana oatmeal (1/2 c dry oatmeal and 1 mashed banana soaked overnight in 2/3 c lowfat vanilla almond milk), cooked, and then stirred in cinny & brown shug, and topped with raisins and TJ’s Sunflower Seed Buttah….I know my homegirls Deb, PBJenny, and VeggieChica are all fans of the Sunny B.  Hope you likey.  Scott did. 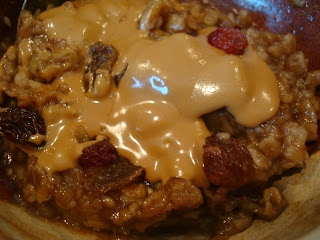 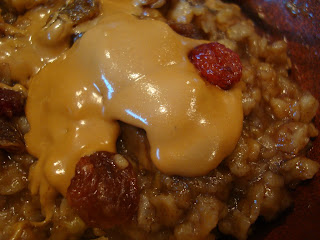 Also picked up some grapes from TJ’s.  I haven’t had grapes in awhile and these were juicy and crunchy, and not semi-mushy or thick-skinned where the skin is still on your tongue long after the grape flesh has been swallowed?  Yeah, ewww.  But these were good.  Especially in the freezer for a half hour. 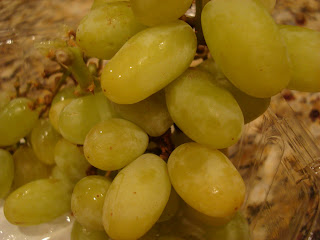 I have been partaking in brekkie cookies pretty much daily, thanks to the Fitnessista for her revolutionary idea.  I continue to give her big props for her yummy discovery!  In this cookie, there was 1 pretty ripe nanna, heaping 1/3 c oats, 1 scoop Sun Warrior Vanilla BRPP, drizzle of agave, and a sprinkle of NuNaturals stevia, and a couple drops of NuNaturals Vanilla stevia….that vanilla stevia stuff rocks my tastebuds in case you’ve missed my rave review of that product!  Go win some here.

Here’s before I put it in the fridge…. 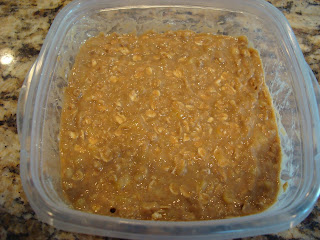 …And here was the result 24 hours later.  Turned out to be quite a juicy cookie.  I think it was the uber ripe nanner I used.  No worries, very tasty all the same. 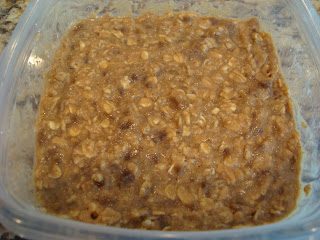 And then I topped the brekkie cookie with some ‘o those grapes & wawa-melon.   Juicy again! 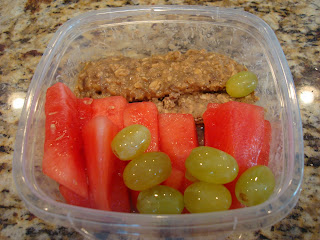 Moving right along to some raw veggies & greenery.  One of the salad combos was a variation on the Cauliflower with Orange Viniagrette I made the other night.  This one had cauli, zukes & cukes, carrots, yellow & orange pepps, handful of greens, dressed with the orange viniagrette dressing.  Tasty! 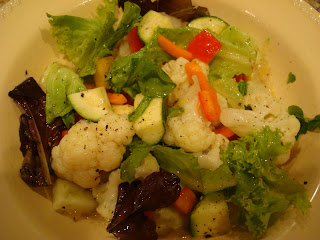 And then I had my veggies all lined up and ready to go for eatin’ time.  I am a big believe in planning ahead and chopping, spiralizing, and getting organized in advance so when it’s time to eat, I can just eat and not have to do all the prepwork at that time.  Plus, with a kidlet, it’s not even an option not to be prepared.  1 zuke spiralized, cukes, the zuke schlong remnant chopped, orange, red, & yellow pepps. 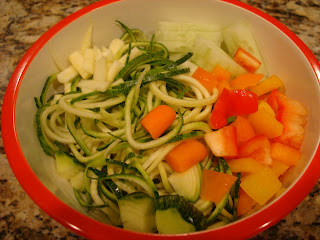 And I got with the program and made a larger batch of the Peanut Sauce….Off the Chain!
2+ heaping Tbsp P.B.
2 Tbsp Raw ACV
2 Tbsp Agave
1 Tbsp Maple Syrup
1/2+ Tsp Ground Ginger powder
Twisty of Cracky Blacky
Blend ‘er up in VitaLove
Store extra for later.  In case I get thirsty and need a drink, I’ve always got this to sip. 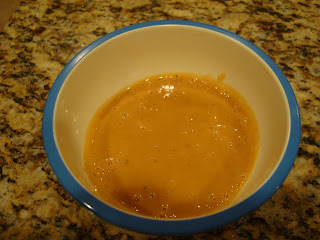 In this spiralized delight, there were raw zuke noods, lightly steamed cauli, red & orange pepps, cukes, carrots, and some zuke schlong remnant.  And everything was drowned in that peanut sauce.  Slurp, slurp. 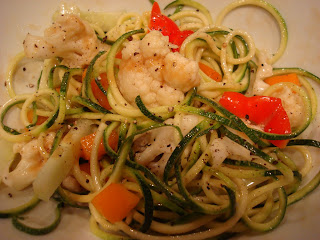 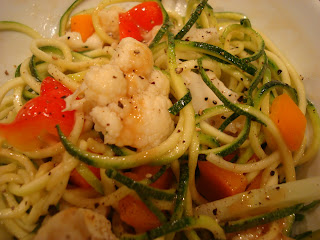 The raw vegan chocolate brownies have resurfaced.  In case you missed it, you can check here or here for the blow by blow instructions.  Medjools, cocoa powder, walnuts, agave and vanillla.  Really, you can’t go wrong. 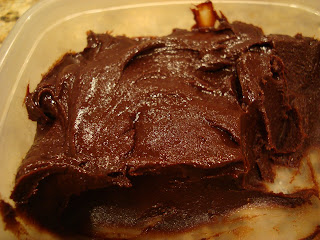 I’ve been tokin’ on some midnight chocolate lovin’.  I need someone to love me when Scott’s gone. 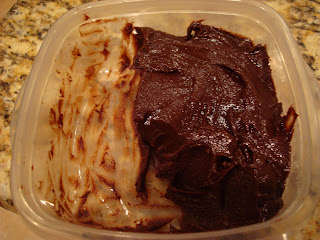 Remember a week or so ago me asking what everyone’s favorite knife was?  Well, there were no clearcut winners and as I was in Bed, Bath, & Beyond (my second home since moving to Phoenix), I decided to pick up a 7 inch Henckle’s Santoku.  I guess it’s what all the cool kid chefs on Food Network use.  I wouldn’t know…since I have a blogaddiction and seem to be doing more blog surfing than channel surfing lately.

Zesty just did a knife review in case you wanna check that out.  I already have the knives he recommends, though…

I dunno, for a high raw all vegan diet, I need something that’s a macked out chop-chop knife more than a slicer.  And bread?  What’s that?  I’m gluten, soy, and dairy free.  No bread knives in this crib.  I saved my receipt and the BB & Beyond people said I can return the knife if I don’t like it.  With my 20% off coupon, if it becomes my go-to knife, it was well worth it.  I like it so far, but not sure I love it…

Here’s the weapon I scored. 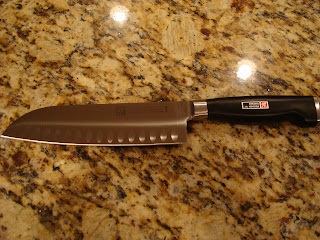 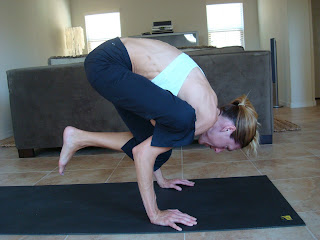 You can see my right leg is laying across my arms better from this angle, but you can’t see the back foot up as well as you can in the first pic.  I need aerial photography.  That and a new Louis Vuitton bag and I’d be all set. 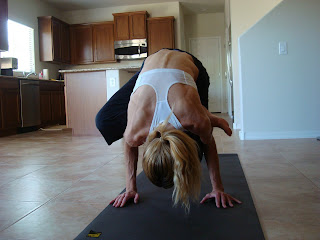 Now for my musings…I normally don’t go real deep on this blog, anything past zuke schlongs and corny jokes hasn’t been my scene ’round here, but wanted to let you all know, some of these poses are a culmination of a daily practice for nearly 10 years.

These are not overnight successes and I do get private emails and comments from readers wanting to do them…tomorrow.  Unless you’re employed by Cirque du Soleil, some of these yoga poses are gonna take a smidge of time, patience, and practice to master.  And by no means, do I have it all mastered, not trying to imply that at all!  But I just wanna urge everyone to take it slow, don’t get injured, let it all unfold at your pace, respect your body, respect your soul, and respect where you are today…with everything.  Not just your yoga.  Because, after all, that’s what yoga is for me….an acceptance of where you’re at today combined with a sense of gentleness and ahimsa (non-harming) attitude.

I think that when we least feel like practicing gentleness and kindness to ourselves, that’s probably when we need it the most.  Same with parenting, when we least want to hug our kid, that’s when they need a hug the most.

What do you do to be gentle and kind to yourself?  Or is this hard for you, and you’re a ram-n-cram it type or a Just Do It No Matter What Type A style?  I am trying so hard to let go of those mentalities, but it’s truly a journey.  That’s where I ask the universe for compassion, not only to others, but to myself.  Love Thy Self, peeps.

Before I get too hippy dippy, we’ll just leave it there.  Love to ya all, Namaste!

Tip of the Day:  My Chia GiveAway and the NuNaturals GiveAway!!   Hurry, the chia seed giveaway is ending Wednesday!!!  Please tell your friends, post the giveaways on your blogs, show the love and spread the happy giveaway word!  Thanks everyone!!