Before we left San Diego for Aruba, I had some eggnog to use.

It would have been a shame to toss out $1.17 worth of eggnog when I could embark on a recipe development, baking, and photography project just hours before a 22 hour travel day.

Because I had nothing else going on. 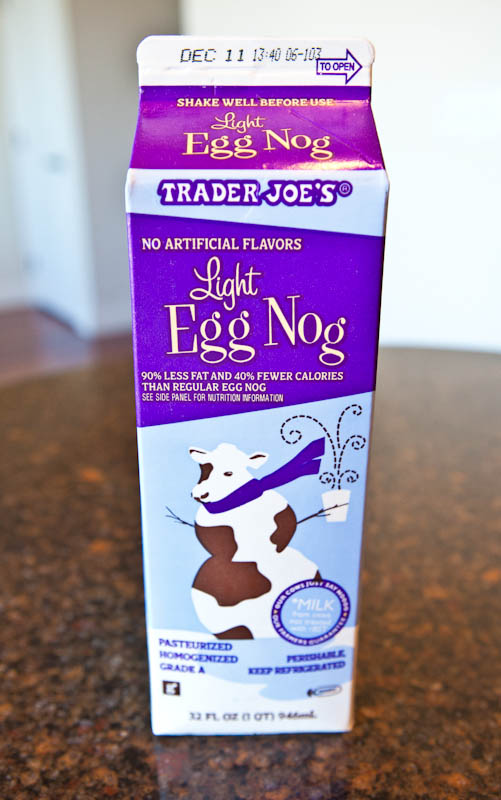 I’m happy I used up the rest of the ‘nog because these vanilla eggnog donuts were tasty and seasonal.

Nothing says holiday baking like eggnog, in donut form. 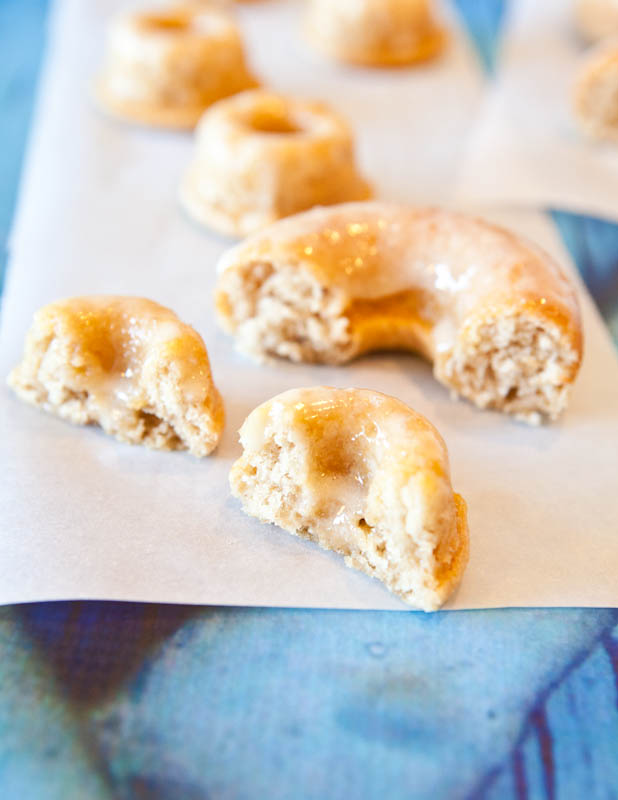 I broke in my new mini donut pan by making a dozen mini donuts and the remaining batter provided enough for four larger donuts.  My verdict on the mini donut pan is it sure makes cute donuts but they are much more of a PITA to make than regular donuts.

I probably won’t make as many mini donuts as I will full-sized donuts but now I have two donut pans for those times when I have just a smidge extra batter and don’t want to toss it or wait to for the one and only pan to come out of the oven. 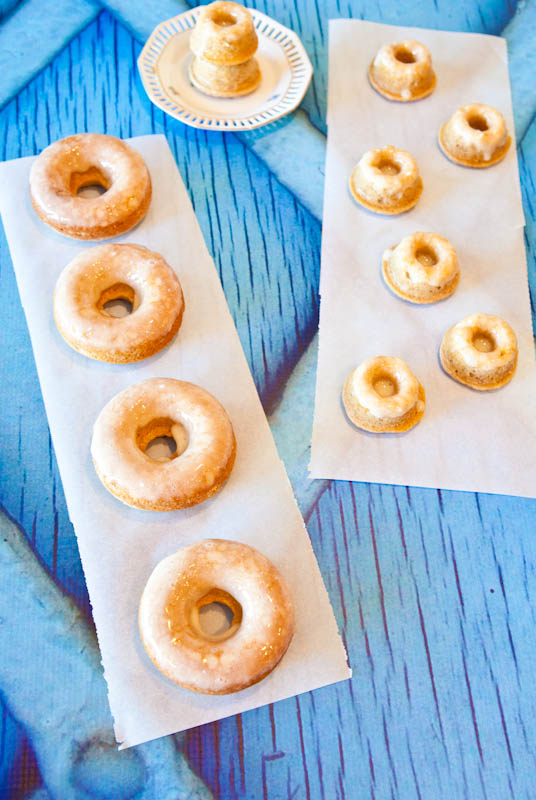 These little guys hit the spot both at home and as travel snacks in the airports. 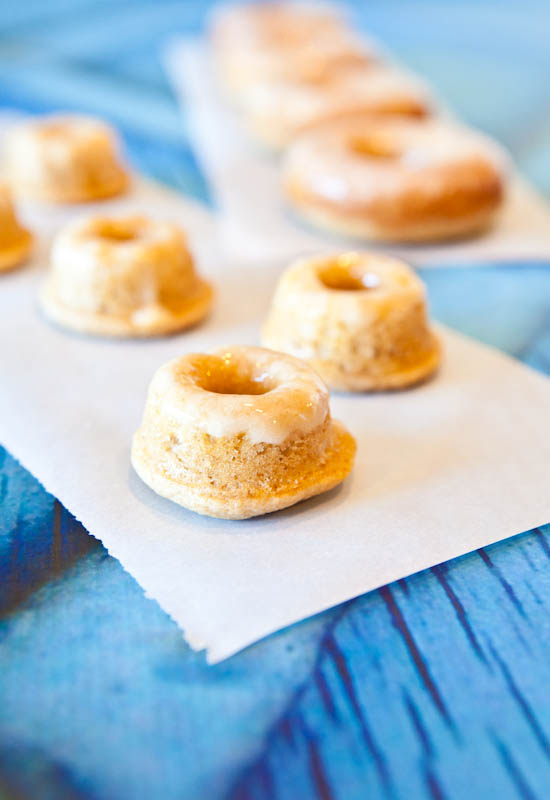 The glaze made things a little sticky, but I’d much rather have one of these despite a few sticky fingers rather than a bag of stale airline pretzels. 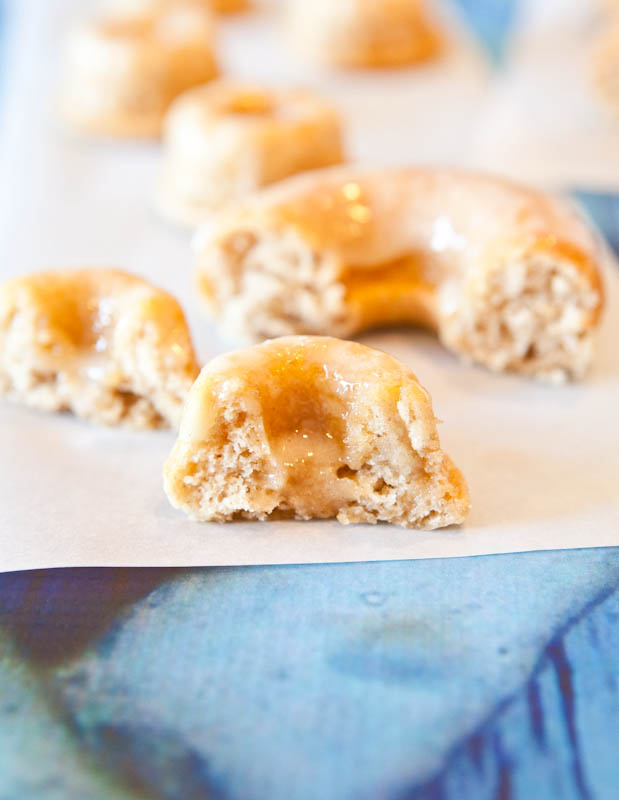 Nothing a few wet-wipes can’t remedy.

Ingredients for the Donuts

1 egg (or flax/chia egg or other egg replacer)

3/4 c + all-purpose flour  (Note: depending on the type of eggnog used, you may need to add more flour.  Batter should be fairly thick.  Thicker than pancake or waffle batter, not as thick as cookie dough.  Add enough flour to get a fairly thick batter, possibly 1/4 c more.  I used nearly 1 c flour because my eggnog was on the thinner/runnier side.)

Notes: If you have an extra bit of batter, rather than waiting for one donut pan to come out of the oven, make a few small muffins in a muffin pan with it, about 16-19 minutes for the muffins to cook through.

Or simply make muffins rather than donuts if you don’t have a donut pan.

Directions for the Donuts

Pre-heat oven to 325F and cooking-spray or grease the donut pan (or muffin tin).  Spray it down very well.

In a microwave safe bowl, melt the butter and to it add the sugars and egg and stir by hand for about 1 minute or until creamy (or use a mixer but I did it by hand)

To the bowl, add the remaining ingredients and stir to combine.  Do not over-mix as that increases the likelihood of tough donuts.

Use a pastry bag fitted with a large round tip (or a Ziploc bag with a corner cut off) to pipe the batter into donut pan(s).  Or just be extra neat and do this with a spoon which is what I did.  Do not overfill the cavities especially if making mini donuts.

Bake 9-11 minutes in the preheated oven if making larger donuts or about 5-7 minutes if making mini-donuts.  Bake until donuts spring back when touched or until dough is set.  Donuts should be springy and may not be golden brown in color so don’t necessarily judge doneness by color; judge by texture. (I prefer to underbake my baked goods but in my oven these took about 10 minutes to set up for the larger donuts and about 6 minutes for the mini donuts)

Ingredients for the Rum Eggnog Glaze (Rum Optional, but encouraged) – Or try this vanilla glaze or this cream cheese glaze

Directions for the Glaze

While donuts are baking or cooling, make the frosting by combining all ingredients and whisking or stirring, until desired consistency is achieved.

Frost the donuts after they have cooled (you can do it hot but the frosting will run; that’s okay too)

Add a final dusting of coconut flakes, orange zest, cinnamon-sugar mixture; sprinkles, or other extras at the end, as desired.

I didn’t make these with the rum glaze because I knew a certain 4 year old would be going to town on them.  The rum glaze would have added just a certain somethin’ somethin’ to them. 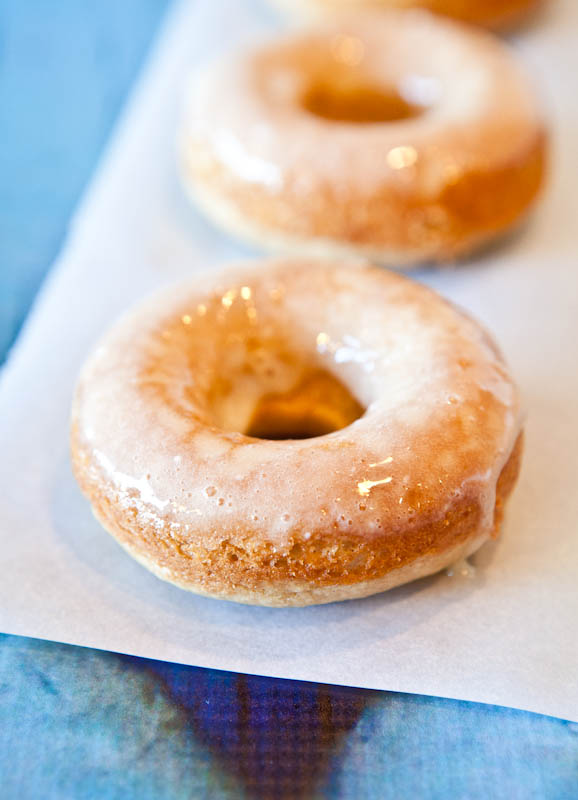 And it probably would have helped ease the pain of a long travel journey for mommy.

These were moist and were a nice travel treat.  You know, that snack you have in your carry-on bag that simply knowing you have it in there and can dive in once you’re settled at the gate makes full-on frontal pat-downs by TSA a little less uncomfortable.

And yes, that really happened with about 20 male TSA screeners watching as a female TSA agent frisked me.  Up and down.  She didn’t miss a spot.   I was going to ask her if she wanted to check for donut crumbs inside my sports bra, too, but figured my humor may not go over so well. 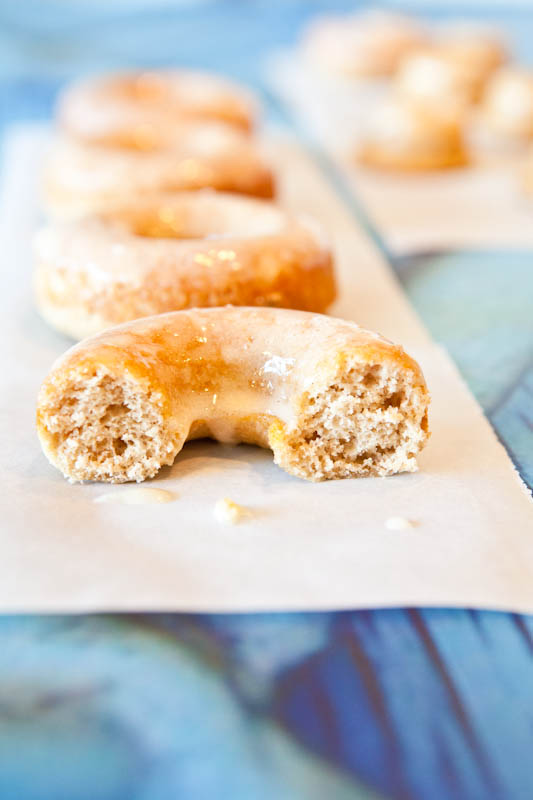 Even if you don’t “love” eggnog, that’s okay because the eggnog taste is present but not overpowering. 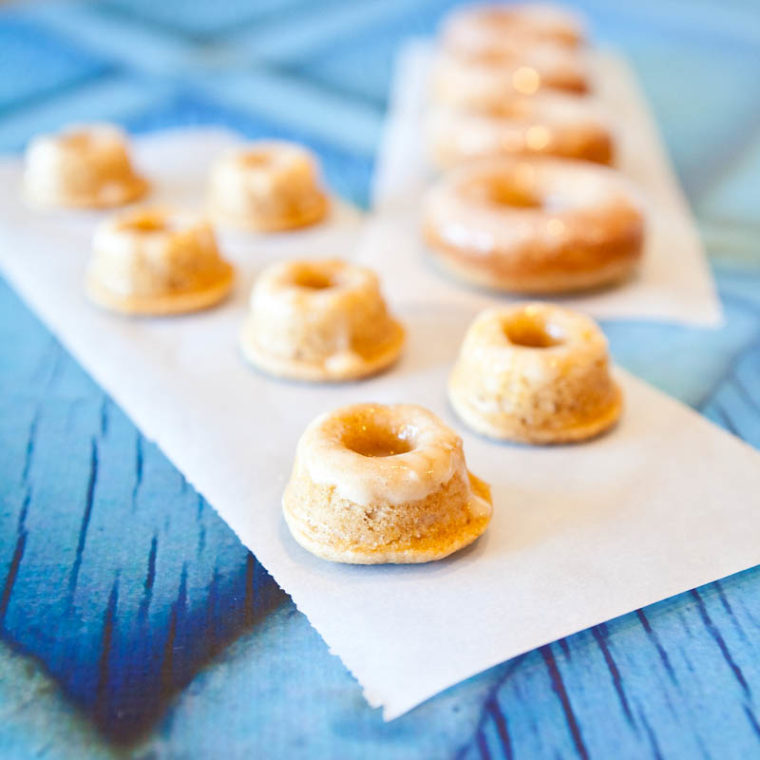 There is nearly as much vanilla flavor as there is eggnog flavor.

Essentially a vanilla donut that’s been taken to the next level without being over the top. 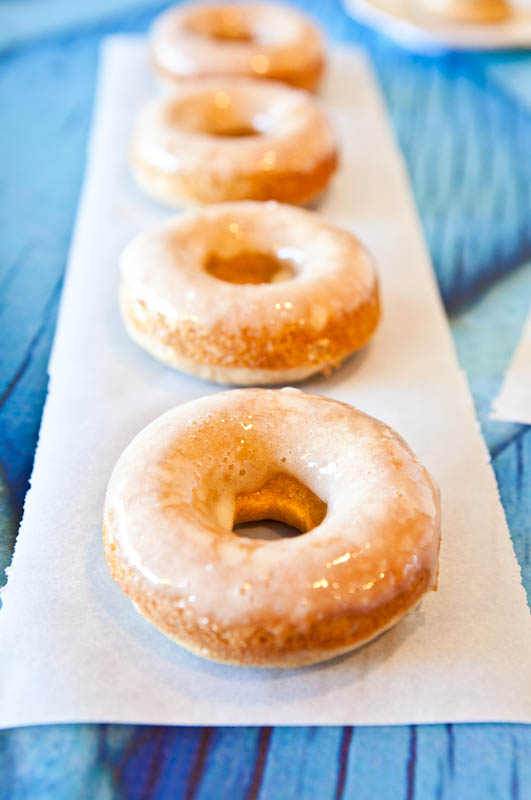 If you want over the top, then wash these down with some actual eggnog.

Or with an Eggnog Chai Smoothie. 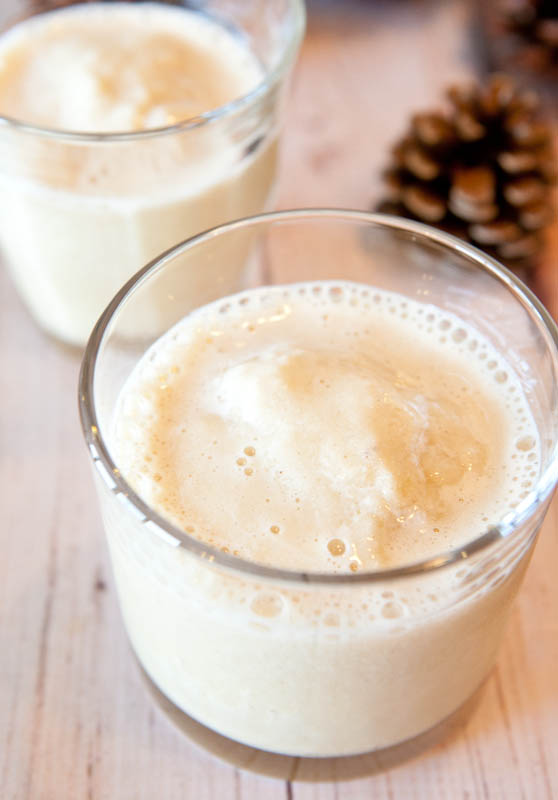 Or just lick the bowl with the eggnog glaze.  I did.

It was fantastic and got my travel day started off in prime form.

And these helped kick off, err continue, my holiday baking season. 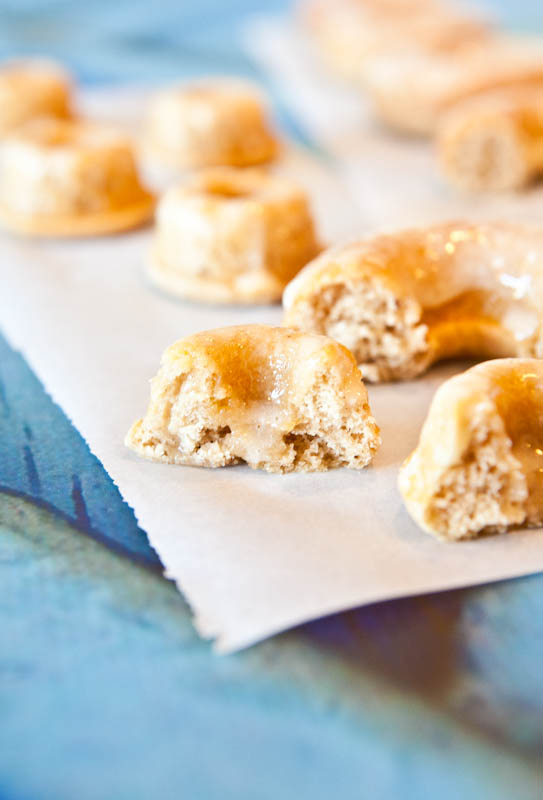 I have so much on mine.

Have you seen my 12 Bars of Christmas recipes post?  I want to make at least 3 or 4 pans of those bars.

And I also have a Pinterest addiction that fuels my baking fire.  The more I read, the more I want to make and bake!

It’s been cloudy and rainy our first 36 hours in Aruba, and I took full advantage of the dreary weather and stayed inside and baked.  Scott went to a sports bar and watched The Bears.  I baked.  Skylar ate sports bar food and then came home and ate baked goodies.  She got the best of both worlds I think but she runs around all day long, swimming, playing, and goofing around and she’s a bottomless pit.

P.S.  If you still haven’t gotten a donut pan, get one.  Or make any of these donuts as muffins.  But donuts are cuter.

« Previous PostHome for the Rain
Next Post » Running By