Cinnamon Roll Apple Bake — A layer of cinnamon rolls topped with apples and a crunchy oatmeal crumble makes this the ULTIMATE apple crisp!! EASY, ready in 40 minutes, and tastes AMAZING!! 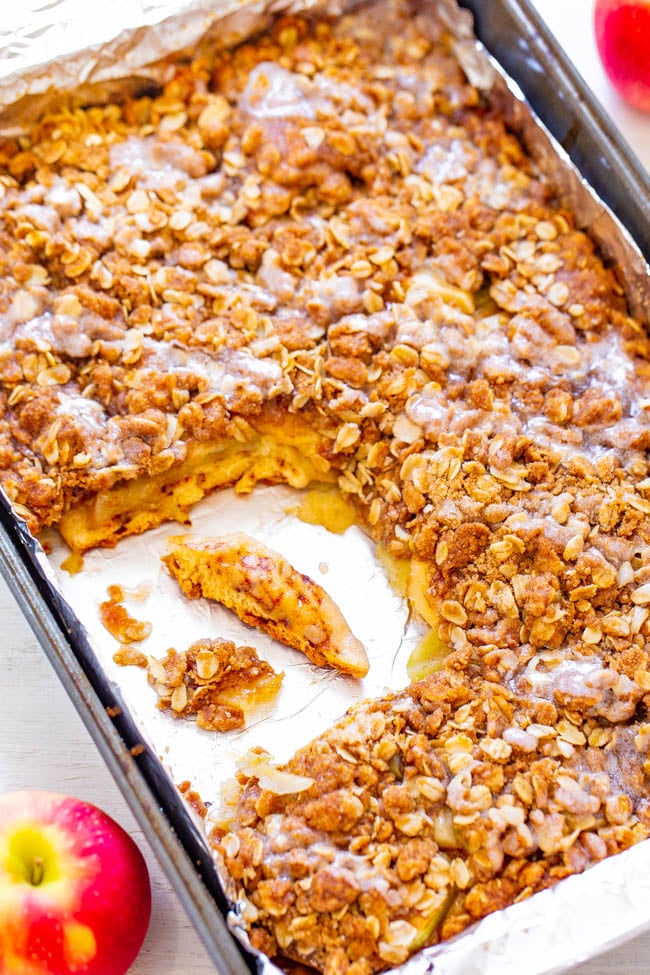 I love crisps and crumbles of all kinds, but apple crisp in particular is always a nostalgic favorite. This apple crisp dessert combines the tried and true flavors of apple crisp — including juicy apples spiced with cinnamon and sugar and topped with a crumble topping — with a special twist.

Crumble toppings are where it’s at for me. Truthfully, after I got done photographing this, I may have used a spoon to scoop off the crumble topping in a portion of this pan. It was a little bald in places, no biggie.

I cannot resist the crunchy-crispy factor that happens when you bake the butter, brown sugar, and oats. The contrast of the soft and juicy apples with the crumble is primo. 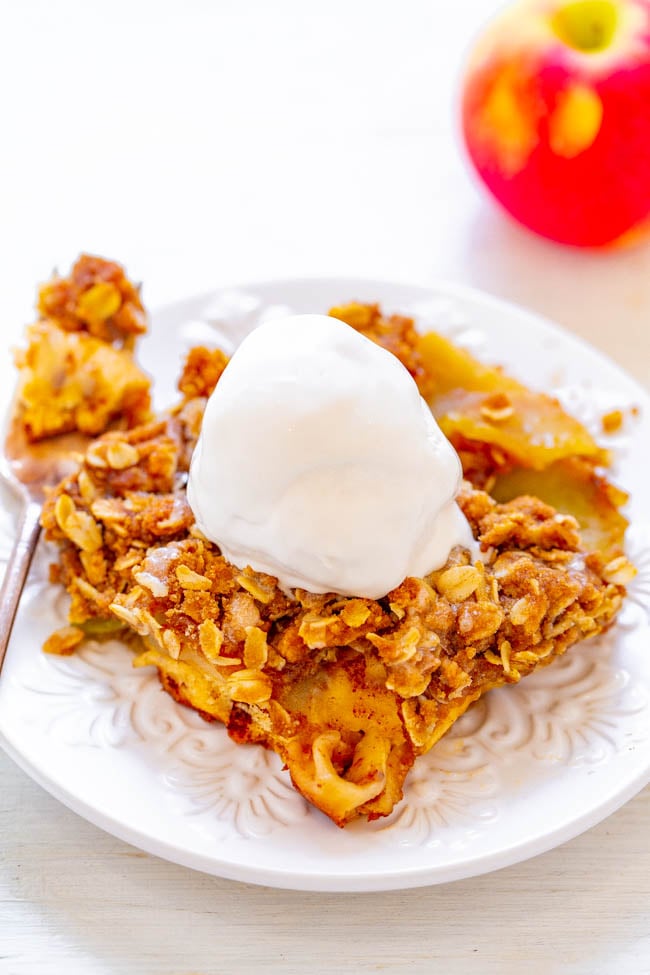 I used two Gala and two Granny Smith apples that I peeled and cut into thin slices. You could probably use whatever apples you have on hand or are your favorites.

Can I Use Quick Oats Instead of Old-Fashioned?

Make sure you use old-fashioned whole rolled oats and NOT quick cook or instant because they will not produce the correct texture for your crumble. People always write to me and ask me when it comes to oats, well can I substitute… No, you can’t. Old-fashioned only for this recipe. 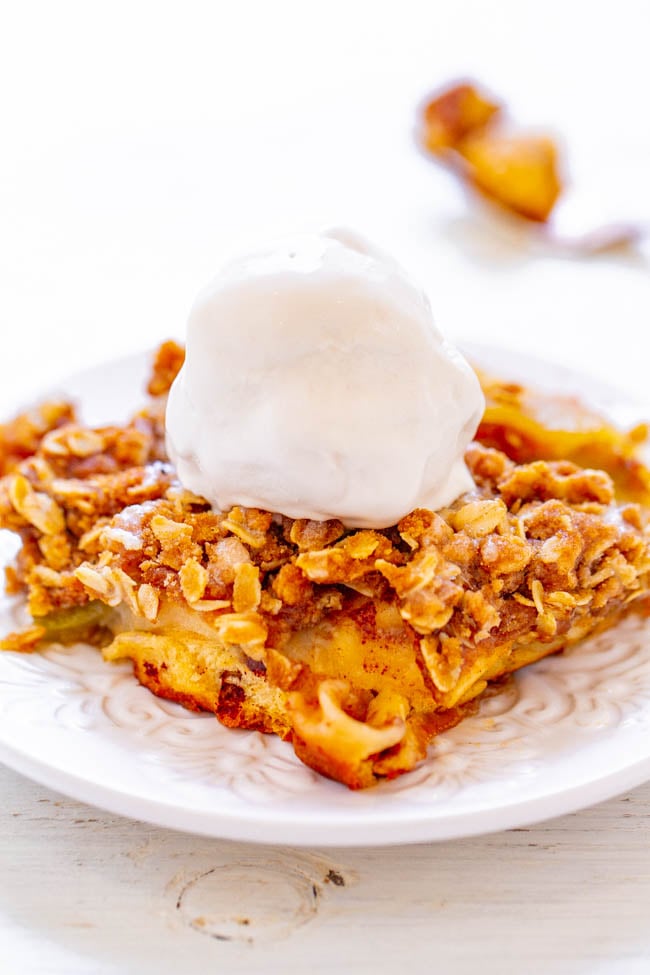 I put two rolls in each of four rows. Smoosh the rolls with your hand and this is going to become the base of your apple crisp. The rolls will not completely cover the pan but they expand when they bake.

Arrange the apple slices over the cinnamon rolls like you’re making a pie before sprinkling with cinnamon and sugar.

After baking, I simple drizzled the icing that came with the cinnamon rolls over the crumble and added a scoop of frozen coconut milk whipped topping. The contrast of the cold topping and warm apples was heavenly.

That stuff is heavenly and worth seeking out. So creamy and rich yet it’s dairy-free and vegan. This post is not sponsored by them, but this post for Homemade Caramel Macchiatos was.

Does Apple Crisp Need to Be Refrigerated?

No, this cinnamon apple crisp dessert can be stored in an airtight container at room temperature for up to 4 days.

Note that the cinnamon rolls will not completely cover the entire 9×13-inch pan when you first smush them in. That’s okay, they expand as they bake!

You’re welcome to adjust the spices in the crumble topping to suit your own tastes.

You could add regular whipped topping (frozen or thawed), vanilla ice cream, or go with homemade salted caramel sauce or your fave caramel sauce. Whatever you put on this ultimate apple crisp is just literally the icing on the cake before diving in. 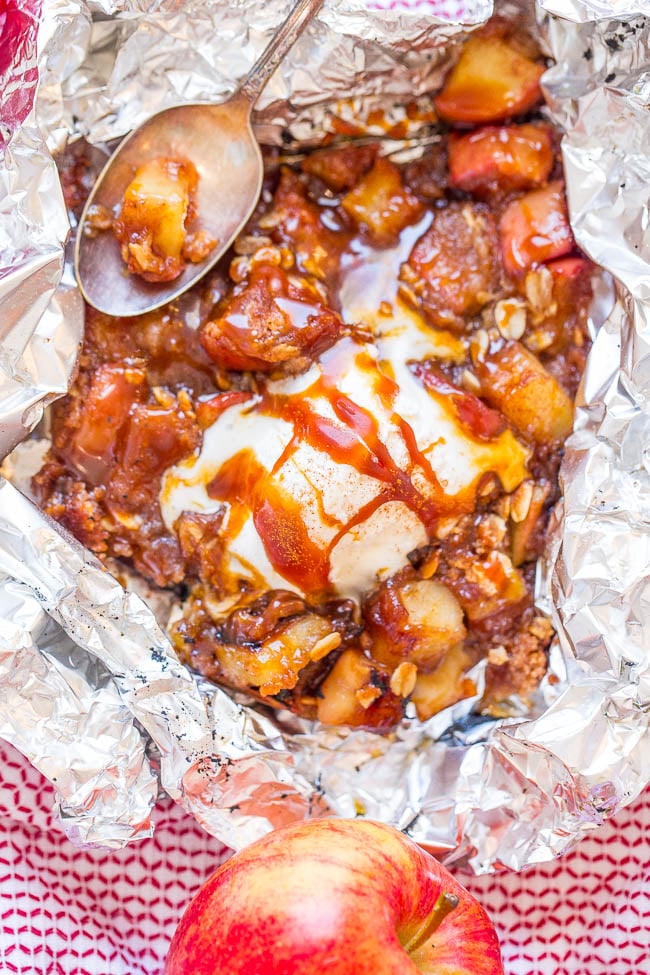 Caramel Apple Cinnamon Roll Bake – The soft and gooey factor of a Cinnabon with apples and so much caramel sauce! Easy, ready in 30 minutes, and uses storebought cinnamon roll dough to save time! One of the BEST desserts ever! 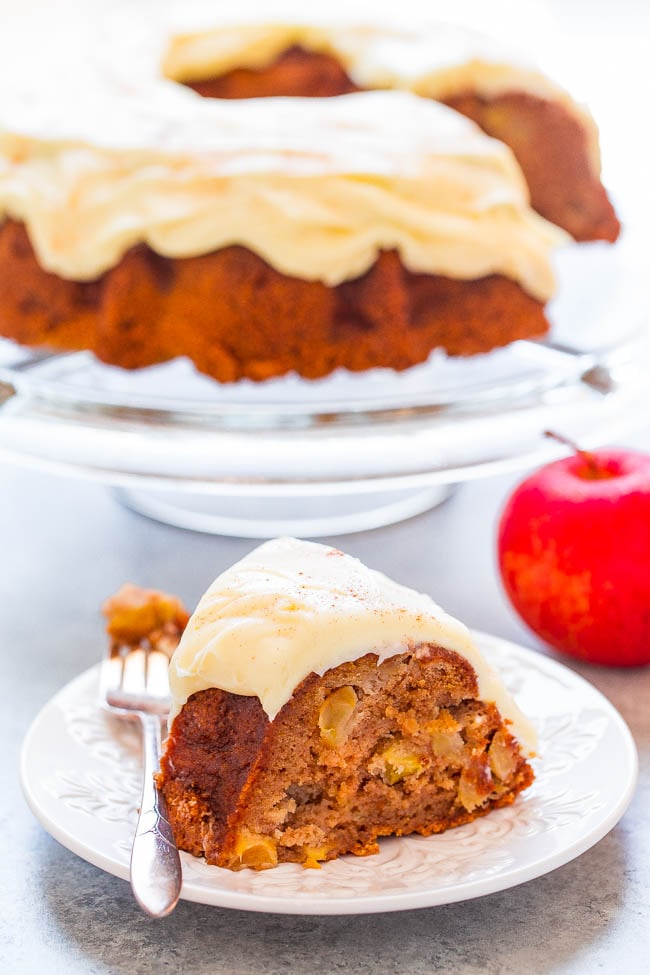