I love cinnamon rolls, but they’re a bit time consuming to make. This cinnamon coffee cake is not.

No actual cinnamon rolls are made for this coffee cake so for those of you who still have bread-with-yeast fears, you’re safe. Instead, this cake just tastes like a big warm buttery cinnamon roll, without any of the time or effort that goes into making them.

I have a fondness for streusel and crumble toppings and could make a meal with just those cinnamon and brown sugar buttery bits that always seem to be in far too short of supply. With this cake, there’s plentiful streusel, forming pits and valleys over the surface of the cake, as well as being woven throughout the interior. 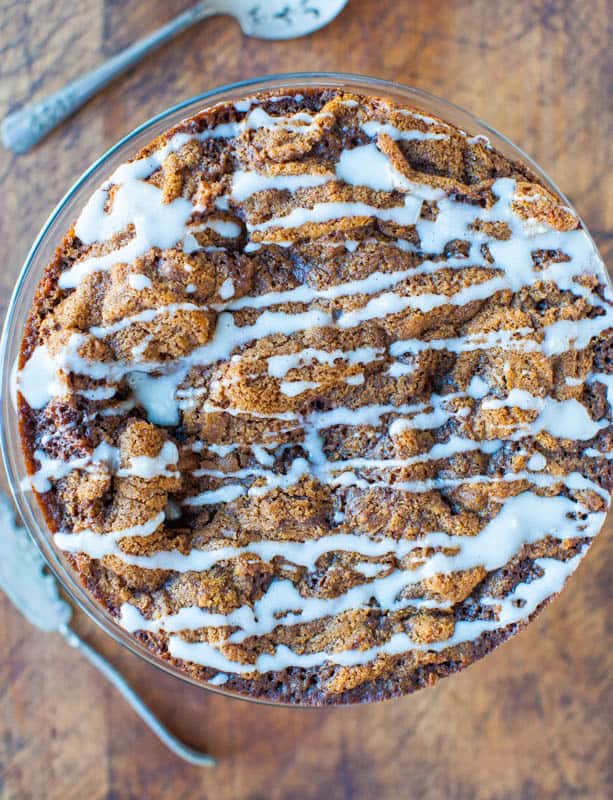 The cake tastes like a cinnamon roll, but in a cinnamon-roll-meets-cake way. Minus the effort or extended waiting period that goes into making cinnamon rolls.

It has the perfect balance of density, not too dense like a pound cake, but not too airy or light like an angel food, and it was just how I like coffee cakes. And between the sour cream, oil, and butter this cake stayed plenty moist. The butter used in both the cake batter and in the filling-topping mixture also helped to emulate the buttery, smooth, rich qualities of cinnamon rolls.

I used cinnamon twice, both in the batter as well as in the filling-topping mixture. I wanted to know I was eating a cinnamon roll or cinnamon roll-cake, operative word being cinnamon.

I am a big cinnamon fan and find most recipes to be lackluster in cinnamon oomph and and intensity. That’s not the case here and if you’re a person who blindly doubles the cinnamon in most recipes like I tend to do, taste the batter before doing so because it’s balanced, but quite well-spiced. 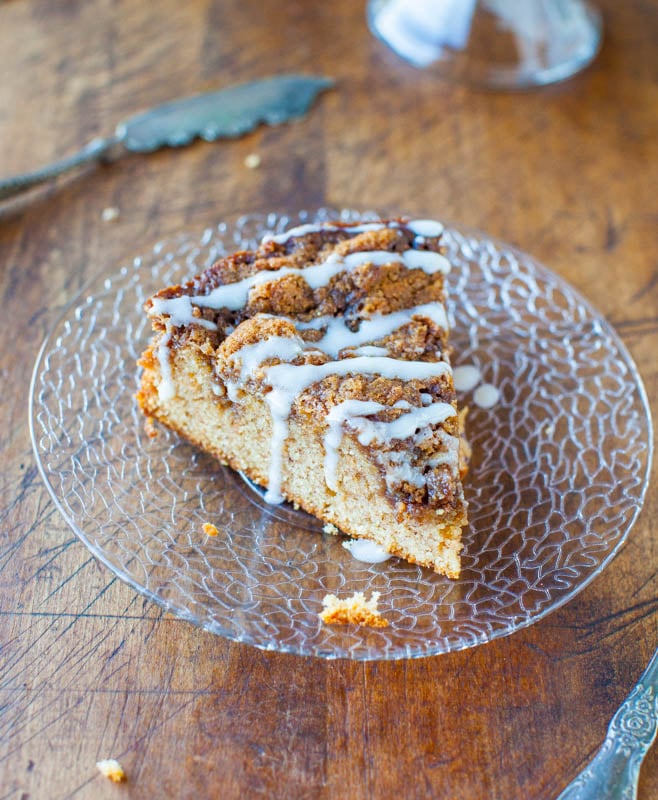 The sweet, creamy, and slightly tangy cream cheese glaze gives this version of a cinnamon roll extra authenticity. It was especially satisfying watching the glaze sink into the nooks and crannies of the slightly crunchy and irregular surface layer, knowing that some of it would penetrate into the body of the cake. Those are my favorite bites.

It would be a perfect cake to serve at a brunch, holiday party, baby or bridal shower, or any time you need a solid cake, without any solid work. The cake, from start to finish, is a one hour project, including baking time. Not too shabby.

I really enjoyed this cinnamon coffee cake, but I had no idea that my family was going to love it as much as they did. They were genuinely disappointed when it was gone. Everyone here clearly loves their cinnamon rolls. 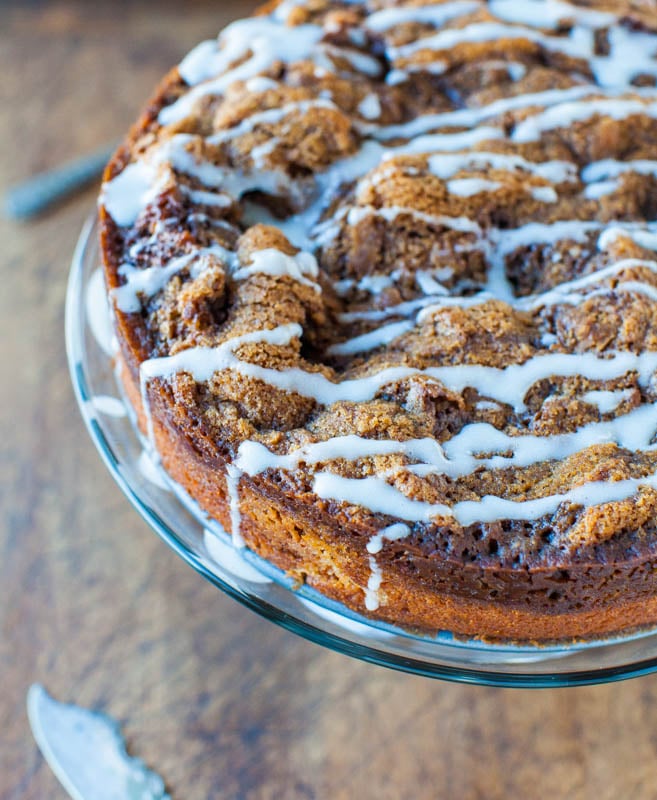 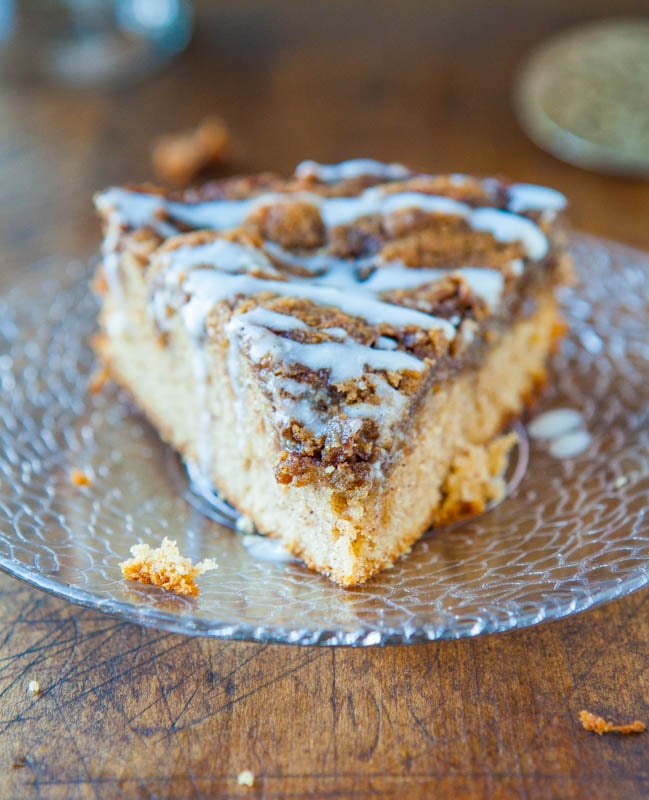 To make the cake, begin by beating together butter and sugar, and after it’s nice and fluffy, a solid amount of sour cream is added to the batter. The sour cream ensures this cake stays moist and tender.

Too often coffee cakes are wickedly dry and crumbly and they could literally be called crumble cakes, and that wouldn’t be a compliment. I think they get their name because most of them are so dry that coffee is mandatory in order to wash down the dry crumbly mess.

In addition to the sour cream, I added a bit of canola oil because oil keeps cakes moist and soft. I wanted to ensure this cake was anything but dry and pulled out all the tricks.

Pour the cake batter in a 9-inch springform pan and make sure the pan you’re using is at least three inches high. 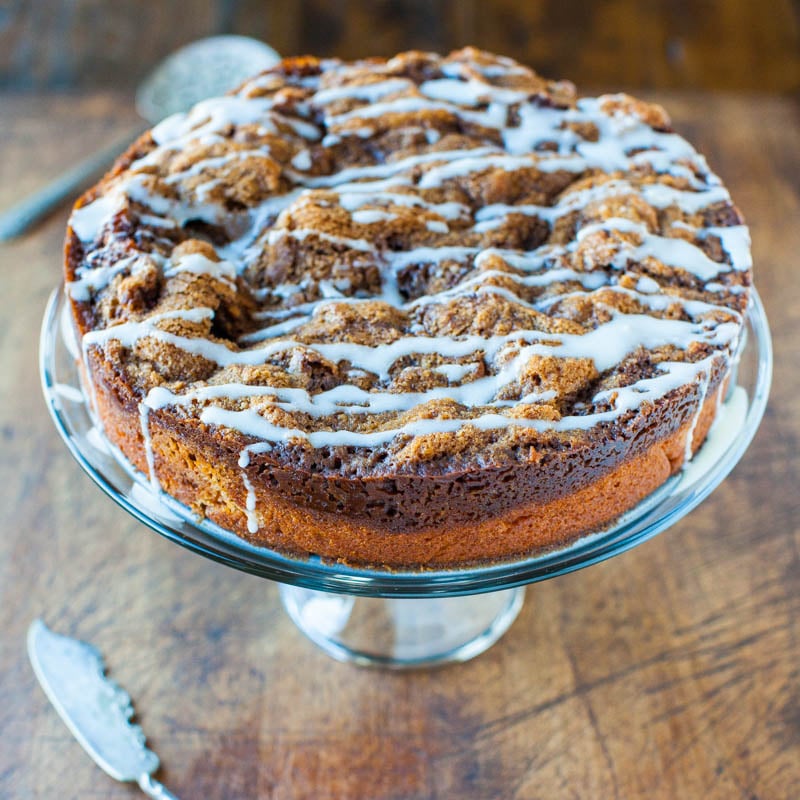 All good cinnamon rolls have a scrumptious filling that’s buttery and cinnamon-sugary and after making the cake batter, I made a mixture that worked double-duty, both as the filling for the cinnamon rolls as well as a stresuel-like topping layer.

To make the filling-topping mixture, combine a very soft, almost melted, stick of butter with one cup of brown sugar and hearty pinch of cinnamon.

The butter needs to be very soft in order to be whipped together with the brown sugar and cinnamon but it shouldn’t be fully liquified. The butter can either be softened for an hour or more at room temperature on the counter, or you can achieve the same goal in about twelve seconds in the microwave.

After beating it together, it will look like a ridiculously large amount of a gritty, granular substance and you’ll wonder if this could be right. It is. 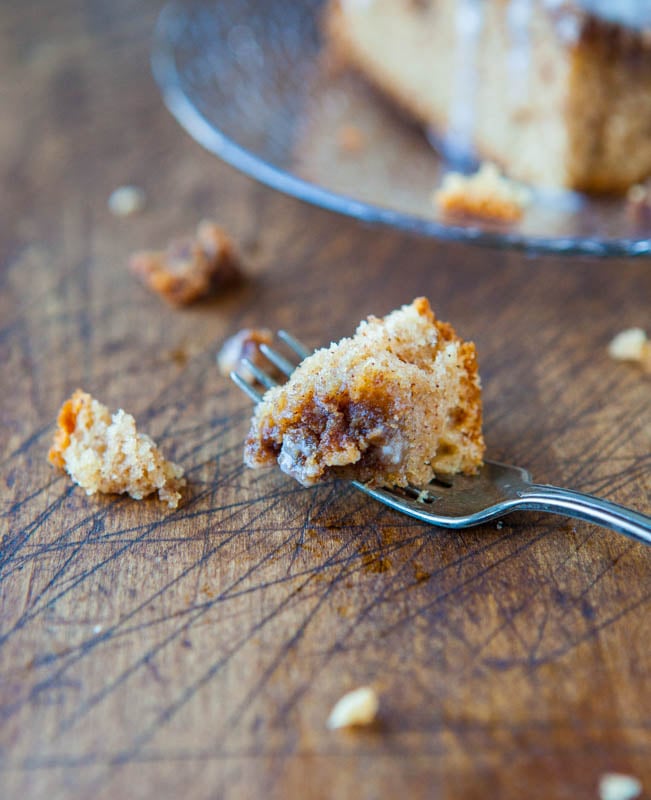 Use the filling-topping mixture as if you were going to frost a cake, and ‘frost’ the cake batter by spreading the mixture over the top of it. After it’s all nice and smooth, you’re going to make a mess of it.

Take a butter knife or table knife and marble the mixture throughout the cake batter, going up and back; repeat. Back and forth, back and forth. I got pretty aggressive with my up-and-backing in order to really drive the mixture into the interior cake so the ‘cinnamon rolls’ had plenty of filling.

Feel free to skip the drizzle and use more of a pouring technique, which is my preferred method. I like a little cake with my frosting and after the pictures were done, there was a frosting freeflow free-for-all. 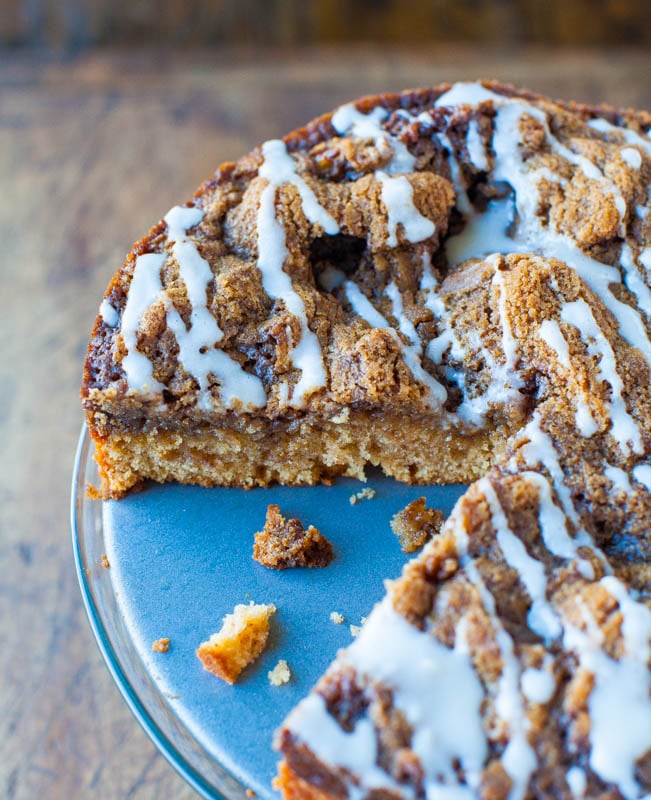 Do I Have to Use a Springform Pan?

If you don’t have a springform pan, the cinnamon streusel coffee cake can also be baked in a nine-inch square pan, but do not use a nine-inch round cake pan as round cake pans hold less overall volume than square pans. Plus, they’re typically only an inch or two tall and you’d have a cake-tastrophe.

I haven’t frozen this particular cake, but I’m sure it’d be fine. Wrap it in plastic wrap, then seal inside a freezer bag. You may want to freeze without the glaze to ensure the texture remains the same. 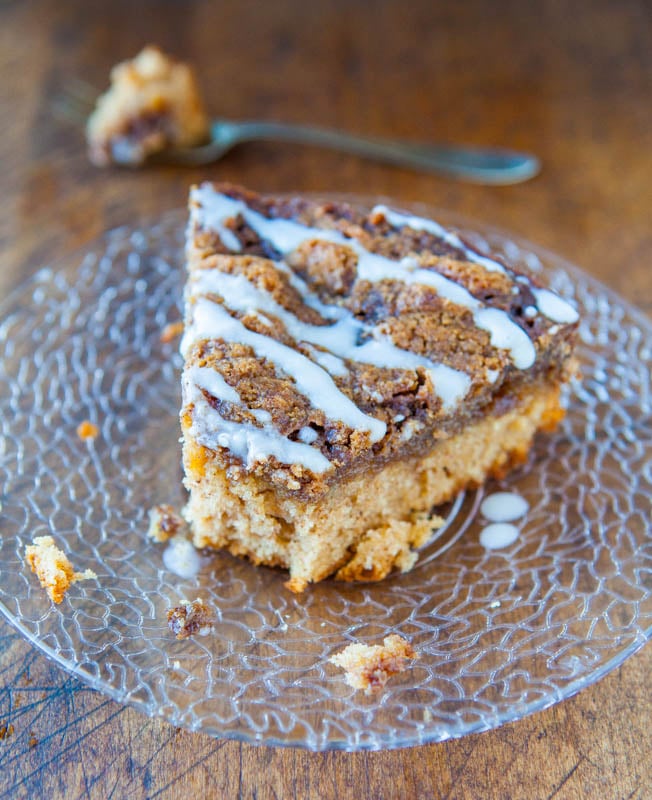 If you prefer to refrigerate cream-cheese based glaze, you may wish to only glaze individual pieces of cake immediately prior to serving them and store the glaze in small container in the refrigerator, as opposed to refrigerating the entire glazed cake, which will cause it to dry out.

Or, you can glaze the cake and store it at room temperature anyway, as everyone has different food storage comfort levels.

Cake will keep in an airtight container at room temperature for up to 5 days.

As a baking precaution, place the springform pan on a baking sheet in case your pan doesn’t have a perfectly tight seal. Nothing like the smell of cake batter as it drips onto the bottom of the oven and chars. Whenever I bake with a springform pan I always place it on top of a baking sheet as just-in-case insurance.

As the baking time draws near a close, be sure to keep an eye on the cake because the butter and brown sugar will be prone to burning. Caramelization and crisping up is one thing, burning is another.

Because ovens vary and so do preferences, I recommend keeping a very watchful eye on the cake and hanging around the kitchen in the last 10 to 15 minutes of baking.

Baking pan: A 9-inch square baking pan may be substituted if it's at least 3 inches in height. Don't use a 9-inch round cake pan because it's too shallow.

Storage: If you prefer to refrigerate cream-cheese based glaze, you may wish to only glaze individual pieces of cake immediately prior to serving them and store the glaze in small container in the refrigerator, as opposed to refrigerating the entire glazed cake, which will cause it to dry out. Or, you can glaze the cake and store it at room temperature anyway, as everyone has different food storage comfort levels.

Cake will keep in an airtight container at room temperature for up to 5 days.

Buttery Crumb Coffee Cake — his coffee crumb cake recipe couldn’t be easier to make! It’s made with boxed yellow cake mix, which is used in both the batter and the crumble topping. 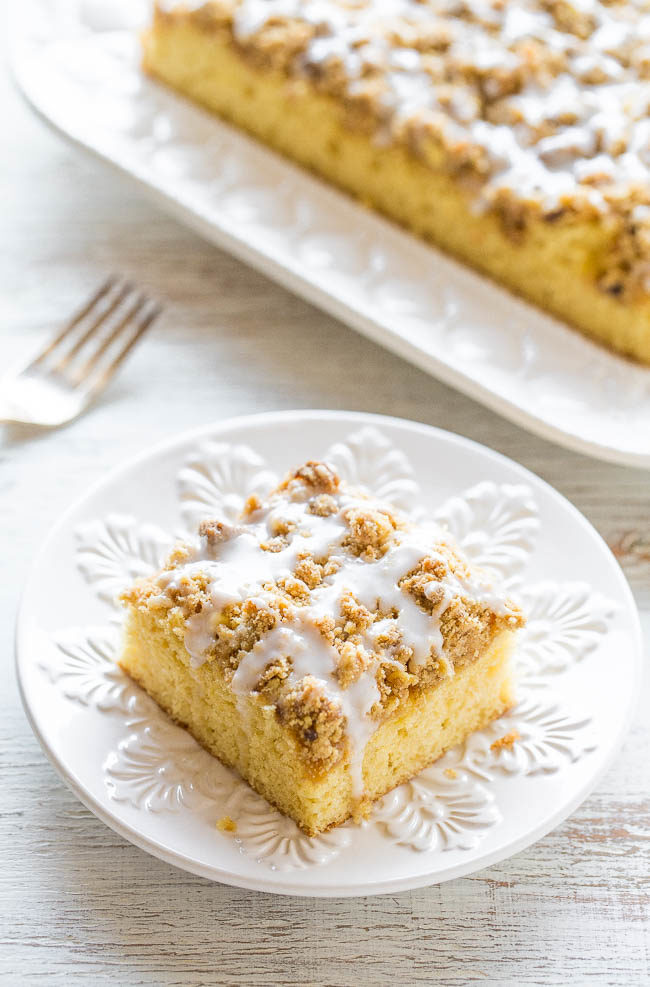 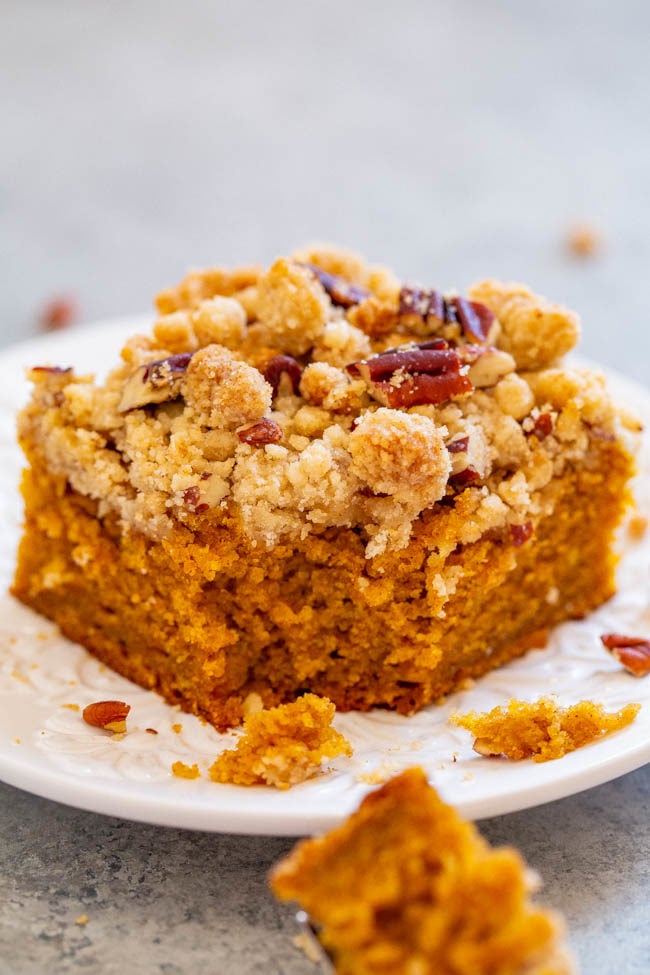 Blueberry Streusel Coffee Cake — An EASY, no-mixer cake studded with juicy blueberries and topped with big buttery streusel nuggets that are just SO GOOD!! Not overly sweet and PERFECT with a cup of coffee for breakfast, brunch, or a snack!! 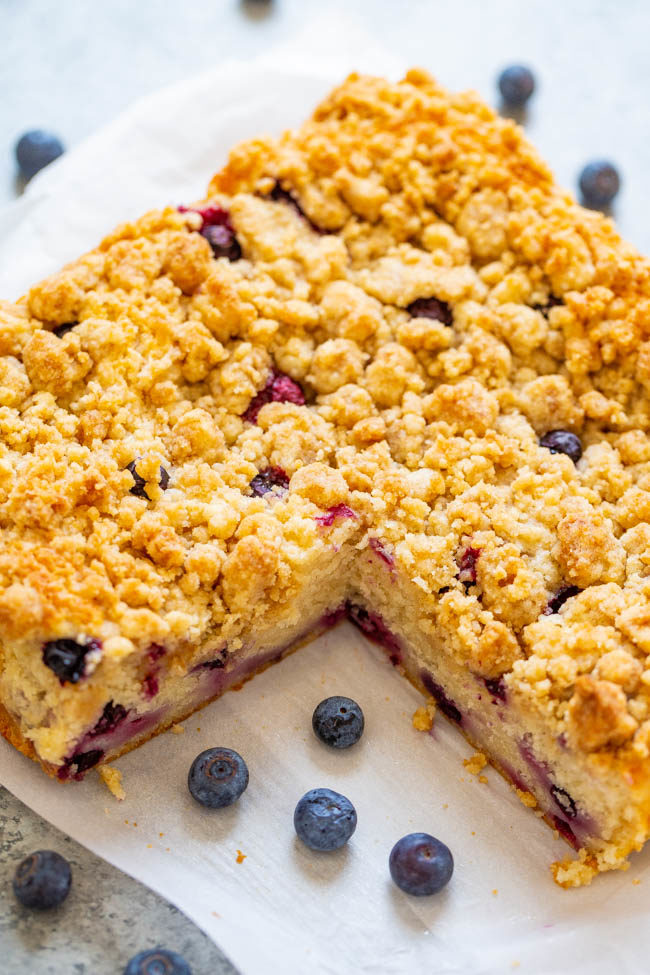 Vanilla Coffee Cake — It’s fluffy soft, sweet, creamy, and as a happy accident, it turned out very close in taste and texture to boxed yellow cake mix cake, which I have a nostalgic love for. 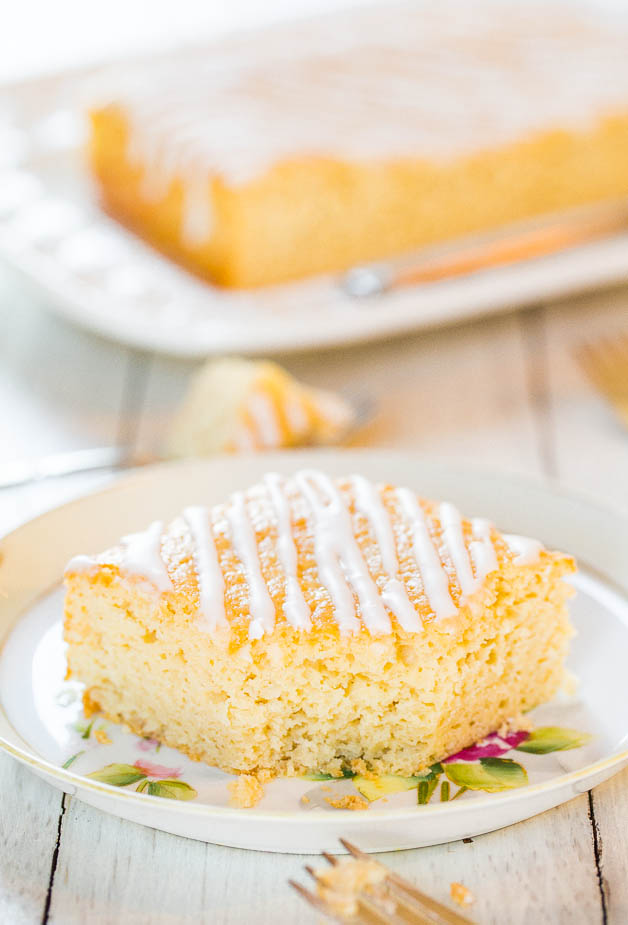 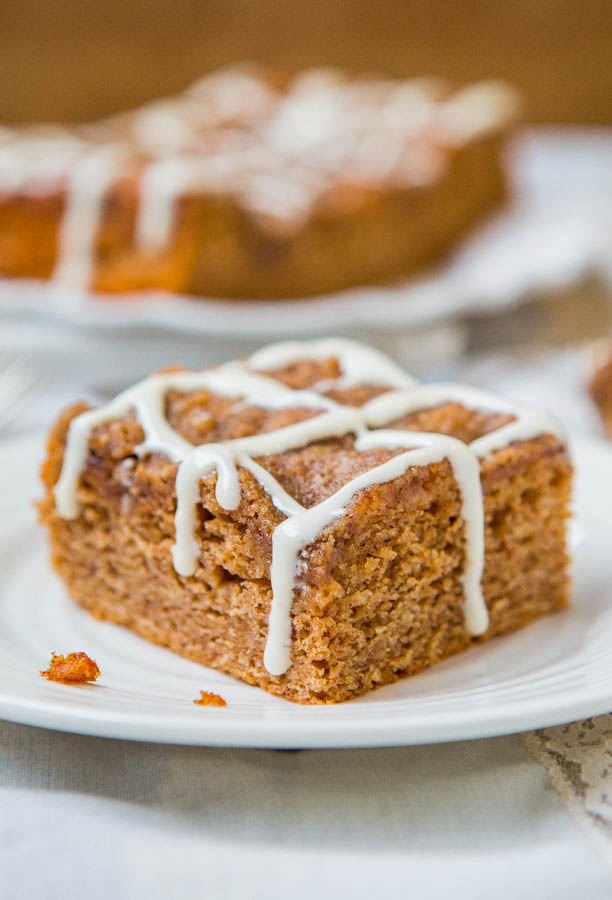