Cornbread Stuffing — Fast and easy homemade cornbread is transformed into a family favorite cornbread stuffing side dish with the addition of celery, onions, garlic, broth, and a bouquet of fresh herbs! Soft, tender, EASY, and sure to become a hit at your Thanksgiving and Christmas holiday celebrations! 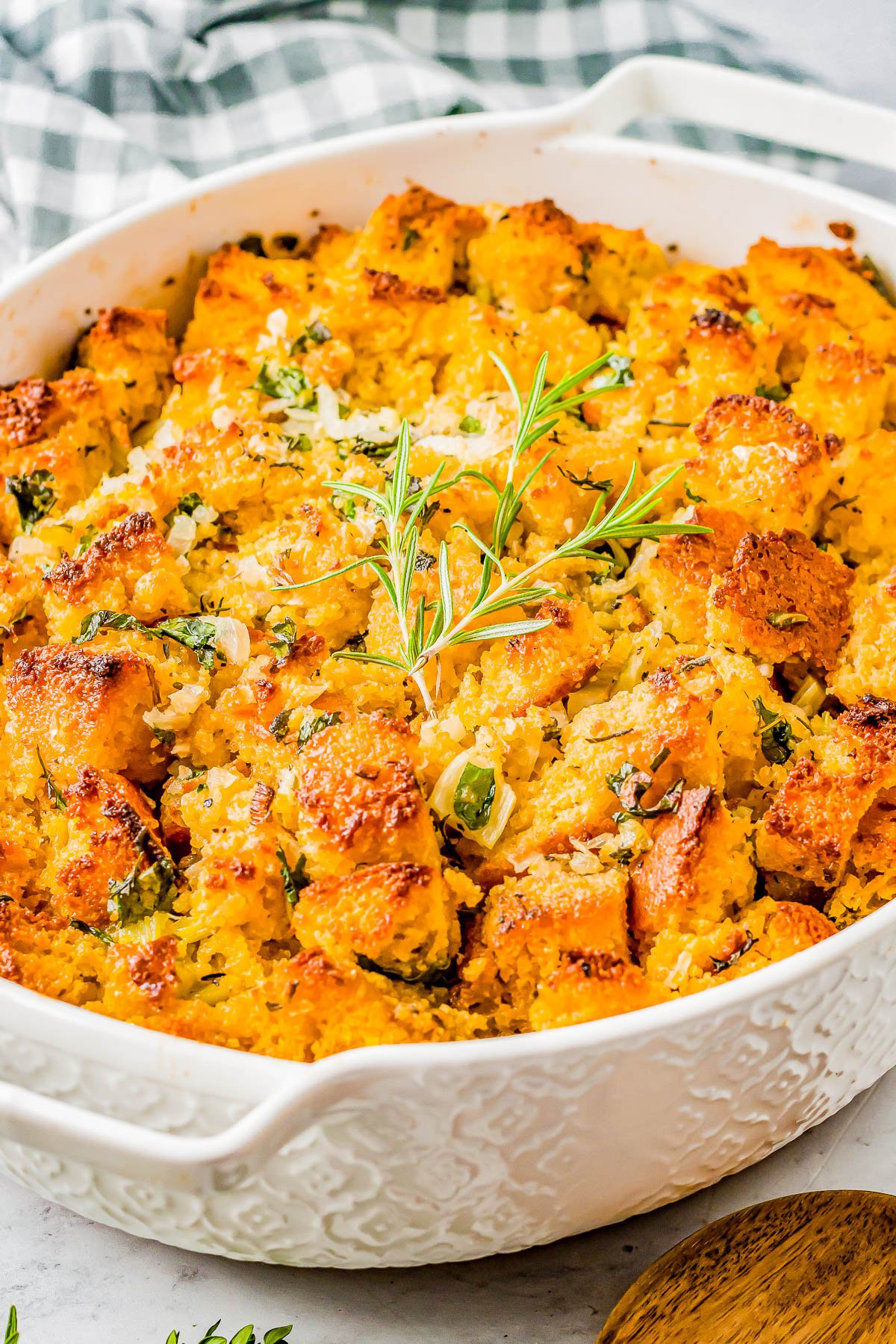 My family goes nuts for stuffing of any kind. It’s more of a star than the turkey for them!

This easy cornbread stuffing has the buttery subtle sweetness that comes from freshly baked homemade cornbread that’s cubed and tossed with a mixture onions, celery, sage, thyme, rosemary, broth, and a bit of milk before baking

While you’re fussing over who’s going to do the honors of carving the turkey and who is going to sit where at the table, you can breathe easily knowing this homemade cornbread stuffing doesn’t require too much of your attention and is a breeze to make. 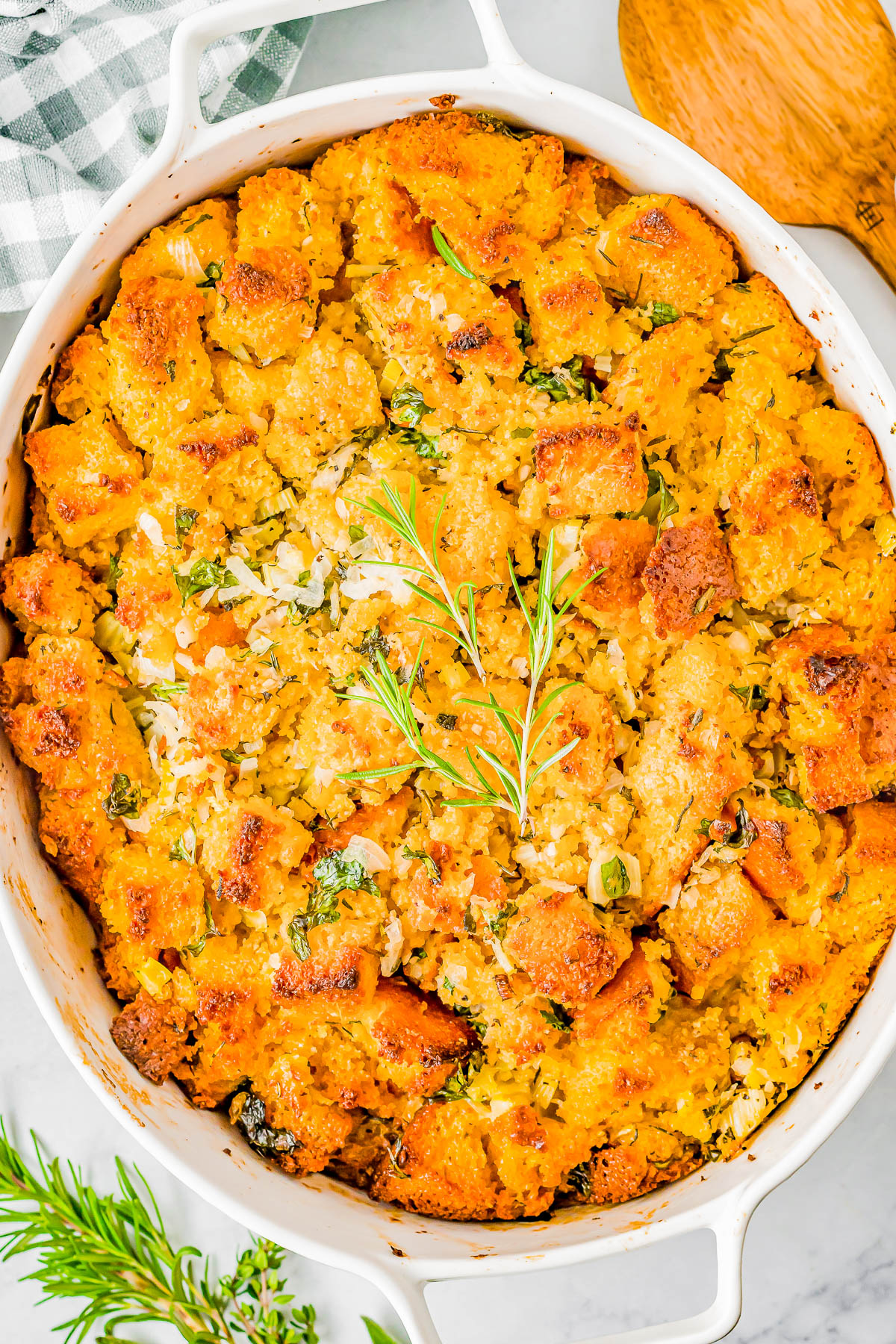 Even the most novice of home cooks can master this easy recipe for the holidays like Thanksgiving and Christmas and is sure to become a comfort food classic side dish recipe because it has tons of moisture and flavor thanks to starting with cornbread that’s not dry, adding broth and milk, and of course plenty of fresh herbs.

Speaking of herbs, you’re going to love the aroma and flavor of the sage, thyme, rosemary, and parsley as they perfume your house and cause everyone to say, oh wow the kitchen smells so GOOD!

Those herbs are what Thanksgiving smells like for me. That is, if Thanksgiving could have its own signature scent!

While I highly recommend using fresh herbs, I’ve included some tips and tricks in this post to help you measure dried herbs if that’s the route you take. 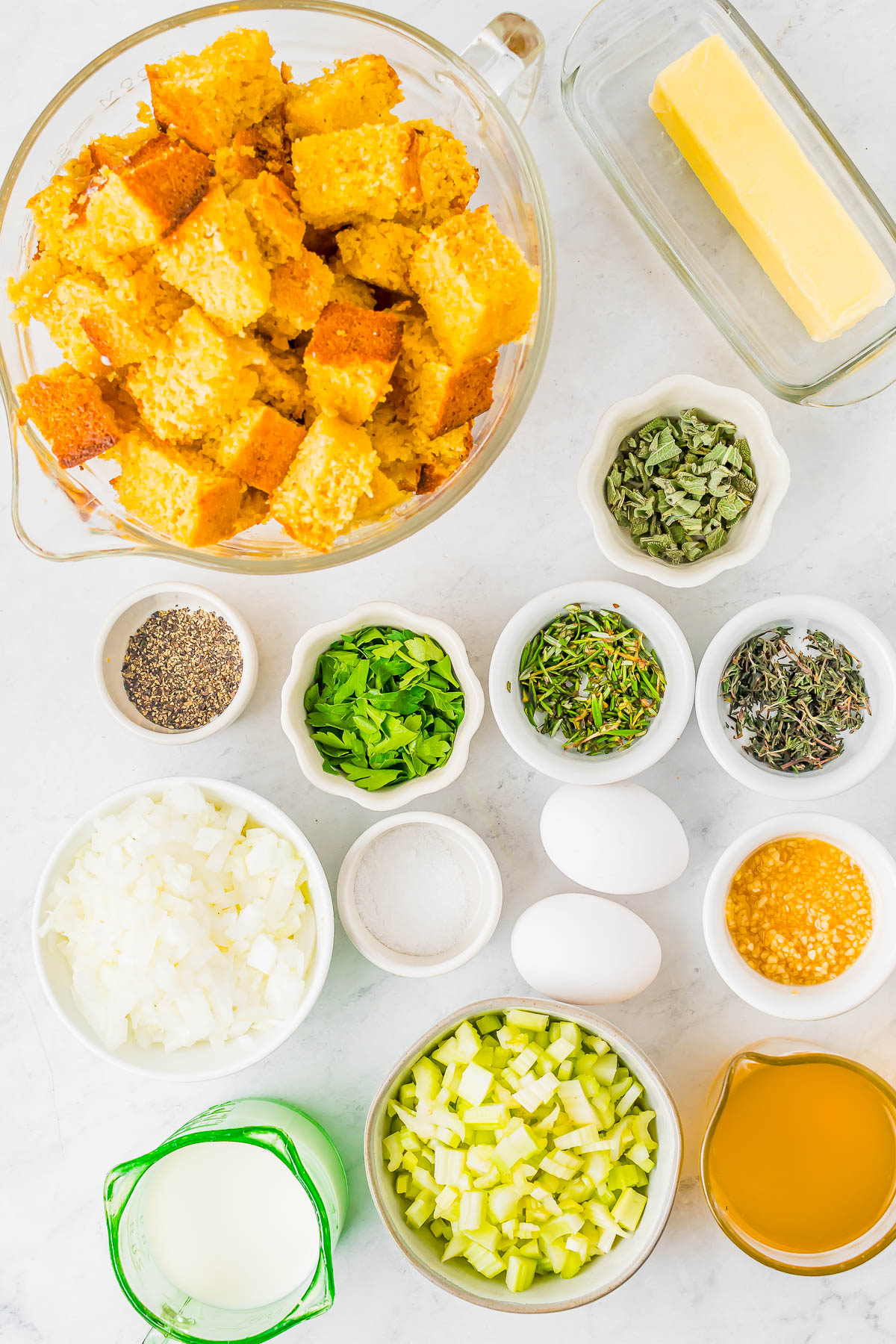 For this holiday side dish recipe, you’ll only need a short list of easy-to-find fridge and pantry ingredients including the following items:

Note: Scroll down to the recipe card section of the post for the ingredients with amounts included and for more complete directions. 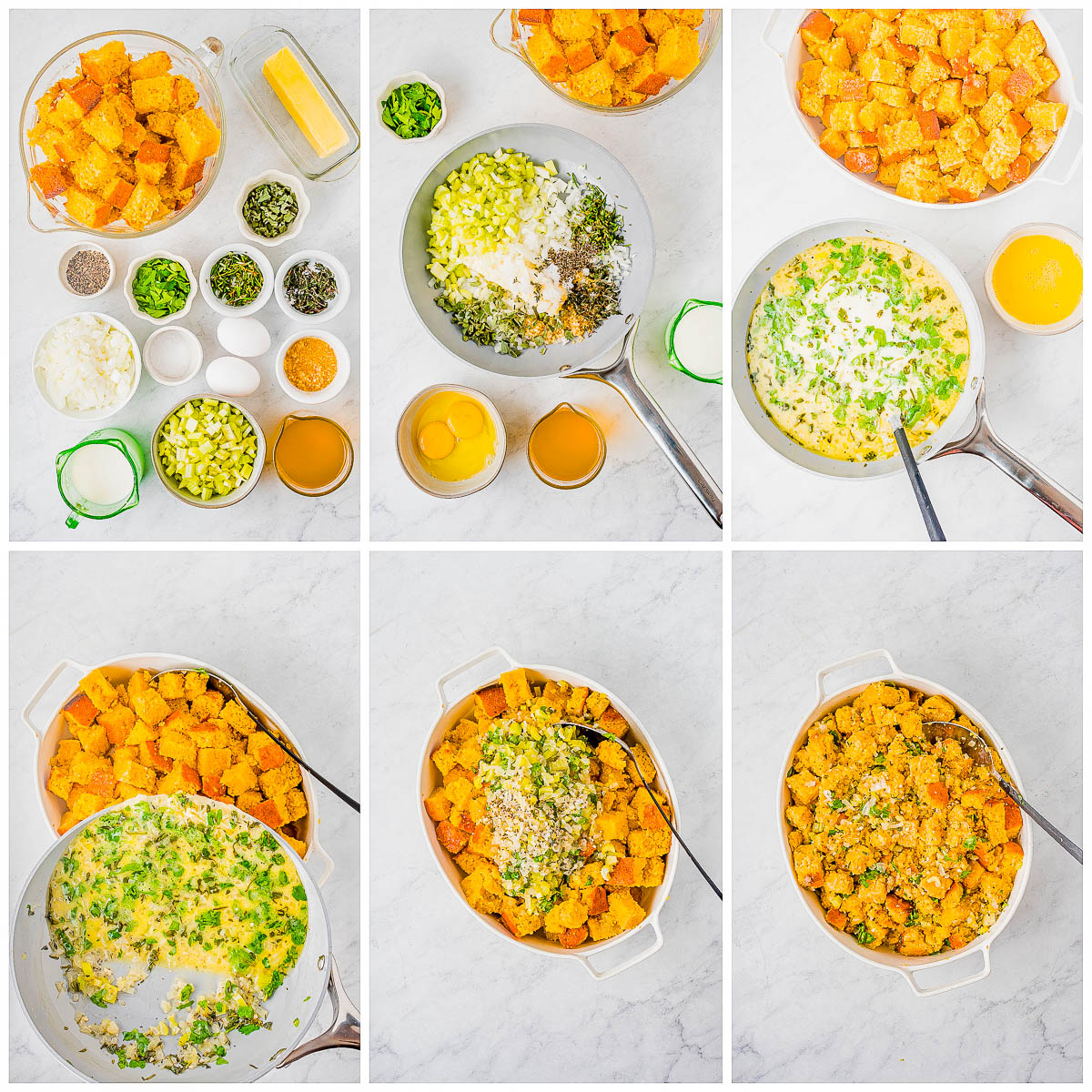 How to Make Cornbread Stuffing

Don’t be scared of making a stuffing recipe with cornbread! I promise that they’re both a cinch. Follow my easy and straightforward directions and you’ll wind up with a new favorite stuffing recipe this year!

Step 1: Make the cornbread and then cube it. You can use my fast and easy Skillet Cornbread recipe and make a double batch, OR use one 15-ounce box of something like Krusteaz. two 8.5-ounce boxes of Jiffy, or another favorite boxed cornbread mix.

Step 2: Preheat the oven, spray a baking dish or casserole dish, and add the cubed cornbread to it.

Step 3: To a saute pan, add the butter, onions, celery, and saute momentarily before adding the garlic, herbs and seasonings, salt and pepper, and sautéing for 2 minutes more. 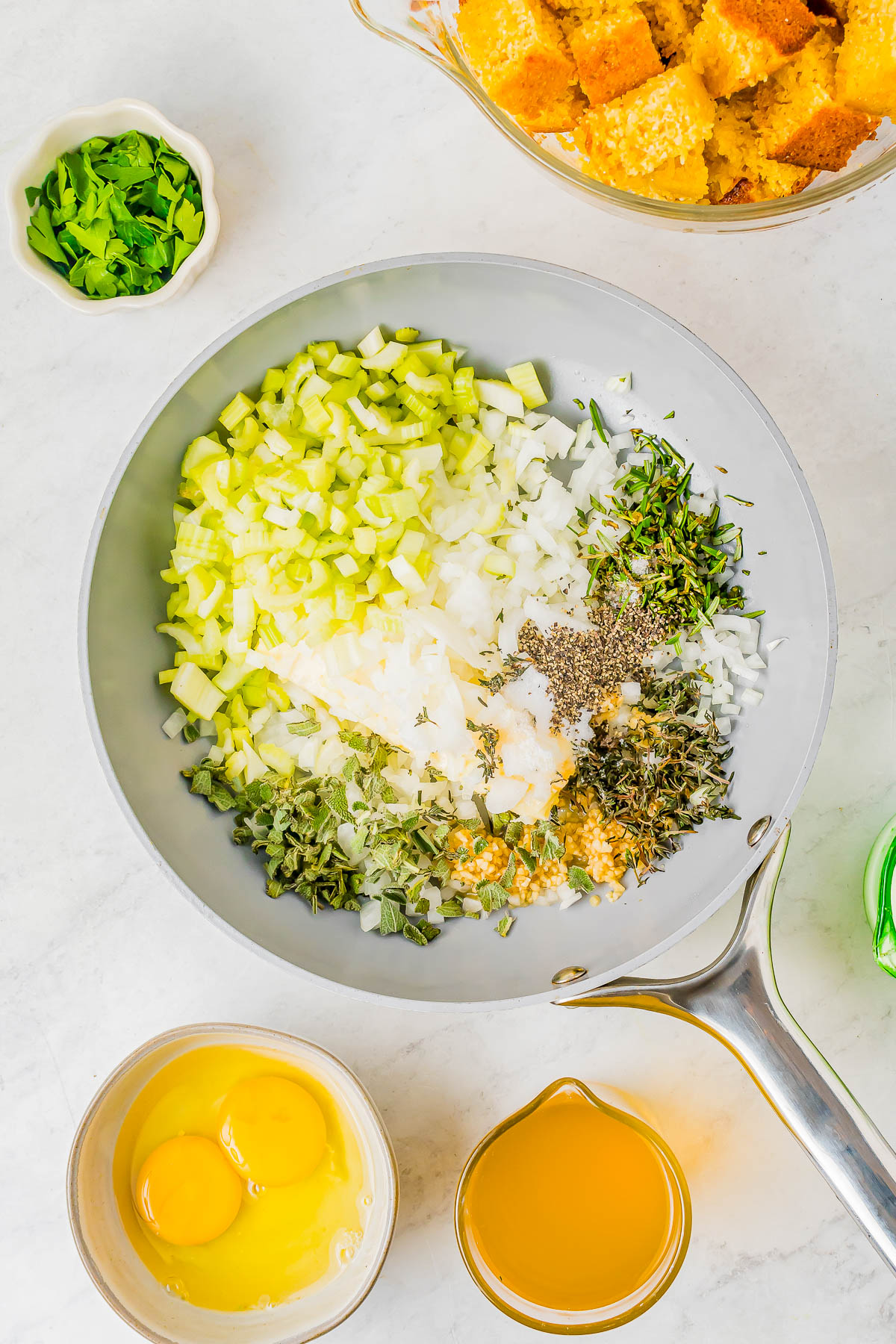 Step 4: Add the broth, milk, stir to combine, and remove the pan from the heat. 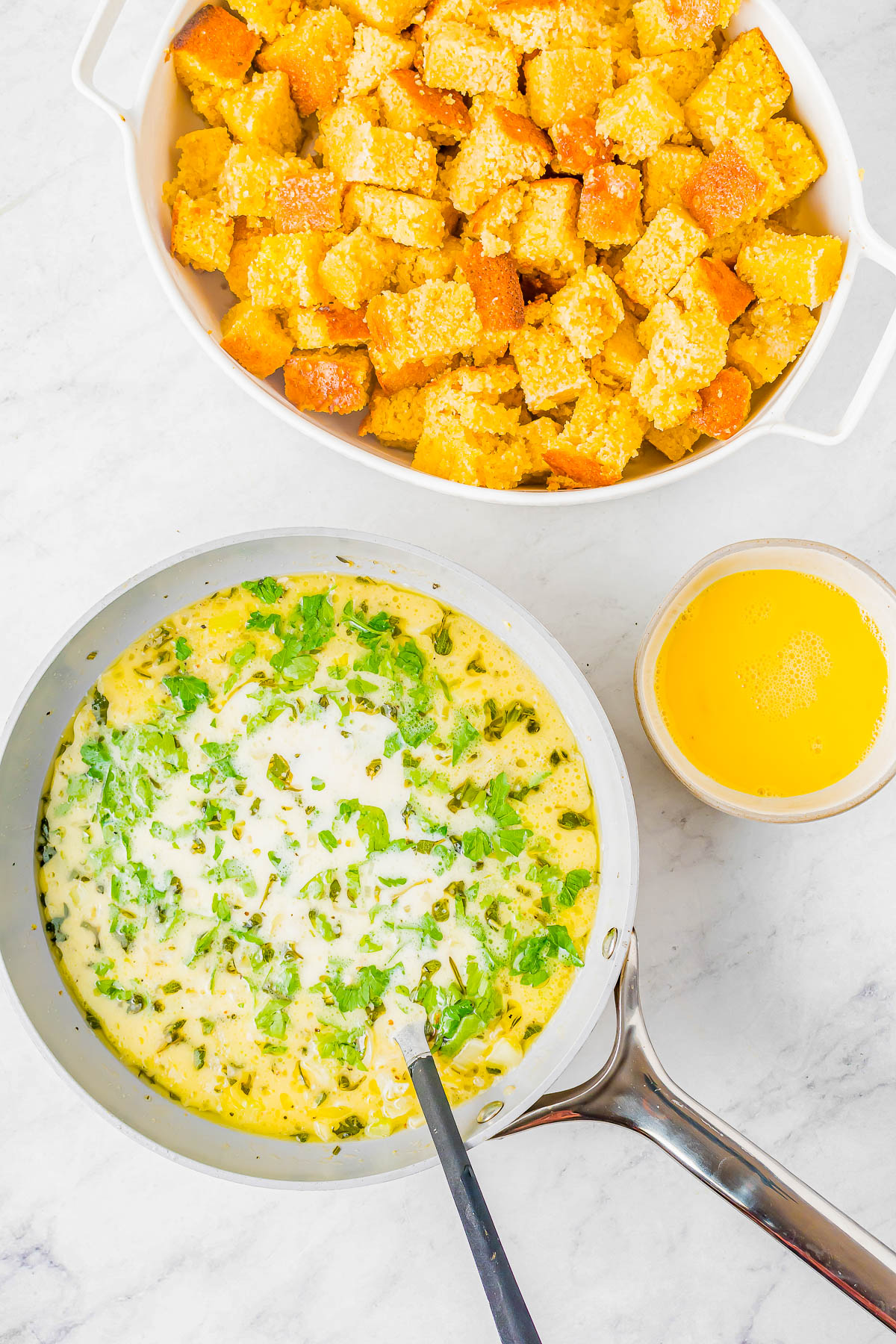 Step 5: Whisk a little of this warm milk mixture into two beaten eggs (this is called tempering the eggs) and then stir the eggs into saute pan.

Tip: Do not skip the skip of tempering because if you just add whisked eggs directly into the hot buttery mixture, you’ll wind up with scrambled eggs. Not good! 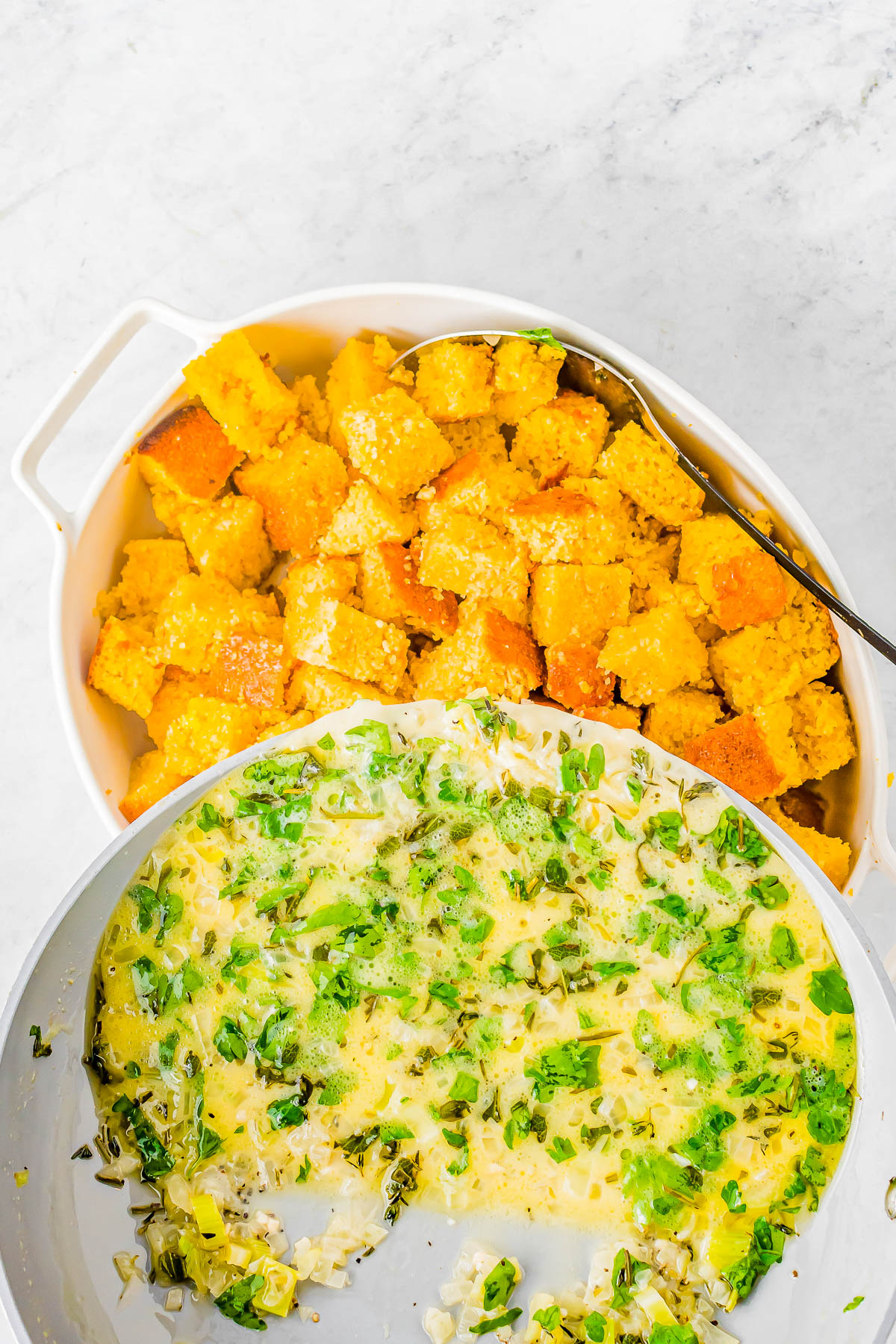 Step 6: Pour the mixture evenly over the cornbread.

Step 8: Cover the baking dish with foil and bake for 20 minutes. 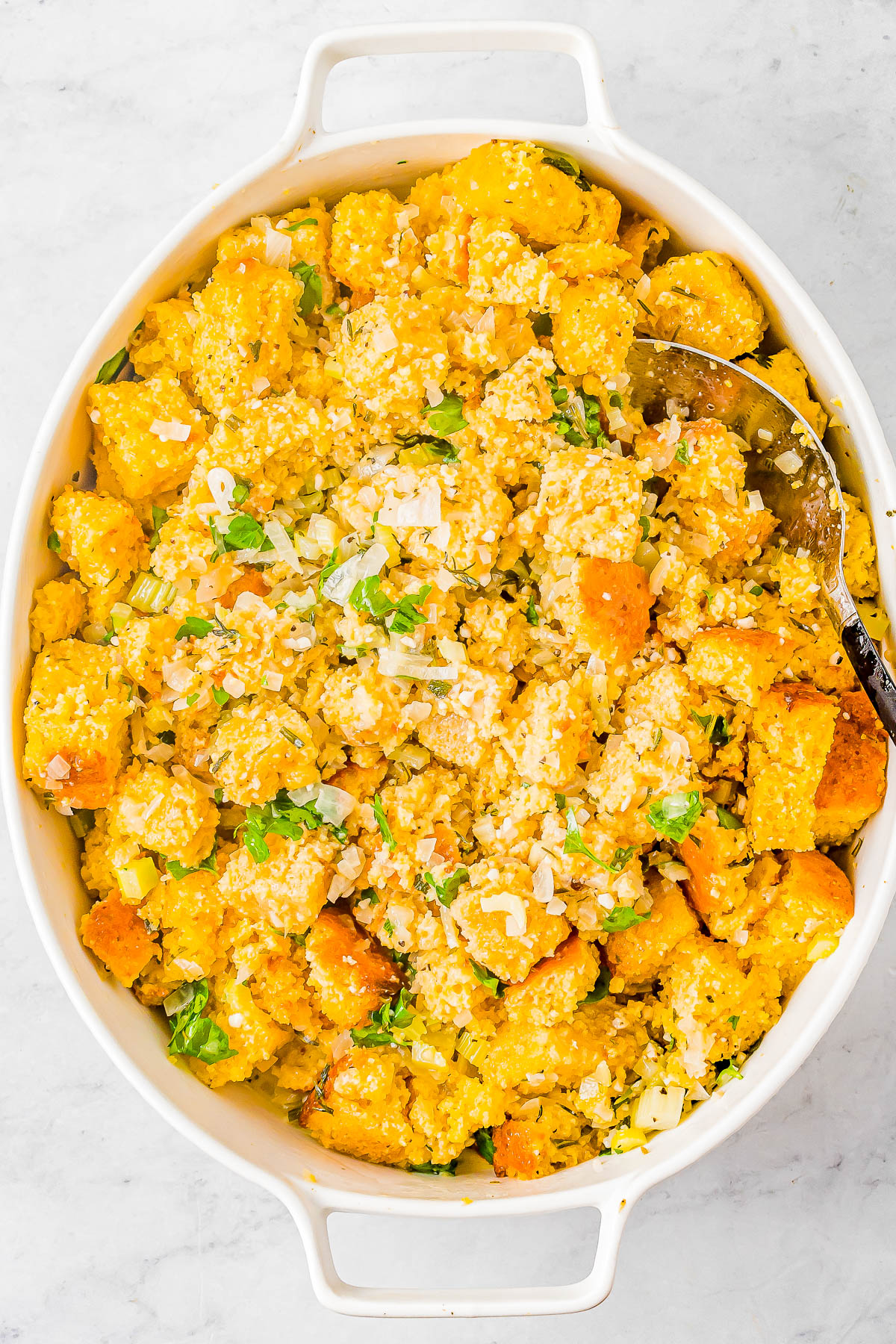 Step 9: Remove the foil and bake for another 20 minutes or until lightly golden browned on top and then get ready to serve the homemade cornbread stuffing! 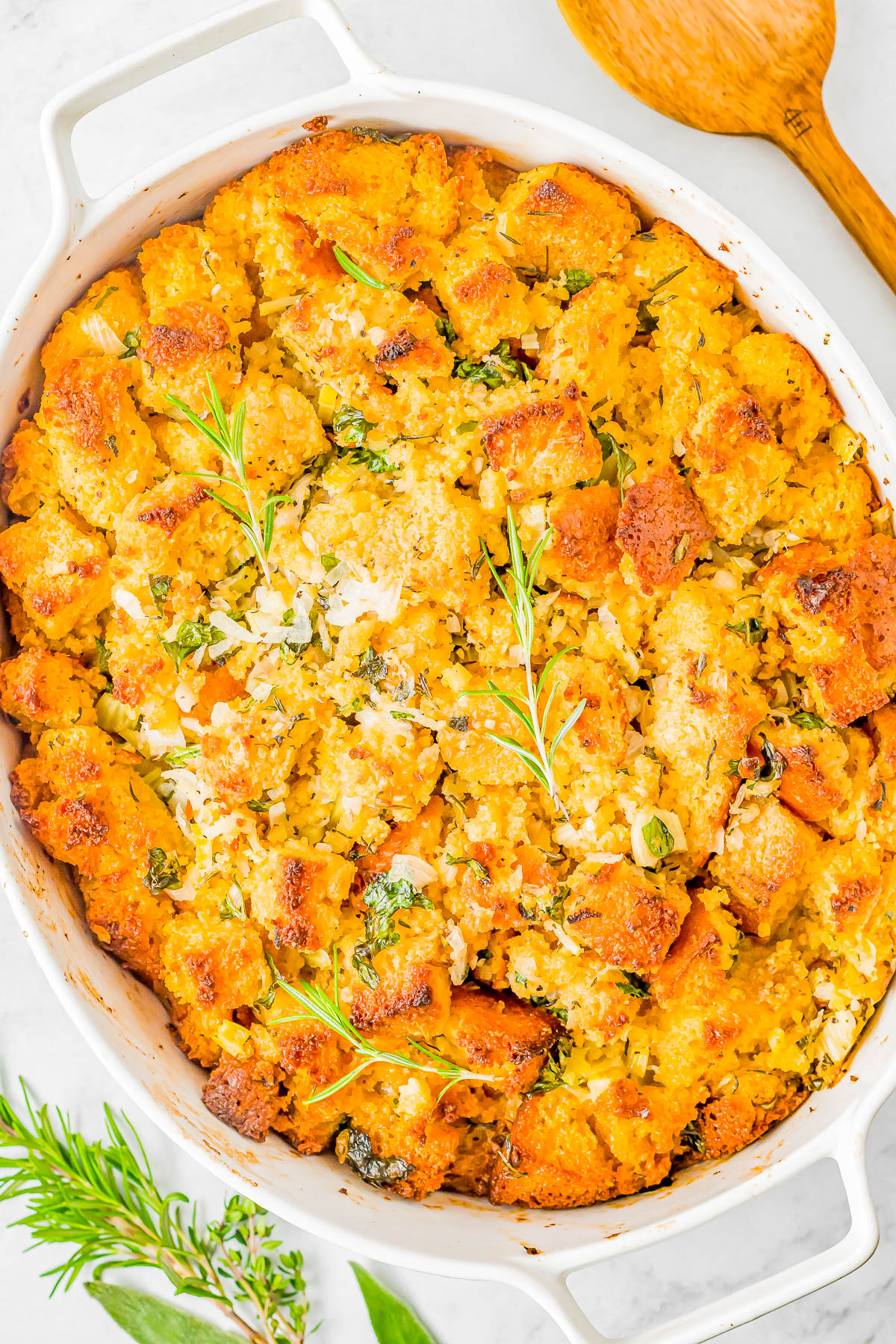 What Kind of Cornbread is Best for this Recipe?

Since cornbread is the star of the show here, I highly recommend making your own homemade cornbread for this holiday side dish recipe.

My Classic Skillet Cornbread recipe is fast, easy, foolproof, tastes delish, and ready in 30 minutes from start to finish!

That being said, you can also use a store bought corn bread mix. There are tons on the market including Krusteaz, Jiffy, Trader Joe’s has one, and there are so many store brands, too. 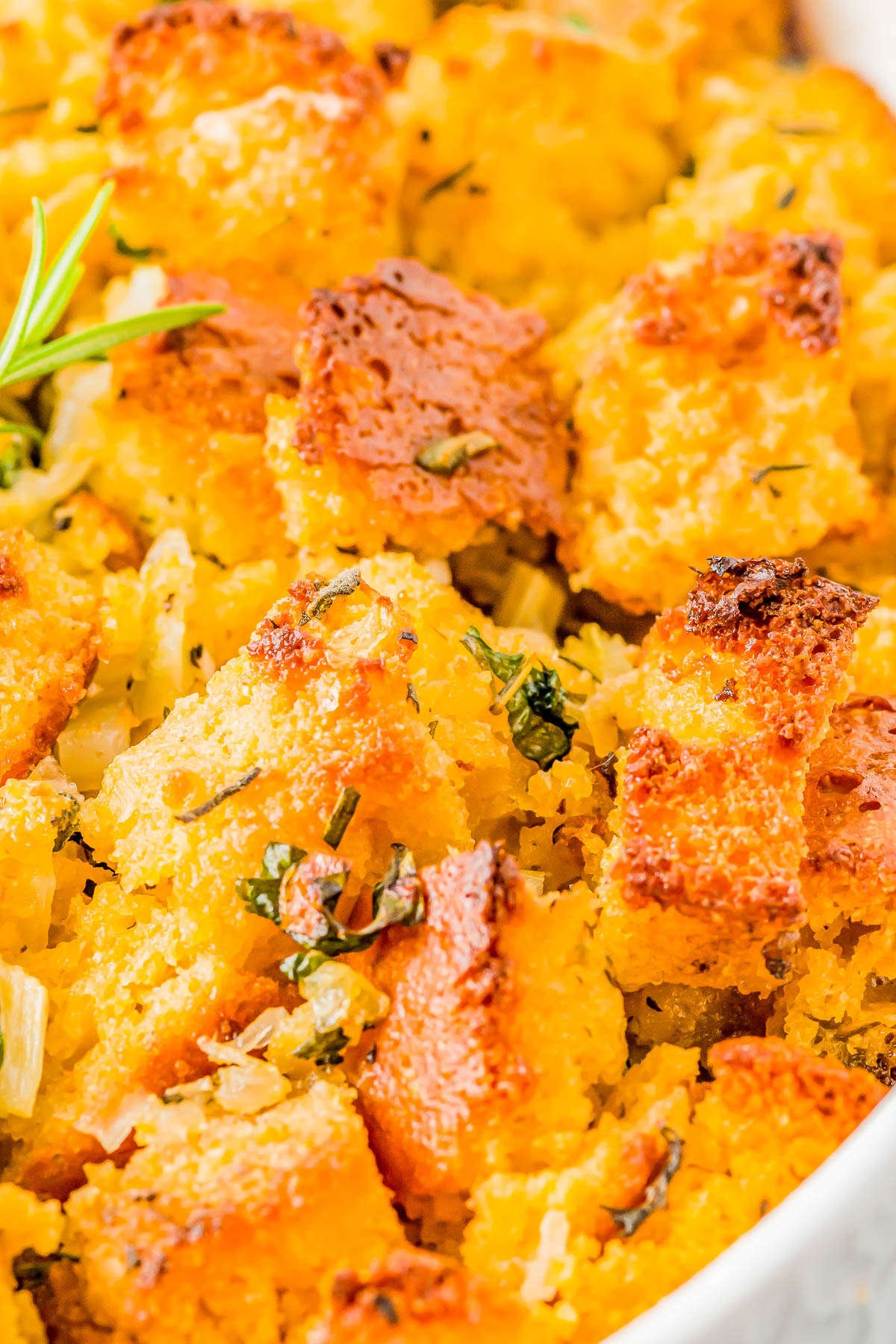 How Much Cornbread Do I Need?

You’ll need 8 cups of cubed cornbread to make this recipe for cornbread stuffing.

If you’re using my favorite homemade cornbread recipe, you’ll need to make 2 batches in order to have enough.

Luckily, it’s such an easy recipe that it’s not a bother at all to double up on those ingredients. I suggest baking it in two separate 9-inch cast iron skillets.

If you want to use a boxed mix to make the cornbread, I suggest one 15-ounce box of something like Krusteaz. two 8.5-ounce boxes of Jiffy, or another favorite boxed cornbread mix.

Make sure you yield 8 cups of large-cubed cornbread no matter what approach you take to get there since all mixes will vary in their exact yield. 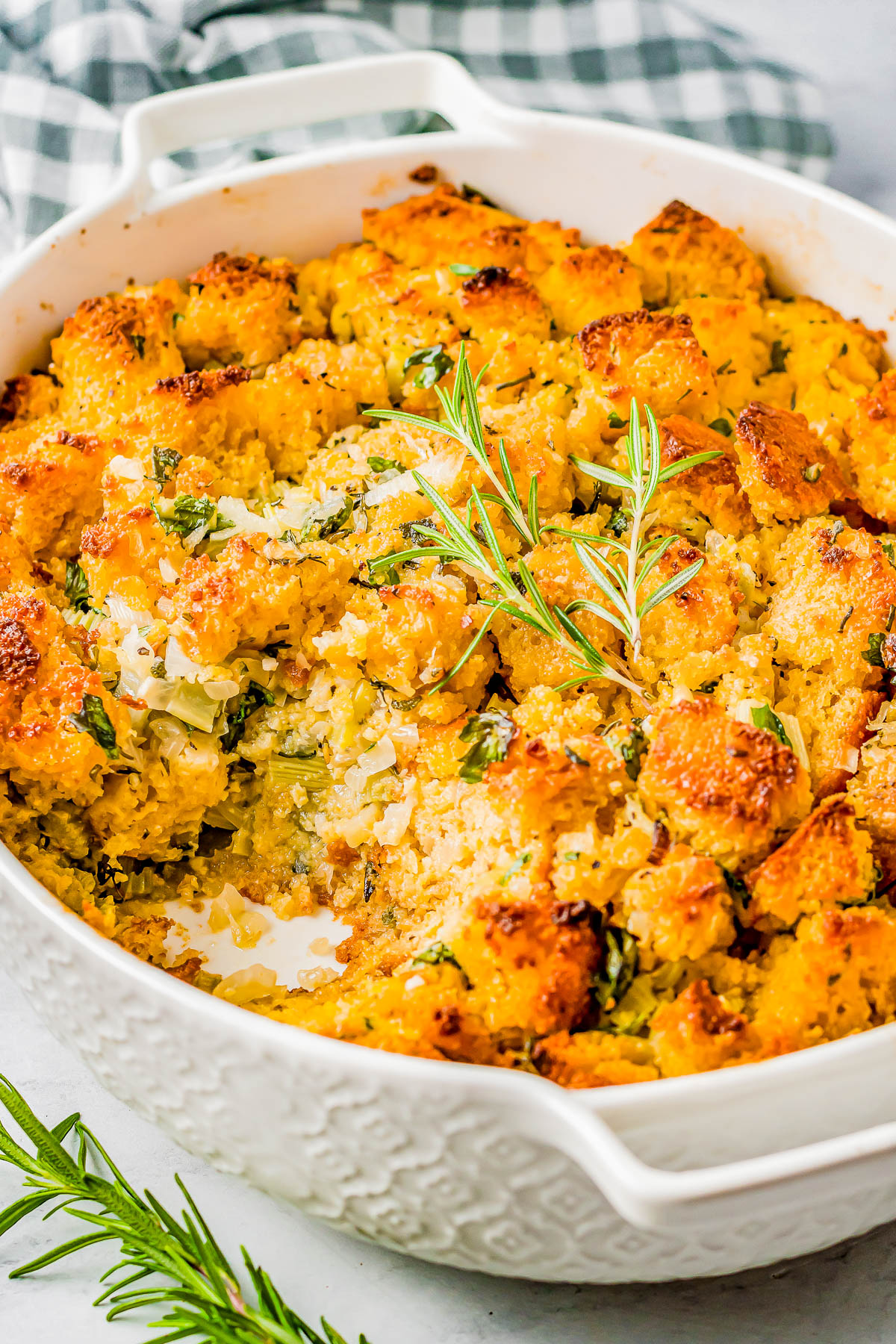 What Kind of Baking Pan Should I Use?

Alternatively, you can alternatively use one 9×13-inch pan for the double batch if you don’t have a 9-inch skillet. 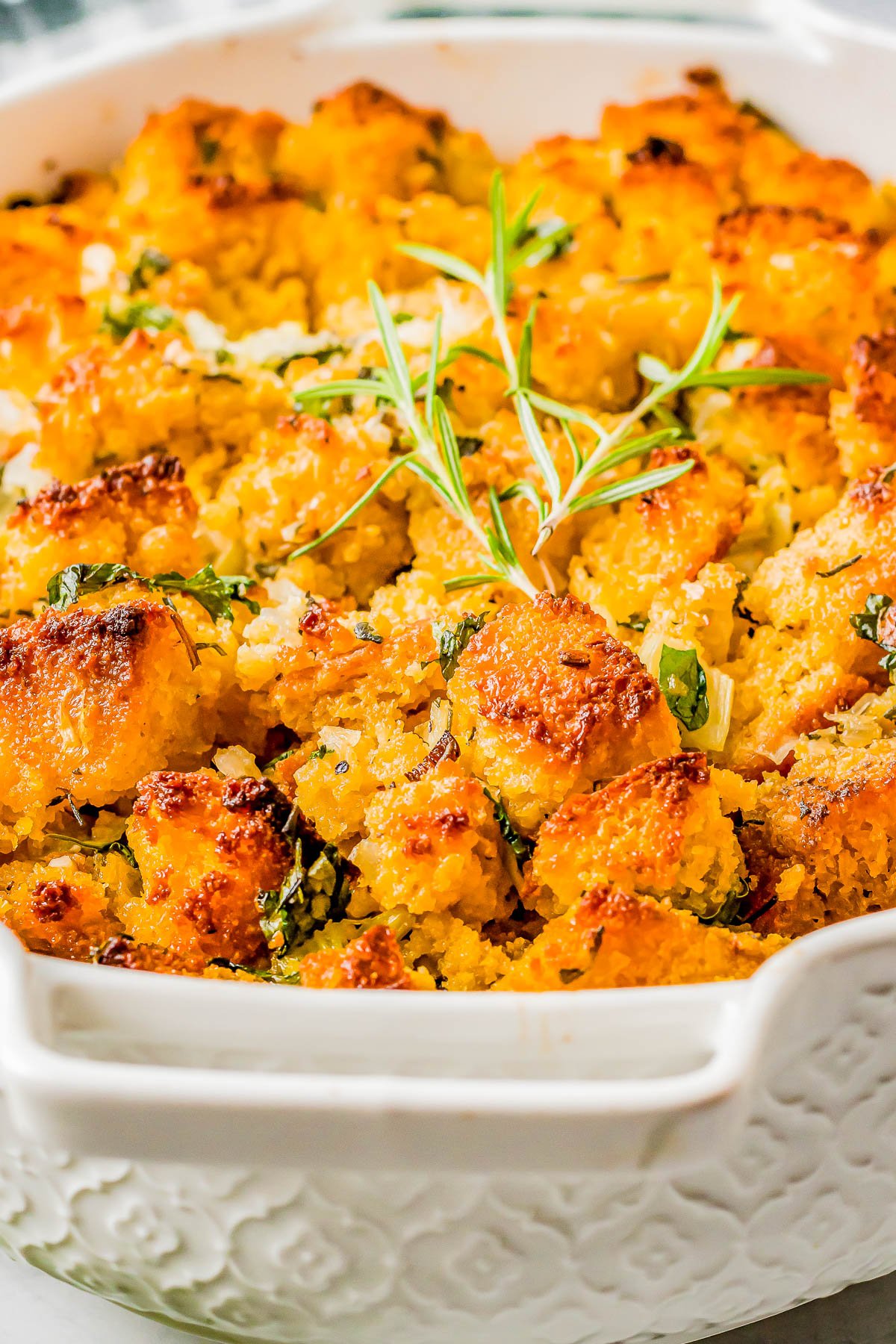 Can I Use Dried Herbs?

I strongly prefer using fresh herbs in this recipe for homemade cornbread, and if you’re cooking any other type of holiday recipe from turkey to green bean casserole to gravy, you probably already have fresh sage, thyme, rosemary, and parsley on hand anyway.

However, dried herbs will certainly work in a pinch.

Note that dried herbs tend to be more potent than fresh. For this reason, it’s best to halve the measurement of the herbs if you’re using dried versus fresh.

For example: This recipe calls for 2 tablespoons of fresh sage. If you’re using dried sage, use only 1 tablespoon. 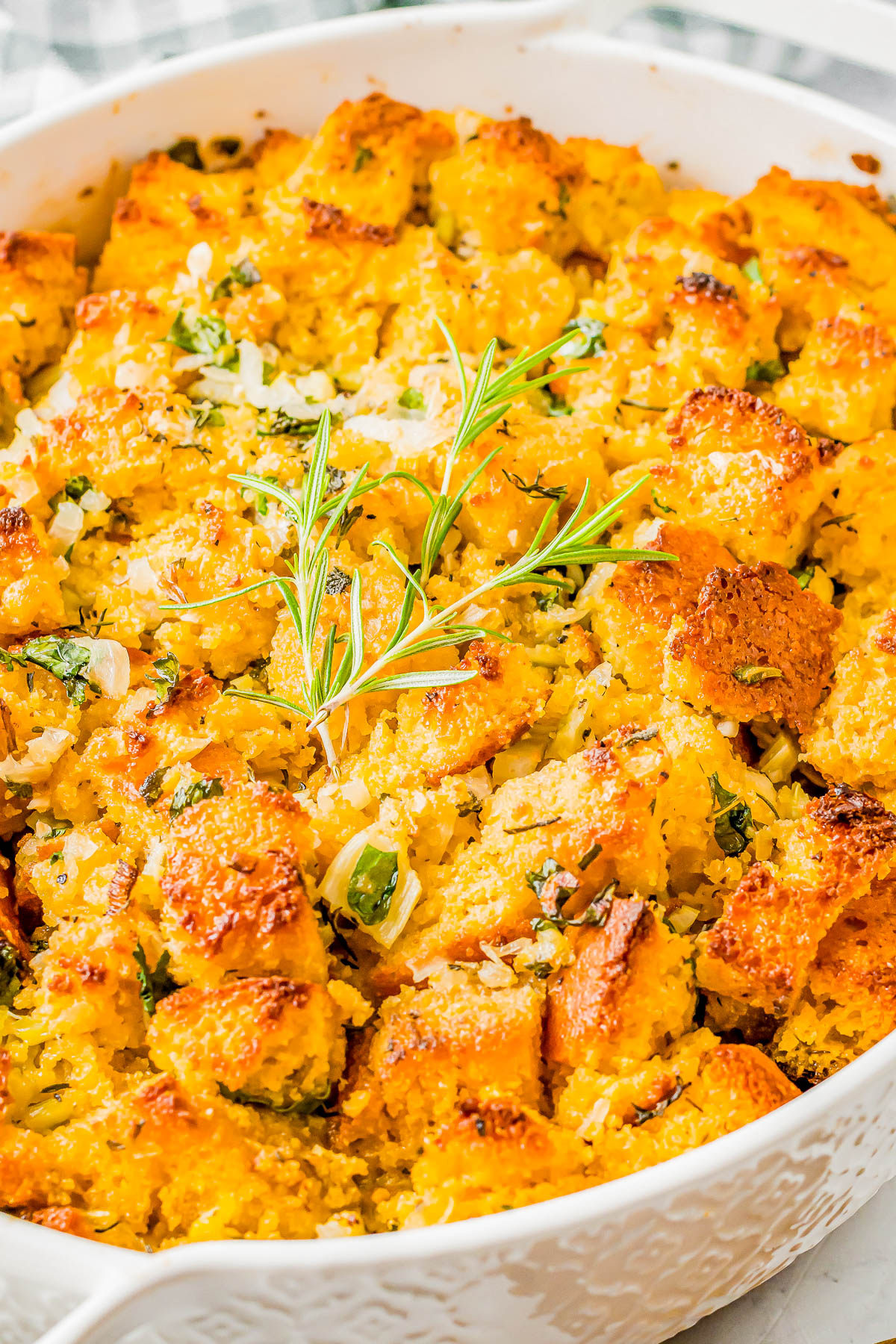 If you’re trying to get ahead for the big day, meaning a Thanksgiving or Christmas holiday meal, here are my suggestions: 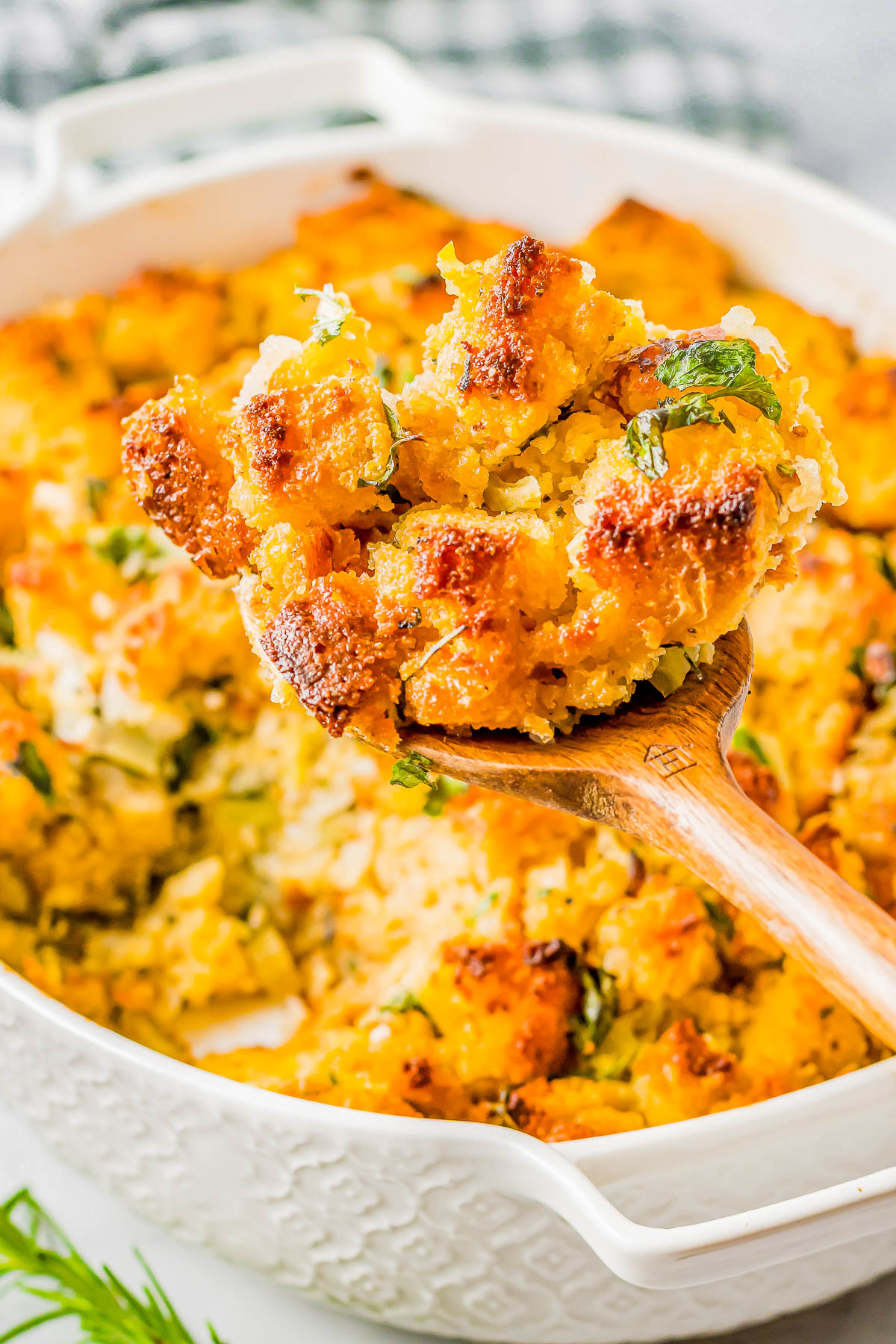 Can I Bake Stuffing with Cornbread Inside a Turkey?

I have only ever made this stuffing recipe as written and baked in its own casserole or baking dish and not inside a turkey.

Personally after hearing so many warnings to not bake stuffing or dressing inside a bird because there’s a chance it doesn’t fully cook through is enough to scare me off.

You’re welcome to try it and see what happens.

However, I never have so really can’t say other than common sense tells me you will not get these lovely golden brown tops on your cornbread and it’ll be much mushier and more mutilated-looking. 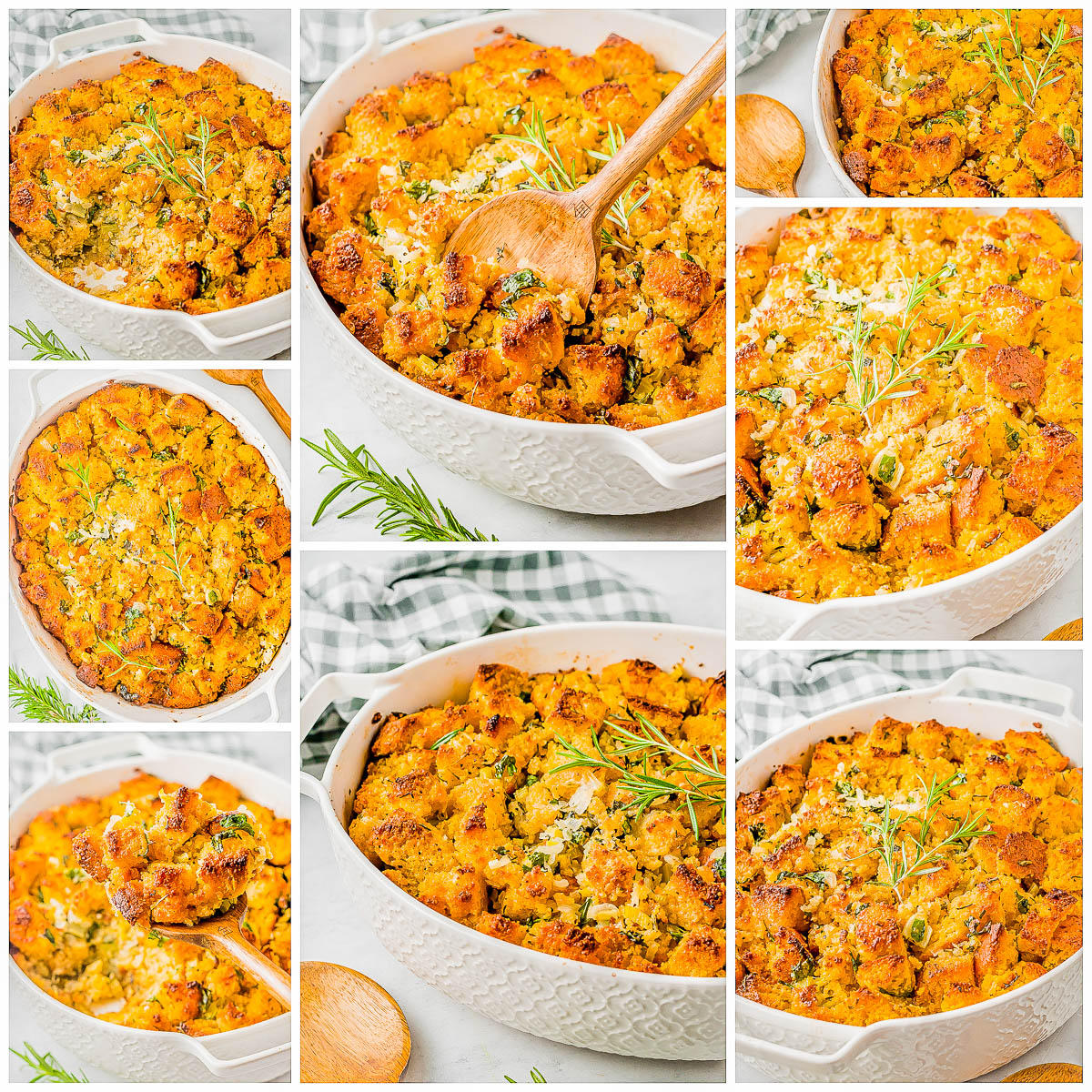 What to Serve with Cornbread Stuffing

First and foremost, let’s state the obvious! This is a Thanksgiving or Christmas holiday recipe that’s intended to be gobbled up hot and fresh and served next to the turkey and other beloved side dishes!

However, if you’re a true stuffing fiend, you can make this easy stuffing recipe other times during the year and serve it with these simple Air Fryer Pork Chops or my Cracker Barrel Meatloaf.

How to Store and Reheat Leftovers

But the holiday season is sometimes about making enough to have purposeful or planned leftovers. If that’s the case, it’ll keep airtight in the fridge for up to 5 days or in the freezer for up to 3 months.

You can reheat it in the microwave.

Or, if you want to be a little extra about it, feel free to reheat it in a 400F oven for 5 to 10 minutes, making sure to keep an eye on it so it doesn’t burn. The oven is nice because it’ll help recreate a bit of a browning and crust to the outermost layer.

Tips for Making Stuffing with Cornbread

Don’t Overmix – This is perhaps the biggest tip I have for perfect looking homemade cornbread stuffing. When you pour the liquid buttery mixture over the cubes of cornbread, do not mix it around too much at all, and be very gentle with the mixing you do.

If your cornbread crumbled, you likely mixed it around too much when you poured the liquid on top of it. To avoid this, simply take your time and evenly pour the liquid mixture all over each cube.

So, what do you do if there’s a cube that doesn’t have a lot of liquid on it? Very gently toss it around with a spoon or other utensil until it looks just like the others. Don’t be too forceful, or you’ll end up with cornbread mush instead of stuffing.

Keep the Cornbread Chunky – I like to cube my cornbread into nearly 1-inch cubes. Perhaps a bit smaller if you prefer, but not by much. The cubes will naturally deteriorate and lose a bit of their size when you pour the aforementioned liquid over them, no matter how careful you are. Therefore, my advice is don’t start with cornbread cubes that are too small.

Herbs – As previously mentioned, I prefer fresh herbs for this holiday side dish recipe. Fresh herbs tend to lend a more pleasing aromatic quality and more authentic holiday-inspired flavor to the stuffing as a whole. However, you can use dried if that’s what you have on hand, or take a mix-and-match approach with fresh and dried. Halve the measurements accordingly.

Milk – I prefer to use whole milk for the thicker consistency and and ultimately a better flavor and mouthfeel from the fat. However, you could use 2% milk or a thicker, more viscous plant-based milk such as cashew milk.

Chicken Broth – Use a lower or reduced sodium option to help prevent your stuffing from tasting overly salty.

If you don’t, the eggs will scramble and you’ll need to start over again. And no one wants to do that – especially when cooking a holiday meal!

Don’t Forget The Foil – For the first 20 minutes of the baking time, the baking dish needs to be covered with aluminum foil. This helps prevent the top from burning before the interior has a chance to fully cook through. Then, remove the foil, and bake uncovered for the last 20 minutes which creates a perfectly golden brown top.

*Use my fast and easy Skillet Cornbread recipe and make a double batch.

**Fresh herbs are strongly recommended but dried may be substituted, noting to halve the quantity of dried. For example 2 tablespoons fresh = 1 tablespoon dried.

Cast Iron Skillet Cornbread — Moist, fluffy, golden brown buttermilk cornbread prepared in a cast iron skillet for a crispy edge. The buttery subtle sweetness makes it a cross between a side dish and a stand-alone comforting snack. Whether you make it for a weeknight family dinner or a holiday celebration, it’s so EASY, ready in 30 minutes, and FOOLPROOF! 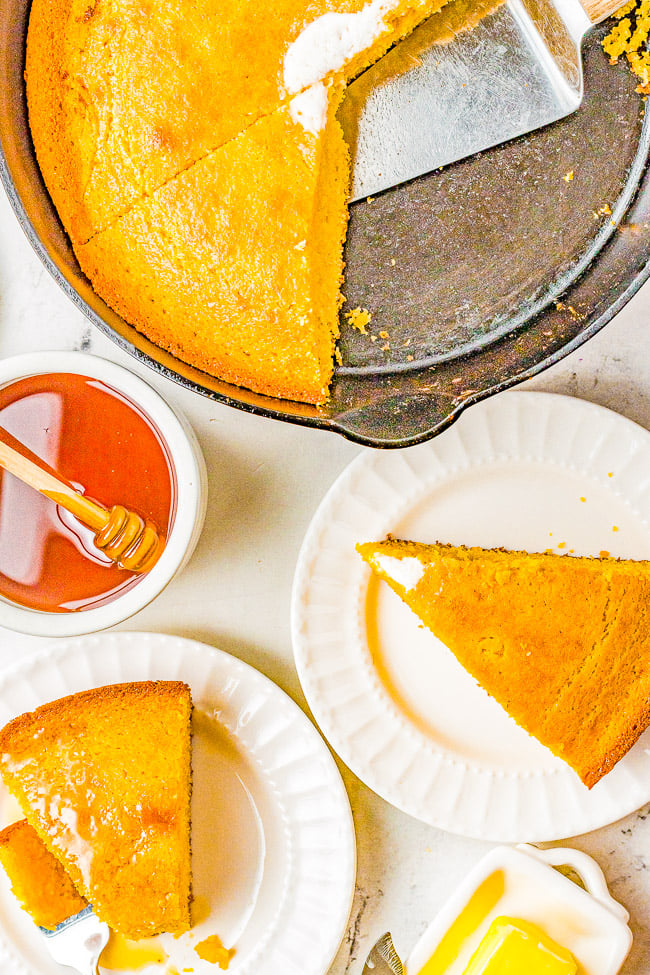 Honey Cornbread Muffins — Between the sour cream, coconut oil, and butter in the batter, it’s impossible to wind up with dry honey cornbread muffins! Serve these at Thanksgiving, or alongside your favorite soups, chilis, and stews. 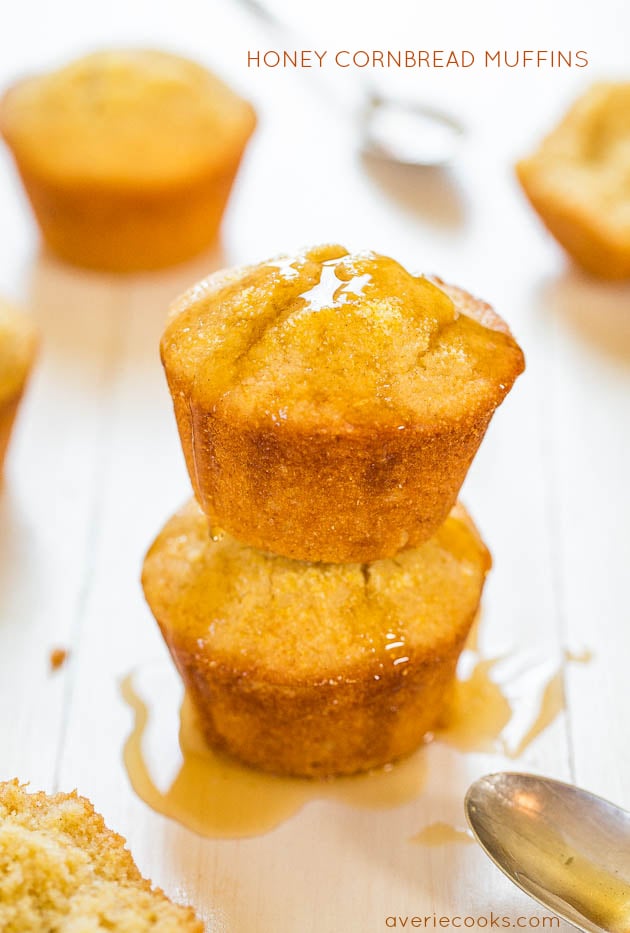 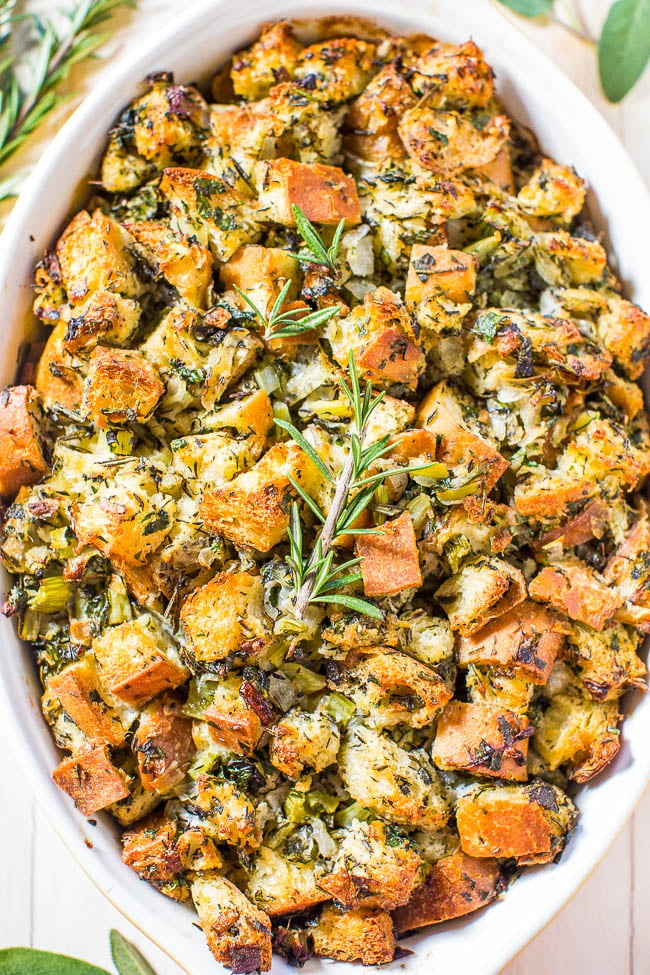 The Best Ever Slow Cooker Sausage Stuffing – This sausage stuffing is super easy to make since the slow cooker does all the hard work for you! There’s no sauteing or browning required at all and you can FREE UP YOUR OVEN!! 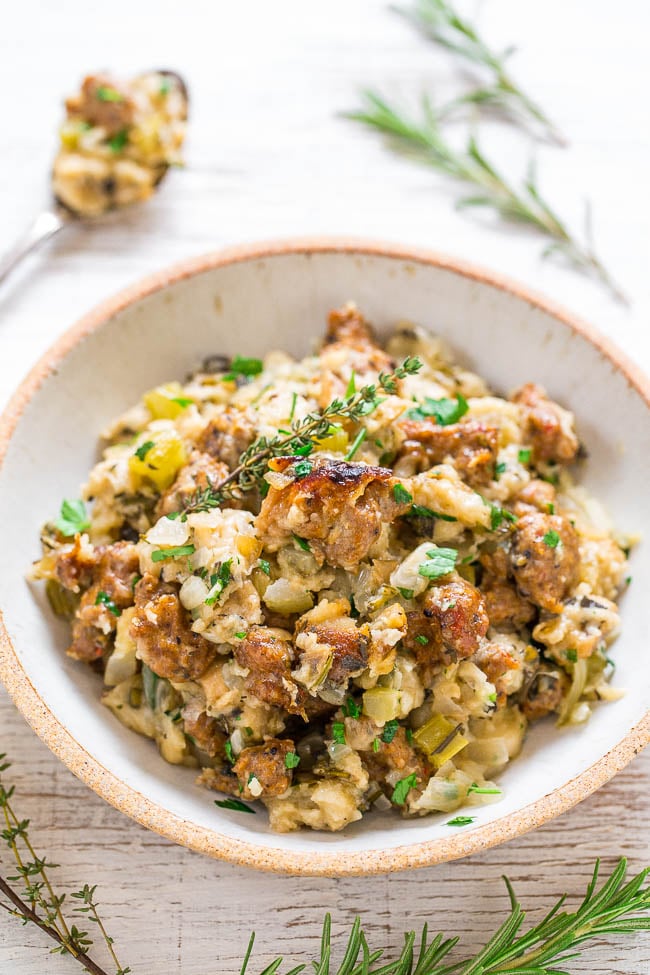 Stovetop Stuffing – With this easy homemade stuffing recipe, you’ll never need a box of the store bought stuff again! Onions, carrots, and celery are sautéed in butter, seasoned with an aromatic bouquet of herbs, and cubed bread is stirred in to create the most perfect stuffing that’s moist and tender! FAST, EASY, and guaranteed to become a Thanksgiving and Christmas family favorite! 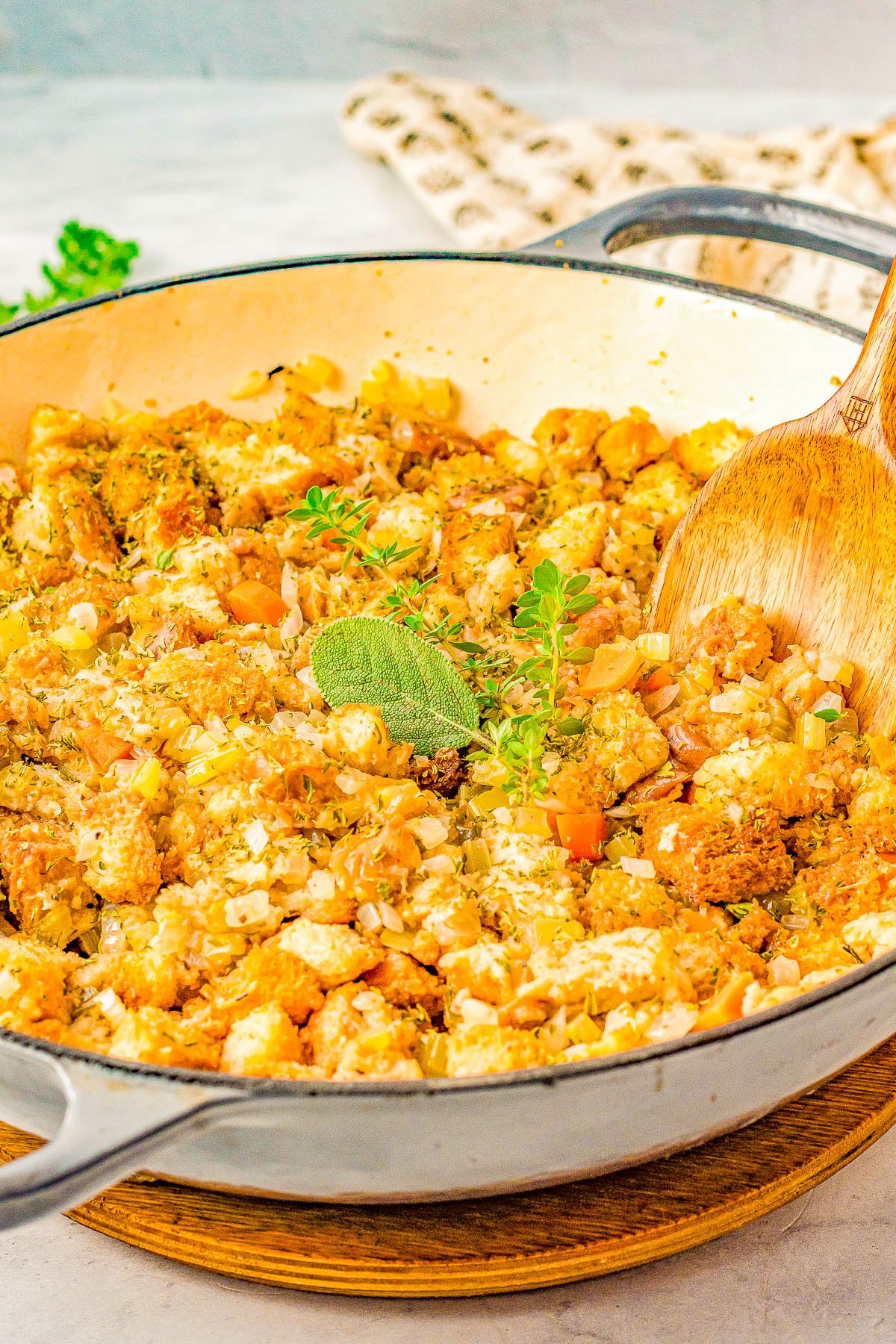