Hawaiian Bread and Maple Banana Baked French Toast – The smell of maple syrup, bananas, and bread baking is almost as good as the way the French toast tastes. 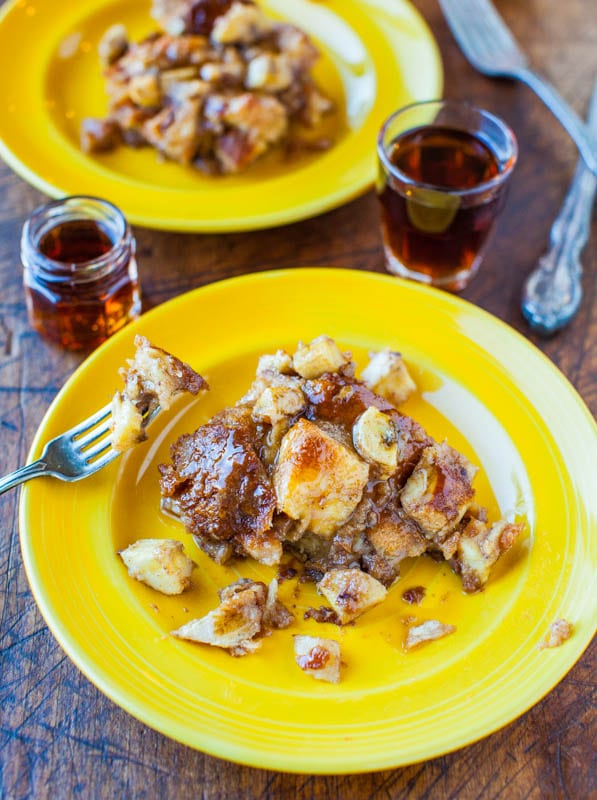 Hawaiian Bread is one of my favorite breads. Lightly sweetened and so light and soft.

And I can now definitively say, it makes stellar French toast.

My grandma used to buy Hawaiian bread and I remember being a kid and pulling off hunks from the round loaves and enjoying the extreme fluffiness. No butter, no jelly, just super soft bread. I used to squish it into bread marbles and toss my marbles into the air and try to catch them in my mouth. I wasn’t ever very successful but the three-second rule applied.

Some people suggest making French toast or bread pudding with stale or at least day-old bread, but I’m not so sure. I dislike anything that’s hard, dry, or tough and starting with something dried out and old doesn’t give me warm and fuzzy feelings. The exception is for overnight breakfast bakes, when using a firmer bread is advantageous so it stands up to an all night marinating session. 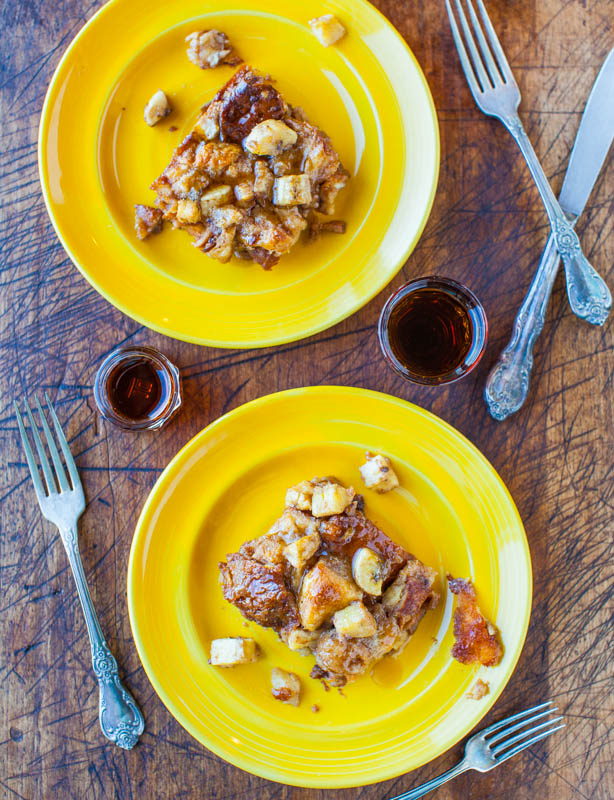 For this French toast, I started out with a soft, fresh 0ne-pound round of King’s Hawaiian Original Sweet Round Bread. I diced it into chunky cubes, one to two inches each. You could tear if that’s faster for you. The soft, tender bread is like a little sponge, perfect for soaking up the sweet, buttery marinade.

To make the marinade, melt one stick of butter, add two eggs, milk, maple syrup, sugars, vanilla, cinnamon, allspice, nutmeg, optional salt, and whisk. I love recipes where you just pile everything into a bowl and whisk it up quickly, and this is that kind. I was happy to keep the egg count to only two. Two eggs in an entire batch of French Toast is pretty impressive and compared to bread pudding, or other baked French toast recipes I’ve seen, some easily approach a half dozen or more.

The milk can be regular, coconut, cashew, almond, soy; or half-and-half or cream if you want to splurge. If you don’t keep certain spices on hand, or would prefer pumpkin pie spice, more cloves or ginger (allspice has traces), feel free to mix and match. Going on the heavier-handed side with the spices is a good idea because this is a pound of neutral-flavored bread, and it needs to be properly spiced so the French toast isn’t bland. 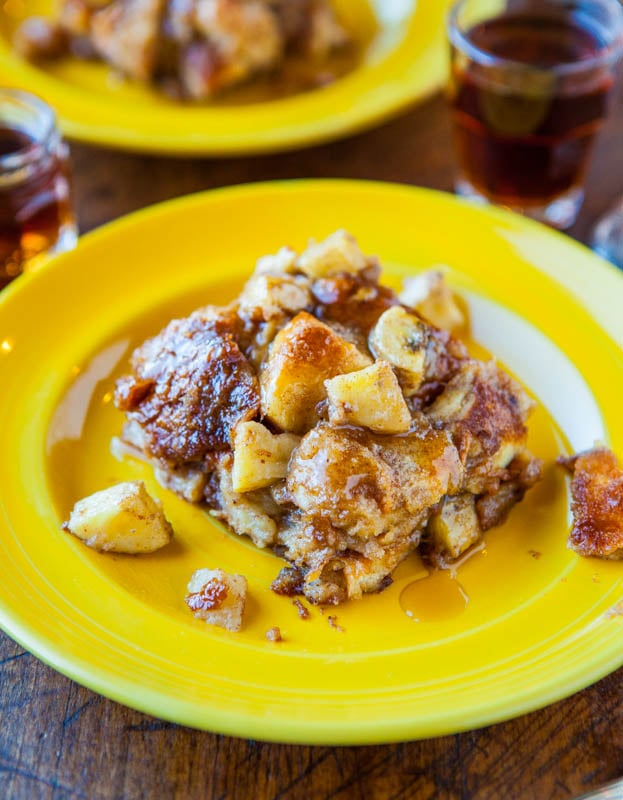 After whisking together the batter mixture, add the sliced bread and diced banana pieces. I diced two medium, ripe bananas into small pieces and folded them in while folding in the bread. At this time, feel free to fold in optional ingredients like raisins, coconut flakes, blueberries (fresh or frozen), or another favorite fruit like diced apples, peaches, or mango.

Toss the bread and bananas gently to coat them evenly before transferring the saucy mixture into a foil-lined prepared pan. It’s amazing that in just a matter of minutes, the bread soaks up all that marinade. It’s very thirsty.

Lightly smooth and press the mixture down into the pan. I don’t compact it (that’s bread pudding) and keep it looser, like pull-apart French toast. However, make sure not to leave any bread corners or pieces jutting up because they’ll be prone to burning. 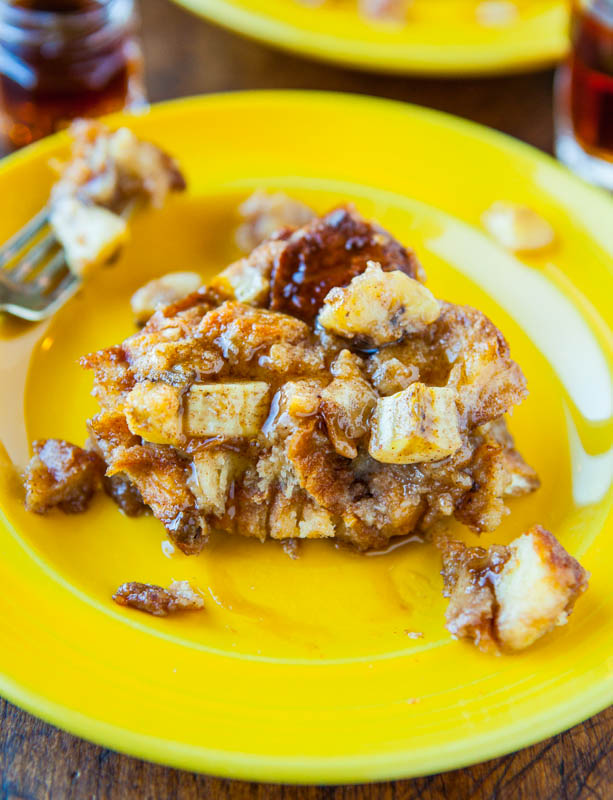 You can make this recipe as a make-ahead/overnight option and place the assembled pan in the refrigerator overnight. However, assembly comes together in literally 5 minutes. If you’re doing it as a make-ahead option, use a crusty, heartier bread that won’t disintegrate overnight, like a French baguette.

Bake for about 30 minutes, or until golden and set. Because the recipe begins using cooked bread and all you’re doing is baking in those comforting flavors, don’t overbake. It’ill firm up as it cools and I prefer to preserve the Hawaiian bread softness. Baking times will vary based on the absorbancy of your bread, oven variance, and personal preference. Making sure it’s set and not sloppy in the middle of the pan is the goal. 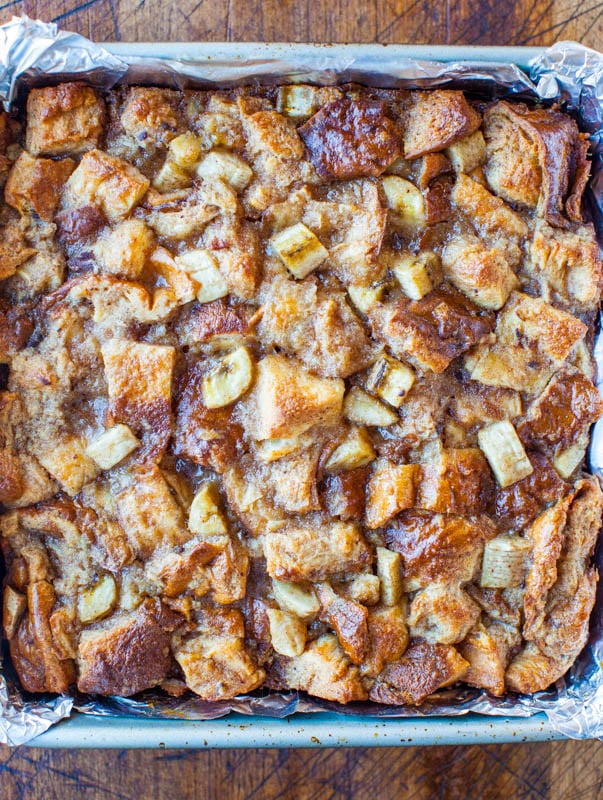 I sliced the French toast into 9 very generous pieces, or just scoop it out with a spoon. I served it with slightly warmed maple syrup and Vanilla Maple Butter, which is heavenly.So many people thought it was orange juice in my last post about it so I didn’t showcase it here in the photos, but it’s highly recommended. I love syrup, and sauces of any kind, and although there’s some baked into it, a little extra on top never hurt. 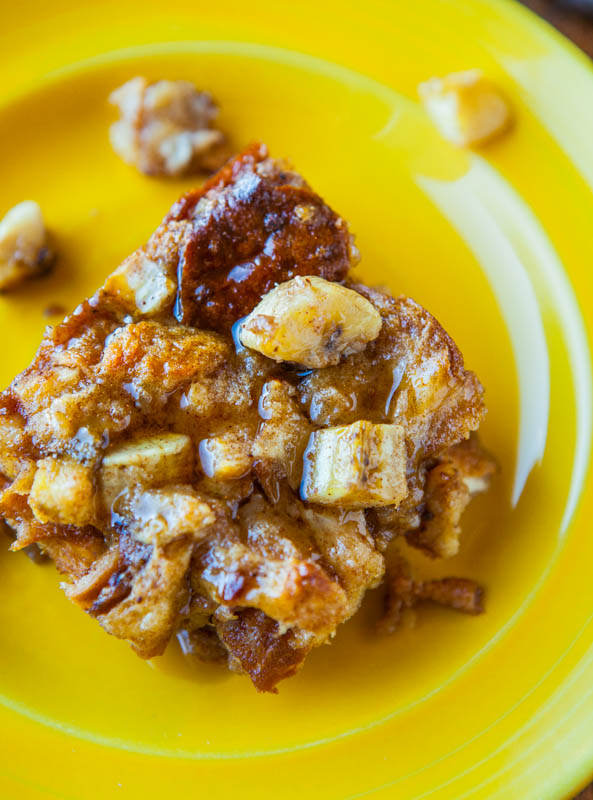 I am not normally much of a breakfast person. Okay, let’s rephrase; I’m not a breakfast in the morning person, but breakfast-for-dinner is great. I served this as brinner (breakfast-for-dinner), along with eggs for Scott and Skylar, and it was met with rave reviews. I sprinkled a little salt on the eggs and on the French toast. That hint of salt, contrasted with the sweet of the maple and the bananas, was the perfect salty-and-sweet vibe. There’s a reason salty bacon, sausage and eggs are served with sweet pancakes and French toast. The combo works.

While baking, the sugars in the marinade caramelized around the edges and on the sides of the bread, adding both flavor and texture. There’s a softly-crusted exterior, while the soft, fluffy Hawaiian bread interior is retained. The maple flavor intensified, and the cinnamon and spices, not only flavor the bread, but perfumed the house while it baked. There is nothing quite like luscious smell of maple syrup, cinnamon, bananas, and bread baking. It’s the holy grail of Good House Smells. 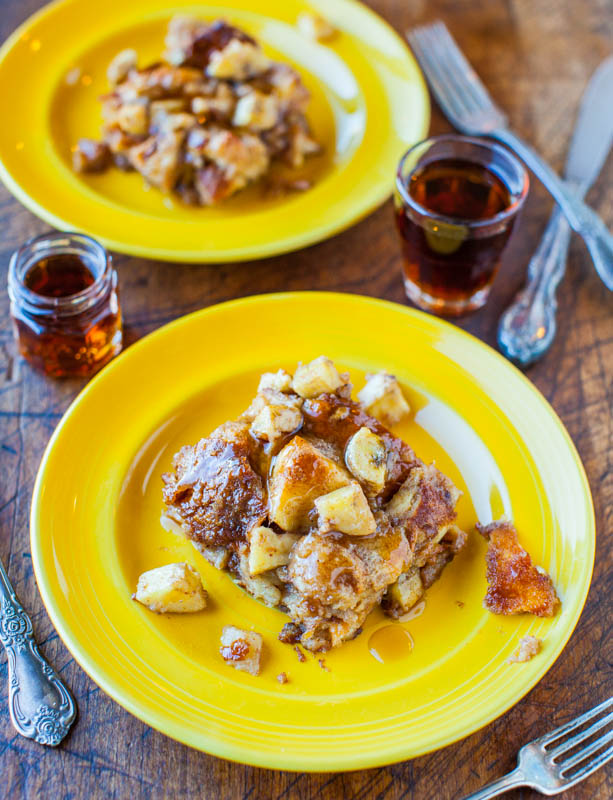 The sweetness of the bananas intensified while baking and their texture morphed into little banana nuggets with much more texture and chewiness. Nothing like what happens to bananas in banana bread where they are soft and mushy.The bananas here were almost like Dehydrated Bananas and remind me of what happens to bananas that are laid to bake on the top of bread, like in this Strawberry Banana Bread or Peanut Butter Banana Bread.

The leftover French toast squares can be kept in an airtight container for up to 5 days, like you’d store muffins, banana bread, or coffee cake. After cooling, I was pleasantly surprised how it turned more bar-like rather than a messy casserole, making it easy to wrap up like a muffin, and toss into lunch pails. The sticky factor diminished as the days passed and the sauciness soaked in. I’m sure it would freeze well, wrapped individually in plasticwrap, like pancakes and loaves of bread freeze well. It would sure beat a frozen Pop-Tart. 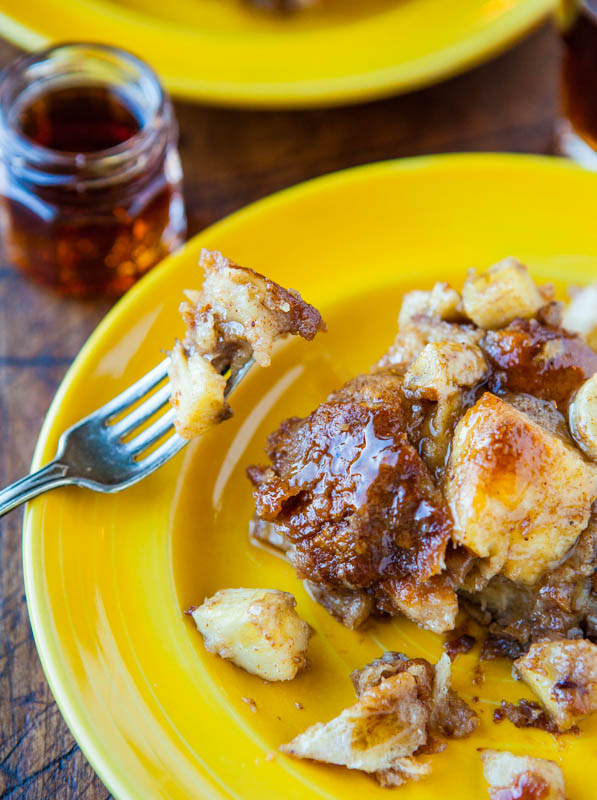 Although it’s filling, it’s not as heavy as you’d imagine, thanks to the lightness of the Hawaiian bread. And it sure is comforting and satisfying. 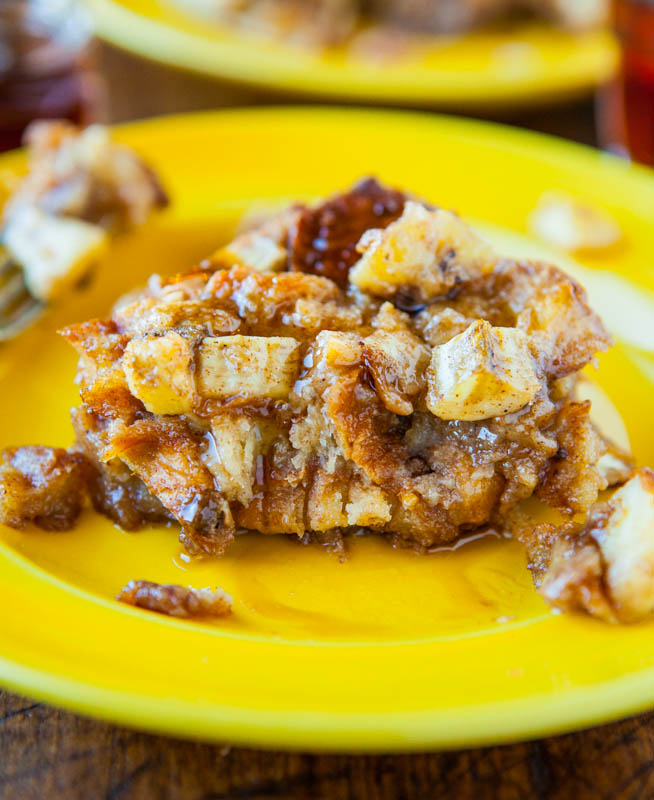 You can use Challah bread as a Hawaiian bread Substitute

If making this as an overnight/make-ahead option, use French bread, a French Baguette, or a crusty and hearty bread that can stand up to overnight soaking without disintegrating

Challah – I cannot say enough good things about this bread. It’s so easy to make, it’s no-knead, you can make it up to 1 week in advance, baking off only what you need at any time. It turns out so soft, fluffy, light, and almost croissant-like. Highly recommended

Overnight Buttermilk Soft and Fluffy Cinnamon Rolls with Cream Cheese Frosting – The softest, fluffiest, and best cinnamon rolls I’ve ever had, with a make-ahead option so you don’t have to get up at 5am to start them

Cinnamon Raisin English Muffin Bread with Cinnamon Sugar Butter – Make your own English muffins in this foolproof, no-knead, easy yeast bread that’s great for beginners and first-time breadmakers. You’ll never go back to storebought English muffins and the worst that can happen is you use the leftovers for French toast 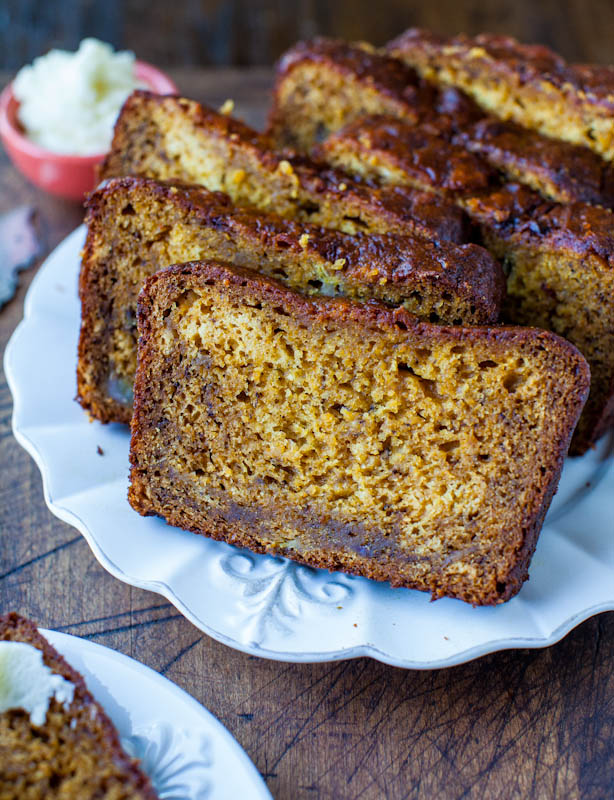 Honey Dinner Rolls – My favorite recipe for dinner rolls. They’re soft, fluffy yet chewy, buttery, and sweetened with honey. Easy to make and always a hit

Brown Sugar Maple Cookies – If you like maple, brown sugar, and rich and warming flavors, these are the soft, dense and chewy cookies for you. No chocolate or peanut butter, just pure maple-brown sugar flavors shining 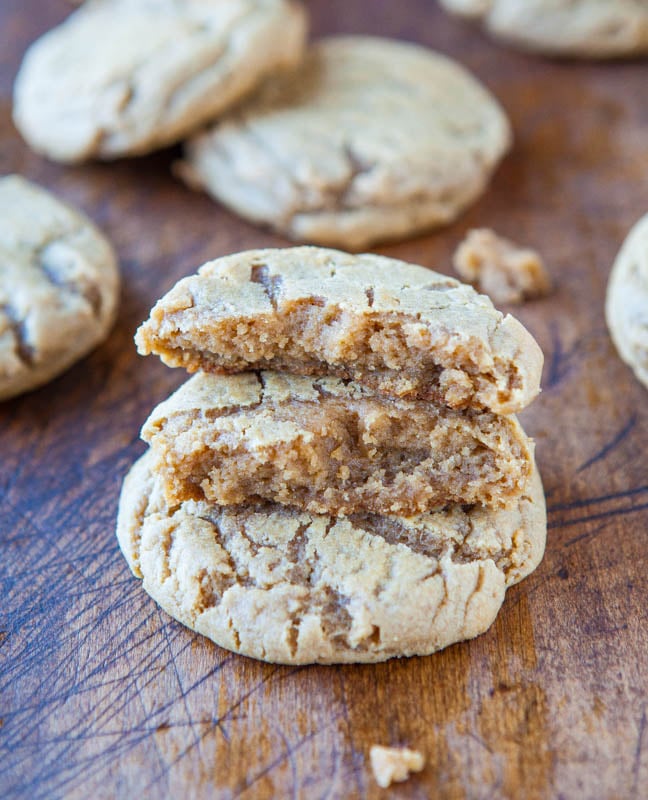 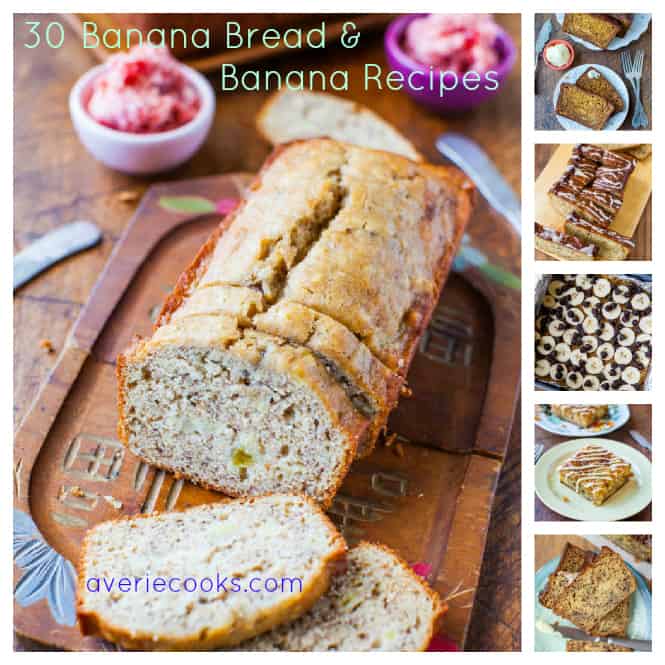 Do you like Hawaiian Bread? French Toast? Banana Bread?