Irish Chocolate Guinness Cupcakes — A tender chocolate cupcake made from scratch with batter that’s spiked with Guinness, along with a hint of Jameson Irish whiskey in the chocolate ganache filling. The cupcakes are frosted with a silky smooth Baileys buttercream frosting!! Not too boozy and not too sweet! 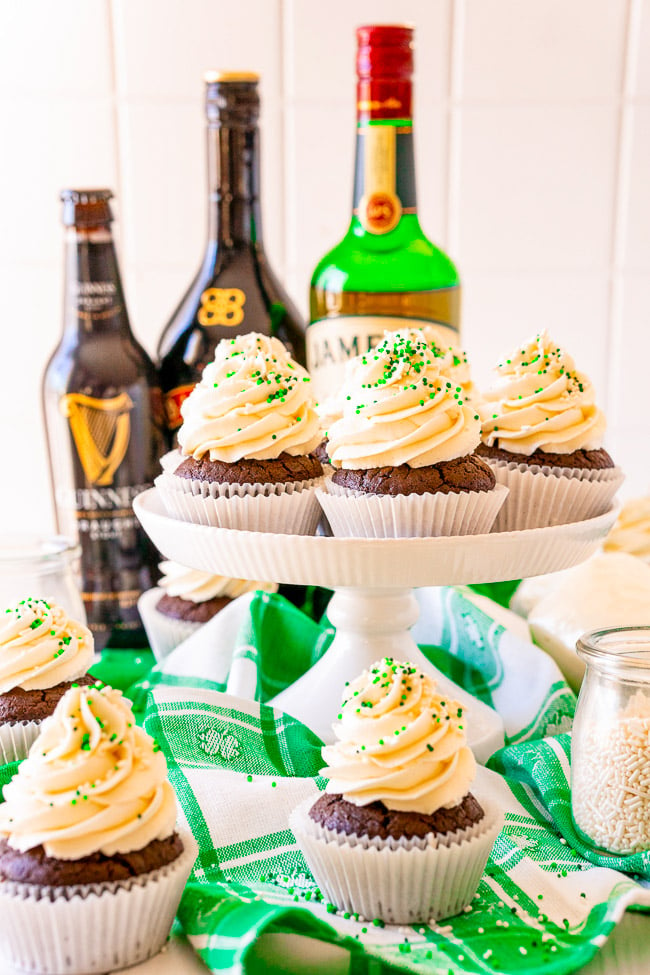 When it comes to impressive St. Patrick’s Day desserts, look no further than these Guinness cupcakes with Baileys frosting! Despite their looks, they’re not too sweet. However, they are definitely rich!

The chocolate cupcake batter is spiked with Guinness beer. After baking and cooling, the cupcakes are spiked with chocolate ganache that has a hint of Jameson Irish whiskey in it.

Finally, the cupcakes are frosted with a silky smooth buttercream that will be right up your alley if you like Baileys since there’s a bit of Baileys in the frosting.

Despite the Guinness, Jameson, and Baileys, the cupcakes aren’t too boozy since we are talking quite modest amounts used, and then divided between 12 cupcakes.

I really appreciate this recipe being on the small batch side of things and making just 12 cupcakes since I really don’t need more than that tempting me! 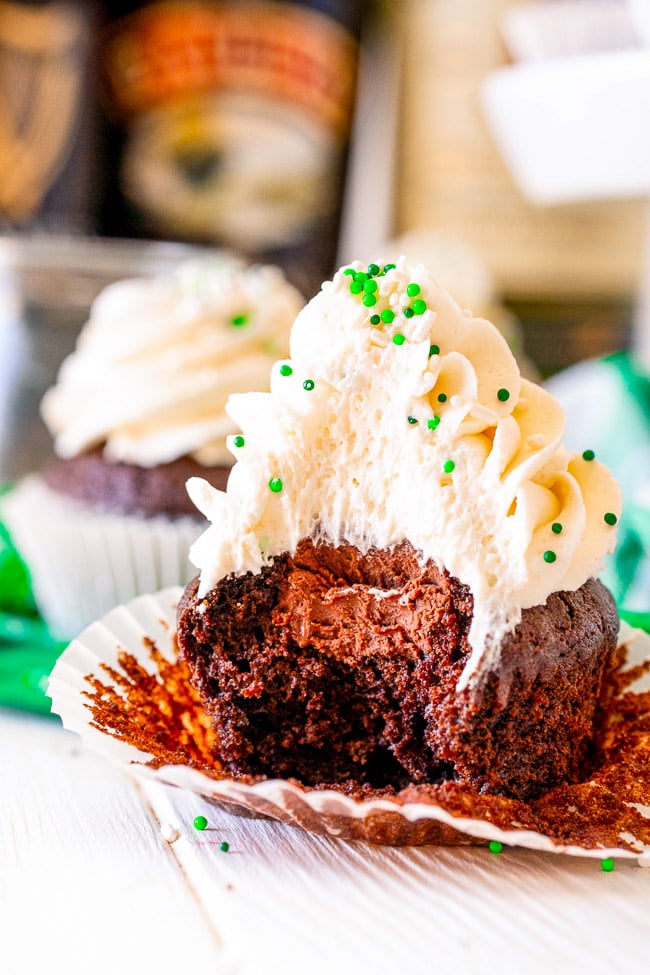 Ingredients in the Chocolate Guinness Cupcakes

For the Guinness cupcakes themselves, you’ll need:

For the chocolate ganache, you will need:

For the Baileys frosting, you’ll need: 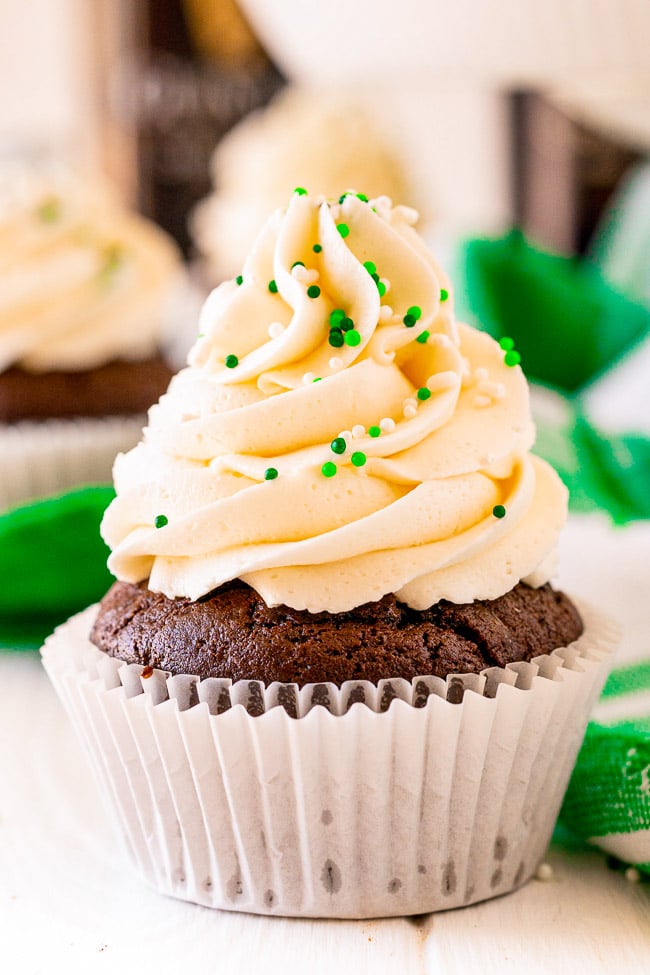 How to Make Guinness Cupcakes

Although these chocolate Guinness cupcakes are from scratch, they are easier than you think thanks to the whisk-together cupcake batter that’s as simple as combining the dry ingredients in one bowl, and in a separate bowl whisking together the sugar and eggs before adding the remaining wet ingredients.

Add wet to dry, delicately mix, fill the cavities of your cupcake pan, and then bake them off. 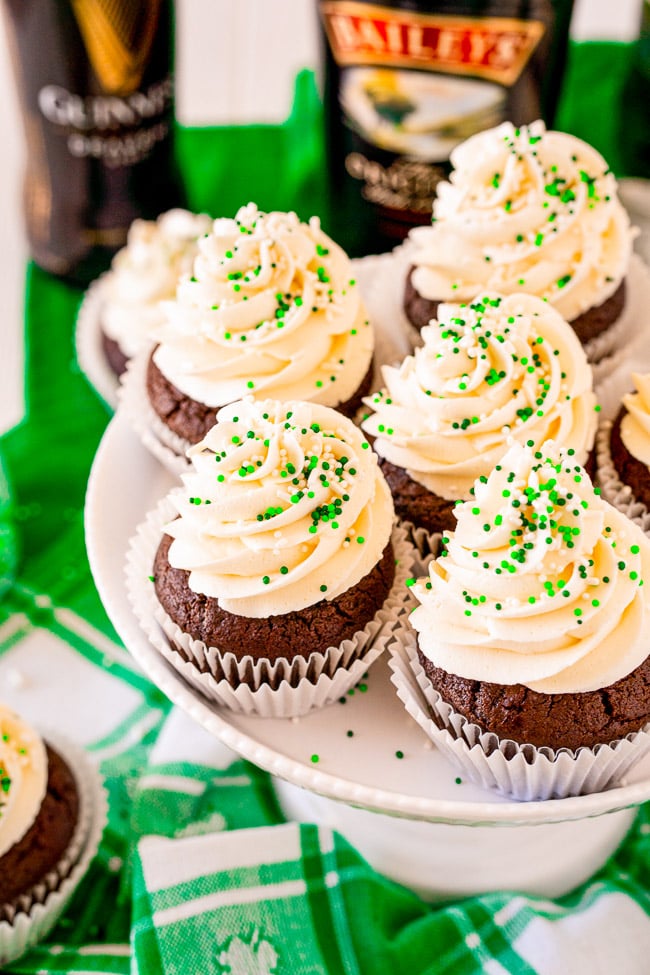 After 5 minutes, stir the mixture together, and add the Baileys. Allow this rich ganache to cool for 15 to 30 minutes. This is what you’re going to fill the cupcakes with.

After the cupcakes have baked and cooled, you’re going to need to core the cupcakes. I used this cupcake corer because it keeps things much neater but you can also core them with a paring knife.

Then fill your cored cupcakes with the chocolate ganache. 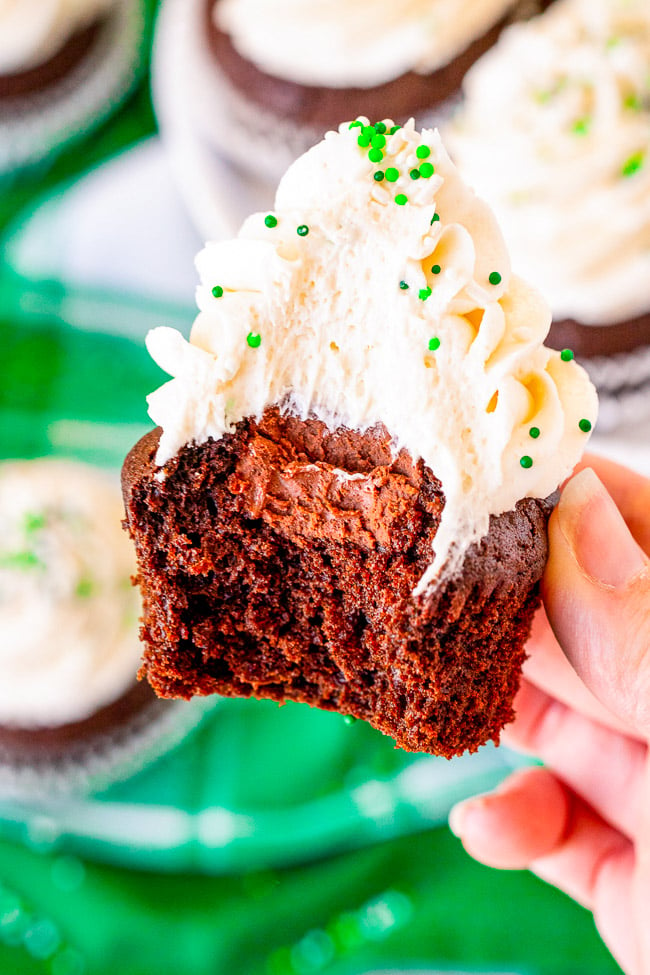 You’ll definitely need to frost your Irish Chocolate Cupcakes because after coring them and filling them with the ganache, they may not look very neat, but have no fear because frosting covers it all up!

Cream together the butter and with half the confectioners sugar. Add the other half of the sugar with the Baileys and a pinch of salt and beat on high speed until light and fluffy.

Pipe the frosting onto the filled cupcakes and top with festive sprinkles. 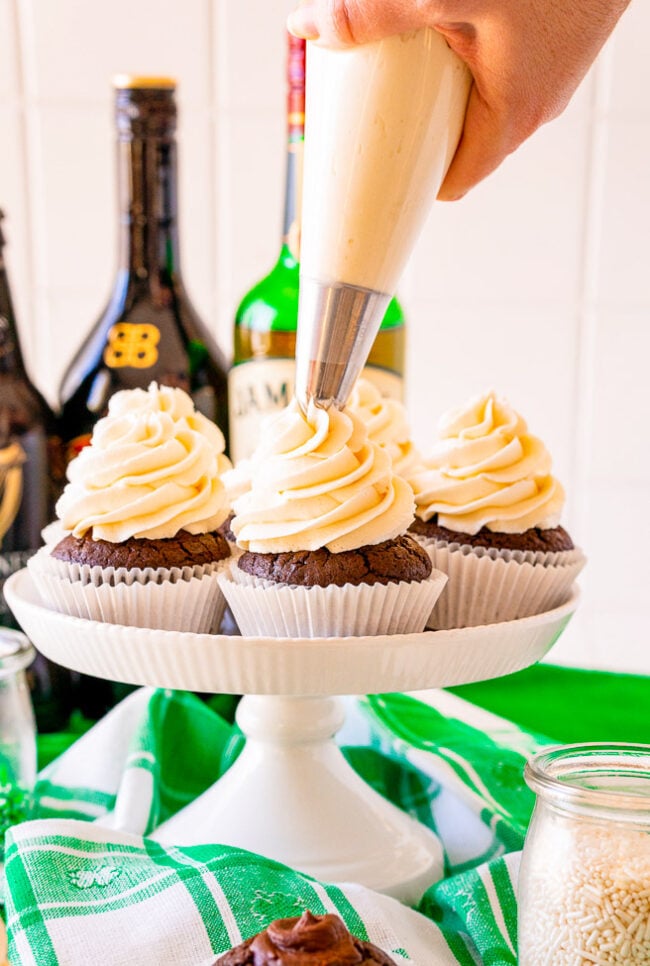 Can I Make Irish Cupcakes Without Alcohol?

Theoretically, you probably could make these St. Patrick’s Day cupcakes sans alcohol; but at that point they aren’t how I made them so I cannot say for sure how they will turn out.

The ganache and the frosting are easy to keep alcohol free — just omit the alcohol in both places and use a splash of cream in the same quantities as called for in the recipe. One-half tablespoon, and two ounces, respectively of the Jameson and Baileys.

It’s a bit harder to get around the Guinness in the batter since it’s one-half cup. Plus it will react with the baking powder and baking soda to help the cupcakes rise. You can’t just omit it.

You could try using a dark non-alcoholic beer and see how they work. I haven’t tried.

Also, and opinions do vary on this, but in my opinion the alcohol content of the Guinness will burn off during the baking process, rendering these nearly alcohol-free, especially if you replace the Jameson and Baileys with cream as suggested above so you can achieve the proper consistencies and textures. 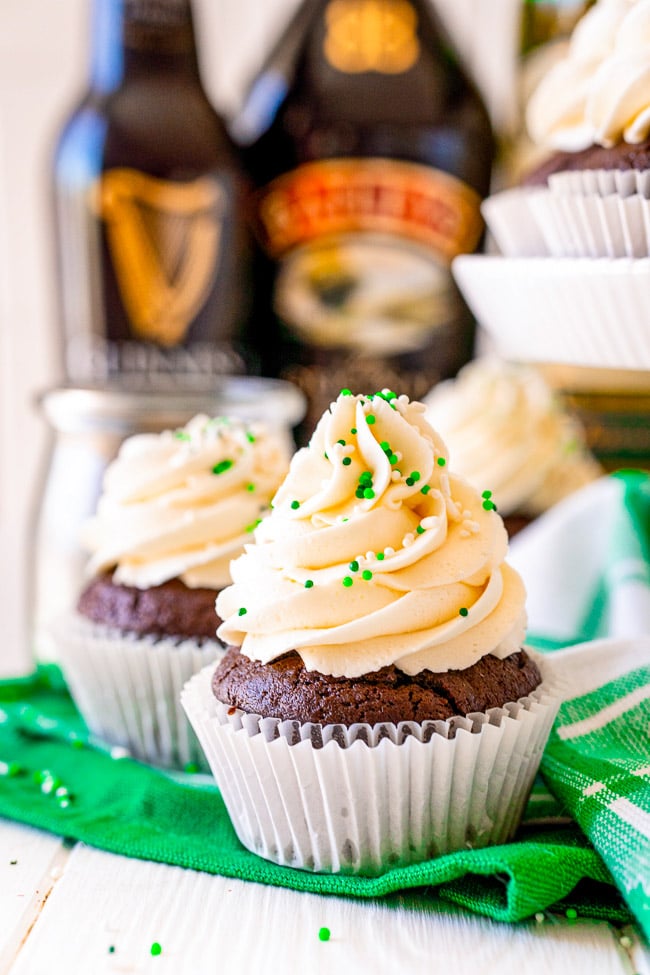 What Piping Tip Do You Recommend?

I used this Ateco Extra Large Closed Star Piping Tip but you can use another piping tip of your choice. 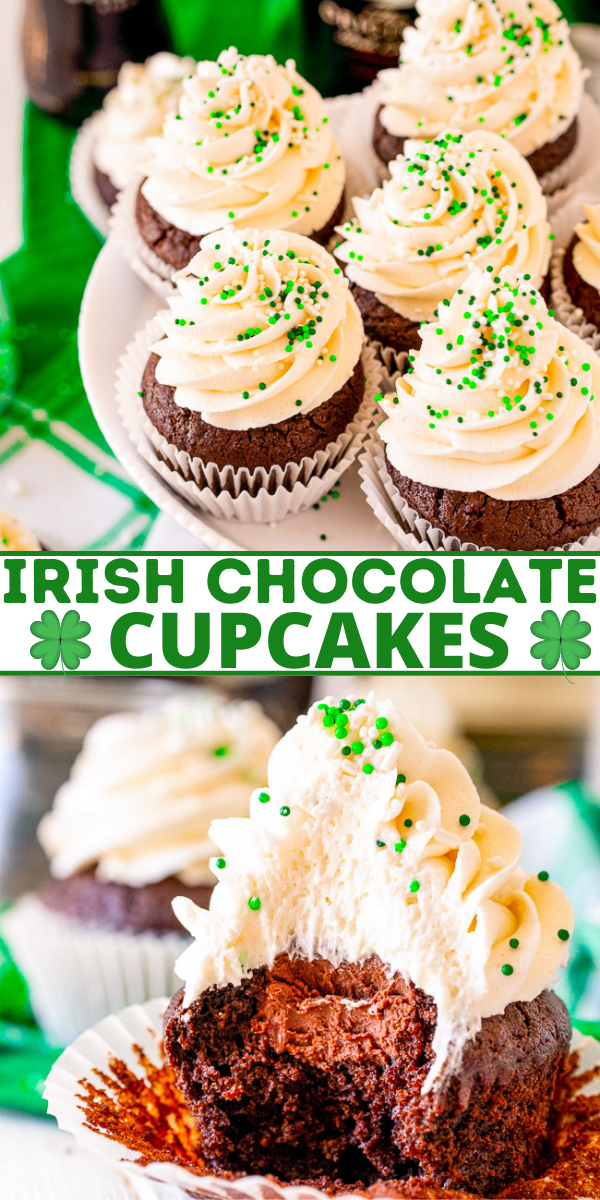 Can the Cupcakes Be Made in Advance?

Yes! The Guinness cupcakes can be baked up to one day in advance, and then filled and frosted in case you don’t want to tackle it all on the same day. 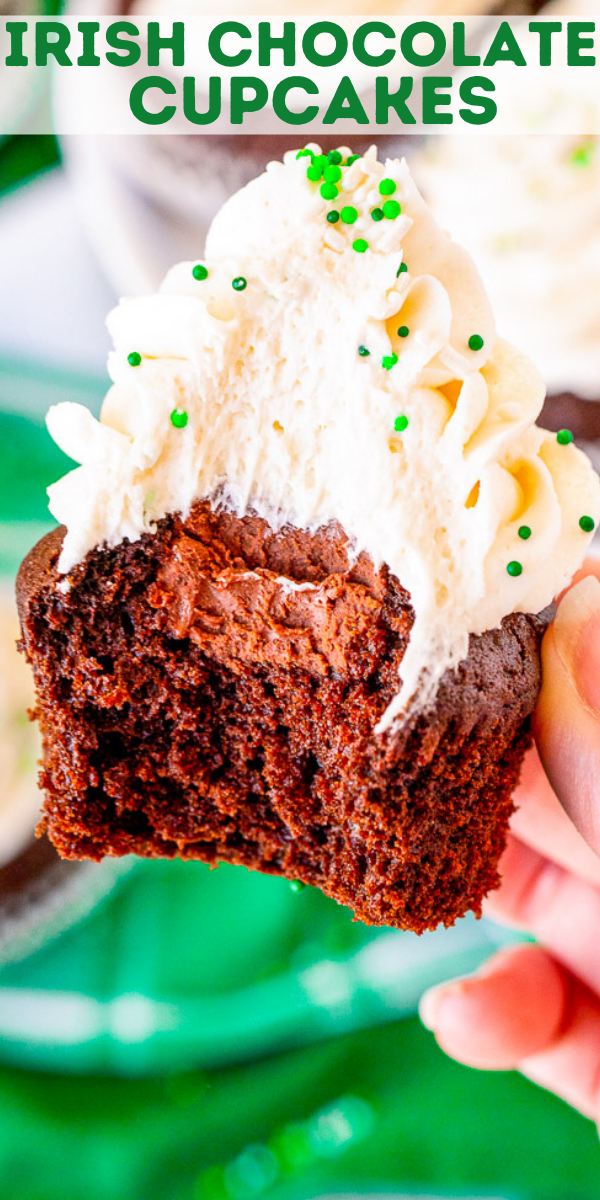 *Do not use another kind of cream other than heavy cream or the ganache will not set up properly, i.e. do not use half-and-half nor regular cream. Use heavy cream or what is sometimes called (double) whipping cream.

*I used Trader Joe's Dark Chocolate Pound Plus Bar. The 72% also would be fine. I caution against using chocolate chips because they do not melt as easily and you could run into problems.

*I used this Ateco Extra Large Closed Star Piping Tip but you can use another piping tip of your choice.

Triple Layer Fudgy Mint Oreo Brownies — Fudgy, minty brownies with a mint marshmallow creme and tons of Mint Oreos both baked in and sprinkled on top! 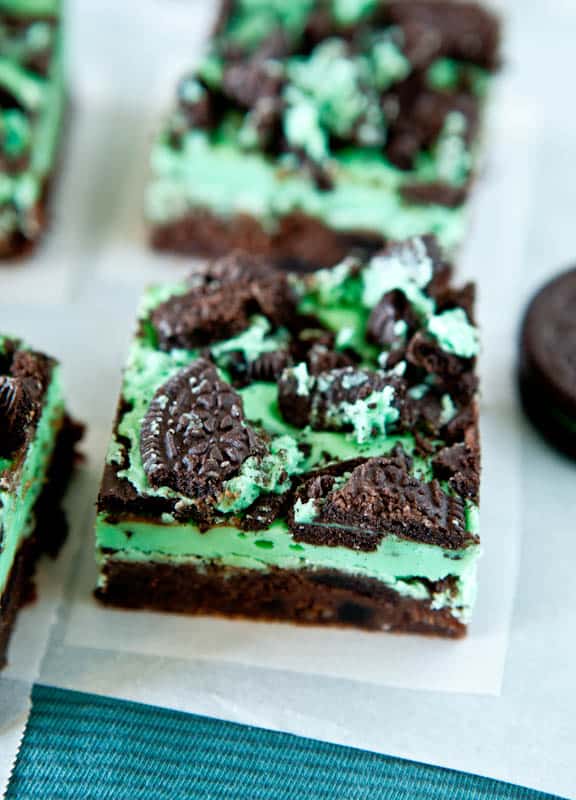 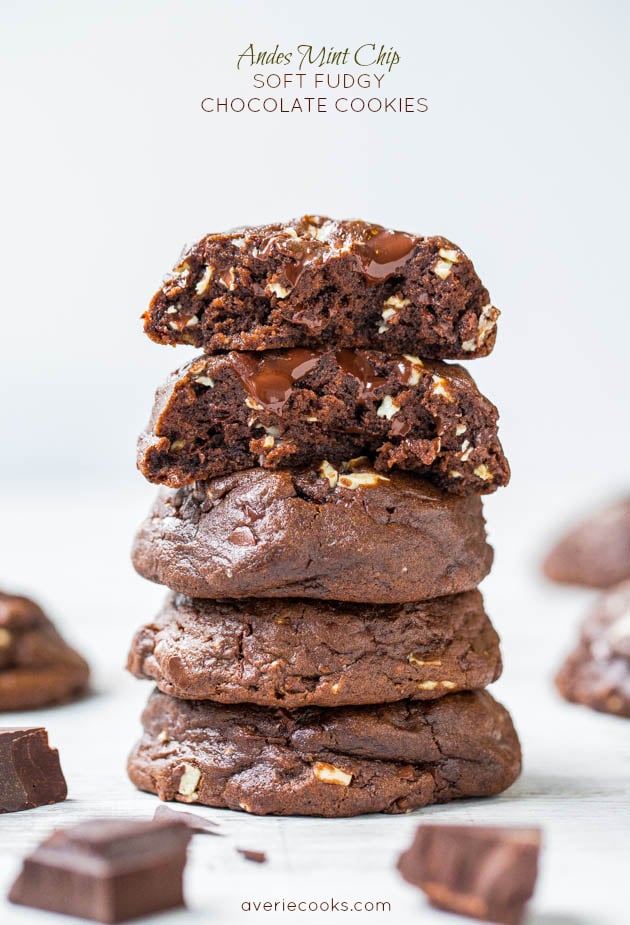 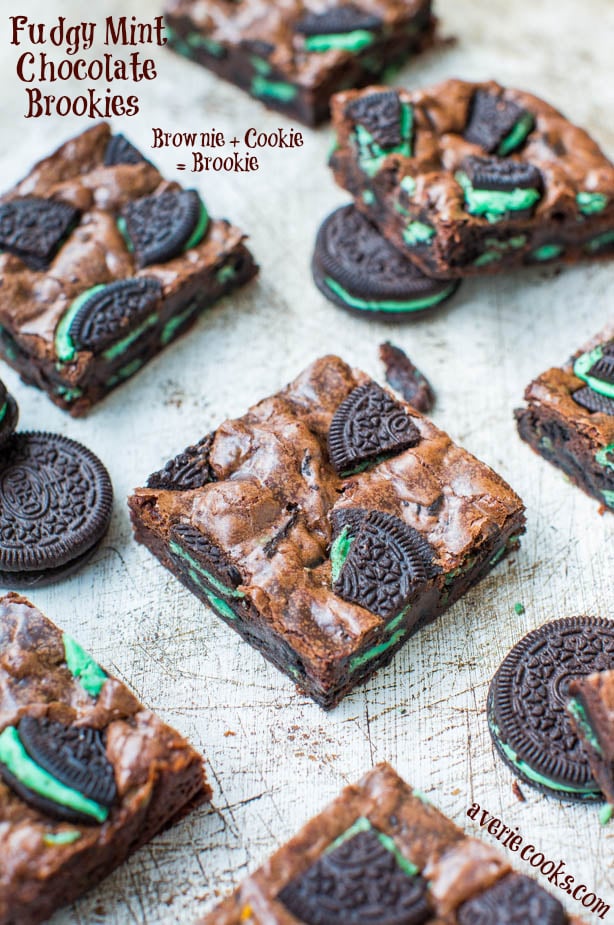 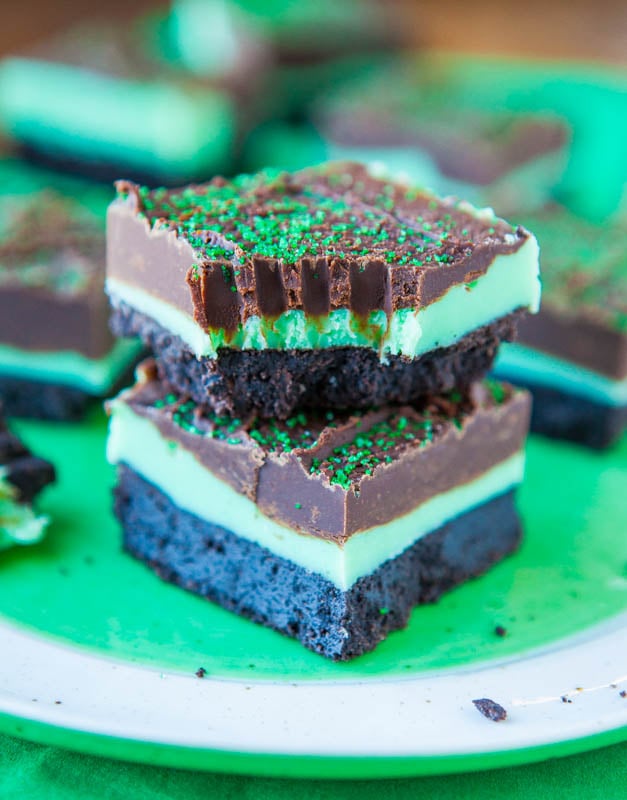 Creme de Menthe Bars – They’re almost no-bake, and although they’re a three-layer bar, they’re easy. They’re minty, but not overpowering. They’re not super sweet, nor are they intensely chocolaty. 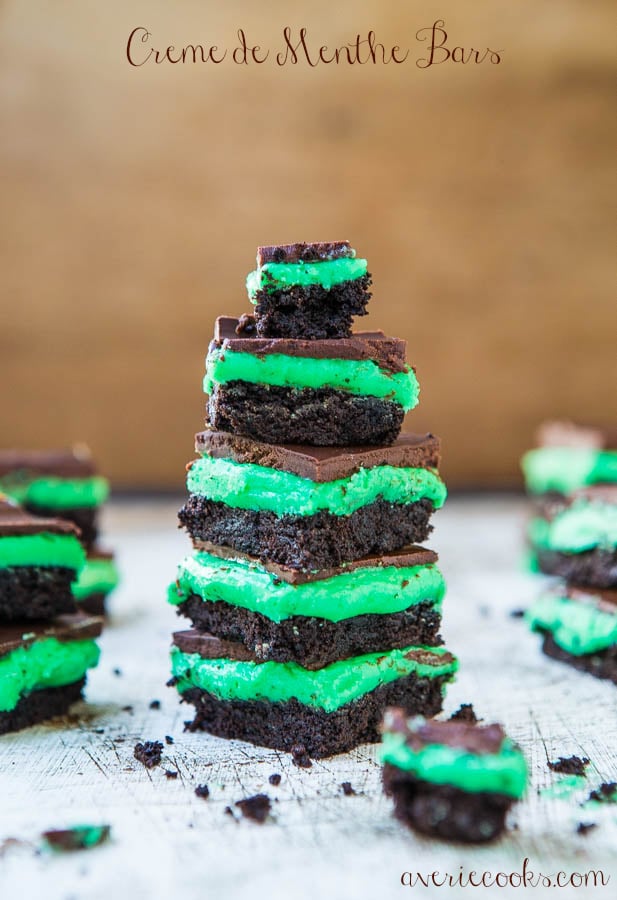 Frozen Irish Mudslide – These frozen mudslides are decadent dessert-like drinks made with three types of alcohol – Irish whiskey, Baileys Irish Cream, and Kahlua – for a slightly boozy milkshake with an abundance of chocolate syrup! Perfect for St. Patrick’s Day or a warm weather treat to cool you down! 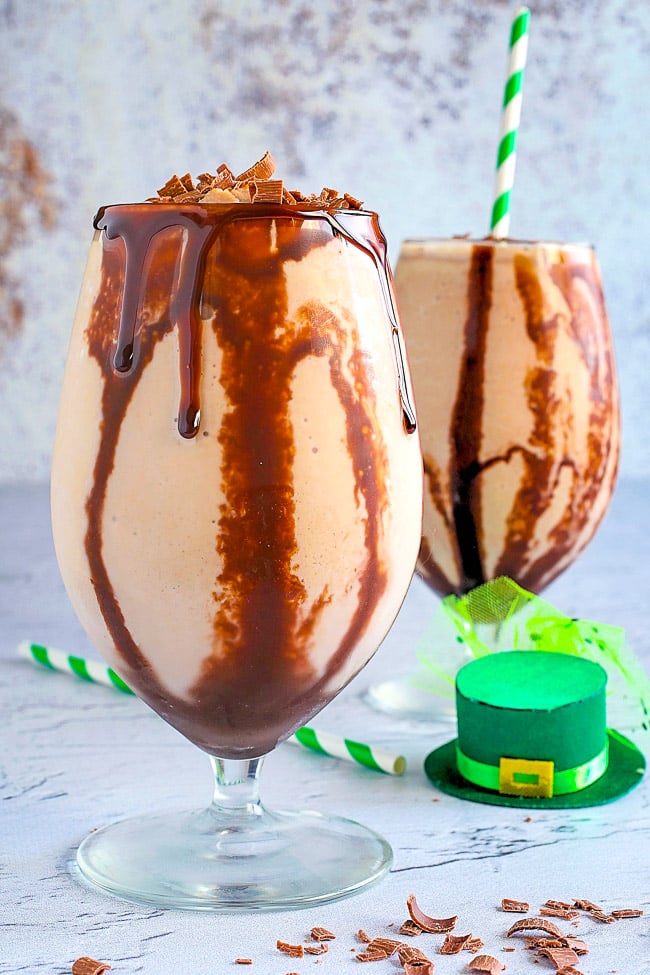