Around this time every year I get the urge to turn on my oven, let the kitchen get nice and toasty, and roast up some vegetables.

Then I got the urge to blend them up into soup.

Courtesy of urban living, we don’t have a grill and there are times I really miss the bite and sharpness that grilled food possesses. I tried to duplicate the smoky quality of grilled vegetables by roasting carrots and red peppers in the oven until they were very well done and my strategy paid off.

The resulting soup was rich, smoky, and had some of the charcoal-infused flavor I wanted without tasting like I just ate a lump of coal.

I began by roasting one pound of carrots. I used to think one pound sounded like a lot but it’s really just about 10 average-sized carrots and one pound fits on one baking tray. By the time they’re peeled, trimmed, and diced into one-and-a-half-inch chunks, and because they shrivel dramatically while baking, one pound turns out to be less than you think.

Before their journey into the hot oven, I drizzled them with a touch of olive oil, and generously sprinkled with Kosher salt and black pepper. Allowing the carrots to caramelize very well, and roasting them just to the edge of what some would call burnt, is actually desirable for soup-making because it provides the finished soup with body and depth of flavor. If vegetables are only lightly roasted, the flavor gets lost and at that point, you may as well just steam them in the microwave because it’s a lot quicker. 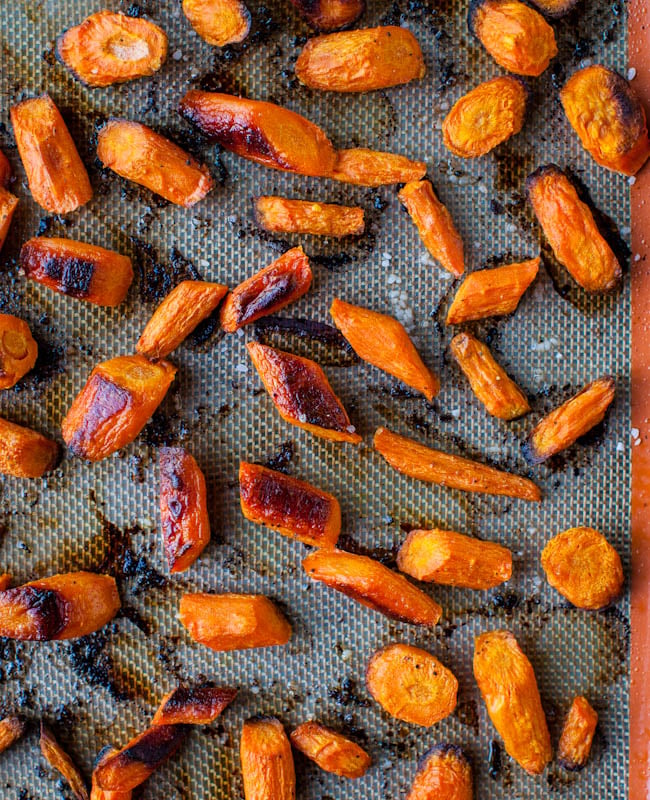 While the carrots roasted on one tray, I roasted a ginormous red pepper on another. I found the super-sized specimen at Trader Joe’s, but if your pepper options are smaller, I’d roast two. When roasting peppers, be mindful that they shrivel very dramatically due to their high water content.

Do not make the mistake of trimming the pepper too small or you’ll end up with blackened bits of charcoal and burnt red skin laying on the baking sheet and wonder where the pepper you put into the oven went. For the average-sized pepper, slice it into no more than four to six pieces. Mine was huge and seven slices took up a whole baking tray before roasting but emerged from the oven taking up less than half the surface area of the tray. 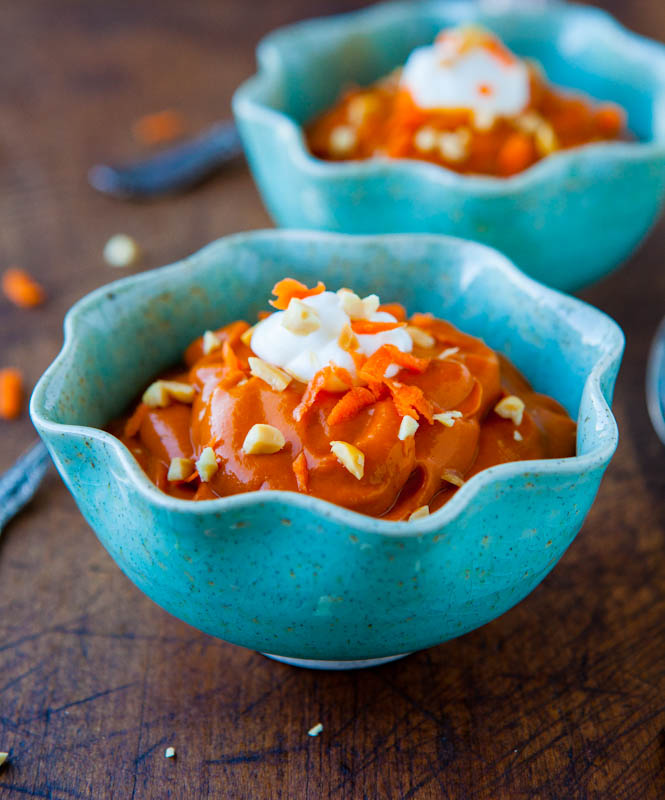 I didn’t flip the vegetables midway through roasting for a variety of reasons. First, I claim laziness. I really didn’t want to painstakingly flip over 67 little carrot pieces with a tongs. Secondly, I wanted one side of them to get pretty blackened for the flavor aspect. And lastly, I got distracted while they were roasting and realized after the halfway point had passed that I’d just continue folding my laundry rather than flipping carrots and peppers.

After the vegetables emerge from the oven, put them into a Vita-Mix, blender, or food processor, along with one can of coconut milk, and about one-half cup of peanuts or about one-quarter cup peanut butter and blend. The soup would have been fine coarsely pureed and with some texture to it, by just pulsing it in a food processor or lightly going after it with an immersion blender, but because I put it into the Vita-Mix, sooner rather than later I had an incredibly smooth puree. 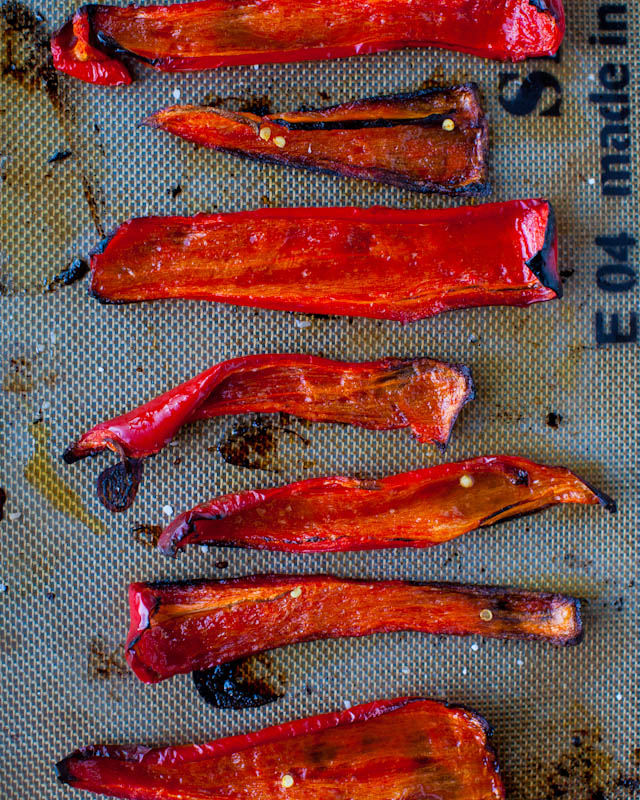 The flavor of this soup is just so layered and chock full of dimension. First, the caramelized carrots add a touch of sweetness while the peppers add a little heat and smokiness.

The coconut milk adds a creaminess, and in conjunction with the residual olive oil that engulfs the roasted vegetables, you’re left with a soup with some meat on it’s vegan bones. However, for those who aren’t huge fans of coconut-flavored food, not to worry because that flavor of all is the least distinct.

However, the peanuts or peanut butter flavor is quite distinct and once added, the pop of nuttiness cannot be un-done. I love peanut butter, but you may wish to add it or the peanuts slowly just to make sure you like that flavor note; or try almond butter or sunflower seed butter. I love the creaminess and richness from peanut butter and it was welcomed with open arms. And open mouths. 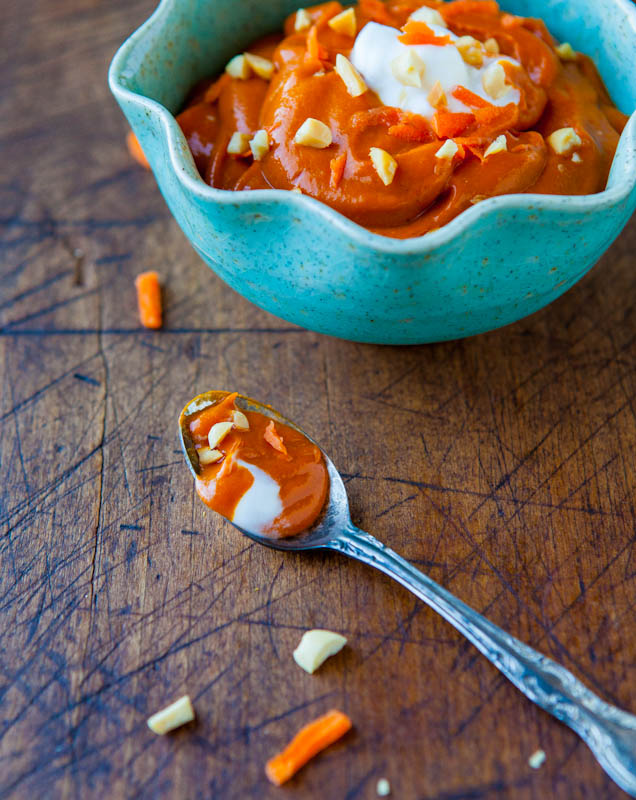 I didn’t season the soup with additional salt, pepper, or spices, other than the sprinkle that was added to the vegetables before roasting. However, seasoning with anything from cayenne pepper to cinnamon to nutmeg to garlic to curry is possible. The options are vast and the seasonings can easily be customized to taste.

While blending, I added a tablespoon of agave and its clean sweetness counter-balanced the smokiness and earthiness from the roasted vegetables. Depending on how well-done your vegetables are, this may or may not be needed. A dash of maple syrup would also be lovely. 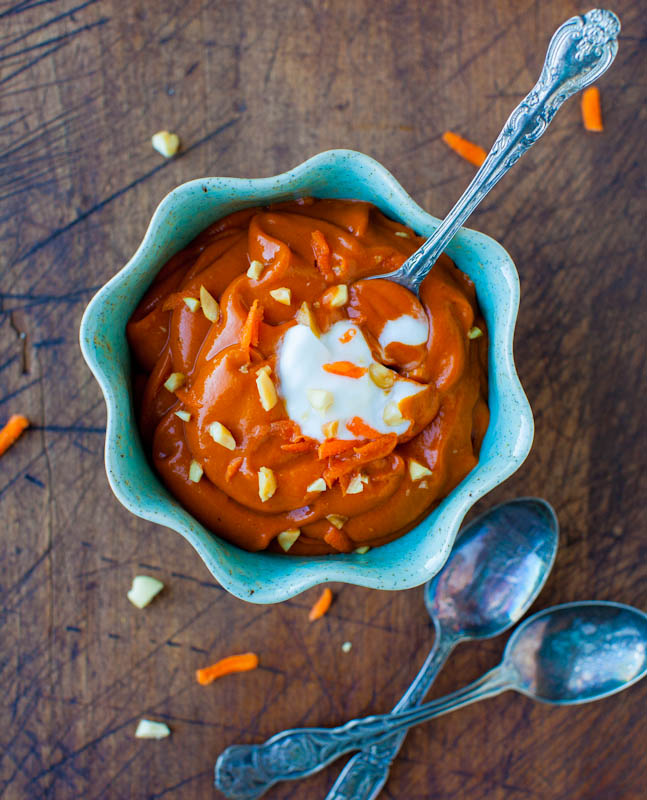 Garnished with vegan sour cream, peanuts, and carrots, this soup was hearty without being stuffing in that lobster bisque or potato chowder kind of way. The beauty of vegan, gluten-free, soy-free, and almost salt-free food is that I feel satisfied, not stuffed, after eating and I’m also not guzzling water for five days to counteract the sodium onslaught that I find is the case with most commercially-prepared soup.

The batch makes about 24 ounces, or about six generous bowls and so there are leftovers to a point, without making a ridiculous amount so not to worry that you’ll be eating the same thing for days and days. Then again, soup freezes very well, too.

This hit the spot so well though that I wouldn’t have minded more leftovers. 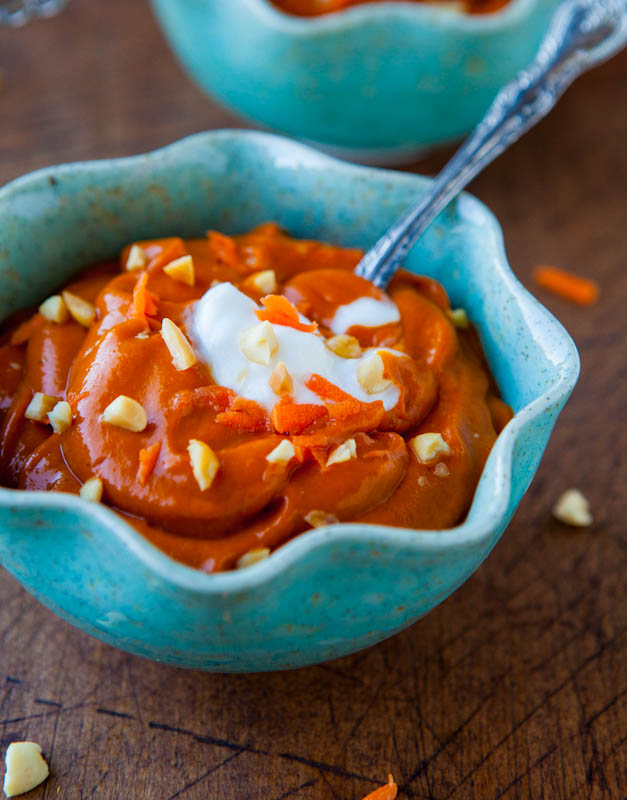 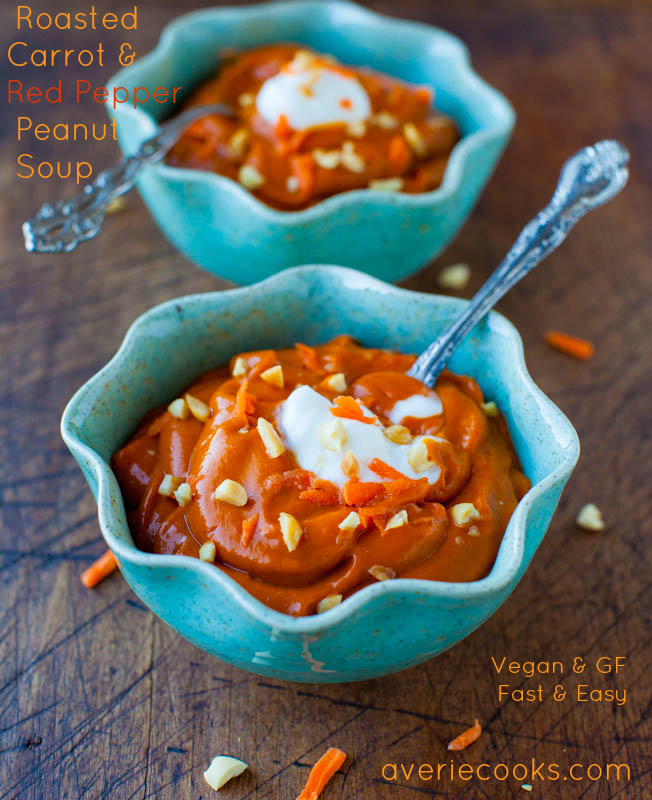 Roasted Sweet Potato Red Pepper and Coconut Milk Soup – The sweet potato soup inspired the carrot soup, and rather than steaming sweet potatoes and using raw peppers, oven-roasted carrots and peppers are used. The two are quite similar, but roasting the vegetables gives the carrot soup a depth of flavor that you just can’t get with steaming in the microwave, but if you’re short on time (or even if you’re not) the sweet potato soup is excellent. Between the two, I can’t pick a favorite

Double Cheese and Red Pepper Dip – I wish this dip was soup, that way I could eat it by the spoonful 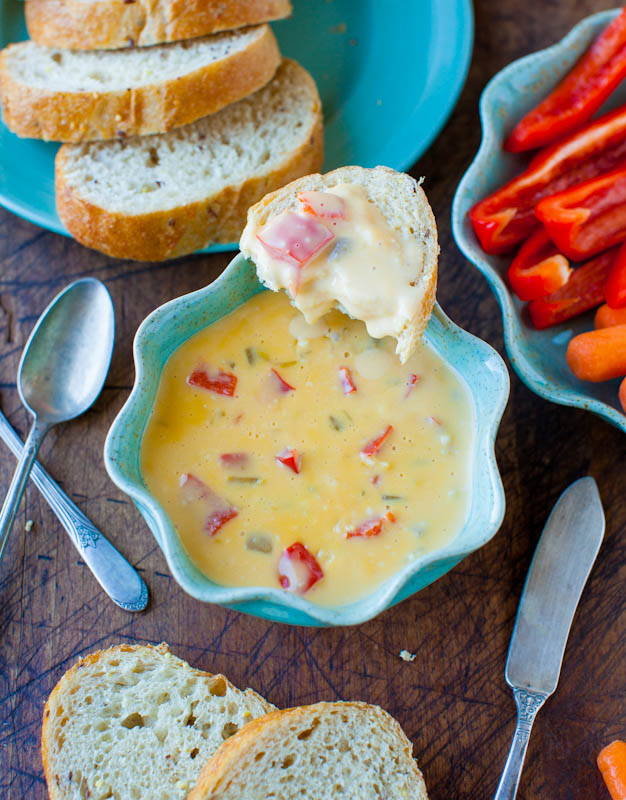 Roasted Peanut Butter Coconut Ginger Carrots (vegan, GF) – Carrots are bathed in coconut oil, peanut butter, and ginger before being roasted. The outsides crisp up and the interiors remain tender. The photos don’t do these justice 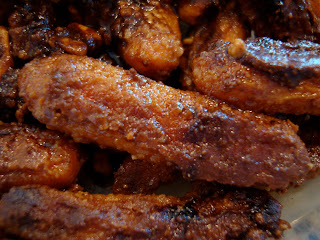 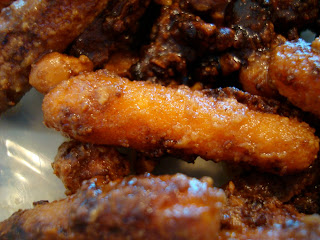 “Spicy Doritos” Cheezy Dip (no-bake, vegan, GF) – Red peppers play a starring role in helping me honor my childhood love of Doritos (really the Doritos coating is what I adore) with this easy 30 second dip 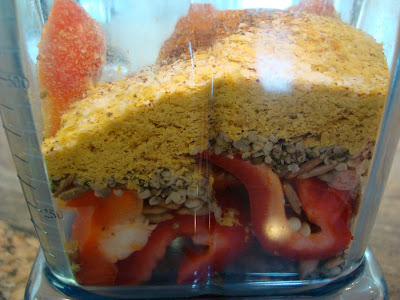 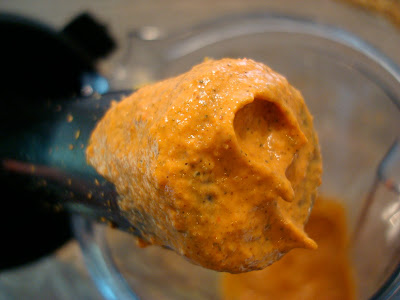 Peanut Noodles with Mixed Vegetables and Peanut Sauce (vegan, GF) – If  you like the flavor of peanuts in your savory dish, this meal comes together in 5 minutes flat. Easy, vegan, full of peanuts, red peppers, fresh vegetables and everything tastes better when drenched with easy homemade peanut sauce 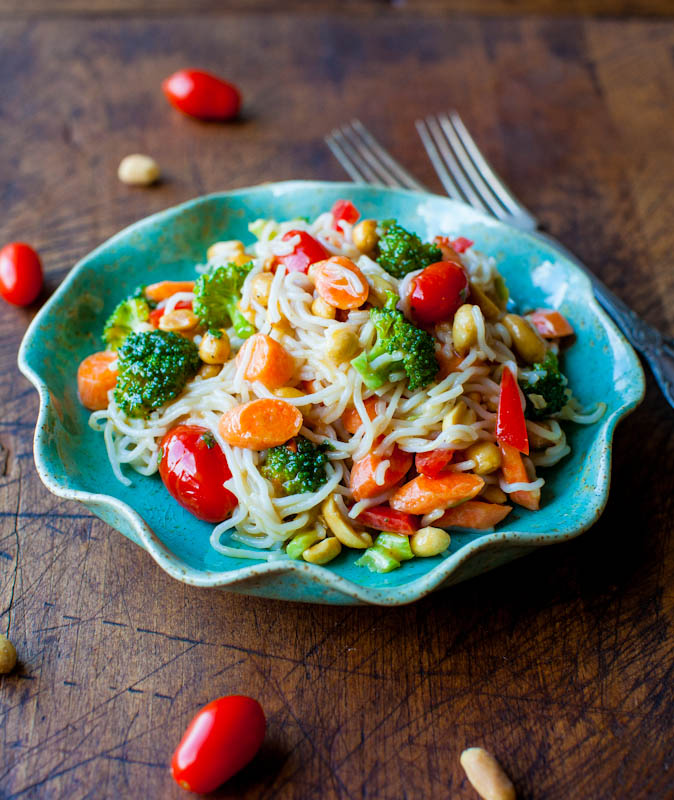 Do you have a favorite soup recipe or favorite roasted vegetable recipe?

Feel free to link up your favorites.

Thanks for the Pumpkin Whoopie Pies + Book Giveaway entries

Posted in: All Recipes, Soup