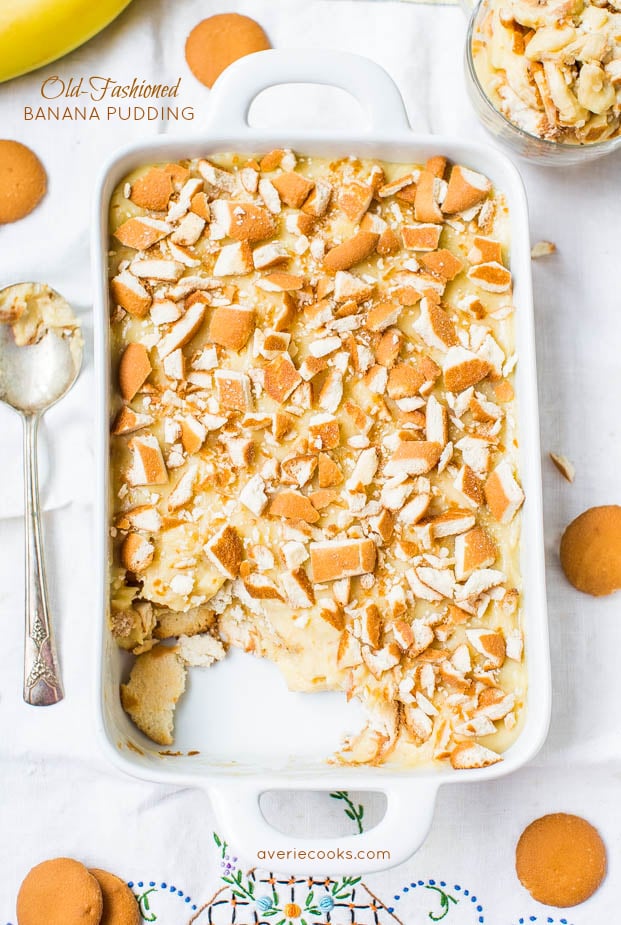 I recently had a craving for banana pudding. I don’t know why banana pudding of all things popped into my head, but I couldn’t stop thinking about it.

So I had to make it. Plus, I love Nilla wafers and they’re layered in the pudding and sprinkled on top. Over time, they soften from the pudding but still retain some crunchiness, I’m in heaven. 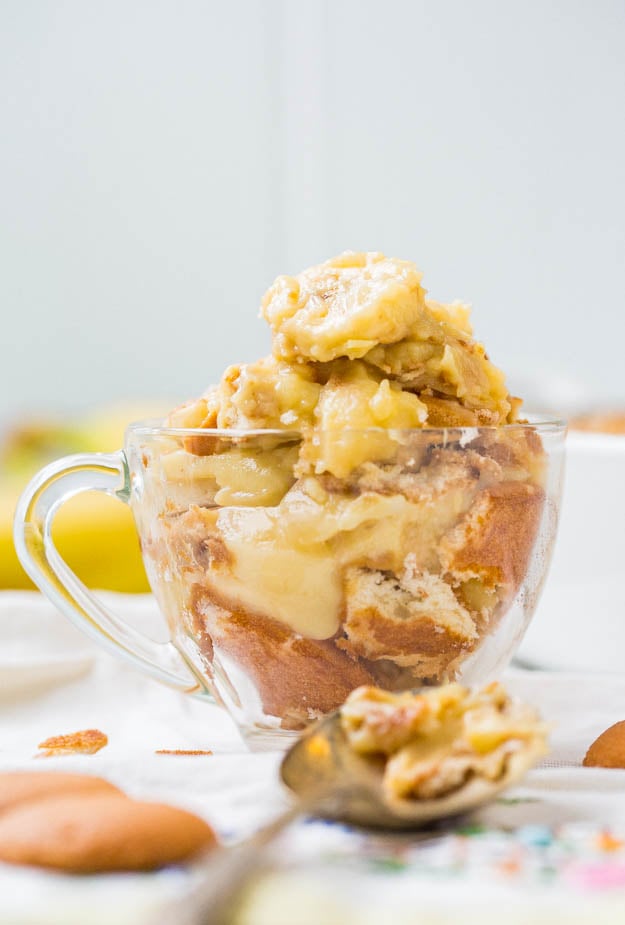 The pudding itself has no bananas in it, but they’re layered in the pan with Nilla wafers, making the pudding quite universal for non-banana desserts.

If you’ve never had pudding from scratch, it’s nothing like pudding mix from a box. I love the results of pudding mix in cookies or banana bread, but for eating as-is, scratch pudding is the promised land.

The homemade banana pudding is sweet, luscious, and smooth with big nostalgic appeal. The texture from the wafers and the bananas, both suspended in thick and creamy, is pure good old-fashioned comfort food in a bowl.

If you’ve never made Nilla Wafer banana pudding from scratch, you’re going to love it. 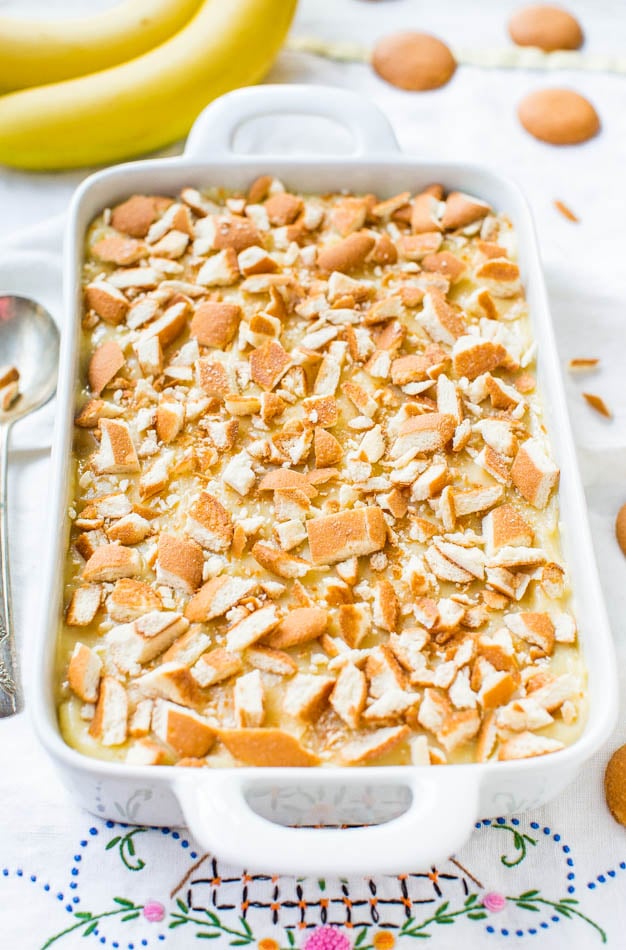 To make this banana pudding from scratch, you’ll need:

I have only made this recipe with 2% milk. The pudding was wonderfully creamy and thick with 2% and I think whole milk, half-and-half, or cream would make it too thick. I’m not sure how using a non-dairy milk would work.

Is There a Nilla Wafer Substitute I Can Use?

If you don’t have Nilla Wafters in your area, try graham crackers. 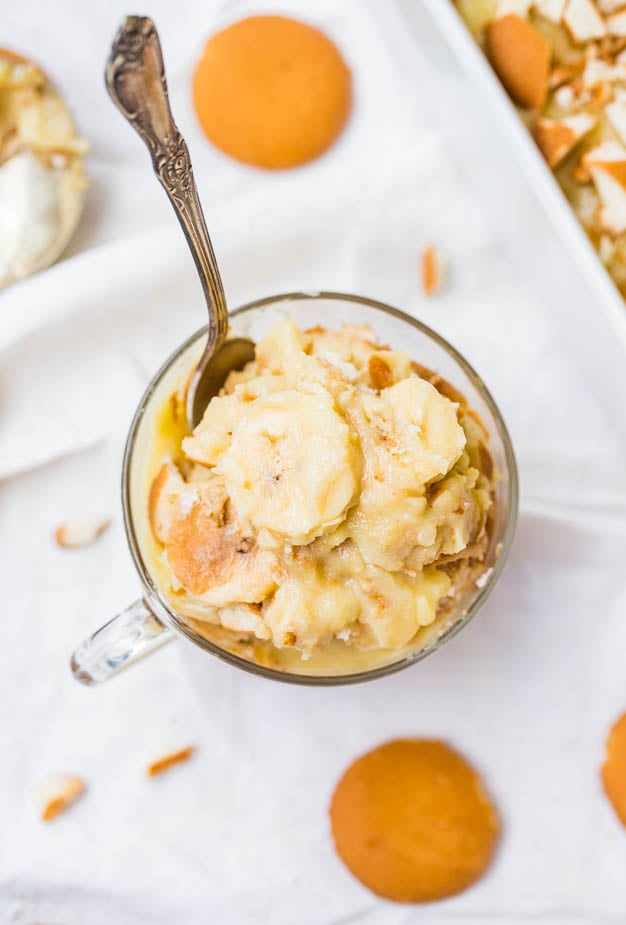 How to Make Old-Fashioned Banana Pudding

Making homemade banana pudding is like making gravy. It’s easy, but you’ll become best friends with your whisk for about a half hour.

Get everything you need out and ready before starting because you’ll be busy whisking. Mise en place.

Make the vanilla pudding: In a medium sauce pan, combine sugar, flour, optional pinch of salt, and pour 2 cups of 2% milk over it. Heat the mixture until it begins to boil gently, whisking frequently.

If you don’t whisk frequently, tan pudding skin will form on the bottom of the pan. When it breaks up, you’ll have tan chunks floating through your creamy mixture. No thanks.

Keep the heat at medium because cranking it up will likely cause the mixture to scorch, so just take your time.

It took a good 15 minutes of the pot appearing to do absolutely nothing for my pudding to finally begin to barely boil because I was compulsively whisking. I was staring into the proverbial pot that never boils, whisking it. 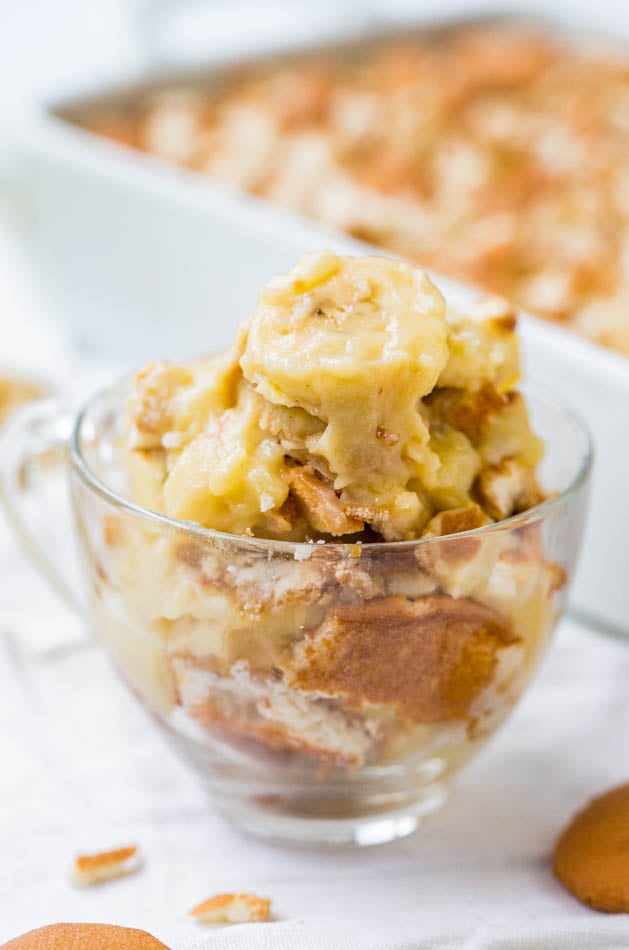 After the mixture boils, whisk continually for the next 2 to 4 minutes, or until the pudding has thickened. Take it off the heat and add vanilla.

In a glass measuring cup, whisk together 3 eggs and add about 1/4 cup of the hot pudding mixture to the eggs, whisking the whole time. This is called tempering eggs and if you don’t do it, you’ll literally scramble them.

Slowly pour the contents of the measuring cup into the sauce pan, whisking the entire time. Return the pan to the heat for about 2 to 4 minutes, whisking the whole time. This cooks the eggs.

Assemble the pudding: In the meantime, layer Nilla wafers, topped with bananas, in an 8×8-inch or similar sized pan. Mine was 10×7 inches.

Pour half the pudding over the wafers and bananas. Add another layer of wafers, bananas, and top with the remaining pudding. 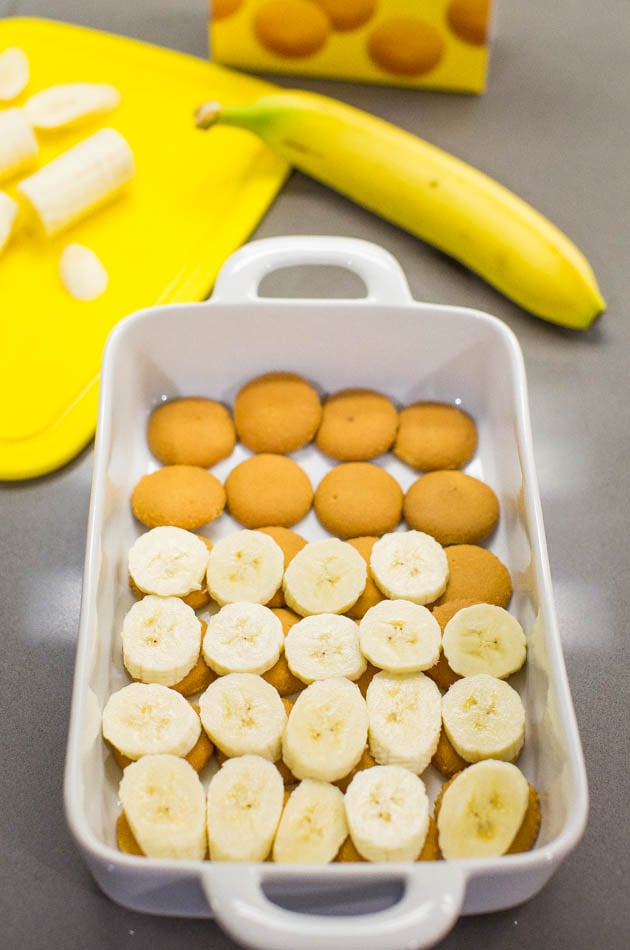 I imagine so, but I’ve only made it as written so any modifications you make will be trial and error. If doubling this banana pudding recipe from scratch, assemble it in a 9×13-inch baking dish.

Can I Prep This in Advance?

I don’t see why not! Like I said, this old-fashioned banana pudding will last up to 4 days in the fridge, so you’re fine to make it the night before you plan on serving it. 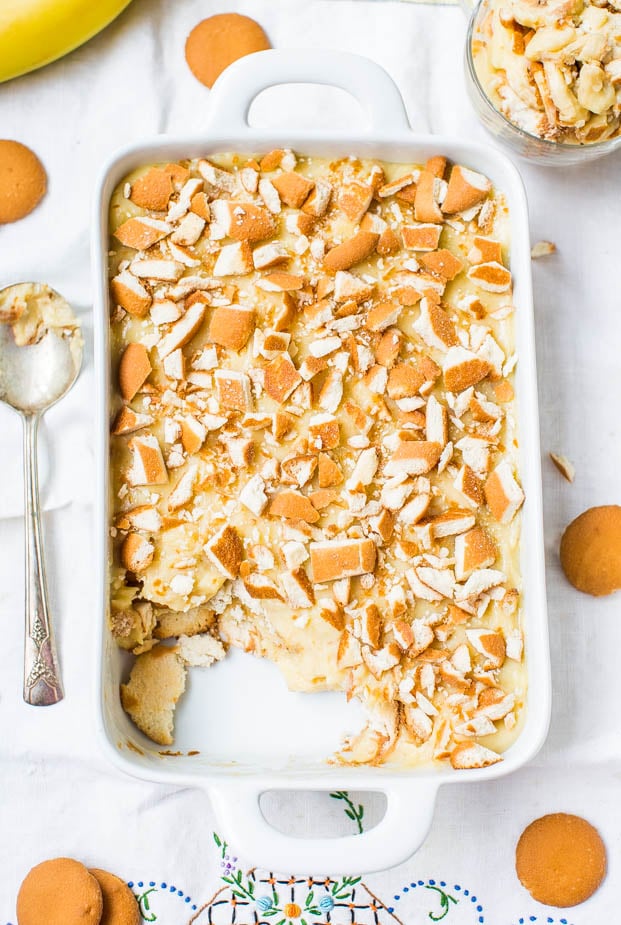 How to Keep Bananas From Turning Brown in Banana Pudding?

Once sliced, it’s normal for bananas to turn slightly brown in the Nilla Wafer banana pudding. They’re still completely safe to eat, but I know they don’t look as appealing.

Using ripe, but not brown, bananas helps prevent them from turning brown once sliced.

Also, if you choose to top your homemade banana pudding with whipped cream that helps too. It seals in the bananas and prevents them from being exposed to the air (which is what turns them brown).

Can I Add Whipped Cream on Top? 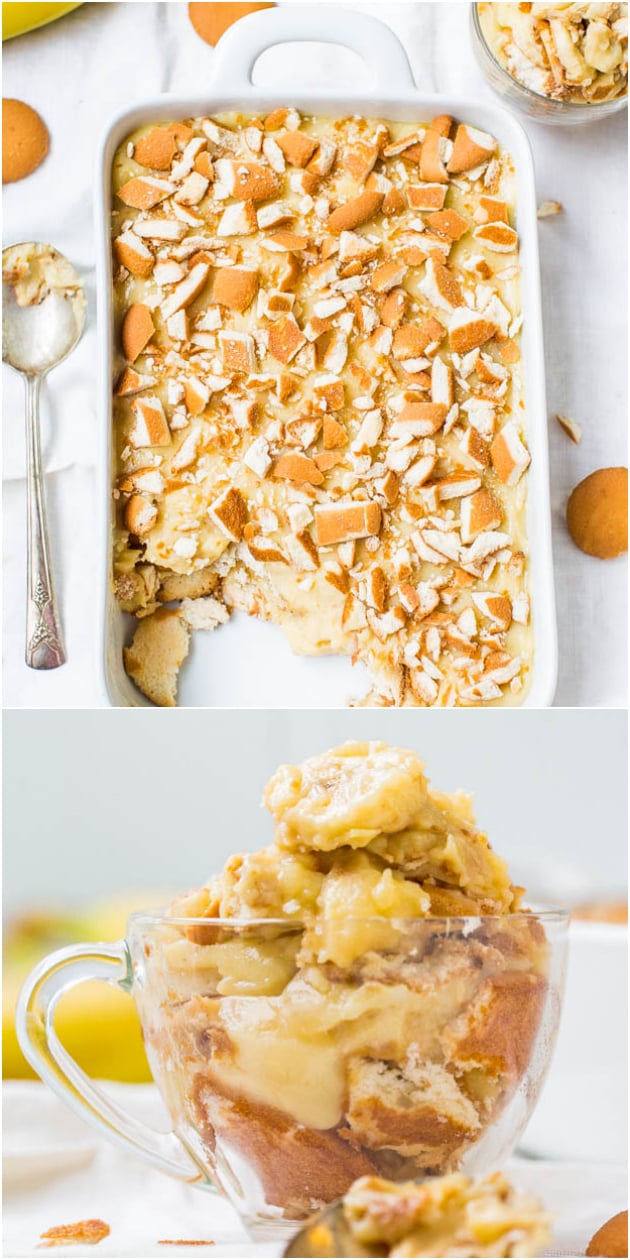 Once assembled, this easy banana pudding from scratch will last up to 4 days in the fridge if stored in an air-tight container. The bananas won’t brown since they’re not directly exposed to the air, but the Nilla Wafers will soften over time.

Can You Freeze Banana Pudding?

The homemade vanilla pudding itself can be frozen and thawed no problem, but once you’ve assembled the entire dessert I don’t recommend freezing it. The Nilla Wafers will become soggy and the banana slices will likely become grainy once frozen.

Bananas: I used ripe bananas, but not over-ripe. Save those really freckled and speckled ones for banana bread. They will just disintegrate and biting into slightly firm banana slices is the goal.

Nilla Wafers: I used Reduced Fat Nilla Wafers for two reasons. First, the obvious to save calories and fat when possible so you can eat more dessert. Secondly, the Reduced Fat variety are firmer, crunchier, and don’t turn to mush as easily, an advantage here.

Topping: If desired, you can top this homemade banana pudding with whipped cream as well as crushed Nilla Wafers. Make it however you grew up eating it!

What Readers Are Saying

This old-fashioned banana pudding recipe has been one of the most popular spring and summer desserts on my site for the past few years. Here are a few 5-star reviews readers have left on this recipe:

“Homemade banana pudding is one of my favorite desserts. My grandma has always made it for me. I recently relocated and had a craving for it. Just like the rest of her wonderful desserts she didn’t have a recipe! So, when I came across this recipe I was thrilled because it consisted of all the ingredients my grandma uses. I made it and it was absolutely DELICIOUS! It lasted one day at our house. Five stars all the way!” — Yvette

“This is definitely how my grandma used to make it way back in the early 70s!” — Cyndi

“Made it, was amazing! Thank you” — Mariya

“This was a delicious dessert. My husband loved this. Thanks for a wonderful recipe! This was the first I’ve made from your website and I’m sure there will be many more that I will make. :)” — Amy

Pudding will keep airtight in the refrigerator for up to 4 days. The banana slices don’t turn brown, although the wafers do continue soften as time passes.

ALL OF MY BANANA RECIPES!

Easy Banana Cream Pudding Pie with Cream Cheese Crust – The no-bake filling tastes like a fluffy slice of heaven and the crust is no-roll!! An easy, goofproof pie that anyone can make in minutes!! 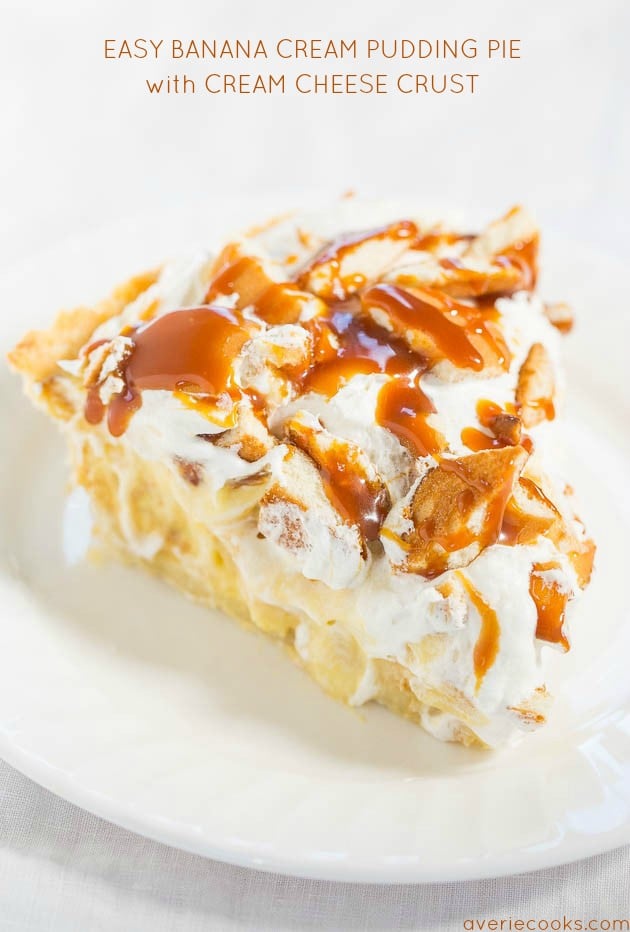 Fudgy Banana Bars with Vanilla Bean Browned Butter Glaze — Fudgy is the only word that describes these bars! They’re the banana equivalent of moist, fudgy brownies with zero trace of cakiness. 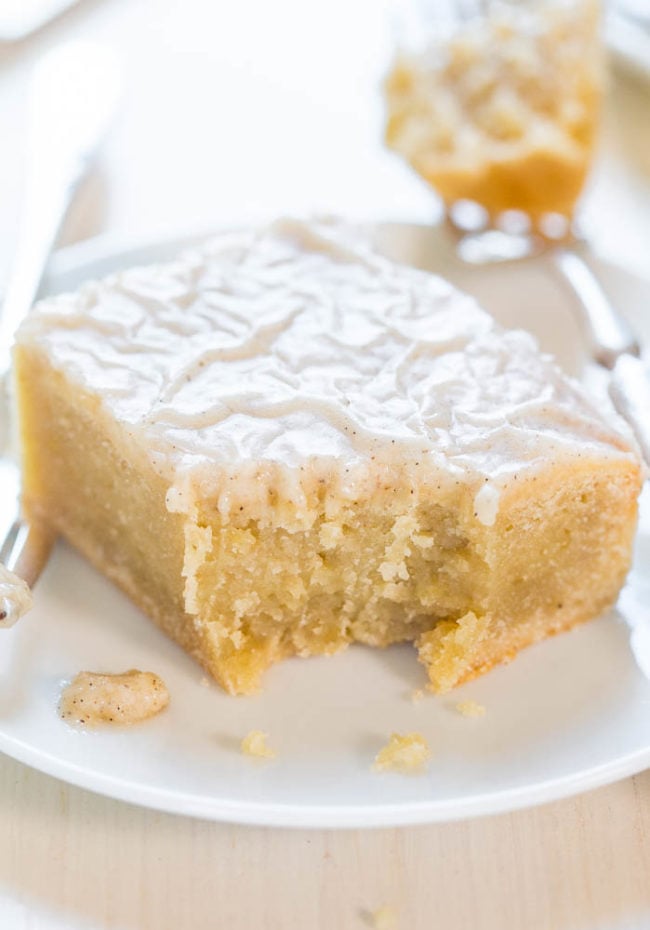 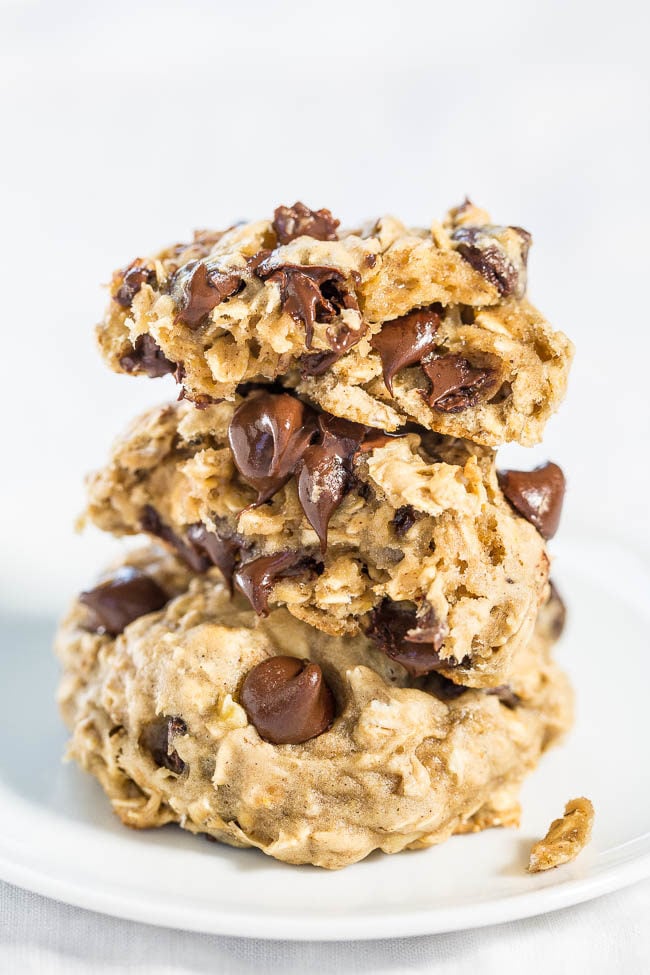 Caramelized Banana Upside Down Cake — This upside down cake is super moist thanks to the combination of sour cream, buttermilk, and vegetable oil. It’s so easy to make, and the caramelized banana flavor is impossible to resist! 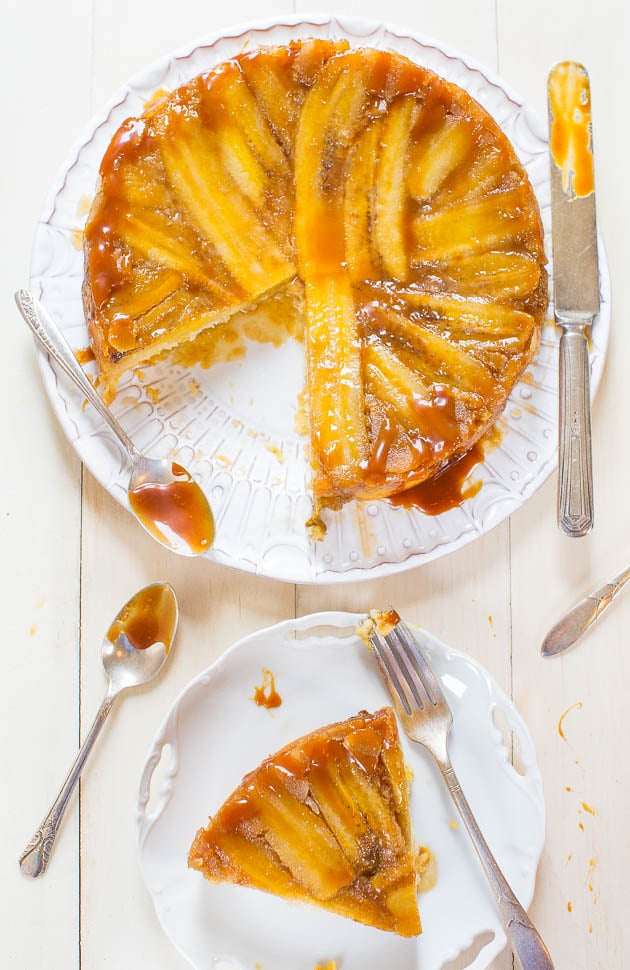 Banana Bread Pudding – Bread pudding meets banana bread in this EASY recipe that everyone will LOVE!! Firmer exterior with a custardy interior and an amazing vanilla sauce that is to-die-for! 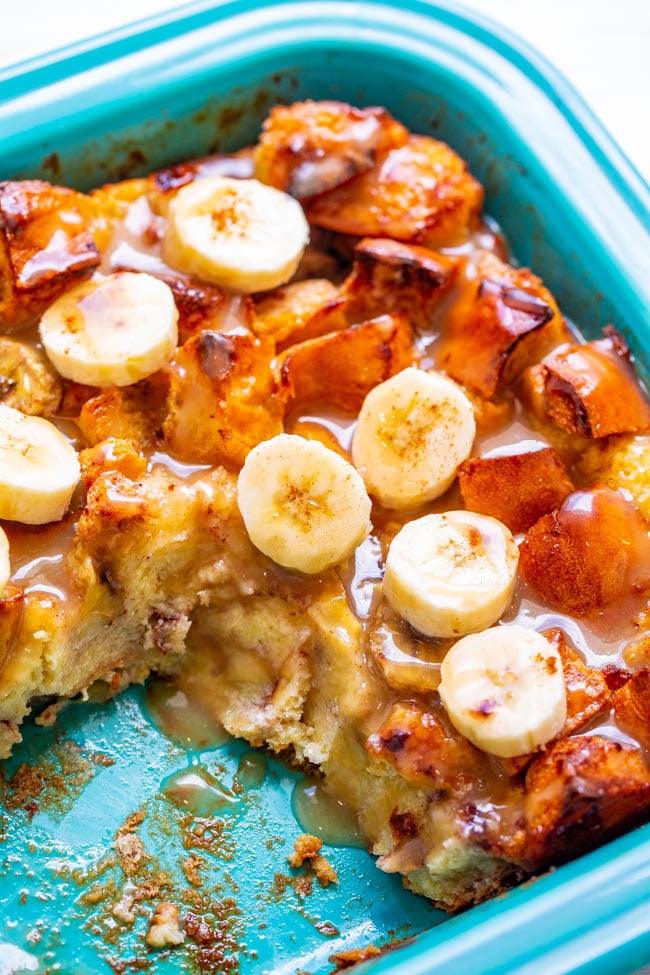 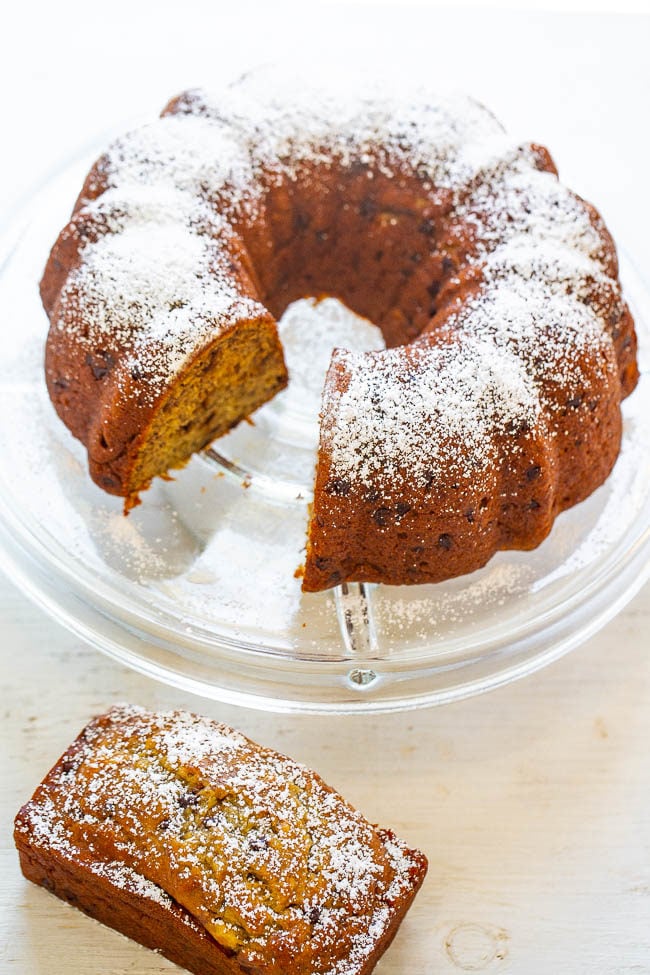 Banana Oatmeal Chocolate Chip Cookie Bars – A FAST and EASY dessert that is on the HEALTHIER side with only 1/4 cup butter and no oil!! Bold banana flavor, chewiness from the oats, and plenty of chocolate in every bite!! 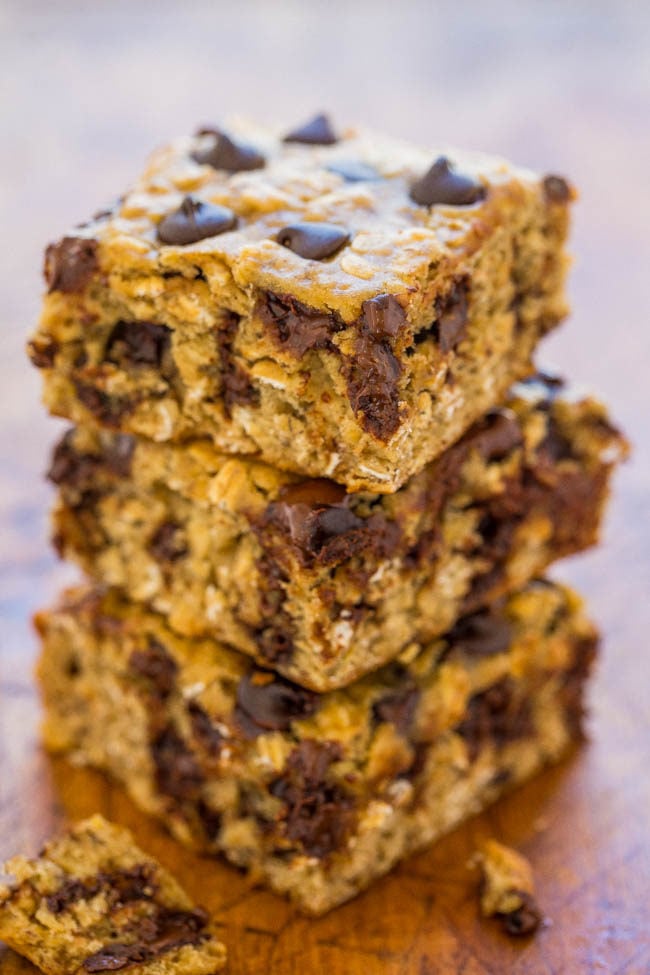 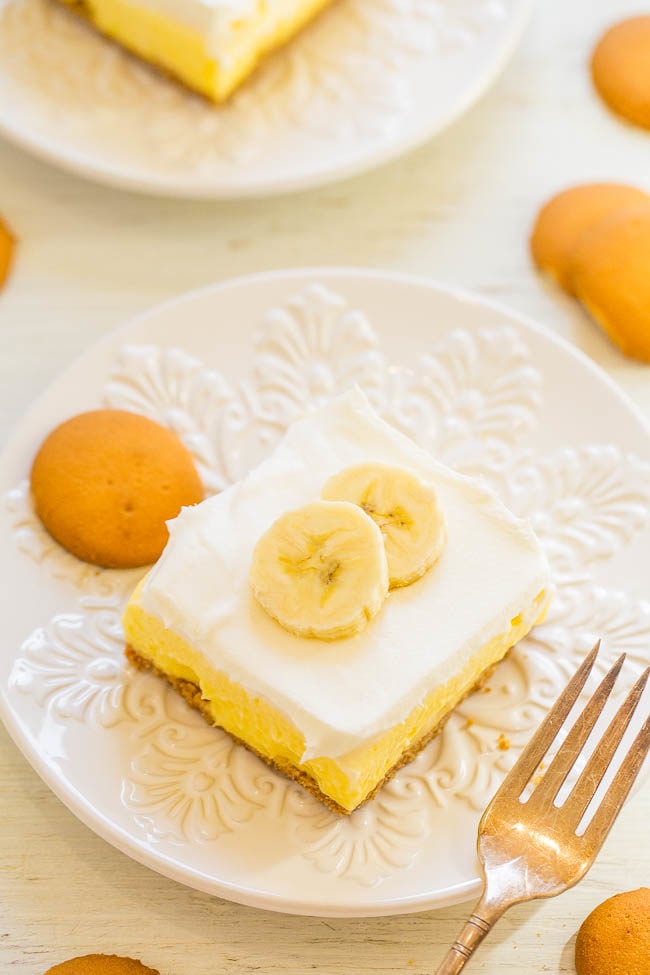