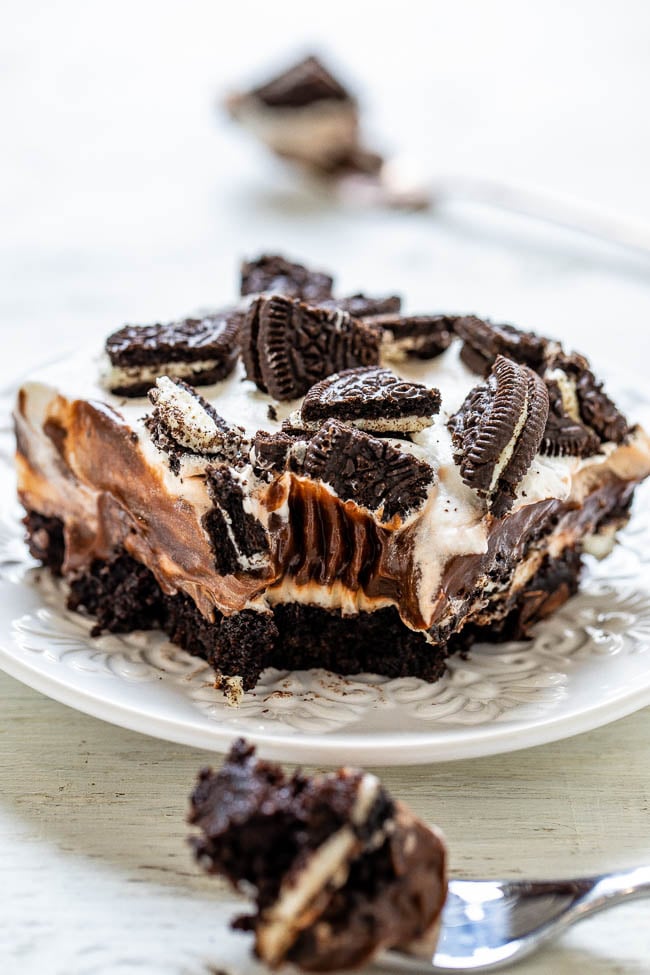 If you’ve never had a lush-style dessert, this layered Oreo cookie pudding dessert is the first one you need to try.

It’s ridiculously chocolatey and decadent. Between the layers of brownies, cream cheese, chocolate pudding, whipped topping, and Oreo cookies, you will be in a chocaholic food coma heaven, which is a great place to be.

In the case of desserts, lush does not mean someone who likes to drink.

Lushes are layered desserts, usually with pudding as one of the layers, as well as a sweetened cream cheese layer, and a whipped topping layer, and this one is no exception — it has all of those layers.

Plus, there is usually something with the crunch, like crushed cookies, and in this case it’s Oreos. 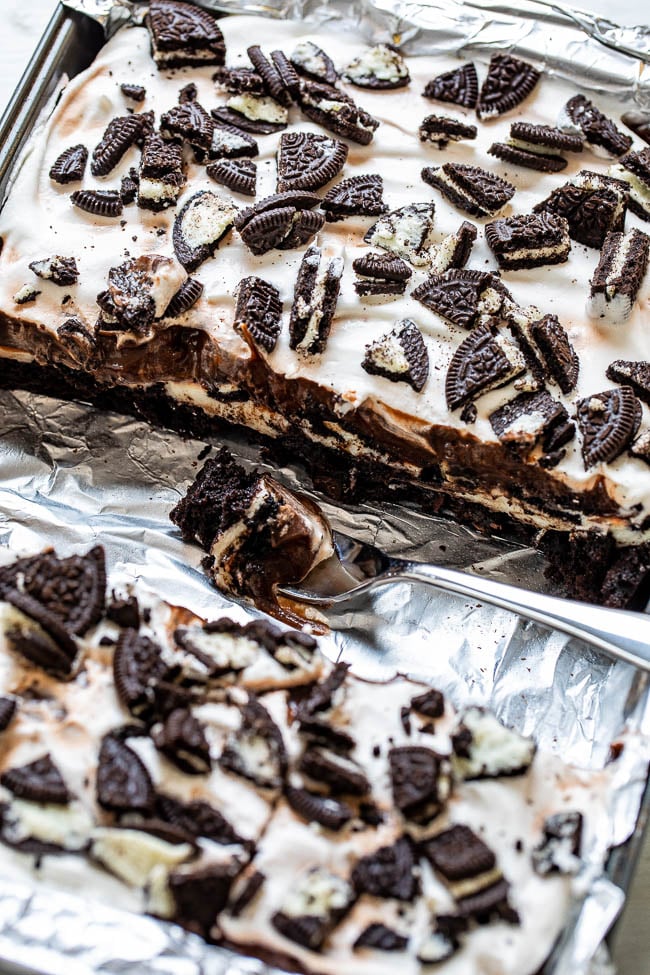 Because I slightly underbaked the brownies, the brownie layer is so fudgy and rich and the tangy-sweet cream cheese is a great counterbalance to the dense brownies.

Most notable of all the layers for me (aside from the brownies) is the chocolate pudding. It’s light but rich, and it’s picture perfect in conjunction with the Oreo cookies.

The crunch of the Oreos, in contrast to the silky smoothness of the other layers, is what will keep you going back for more. Long after you’re full, it’s the type of dessert you just want one more bite of.

But because it is so rich, and makes a 9×13-inch pan that’s filled the the very top, it’s a dessert that definitely feeds a crowd and is perfect for picnics, parties, potlucks, and get-togethers.

It’s a great summer dessert because it’s served chilled, and aside from the brownie layer, everything else is no-bake and simply stirred together.

What Are the Layers in the Oreo Brownie Lush?

From the base to the top of this brownie pudding dessert, there’s:

How to Make Oreo Brownie Lush

First, bake up a 9×13-inch pan of brownies. Next, add a mixture of cream cheese, confectioners’ sugar, and Cool Whip.

This layered Oreo dessert with Cool Whip and pudding is very easy to make and assemble, but there are six layers so you will have a couple dirty bowls when you’re done, but it’s so worth it.

Can I Make the Brownie Layer From Scratch?

Yes, if you are motivated, you can make a scratch recipe of brownies for this brownie pudding dessert. I’d double this recipe if that’s the route you’re going.

Can I Use Whipped Cream Instead of Cool Whip?

If you don’t have Cool Whip in your area, I am not sure what to tell you because I don’t know how well real whipped cream will hold over time. You can try it and see what happens.

Note that most boxed mixes of brownies don’t call for a 9×13-inch size when you read the options on the box. Most are for either 8×8-inch or 9×9-inch pans, but just bake it in a 9×13-inch pan anyway. You want the brownie layer to be on the thinner side because there’s so much more going on top of it that thinner is preferable.

I used a box of Ghirardelli Dark Chocolate Premium Brownie Mix. It’s my new favorite boxed brownie recipes for desserts like this where I don’t think making scratch brownies is warranted because you’re not solely enjoying this as a brownie; it’s heavily doctored up.

It’s analogous to the fact that I wouldn’t use the finest rum ever in a rum punch when are ten other liquors and liquids going into it and you’re not just drinking it straight. Use your favorite boxed mix.

Lush will keep airtight in the fridge for up to 1 week, noting that the brownie layer and Oreos will soften more as time passes.

Chocolate Chip Brownies – Thick, rich, and a chocolate lovers dream!! Fudgy in the center with chewy edges and studded with chocolate chips! If you’re craving chocolate, this EASY homemade brownie recipe is just what you need!!