Microwave Apple Crisp — This microwave apple crisp comes together in just 5 minutes and generously serves one person. Top it with a scoop or ice cream or whipped cream! 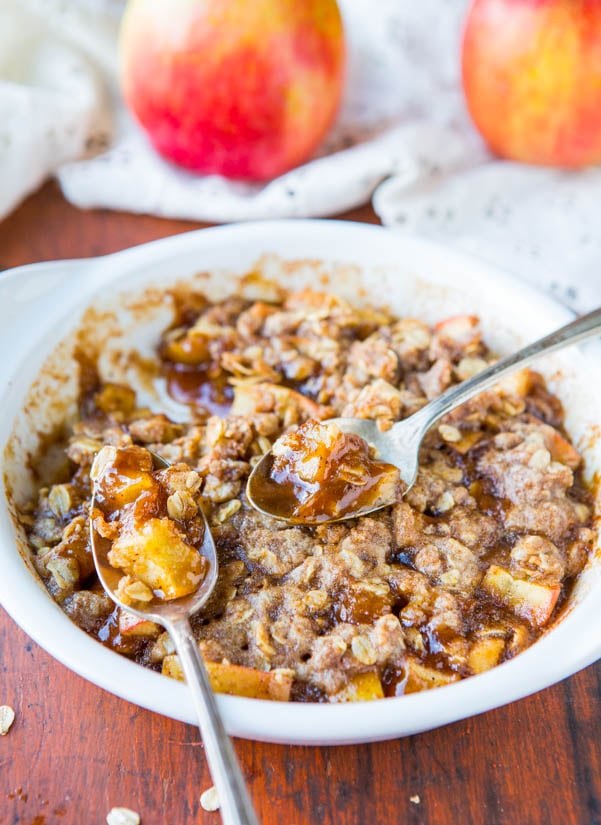 This microwave apple crisp is the best and easiest thing to make with all those apples you bought because they were on sale. You don’t need to turn on your oven and it’s ready in 5 minutes. And it’s single-serve, vegan, and gluten-free. So take that, traditional crisps.

I’m a big fan of crumbles, crisps, and anything with a crumbly or streusel topping. Those buttery, brown sugary nuggets with texture from oats get me every time. But while I like baking crumbles, usually I don’t need or want a whole pan. It’s the type of dessert that’s really best served warm, with a big dollop of whipped cream or ice cream on top, and after the first, warm juicy piece, the leftovers just don’t measure up.

This quick apple crisp serves one generously, or two more modestly if you feel like sharing.

When I posted the 5-minute Fudgy Chocolate Brownie Microwave Mugcake with Vanilla Glaze, I wondered what else I could make easily and successfully in the microwave. Cooking things in the microwave can be a finnicky proposition, but this came out beautifully and quickly.

The apple base layer, comprised of apples, tossed with (vegan) butter, cinnamon, sugar, nutmeg, and a pinch of cornstarch cooks in just a couple minutes after adding the topping mixture. The cinnamon, brown sugar, and oatmeal topping is tossed together in a minute.

The apples retain some slight texture, which is the way I like them. If they were pasta, they’d be al dente. I don’t like my fruit so soft that it turns mushy and these were just right.

I had cookie dough ice cream, but was out of vanilla, and didn’t have any whipping cream. I was getting ready to move and was trying to thin things down, but either would be wonderful on this warm, sweetly spiced, easy little number.

You get all the scent benefits that waft through the house as if you’d baked a traditional apple crisp, except you don’t have to heat up your house and it’s ready in 5 minutes.

Breakfast, snack, dessert, a midnight snack for one. So many ways to go with this microwave baked apples dessert. 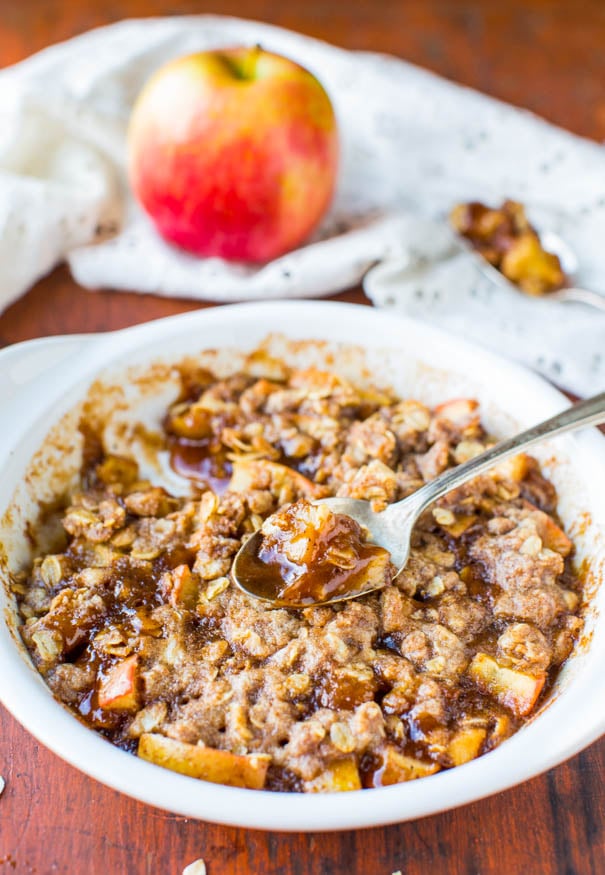 What’s in This Microwave Apple Crisp? 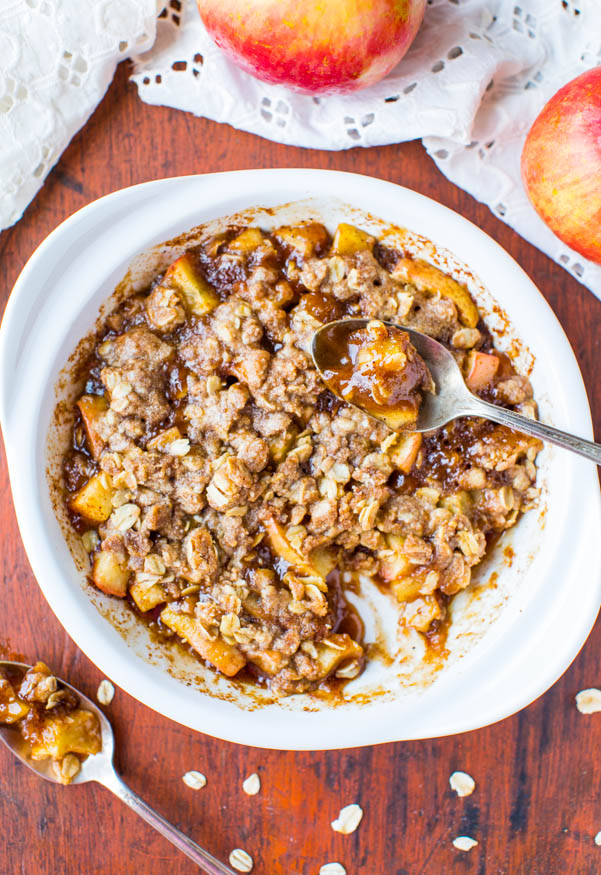 How to Make Microwave Apple Crisp

First, make the apple crisp topping by stirring the ingredients together until they resemble the texture of fine sand. Then, lay the diced apple in a microwave-safe bowl and top with butter. Microwave 1 minute to soften the apples.

Done means juicy, bubbly, rich, and caramely. The brown sugar and butter caramelizes as it cooks, creating a thick sauce which coats the apples. It’s the best part. Well, that and the crumbly bits. 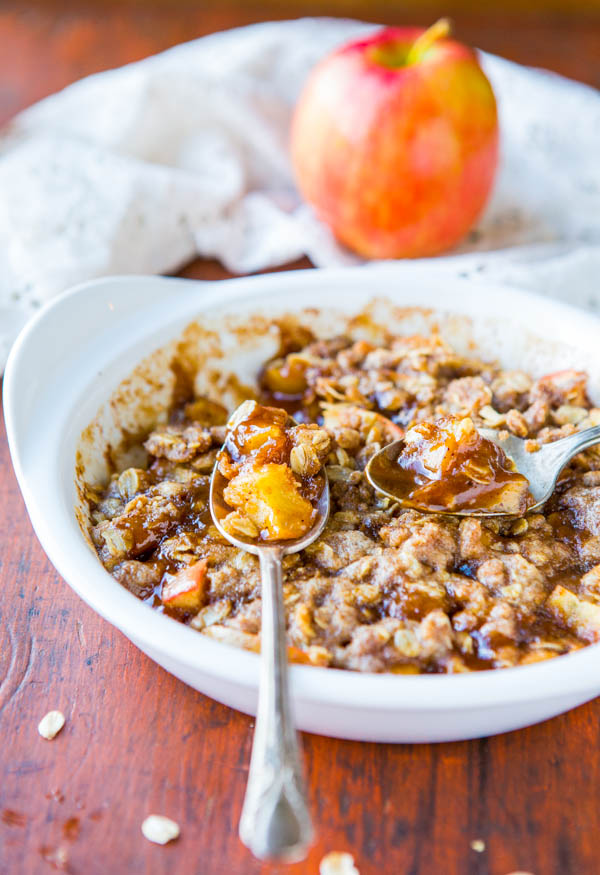 You can use really any apple variety you’d like for this microwave apple crisp recipe. I used a Fuji apple, but Gala, Granny Smith, Honeycrisp, and Jonagold would all work too. 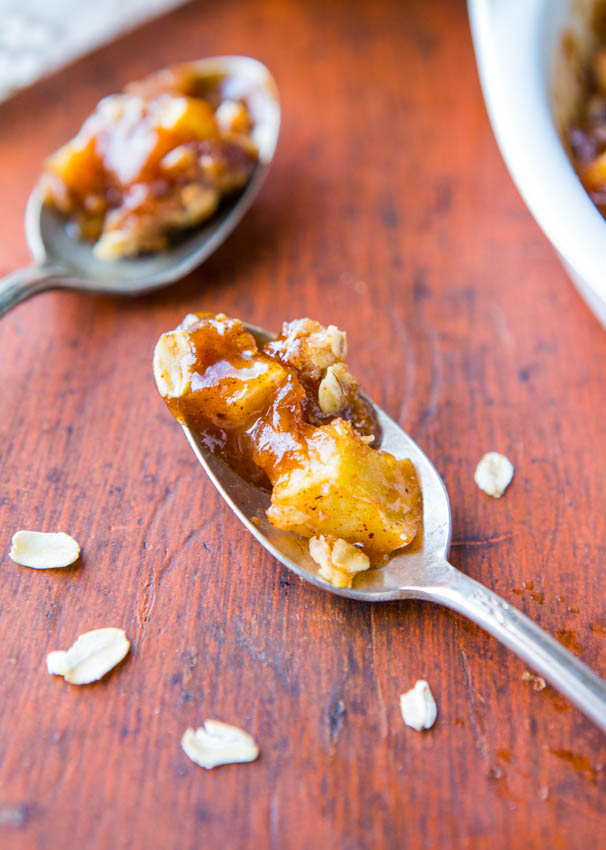 Can I Omit the Cornstarch?

No, this quick apple dessert won’t turn out right if you skip the cornstarch. 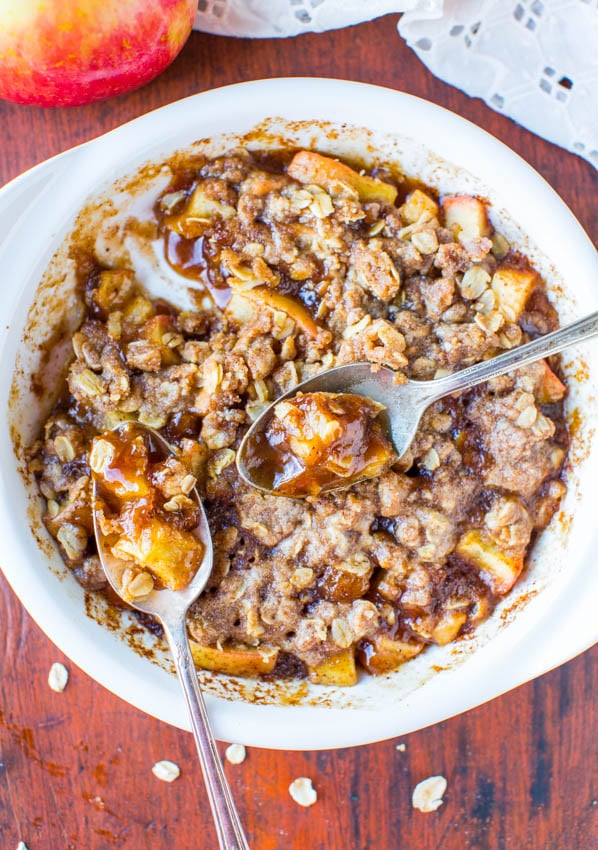 Can I Make This Gluten-Free?

Most likely, yes, although I’ve only ever made this recipe as written. You could try using a gluten-free baking blend in place of the all-purpose flour and see how it turns out. 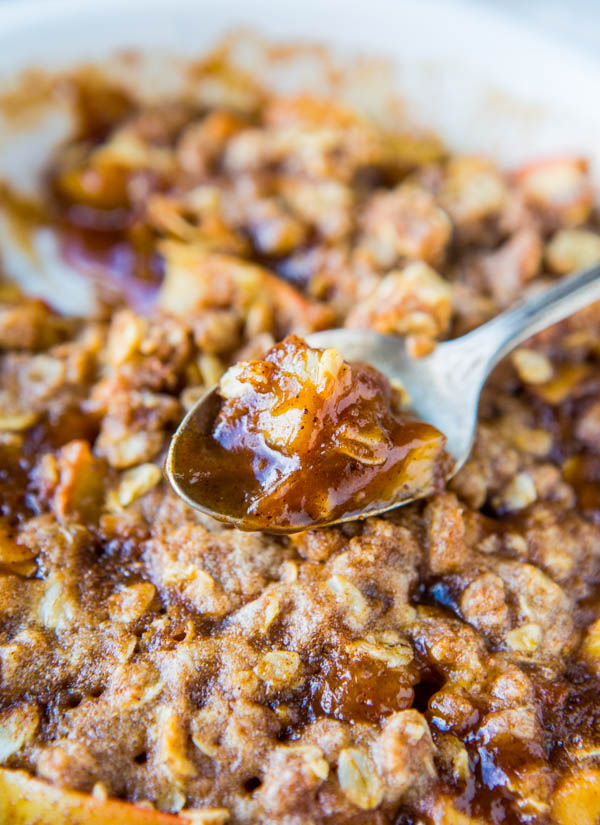 Can I Use Quick Oats Instead of Rolled?

I’ve only made this recipe with old-fashioned rolled oats before, so I’m not sure if quick oats will work here. They’re not as chewy as rolled oats and might make the apple crisp topping too dry. 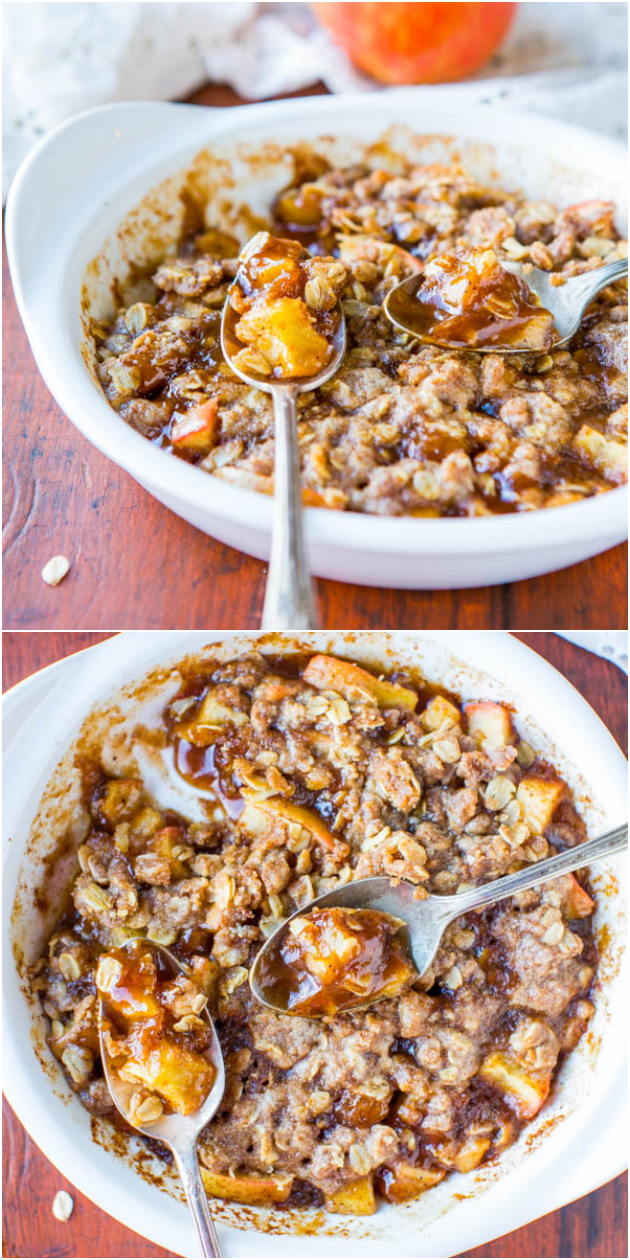 Can I Adjust the Amount of Sugar Used?

If desired, you can add slightly more or less sugar than what the recipe calls for, depending on how sweet your apple is. I don’t recommend skipping the sugar altogether though, otherwise I’m not sure this would be a real apple crisp.

Can I Use Other Fruits in This Microwave Dessert?

I’m not sure! I’ve only ever made this microwave apple crisp with fresh apples. You may be able to substitute fresh pears, but I can’t say for certain.

I used a fair amount of both cinnamon (2 teaspoons) and nutmeg (1 teaspoon) because I’m fond them, and like things more boldly spiced. If you don’t like as much pop from cinnamon or are more sensitive to nutmeg, dial down the spices, to taste.

You could also work in pinches of pumpkin pie spice, ginger, cloves, allspice, or other warming spices you enjoy.

Make sure to use a microwave-safe bowl or baking dish that’s got enough room for expansion. The apples release a fair amount of juice, the butter melts, and the whole thing puffs and rises as it cooks. Take that into account so you don’t have an overflow situation.

With fruit-based recipes, because of the varying amounts of water released, cooking times may vary. And because microwaves vary as well, you may need to adjust your cooking time. Cook until yours is done.

Make the Apple Base Layer

Crumble is best warm and fresh, but leftover portion will keep airtight for up to 3 days.

Although the recipe title indicates that this is for one person, it would be a very hefty portion of dessert for one person and likely you will split it with someone or eat the other half another day; thereby halving all nutrition stats. I also think the nutrition stats are skewing artificially high in this computer-generated estimate and you're welcome to calculate them manually by hand to see what you come up with. 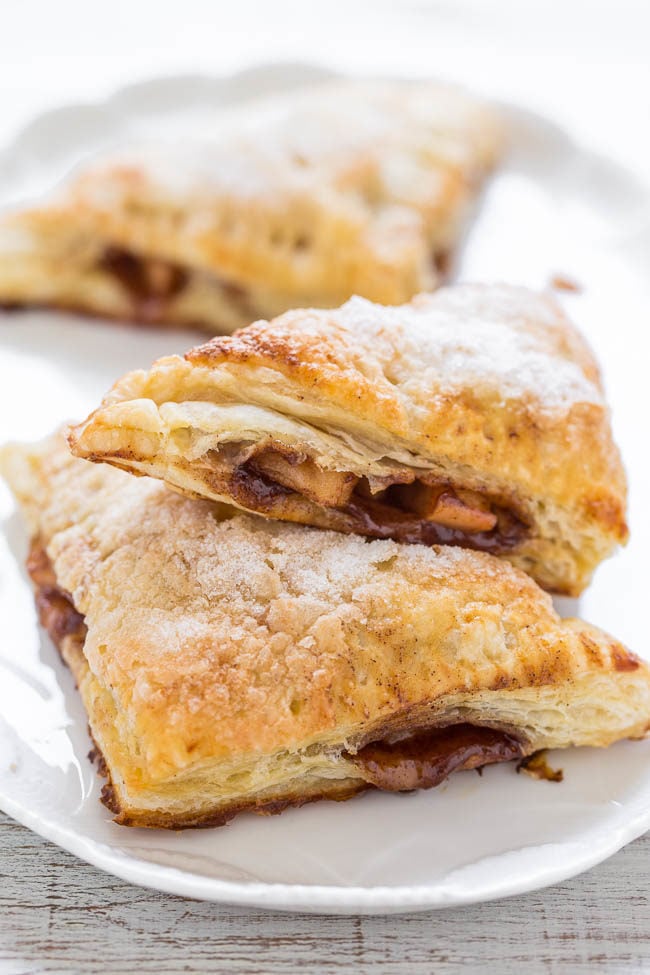 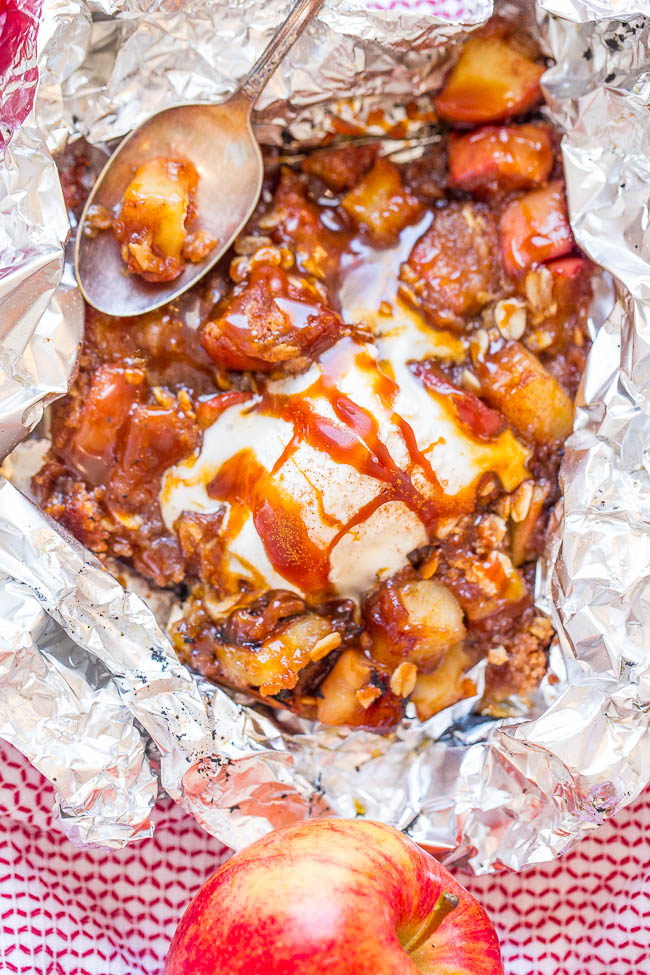 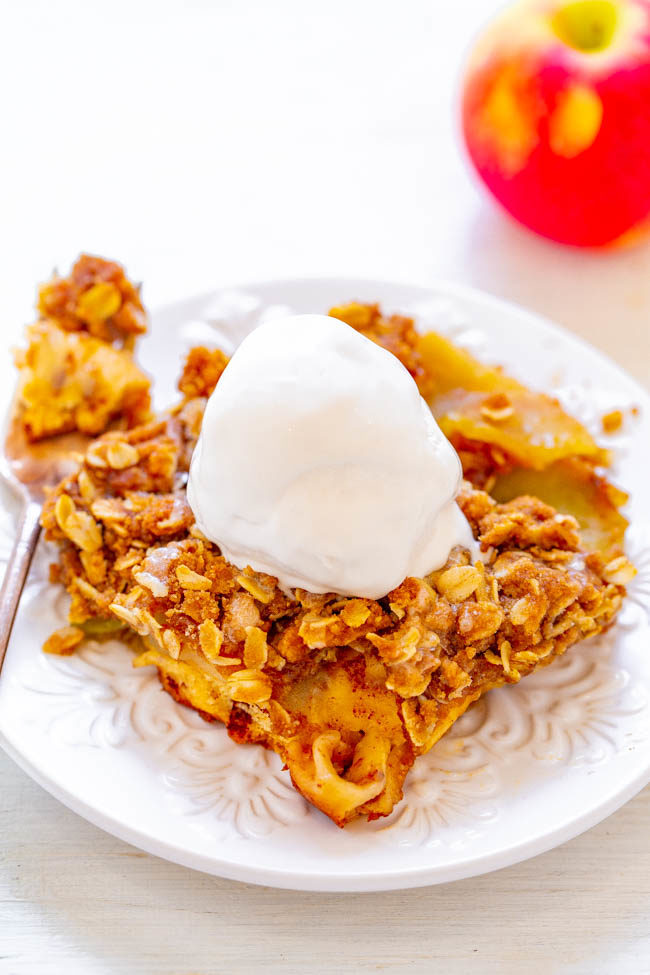 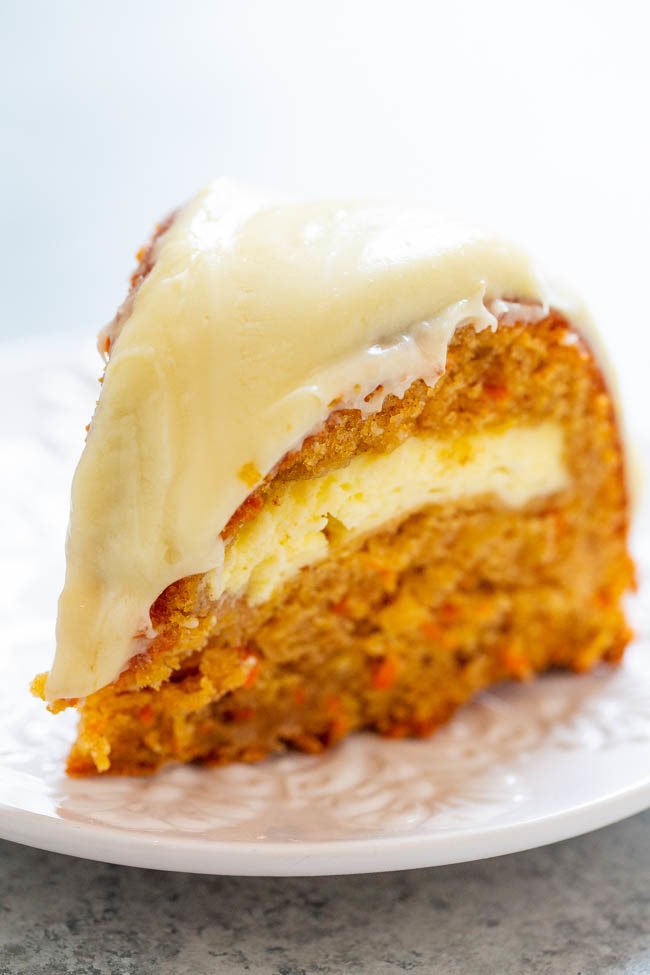 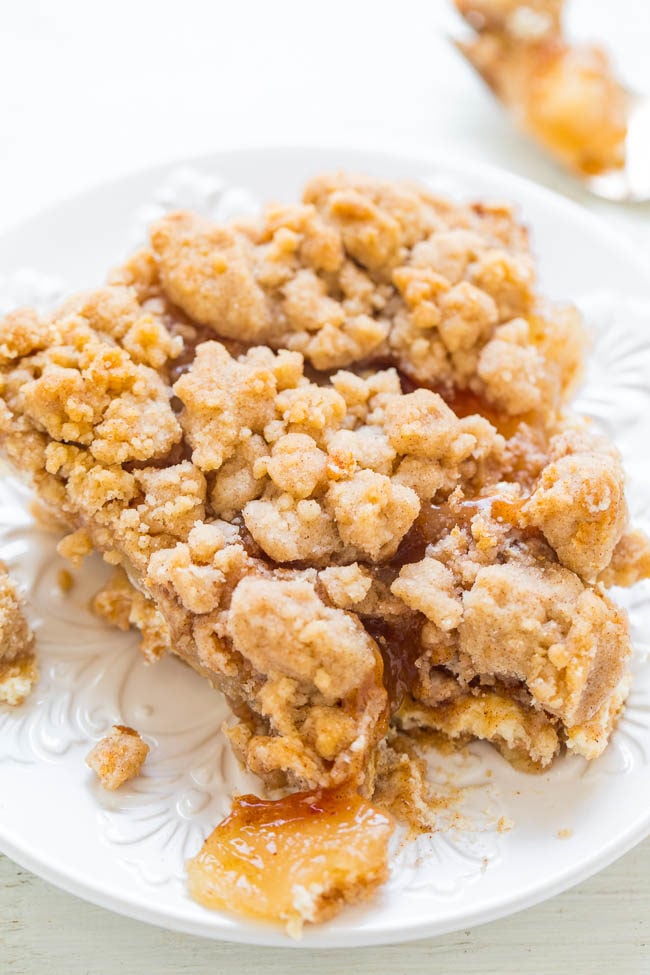 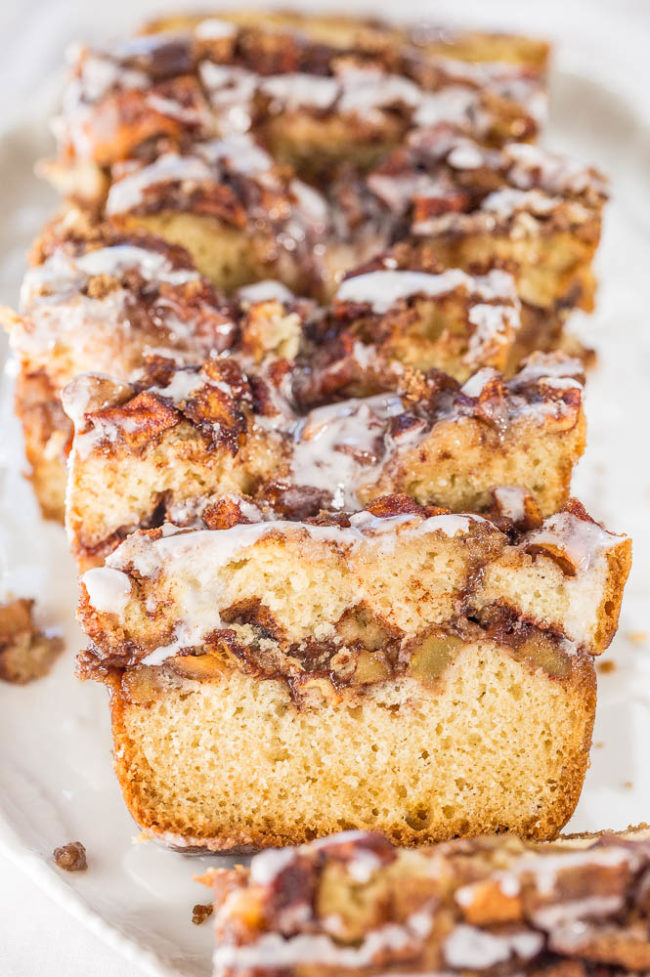