I used to fear making bread with yeast, worrying that it wouldn’t turn out and that I would just wind up wasting precious time, energy, and ingredients for all nothing.

I’m over my fears now. 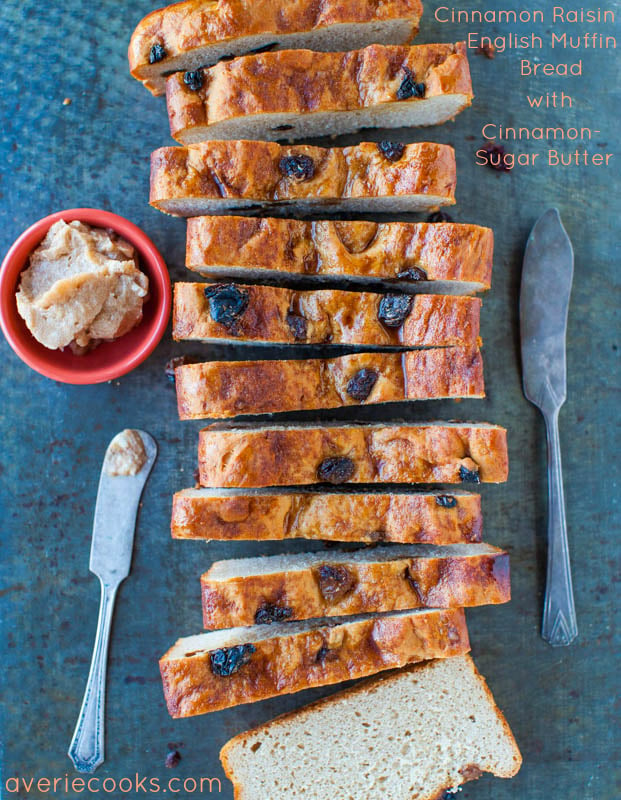 If you’ve never made bread before, this is a great one to start with because there’s no kneading. There’s also no need to first dissolve the yeast in water. Basically, this is a dump-it-in-a-mixing bowl kind of recipe. My favorite kind. 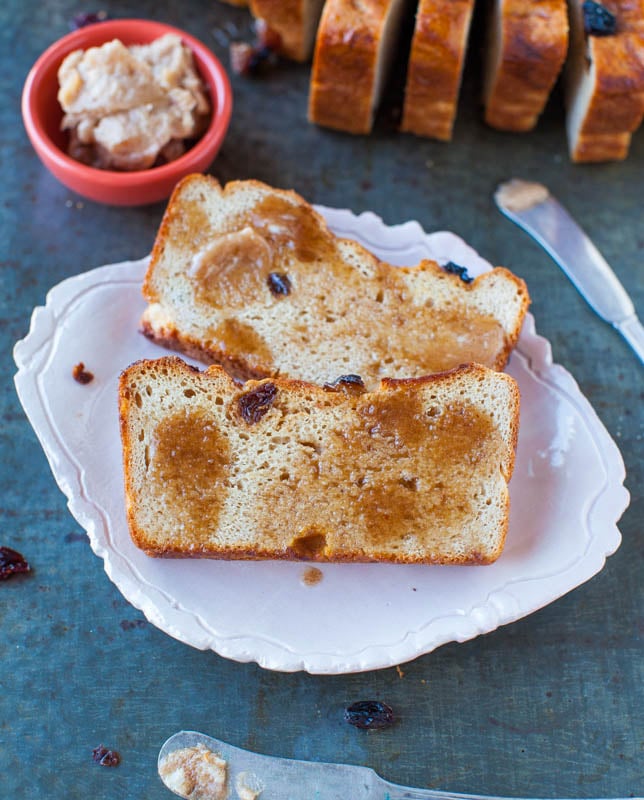 I love English muffins with their pock-marked and dimpled texture and the cratered surface is prime for soaking up warm melted butter, which gets trapped in all those holes and valleys.

I also love cinnamon-raisin bread. My grandmother’s cinnamon-raisin bread was the best I’ve ever eaten but her recipe died with her. My own mother is not a bread baker and no one will ever know how Grandma made her bread, but I wanted to combine my appreciation of English muffins with my fond memories of cinnamon-raisin bread, and roll it all into one dense, chewy, hearty loaf. It also happens to be World Bread Day today, a happy yeasty serendipitous twist. Plus, I’ve recently seen Jessica, Rebecca and others on Tasty Kitchen make various versions of homemade English muffins and I had to take the plunge. 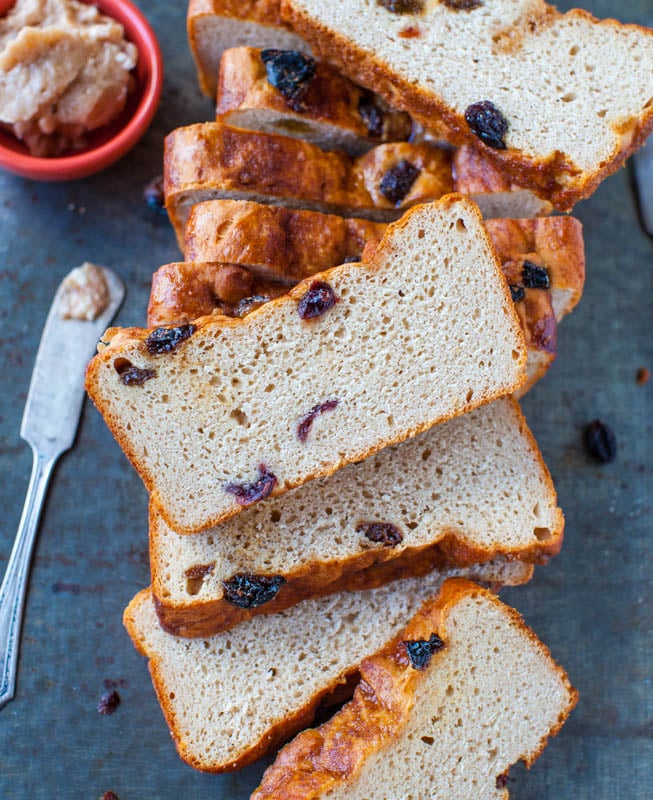 English muffins don’t really become true English muffins for me unless they’ve been toasted and I think they’re downright mealy and nearly inedible in their untoasted state. A couple minutes in a toasty box transforms them into magical discs and although this bread is okay untoasted, it reaches its white carbtastic peak after being toasted and then slathered with cinnamon-sugar butter. The butter melts and seeps into the porous surface and sinking my teeth into it makes me wonder why I haven’t been baking bread all my life. I won’t be able to ever look at a storebought English muffin the same way.

Also the English muffins at my grocery store don’t have raisins in them, and although the raisins may be omitted if you’re not a raisin person, the extra chewiness from their wrinkled texture, the subtle sweetness, and the touch of added moisture that they impart into the bread are welcome additions. Plus, raisins pair perfectly with cinnamon. I think I ate a cinnamon-raisin bagel every single day for about four years in late high school and early college. I love the cinnamon-raisin combination, especially in bread, but I’m even down with it in a Cinnamon Raisin Bread Smoothie.

I’m also a cinnamon fiend. I usually double the amount of cinnamon in most recipes if I’m using someone else’s, and for the true die hard cinnamon freaks, use more than I indicated; however, cinnamon is worked into this bread in three ways. First, it’s added to the dough. Secondly, I added a sprinkling of cinnamon-sugar to the top of the loaf before baking it, and finally before serving, a healthy smear of the cinnamon-sugar butter, which is amply spiced with cinnamon, goes a long way in boosting the cinnamon intensity. 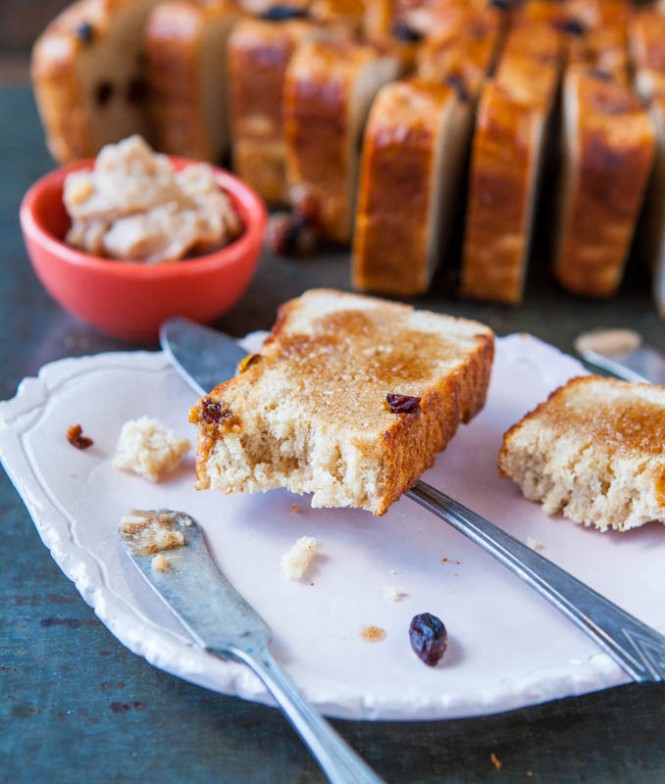 When you’re ready to make the bread, in a mixing bowl simply combine about half of the flour, the yeast (doesn’t need to be dissolved and can be added in dry and straight from the packet), the sugar, warmed milk and warmed water (heat it in a microwave-safe cup for about one minute; you should be able to stick your finger in it and it should be warm but not burning hot; yeast dies at about 140F so don’t overheat the liquid and kill it), cinnamon, salt, baking soda, and let the machine whip it all together for about three minutes. Then, add the remaining flour and mix until just combined and don’t overmix, stir in the raisins, and your dough-making is done. As easy as making cookie dough, really.

The dough will be sticky and on the gloppy side; this is bread dough not cookie dough. Resist the urge to add more flour as this will make the resulting bread too heavy and too dense. As it is already, this is a dense bread; after all, English muffins aren’t exactly light and fluffy croissants. Plus, homemade bread has a tendency to be denser than commercially-prepared bread, which has lots chemically-laden fluffers and puffers added to make it lighter in general. Homemade English muffin bread is denser than its storebought counterparts and adding excess flour will make a density-prone situation head into lead balloon territory. 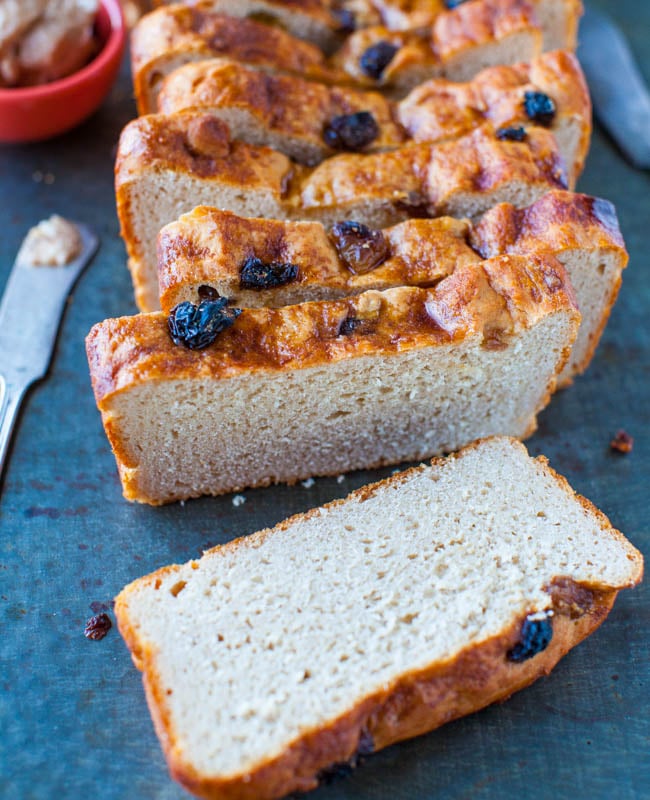 Remove the dough from the mixing bowl and without kneading it, place the gooey wad into a sprayed or greased 9-by-5-inch loaf pan, which can optionally be dusted with cornmeal beforehand for increased English muffin authenticiy, and then cover the pan with plasticwrap or a dishtowel and wait for the yeast to work their magic by allowing the dough to rise in a warm place until it’s doubled in size, about 45 to 60 minutes.

If your house is cold, a little tip to create a warm environment is to turn on your oven for one minute as if you were going to bake something at 400F. Just begin the preheating process for one quick minute, and shut the oven off. Very quickly open the oven door so that the hot air doesn’t escape, slide the loaf pan in, close the door, and voila, a toasty environment for rising. Just double-check to make sure that you shut your oven off. I hesitate to even write this because I worry someone will get confused and allow their oven to reach 400F. No, don’t do that. One minute on is all you need and shut the oven off because in that one minute, your oven will probably get up to 90F or so, a nice and toasty environment for your bread to rise in, accomplished in one minute.

After turning out the dough from the mixer and placing it into the pan to begin the one-hour rise, this is what it looked like. The dough laid low in the pan, only about 2 inches high. 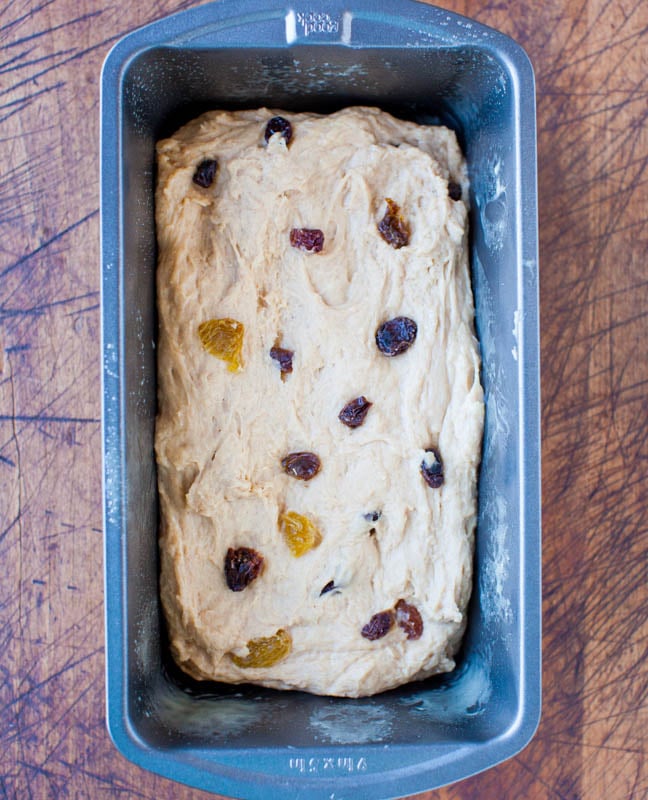 About 55 minutes later it had risen to nearly the top of the pan. 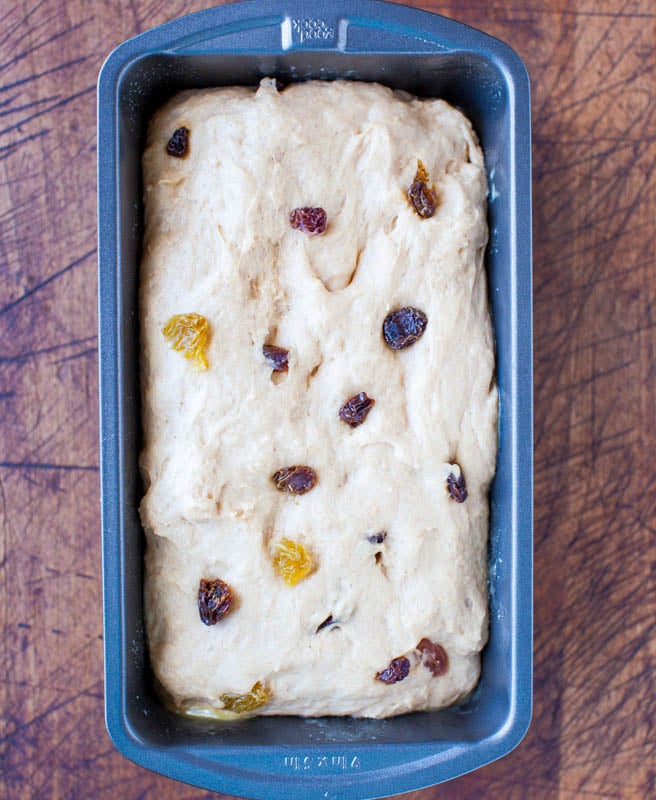 I made a mixture of one tablespoon each of brown and granulated sugars, and one half teaspoon of cinnamon, and sprinkled about half the mixture over the top of the loaf before baking.

While it baked, the cinnamon-sugar produced the most lovely crunchy, golden browned top on the bread.

The photos don’t show any crunchy topping bits on top because although I thought that my bread had cooled completely, and I wrapped it up in plasticwrap, put it in a gallon-sized Ziplock, and went to bed. However, the next morning I was ready to photograph the bread and discovered that it hadn’t sufficiently cooled and the trapped residual heat caused the cinnamon-sugar crunchy coating to melt and it turned into a cinnamon-sugar syrup. A very happy accident. 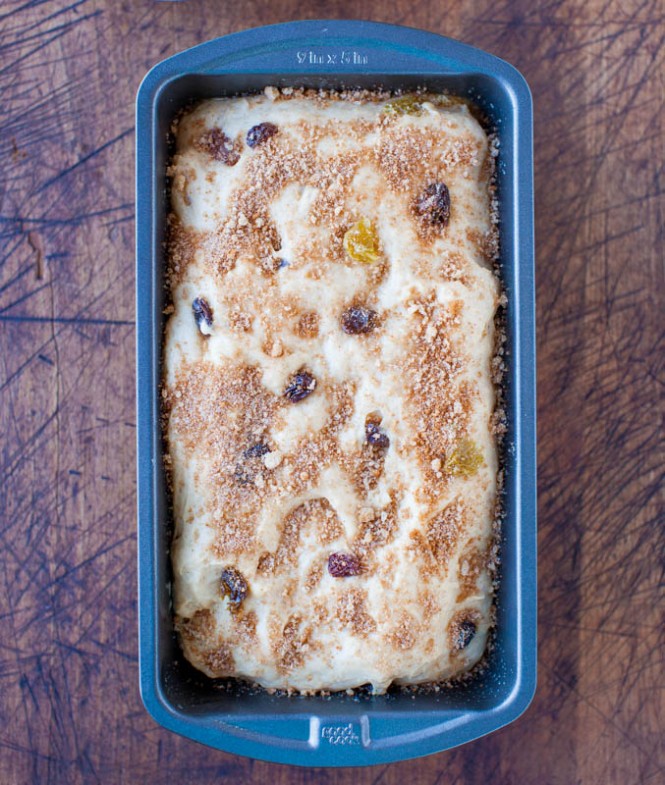 Another tip about bread-baking is that unlike cookies, which should be left on baking sheets to cool and firm up a bit before moving them, bread needs to come out of the pan or off the baking sheet and immediately go onto a rack to cool.

Also, bread isn’t considered fully baked until it’s cooled completely and all the trapped steam has been released, which is why you shouldn’t slice into hot bread as it disrupts this stage of the post-oven baking process. Allow the bread to cool completely first, thereby completing the cooking process. Plus, slicing into hot bread is tricky and you can mash down the whole loaf. However, waiting is easier said than done when you have a scrumptious baked loaf staring at you in the face and the fumes of cinnamon-sugar and bread-baking have been wafting through your house for what seems like an eternity. 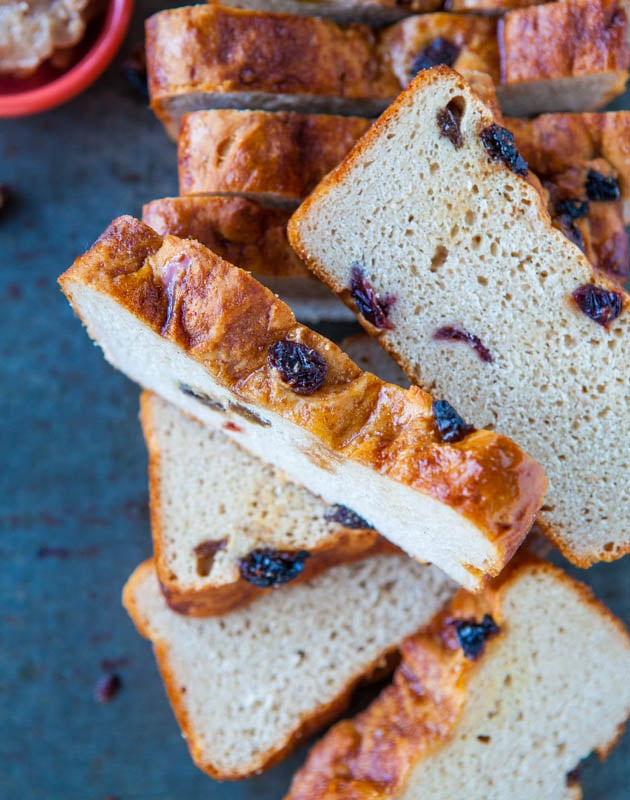 The cinnamon-sugar butter adds a special touch and comforting quality to the bread. Plus, after sprinkling the top of the bread with cinnamon-sugar before baking, there’s a bit of extra cinnamon-sugar mixture left over and the best use for it is to stir it into half a stick of softened butter, whipping and stirring vigorously so that the butter becomes puffy and whipped, in addition to being sweetly spiced.

I never want plain butter and plain English muffins again. Or storebought ones. 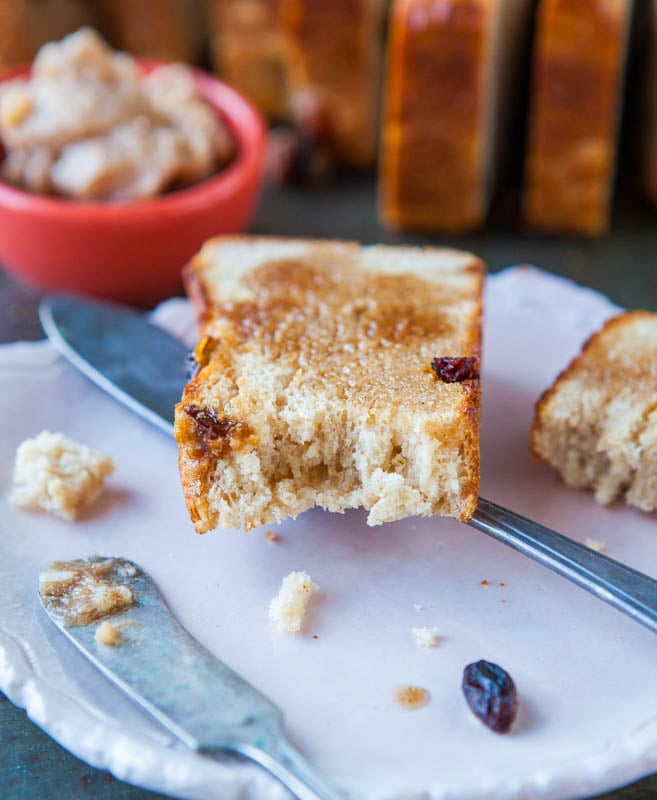 Cinnamon Sugar Crust Cream Cheese and Jelly Danish Squares – Tastes like an Entenmann’s danish, with a crispy and crunchy cinnamon-sugar coating, and are filled with smooth cream cheese and jelly. The squares use a shortcut and are a snap to make

Cinnamon Bun Pie – Best cinnamon rolls I’ve ever made (to date) and they’re ready from start to finish in less than 30 minutes. I’m working on yeast-based cinnamon rolls next

Strawberry Jelly Rolls – These start out as white dinner rolls  that I doctored up and baked, and in less than 15 minutes I was eating a warm jelly roll 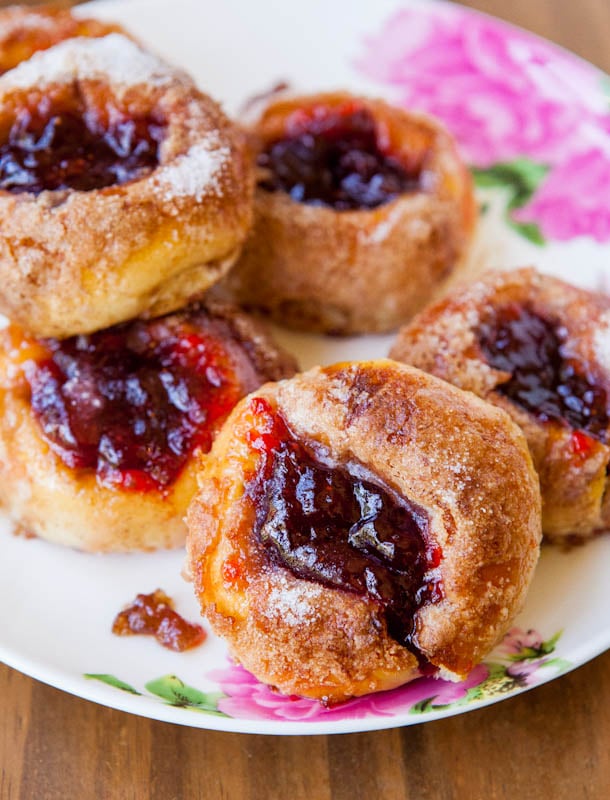 Baked Cinnamon Bun Donuts with Vanilla Cream Cheese Glaze – A cross between a Krispy Kreme donut and a Cinnabon cinnamon roll. Yeast-free and easy and although I haven’t tried it in muffin tins, if you don’t have a donut pan, try them as muffins

Cinnamon Oatmeal Date Bars with Chocolate Chunks (no-bake, vegan, gluten-free, no added sugar) – The cinnamon flavor is pprominent and the dates used to bind the bars have a raisin-like quality for the cinnamon-raisin pairing I adore. Skip the chocolate topping and the base of these bars is a perfectly healthy, no-bake, vegan, gluten-free, granola bar

Cinnamon Raisin Bread Smoothie (vegan, GF) – Tastes like drinking a glass of cinnamon-raisin bread, although no actual bread was used. Close, but not quite

Have you ever made bread with yeast?

I am learning as I go and am having a blast making bread and discovering this whole new cooking world. I’ve made a few flat loaves and some dense bricks but even the worst ‘failure’ still tastes good and we’ve eaten it all; even the less than stellar loaves are better than storebought.

I wish I had started years ago but in the meantime, I’ve been researching, googling, reading cookbooks, reading bread-making forums, practicing, playing around, and trying to soak up all the yeasty knowledge I can. We have had plenty of bread around here lately, which isn’t an awful problem. My grandma used to freeze bread and if push comes to shove, I can always try that; but Scott never met a piece of bread he didn’t inhale and I’m not having any trouble twisting his arm to eat my experiments. I also have some recipes coming up using, you guessed it, leftover bread, as well as more bread recipes coming.