This cinnamon swirl bread is as close to cinnamon buns as bread can get. Filled with a sweet cinnamon-sugar and butter mixture that swirls throughout the loaf, this is a tender, buttery, sweet bread that even novice and new bread makers can successfully tackle. 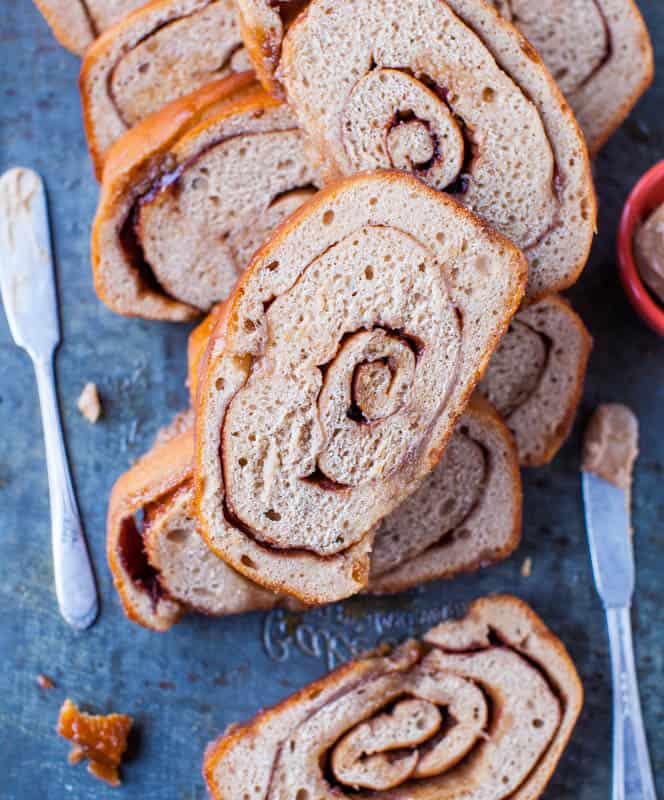 I adore cinnamon and like vanilla extract, I love cinnamon so much that I always add extra to a recipe and rarely bother measuring it. If a recipe calls for one teaspoon, I liberally shake in at least two teaspoons.

But I don’t really shake it in, I douse it in. I remove the plastic tops with the cut-out holes from my spice jars because they inhibit the cinnamon free-flow.

I’ve been on a bread-making kick lately and cinnamon swirl bread was a natural progression. Although I was tempted to make cinnamon buns, I decided that if I made and then subsequently ate an entire loaf of cinnamon swirl bread in two days, that bread would somehow be better than buns. This cinnamon bread is as close to cinnamon buns as one can get and still call it bread, rather than dessert. I’ll take all the labeling tricks I can get if it means more of these sweetly swirled slices.

I grew up on my grandma’s cinnamon rolls and cinnamon swirl bread. Drizzling her soft cinnamon rolls with frosting or buttering a slice of her fresh cinnamon swirl bread, warm from the oven, are succulent memories carved in my mind and etched onto my tastebuds for a lifetime. What I wouldn’t give now to be able to go back in time to observe her make yeast-based doughs, entirely by feel, as she was legally blind and didn’t use written recipes. I have loose memories of watching her knead dough and as a child, I just remember thinking ‘how much longer til it’s ready’. 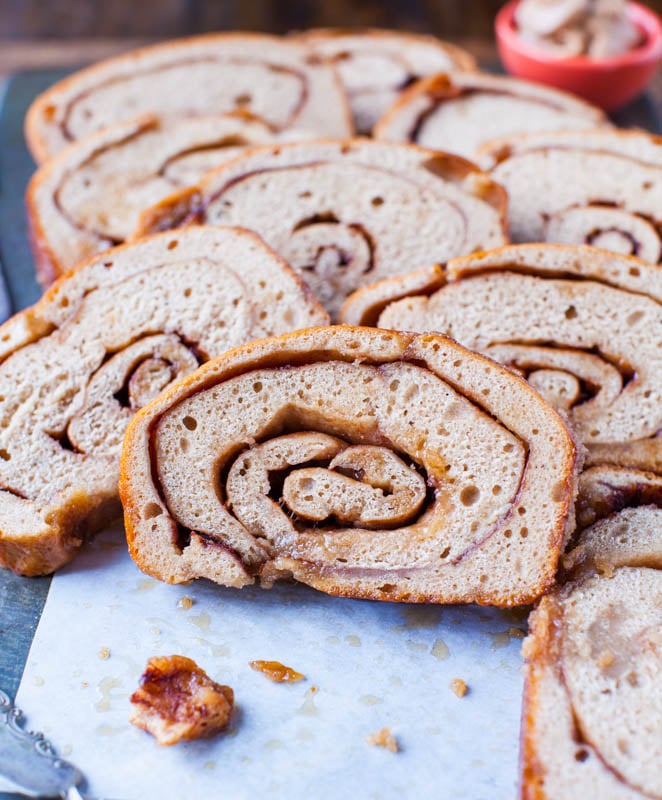 Bread-making does require patience. This bread can be knocked out from start to finish in about three hours; not bad. If you’ve never made bread before, don’t be intimidated by this one because making the dough is easy and it comes together in minutes by hand. Then, find your patience pills because the dough rises for about ninety minutes and after the first rise, the dough is kneaded briefly before being rolled out into an elongated rectangle in preparation for it’s cinnamon-sugar rub down.

I roll out the dough quite long, about eighteen inches in length, because the longer the dough is rolled, the more turns and coils can be made, resulting in more swirls in the finished bread. It’s a pet peeve of mine when cinnamon swirl bread is under-swirled and with this loaf, I took care that didn’t happen because the swirls are where the full complement of cinnamon-sugar hides. I’m no fool.

After smearing the dough with butter, cinnamon, brown and granulated sugars, and then rolling it up into a plump dough log, it’s placed in a loaf pan, seam-side down, where it rises for about an hour before baking. Baking only takes about a half hour, the quickest step of all. It’s all a very do-able process but yes, it takes longer than nuking a TV dinner. Good things come to those who wait. 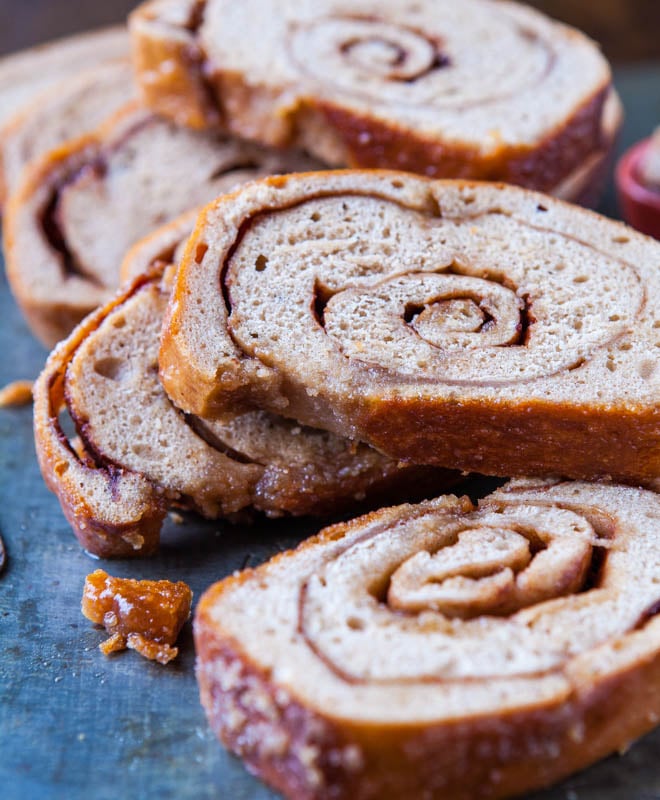 No matter how tightly the dough is rolled, while the bread bakes, some of the luxurious filling will likely seep out of the well-stuffed coils. I could have been stingier with the butter or sugars, lessening the seepage potential, but that’s nonsense. I prefer to live in buttery, sugary abundance and slathered the dough with ample amounts of both. Just days prior to baking this bread, I was watching an episode of Ree making her famous cinnamon rolls, and I took a cue from the butter master and didn’t skimp. She advises that if you think you’ve added enough butter; stop and add some more. I love her logic.

After the bread has baked, immediately turn it out from the loaf pan on a rack to cool, with parchment paper or a baking sheet placed underneath the rack. The drippy, sweet, caramelized buttery-cinnamon-sugar mixture that drained into the bottom of the loaf pan during baking needs to be redistributed back onto the bread. It will be tempting to drink that cinnamon-spiked butter sauce, or to eat the caramel bits that were created as the brown sugar and butter congeal and form a sweet, thick caramel sauce. Instead, pour or scoop the pan remnants over the top of the loaf, using a spatula as to not miss a drop of the liquid gold. Allow the loaf to cool and as it does, it will literally drip-dry, and some of the coating will magically reabsorb back into the bread. Then, wrap your sticky bundle of joy in plasticwrap before placing it inside a gallon-sized ziplock, which is how I store all my homemade bread, and it keeps for the better part of a week this way. 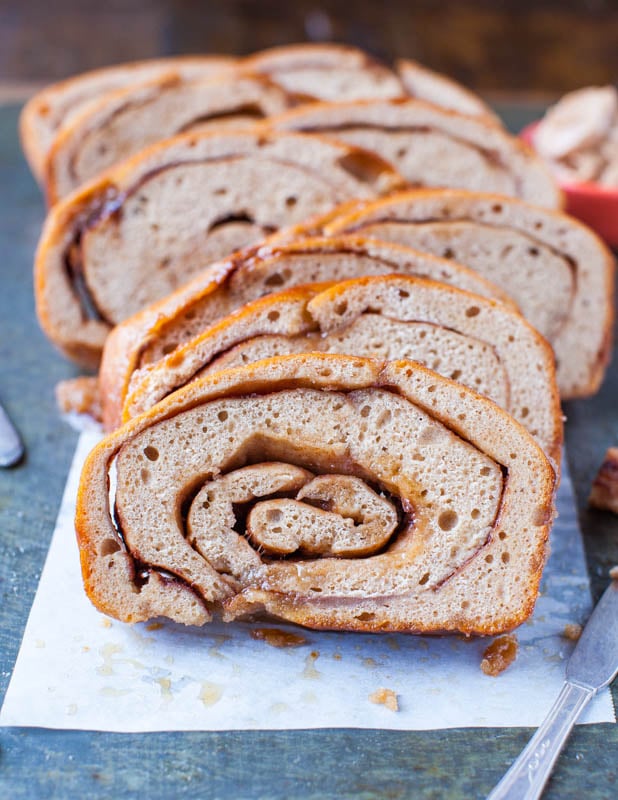 Since I am such a cinnamon fan, I used cinnamon three ways; in the bread dough itself, and of course it’s in the cinnamon swirls, and I prefer this bread toasted with ample smears of cinnamon-sugar butter piled on, to really boost the cinnamon profile. The cinnamon is complemented by the sugars; one accentuates the other, and it’s a match made in swirly bread heaven.

In terms of density, the bread is in the medium range. It’s not a light and airy croissant but it’s not anywhere near as dense as the Cinnamon Raisin English Muffin Bread, as English muffins tend to be much denser than a loaf of bread is or should be. 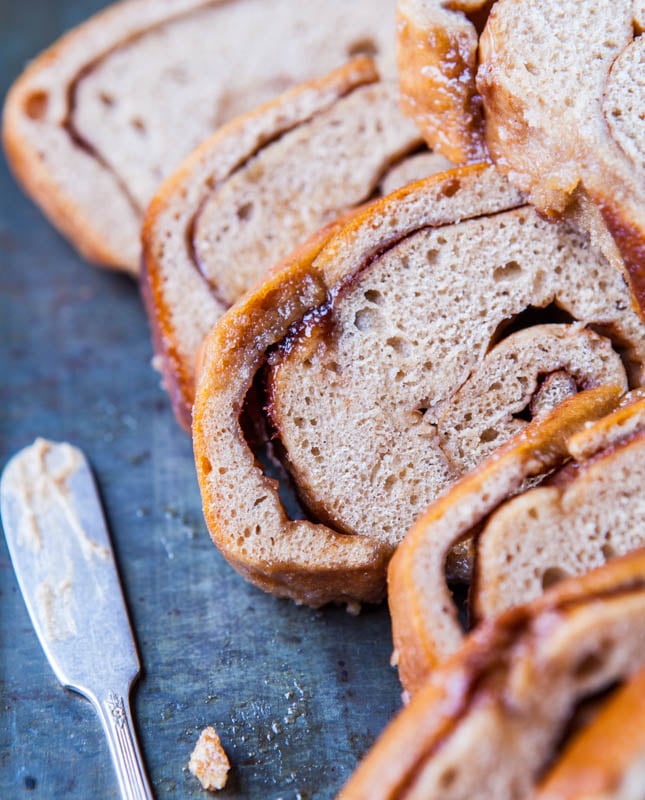 As I ate this bread, I was transported back decades earlier to my Grandma’s tiny kitchen and my childhood memories of eating her bread, slice after slice. Back then I took great pleasure in unwinding and unwrapping the coils and licking the cinnamon-sugar from them. Yes, I did. I didn’t do that with this bread, although I was tempted. Instead I just licked my fingers, which invariably become coated in the very sticky but very wonderful caramely, buttery, cinnamon-sugar sauce that seeps from the coils.

What I love most about this bread, and with all swirled buns or rolls, is the keyhole center that peers back at me, buried amidst a web of concentric circles. Let’s face it, the best part of a cinnamon bun is the epicenter; the final coiled turn. It’s the softest, most tender, moistest, butteriest, and best bite of all. And eating my way into the perfect center bites of this bread was no exception. 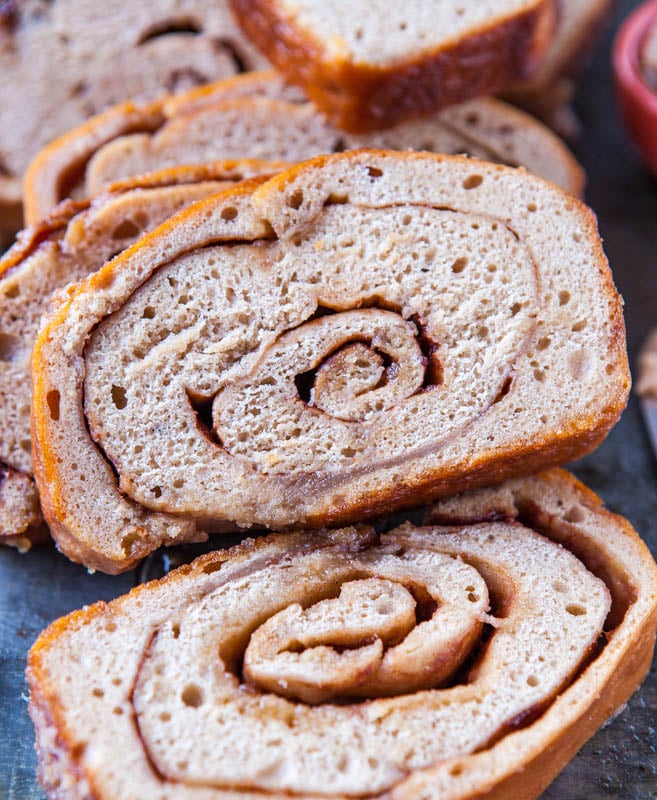 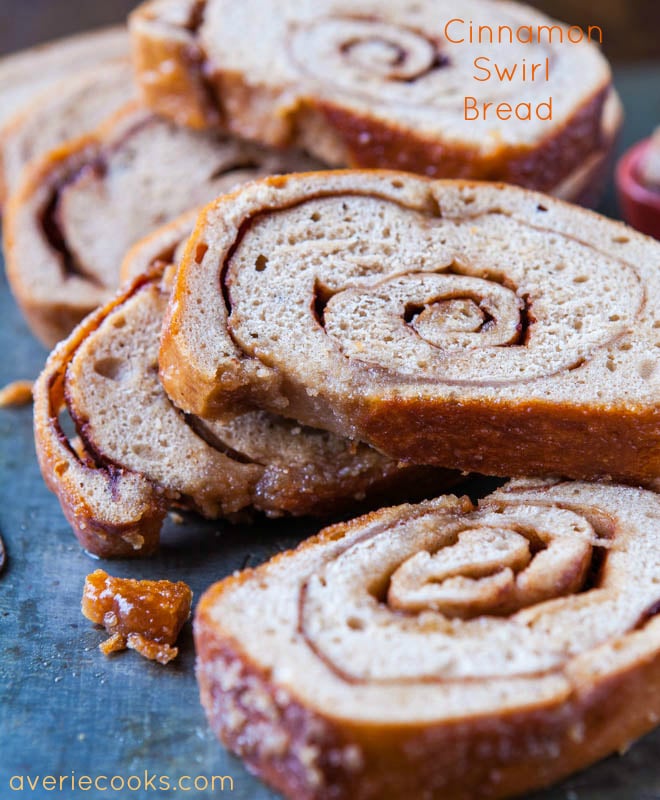 Cinnamon Raisin English Muffin Bread with Cinnamon Sugar Butter – If you’ve never made bread before, this is a goofproof, foolprood, no-knead bread recipe. You’ll never have a need for storebought English muffins again, especially because this bread is spiked with cinnamon-sugar and raisins

Cinnamon Bun Pie – Uses a shortcut and they’re ready from start to finish in less than 30 minutes and they give Cinnabons a run for their money. I’m working on yeast-based cinnamon rolls next

Baked Cinnamon Bun Donuts with Vanilla Cream Cheese Glaze – A cross between a Krispy Kreme donut and a Cinnabon cinnamon roll. Yeast-free, easy and although I haven’t tried personally tried muffin tins, if you don’t have a donut pan, I’ve had readers write saying they’ve baked them as muffins with success

Cinnamon Raisin Bread Smoothie (vegan, GF) – Tastes like drinking a glass of cinnamon-raisin bread, although no actual bread was used, and I put a graham crackers to work

Do you like Cinnamon Swirl Bread or have a favorite recipe for it?

Have you ever made bread with yeast?

Dscovering this whole new yeasty realm of baking and learning as I go has been so much fun. Even the less than stellar loaves I’ve made are better than storebought, they make great Overnight French Toast, and with each loaf, I learn something. Kind of like making cookies and with each batch, you learn something about what works, what doesn’t, and what to try slightly differently next time. The process is almost as much fun as the product. Almost.