Hi Friends!  How’s Hump Day treating you?  Mine has been good so far.  I got a workout in at my regular gym.  After trying the new gym and being less than impressed, I’m going to stay put with my current gym and try my best to make it there before Kid’s Club closes and if I can’t swing it, then I will just work out at home and do my Home Gym Workout.

I know it’s a few days late but I have pictures from our Sunday evening out.  Better late than never, right?  Anyone who blogs knows that uploading pictures for the blog ranks right up there with flossing your teeth.  Thrilling.  So sometimes delays happen because let’s face it, blogging is a hobby. I need to keep repeating that mantra, Blogging is My Hobby, Not My Job.  Ok, had to write that for my own benefit and possibly for the benefit of others.

As an aside, for those of you dealing with Blogger photo uploading issues, the photos do go into the upload tool in the “Picassa web album” section after you’ve uploaded them rather than just getting “lost” like many of us thought was happening.   However, it’s extra clicks to get to them in the Picassa section, in order to then insert the photos into your post.  Why did they have to switch uploading tools?  The other one worked just fine!

On Sunday afternoon we went to a neighborhood restaurant 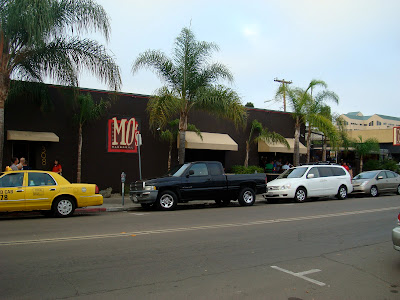 Scott and I used to go there all the time before Skylar and I hadn’t been there in, oh, 5 years.  We were long overdue.

I had a drink, the John Daily.  There’s my Sweet Tea Vodka I’ve been loving since recently discovering it. 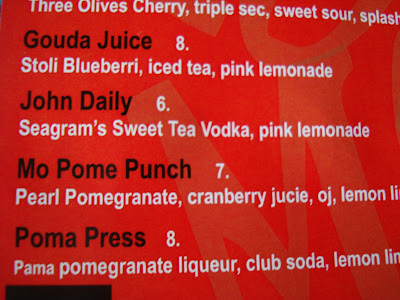 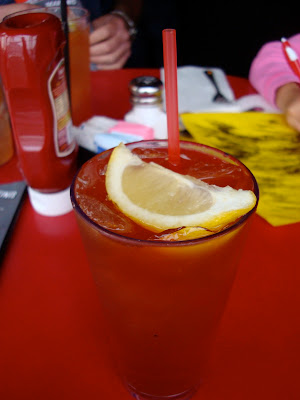 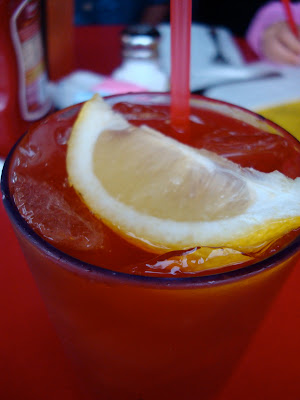 Scott ordered a lemonade + iced tea and some chicken tortilla soup with I kid you not, an entire avocado sliced on top.  Pictures snapped after they got busy on the soup so avocado is not shown because… 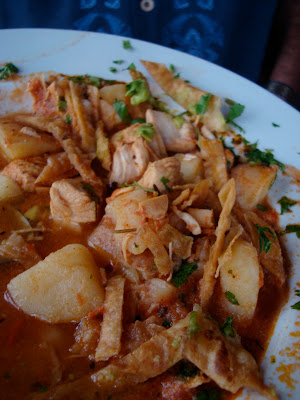 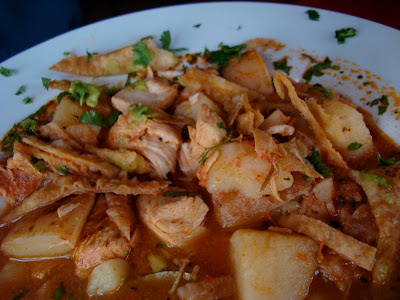 …Skylar ate the whole avocado, herself.  With some tortilla strips and potato chunks.    She is an adventurous eater and I am so glad I don’t have a “picky eater”. 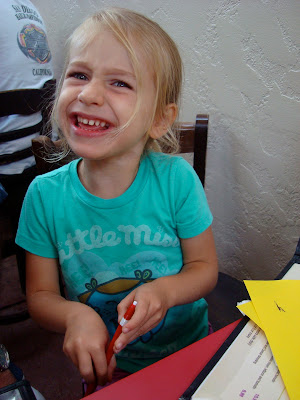 The restaurant was jumping because there was Sunday football games on, and Sunday night is industry night and so everyone in the service industry who has to work weekends and who was just getting their weekend started was apparently at Mo’s.  Various football fans, and the neighborhood clientele were out in full force. 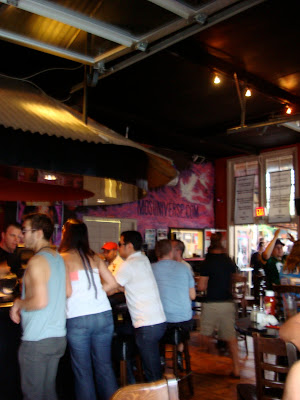 Plenty of blow up monkeys were handed out 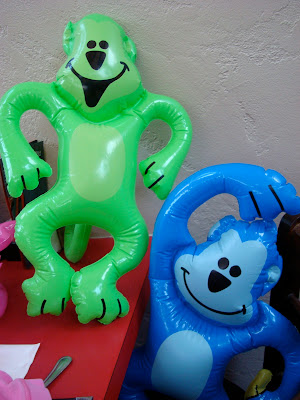 I love how the crown painted on the wall is perfectly positioned above my head.  Totally unplanned.  Scott the photographer is no Ansel Adams, trust me.  Blind luck..haha! 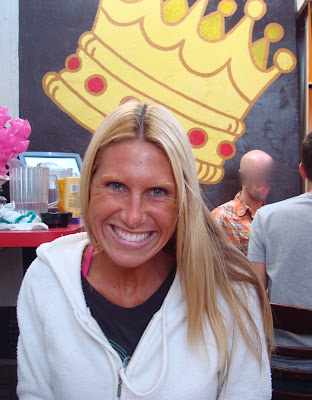 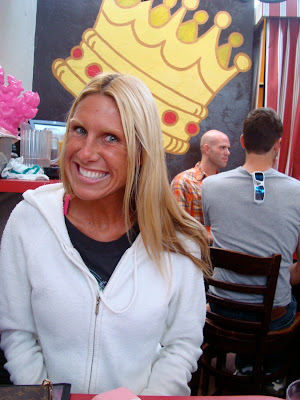 Here’s Skylar’s Crown she was given 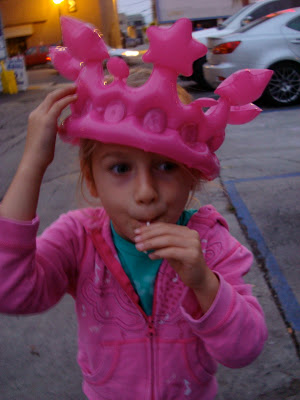 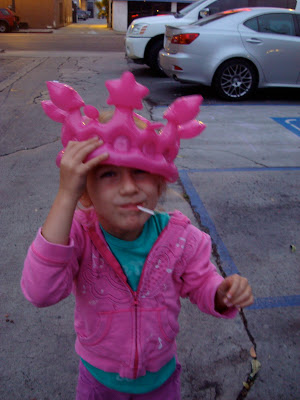 Wearing her crown in the parking lot while working on her sucker.  A great night in kiddie world.
It was great to get out with the family and not go to Chuck E. Cheese’s.  Sorry, I can’t handle those types of places so we go to venues where the adults, i.e. Scott and I, can enjoy ourselves, too.  Skylar’s busy coloring and watching the traffic go by.  What does she care, especially when pink crowns are handed out. 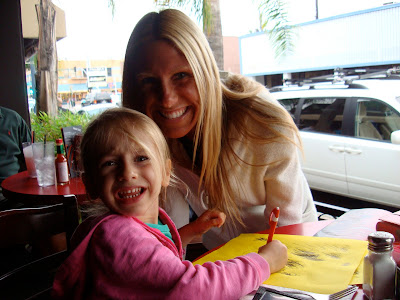 From yesterday’s post, thanks for telling me about your fave crockpot recipes! 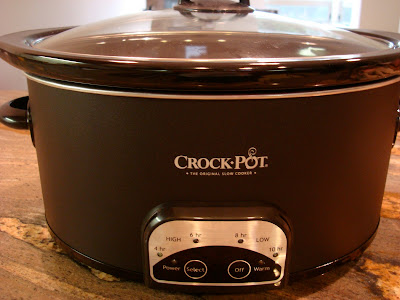 I ended up making vegan chili in mine and will post the recipe in a day or so.  Turned out fantastic!  Especially for my first ever crock pot cooking attempt in my brand new crock pot.

And thanks for chiming in on if you’re an online shopper or not, and what you like to buy.  Most of you do like to click-click-click, buy-buy-buy from the comforts of your own home unless of course the shipping charges are going to be insane.

Dessert/Snack: Vegan Gluten Free Cinnamon Raisin Banana Oatmeal Muffins
One bowl + spoon.  Mash and stir, pour into muffin liners.  Highly adaptable based on what you have on hand but a great way to use up ripe bananas. 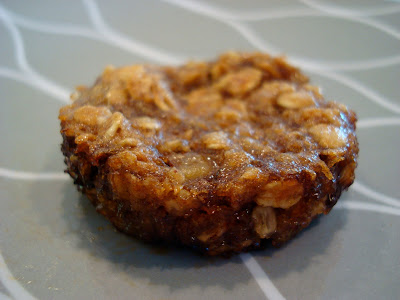 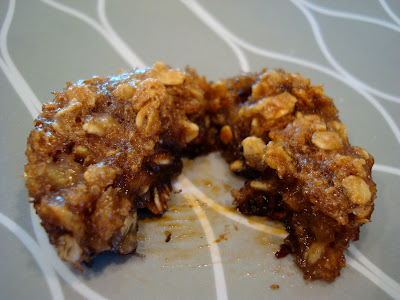 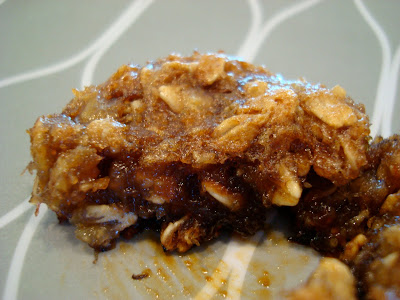 Questions
1. Do you know anyone who’s a picky eater?  What do you attribute it to?

I think exposing kids to a variety of foods prevents a lot of “pickiness”.  From raw vegan to sushi to Mexican to raw broccoli, you must expose.  I have read in parenting books it make take over 20 attempts/exposures to get a kid to eat something.  So that doesn’t mean the first time they balk at cauliflower or green beans or spicy tortilla soup that you should never try again or expose them to those foods again.  20 times.  I think that rule also applies to picky significant others or family members, too!

Also, not saying, “Oh you won’t like this soup because it’s too spicy for you” before the kid even tries it is also key.

Just my thoughts though; sometimes parents do everything “right” and the kid is still picky.  We all have our unique crosses to bear as parents.  For some it’s raising a picky eater and for others it’s raising a shy child or a spirited child or whatever.  No one ever said parenthood was easy or came with guarantees!

2. Have you ever been to a Themed Restaurant?  Do you like them?
When we used to live in Myrtle Beach, the Nascar Cafe used to have a wait to dine there.  We never made it to that one..oh, darn.

And I am not big on Chuck E. Cheese and kiddie-themed restaurants.  Chaos much?  Too overstimulating and also, it encourages the pizza, or fries/burger, or fries/chicken nuggets as the “only” foods to serve to kids.   Not bad for others, just not the path we are traveling down so we don’t patronize places like that.

For adults, there are popular Renaissance Fair type restaurants and although it’s great to watch jousting and talk in an Old English accent, I just don’t enjoy that much “hoopla” surrounding mealtime.  I just want to chill if I am paying for a meal out.  There’s plenty of “hoopla” at home; I don’t need to go out and pay for it.

So I guess, I am not a Themed Restaurant fan.   Not saying they’re bad, just not my scene.   How about you?  If there’s a fun one, fill me in on your faves!

3. What’s your idea of a great evening or time out?
Back in the day, mine included going out with Scott and plenty of drinking ensuing, staying out until the sun came up and dancing, singing, laughing with friends, and just basically being young and crazy.  If I didn’t have Skylar, I suppose I  may still partake in a few evenings like that here and there, but morning come early and no one is getting up to fix a toddler breakfast other than me.  So no time for hangovers!

These days, just keeping it mellow, being together, laughing, watching Skylar try new foods, being out in public just people-watching, that’s fine by me.

« Previous PostCrock Pot Purchase, Need Crock Pot Recipes, Online Ordering Favorites
Next Post » Vegan Crock Pot Chili, What Do You Like In Your Chili or Soup?

One Comment on “Evening Out Pictures, Picky Eaters, Themed Restaurants”