Fruit Seed and Nut Crackers are customizable, easy, crunchy & healthy! They begin as a loaf of hearty and dense bread, made with sunflower and flax seeds, raisins, and a variety of nuts. 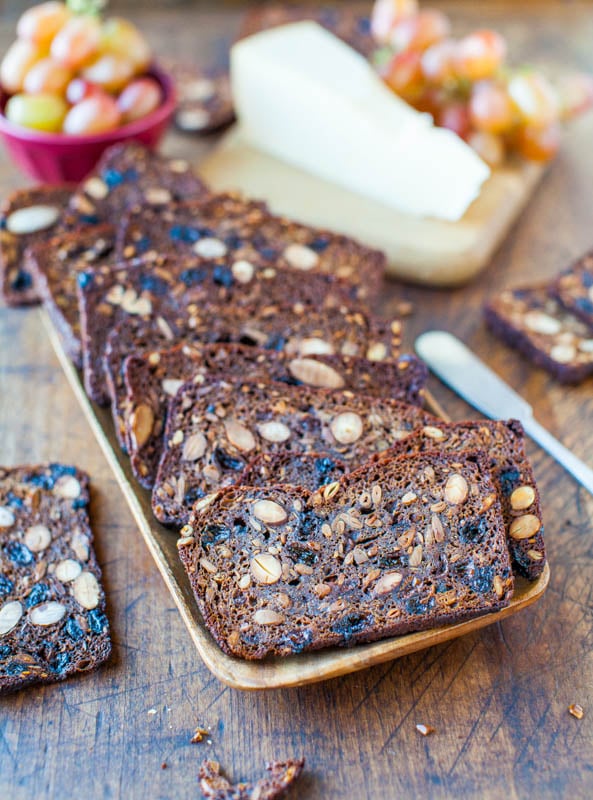 I’m a major fan of crackers of any sort. Except really expensive ones.

Rather than fork over big bucks for a tiny package of gourmet crackers, I decided to make my own.

It’s been nearly three years since I posted my last cracker recipe for imitation Mary’s Crackers when those crackers were all the rage. I kept those vegan, gluten-free, and they’re made from seeds only. I got sick of paying $4.99 for a box I could eat in a day and necessity was the mother of invention. It’s a customizable recipe that can be taken sweet or savory, mild or wild, based on preferences.

Today’s crackers are also customizable. Choose your favorite dried fruit, seeds, nuts, and mix-and-match with what you have on hand. Make them sweet, savory, spicy, a mix of sweet ‘n savory and have fun.

The crackers start out by making a loaf of quickbread, letting it cool, slicing it very thinly, and then baking the slices until crispy. This two-step baking process is the secret to getting homemade crackers really crispy. In the past, no matter how thinly I rolled the dough, or how long I baked or dehydrated them, they never got as crisp as I hoped. Problem solved. 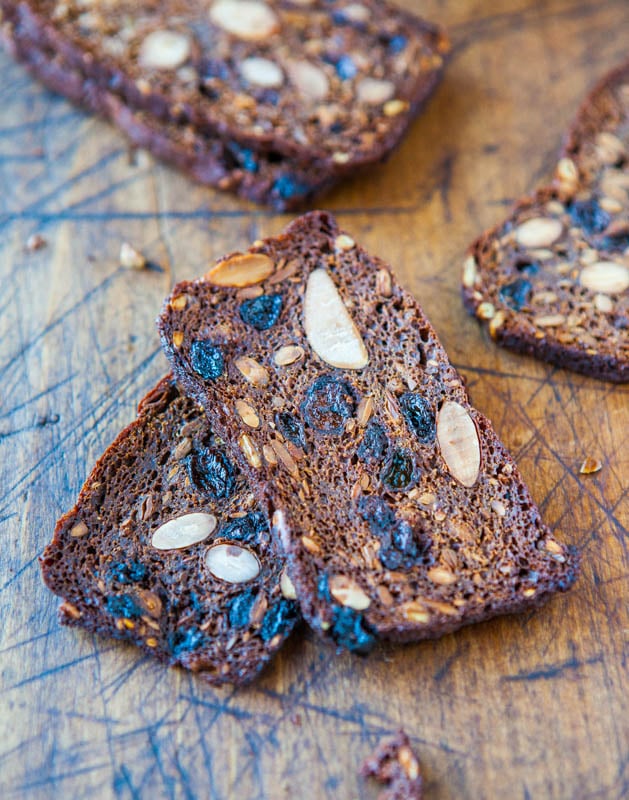 The bread comes together with one bowl, by hand, in minutes and is so good on it’s own that I almost didn’t want to bake it into crackers. Based on how easy and fabulous it is, I am definitely going to use this recipe for snack-bread and toast.

To make the bread, I combined two cups of flour with brown sugar, honey, a bit of molasses, baking soda, and then poured two cups of buttermilk over the top. I used one cup each of bread flour and whole wheat flour. I suggest not using more than half the total amount of flour as whole wheat since it’s trickier to get all whole wheat bread to rise, even as a quickbread.

Stir until the batter has just combined and it’ll be both lumpy and fluffy. Buttermilk is such a workhorse when it comes to fluffing up bread batter. 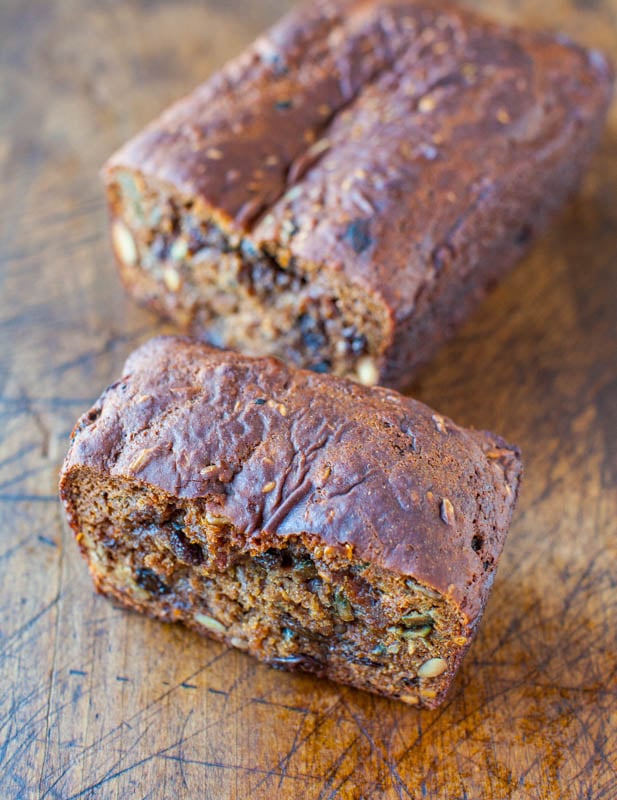 Now add the add-ins. I find 1 cup of dried fruit, 1 cup of small seeds, and up to one-half cup nuts is a nice balance.

For the small seeds, I used three-quarters cup roasted salted sunflower seeds and one-quarter cup whole roasted flax seeds. I wouldn’t use ground flax as it will thicken and bulk the batter, which isn’t what I wanted; I wanted the texture and flavor. I would also stay away from chia seeds for this reason. Try sesame seeds, pepitas, millet, pine nuts, or puffed amaranth.

For the nuts, I used one-third cup total, and it was mostly whole roasted salted almonds, with a few cashews and filberts that were lingering in the bottom of a can of mixed nuts. Try macadamia, peanuts, walnuts, or pecans.

Optionally add spices and seasonings based on the direction you’re going, from sweet to savory to spicy to herby. Cinnamon, cardamon, nutmeg, and ginger; to garlic, curry, onion, cayenne, chili powder, or chipotle. Fresh rosemary, basil, oregano, thyme, or dill. Because of the saltiness in the buttermilk, coupled with the salt in the add-ins, I omitted salting the batter. You could always sprinkle coarse sea salt on after baking if desired. 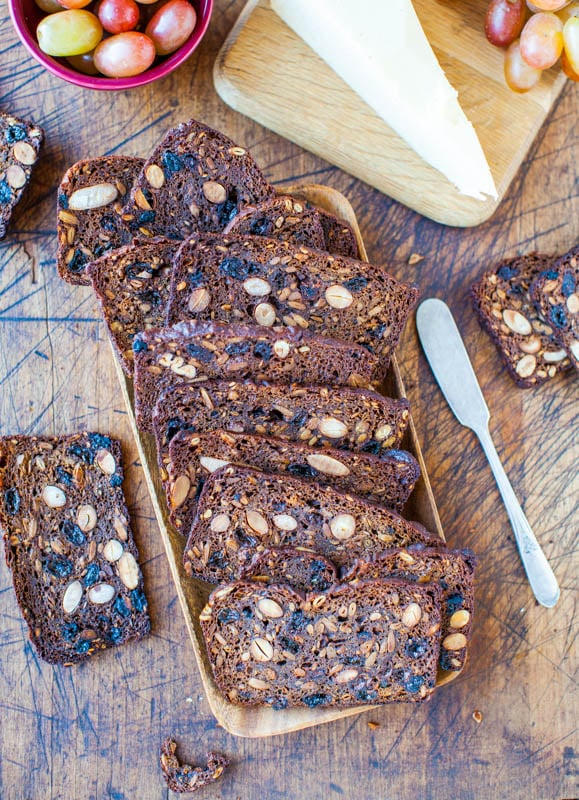 After folding in the add-ins, transfer batter to a sprayed 9-by-5-inch loaf pan or two 8-by-4-inch pans. Based on the volume of batter I had, I baked it in one 9×5 pan but would opt for two 8×4’s next time. If you’re adding significantly more add-ins than the 1 cup/1 cup/half-cup, use two pans. My loaf rose within one-quarter inch of the top of the pan while baking, and for a minute I thought there was going to be an overflow situation, but all was well. Also, with baking in one pan you run the risk of the outside getting too dark before the inside cooks through because this is a dense and well-stuffed batter that takes longer than typical breads to fully cook through.

Bake for 45 to 60 minutes in one loaf pan, or less if using two pans, or until a toothpick comes out clean. In order for my loaf to cook through in the middle, I had to bake it for one hour, and the top and sides did get pretty browned, even with tenting it with foil in the back half of baking. However, this is a rare situation where overbaking isn’t a bad thing because you’re going to slice the bread and bake it again to turn it into crackers. 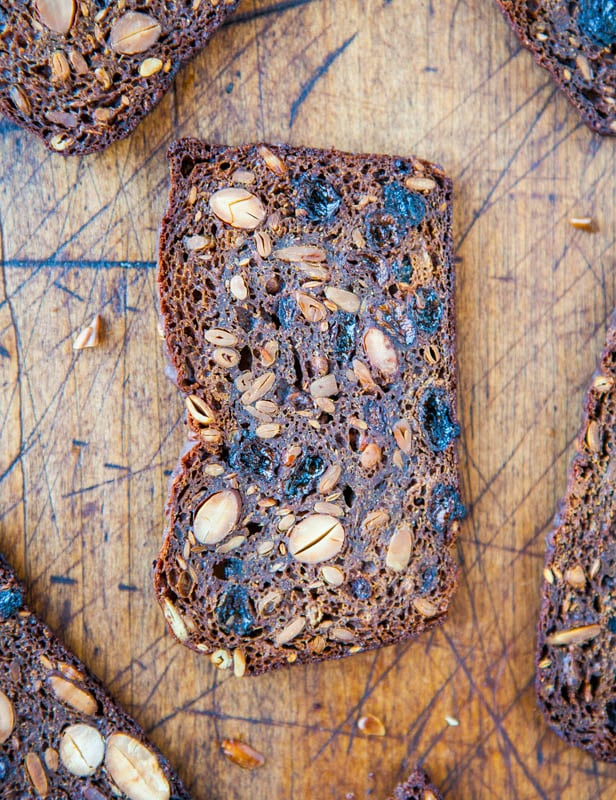 Allow the bread to cool for at least four hours, or overnight, or even let it linger for a couple days. When the time comes to slice it, you want cool, firm bread, which is the easiest to work with in order to slice it very thinly. Place the loaf in the freezer for an hour or so in advance of slicing it, which will help it firm up. Don’t let it freeze solid, which will make slicing impossible, just chill it well. Slice the bread with an uber-sharp serrated knife, creating slices as thin as possible. Using a mandolin is an option, but the last time I used one I almost lost the top quarter inch of skin on my thumb and I’ve been gun-shy ever since. Plus with the weight of the loaf and how you’d have to slide it on the mandolin, you’d really have to be quite skilled with the finger-shaver in order to attempt it.

I made thirty slices and they’re about one-eighth inch thick. Some are thinner, some are thicker, and sometimes my knife would hit a big nut or a raisin and the slice would get a little too thin or too thick in a patch but these are artisan crackers. Homemade isn’t always uniform and therein lies the beauty.

Transfer the slices to parchment or Silpat-lined baking sheets, arranged as closely as possible without touching. I fit 12 slices per sheet. Bake them for about 30 to 45 minutes at 300F, or until they’re nice and crispy, flipping them over a few times. Note that the bread as a whole loaf bakes at 350F, but after slicing it, use a 300F oven. I baked the slices 15 minutes, flipped; baked for 15 minutes, flipped; baked for 15 minutes and they were done. Baking time is highly dependent on the add-ins used, the thickness of the slices, and personal preference. 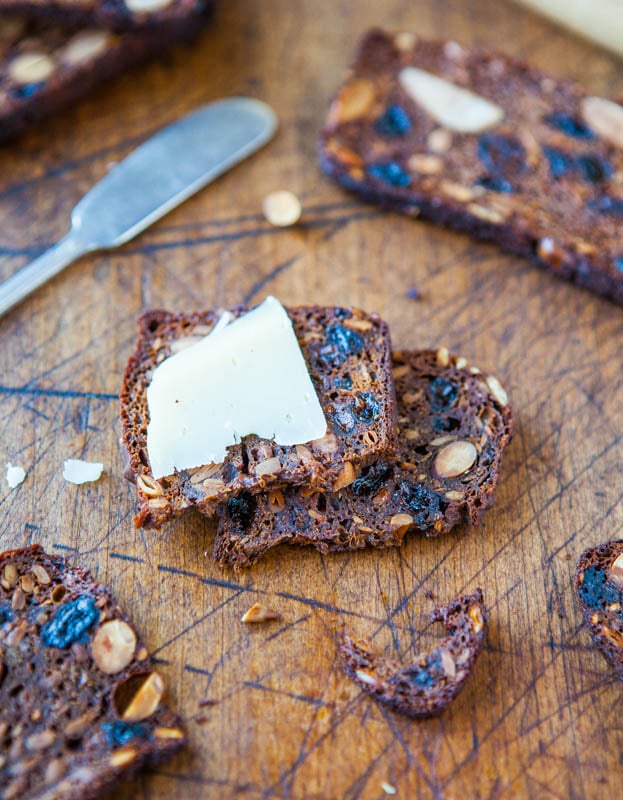 They’ll keep in an airtight container for up to week or so, but may lose some crispiness if you live in a humid climate or as time passes. However in San Diego, they were as crisp on day 7 as they were on day 1; actually more so since the air here served to dry them out even more. This is bad for cookies, great for crackers.

Since I’m a texture fanatic, the crunchy sunflower seeds, the medley of nuts, chewy raisins, the tiny flax seeds, all lend a ridiculous amount of flavor, texture, and snappy crunch. The saltier seeds and nuts, against the sweeter raisins, brown sugar, and gentle sweetness from the honey was a beloved salty-and-sweet combo.

Although the molasses wasn’t distinctly noticeable, it always adds depth of flavor, fullness, and richness to anything it touches. Here is also serve to give the crackers a deep, earthy, ruddy brown color, which make them look infinitely healthier than a white Saltine.

In this application, I enjoyed the nuts and they provide richness, protein, healthy fat, and give these crackers some oomph. If you could ever get full from eating crackers, these are how. 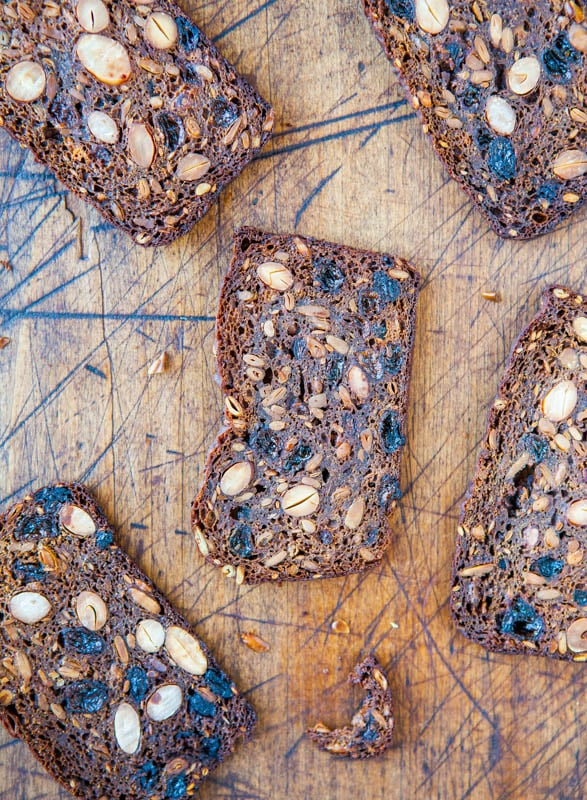 Top them with a slice of cheese, a smear of cream cheese or goat cheese. I made a batch of Creamy Tomato Soup and had a little soup with my crackers.

They’re exceedingly crispy and crunchy. I baked the slices for about 45 minutes, and probably should have stopped after 30 but in the past, I’ve unintentionally under-baked crackers and wound up with something in between bread and crackers. Too hard to be bread, but too soft to be crackers, and not at all satisfying so I baked these until I knew they were good and cripsy. You can hear the crunching sounds a mile a way.

For a homemade cracker, especially one loaded with nuts, seeds, raisins, and that started out as a heavy, dense quickbread, the crackers are quite light. I’ve never been able to get homemade crackers as light and I attribute that to the baking soda, buttermilk, and two-fold baking process. 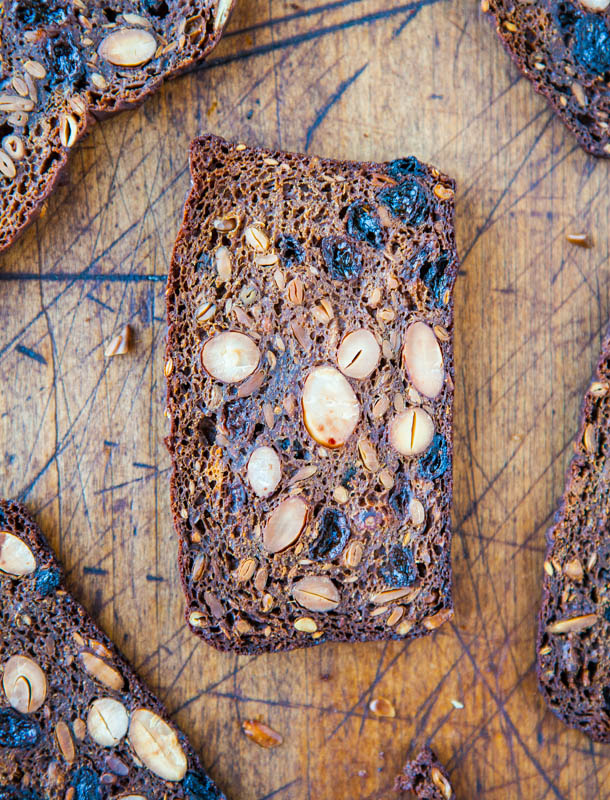 Thirty large crackers made for just a few bucks renders them a tiny fraction of the price of storebought. I used what I found in the Trader Joe’s seeds, nuts, and dried fruit aisle; as well as what I had on hand.  nd in the process, I cleared out some odds and ends. If you choose to use organic dried mulberries, macadamia nuts, pine nuts, and artisan roasted pepitas, seasoned with a few saffron threads, your cost will be significantly more. No matter what you use, they’re going to likely be tastier and healthier than storebought.

I can’t wait to try these with umpteen different add-in and flavor combinations and until then, if you hear crunching sounds a few states over, you know where it’s coming from. 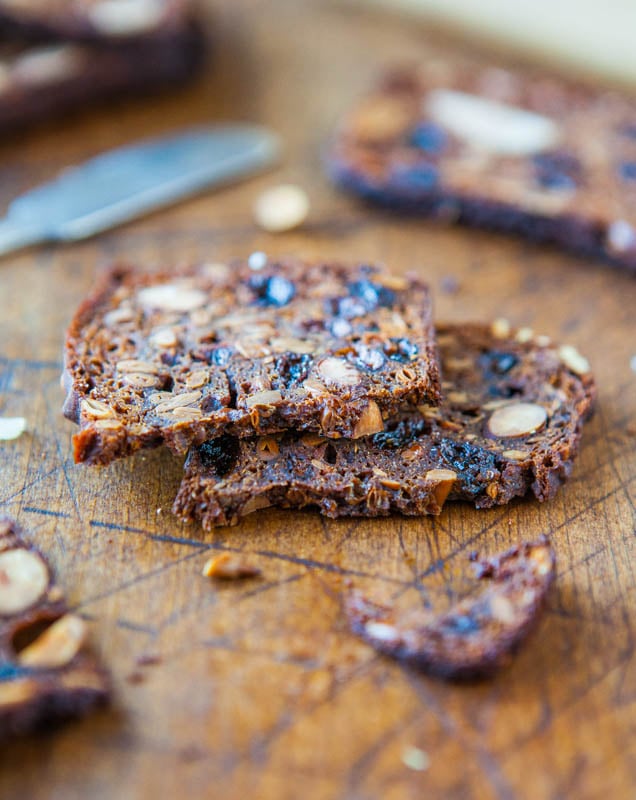 Seeds Only Crackers (vegan, gluten-free) – Inspired by Mary’s Crackers, these at-home knockoffs are customizable and can be made sweet or savory, spicy or not. They’re made from just seeds; no nuts. When I was strictly vegan, all the nuts, all the time, were just too much and it was my goal then to keep these nut-free 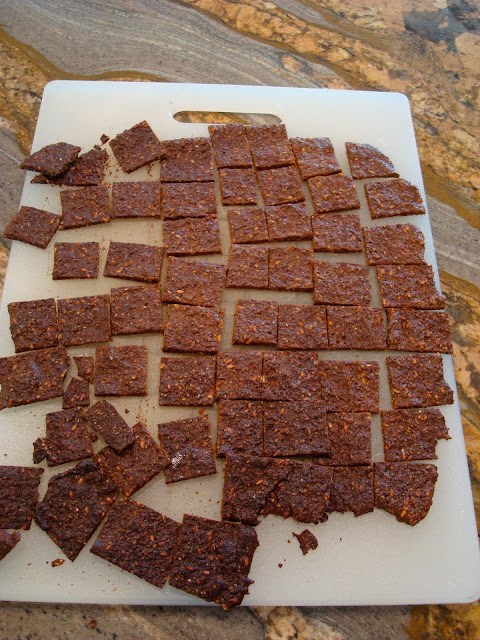 Roasted Grapes and Balsamic Reduction with Cheese and Crackers – Roasting fruit when it’s a bit past it’s prime is a great way to save it and in the process, bring out the natural sweetness. Top it onto crackers or bread and serve with your favorite sauce 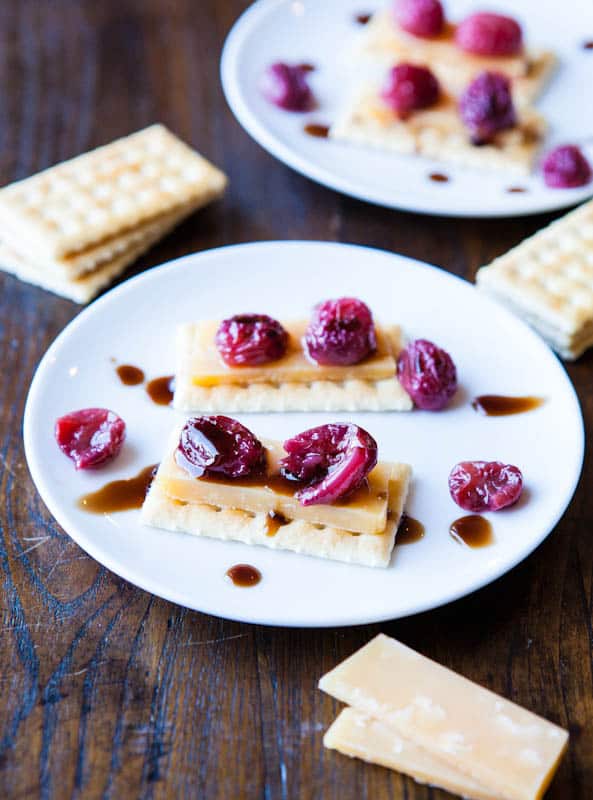 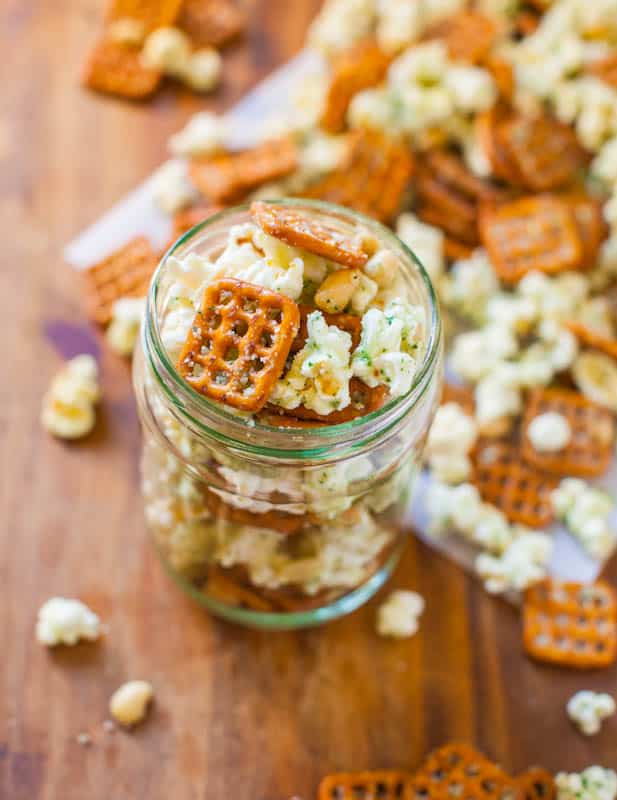 Cheezy Kale Chips (raw, vegan, GF) – My hands-down favorite kale chip recipe. This is the only coating you’ll ever want on kale after you try it. Roasting kale in the oven without a coating just turns the leaves into burnt dust so you have to coat them. Excuse the vintage photography because I assure you the recipe is a keeper 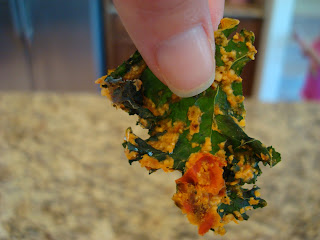 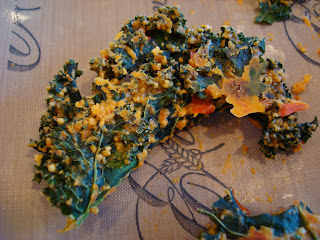 Chocolate Coconut Kale Chips – (vegan, GF) – Even those who can’t get into kale could get into it drenched in a chocolate-coconut bath 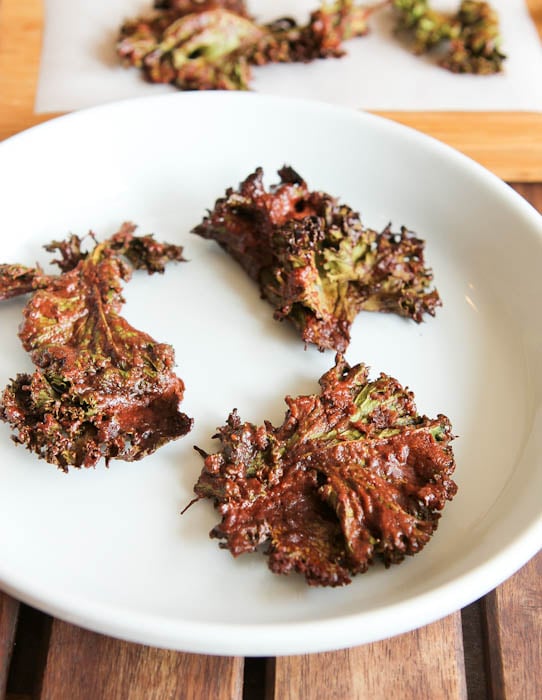 Outback Steakhouse Wheat Bread {Copycat Recipe} (vegan) – This wheat bread is based on the restaurant bread I love, and has touches of honey, molasses, and is soft and chewy 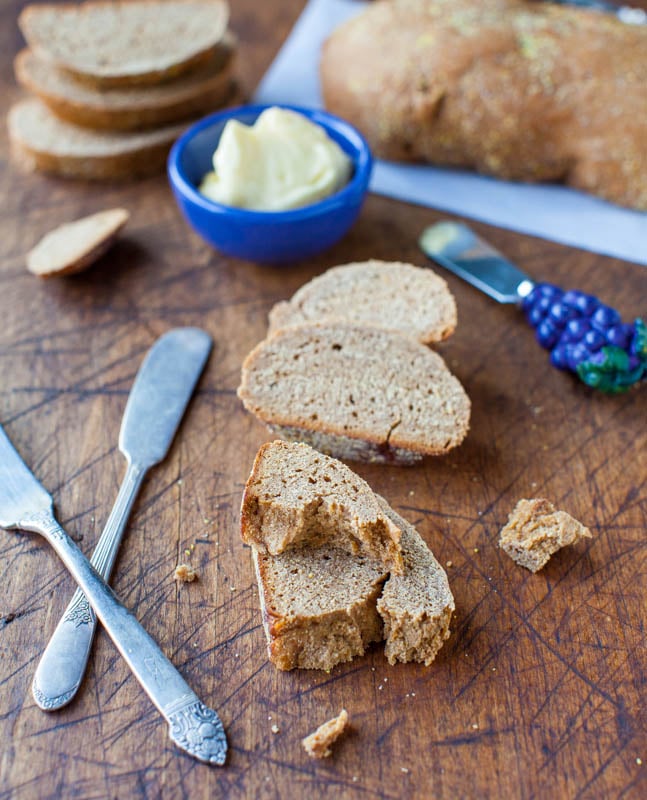 Rosemary Chipotle Roasted Almonds – (vegan, GF) – Can’t go wrong with a roasted and seasoned nuts. These have a bit of a kick 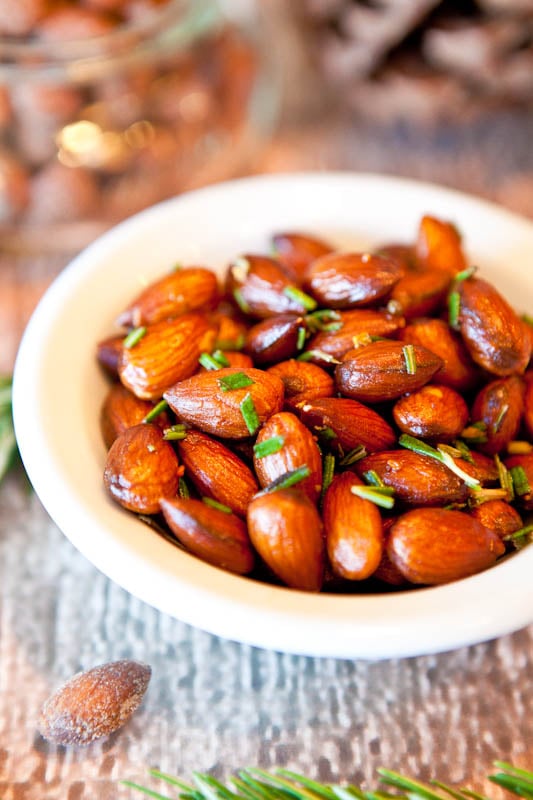 Cinnamon Sugar Chocolate Pretzels (no-bake, vegan, GF) – Make in 5 minutes and one of the best things I made in 2012 on the work-reward scale according to my husband 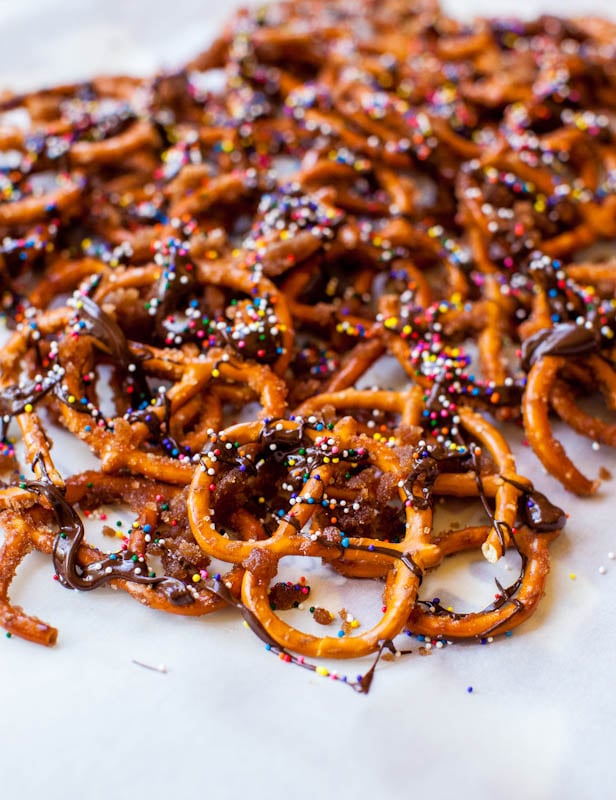 Have you ever made crackers, crisps, chips, nuts or a favorite snack mix?

Feel free to link your favorites. I love them all and am always up for something crunchy to snack on.