S’mores Brownie Pie — No campfire? No problem! This brownie pie is made with fudgy brownies topped with toasted marshmallows and graham cracker crumbs. Best s’mores ever! 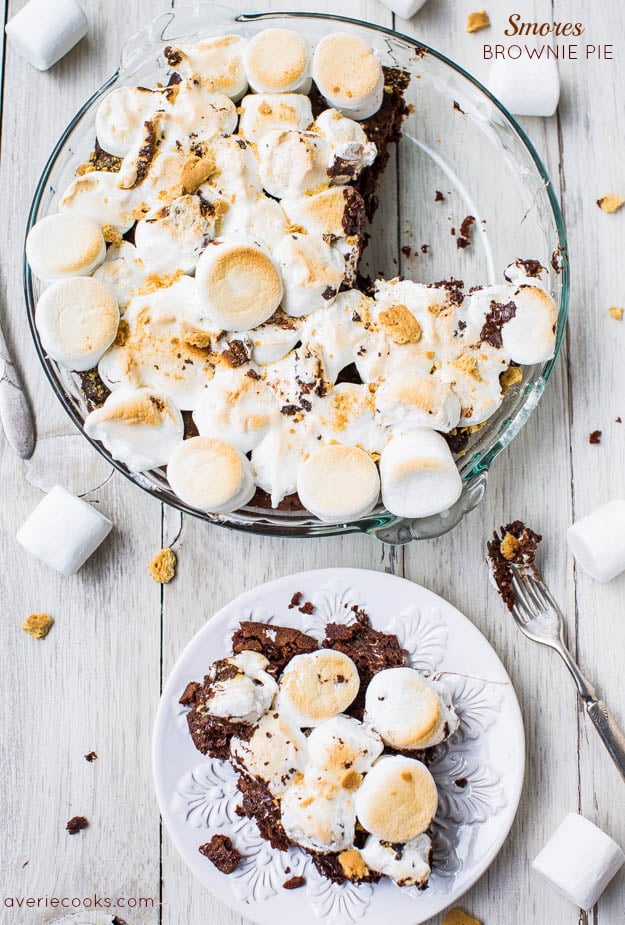 No campfire handy? No desire to ever sit around a campfire? I totally understand. Make indoor smores instead.

Unless you’re really into camping or are lucky enough to have a backyard firepit, smores over a campfire isn’t the norm for most of us. Luckily, most of us have ovens with broilers.

Plus I have no patience to roast my marshmallows evenly and dip them directly into the fire. They turn black, I blow them out, and call it good. But that’s another reason I prefer the broiler and it only takes 1 minute. 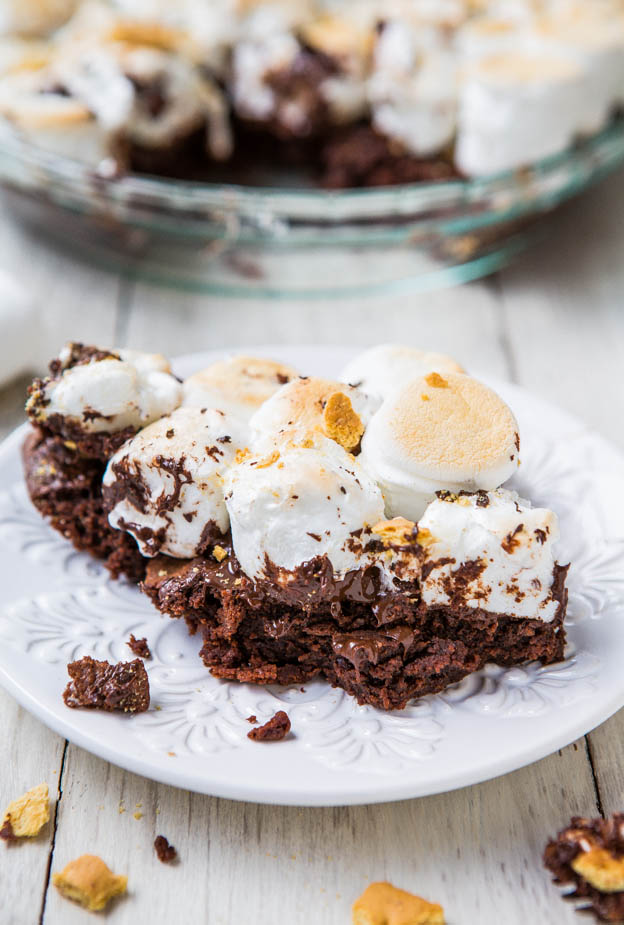 Each bite of the smores pie is so satisfying. Dense, fudgy, rich brownies topped with melted chocolate chips, fluffy gooey marshmallows, and sprinkled with crunchy bits of graham crackers.

It’s a fast and easy dessert to make, and ready from start to finish in about 30 minutes. Pop it in before dinner and as you’re finishing up, dessert will be ready. 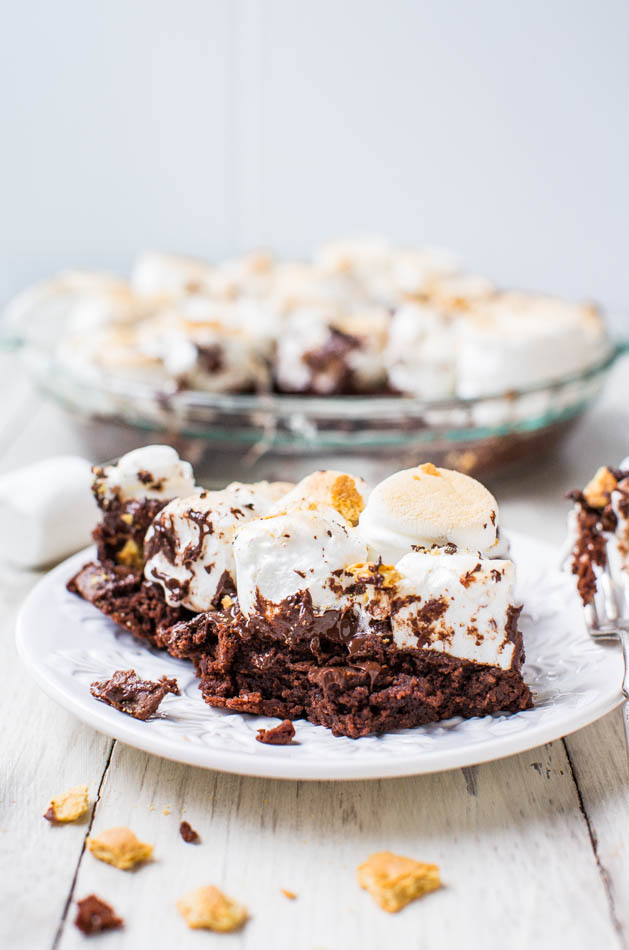 My daughter demolished half the pan, pulling just the toasted marshmallows off of the brownies and eating them. I donated the other half to friends and got rave reviews and it was deemed the ‘best smores dessert ever’.

And you don’t even have to leave your cozy kitchen to enjoy. 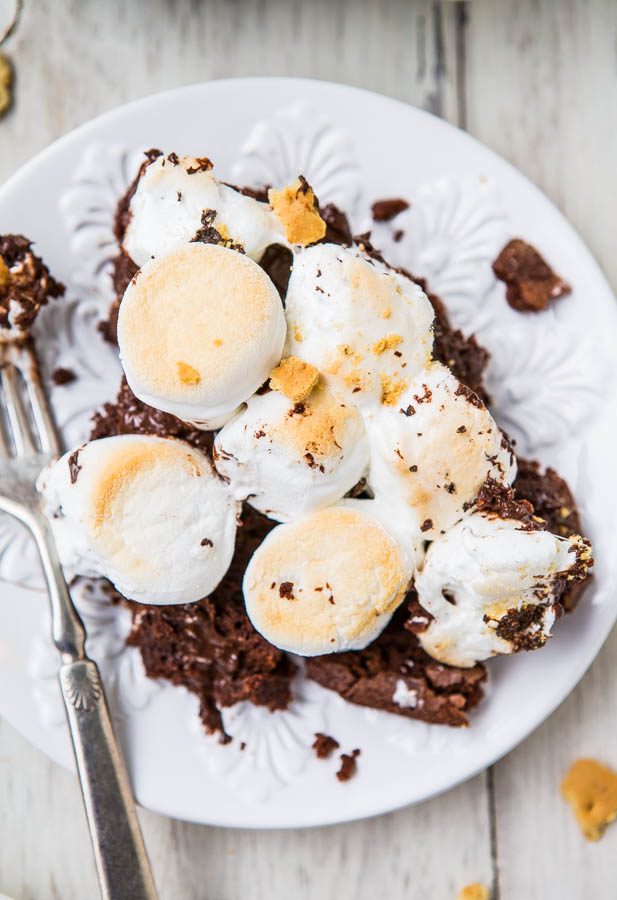 What’s in the Smores Brownie Pie? 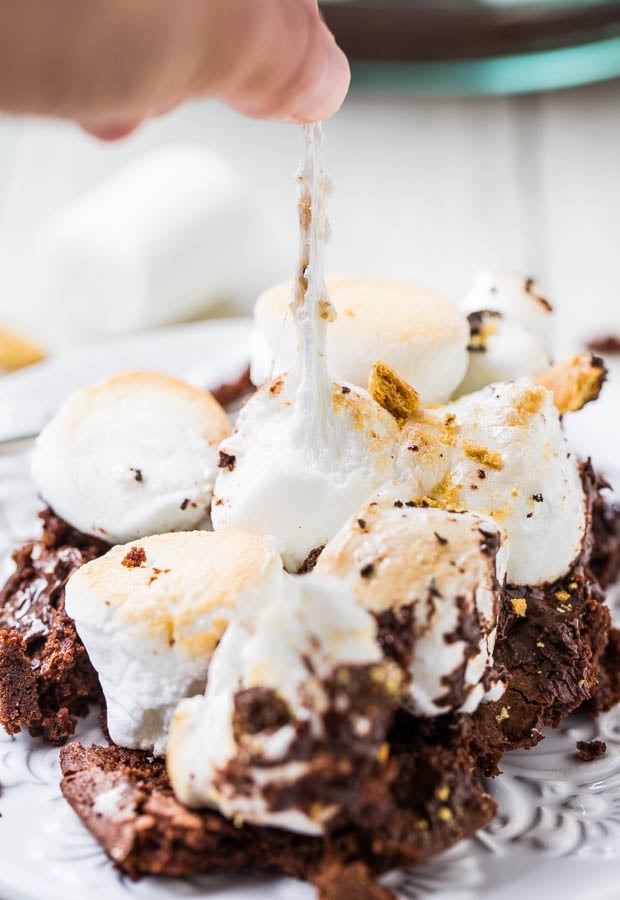 How to Make Smores Brownie Pie

Begin by making the brownie base. It’s an easy whisk-together batter and the brownies turn out very fudgy with slight chewiness around the edges.

I didn’t use any of my standby brownie bases and made this one up on the fly. I wanted a fairly shallow, thin layer of brownies that was fudgy and not cakey, and got exactly what I was hoping for.

After baking the brownies, sprinkle with chocolate chips, top with marshmallows and broil for about 1 minute.

After the marshmallows are toasted and puffed, sprinkle with crushed graham crackers and dig in. 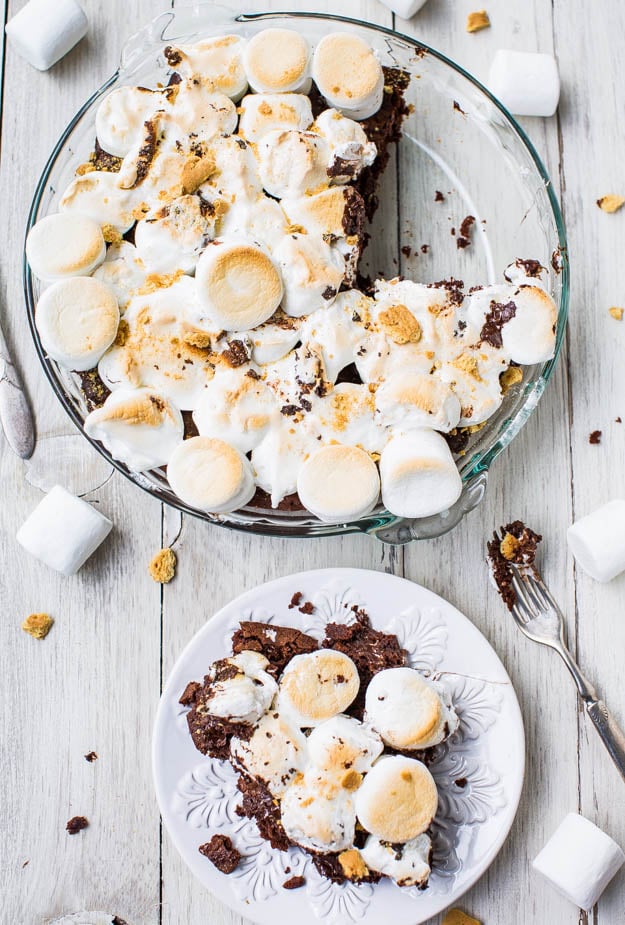 Can I Omit the Instant Espresso Granules?

The instant espresso doesn’t make the brownies taste like coffee, it just intensifies the chocolate flavor; omit if you’re concerned.

Can I Make a Graham Cracker Crust for the Pie?

Possibly. I’ve only made the recipe as written, but I don’t think using a graham cracker crust would alter the brownie bake time.

Can I Make a Classic Brownie Pie?

If you’re craving a regular chocolate brownie pie, omit the graham cracker crumbs and marshmallows from this recipe and just sprinkle chocolate chips on top instead. 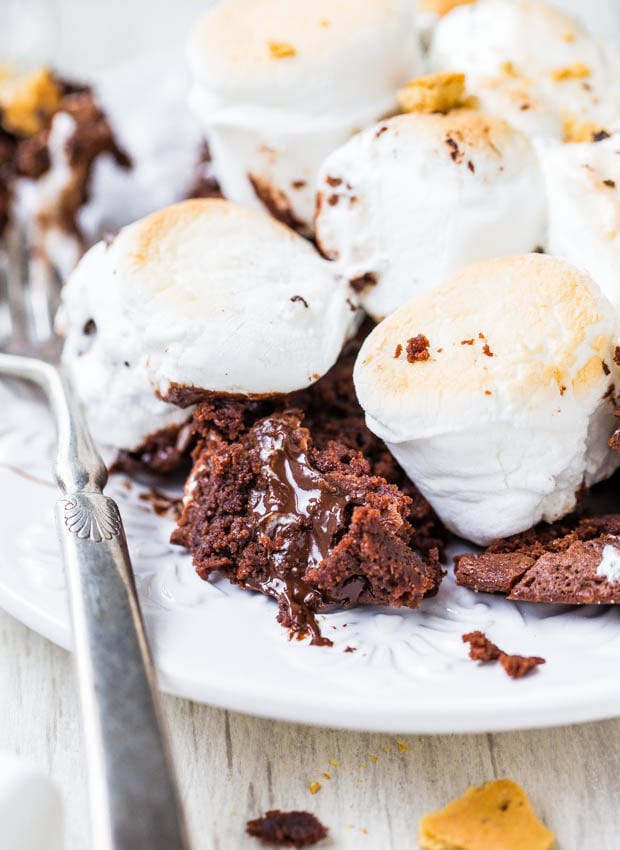 Keep an incredibly close eye on the marshmallows so they don’t burn, because broilers are extremely unforgiving. I’ve learned my lesson the hard way by charring too many marshmallows and don’t broil on the top racks.

I broil on the much safer middle rack, with the oven door open, and stare into the oven the entire time and jostle the pie dish around to aim the broiler on specific patches I want more or less toasted.

I used large marshmallows for this recipe, but mini will work as well. Just note that they broil more quickly. 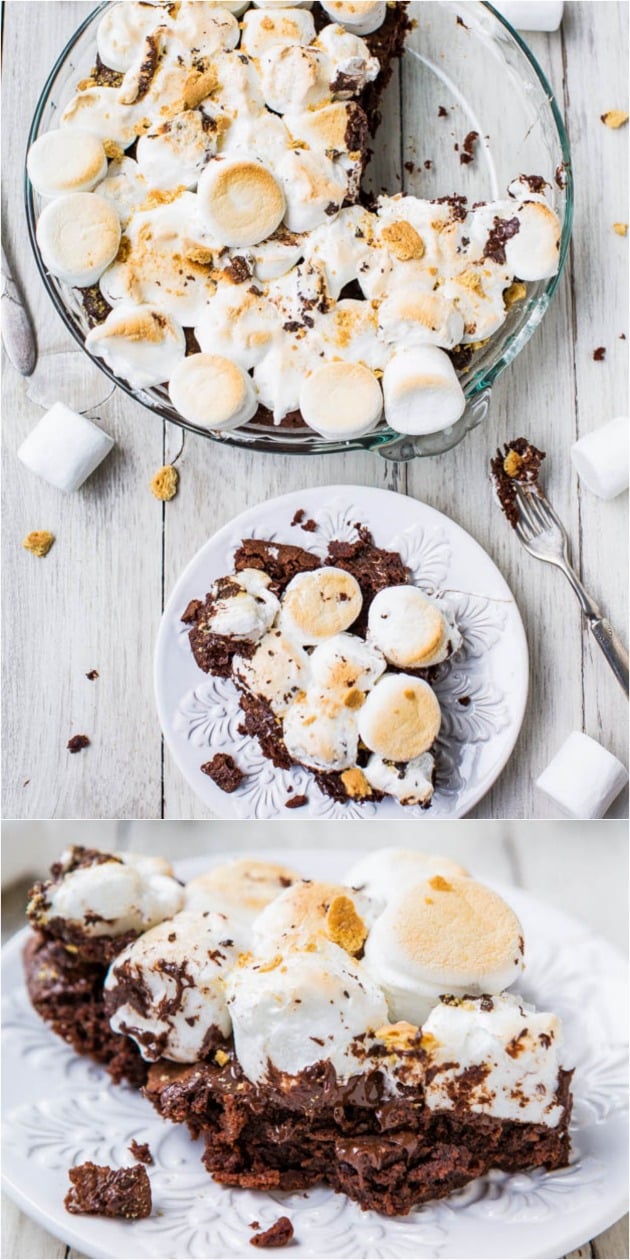 Storage: Pie will keep airtight at room temperature for up to 5 days.

ALL OF MY BROWNIE RECIPES!

Fudgy Brownie Balls – Made with brownies (use a box mix or your favorite homemade recipe), chocolate frosting, and dipped in melted chocolate! 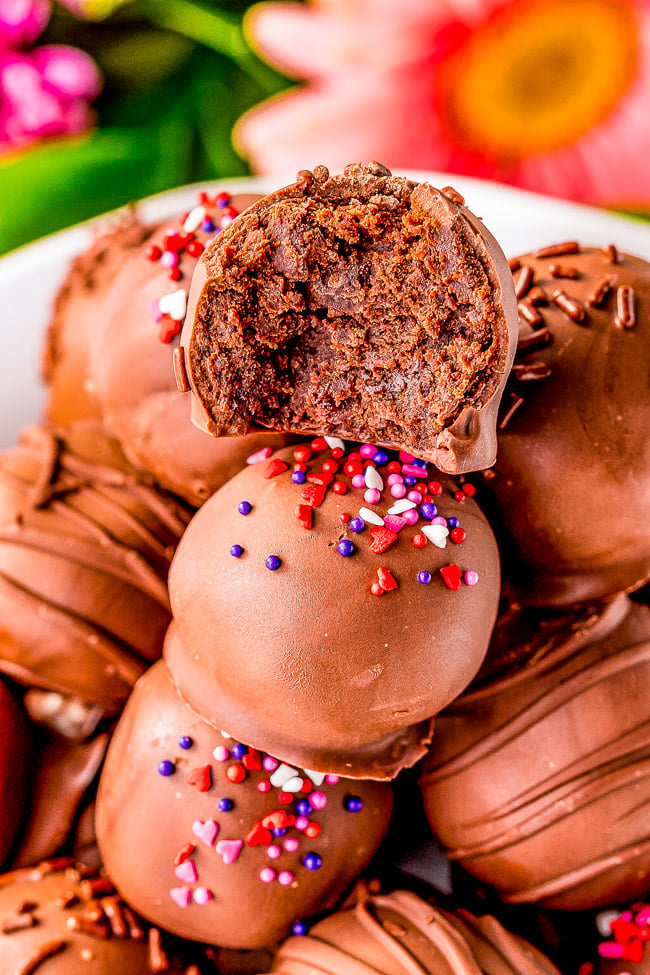 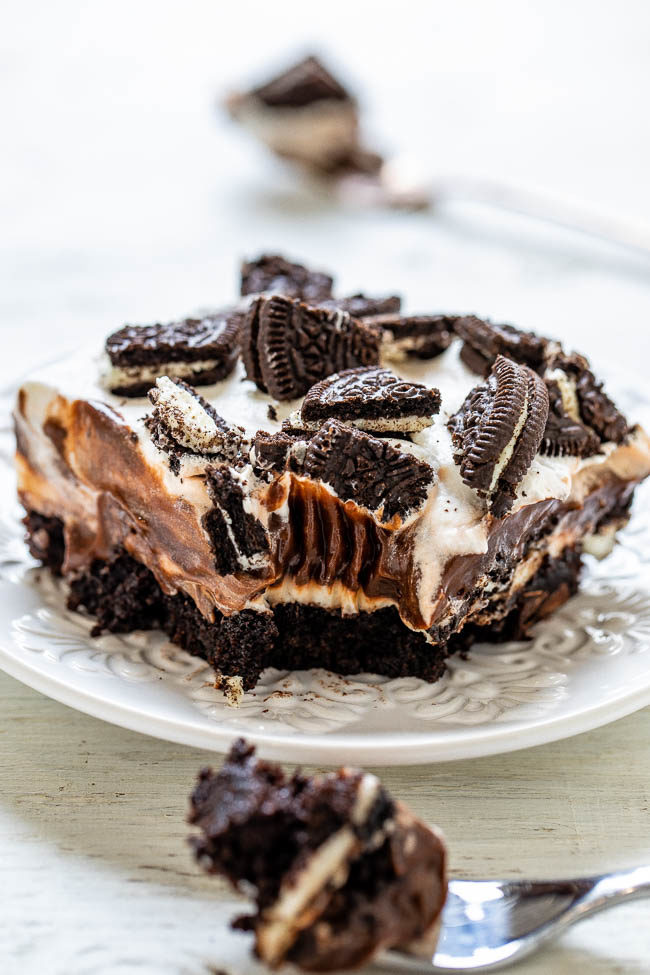 Peanut Butter Brookies — These brookies are soft and chewy, with peanut butter and chocolate married together in every bite. All you need is two bowls, and no mixer is required! 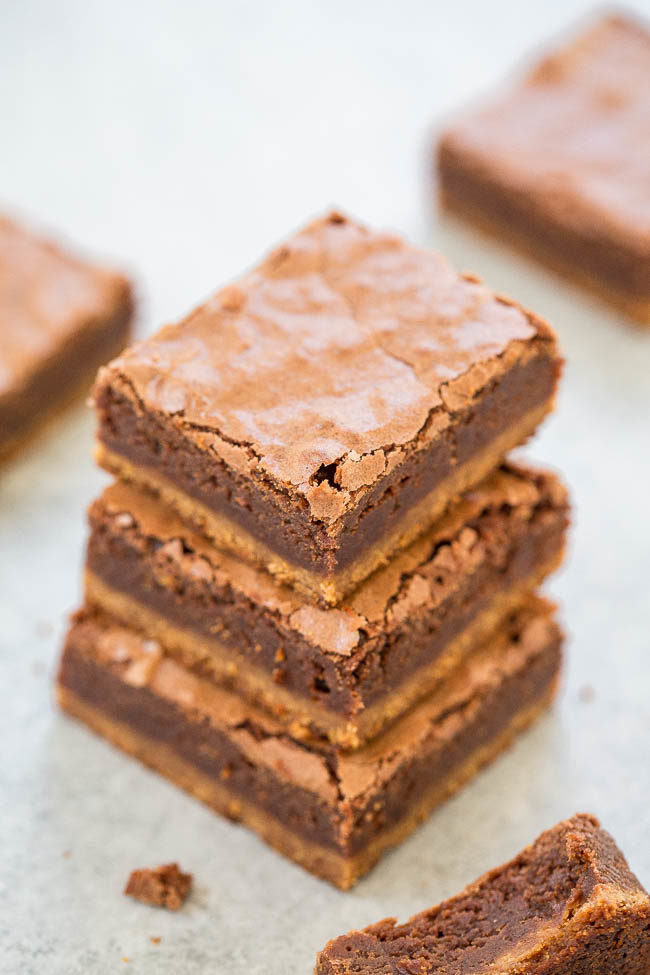 One-Minute Microwave Brownie — When chocolate cravings strike, make this EASY brownie recipe in one bowl, without a mixer, and it’s ready in ONE MINUTE!! 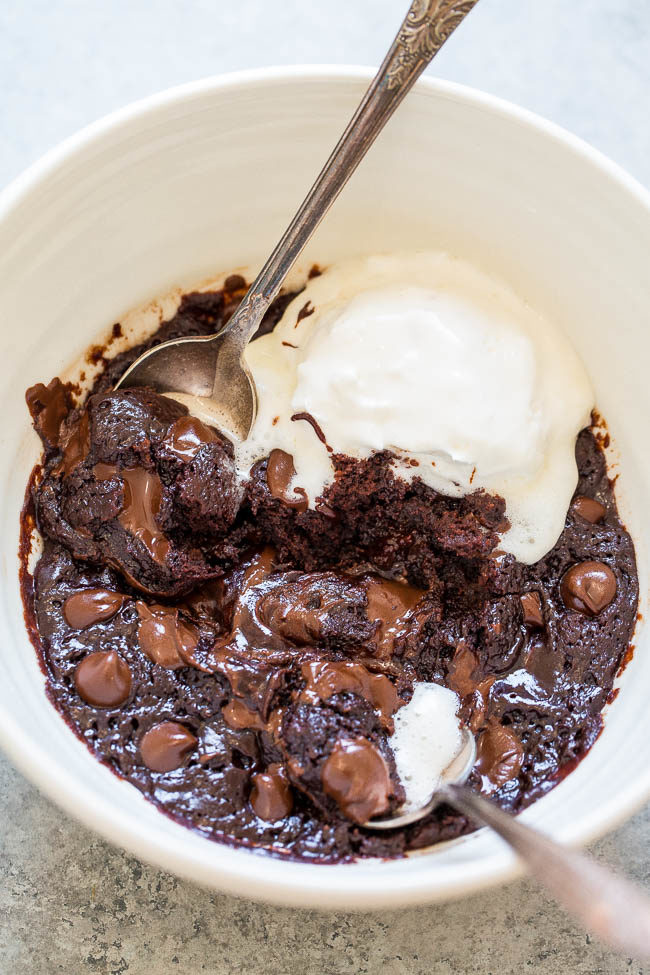 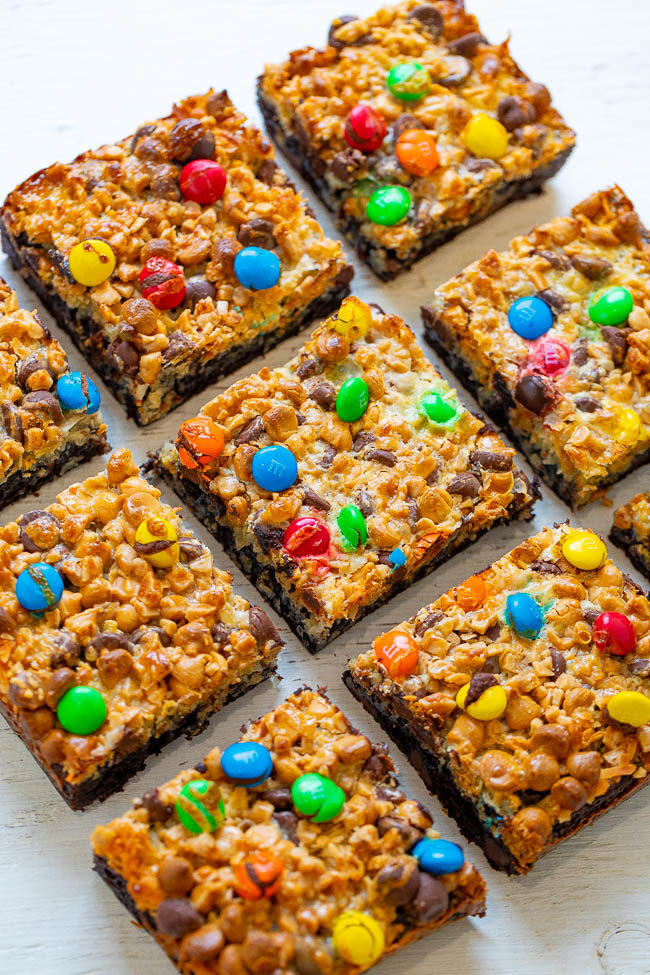 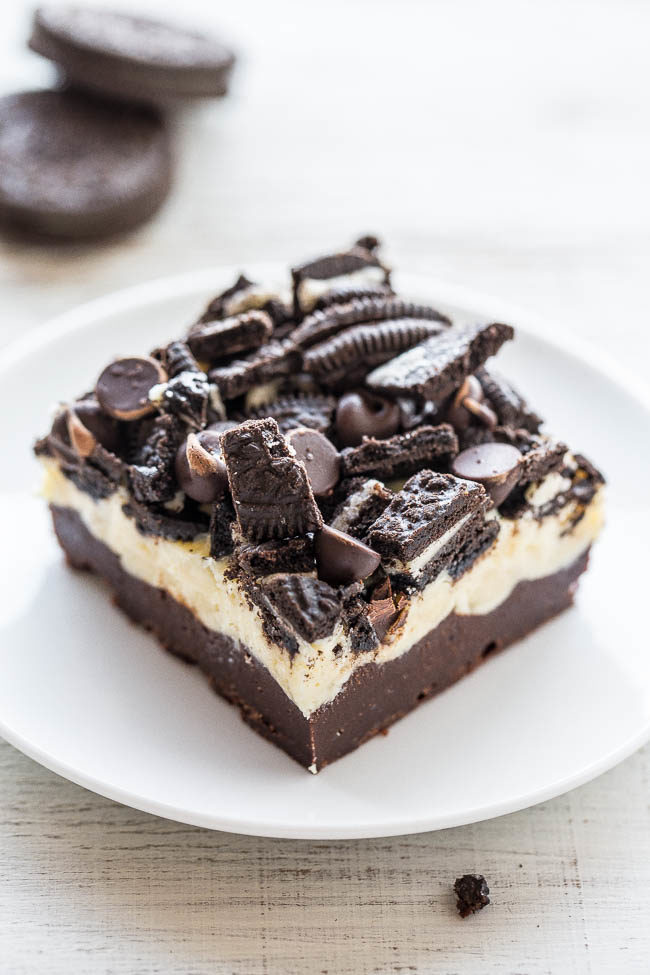 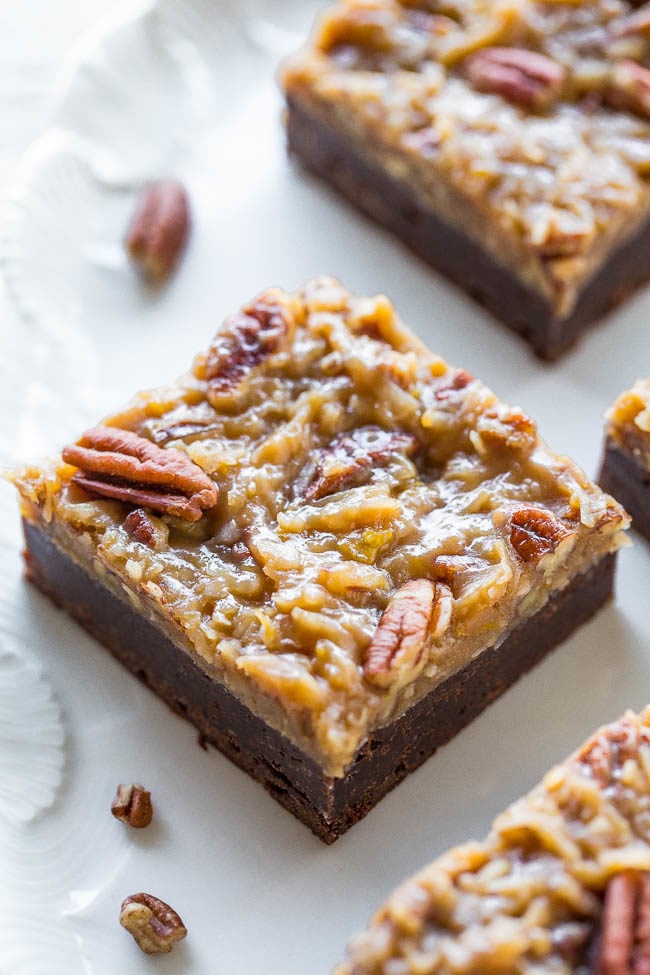