Loaded Magic Brownie Bars — The softest, fudgiest, and BEST 7 layer brownies topped with coconut chocolate chips, butterscotch chips, toffee bits, M&M’s, and more!! You will never want to cheat on these INCREDIBLE brownies after trying them!! 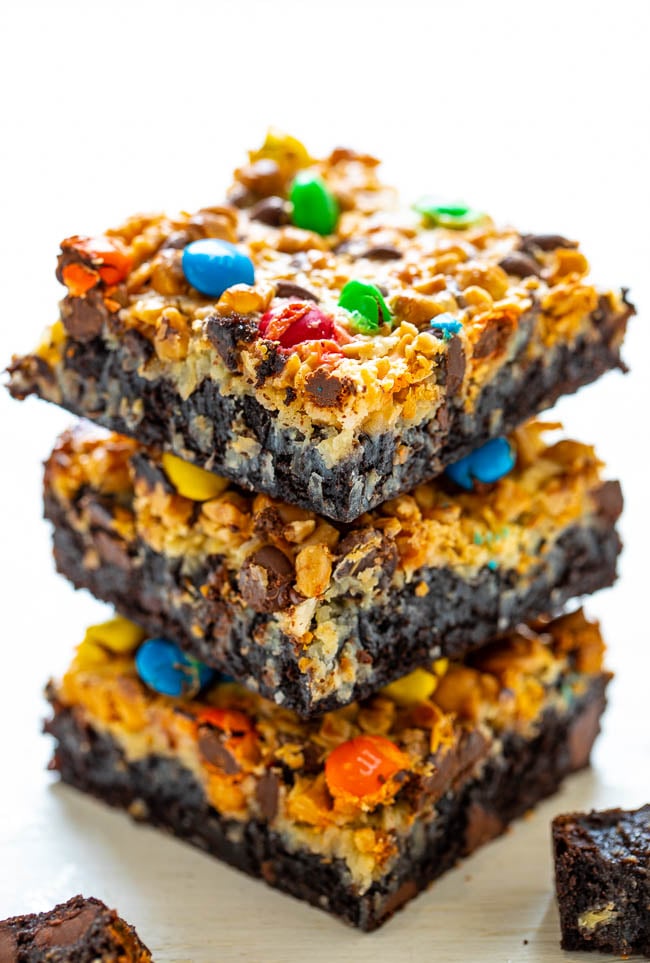 These are some seriously decadent brownies and are definitely in my top 5 brownie recipes of all time.

That is high praise, but they deserve it because of the incredibly soft and fudgy texture along with all the goodies piled on top.

They are incredibly rich, decadent, so fudgy in the interior, with slighly chewy edges, and they are the brownie equivalent of a quarter-pounder. One brownie felt like it could weigh a quarter pound in my hand but I’m not complaining.

They are just perfectly baked, which for me is a touch underbaked, so they are super moist and gooey. I would rather have nothing than a dry brownie and these are the opposite of dry.

Even though there is coconut, they aren’t overly coconutty which is good if you have people who aren’t the biggest fans of it.

The chocolate chips and butterscotch or peanut butter chips, along with the toffee bits, and sweetened condensed milk, all melt and congeal together to form a top layer that is both soft and gooey but retains a bit of perfect texture to sink your teeth into.

The M&Ms add extra chocolate oomph, texture, and a visual pop of color that lures everyone in.

I loved, loved, loved these brownies. I also love seven layer bars and this was a hybrid better than I imagined it could be. My daughter was legitimately sad when the pan was finished and kept talking about these for days after.

They remind me of the brownie-meets-seven-layer-bar equivalent of these Loaded M&M Oreo Cookie Bars, which were on the cover of Taste of Home magazine a few years back. 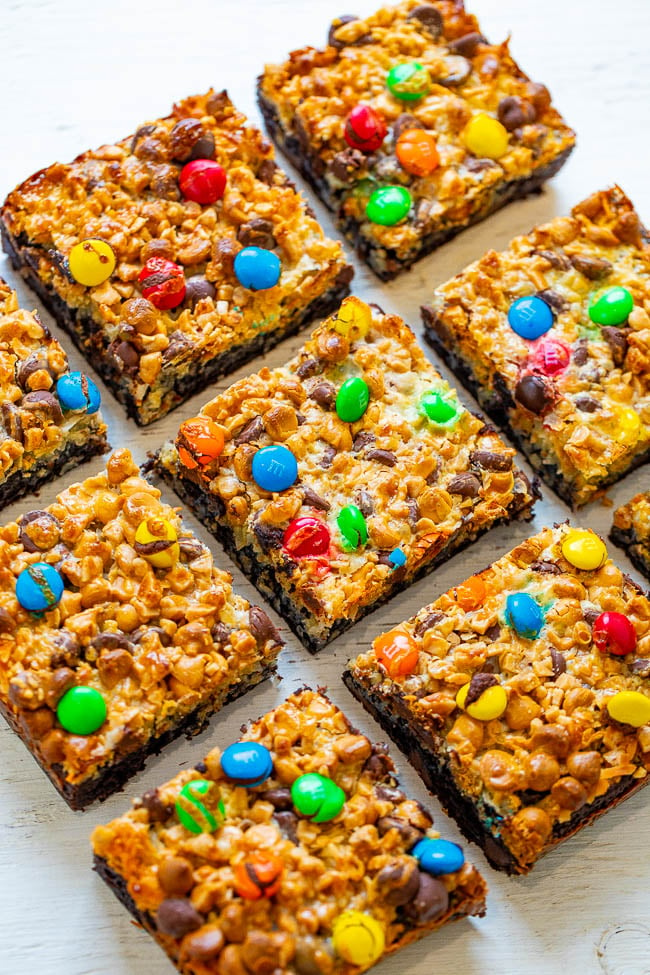 What’s in the Magic Brownie Bars?

Here are the components of this 7 layer dessert:

How to Make Magic Brownie Bars

The 7 layer brownies truly are a cinch to make! First, prepare the brownies according to the instructions on the box.

Since all brownie mixes vary in what they call for in mixing up the batter in terms of the number of eggs, and amount of water and oil, go by what your box of mix says, but bake it in a 9×9-inch pan until the brownies are about 90% done, whatever time that means on the clock.

Then, pile on the toppings and return the brownies to the oven for another 30 minutes. Add the M&M’s near the end so they don’t crack or bleed in to the topping. That’s it! 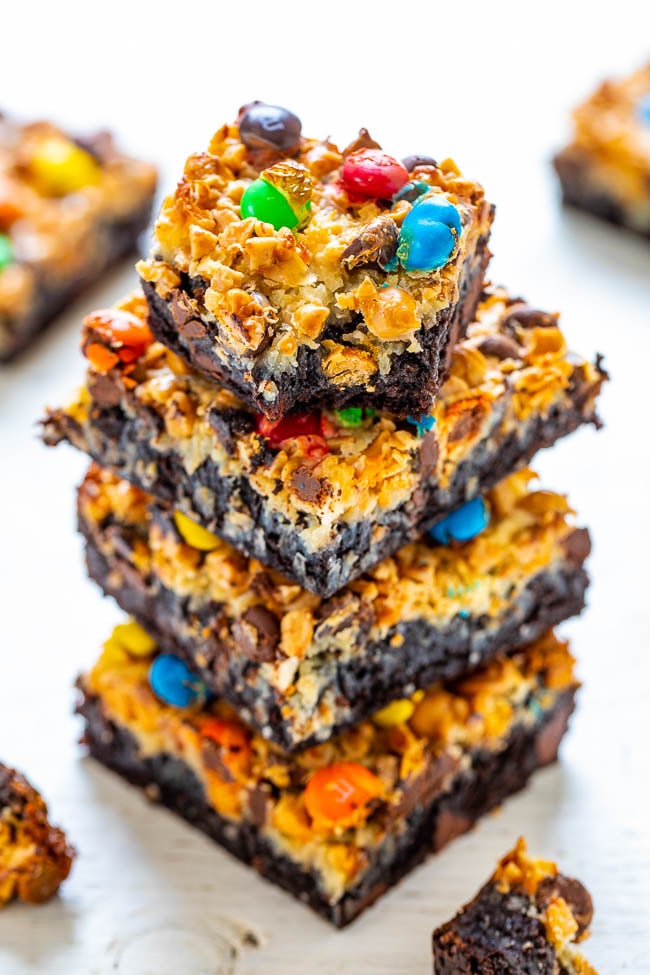 Can I Use Different Toppings?

The sky is the limit, so feel free to swap or exchange some of the add-ins to include white chocolate chips, pecans, walnuts, mini peanut butter cups, diced candy bars like Snickers or Milky Way, or whatever floats your brownie boat.

What Box Brownie Mix Should I Use?

For the first time ever, I used a box of Ghirardelli Dark Chocolate Premium Brownie Mix. I have to say I am an ultimate believer in it after this first use.

I recently read an article comparing about 15 brands of boxed mixes and this one was hands down the clear winner in blind taste tests and I can totally see why.

Can I Make the Brownies From Scratch?

Of course! If you want to make scratch brownies, I would use the brownie base from these Loaded Oreo Cream Cheese Brownies and bake it in a 9×9-inch pan.

The magic brownie bars are super easy, but it’s impossible to cover every possible baking combination, permutation, and situation with every possible mix out there.

So just remember to bake until they’re 90% done, add the toppings, and bake in a 325F oven for another 20 minutes or so before adding the M&M’s.

Read over the Notes below the recipe for other tips and reminders before you make these because I want these to turn out as perfectly for you as they did for me. You may never want another brownie recipe in your life after these.

As an Amazon Associate and member of other affiliate programs, I earn from qualifying purchases. 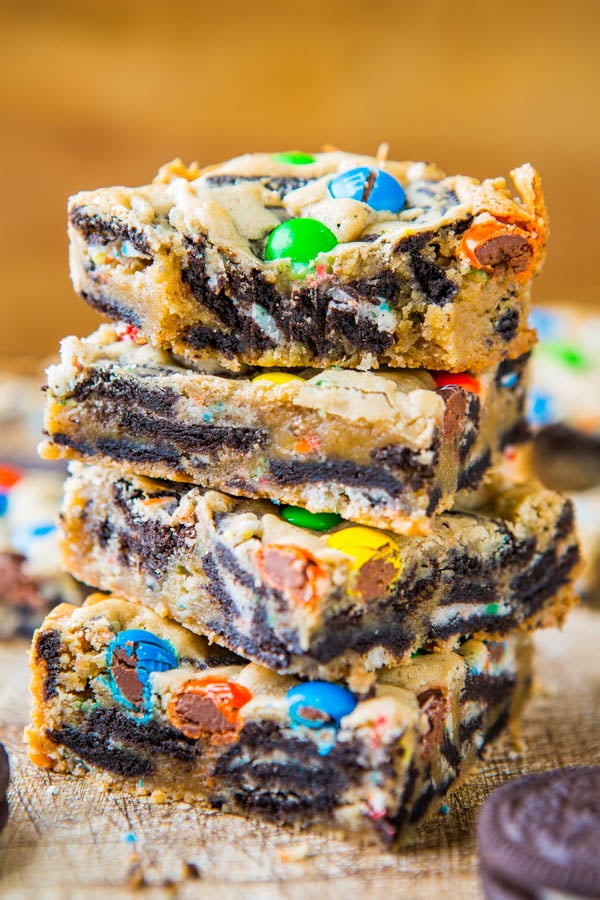