Piña Colada Smoothie — This creamy smoothies contains just four ingredients and is naturally vegan and gluten-free! I’ve also included instructions on how to turn it into a blended piña colada cocktail! 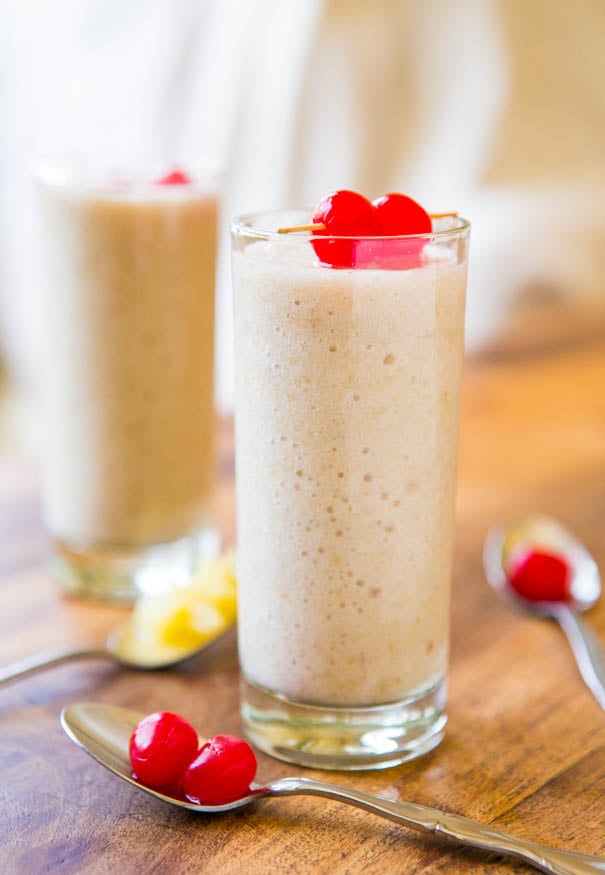 Oh how I love a piña colada for breakfast. This version doesn’t have alcohol in it, but you can fix that if you’d like. I was sorting through my photos and realized I made this smoothie when we were in Aruba in August and didn’t post the recipe.

It’s now or never, because all of a sudden I feel like I won’t be cool if I don’t have a steady stream of apple and pumpkin recipes coming daily. As much as I enjoy them, I don’t mind hanging onto summer a bit longer.

San Diego and most of Southern Cal gets our hottest weather of the year right now. It’s been in the high 80s to mid 90s every day for the last week. These piña colada smoothie go down very nicely! 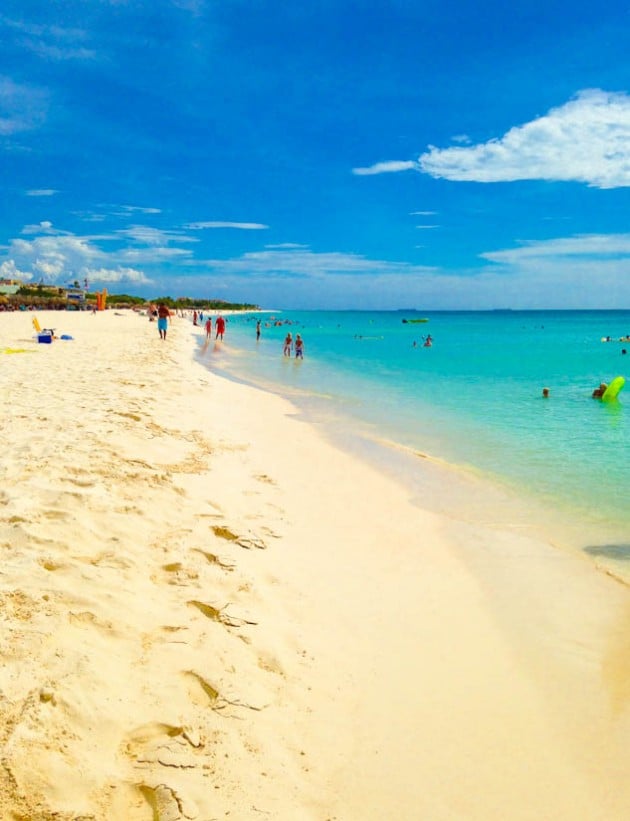 This pineapple banana smoothie is vegan, gluten-free, and won’t break your caloric piggy bank for the day. It clocks in at under 100 calories.

Pre-made piña colada mix is loaded with empty sugar calories. You may as well just eat frosting with a spoon (it’d probably be more fun that way, too). So I lightened it up, without sacrificing taste or flavor.

To add a pop of coconut flavor for pina colada authenticity without adding calories, I used coconut extract. It’s sold in the baking aisle near vanilla and other extracts. It’s usually much more reasonable than vanilla and only about $2 bucks for a 2-ounce bottle at my grocery store.

If you’re a coconut fan, it’s tasty in everything from buttercream frosting to maple syrup for a fun twist.

The bright pop of pineapple, the creaminess from the banana, along with coconut undertones make this healthy fruit smoothie so satisfying. And with a cherry on top, I can’t think of anything I’d rather be drinking right about now. I wish I was drinking it here.

It’s almost the weekend and I’ll take mine with a shot of rum. It’s after 5 o’clock somewhere. 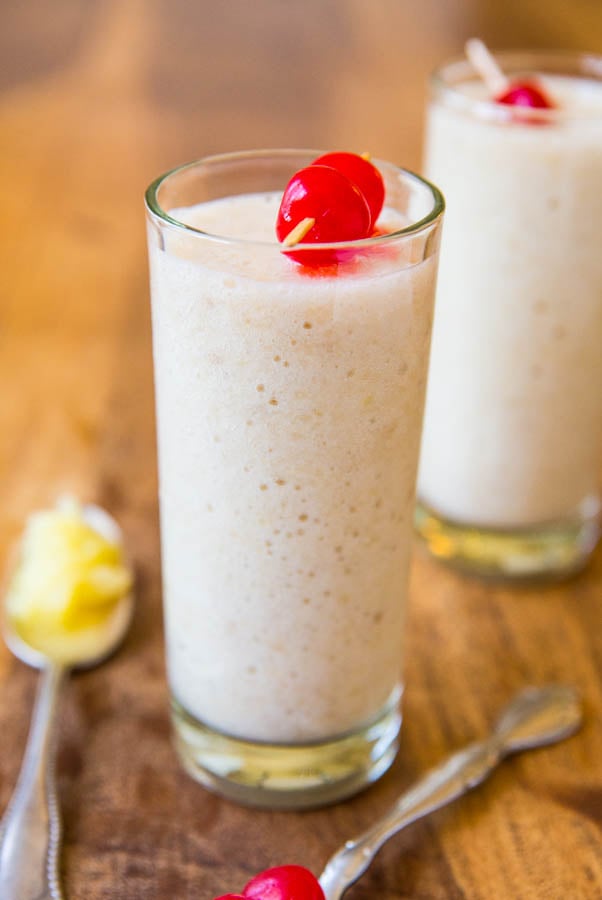 How to Make a Piña Colada Smoothie 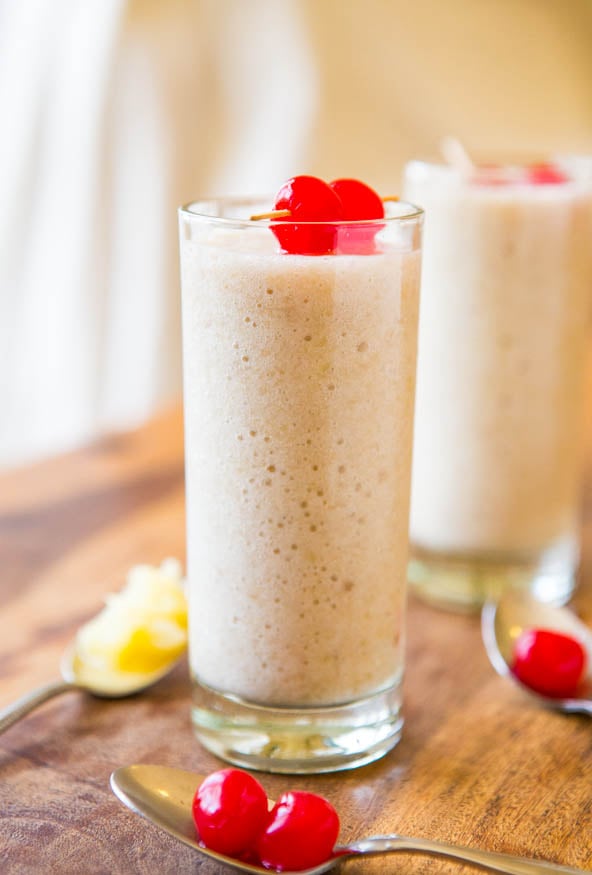 Can I Prep the Smoothie in Advance?

Yes! The leftover piña colada smoothie mixture can be frozen for up to two months.

You just want to make sure the glass is tightly covered with plastic wrap, or store the smoothie in a jar with a lid. You don’t want the freezer smells seeping into your smoothie!

Can I Add Rum to my Smoothie?

Yes! I made this as a non-alcoholic piña colada smoothie, but you can add a splash of Malibu rum to yours if you’re enjoying it as a poolside beverage. 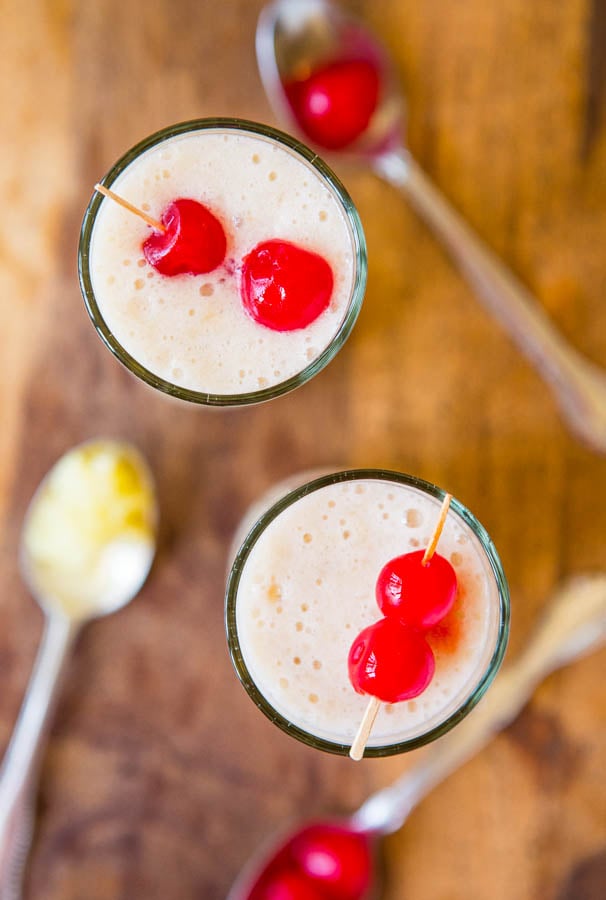 Can the Coconut Extract Be Omitted?

I know someone will write saying they don’t like coconut. You really can’t have a piña colada without coconut, and if you like piña coladas, this smoothie will be right up your alley.

The coconut flavor isn’t overly intense, promise. However, omit the coconut extract if you wish.

If you simply don’t have coconut extract, then add the optional shredded coconut instead. So long as you add coconut flaovr in some way, you’re good to go! 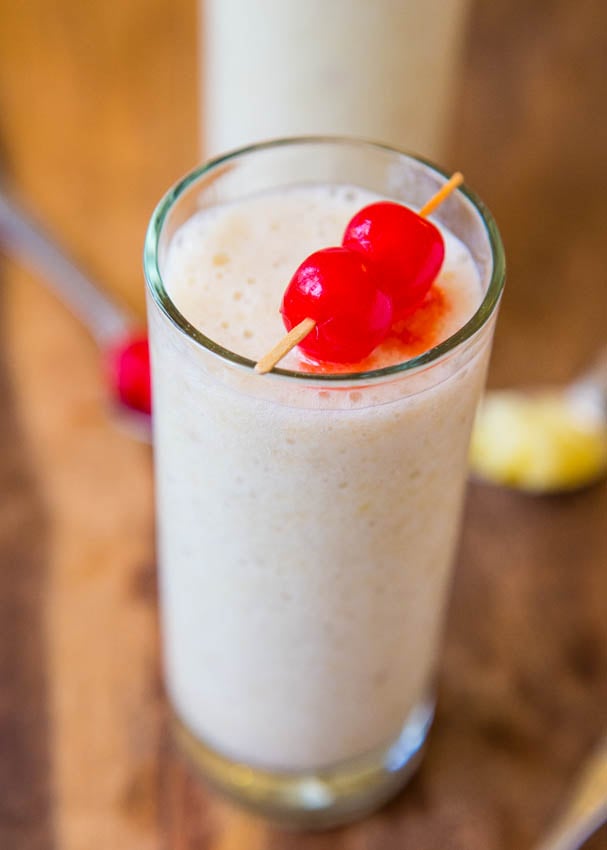 I used unsweetened vanilla almond milk in this easy smoothie recipe, which only has about 30 calories per 8 ounces. It’s nearly insignificant.

If you want to bump up the coconut flavor and don’t care about stats, use coconut milk or a splash of cream of coconut, like Coco Lopez. So good, rich, and creamy.

If you want a thicker smoothie, I suggest freezing the fruit beforehand and adding slightly less almond milk than this recipe calls for. You could even make almond milk ice cubes and throw those into the smoothie to make it extra thick.

And, of course, for a thinner piña colada smoothie just add in more almond milk.

*Or one 8-ounce can crushed pineapple, in juice

Frozen Fruit and Yogurt Smoothie — Smoothie recipes with frozen fruit are the best because they don’t need any ice to reach the perfect consistency! 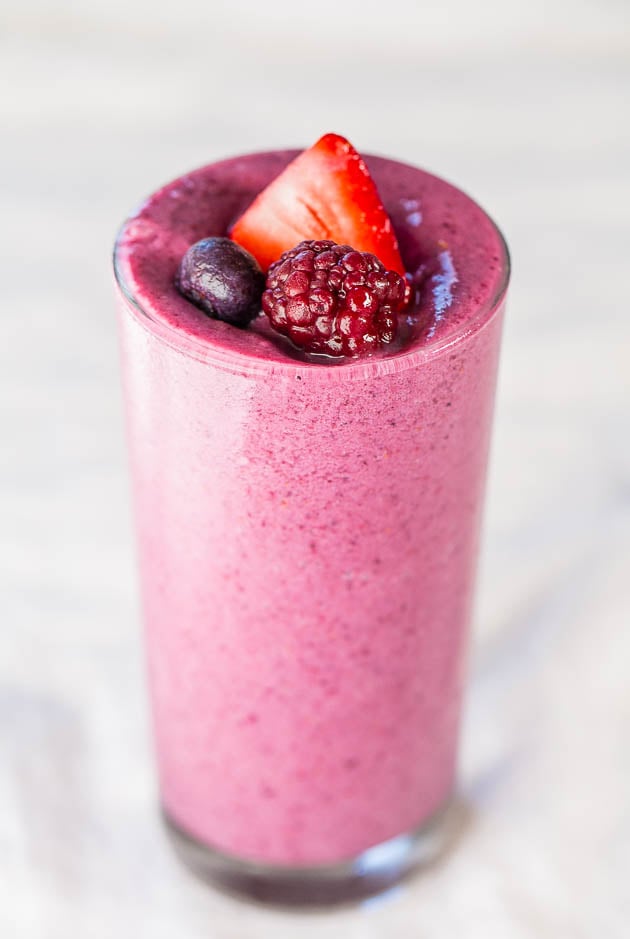 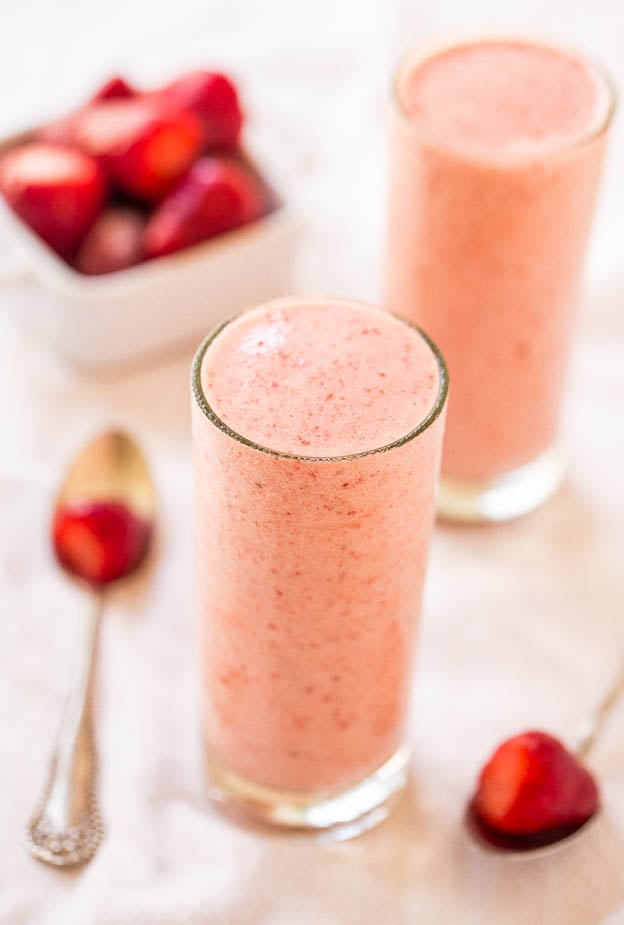 Strawberry Pineapple Lava Flow Smoothie — This two-layer smoothie is packed with fresh fruit and is such a treat first thing in the morning. 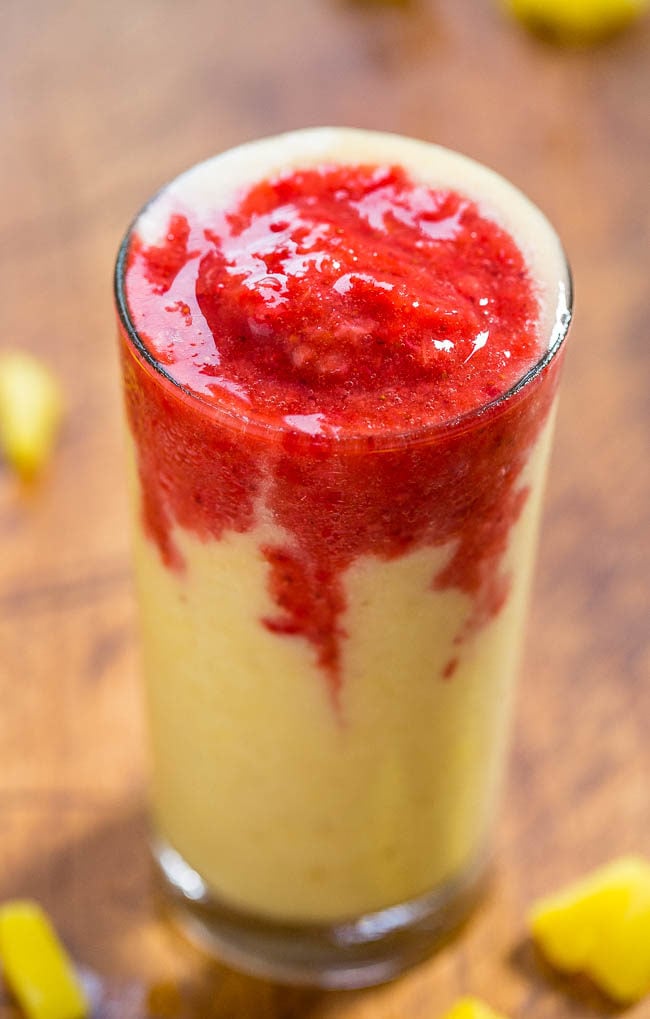 Make-Ahead Smoothie Freezer Packs — Prep your breakfasts and snacks for the week with these easy and DELISH freezer pack smoothie recipes! 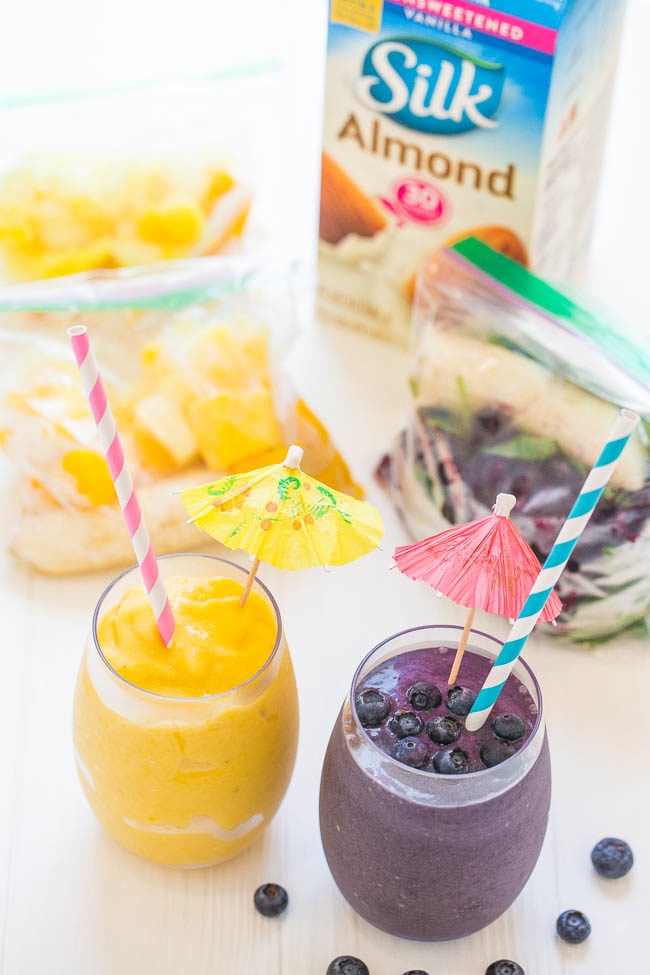 PB&J Smoothie — The perfect PB & J flavor in smoothie form! The smoothie gets its jelly flavor from berries rather than actual jelly. 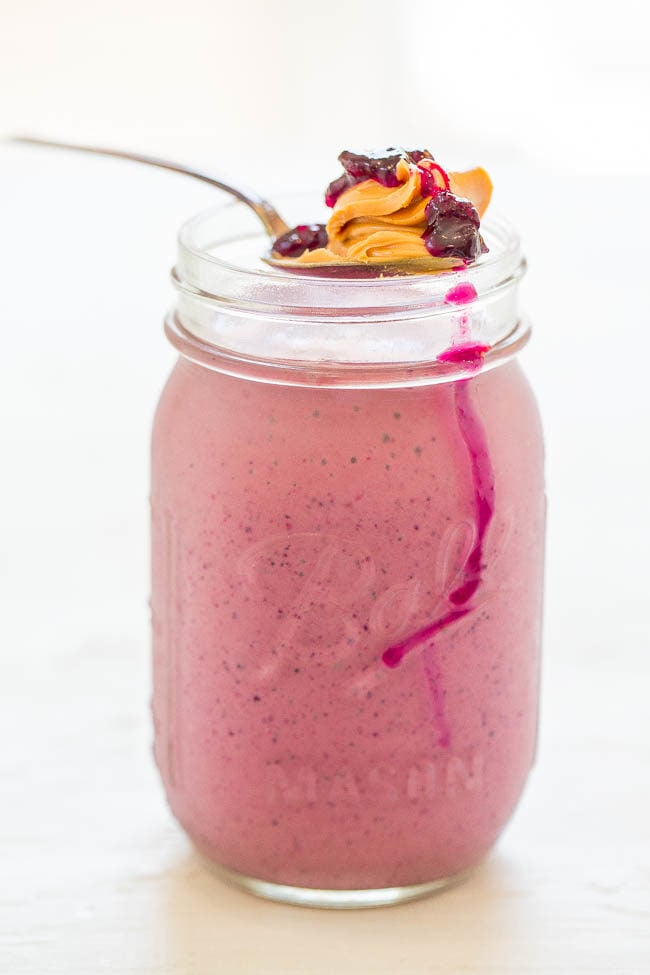 Chocolate Peanut Butter Smoothie— You’d never guess this fudgy peanut butter smoothie is actually healthy for you! Warning: you’ll need a spoon for this smoothie that tastes like drinkable fudge! 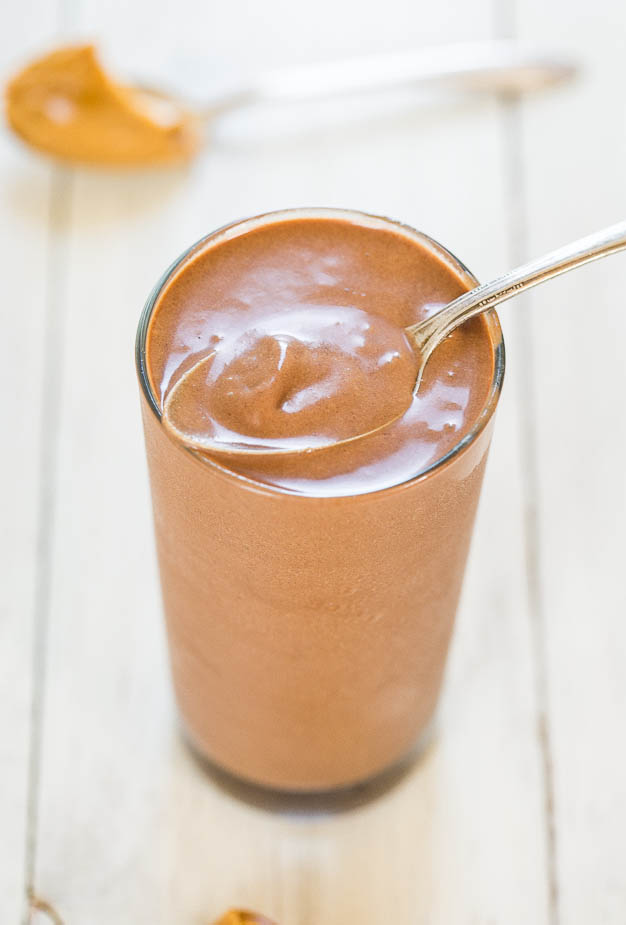 Tropical Green Smoothie— I promise this healthy green smoothie doesn’t taste healthy at all! It tastes like a virgin piña colada that just happens to be bright green and good for you. 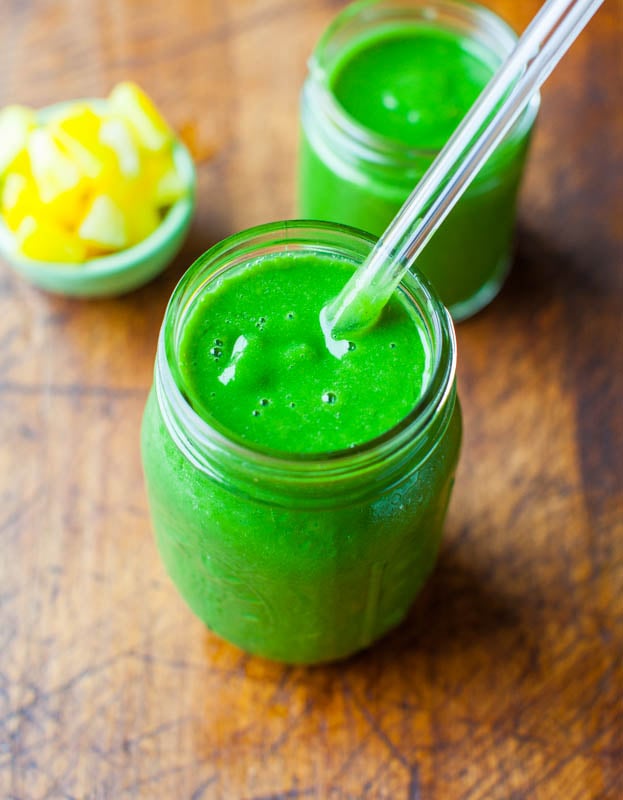