Honey Baked Ham — Spiral baked honey ham that’s SO EASY you really can’t mess it up! The sweetness from the honey works perfectly with the saltiness of the ham. This ham is similar to the honey baked ham everyone loves to purchase but so much less expensive! Perfect for HOLIDAY MEALS and family dinners! 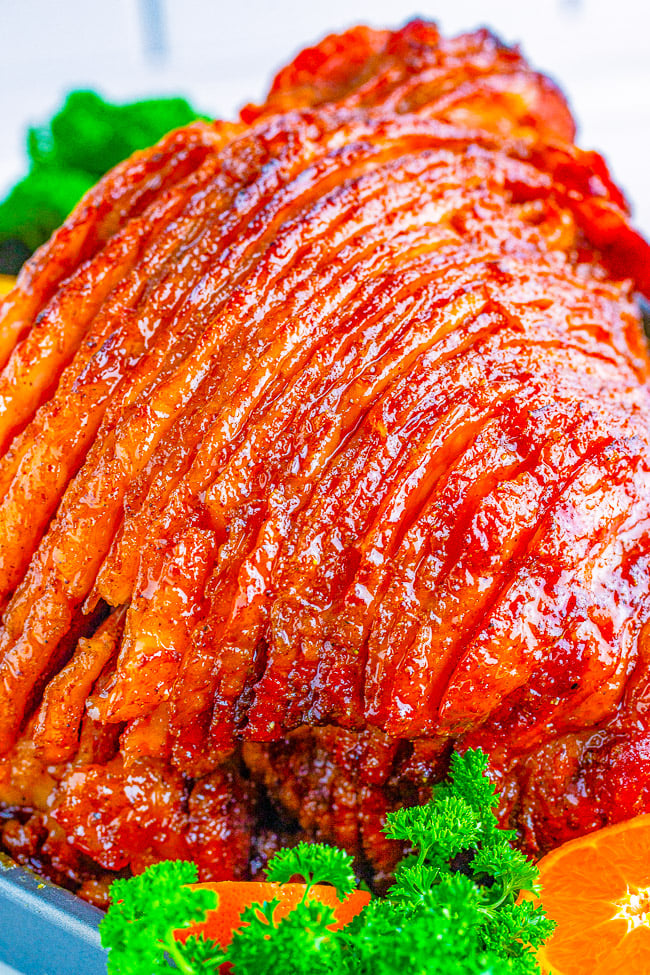 If you’ve ever been intimidated to make a honey baked spiral ham worthy of your family’s holiday celebrations such as Easter, Thanksgiving, Christmas, New Year’s, this super easy recipe will give you the confidence to make one.

Or, try this honey baked ham the next time you’re looking for something for a Sunday dinner or satisfying family meal.

Everyone will be impressed with the flavor of this spiral baked ham that’s perfectly sweet to balance the saltiness of the ham.

It reminds me of those fancy-looking honey baked hams that everyone loves to buy, but this version is far less expensive, and tastes just as good — if not better — than anything you’d order online, order from your grocery store, or order in a restaurant! 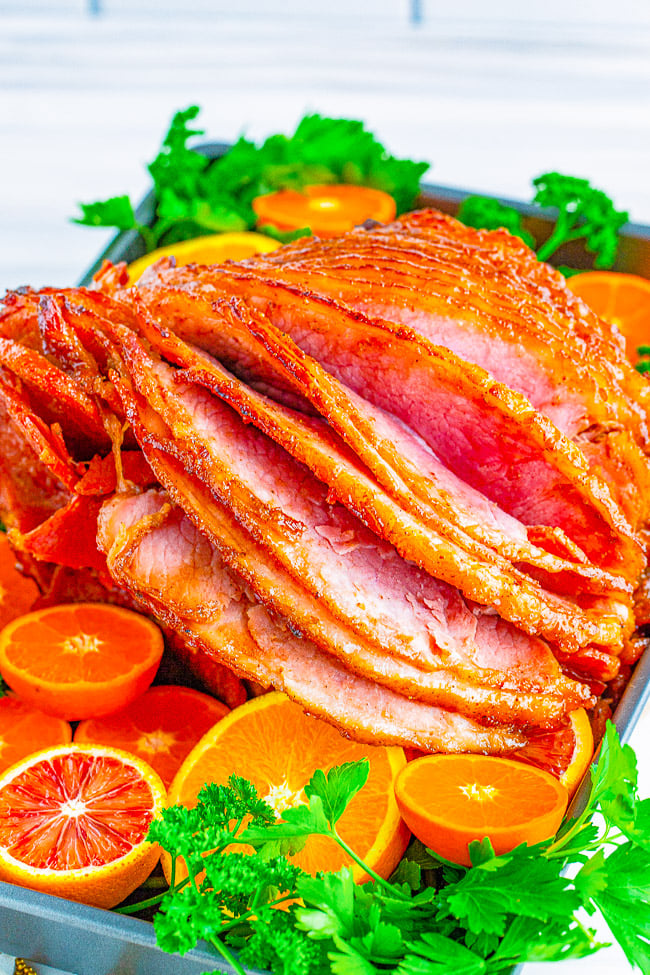 The star of this recipe is undoubtedly the honey baked ham glaze. I kept the ingredients list short and simple, because I really wanted the actual flavor of the meat to shine through. 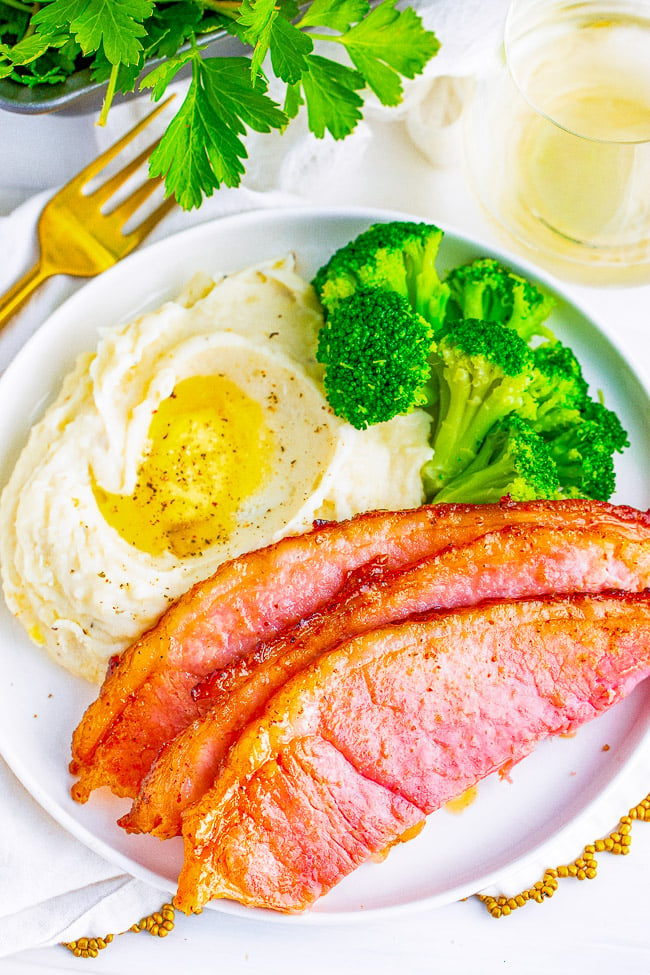 How to Cook a Honey Baked Ham

Preheat the oven to 325F and place the ham onto a rack in a large roasting pan, cut-side down, and then pour the apple juice and water into the bottom of the roasting pan.

In a small sauce pot add the honey, brown sugar, vinegar, dijon and grainy mustards, garlic and onion powders, black pepper, ground cloves, and whisk together until combined and place over medium-low heat.

Continue to stir occasionally until the sugars have melted and the mixture is smooth. 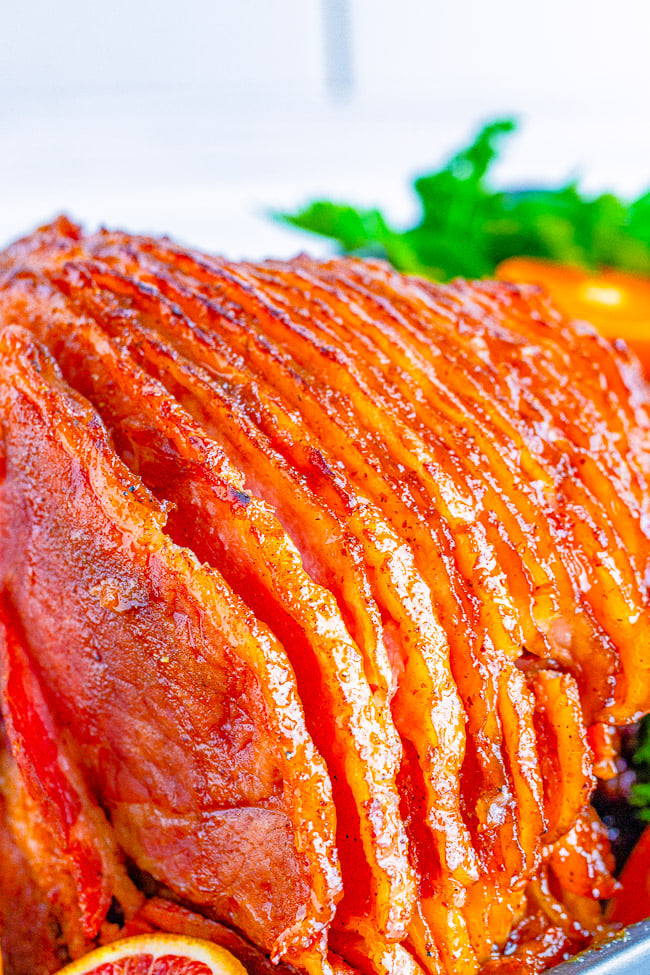 Cover with foil and bake for about 90 minutes, or until the internal temp is 110F.

Increase the oven temp by 50 degrees, to 375F. Remove the ham from the oven, remove the foil, and brush with half of the remaining glaze. Again, try to get the glaze between the slices as best you can.

Place the ham back in the oven uncovered and bake for another 20 minutes or until an internal temperature reaches about 130F.

Turn your broiler to low, brush the remaining glaze all over the ham, trying to get the glaze in between the slices, before broiling the ham until the glaze starts to bubble and becomes caramelized. Keep an eye on it so it doesn’t burn.

Let the ham sit for about 20 minutes before serving your masterpiece! 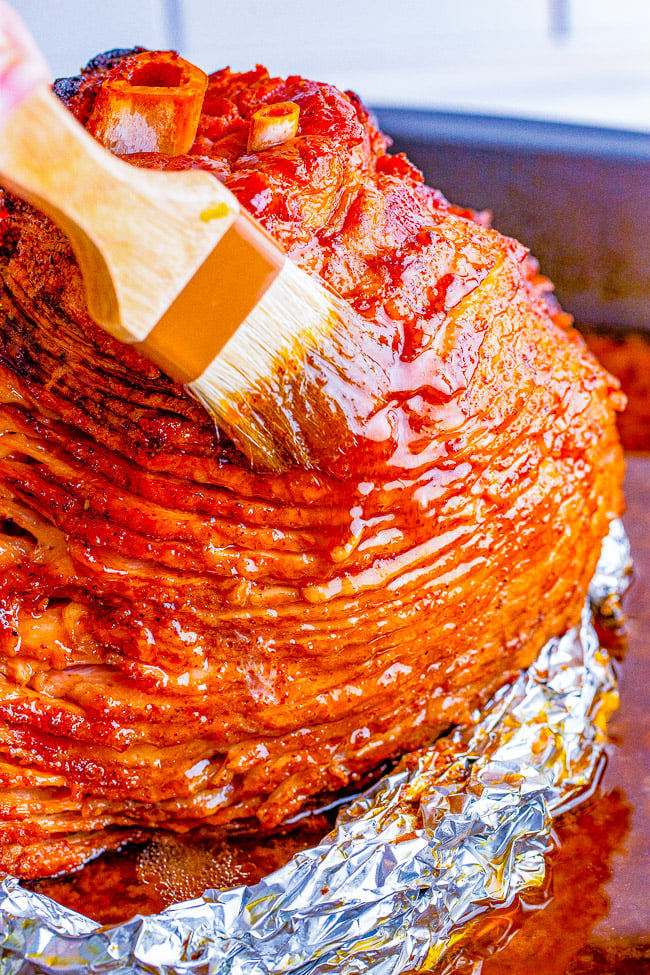 The glaze on the outside doesn’t really get crispy but I highly recommend broiling it for a few minutes to get that caramelized flavor.

With the natural sugars in the honey, make sure to keep an eye on it the entire time you’re broiling or it could burn.

How Sweet Is a Honey Baked Ham?

Although the overall flavor profile is quite sweet from the honey, apple juice, and brown sugar, but it all really works beautifully and balances the inherent saltiness of the ham.

Ironically, you don’t really specifically taste honey even though there’s lots of honey in the glaze. It just really adds the perfect sweetness. 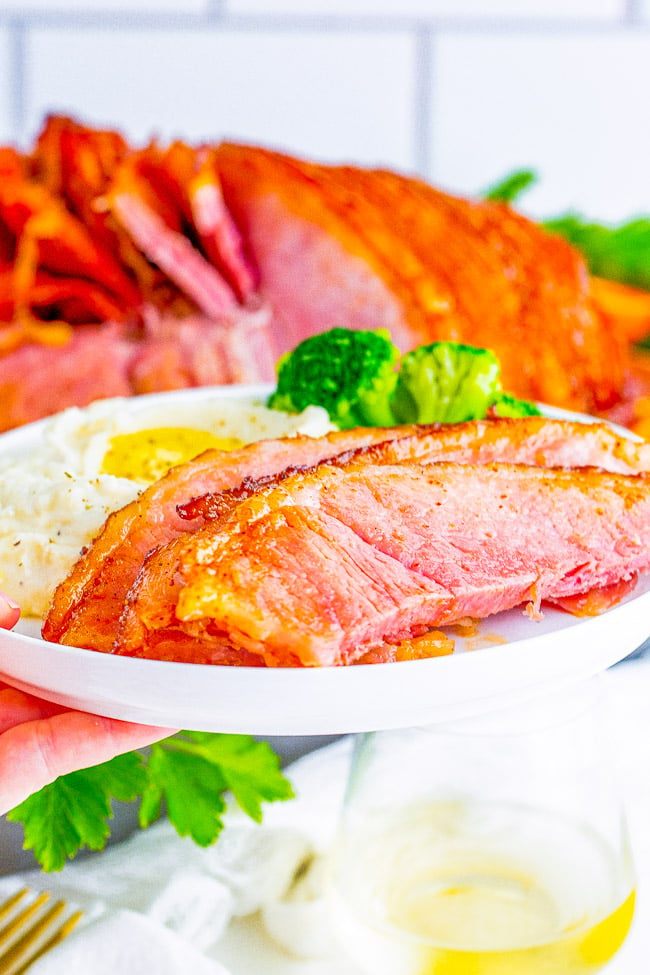 How Long to Bake Ham in the Oven

In total, this spiral baked ham will need to cook for about 1 hour 50 minutes total. It’ll first bake for 90 minutes at 325F, then an additional 20 minutes at 375F.

How Long Does a Honey Baked Ham Last?

Leftover spiral baked ham will last up to five days in the fridge. Store the meat in an airtight container for best results. 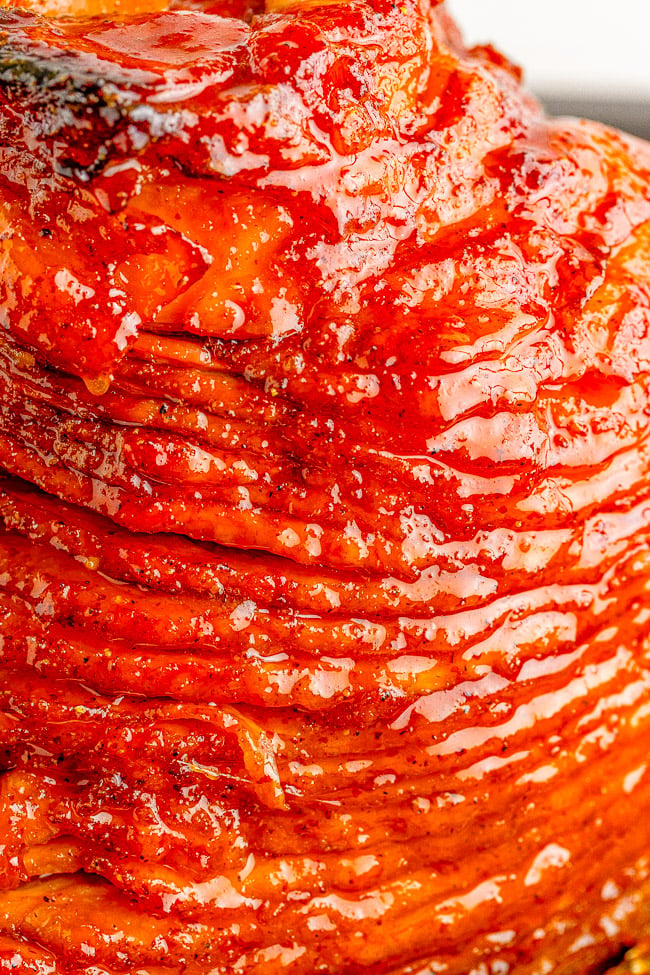 Can Ham Be Frozen?

Yes! This recipe makes a 7 to 10 pound ham, so you’ll likely wind up with leftovers. Do NOT throw them away!

Leftover ham can be frozen for up to three months in freezer bags. I recommend storing smaller portions of ham in one bag so that you can thaw a couple servings at a time.

When ready to eat the frozen ham, simply thaw it overnight in the fridge.

What to Do with Leftover Ham

Leftover ham is great to have on hand for soups, chowders, sliders, and more. Use the leftover meat to make Ham and Cheese Sliders (a long-time reader favorite!), a Baked Ham and Cheese Omelet, or serve it on a charcuterie board. 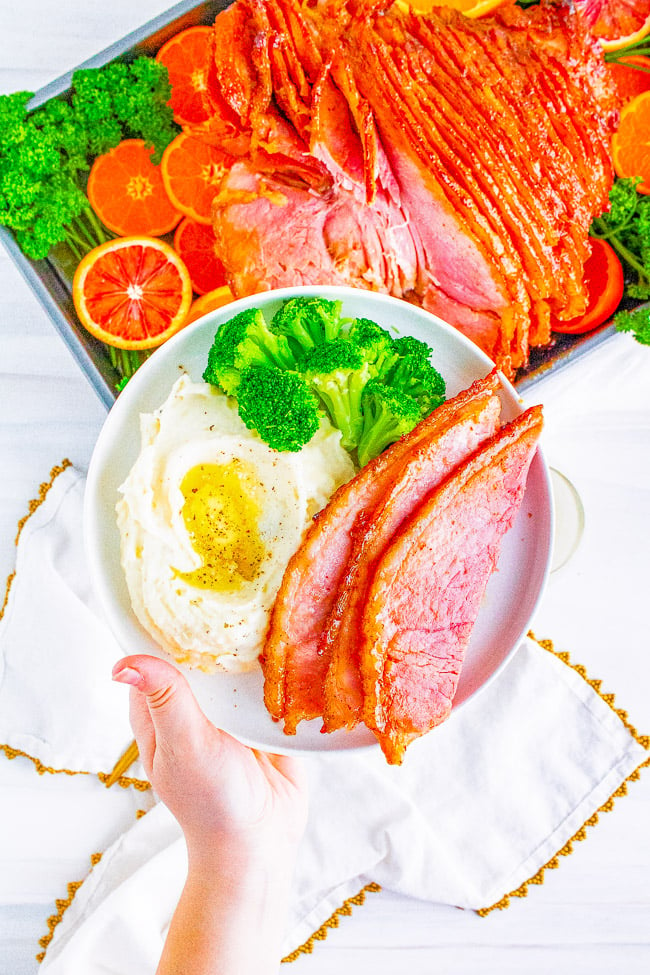 What to Serve with Baked Spiral Ham

I personally love dipping the ham slices in the drippings as a jus when serving. They keep the ham super moist and add extra flavor, too!

As far as side dishes to serve with honey baked spiral ham, you have quite a few options:

Whether you’re making this honey baked ham recipe for Easter, Thanksgiving, Christmas, or another holiday, there are plenty of sides to choose from. 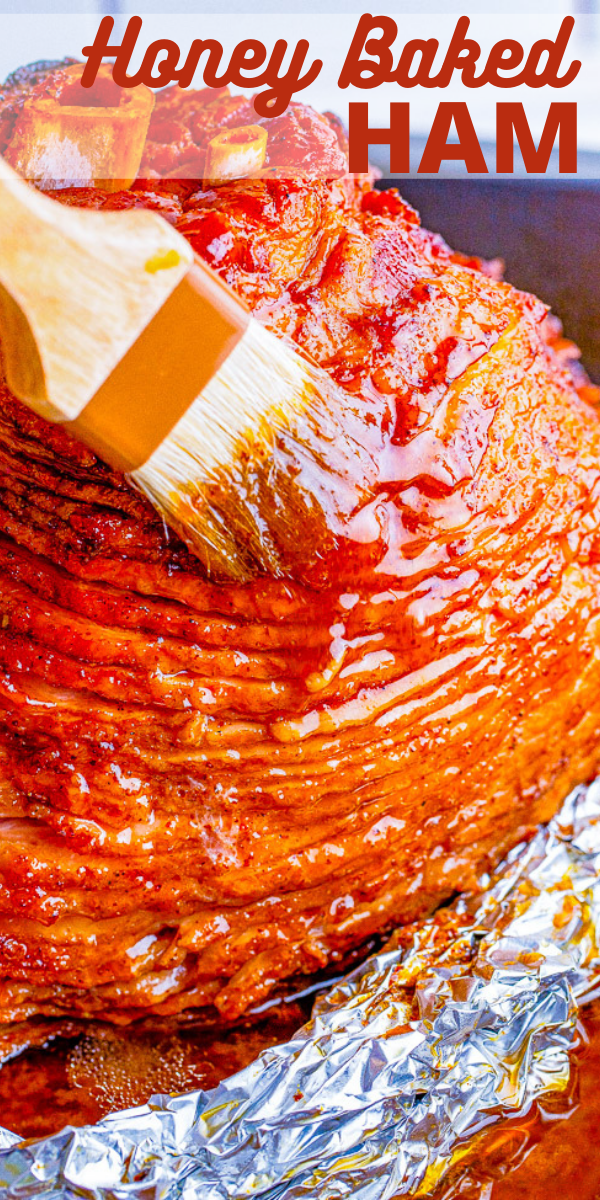 Tips for the Best Baked Ham

Allow your ham to sit out at room temp for 3 hours before baking it. It will help bring up the ham’s temperature so it won’t take as long to cook.

I prefer to cut the slices off the main ham shank and place them directly into the pan with the liquid. Bring it to a simmer and it’s ready to re-serve! 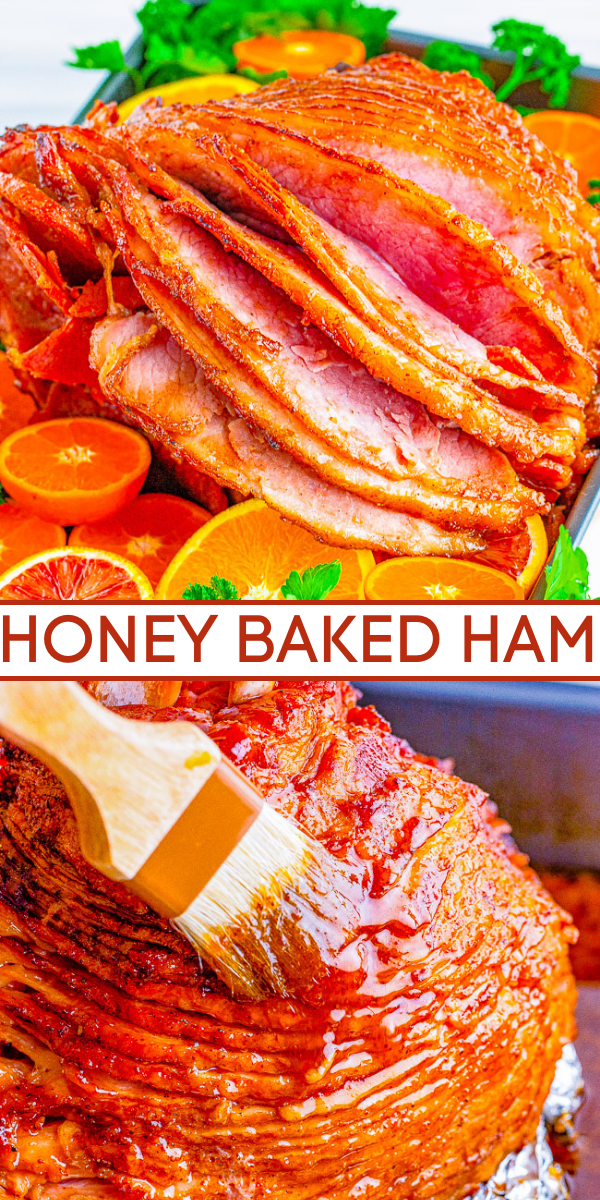 Storage: Ham will keep airtight the fridge for up to 5 days or in the freezer for up to 3 months.

Foolproof Oven Roasted Turkey — Learn how to make juicy, flavorful herb-roasted turkey that’s not dry! This turkey has all the flavor that grandma’s used to have, minus the hassle. No brining, no basting, and no stress! 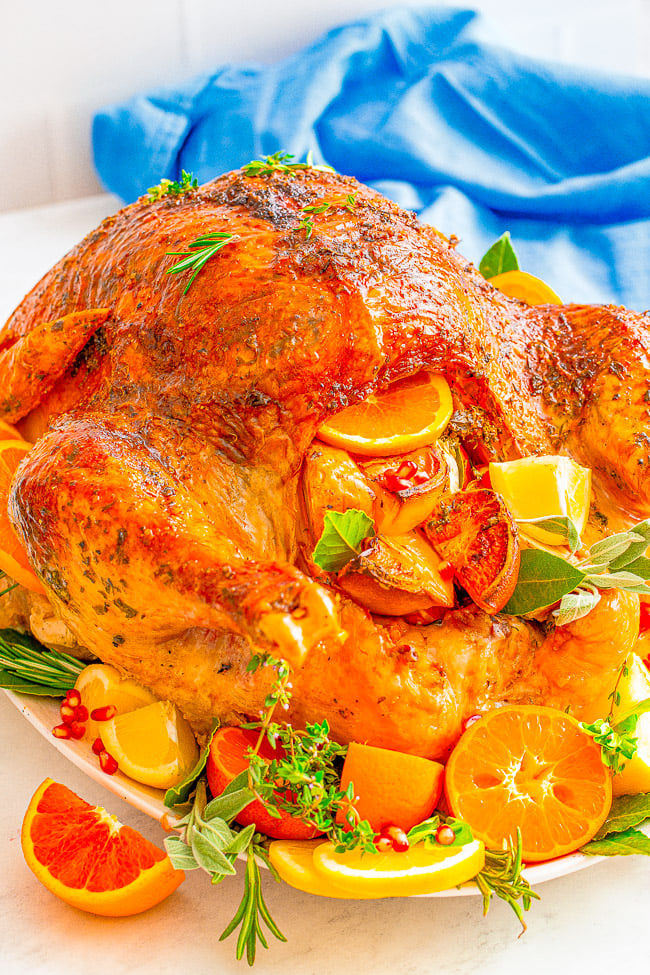 Easy Homemade Gravy — An EASY, foolproof recipe with lots of TIPS for PERFECT gravy that’s ready in 5 minutes!! The whole family will LOVE this gravy over their Thanksgiving turkey, mashed potatoes, or as a comfort food addition to your dinner table during other times of the year!! 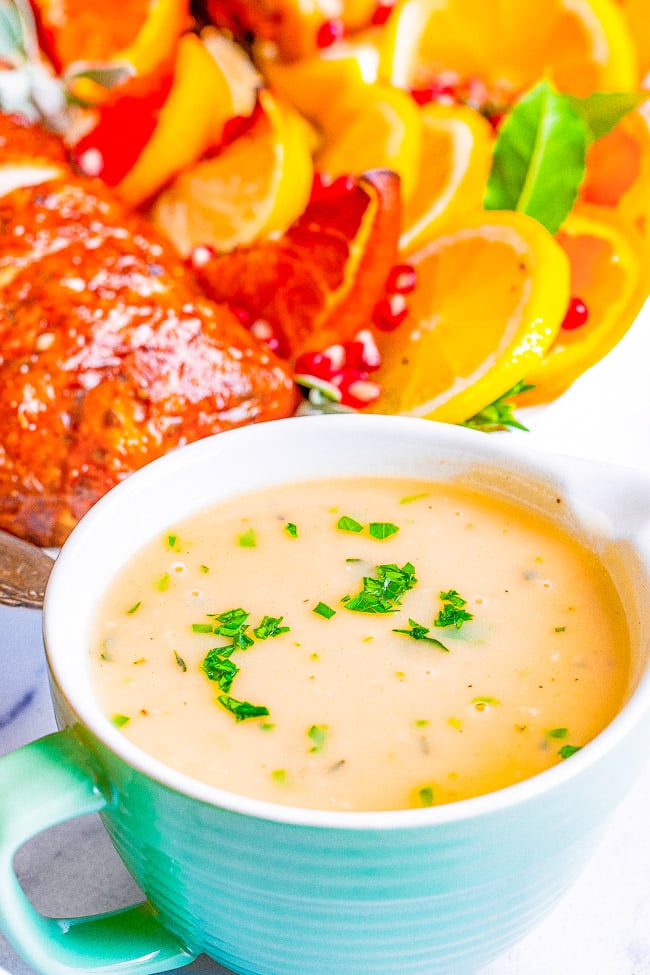 Slow Cooker Sausage Stuffing – Easy stuffing that’s full of flavor from the sausage, onions, and more! You don’t even need to brown the sausage first and everything cooks together! A time and oven-space saver on holidays! 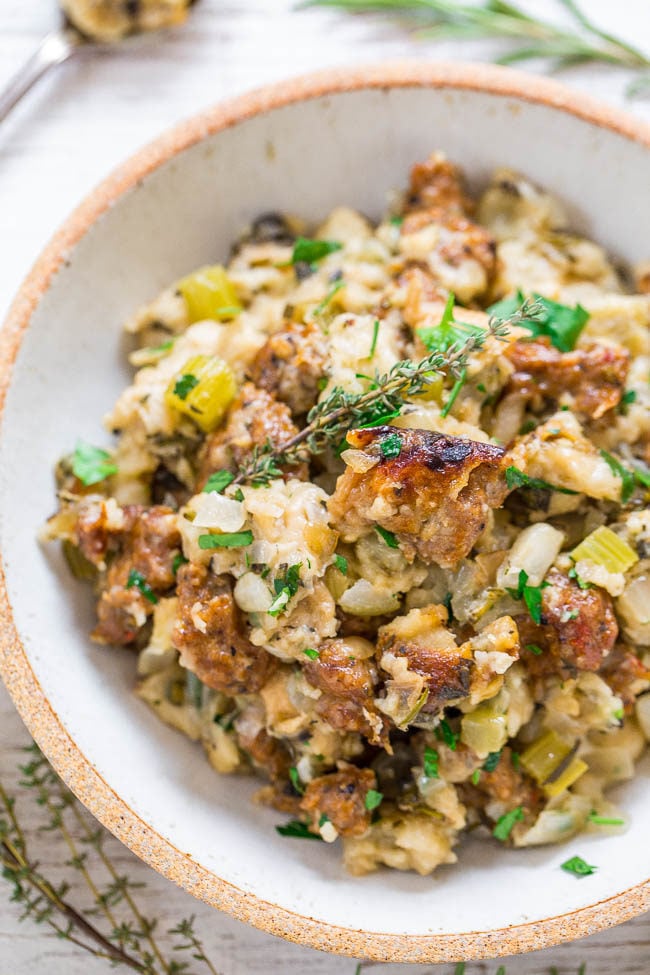 Sweet Potato Casserole with Butter Pecan Crumble Topping – The holiday classic just got even better because of the amazing topping! A buttery, brown sugary, crunch that’s irresistible! Easy and you can pre-assemble to save time! 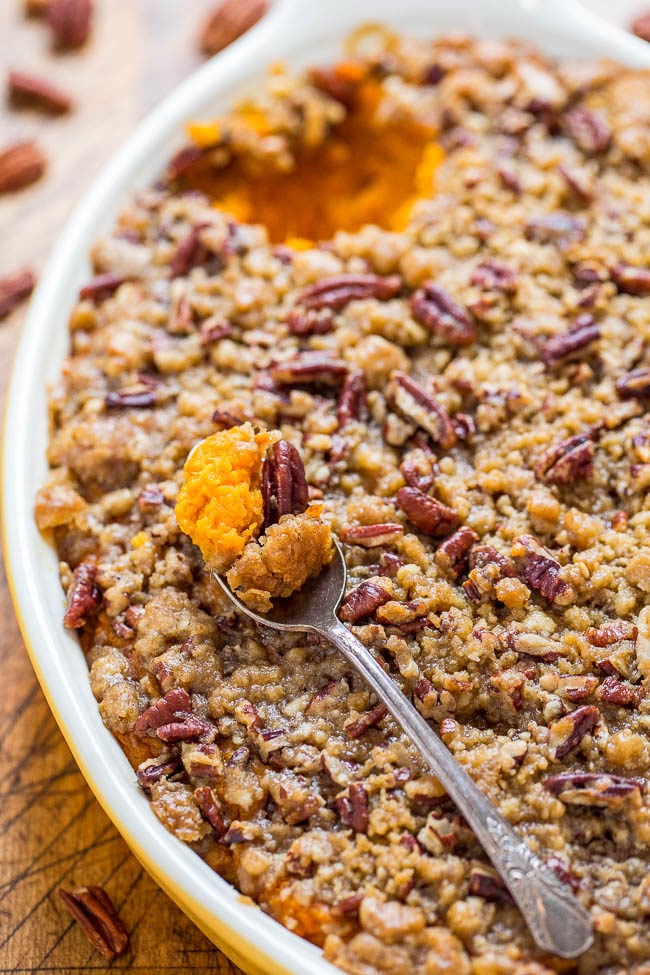 Roasted Rainbow Carrots — Lightly caramelized around the edges, crisp-tender in the center, and seasoned with rosemary, thyme, and parsley!! A trusty side that you’ll make again and again for holidays or easy weeknight dinners!! 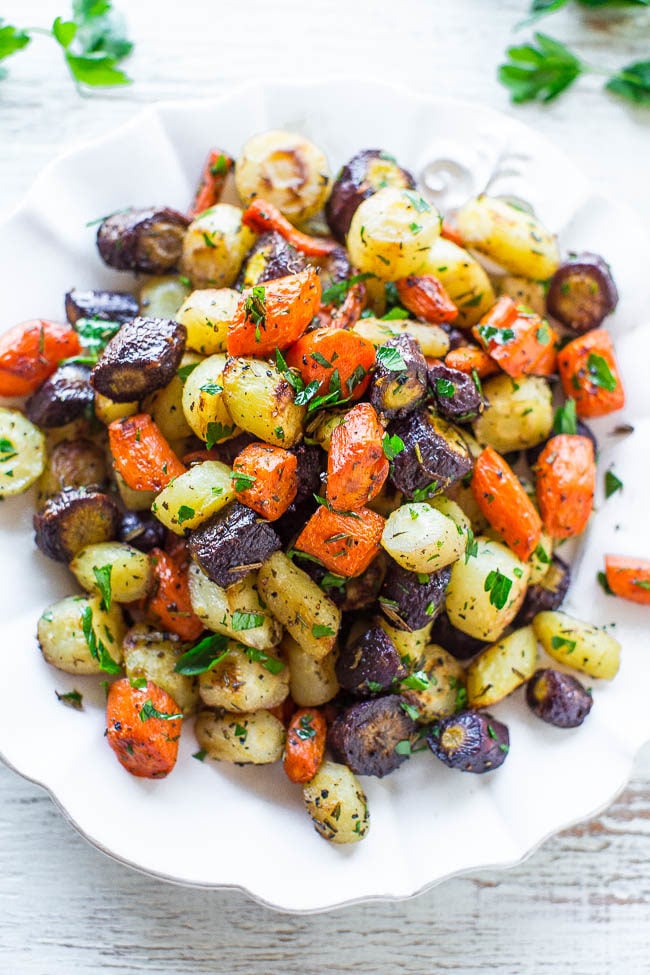 Honey Butter Pumpkin Dinner Rolls – Big, soft rolls brushed with honey butter are the best! Everyone loves them and they disappear so fast! 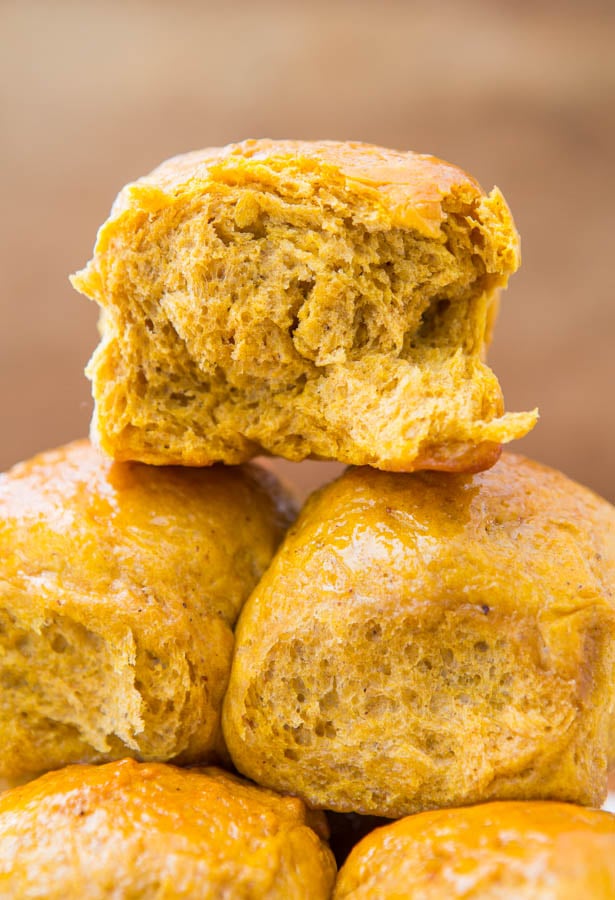 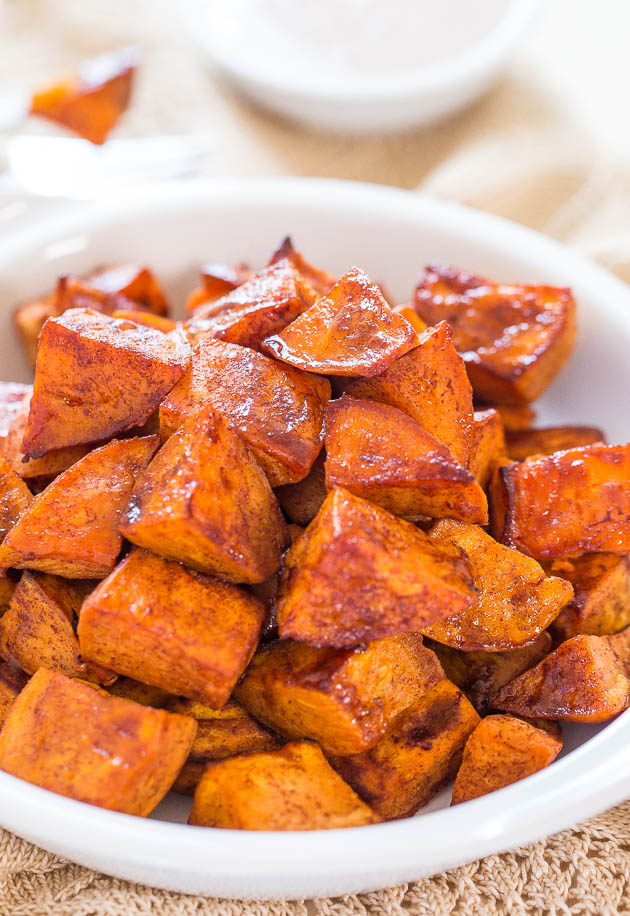